George Miller wrote this (badass) short version of the movie on a flight from LA to Australia back in 1997. 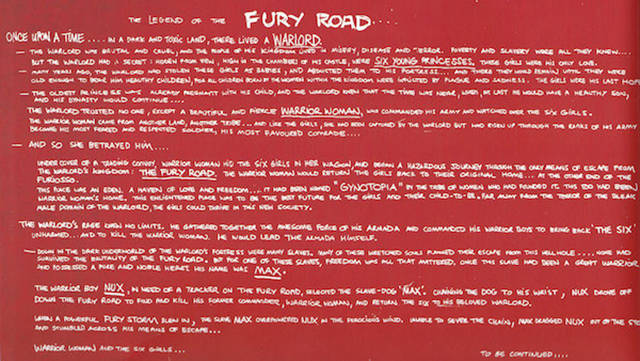 According to Miller, the film’s storyboard was made even before the screenplay. The reason behind that was because Miller envisioned the film as a continuous chase, with little dialogue and focusing on the visuals. The storyboard was made with the collaboration of five artists and had about 3,500 panels. 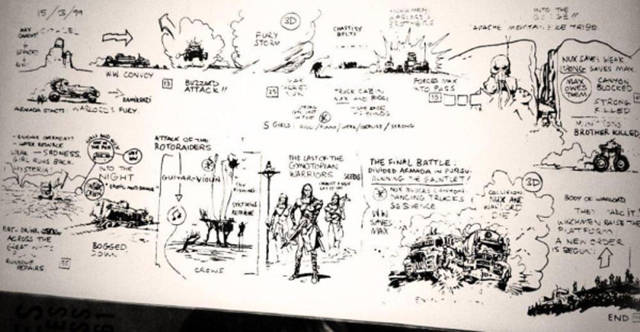 Over 80% of the effects seen in the film are real practical effects, stunts, make-up and sets. 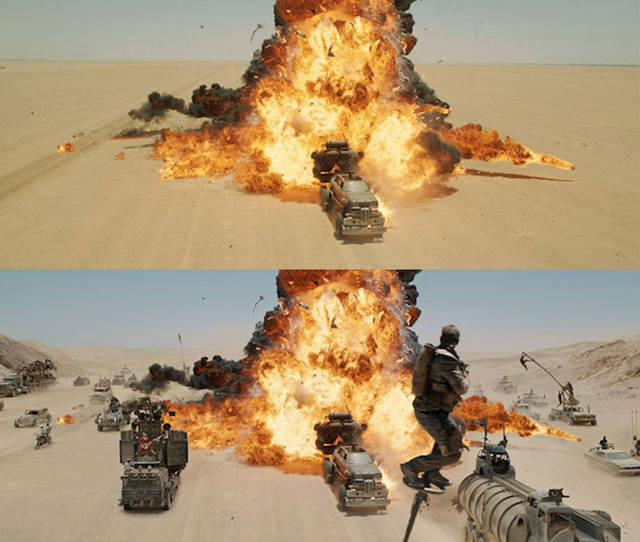 CGI was used sparingly mainly to enhance the Namibian landscape, remove stunt-rigging and for Charlize Theron’s left hand, which in the film was a prosthetic arm. 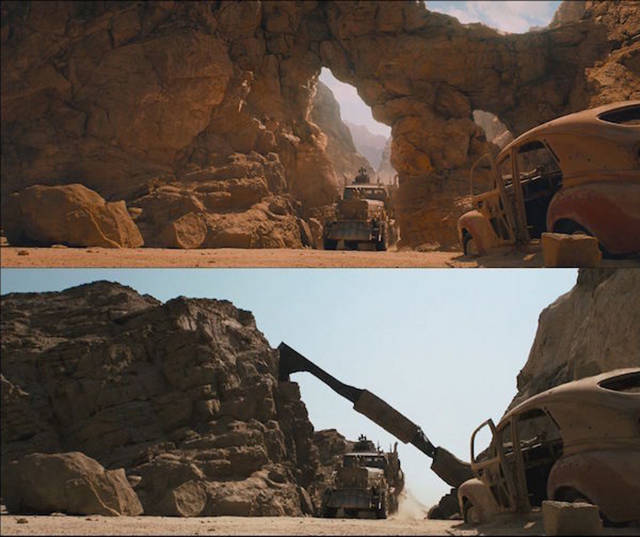 The flame-shooting guitarist is Australian artist/musician Sean Hape, better known as Iota. In an interview on Vice, he said the guitar weighed 132 pounds, and shot real gas-powered flames, which he controlled using the whammy bar. 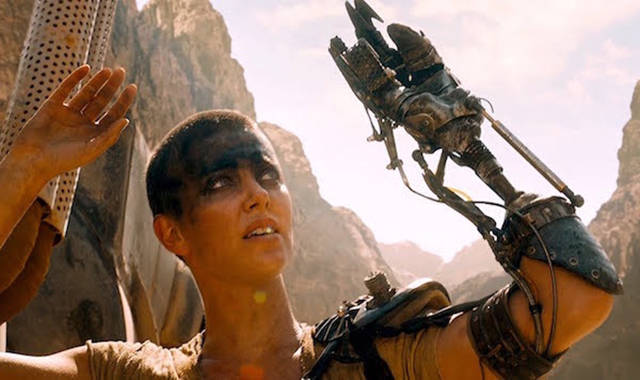 Charlize Theron reportedly shaved her head for the role of Furiosa and as a result had to wear a wig for her role in A Million Ways to Die in the West . 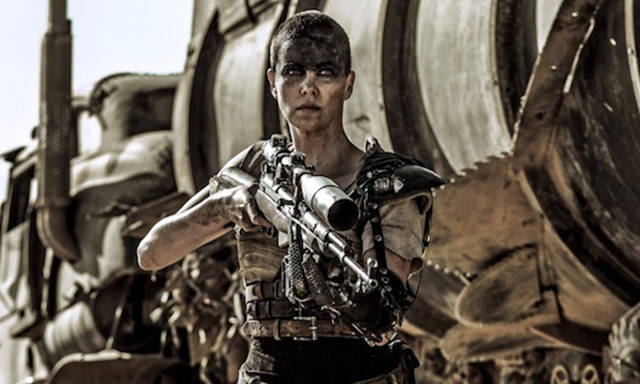 In creating the look of the film, director George Miller laid down two stipulations for the production to follow. Firstly, the cinematography would be as colorful as possible in order to differentiate the film from other post apocalyptic movies, which typically have bleak, desaturated colors. Secondly the art direction would be as beautiful as possible, as Miller reasoned that people living in the post-apocalypse would try to find whatever scraps of beauty they could in their meager environment. 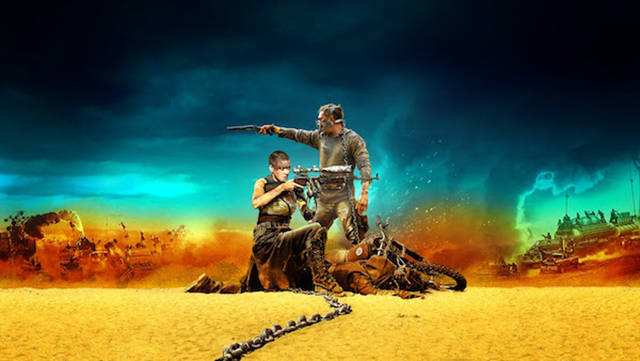 The jacket worn by Tom Hardy is a replica of the one worn by Mel Gibson in the other two movies of the original trilogy. The Gibson jacket was found in storage at Kennedy-Miller and copied heavily.

The script contains almost no profanities. Although, The Dag abuses Max by saying, “He’s a crazy smeg who eats schlanger.”

The portion of the blood-bag information tattoo being painfully needled into Max’s back at The Citadel completed before he escapes reads: 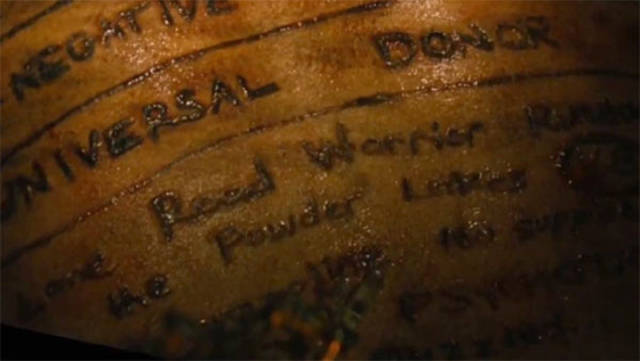 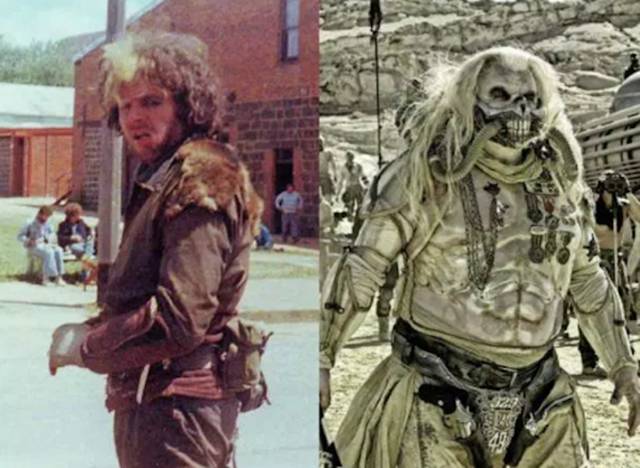 The breathing apparatus that Immortan Joe wears throughout the film is similar in shape and function to the mask Tom Hardy wore as Bane in The Dark Knight Rises (2012). The mask that Max wears during the first few scenes of the film is also reminiscent of this design. 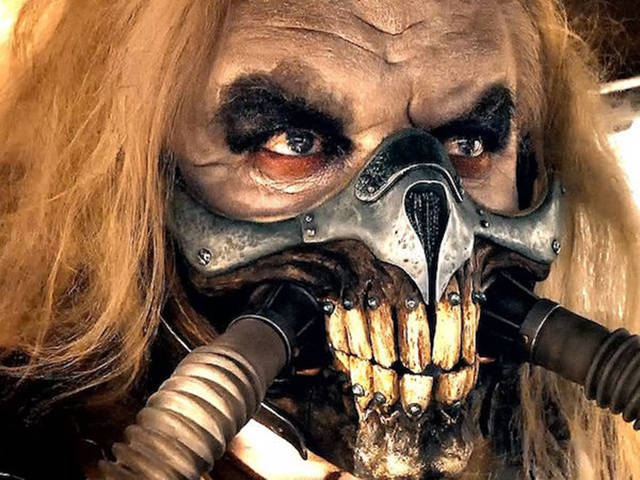 Max and the main antagonist, Immortal Joe, never directly interact with each other, apart from when Max hijacks the People Eater’s Limousine. They exchange gunshots during the takeover. 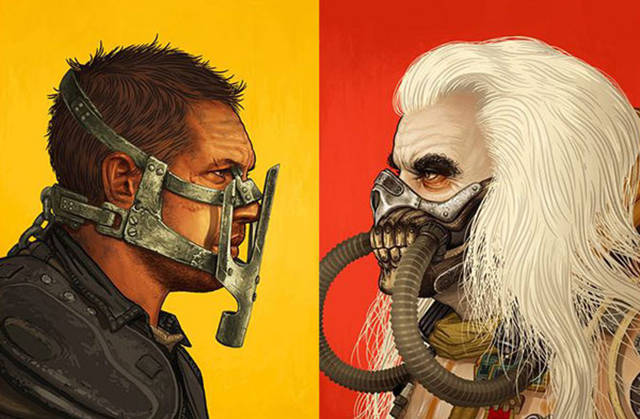 A comic book series showing how Immortal Joe came to power is being published by Vertigo. 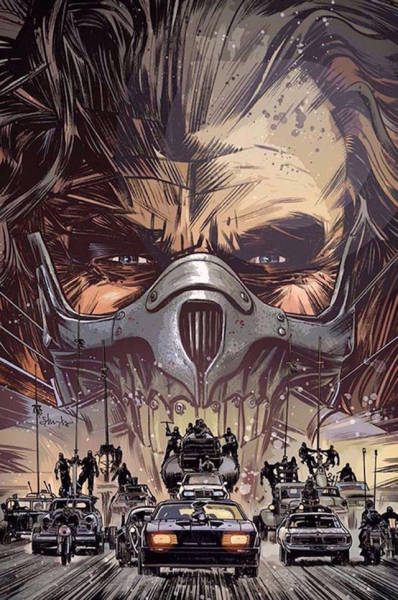 The silver spray the War Boys use is actually a cake-decorating color mist made by a company known as Wilton.

The film used three identical War Rigs, the large main truck in the film. They were based on a Czechoslovakian all-wheel drive military vehicle. 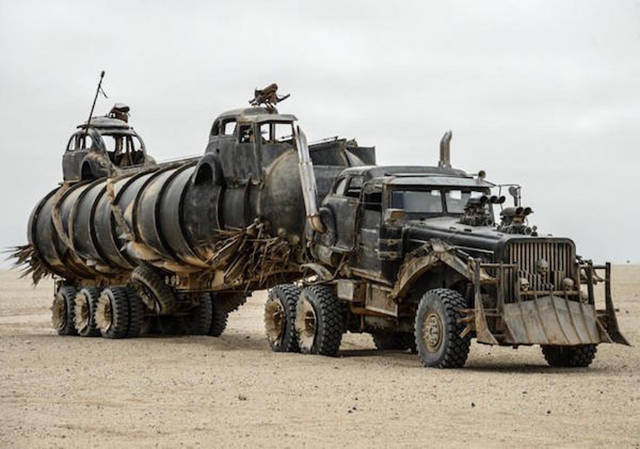 Tom Hardy suffered a broken nose during filming when Charlize Theron accidentally elbowed him. She was wearing a green cast at the time, which was used as a background for graphics artists to digitally remove Furiosa’s arm. 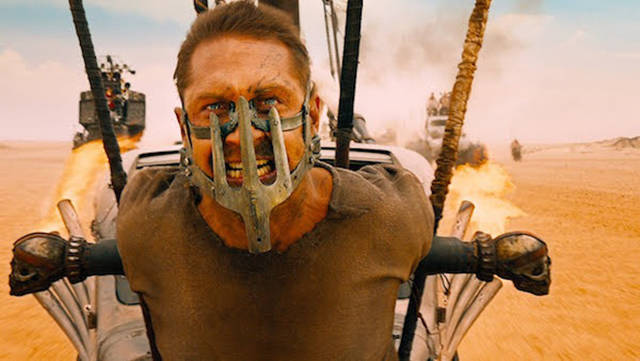 The girl who Max sees in his visions, commonly believed to be his daughter, is in fact Glory the Child, who can be seen in the comic series. It can also be noted that she is seen being run down in a desert by a selection of vehicles, while Max’s child was killed by a biker gang prior to the war. 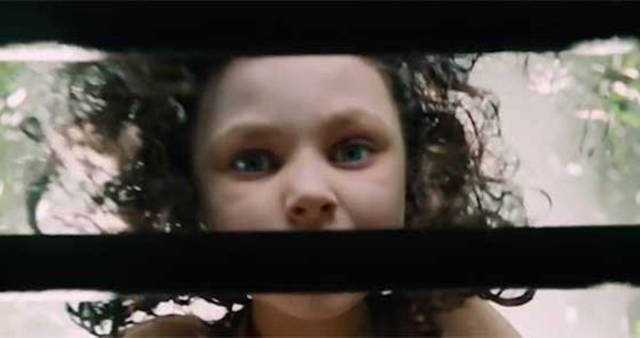 The gesture made by the war boys when they mesh their fingers together is the sign of the V8; they literally revere and worship the power of the engine. It may also be viewed as a reference to Valhalla. 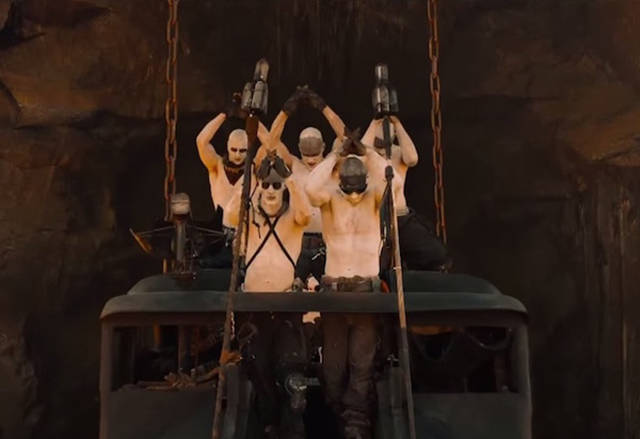 According to Rosie Huntington-Whiteley, whenever she or the other Wives’ clothes slipped, Tom Hardy would never tell them directly, instead he would act out a cartoonish eye-popping-out action to let them know. 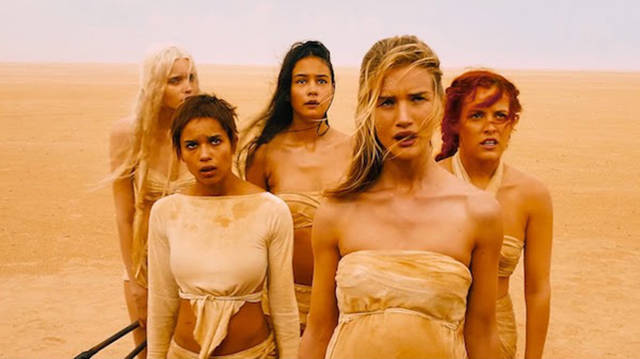 As in the previous movies in this series, many characters’ names are never said in full or at all onscreen and are only provided in the credits. 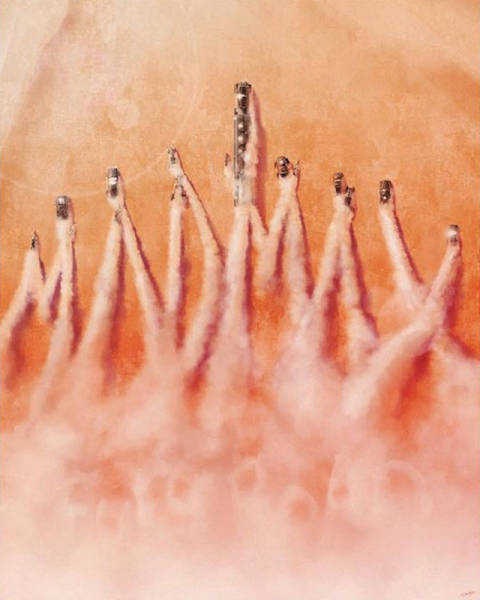 According to Tom Hardy, he had lunch with Mel Gibson to discuss him taking over the iconic role of Max Rockatansky. Gibson told him that he was fine with it, and gave Hardy his blessing. 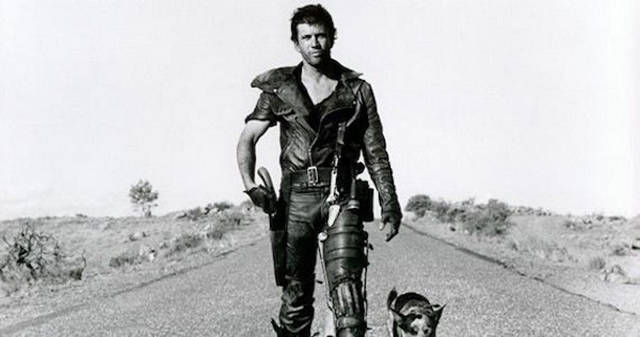 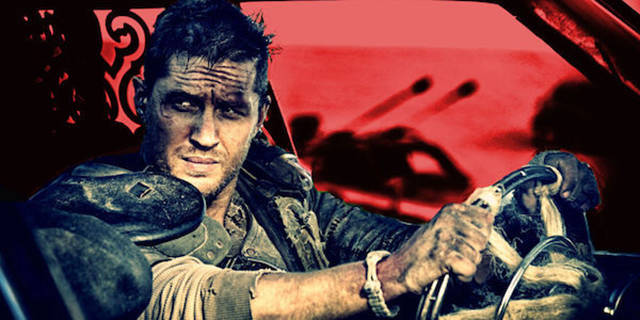