British tobacco company Gallaher’s Cigarettes started to print these useful tips on the cards, put in cigarette packets to keep them from bending, in 1910. They quickly became very popular among people and turned into collectible items.

Keep your glasses from getting foggy. 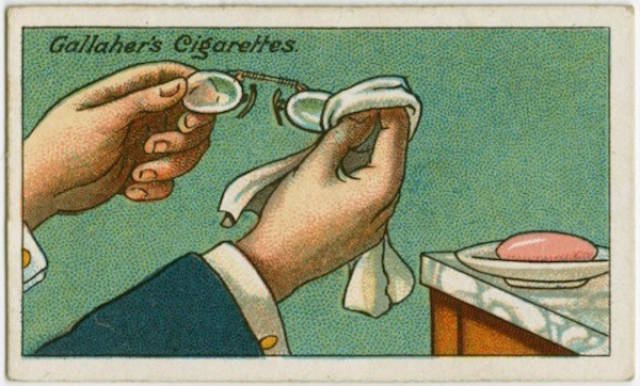 “The moisture which collects on eyeglasses causes a great deal of trouble, but if the glasses are daily rubbed with soap and well polished afterwards, a very thin, invisible film of soap remains, which has the effect of preventing the condensation of moisture on the glass.” 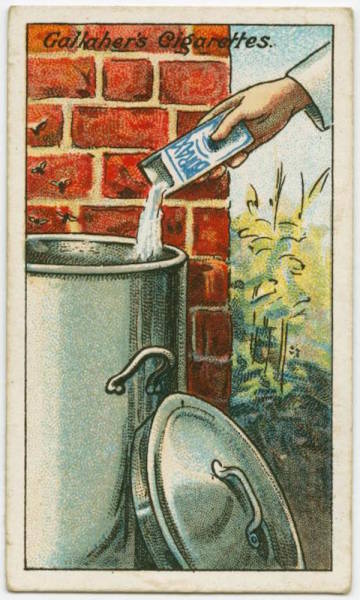 “As the result of experiments it has been found that a small amount of ordinary Borax sprinkled daily in the dustbin, which is one of their favorite haunts, will put a stop to the breeding of [flies].”

Get loose shoes to fit better. 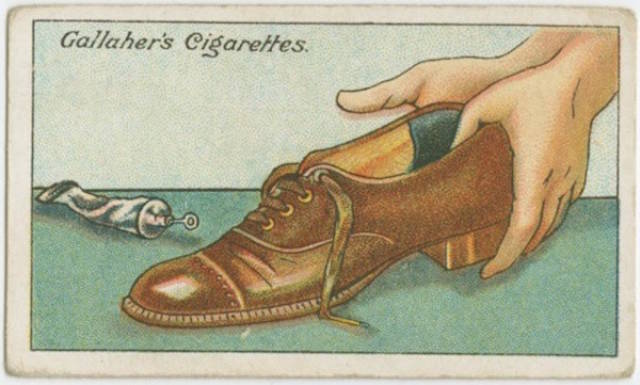 “A pair of loose shoes can be made to fit comfortably by fixing (with seccotine) a piece of velvet or velveteen inside the heel as shown in the picture. Care must be taken to see that no wrinkles are left in the velvet.” 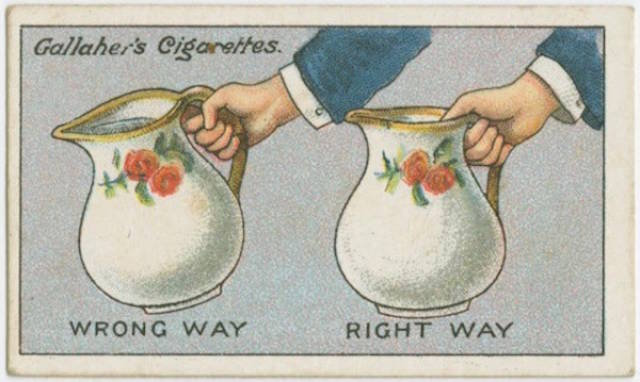 “The correct way to hold the jug is shown in the right-hand sketch. This prevents the weight from pulling the jug down and so spilling what it contains, as is likely to happen if carried the other way.”

Learn the right way to bandage a foot. 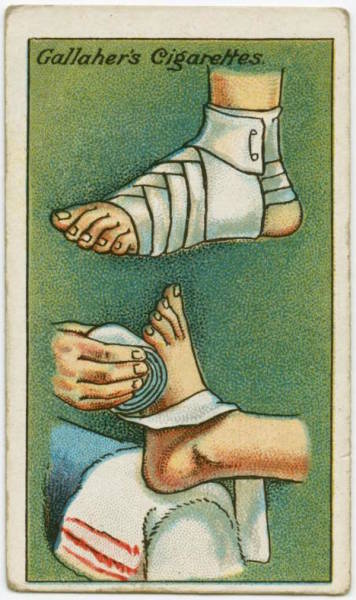 “Rest injured foot on operator’s knee on a clean towel. Commence bandaging in manner shown by the lower diagram, the bandage being bound over and round the back of the foot in a spiral fashion, and eventually affixed by a safety pin, just beneath the ankle as shown in the upper illustration.”

They also show you how to properly treat a sprain. 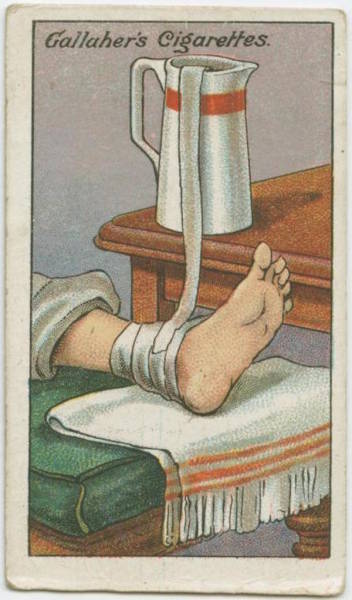 “Elevate the injured joint and wrap in cloths wrung out in cold water. The picture shows how to keep the cloths constantly wet without having to change them. A jug of water [is] placed higher than [the] injured limb, and a strip of linen with one end in the jug and the other end resting upon the wrapping of the sprained joint, is all that is necessary. The water will pass from jug to compress by way of the linen strip.”

Did you know you that you can clean an oil painting with a cut potato? 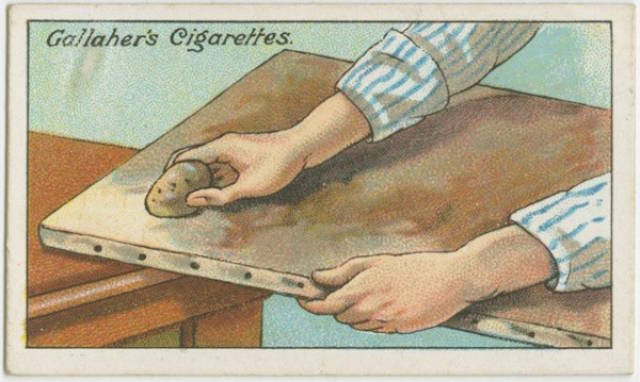 “The picture should first be well dusted and then rubbed gently with the flat surface of a cut raw potato, the lather being wiped away with a soft rag. The dirty part of the potato must be constantly pared off in order to keep clean the surface applied to the picture. Finish off with a rub of pure linseed oil.” 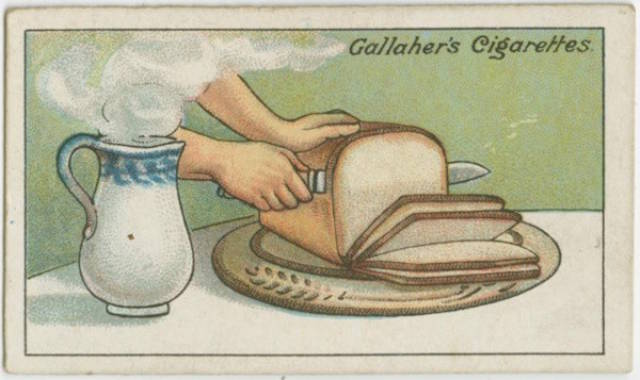 “Plunge the bread knife into hot water and when thoroughly hot, wipe quickly. It will be found that the heated knife will cut soft, yielding new bread into the thinnest slices.”

Keep your expensive vases safe by weighting them down. 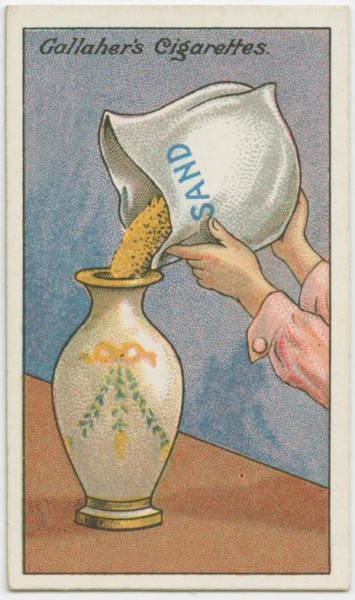 “Partly fill the vase with sand, which, acting as a weight, keeps it upright and firm on its base. This idea is particularly useful in the case of vases which are inclined to be top-heavy.”

The best way to clean up broken glass. 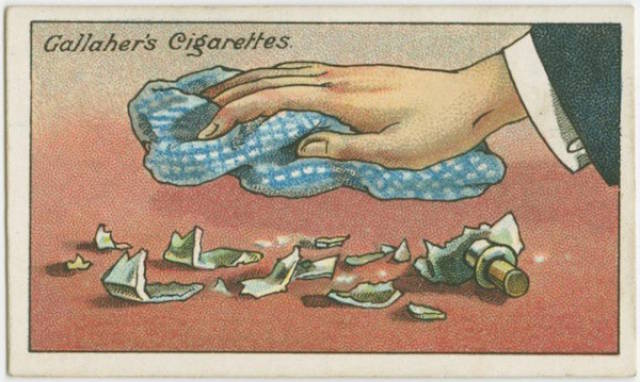 “To pick up broken glass quickly and cleanly, a soft damp cloth will be found to be most effective, for it takes up the small splinters. The best plan is to use an old rag that can be thrown away with the glass.”

How to get a tight ring off your finger. 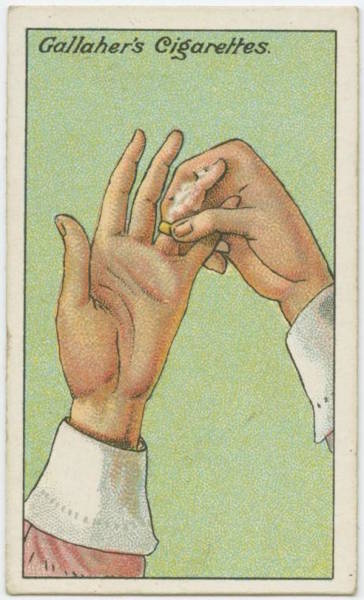 “To remove a tight ring from the finger, the finger should first be well lathered with soap. It will then be found that, unless the joints are swollen, the ring can easily be taken off. If, however, the finger and joints are much swollen, a visit to the jeweler is advisable.”

Increase your breathing capacity with this simple exercise! 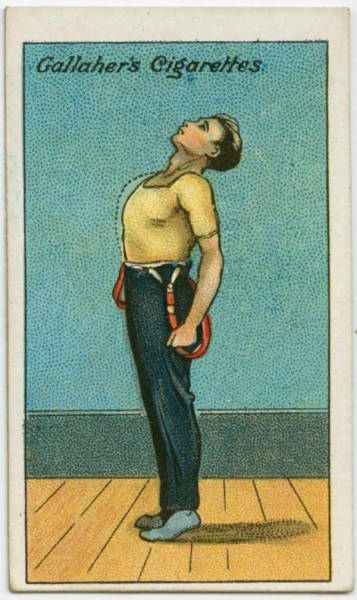 “Stand erect on the balls of the feet with the head held well back. Then inhale deeply until the lungs are fully inflated, gradually exhale, allowing the chest to sink first, followed by the lungs. Repeat exercise several times both morning and evening.”

How to test a lobster’s freshness. 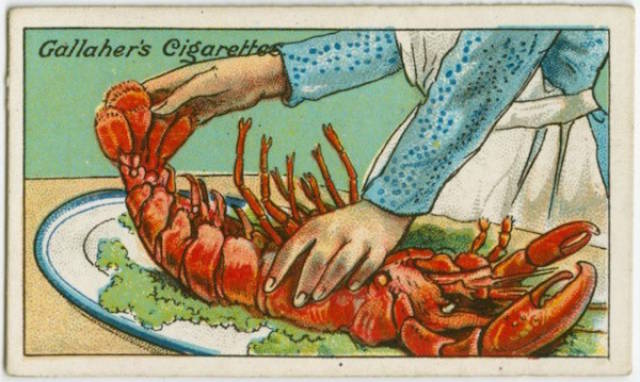 “If, when buying a boiled lobster, you are in doubt as to its freshness, just pull back the tail, then suddenly release it; if the tail flies back with a snap, the lobster is quite fresh, but if it goes back slowly, you may be pretty sure the lobster has been boiled and kept for some days.”

Got a cracked egg? Don’t worry. You can still boil it. 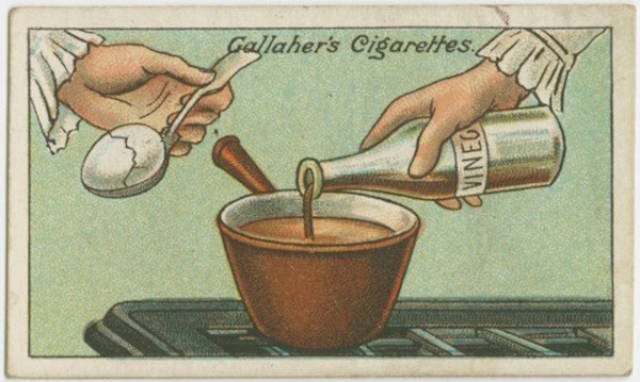 “To boil cracked eggs as satisfactorily as though they were undamaged, a little vinegar should be added to the water. If this is done, it will be found that none of the contents will boil out.”

Separate two glasses that have gotten stuck together. 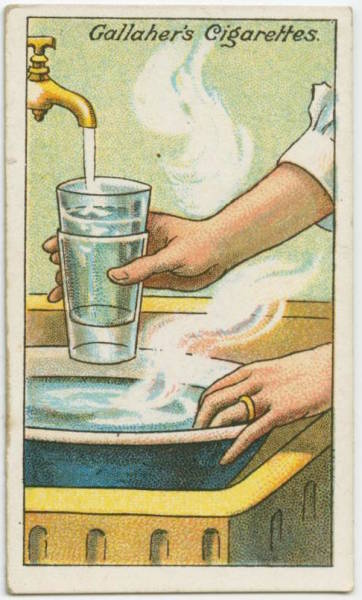 “When two glass tumblers stick together, there is a danger of breakage in trying to separate them. The simplest and most effective method of releasing the glasses is to put cold water in the upper one and place the lower one in warm water. They will be found to separate at once.”

Test your hotel bed for dampness. 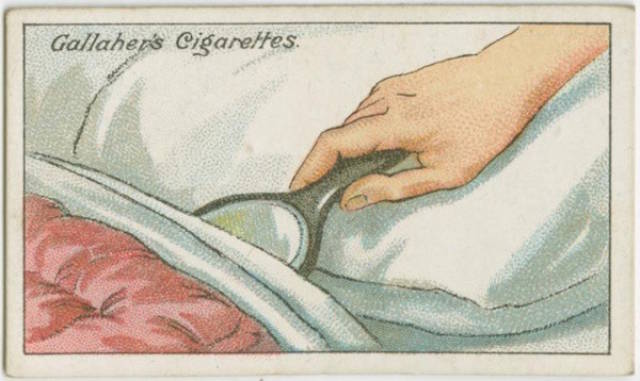 “In order to detect dampness in a strange bed and so be warned of the danger, a small hand mirror should be slipped between the sheets and left for a few minutes. Any moistness or blurred appearance of the mirror’s surface when withdrawn is an indication of dampness and the bed should not be slept in.”

Want to draw a perfect ellipses? Gallaher’s has you covered. 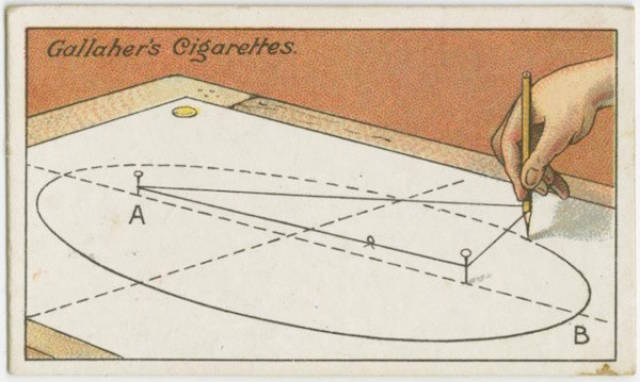 “Size of the ellipse having been determined, focuses are found by measuring off the short diameter (or width of the ellipse) from the ends of the long diameter (or length). Two pins should be fixed, and string or thread looped round as shown in the picture. Length of loop should be from A to B.”

Here’s how to safely pull out a long nail. 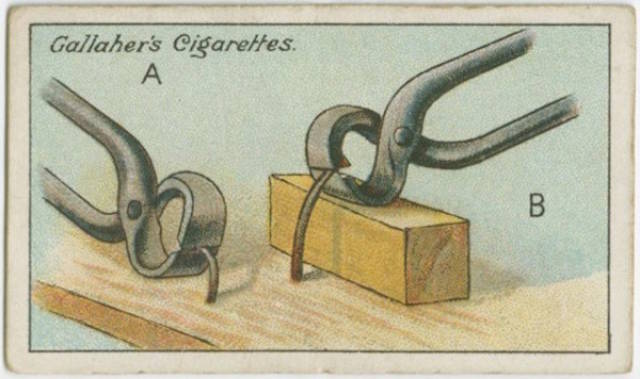 “It is often rather difficult to pull out a long nail from wood into which it has been driven, for when drawn out a short distance as in A, there is no purchase from which to pull it further. If, however, a small block of wood be placed under the pincers, as in B, the nail can be pulled right out without difficulty.”

Make your own homemade gate latch. 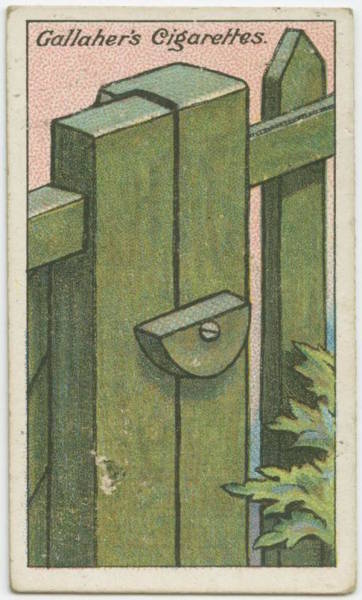 “The picture gives the shape of a latch which [does not allow the gate to swing open]. When screwed to the gate post, the latch will be found to swing in position to secure the gate, and the greatest weight of the latch is beneath the screw pivot.”

Turn your analog watch into a compass! 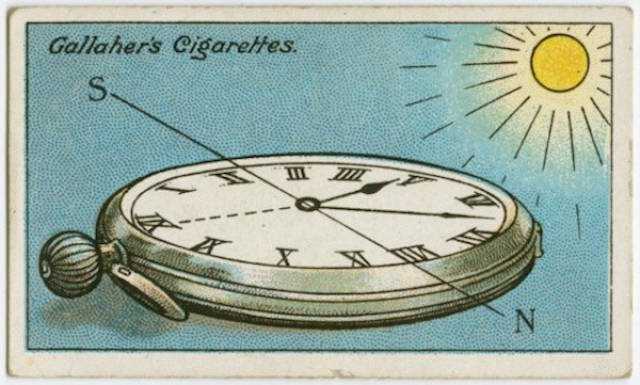 Get pesky saltwater stains out of your leather shoes. 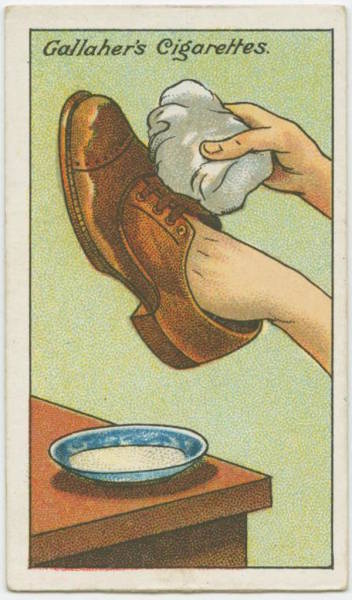 “Such stains can be removed by washing the shoes over with a preparation composed of a piece of washing soda about the size of a chestnut dissolved in two tablespoons of hot milk. When dry, the shoes should be polished in the ordinary way, and the stains will be found to have disappeared.” 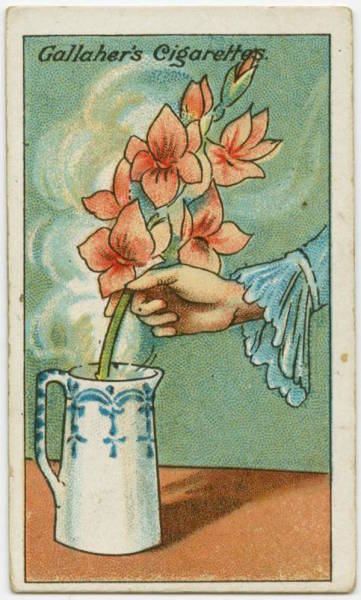 “To revive choice blooms that have faded during transit, plunge the stems into hot water, and allow them to remain until the water has cooled. By that time the flowers will have revived. The ends of the stems should then be cut off and the blossoms placed in cold water in the usual way.”

Get candles to fit into any holder. 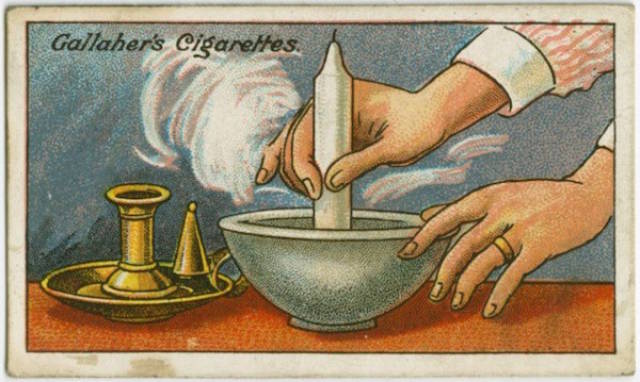 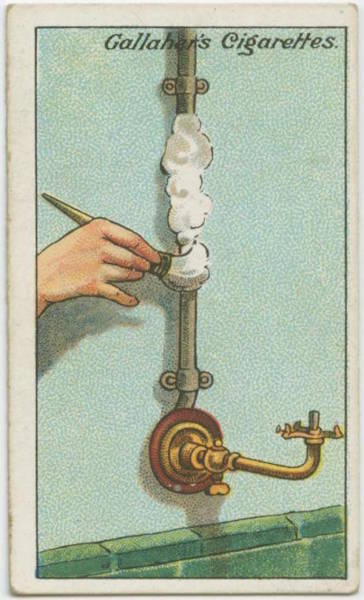 “Paint strong soap solution on the suspected length of pipe and the gas will then cause bubbles at the escaping point, which can be dealt with at once.”

The best way to keep a pot lid raised. 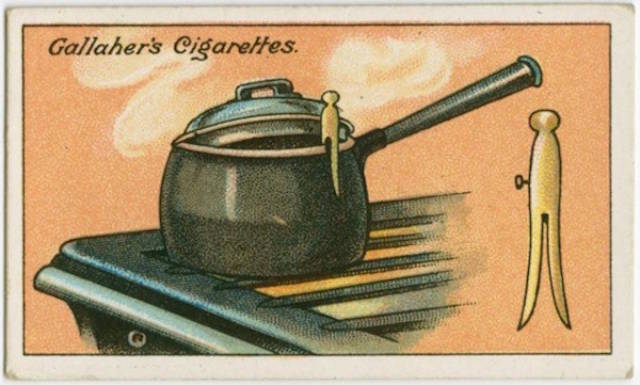 “Drive a tack into the top part of the [clothespin] and then fix the [pin] over the edge of the pan as if it were on the clothesline. The lid rests on the tack and is thus kept open.”

Learn to predict the day’s weather just by looking at the sky. 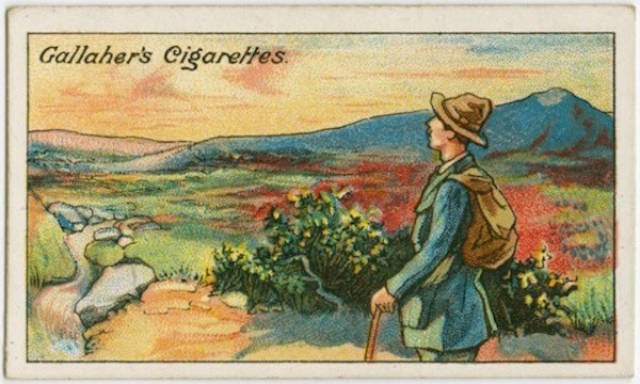 “The traveler, setting off in the early morning, will find a fairly sure guide as to the weather he is likely to encounter by watching a very small distant cloud. If the cloud grows gradually larger, then unsettled, rainy weather will probably come. But if the cloud decreases in size, the day should be a fine one.” 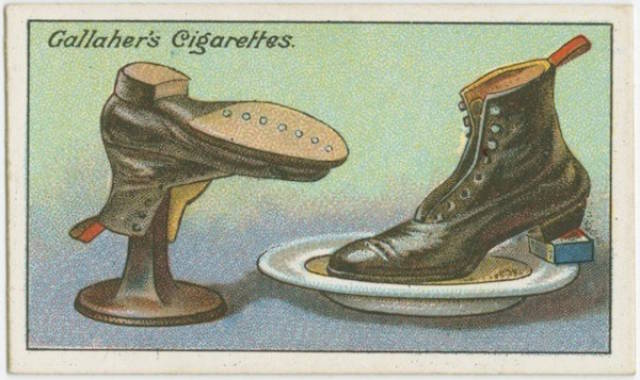 “When new boots make a squeaking noise, a good remedy is to drive several brads in the center of the sole. Another method is to place the sole in a dish or plate containing oil, the heel being propped up in order to immerse the whole of the sole, and the boot left until the oil has thoroughly soaked into the leather.”

Learn to start a fire without using wood. 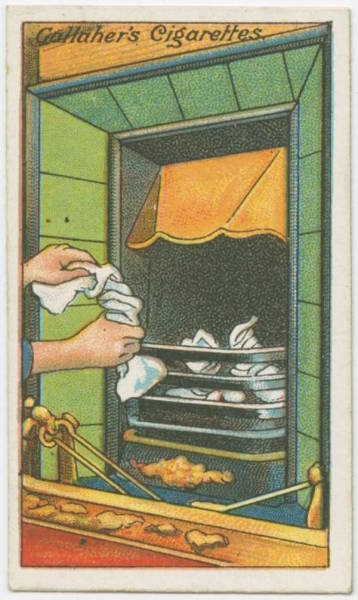 “A good substitute is to use pieces of paper screwed into twists as the picture shows. Two or three pieces of newspaper are quite sufficient to start a judiciously built coal fire.” 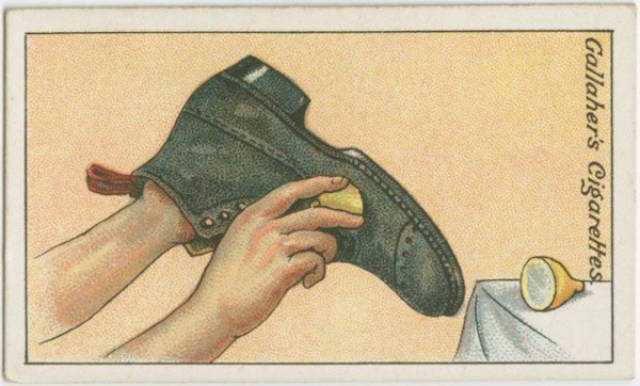 “A successful method is to rub the boots all over with half a lemon, allow them to dry, after which they will easily polish, although occasionally it may be found necessary to repeat the application of the lemon juice.”