ConsumerReports released their 10 top cars of 2016 on the market in America across 10 popular categories. They based their results on performance, reliability, safety, and owner satisfaction. Check them out. 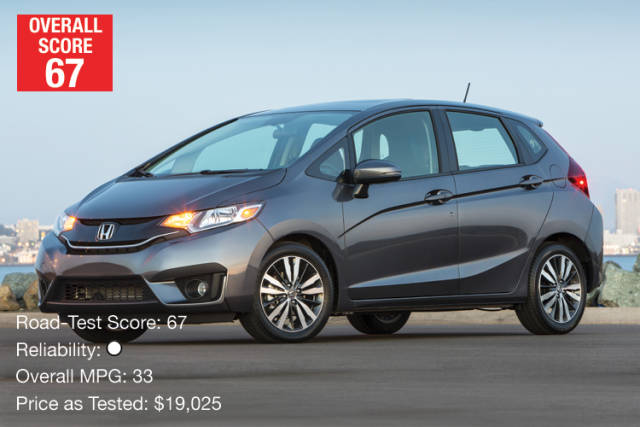 Why it's on the list: Although the publication criticized the Fit for its excessive road noise and harsh ride, Consumer Reports found the subcompact's great fuel economy, nimble handling, and great interior space to be truly impressive. 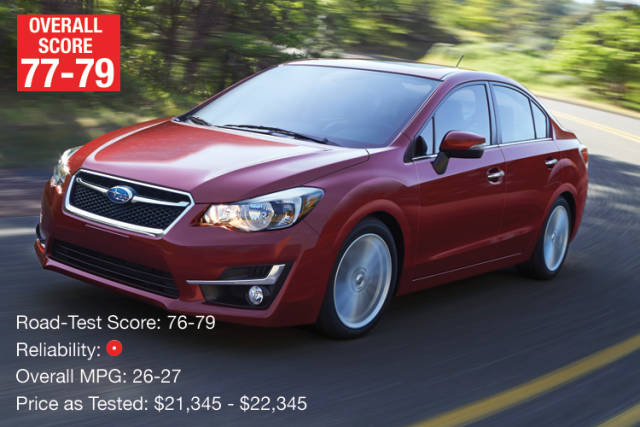 Why it's on the list: The Subaru Impreza is back on Consumer Reports' Top Picks list once again. So what did the publication like about the sedan?

Well, what didn't they like about the Impreza: Consumer Reports praised the Subaru for its ride, handling, interior space, intuitive controls, safety tech, great crash-test results, its all-wheel-drive system, and the cargo-hauling ability of its hatchback variant. 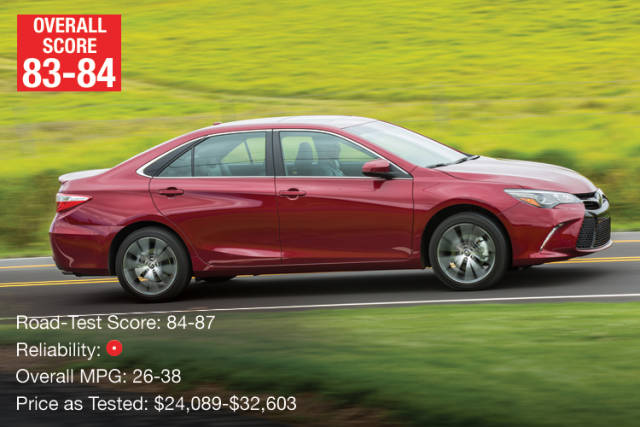 Why it's on the list: The Toyota Camry has long been one of America's most popular and trusted family sedans. And the latest generation is no different.

"The solid Camry delivers year after year of outstanding reliability, which when combined with impressive crash-tests results, make it a near-perfect sedan," Consumer Reports wrote. 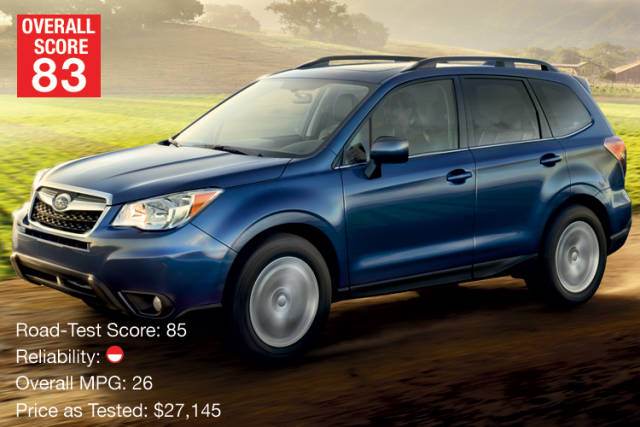 Why it's on the list: The Subaru Forester is back once again on CR's Top Picks list. The small crossover SUV is praised for its stellar all-wheel-drive system, roomy interior, comfortable ride, and great driving dynamics. 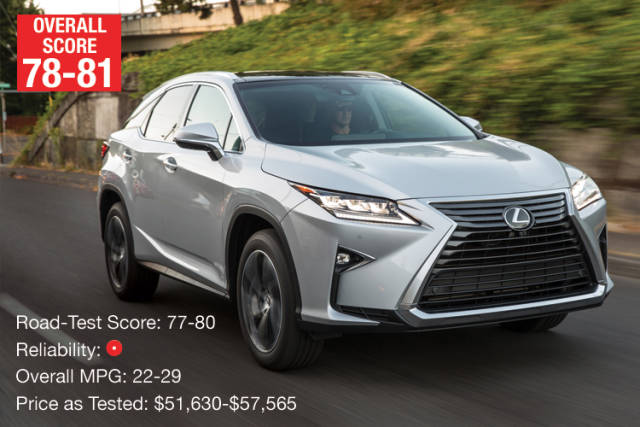 Why it's on the list: The Lexus RX has reigned supreme over the luxury-midsize-SUV segment for two decades. And that dominance doesn't seem to be coming to an end.

Consumer Reports praised the Lexus for its "quiet and comfortable cabin, effortless power delivery, a smooth ride, and a tastefully done interior fit and finish." 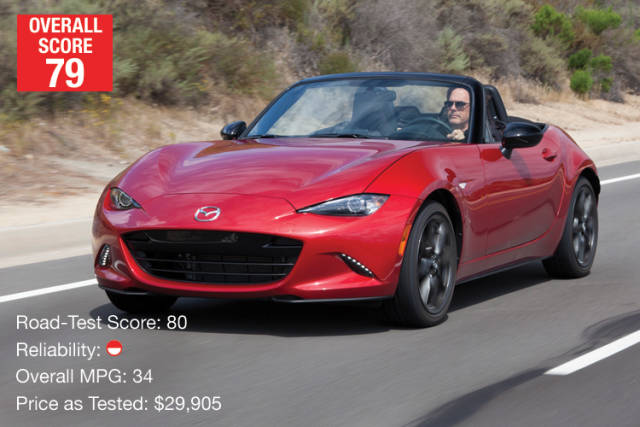 Why it's on the list: The Mazda MX-5 Miata is the best-selling roadster of all-time. While all four generations of the Miata have been fantastic, the current version is particularly well received by Consumer Reports.

"The MX-5 Miata combines lithe, precise handling with a crisp manual stick and a zoomy engine—that gets an enviable 34 mpg—to create the perfect car for the enthusiast driver and weekend racer," the publication wrote. 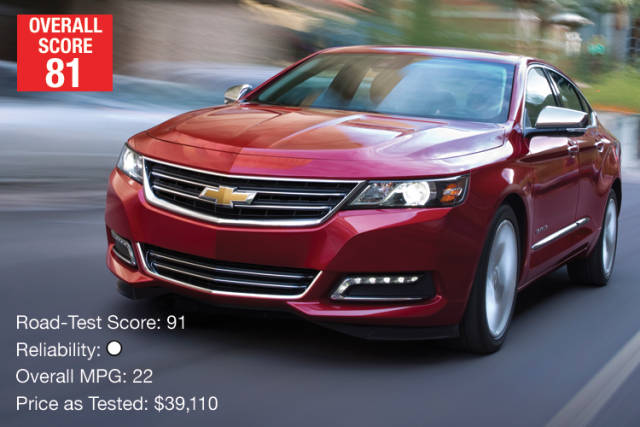 Why it's on the list: The Chevrolet Impala is another holdover from last year's Top Picks list. And the impressive Chevy is here for good reason.

"The Impala is dynamic and comfortable, combining a cushy ride with responsive handling, beating some elite luxury sedans at their own game," Consumer Reports wrote. 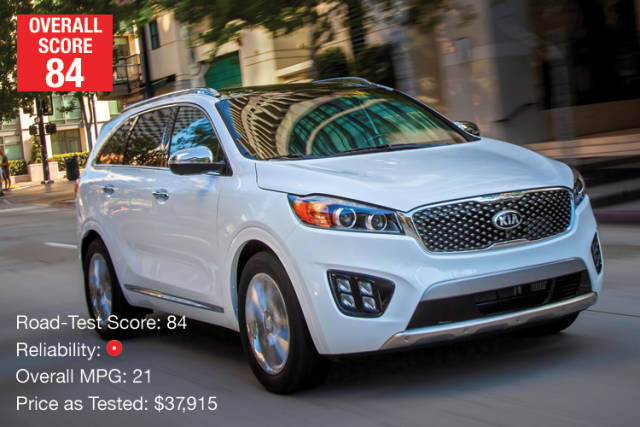 Why it's on the list: The Kia Sorrento is a rising star in the midsize-SUV market. Although it's often overshadowed by its more established competitors, the Korean crossover impressed the publication with its ability to put midsize space and features in a smaller package.

"The Sorento is a great SUV hiding in plain sight. It offers class-above elegance at mainstream prices," Consumer Reports wrote. 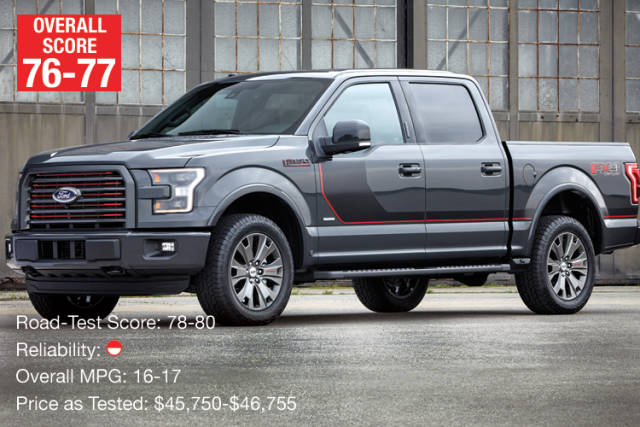 Why it's on the list: Consumer Reports praised the Ford F-150 for its lighter-weight aluminum construction and the resulting uptick in fuel economy and improved off-the-line performance.

Furthermore, the publication was impressed by the Ford's roomy and quiet cabin as well as the new Ford Sync3 infotainment system. In addition, Consumer Reports says that the F-150 has the best predicted reliability of any domestic truck. 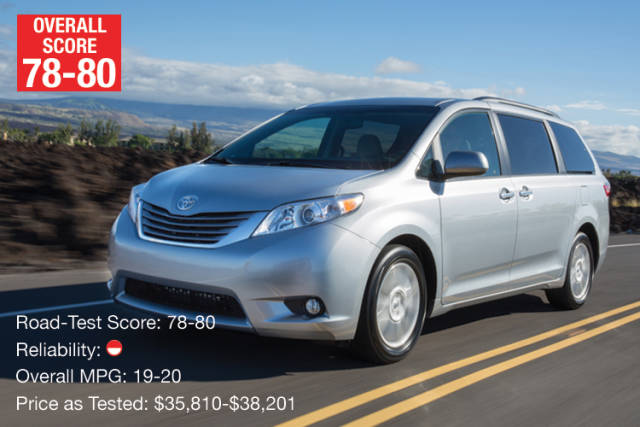 Why it's on the list: The Toyota Sienna has been one of the leaders in the minivan segment since it debuted in 1998. The publication was impressed by the Toyota's multifunctional interior, "magic carpet" ride, energetic powertrain, and room for eight.

"The Sienna is super-reliable transport with all of the modern features an active, connected family would want," Consumer Reports wrote.