Easy Guide To Make Your Own Lightsaber At Home (18 pics)

With the right materials and this step-by-step guide, you won’t have a problem to make your own lightsaber that’ll be strong enough to fight with. 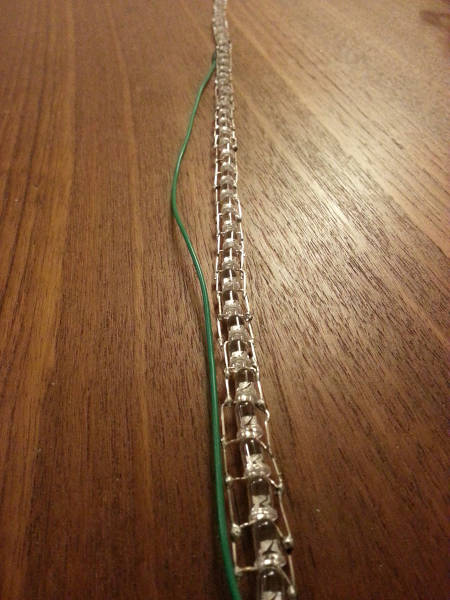 *WARNING* This design will "Go out in a blaze of burning LED glory" after extended use! I will address this problem! *WARNING* I soldered these together after bending each of them to my liking.

The diodes can be found here

Each need 3,2 - 3,4 volts, so the smartest move was making this into 2 parts consisting of 55 LEDs each, those two set in series.

EDIT: Remade it to 4 parts LEDs and 4 batteries. 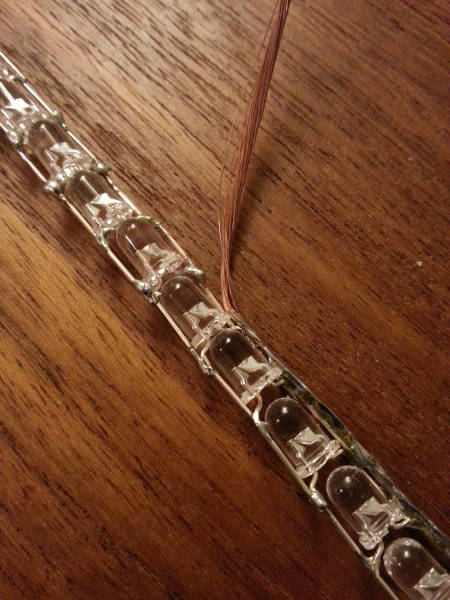 The solder broke after I tried fighting the wall. I'll just make it tougher, like so. FUCK It broke again. I guess I should solder BOTH sides. . . . 45 min after: SUCCESS! SUCK IT WALL! 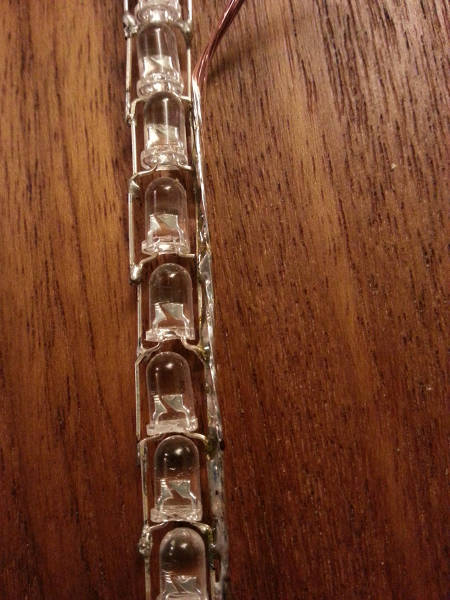 So, to make this run off four 3,6V batteries, I needed to make some changes. The batteries are in series, supplying 14,4V in total. If the LEDs where solded and switch on as it looks now, they would fry as their working voltage is at 3,2V Therefore, the one 110 pieces long 'strip' was split into four, each consisting of 26 LEDs.

wire #1LEDs negative side to #2 LEDs positive side

wire #2 LEDs negative side to #3 LEDs positive side

wire #3 LEDs negative side to #4 LEDs positive side.

Add a second wire to #4 LEDs negative side, and take it to the supply. 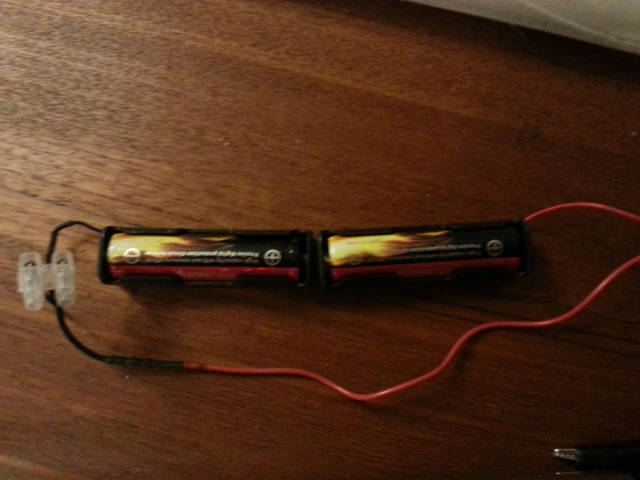 EDIT: Gone from using 2 to using 4. The holsters can no longer fit inside the tube, so I used another type of batteries called CR123A 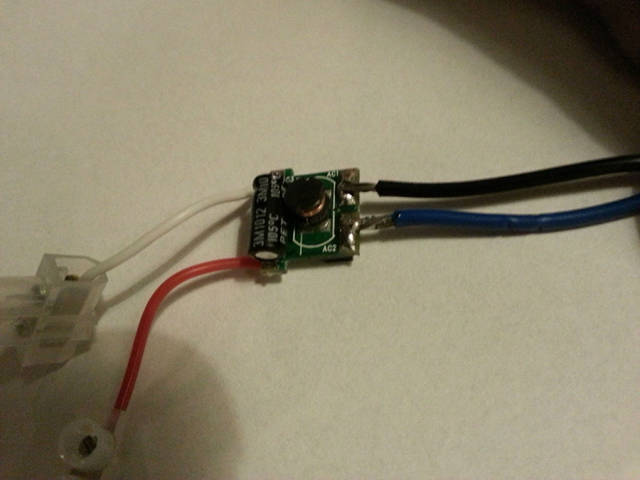 The Diodes each have a drain of 20mA, and with four batteries and four strips of diodes, each strip will receive 350mA. each strip have ~26 diodes, so each will receive about 14mA. This ensures the system will not suffer a terminal meltdown. sadly, it won't fix the "Blazing LED death" problem I warned about earlier. This will be fixed in future updates. 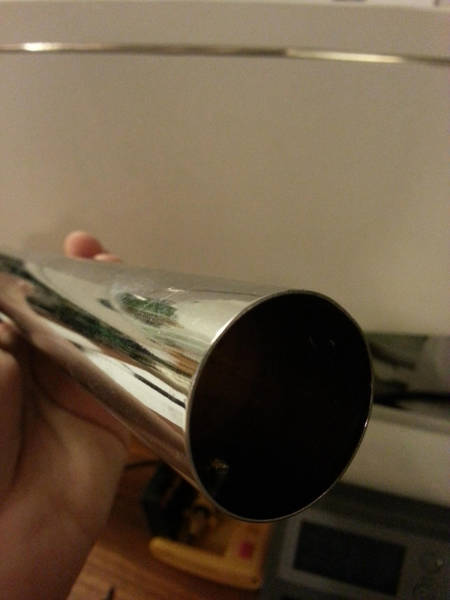 It's 30mm inside diameter, and it had to be long enough for the batteries AND the edge. 250mm Long. Its originally used for a bathroom sink, I got it in a shop which sells such things. 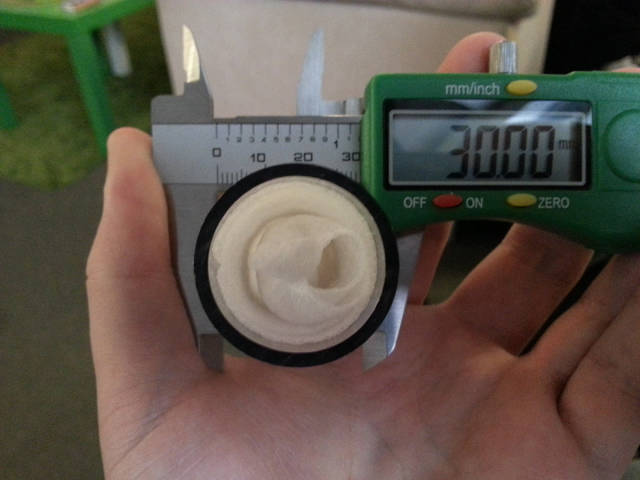 it's 30mm, and 2.5mm thick. This sucker can take a beating! Material is Polykarbonat, for ductility. (//www.cdplast.dk/ Danish site, I had to go there in person) It's 1000mm long, or 1 meter for non-engineers. (3 feet and a quarter, for americans)

The white stuff you see is some sort of wrap the store used for shipping their items. it resembles foam-wrap, that is unfortunately the best description I can give of it. EDIT: A kind Redditor, jaywil85051, sent a link to what it is: //www.starboxes.com/foam-wrap-11612.html?gclid=CInjz-2Cv7oCFQ2g4AodLB8AMQ

When fighting strangers, the foam also functions as a shock absorber. 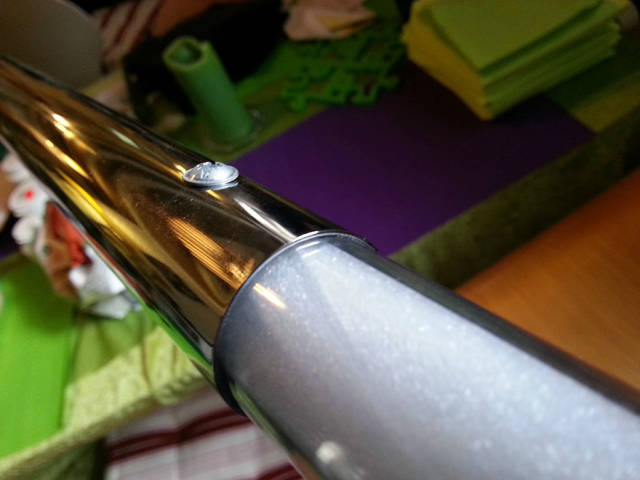 I used tape on the tube to make it a better fit, though the amount I used to fill the gab was small, the effect was great (it stopped wobbling)

Then drilled two holes 30mm down across from each other. I used a nail to puncture the hard steel surface, then used one of these to finish the job: //dx.com/p/electroplated-diamond-grinding-rod-set-30-pcs-239638

I connected the two sides with some spare parts I got from an Ikea furniture, but bolts and screws should work as a fine substitute. 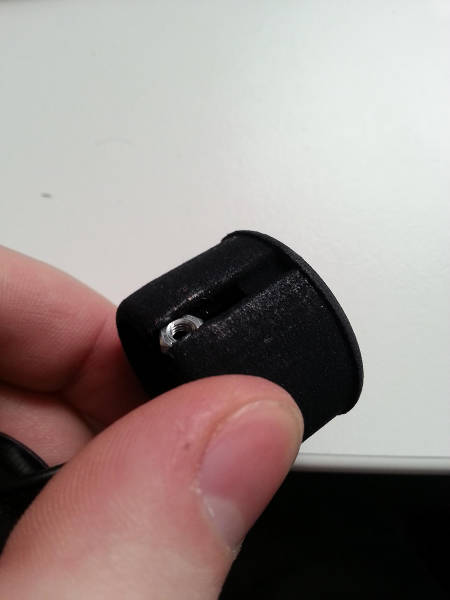 This is the button, which holds the switch.

Trying to save Materials 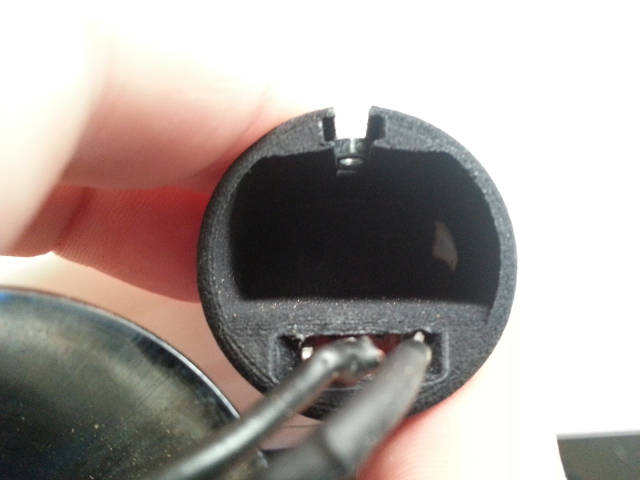 The nut is for securing the button 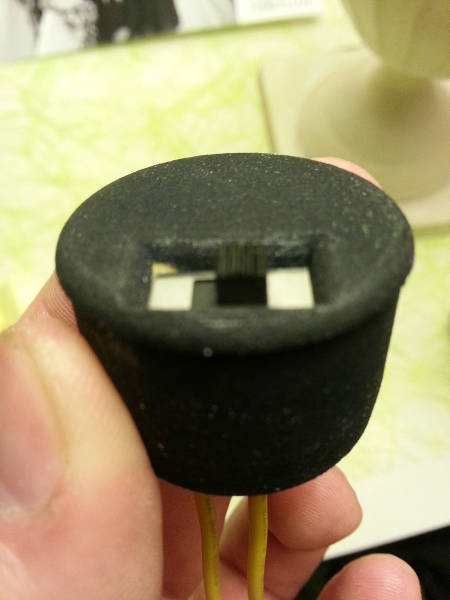 The switch is held in place by friction. 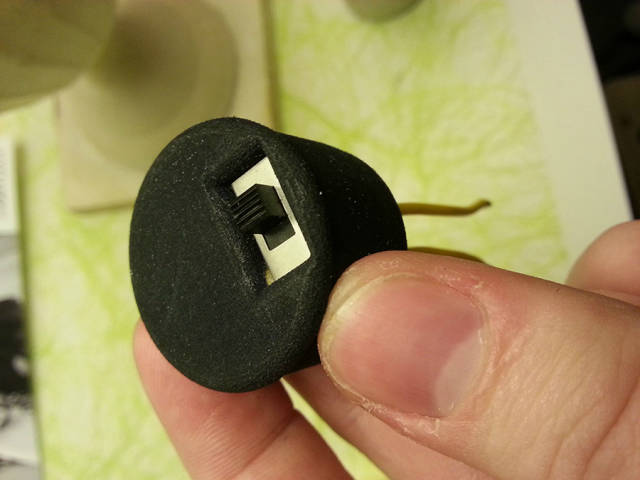 You gave me the Idea, its about 20% cooler now! Thanks! 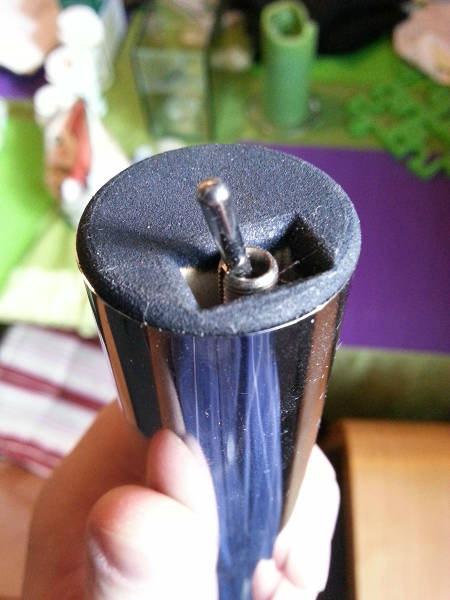 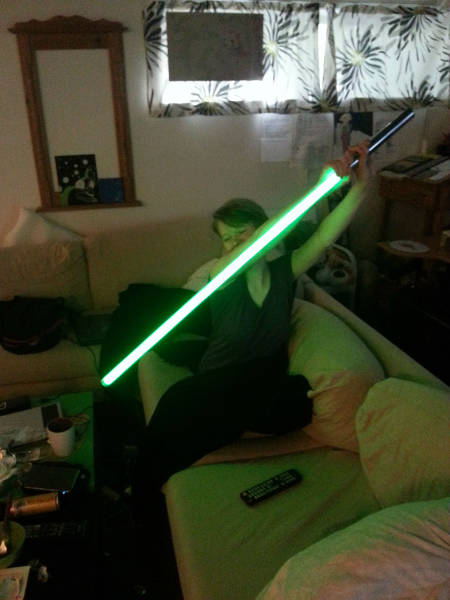 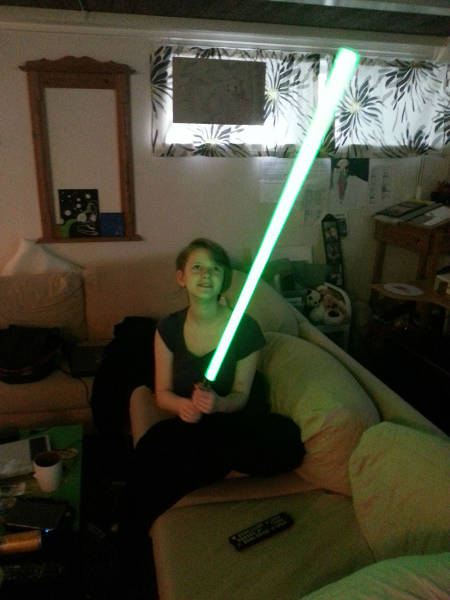 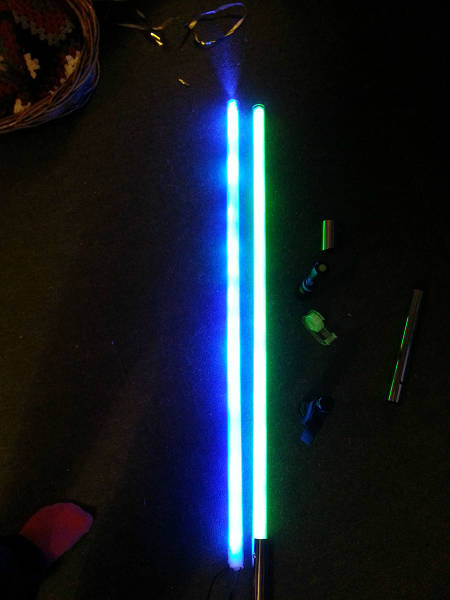 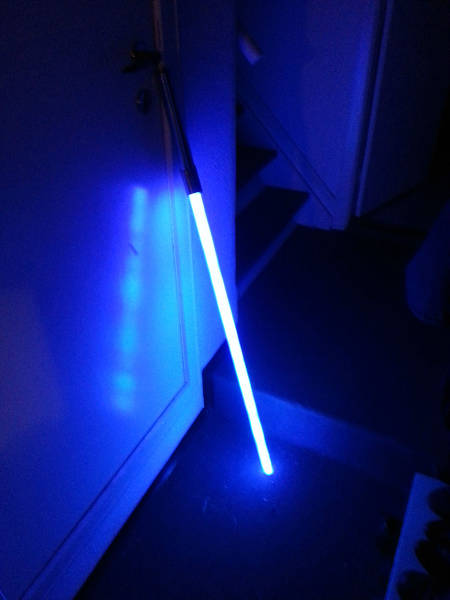 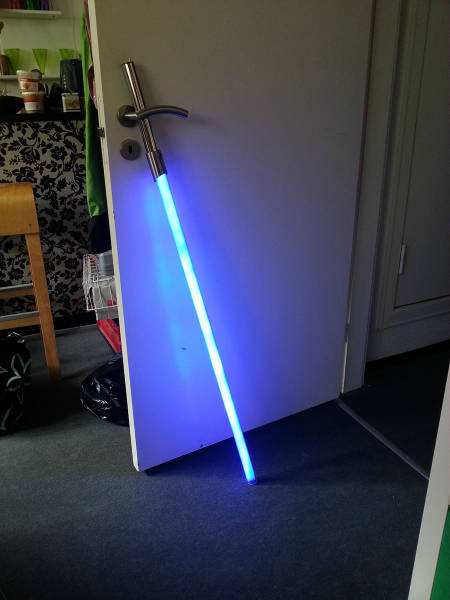