Jackpot Winners Who Lost It All (21 pics)

Winning a lottery is a thing many people dream of. But does it really change your life for the better? Check out how things can go horribly wrong once you win a jackpot.

Lara and Roger Griffiths bought their dream home ... and then life fell apart. 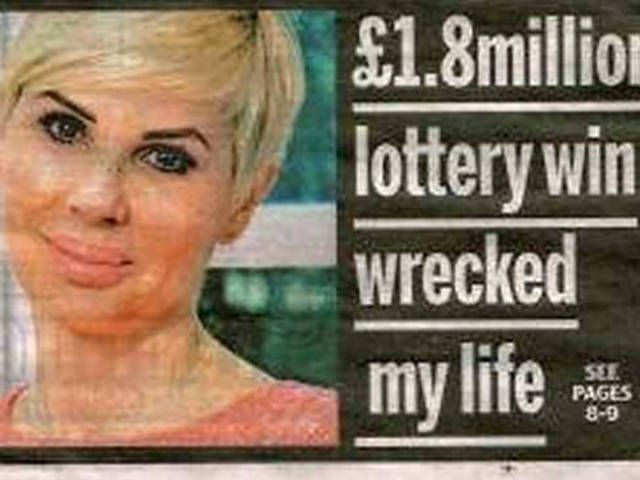 Before they won a $2.76 million lottery jackpot in 2005, Lara and Roger Griffiths hardly ever argued.

Then they won and bought a million-dollar house and a Porsche.

But six years after their win, Roger drove away in the Porsche after Lara confronted him over emails suggesting that he was interested in another woman.

Their 14-year marriage was over, a freak fire gutted their house, and every penny of their fortune was gone.

Bud Post lost $16.2 million within a nightmarish year — his own brother put out a hit on him. 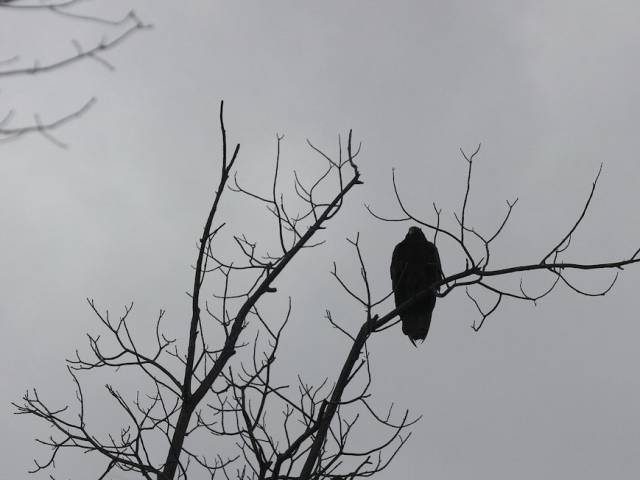 William "Bud" Post won $16.2 million in the Pennsylvania lottery in 1988 but was $1 million in debt within a year.

"I wish it never happened," Post said. "It was totally a nightmare."

A former girlfriend successfully sued him for a share of his winnings and his brother was arrested for hiring a hit man to kill him in the hopes that he'd inherit a share of the winnings.

After sinking money into various family businesses, Post sank into debt and spent time in jail for firing a gun over the head of a bill collector.

Bud now lives quietly on $450 a month and food stamps.

Martyn and Kay Tott won a $5 million jackpot, but lost the ticket. 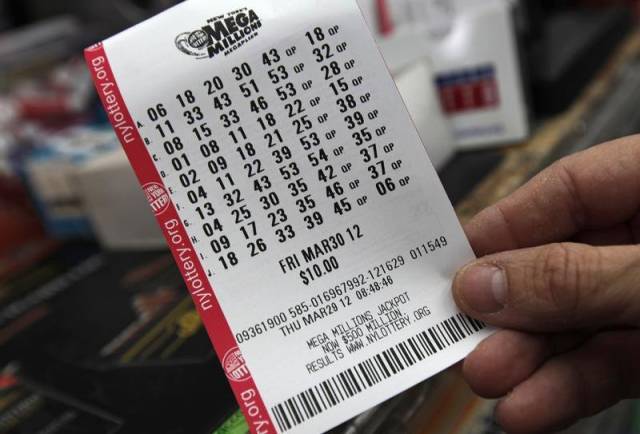 Martyn Tott, 33, and his 24-year-old wife from the UK missed out on a $5 million lottery fortune after losing their ticket.

They were able to convince officials, but since there is a 30-day time limit on reporting lost tickets, the jackpot became the largest unclaimed amount since the lottery began in 1994.

"Thinking you're going to have all that money is really liberating. Having it taken away has the opposite effect," Kay Tott told The Daily Mail. "It drains the life from you and puts a terrible strain on your marriage. It was the cruelest torture imaginable."

Sharon Tirabassi is back in the working class after winning $10 million. 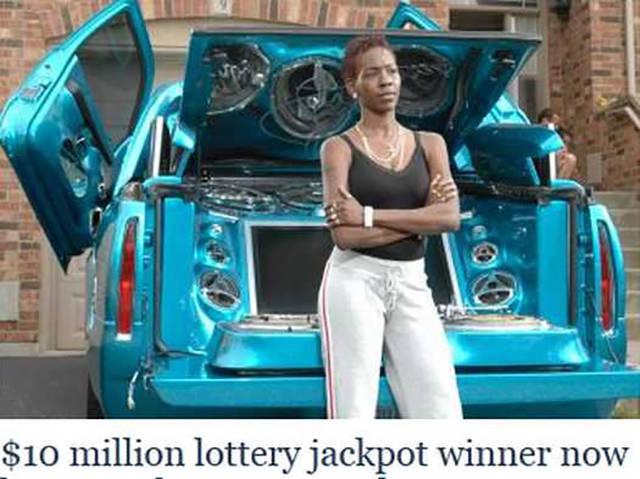 She subsequently spent her winnings on a "big house, fancy cars, designer clothes, lavish parties, exotic trips, handouts to family, loans to friends," and in less than a decade she's back "riding the bus, working part-time, and living in a rented house."

Luckily, Tirabassi put some of her windfall in trusts for her six children, who can claim the money when they turn 26.

Evelyn Adams gambled it all away in Atlantic City. 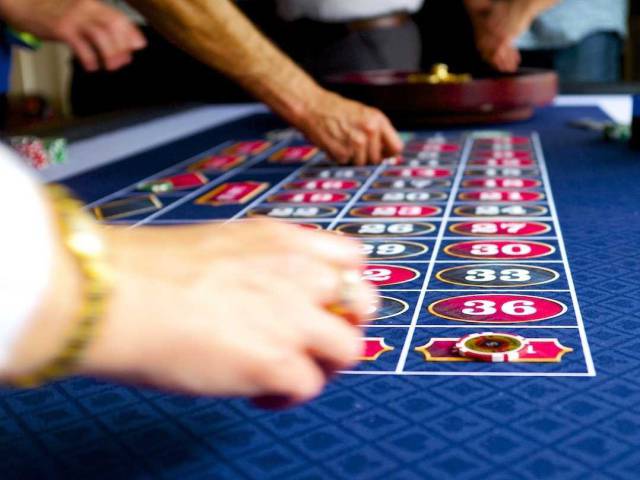 The New Jersey native won a cool $5.4 million, but AskMen.com reports that she gambled it away at Atlantic City.

She now reportedly resides in a trailer park. 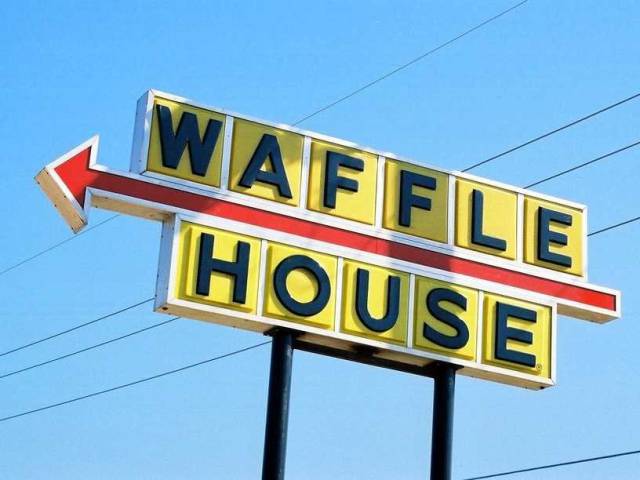 Tonda Lynn Dickerson, a former Waffle House waitress, got served a big plate of karma when she refused to split her winnings with ex-colleagues and was forced to pay the tax man $1,119,347.90.

How did it happen? Dickerson placed her winnings in a corporation and granted her family 51% of the stock — qualifying her for the tax. 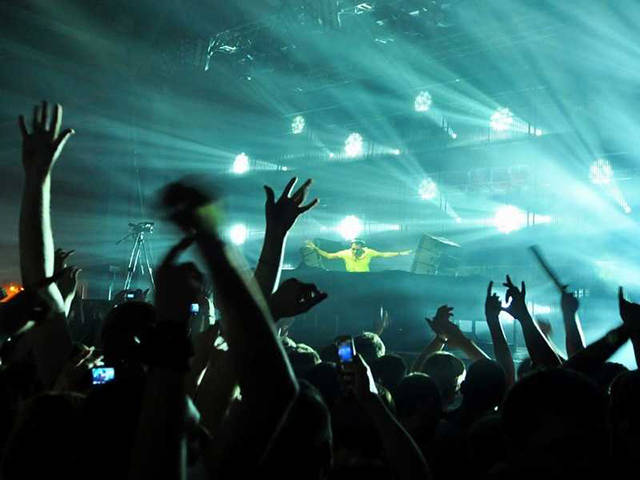 But he blew it all on drinking and partying in only seven years.

Filled with remorse, Muswagon hanged himself in his parents' garage in 2005.

Suzanne Mullins couldn't dig herself out of debt. 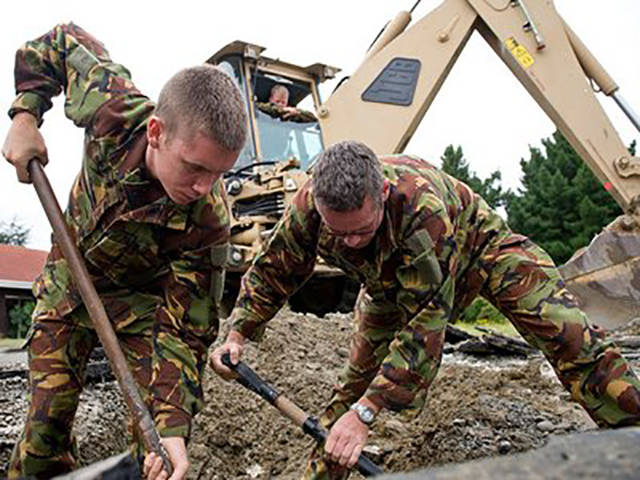 When Mullins won the US lotto in 1993, she opted for yearly payouts instead of a lump sum, reports MSN.

She quickly found herself in debt, using future payouts as collateral for a $200,000 loan.

Mullins later switched to a lump sum payout, but never paid back the debt. The loan company filed suit and won a $154,000 settlement that was all but worthless — Mullins had no assets.

Americo Lopes quit his job, lied about it, and then got sued. 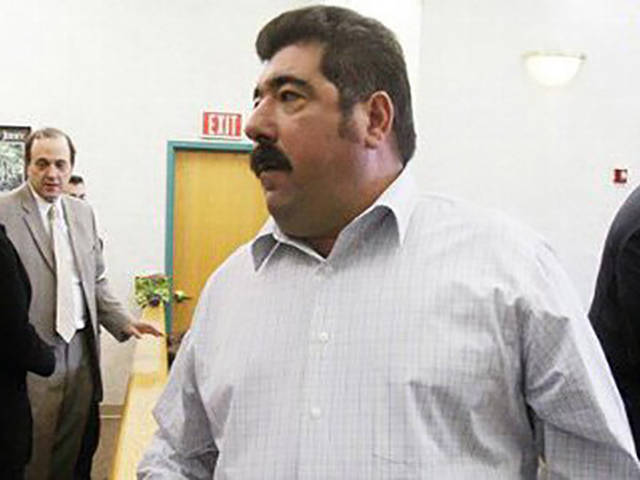 Construction worker Americo Lopes won the New Jersey lottery, quit his job, and then lied about it, claiming that he needed foot surgery, reports The New York Times.

After coming clean to an ex-colleague, he and a few others ganged up on Lopes for not splitting the winnings as promised.

The court ordered Lopes to split the prize.

Ibi Roncaioli was murdered by her husband after she squandered her winnings. 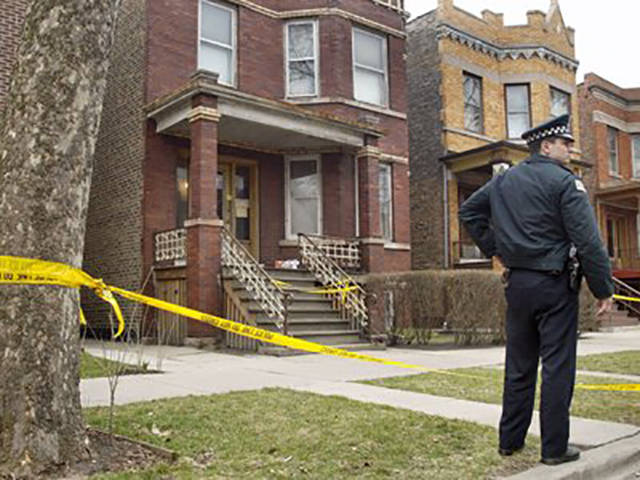 Ontario resident Ibi Roncaioli walked away with $5 million in a 1991 Lotto 649 drawing, but she didn't tell her husband how she decided to spend it.

When Joseph Roncaioli, a gynecologist, found out Ibi gave $2 million of her fortune to a secret child she'd had with another man, he poisoned her with painkillers, the Toronto Star reports.

He was found guilty of manslaughter and reportedly asked Ibi's family to help foot the bill for her funeral.

Michael Carroll lived in the fast lane and blew it all. 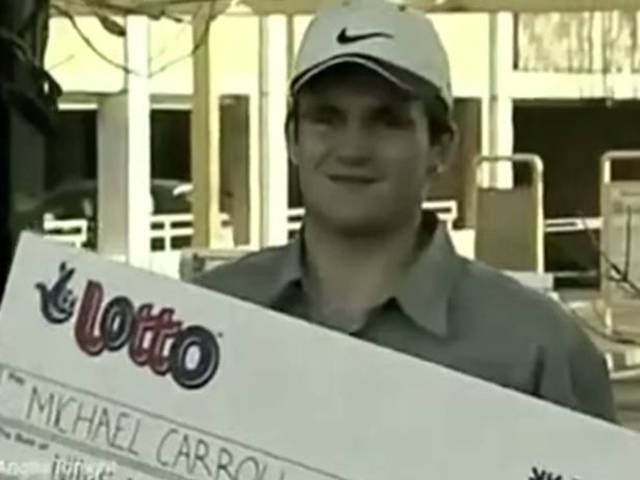 But a penchant for life in the fast lane — cocaine, parties, hookers, and cars — put him back at square one in five years.

Last we heard, the ex-garbageman was hoping to get his old job back. 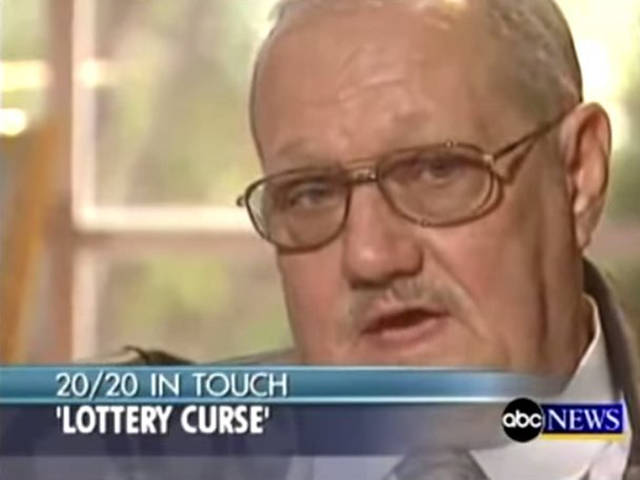 That was just about his last stroke of good fortune.

Thieves ran off with $545,000 Whittaker stashed in his car. Later on, he was sued by Caesar's Atlantic City for allegedly bouncing $1.5 million in checks.

Within four years, his fortune was gone.

Billy Bob Harrell Jr. had his prayers answered, but his luck ran out after he couldn't say no. 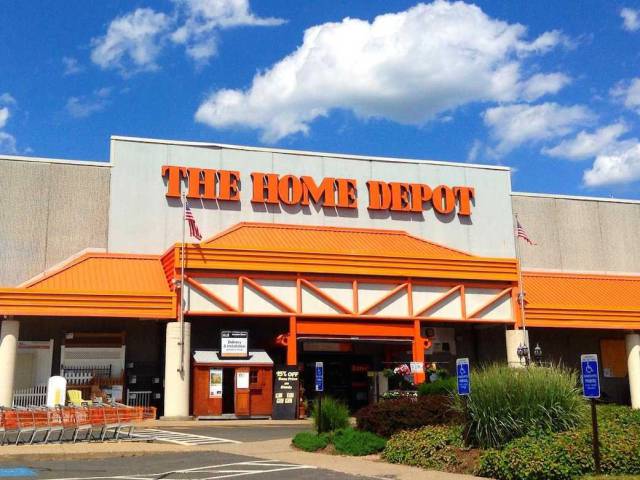 A Pentecostal preacher working as a stock boy at Home Depot got his prayers answered when he hit the $31 million jackpot in 1997.

At first, life was good, with Billy Bob buying a ranch, six other homes, and some new cars.

But like many others who win the lottery, he just couldn't say no when people asked for a handout.

Later in life he divorced and eventually committed suicide.

Willie Hurt's crack addiction did him in. 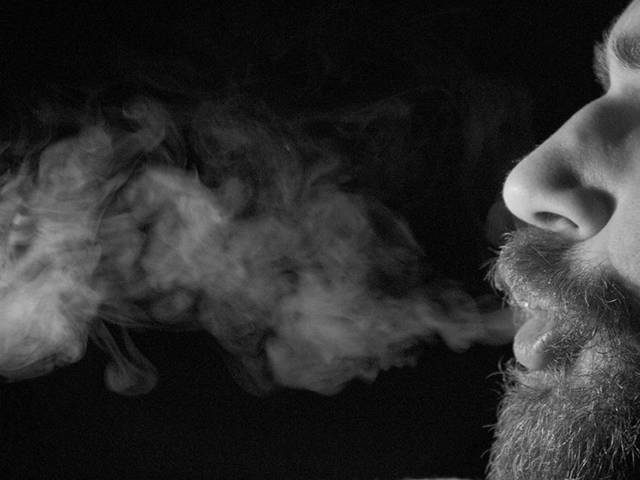 Fast-forward two years later and Hurt got divorced, lost custody of his children, was charged with attempted murder, and picked up a crack-cocaine addiction.

The habit was so bad that it sucked away his entire fortune.

Denise Rossi didn't disclose the jackpot in her divorce filing. 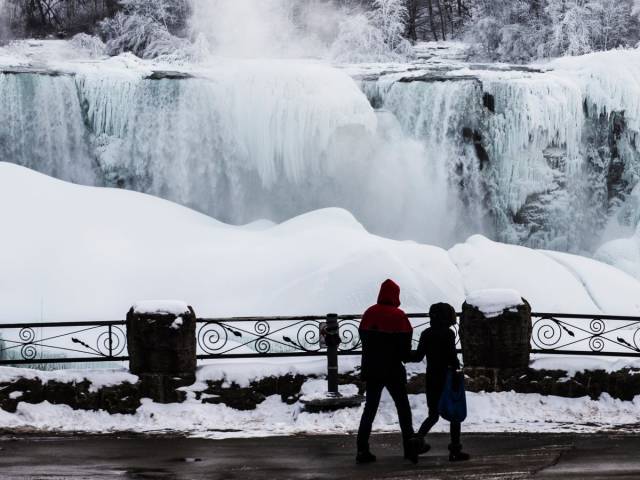 When Denise Rossi won $1.3 million in the California lotto, she left her husband without a word, reports People magazine.

Thomas knew something was up, but agreed to divorce her anyway.

Two years later, he intercepted a letter at his new Los Angeles home revealing the truth.

He sued Denise for not disclosing her winnings in the divorce, and the judge awarded Thomas every cent. 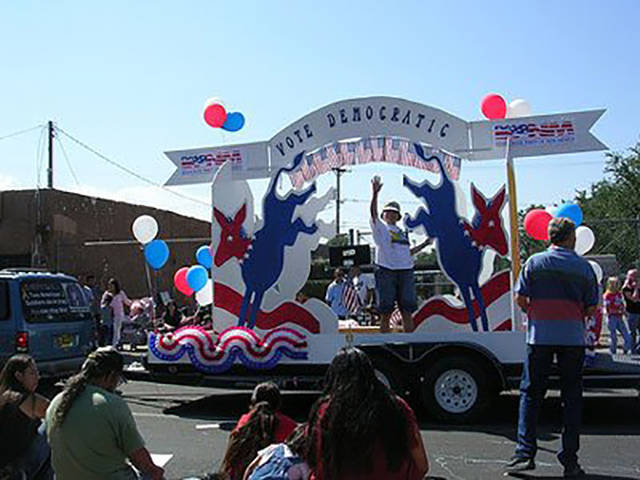 After winning an $18 million lottery jackpot in 1993, Janite Lee's earnings were gone within a decade.

The St. Louis Post-Dispatch reports that Lee, a wigmaker from South Korea, blew her winnings on, of all things, charity.

A reading room was named after her at Washington University's law school, and she was a major donor for the Democratic Party.

But her giving hand, coupled with a little gambling and a lot of credit-card debt, allegedly did her in. She filed for bankruptcy in 2001. 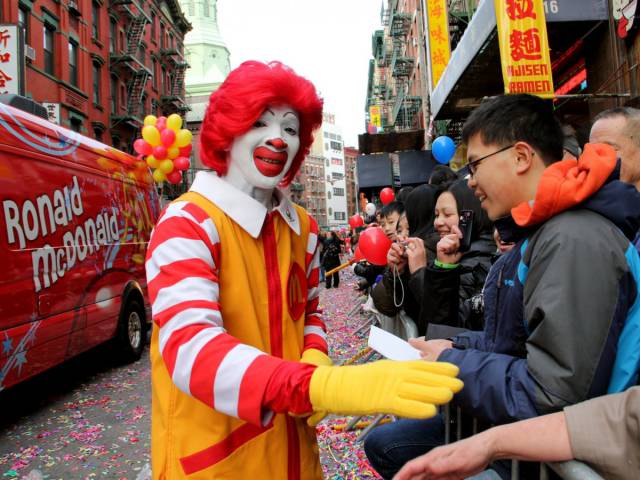 A year and a half later, Pittard was forced to take a job at McDonald's flipping burgers.

He says he's happy, and his leftover winnings collect interest.

Rhoda and Alex Toth both landed in court for tax evasion. 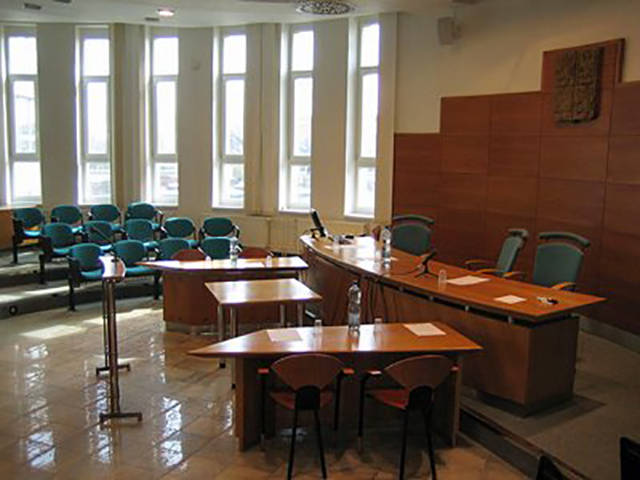 Alex and Rhoda Toth hit the $13 million jackpot in Florida in 1990. Within 15 years, they were destitute.

According to the Tampa Bay Times, the couple declared bankruptcy and were eventually accused of tax evasion by the IRS.

Alex died before his case went to trial, and Rhoda eventually served two years in prison.

Vivian Nicholson was a clothes horse who couldn't stop shopping. 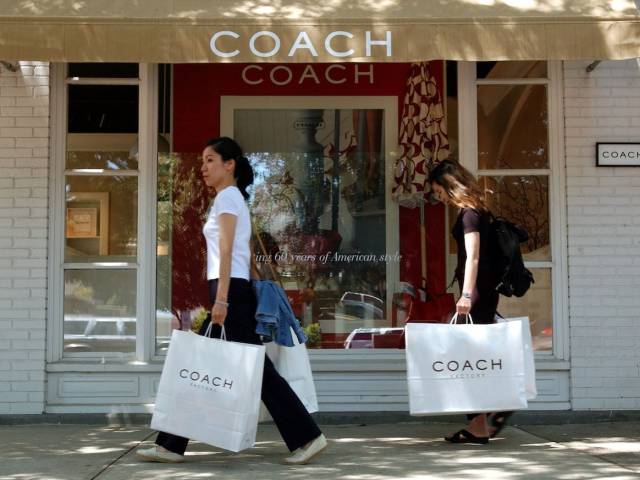 Daily Mail UK reports that Vivian Nicholson got a taste of the good life when she won a fortune — £152,300 — in Britain's football pools in 1961.

Too bad she blew it all filling her closet with haute couture.

Teen mom Callie Rogers was too young to spend her money wisely. 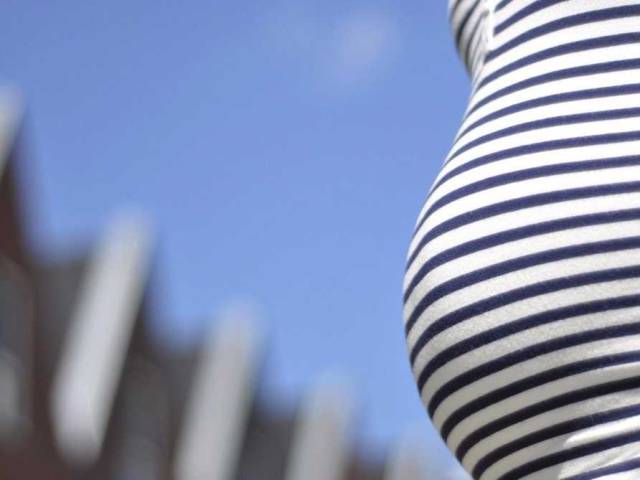 Callie Rogers was just 16 when she won £1.9 million — about $3 million — in the UK's lottery in 2003, and she was too young to know how to manage her money or where it would lead her, according to Gawker.

Rogers had two children and then blew the rest on partying, vacations, and gifts for her friends.

Now Rogers works as a cleaning woman and is reportedly facing bankruptcy.

Barry Shell used one of his last dollars to buy a lotto ticket. 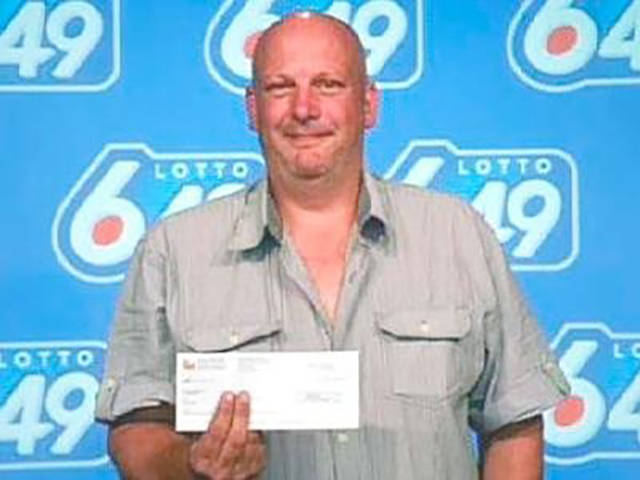 Barry Shell won $4 million in the lottery in 2009 in Ontario, Canada, after he used the last of his cash to buy a ticket.

But there was a warrant out for his arrest on charges of theft and possessing stolen property, and police figured out where he was after seeing a photo of him with his prize. He gave his winnings to a relative.