John Carpenter, Who Wants to Be a Millionaire? 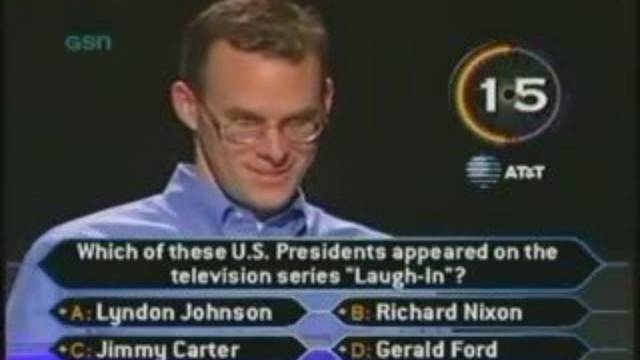 John Carpenter, a trivia-loving, IRS agent from Massachusetts, is arguably the most famous contestant on Who Wants to Be a Millionaire?. He is well-known for being the first to win the top prize on the U.S. edition but he is probably most remembered for his shocking final (and only!) lifeline call that he made to his father.

John made it to the final million dollar question (above, answer B) without having used any lifelines. The audience and host, Regis Philbin had accepted his genius I.Q. and expected him to breeze through the final question like he had the previous questions. However, he surprised the audience and Regis Philbin when he announced he would be using his phone-a-friend option! Who did John call? He called his father! When his father answered, instead of asking him for help in answering the question, John informed him that he already knew the answer to the million dollar question and would be winning the top million dollar prize. That moment went down as one of the most memorable moments in television game show history.

John appeared on a later special edition of the game show and won an additional $250,000! This made his total game show earnings from the show, a staggering $1,250,000. John appeared on numerous talk shows and even Saturday Night Live. Did he quit his job? Nope. John kept his job as an IRS agent and has co-authored books on trivia questions.