Design House That No One Wants To Buy (21 pics)


There is a peculiar house in Hillsborough, California, which the locals call the "Flintstones House" due to its kooky looks. The house was originally listed at $4.2 million. It has been on the market for a year now but still has not attracted any buyers, even after two price cuts. Let’s peep inside the house and see what might be driving the buyers away.

Even from far away, it's easy to The Flintstones House isn't a normal property. 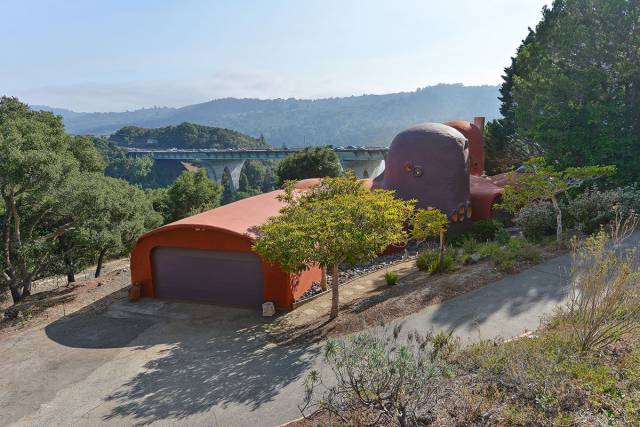 It's made from concrete that's been painted orange and purple, though it was first finished in an off-white color when it was built in 1976. 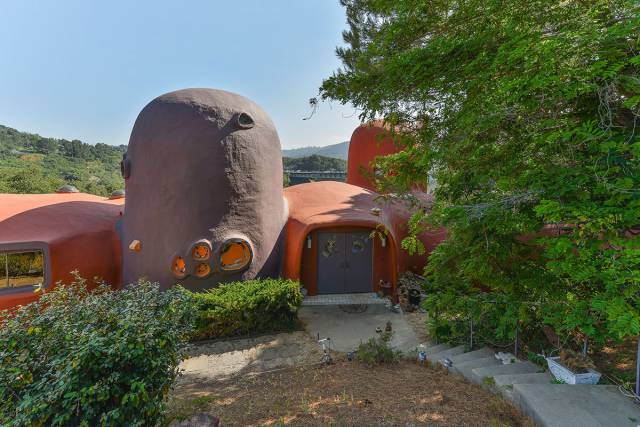 The odd shape of the house was created by applying shotcrete to both a steel rebar structure and a series of mesh frames held up by inflated balloons typically used for aeronautical research. 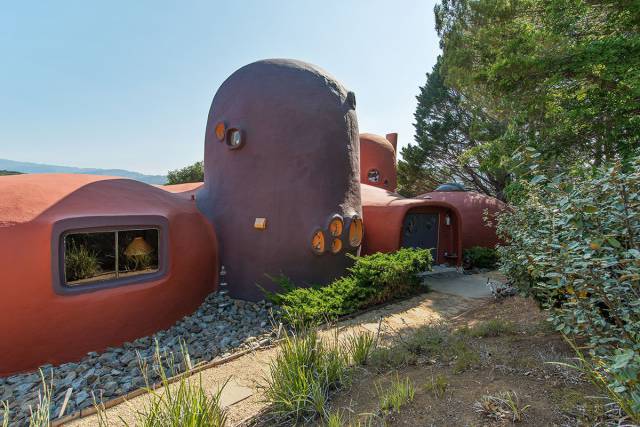 This gives it that prehistoric, lumpy look, hence the nickname. 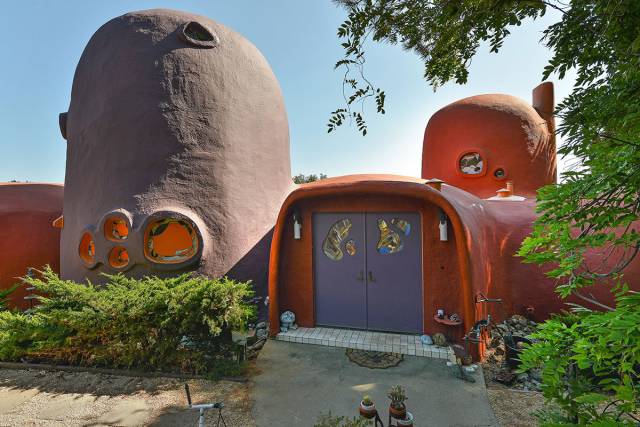 Tiling and unique artworks cover the entire single-family home and match the exterior. 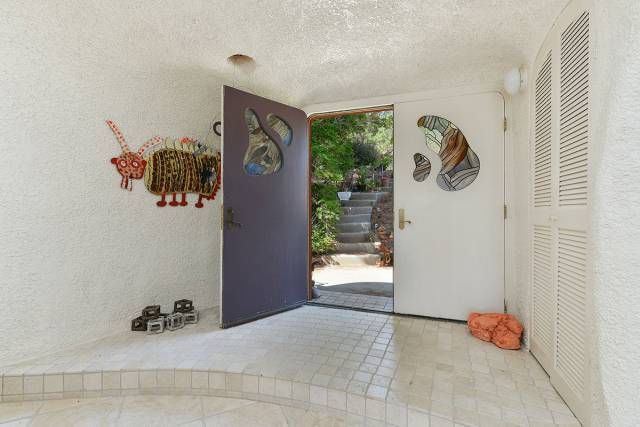 The color scheme inside even matches the exterior. 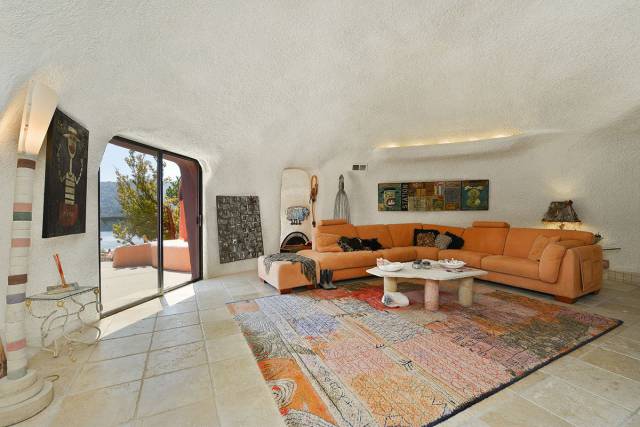 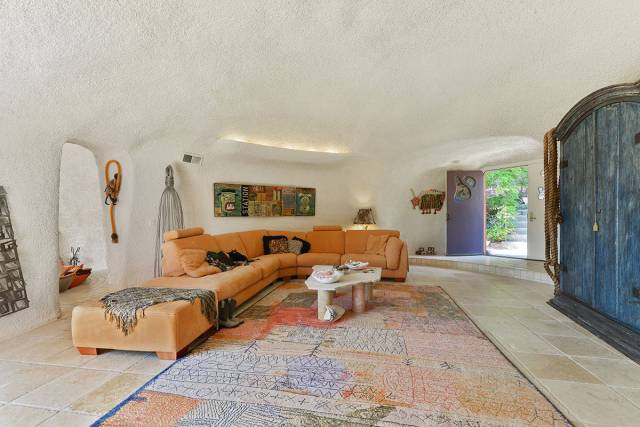 The home fell into disrepair in the '80s, and it was repaired and renovated after mountain-water runoff eventually did major damage to the foundation. 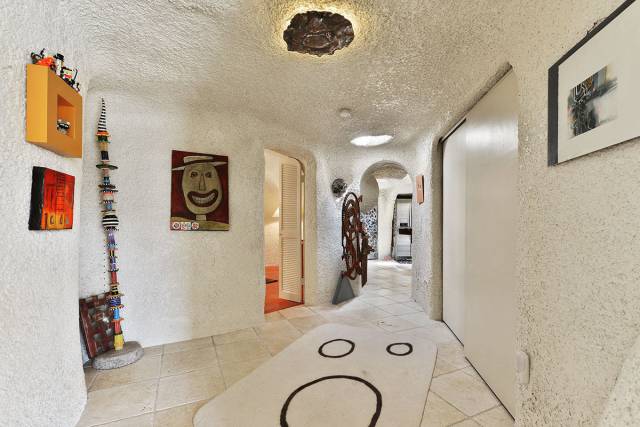 At that point, the house also changed hands. 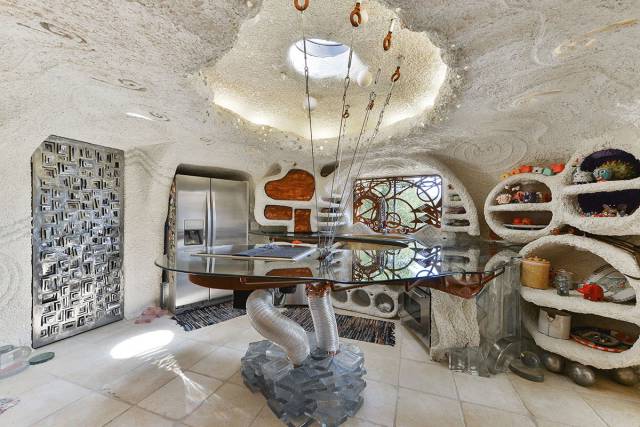 The kitchen features a center island attached to the roof of the house, which also features a skylight. 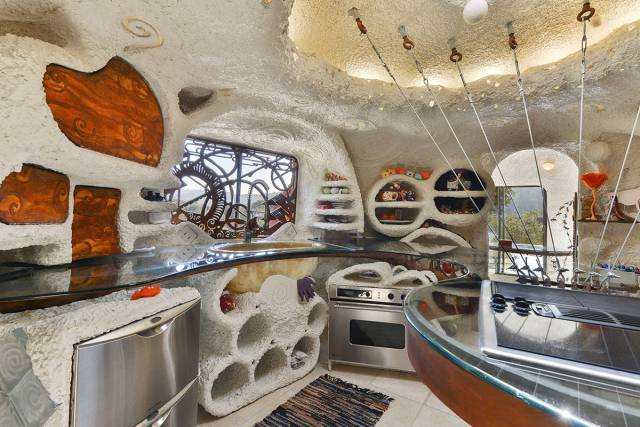 Despite appearances, the home does contain typical appliances. 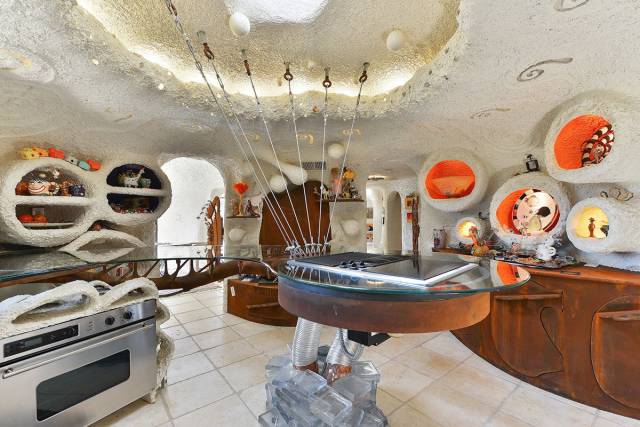 The home has attracted its share of criticism for its experimental design. 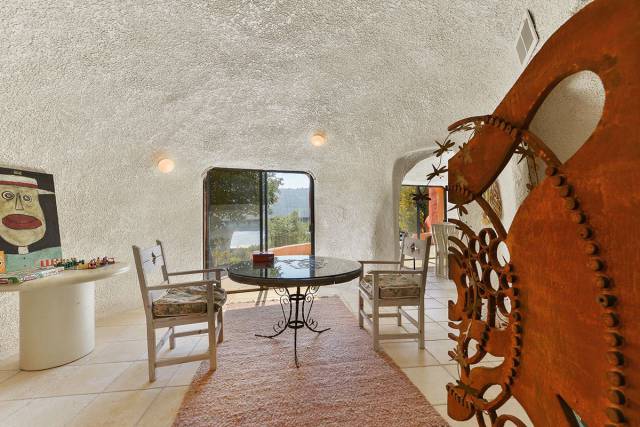 Many have called the home an eyesore, and others are just curious about what it looks like inside. 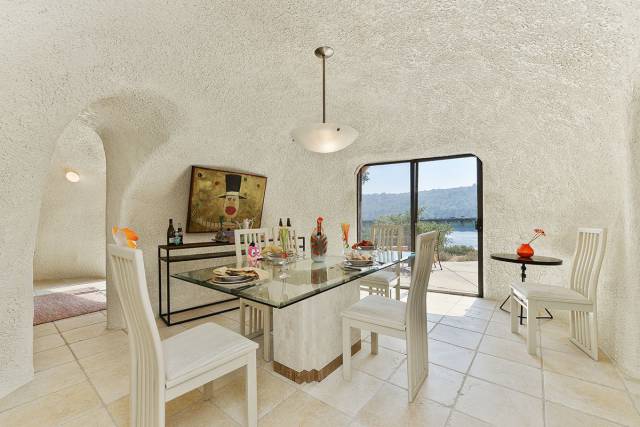 This criticism has only increased since the current owners bought the property in 1996 for $800,000. 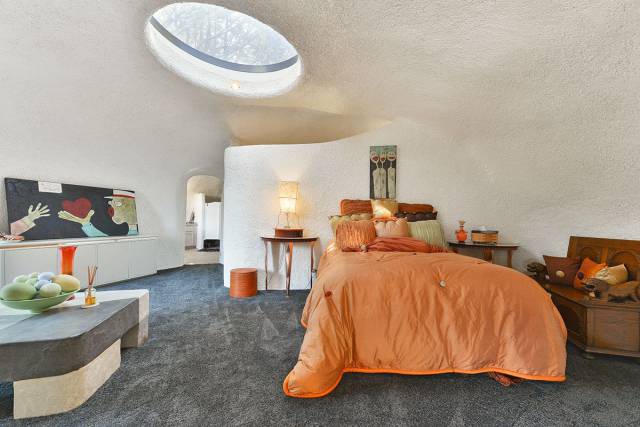 They turned it from white to the current orange and purple color scheme. 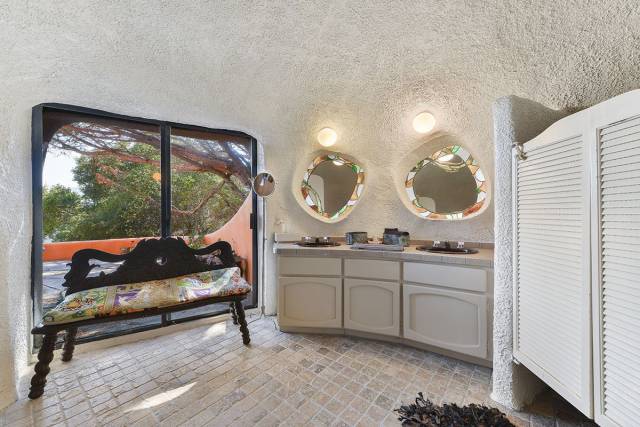 Love it or hate it, the home has become a San Francisco-area landmark. 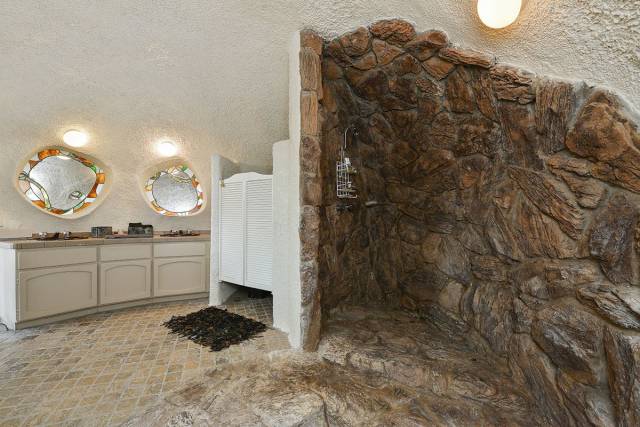 Many celebrities have been rumored to have lived in, purchased, or bid on the house, including ... 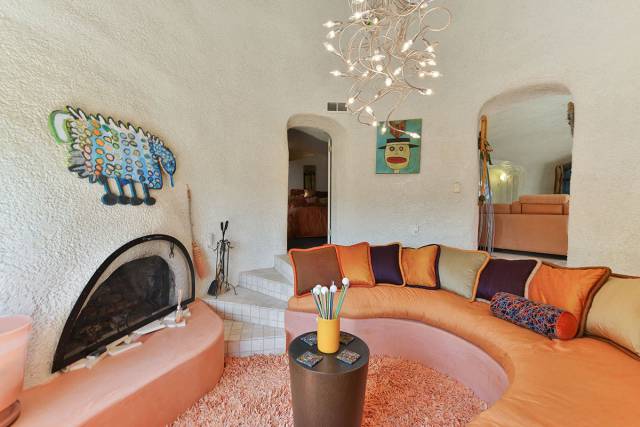 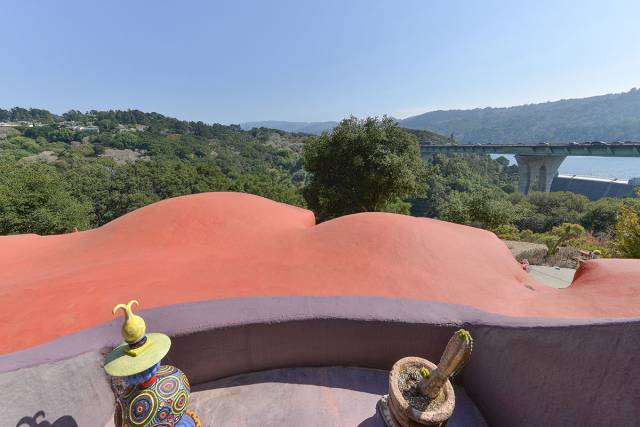 The home originally listed for $4.2 million in September 2014, but it remains on the market. 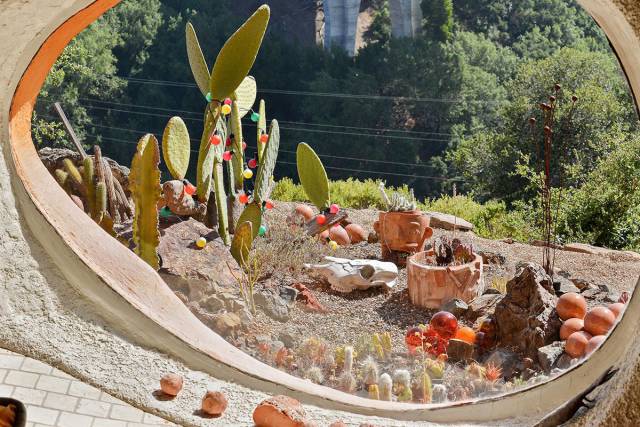 It was recently chopped to $3.2 million — the second price chop in a year. 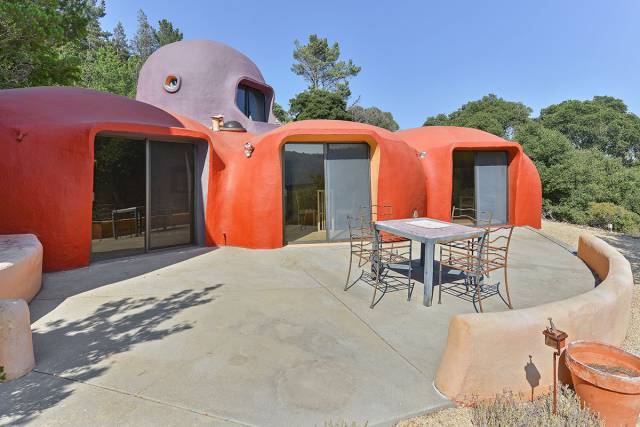 For whoever does purchase the home, they'll be getting three bedrooms and 2,700 square feet of quirky San Francisco history. 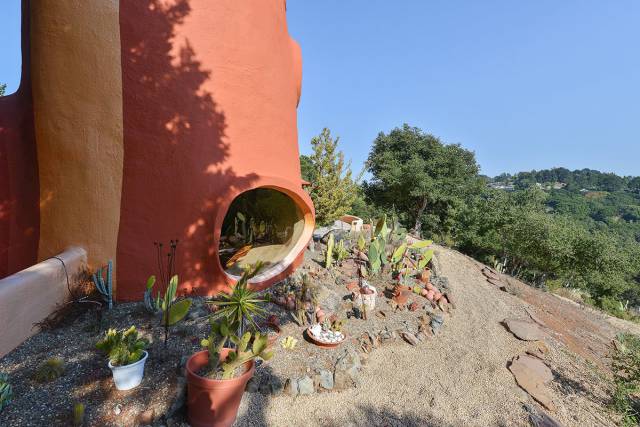