An Inside Look At Life In Pyongyang (24 pics)

A hostess adjusts the volume of a television broadcast showing a speech by North Korean leader Kim Jong-Un at a restaurant at the Yanggakdo hotel in Pyongyang on May 6, 2016 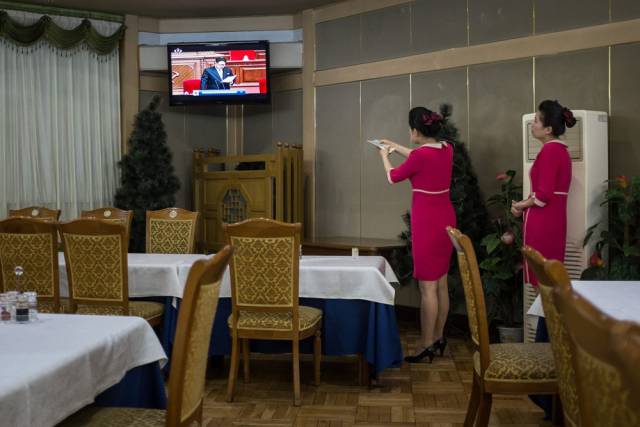 Men and women work in rice fields in Kangwon province, eastern North Korea on Thursday, June 23, 2016. The capital of Kangwon province is Wonsan, which is located along the eastern side of the Korean Peninsula and was one of the cities chosen to be developed into a summer destination for locals as well as tourists. 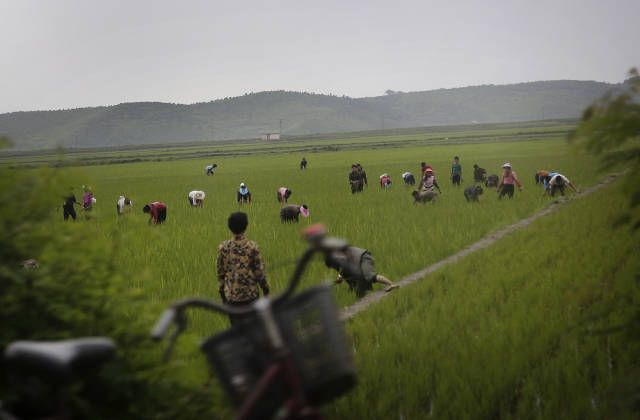 Female soliders march in a mass military parade at Kim Il-Sung square to mark the 70th anniversary of its ruling Worker's Party of Korea on October 10, 2015 in Pyongyang, North Korea. 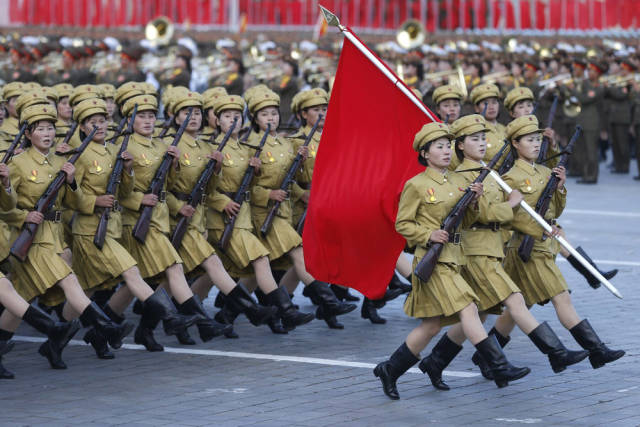 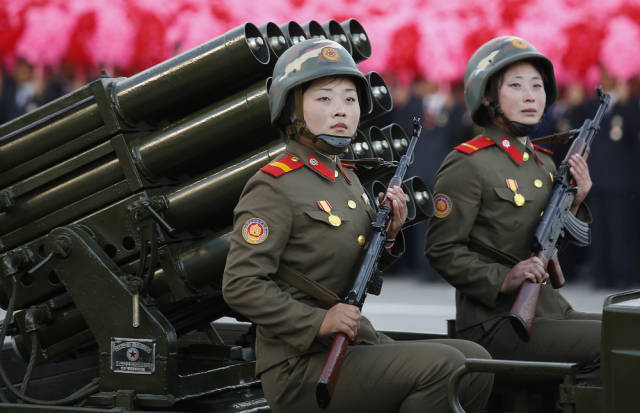 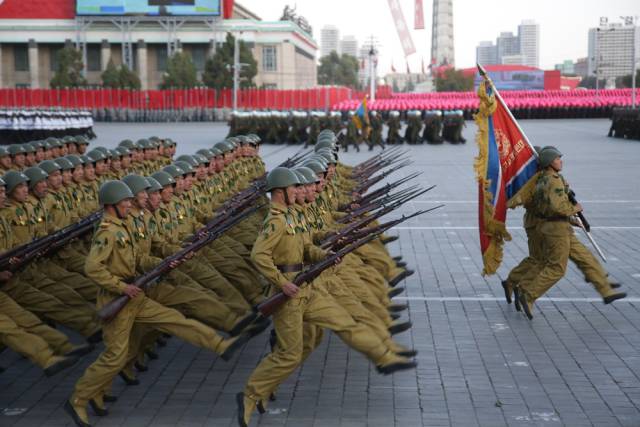 Floral baskets are placed before the statues of founder Kim Il Sung and late leader Kim Jong Il on Mansu Hill Thursday on the 22nd anniversary of demise of Kim Il Sung in this photo released by North Korea's Korean Central News Agency (KCNA) on July 8, 2016. 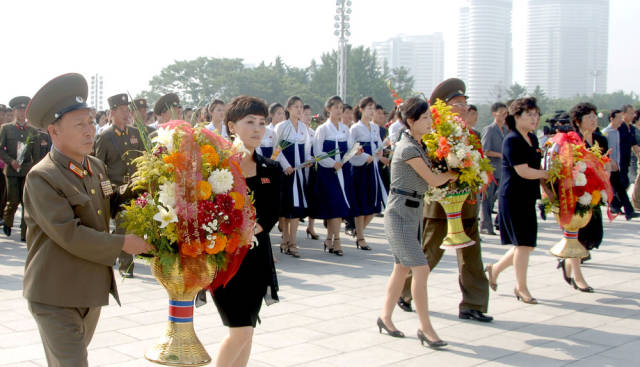 Soldiers shout slogans as they march past a stand with North Korean leader Kim Jong Un and other officials during the parade celebrating the 70th anniversary of the founding of the ruling Workers' Party of Korea, in Pyongyang October 10, 2015. 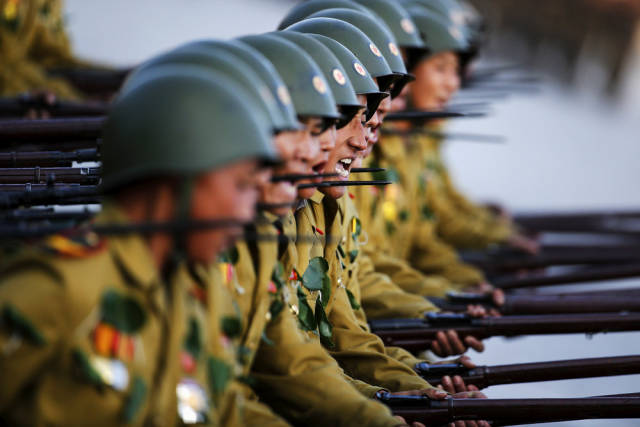 A view of an art performance staged by the amateur art groups of KPA units selected in the sixth round of the second-term art performance contest of KPA officers' wives, attended by North Korean leader Kim Jong Un, in this undated picture provided by KCNA in Pyongyang on July 16, 2016. 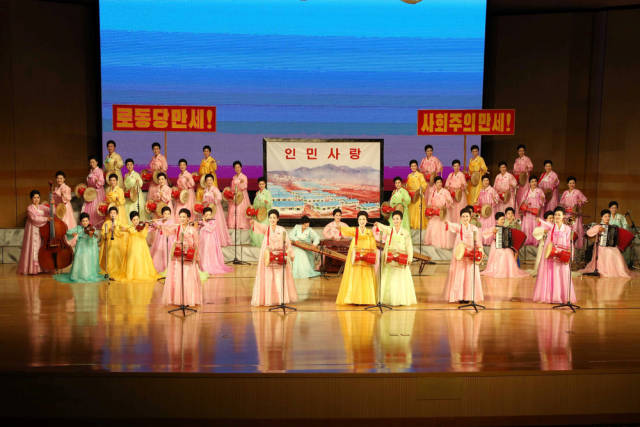 A child waits as members of a local propaganda troupe prepare to perform in a public square as part of a 200 day campaign aimed at kickstarting a new economic plan, in Pyongyang on July 10, 2016. 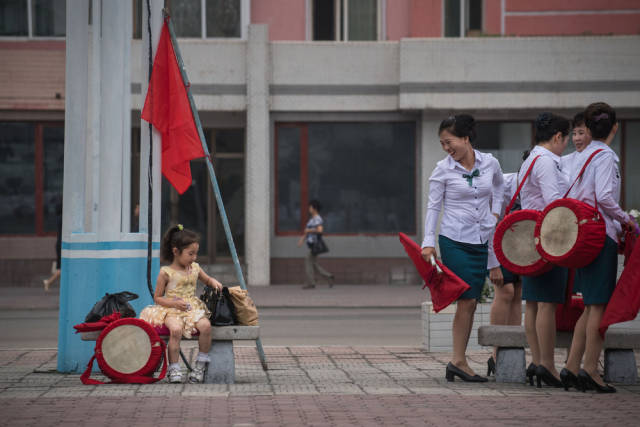 In this Wednesday, June 22, 2016, photo, factory workers operate sewing machines at a shoe factory in Wonsan, North Korea. For the past few weeks, North Koreans across the nation have been mobilized for a 200-day “speed campaign” in line with their leader Kim Jong Un's vows to raise the nation's standard of living and energize his new five-year plan to develop the economy. At the direction of Kim Jong Un, who visited the factory last November, workers are now focusing on making lighter, better quality shoes and providing a wider variety to make North Korea's shoe production “world class” before the five-year plan ends. 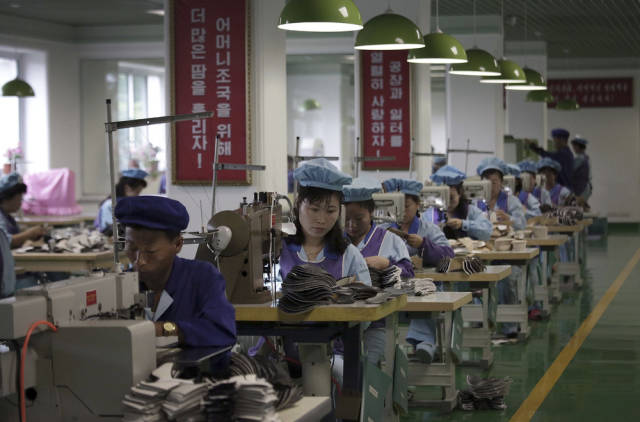 A student practices a computerised shooting game at a shooting range in Pyongyang on July 17, 2016. North Korea launched three ballistic missiles into the sea this week. The missiles, presumed to be Scud-types, were launched from North Hwanghae province and travelled for up to 600km, South Korean news agency Yonhap quoted the military as saying. The range is enough to reach all of South Korea. 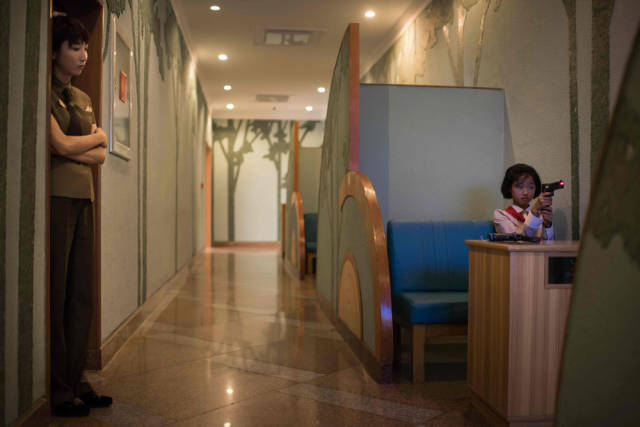 A North Korean man and woman walk under a mural with a message which reads “Long live the great victory of the army-first policy” in the city center of Wonsan on Wednesday, June 22, 2016, in Wonsan, North Korea. 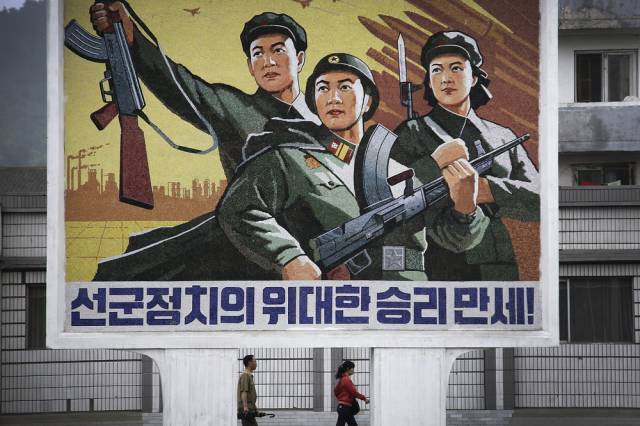 A worker catches a ball after performing a bounce test at the newly opened Pyongyang Sports Equipment Factory in Pyongyang, North Korea, Monday, August 22, 2016. Despite claiming only two gold medals in Rio, North Korea is as determined as ever to fulfill one of leader Kim Jong Un’s primary goals: to become an international sports superpower. 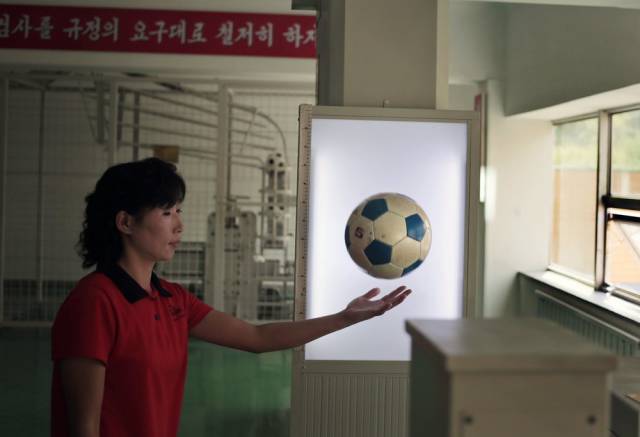 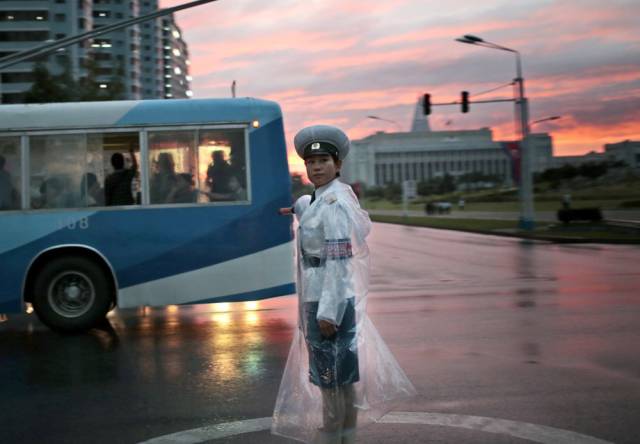 North Koreans prepare to pay their respects to the statues of former North Korean leaders Kim Il-Sung and Kim Jong-Il, at Mansu hill in Pyongyang on July 7, 2016. 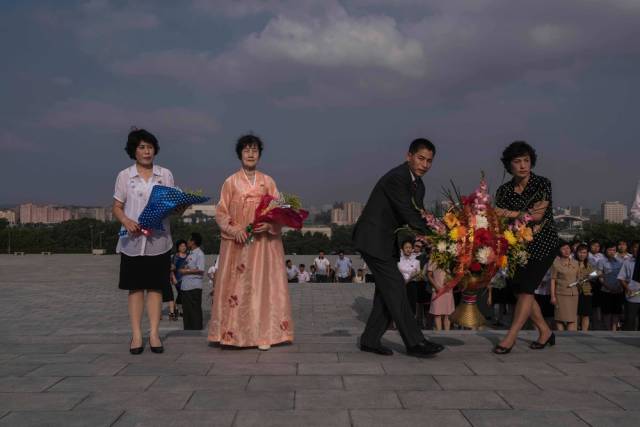 A Pyongyang resident undertakes volunteer work as he sweeps around the statues of former North Korean leaders Kim Il-Sung (L) and Kim Jong-Il (R), on Mansu hill in Pyongyang on July 13, 2016. 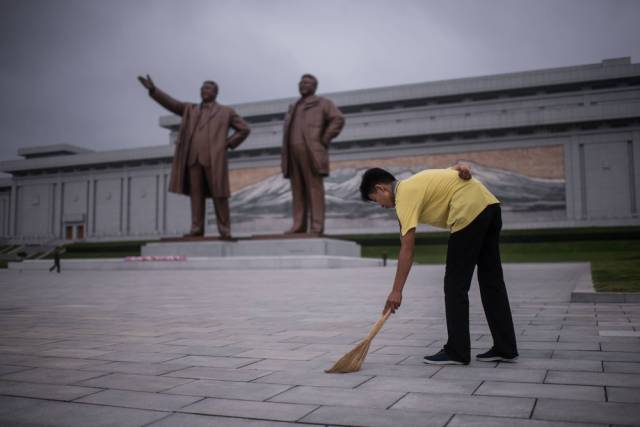 A North Korean woman balances a pail on her head while she walks past men smoking by the road at the end of a work day on Wednesday, June 22, 2016, in Wonsan, North Korea. 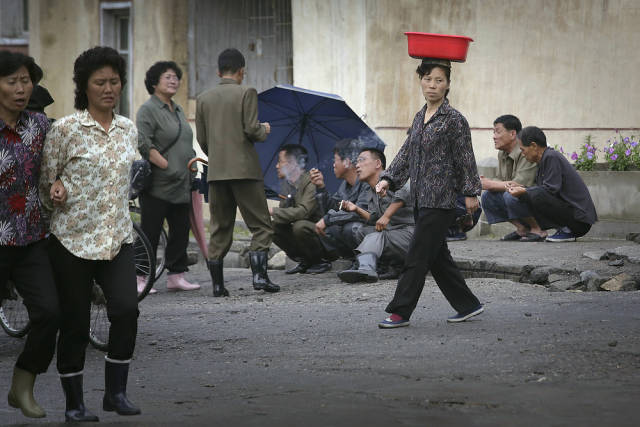 In this June 27, 2016, photo, North Korean men and women walk past buildings under construction on “Ryomyong Street”, in Pyongyang, North Korea. Hoping to show the world his country is doing just fine despite sanctions and outside pressure over its nuclear weapons program, North Korean leader Kim Jong Un has put his soldier-builders to work on yet another major project – a series of apartments and high-rises that are once again changing the Pyongyang skyline. “Ryomyong Street”, is to have the country's tallest apartment building, at 70 stories, along with a 50-story building and a handful of smaller ones in the 30-40 story range. 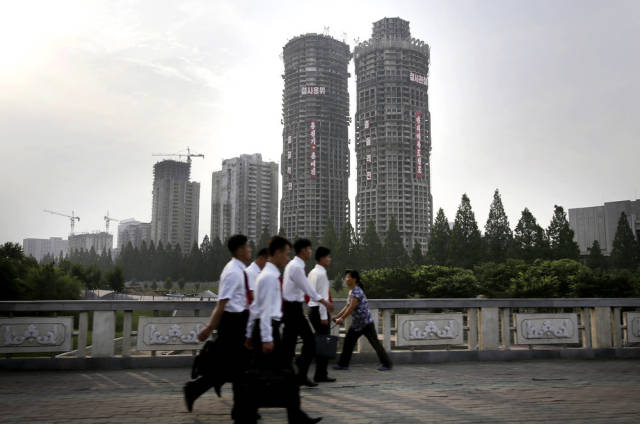 A waitress is silhouetted against an advertisement board as she carries jugs of beer during Taedonggang Beer Festival in Pyongyang, North Korea, Sunday, August 21, 2016. The festival, the first of its kind in the country, was held as a promotional event for the locally brewed beer. 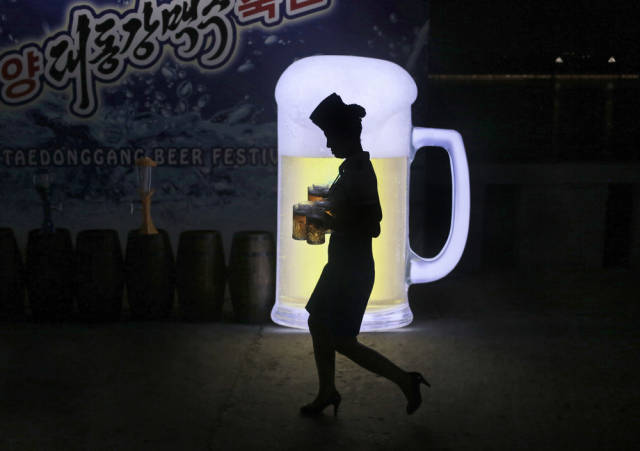 A giant screen broadcasts news coverage of a ballistic missile test conducted by the Hwasong artillery units of the KPA Strategic Force, in a public square in Pyongyang on July 20, 2016. North Korea said on July 20 its latest ballistic missile tests trialled detonation devices for possible nuclear strikes on US targets in South Korea and were personally monitored by leader Kim Jong-Un. 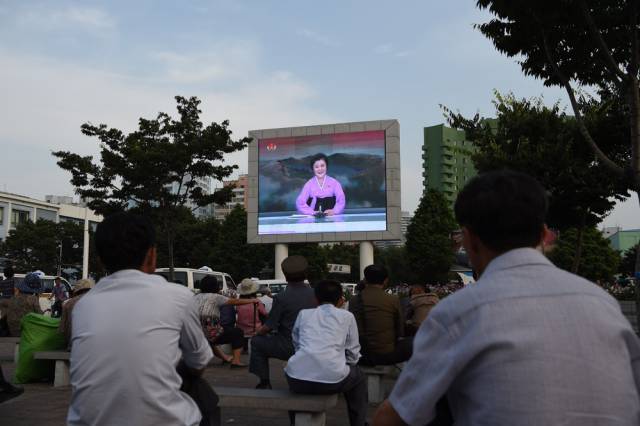 People ride on a trolley bus past a North Korean national flag flown to mark the celebration of the Songun Day or the “Military First” holiday in Pyongyang, North Korea, Thursday, August 25, 2016. North Korea marked its “Military First” holiday on Thursday with mass dancing, outdoor concerts and boasts of a successful – and potentially game-changing – submarine-launched ballistic missile test it hopes will serve as a warning to Washington and Seoul to stop holding joint military exercises Pyongyang sees as a dress rehearsal for invasion. 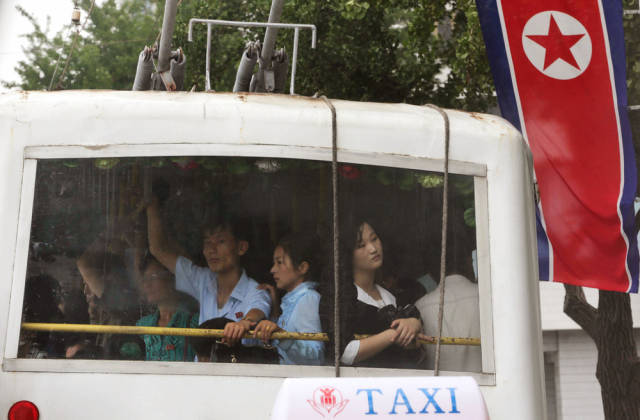 A bride and groom pose for photos with a horse at the Mirim riding school on the outskirts of Pyongyang, North Korea on July 12, 2016. 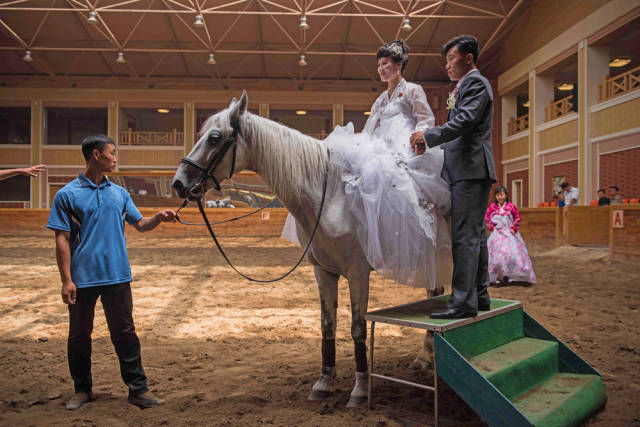 A beer server fills up glasses of draft beer at a beer festival held along the Taedong River on Friday, August 12, 2016 in Pyongyang, North Korea. 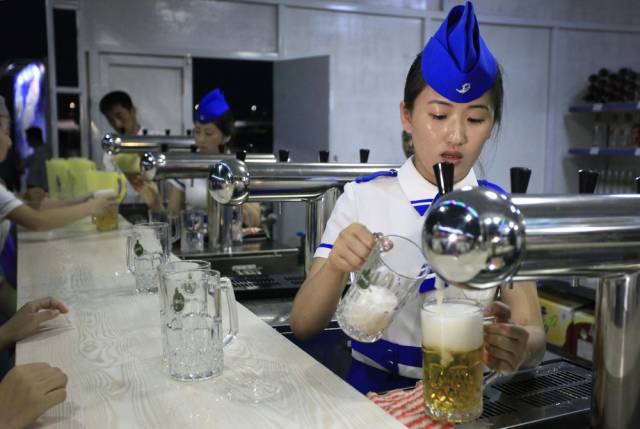 A group of North Korean workers and a child walk to pay their respects to late North Korean leader Kim Il-Sung on the anniversary of his death, outside the Kumsusan Palace of the Sun mausoleum in Pyongyang on July 8, 2016. 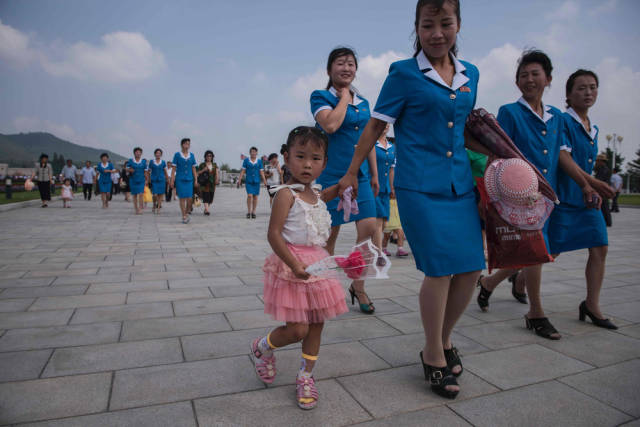