Longest cat: At 3ft 10.6in, Ludo is three times the size of the average moggie. A Maine Coon, one of the biggest domestic cat breeds, Ludo, three, lives with owner Kelsey Gill in Ryhill, West Yorkshire. She says: 'He's very friendly but some visitors are scared, as they're more used to seeing dogs that size' 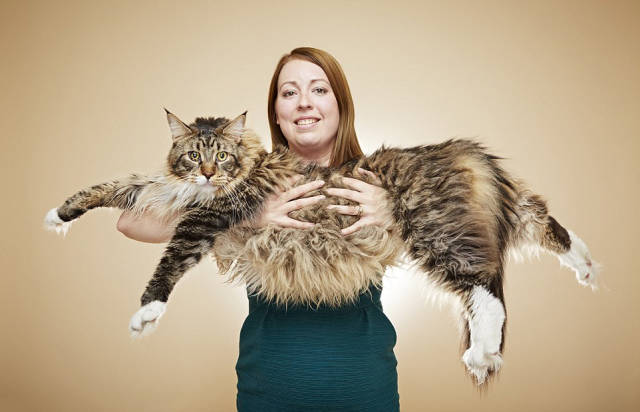 Highest jump by a llama: Caspa, from the Canine Centre in Porthmadog, North Wales, leapt his way into the record book by clearing a 3ft 10in hurdle in front of an adjudicator at a dog show. His owner Sue Williams said of the woolly jumper, who is part of the UK's only llama agility display team: 'Caspa is a real show off' 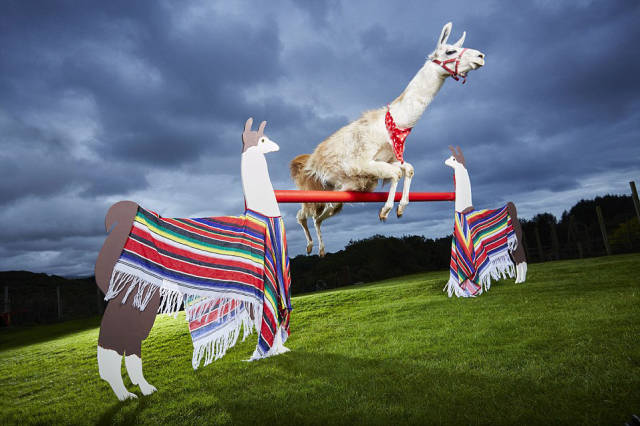 Largest foot rotation: Maxwell Day, 14, can rotate his feet by 157 degrees. Maxwell, from Enfield, North London, insists his unusual ability, which he has had since he was little, 'isn't painful'. He wears insoles in his shoes to keep his feet straight — or he wouldn't know whether he's coming or going 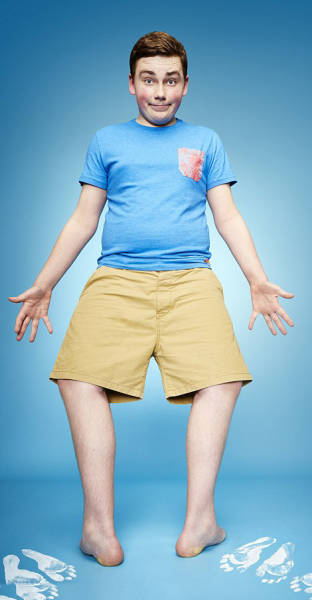 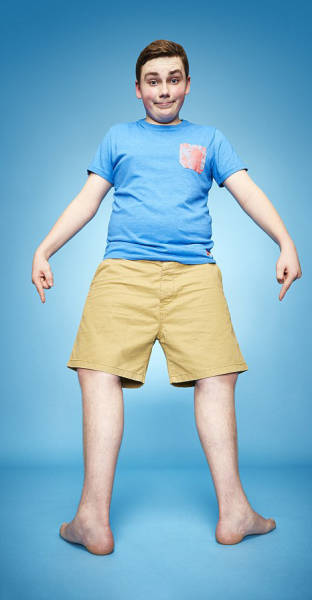 Longest tail on a dog: When Irish wolfhound Keon, five, wags his tail you'd better watch out — because it's 30.2in long. He lives with owner Ilse Loodts, 46, in Westerlo, Belgium, who applied for the record when her sons realised Keon's tail surpassed that of the previous record holder, another wolfhound, by 1.7in 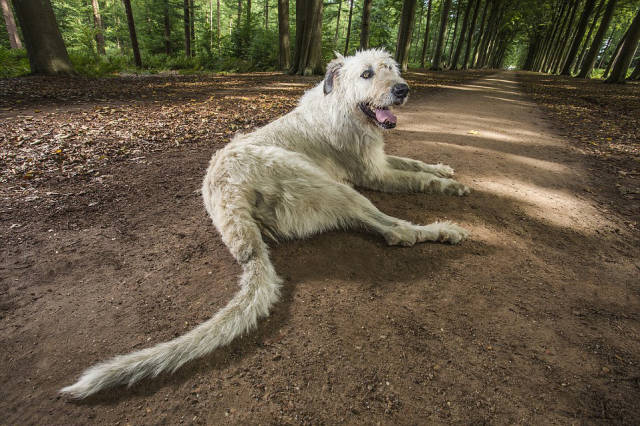 Longest distance pulled by a horse while on fire: Daredevil Josef Todtling, from Austria, was dragged 1,640ft while doing a 'full body burn'. He protected himself with several layers of clothing, a cooling gel and metal shin and elbow pads. The stuntman also holds the record for the longest duration full-body burn without oxygen — 5 minutes, 41 seconds 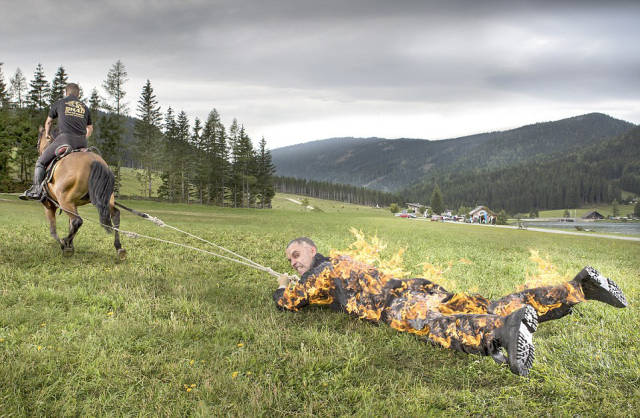 Biggest Mouth: That burger won't last long! Bernd Schmidt, 47, of Wendlingen, Germany, can open his mouth 3.46in wide. To win the title, he placed metal rods between his upper and lower incisors. The record was ratified by a dentist, who simply instructed: 'Open wide!' 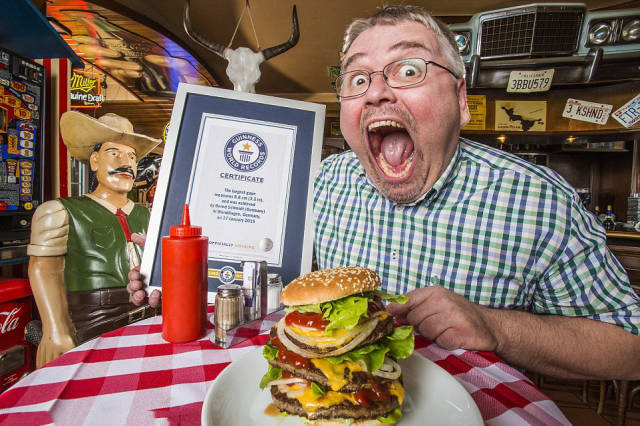 Most ice cream scoops balanced on a cone: Italian Dimitri Panciera, 54, piled up an incredible 121. Having owned an ice cream shop for many years in Germany, he recently moved back to Italy and set his record at Forno di Zoldo's annual Gelatiamo ice cream festival, near Venice. He also held the previous record of 109. It is not recorded how many scoops he managed to eat before the edifice melted in the Italian sunshine 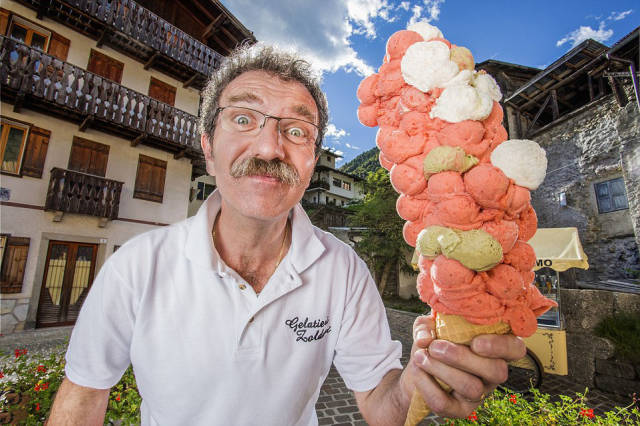 Most full volley rebounds in 30 seconds: John Farnworth, 30, from Lancashire, managed an incredible 28 rebounds. The professional football freestyler also holds the record for the longest duration controlling a ball on an elevated slackline. He played keepy-uppy on the wire for 29.82 seconds 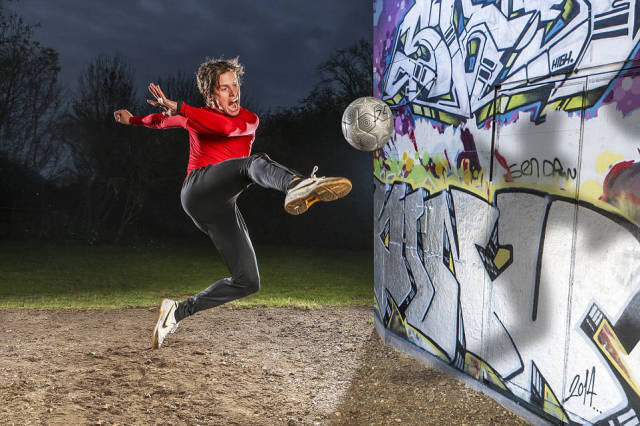 World's tallest female dog: Great Dane Lizzy, who is 37.96 inches tall lives in Alva, Florida, USA, with her owner Greg Sample. Spotted Lizzie was aged seven at the time of verification and is so tall she has to eat her food from a bowl that sits on a chair 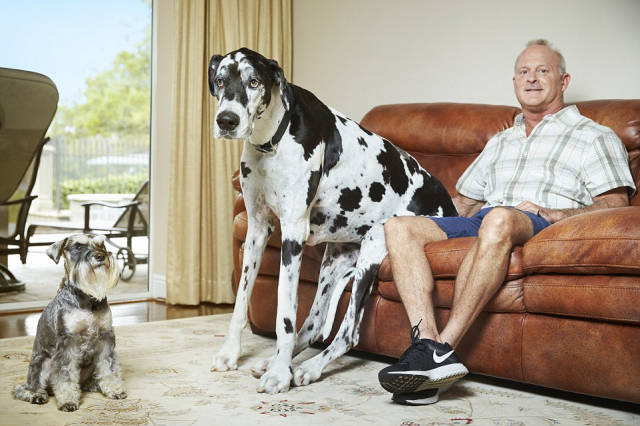 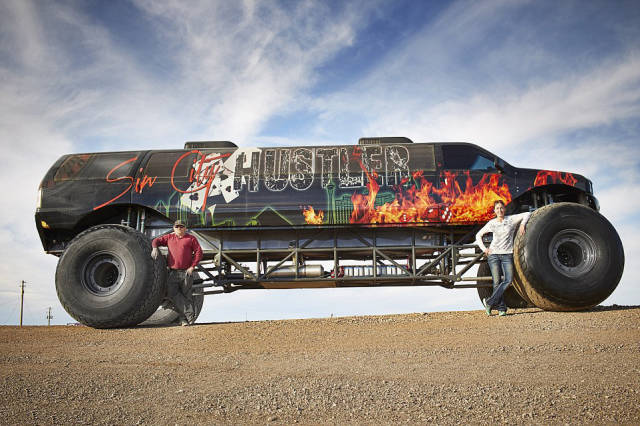 The biggest clogs: The largest pair of clogs in the world are based in the town of Casey, Illinois. They are 11.5inches long, 5ft 10 inches wide and 4ft 10 inches tall. The shoes were shaped and carved by chainsaw and weigh approximately 1500lbs 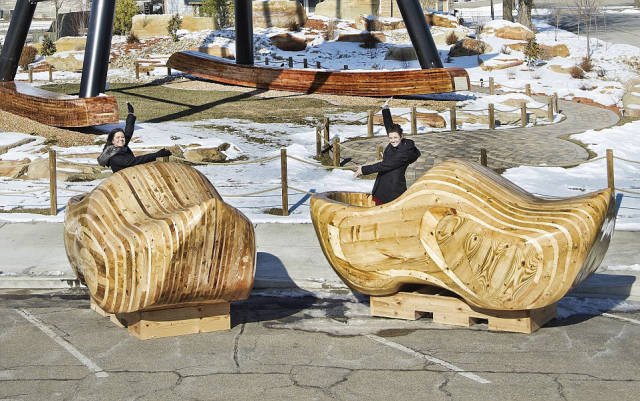 World's largest collection of hamburger-related items: Harry Sperl (aka Hamburger Harry) from Germany has 3,724 items. His collection, which includes cushions, t-shirts, cuddly toys and even a lightshade, was verified in Daytona Beach, U.S. in 2014 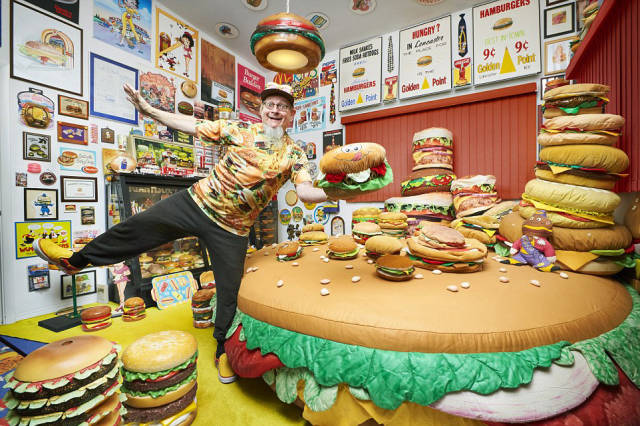 Youngest female with a beard: Anti-bullying activist, body image activist and catwalk model Harnaam Kaur of Slough, UK, has a beard measuring as long as six inches in places. She overcame years of bullying to take ownership of her appearance and achieve this record title at the age of 24 years 282 days. She describes her place in the records book as 'absolutely humbling' 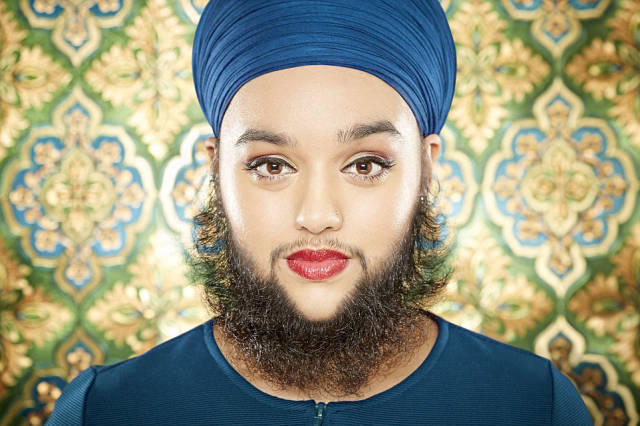 World's largest ukulele: Lawrence Stump, from Lansing, MI, USA, has the world's biggest ukulele instrument. It measures a whopping 13ft 1.08 inches (3.99 metres) long and can barely be held upright by Mr Stump. It was verified in December 2015 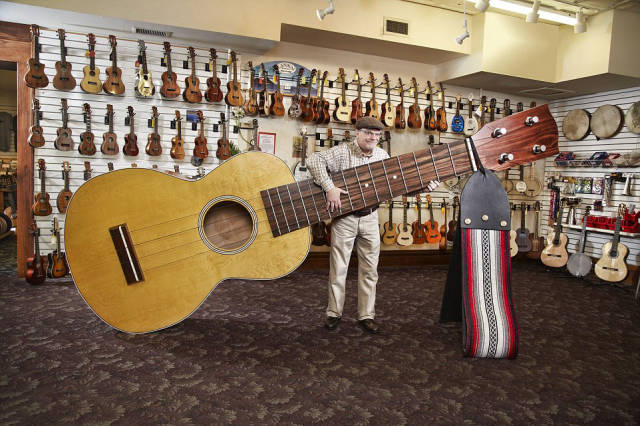 Most tricks performed by a dog in a minute: canine actor Smurf the Parsons Russell, seven, can do 32 including a handstand, putting a tea bag in a mug, walking backwards and various jumps , twists and twirls. Owner Sarah Humphreys, 50, from Hertfordshire, has been training him since he was a puppy 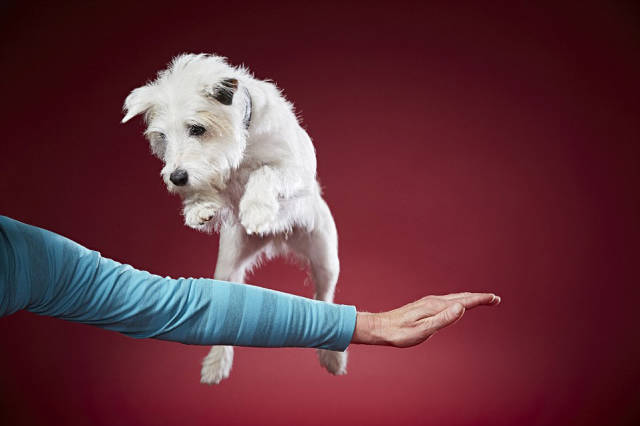 Most tattooed: Florida pensioners Charlotte Guttenberg and Chuck Helmke are the most tattooed senior citizens - male and female - in the world. Ms Guttenberg, 67 (pictured), has covered 91.5 per cent of her body with tattoos since first being inked just 10 years ago. Mr Helmke, 76, who sat beside her in the tattoo parlour to help to ease her nerves as she had her first tattoo, has 93.5% of his body covered in tattoos. All of this work was done in the last 16 years apart from one army tattoo 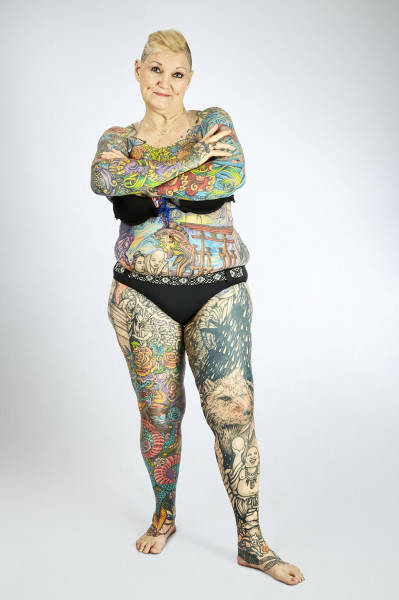 Largest mailbox: The world's largest postbox measures  5,743 ft long and was created by Jim Bolin in the U.S. There is a hidden stairway inside the structure and visitors can actually climb up into the mailbox before waving out of the front ledge 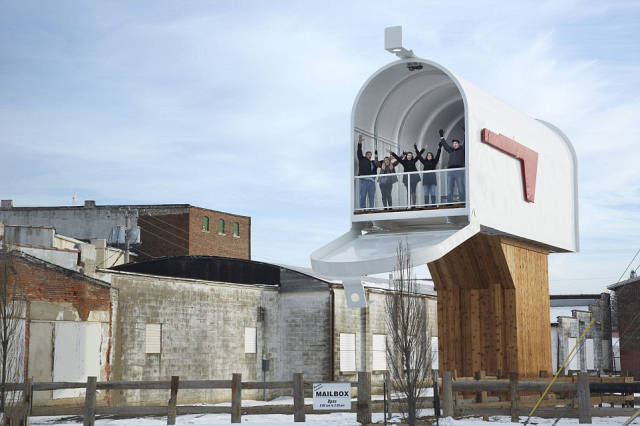 Biggest objects: This is the world's largest rocking chair (left) which is a whopping 56ft 1 inches tall and 32ft 10 inches wide. It is pictured on display outside Casey City Hall in Illinois, U.S. 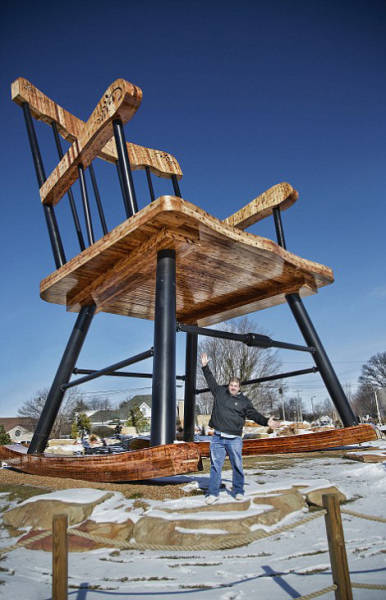 The largest golf tee in the world, which is 30ft 9 inches long and a 2ft 1 inch width, is also on display in Casey. It was made by Jim Bolin out of yellow pine boards glued together 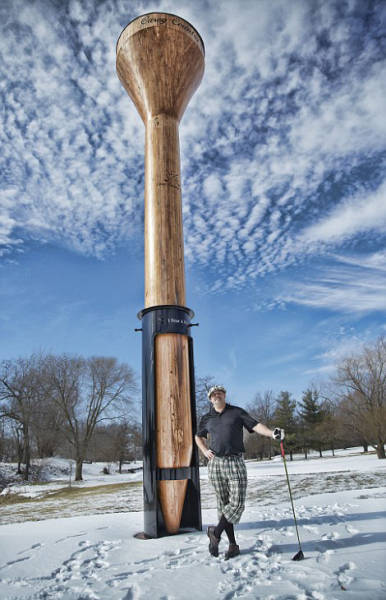 Clever kitty: Didga holds the record for the most tricks performed by a cat. The animal can complete 20 different tricks within just a minute and lives in Tweed Heads, New South Wales, Australia with owner Robert Dollwet (pictured together above) 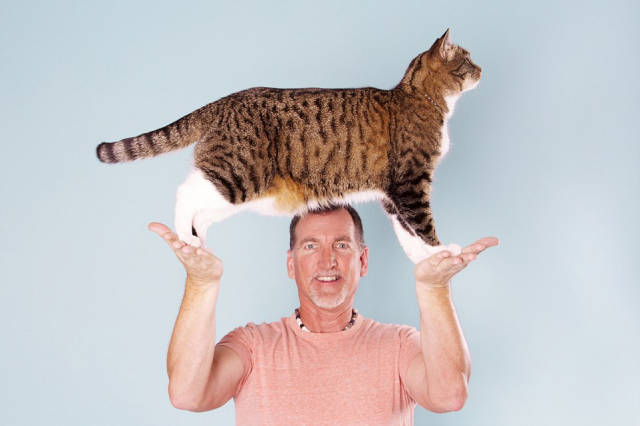 Largest collection of Doctor Who: Ian O Brien has the world's biggest collection of memorabilia from the hit TV series. Ian, from Manchester, UK, says he first caught the Whovian bug after watching Planet of the Daleks - an episode from 1974 and recalls being captivated watching the Daleks trying to bash down a barricade. He currently has more than 1,573 items 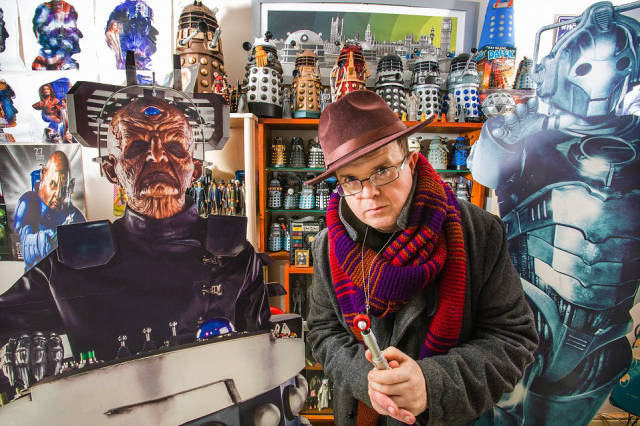 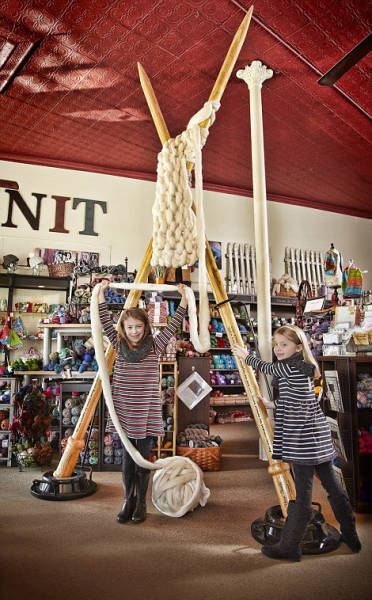 The world's largest wind chime was made by Jim Bolin and is situated in Casey, Illinois. The windchime measures 42 ft long and consists of five suspended metal tubes 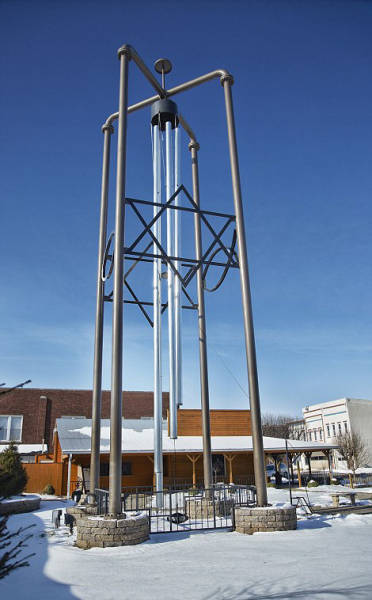