Sometimes our world is a cruel and a sad place, but it takes only one small act of kindness to restore our faith in humanity, inspire us and show us that there is always a chance to make things better.

When the Fukushima Nuclear Power Plant was damaged by the tsunami in Japan in 2011, a group of more than 200 Japanese pensioners volunteered to tackle the nuclear crisis at the site. They said they wanted to perform the job and face the danger of radiation to spare the lives of the young. 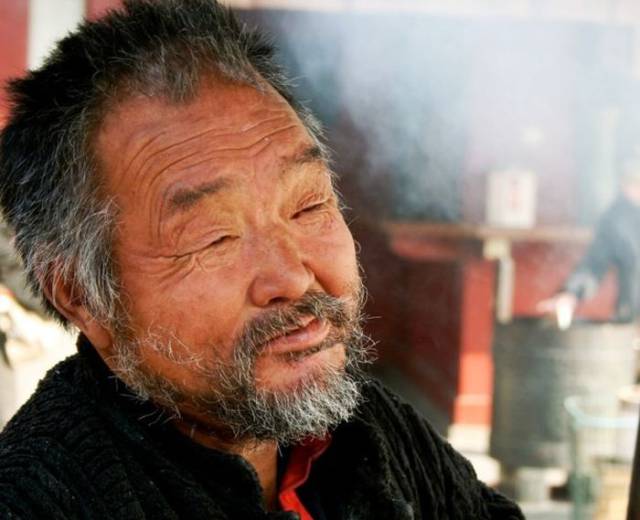 Jonas Salk, American medical researcher and virologist, discovered and developed the first successful polio vaccine. Salk could have patented the vaccine and become very rich, but he had no interest in personal profit. When asked who owned the patent to it, Salk said, "There is no patent. Could you patent the sun?” 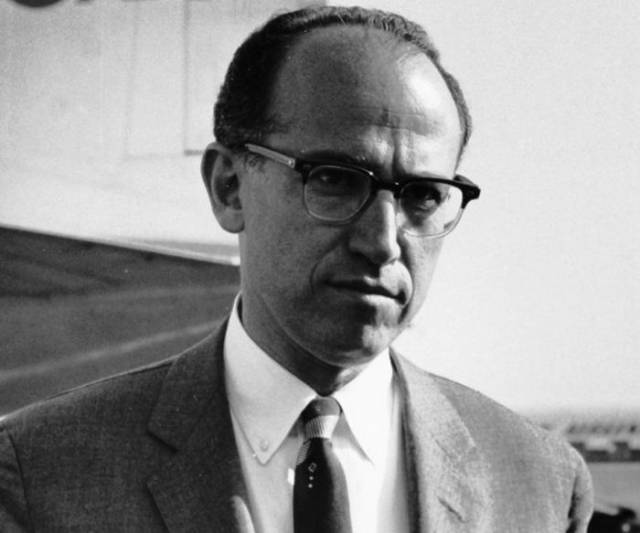 Cesar Larios, student at the Art Institute of Florida, got stuck in an elevator with an old lady when working as a mover. After some time, the lady started to have troubles standing in the elevator, so Larious dropped to all fours and acted as a human bench for her. 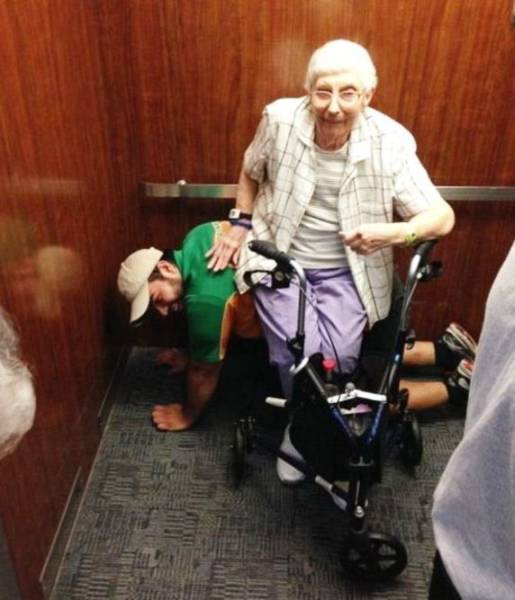 When Tom Crist from Calgary, Canada, won $40 million in lottery in May 2013, he did not spend a single dollar out of this enormous sum on anything for himself. Instead, he stayed true to his promise of giving it away, and he donated all $40 million to a cancer charity, in honor of his late wife, Jan, who died of lung cancer in February 2012. 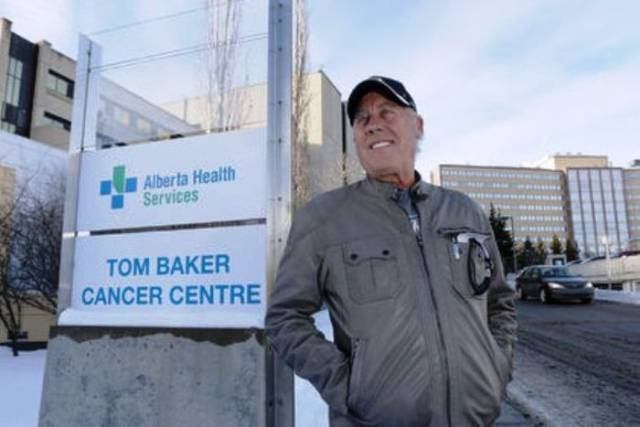 When the devastating hurricane Sandy hit the US in October 2012, this store owner helped people without power charge their phones and computers for free. 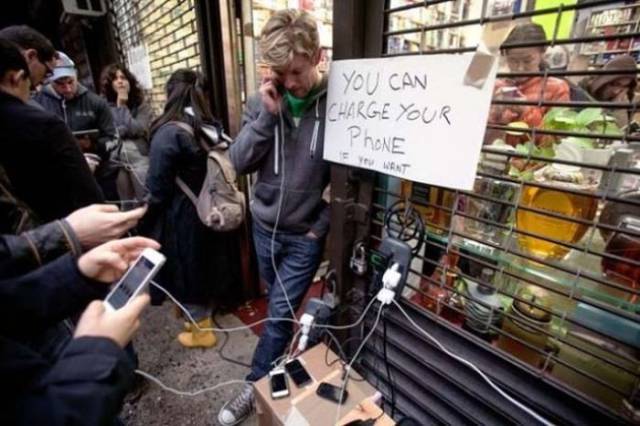 During the WWII, Nicholas Winton, British humanitarian, organized the rescue of 669 children, most of them Jewish, from former Czechoslovakia. Winton found homes for the children and arranged for their safe passage to Britain. As courageous and admirable as this act was, it was not until 1988 (almost 50 years later), when the world found out about it. 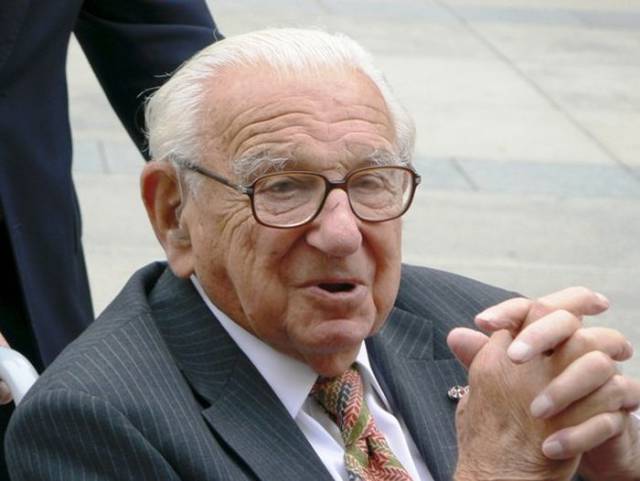 During the 2010 Zheng-Kai Marathon in China, Jacqueline Nyetipei Kiplimo, an elite Kenyan runner, saw a disabled Chinese athlete struggling to drink water. She decided to run with him and aid him through all the water stations. This slowed her time not only costing her first place (she came in second) but also the $10,000 cash prize. 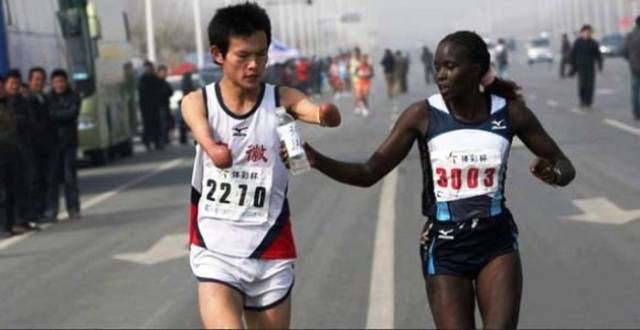 In August 2006, a skydiving group´s plane crashed near St. Louis, Missouri. Out of the eight people on board, just two survived, including Australian Kimberly Dear. Kimberly only survived thanks to the sacrifice of Robert Cook, a 22-year-old skydiving instructor who voluntarily shielded her body at the moment of the impact, losing his own life in the act. 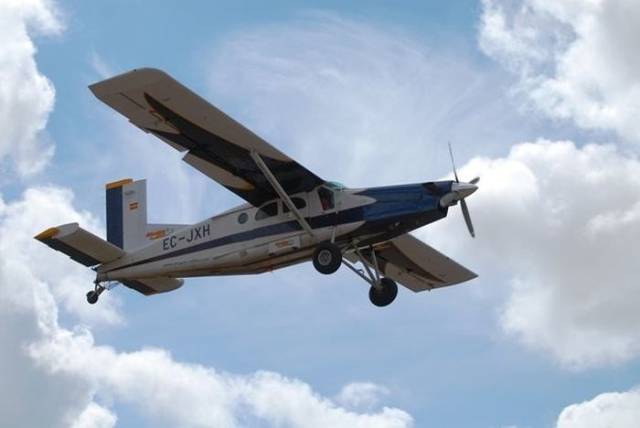 When Travis Selinka, a 10-year-old boy from Carlsbad, California, lost his hair has after weeks of radiation to treat his brain cancer in 2013, he was very apprehensive about returning to school without hair. However, his classmates at the El Camino Creek Elementary School decided to stand by his side by shaving their heads in a show of support. Travis was blown away by the gesture. 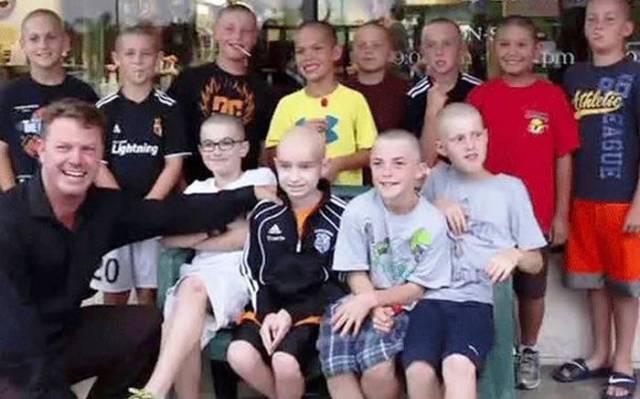 Shortly after 23 Egyptian Christians were killed in a suicidal bombing by radical Islamists in Cairo in December 2010, a group of random Egyptian Christians joined hands and formed a protective circle surrounding hundreds of Muslims who were vulnerable as they knelt in prayer in order to protect them from potential retributive attacks. 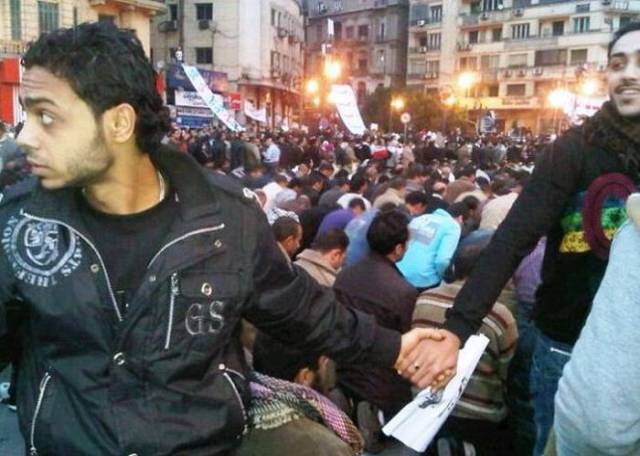 In 2013, dozens of Japanese commuters joined forces to push a 32-tonne train carriage away from the platform to free a woman who got stuck in the gap. After this amazing act of collective heroism, the woman was pulled out uninjured to applause from onlookers at the JR Minami-Urawa station north of Tokyo. 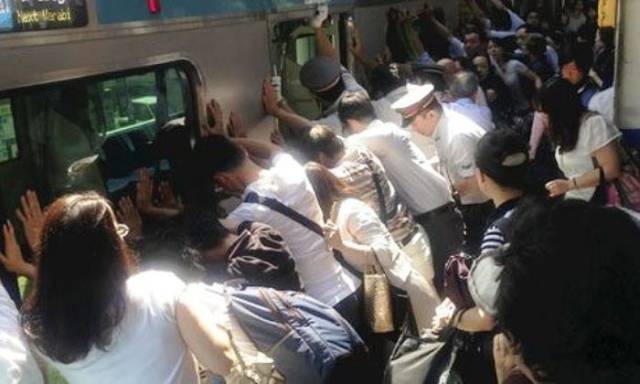 John Unger used to cradle his 19-year-old dog Schoep in a lake so the buoyancy would relieve the dog's arthritic pain. The heartbreaking picture inspired so many donations from all over the world that not only did Schoep receive top-notch care to make the rest of his life as comfortable as possible, but John was even able to start a foundation to help other dogs in need. 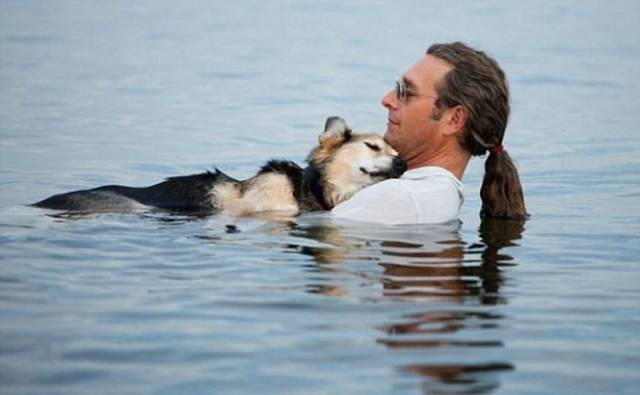 Tutor and mentor at the Valley Oaks Elementary School in Houston, Texas, Kenny Thompson took pride in helping out kids. When he found out that over 60 students at his school were eating cold sandwiches for lunch because of overdue funds on their accounts, he decided to pay off the negative balance for all of them, saying it was the best money he had ever spent. 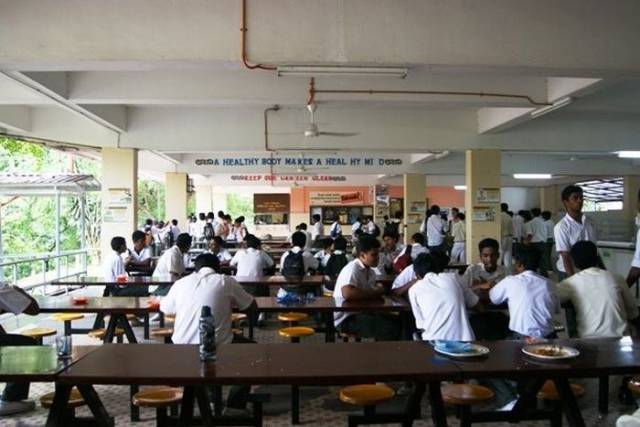 Plaza Cleaners in Portland, Oregon helped over 2,000 unemployed workers who could not afford dry cleaning by providing free service for them. 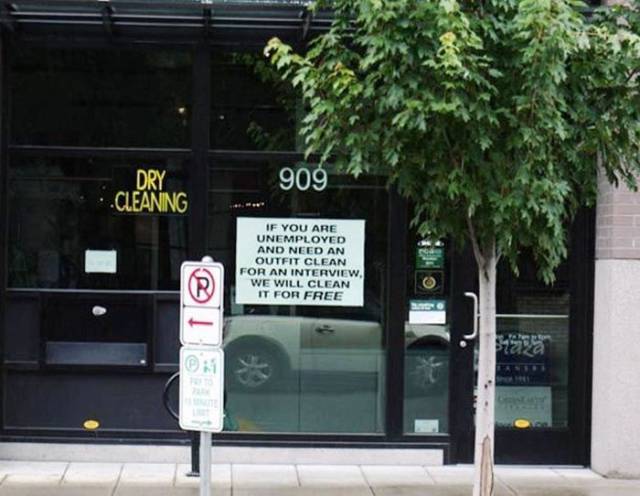 In June 2016, a chivalrous tram driver stopped his tram, got out of his cabin, and helped an old woman to cross a busy street in Prague, Czech Republic. 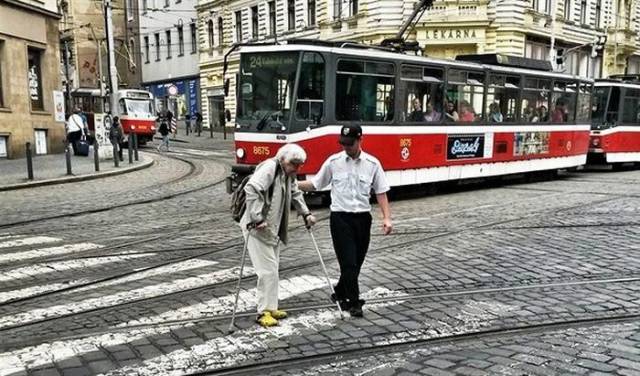 During a protest in Brazil, an officer asked the protesters not to fight on his birthday. Shortly after, they surprised him with a birthday cake. 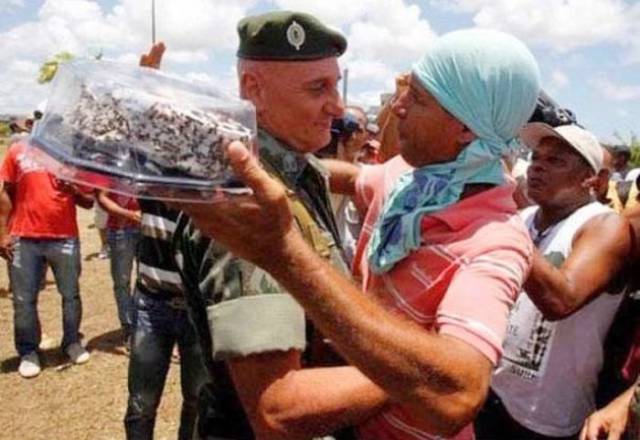 Eitan Eliahyu, an Israeli bus driver, found a bag with $25,000 in it. He searched for the bag owner and returned it to an Ethiopian cleaner who had saved up the money for his family back in Ethiopia. 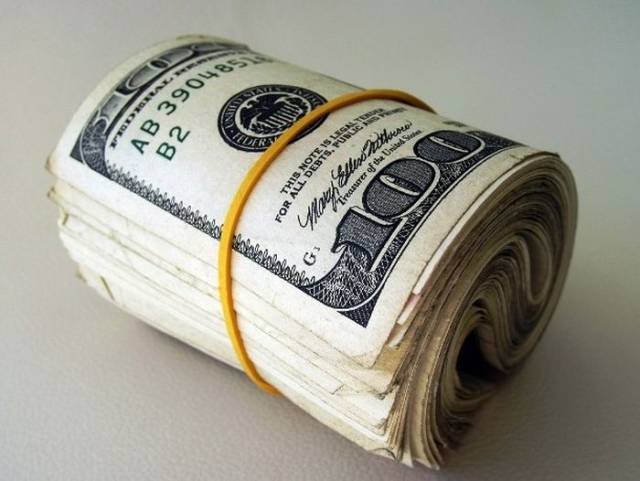 Maximilian Kolbe, Polish Conventual Franciscan friar, volunteered to die in place of a stranger Franciszek Gajowniczek in the German death camp of Auschwitz during WWII. His sacrifice did not go in vain; Gajowniczek survived the war and was later able to reunite with his wife. Kolbe was canonized in 1982 by Pope John Paul II and declared a martyr of charity. 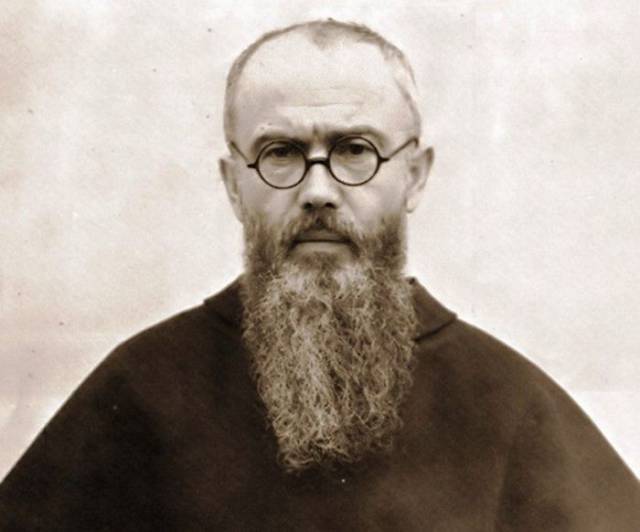 Eugene Bostick, an 80-year-old retiree from Fort Worth, Texas, spends his days taking care of stray dogs. A skillful welder, he even hand-made a special dog train to take the dogs on fun rides around the neighborhood and in the surrounding woods. 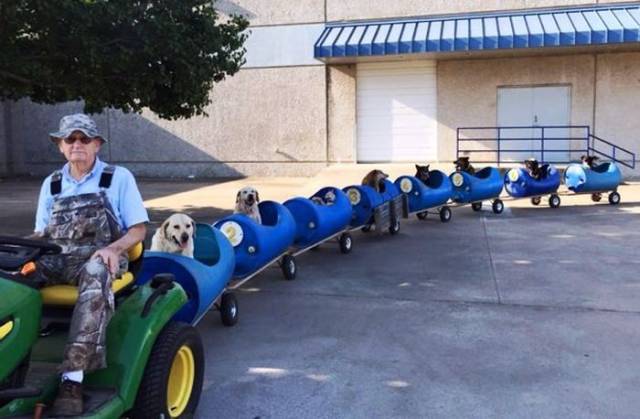 In 2012, then 17-year-old Meghan Vogel, a junior at West Liberty Salem High School in western Ohio, did an extraordinary act of kindness at the regional 3200-meter finals in Columbus, Ohio. Instead of trying to produce the best finish, Vogel took care of her exhausted rival Arden McMath who collapsed on the track, and she carried her across the finish line. 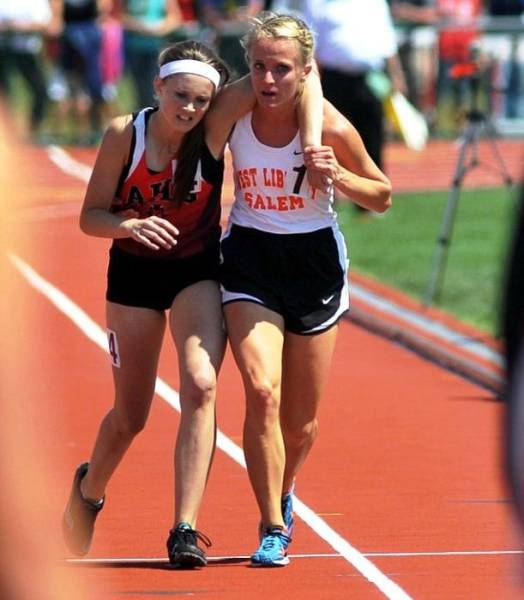 This young Egyptian woman spends her time teaching a street vendor’s child how to read and write every day after exiting the subway. 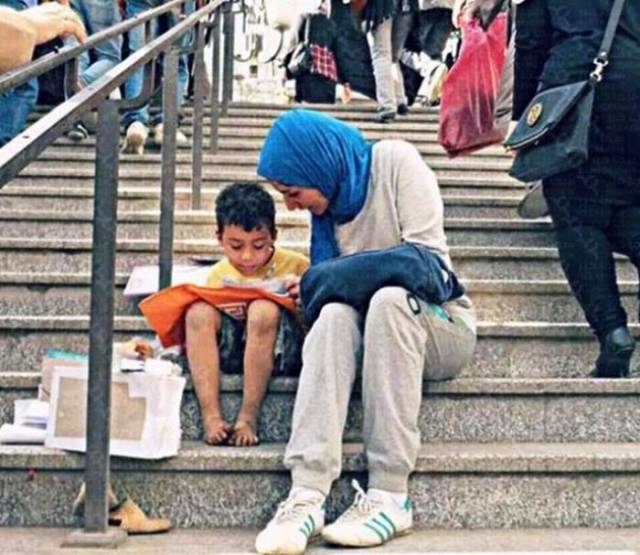 An Australian family honored their dog Phoebe in an original and very kind way by placing a plastic bin filled with tennis balls at a beach. The sign reads: “Please help yourself to a tennis ball for your dog to enjoy. You may wish to pop it back in the box afterwards for another pooch to enjoy. Remember to live each moment just like your dog; with unconditional love, loyalty and happiness.” 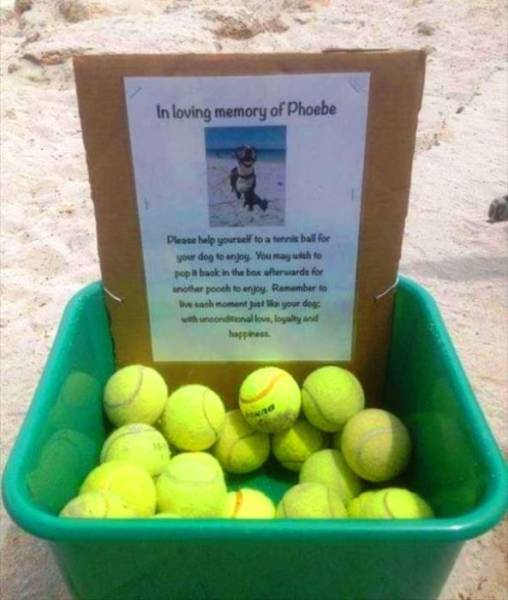 This brave police officer handcuffed himself to a woman who was trying to commit suicide in Beijing, China. The woman knew that if she died, she would take the policeman with her and that seemed to bring her back. The officer later hauled her back onto the building where he stood. 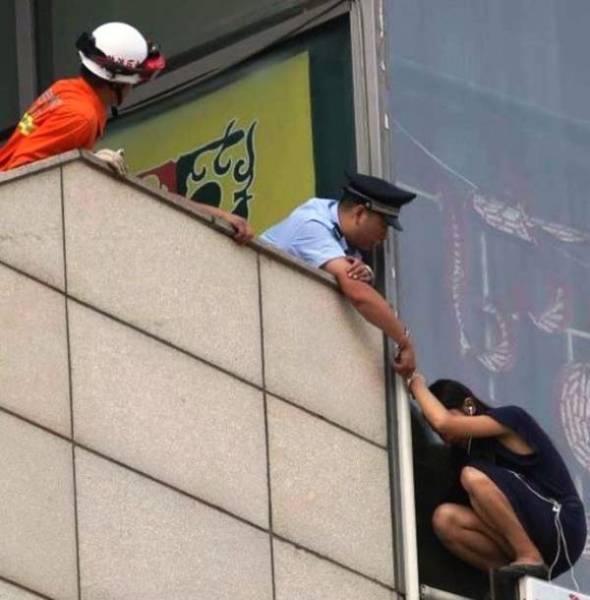 When homeless man Billy Ray Harris returned a $4,000 diamond engagement ring to Sarah Darling, who had accidentally dropped it into his change cup, he could not know this incident would turn his life upside down. His extraordinary act of kindness touched many people, and they donated $180,000 to Billy. The honest finder bought a house and a car with the donated money and even found a job. 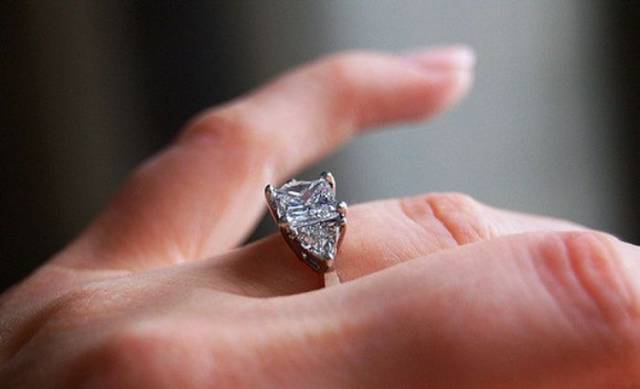 When police swear to protect and serve, they do not just mean the first part. Two policemen in Portland, Oregon went above and beyond the line of duty when they finished off a driver's pizza delivery after he had been involved in a car accident. 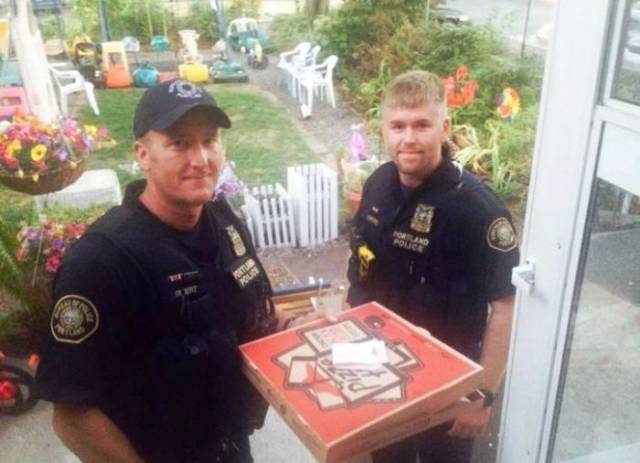