*WARNING: THERE MAY BE SPOILERS INCLUDED* 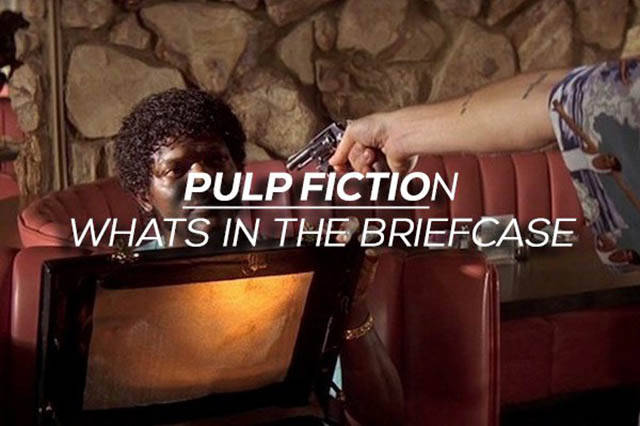 The conspiracy: The briefcase contains Marcellus Wallace’s soul. The beginning of the movie is Vincent (John Travolta) and Jules (Samuel L. Jackson) retrieving the soul for their boss.

The evidence: The briefcase has a combination of 666 and, because the hitmen were supposedly doing god’s work, he intervened and the bullets that should have killed them, mysteriously all missed. Some bullets appearing to pass right through them. 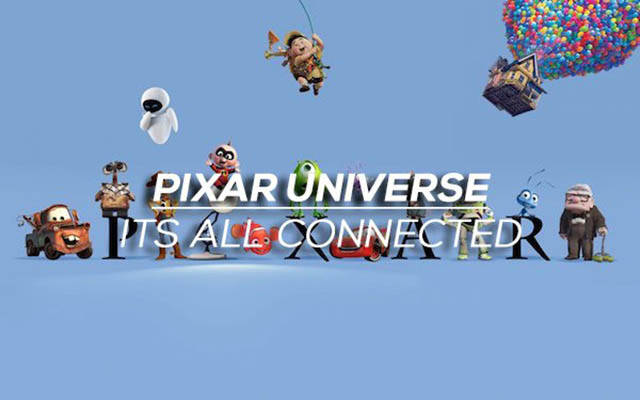 The conspiracy: All Pixar movies actually exist in the same universe and are directly connected to one another.

The Evidence: The superhuman powers in The Incredibles are an extension of the magic of Brave, the cars in the Cars movies populate the abandoned Earth from Wall-E, also inhabited by the monsters of Monsters Inc. whose doors to the human world are actually time portals.

For more on this one visit pixartheory.com 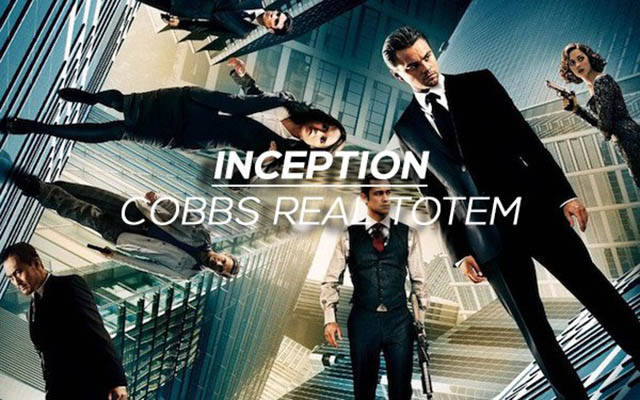 The Conspiracy: Throughout the movie when we see Cobb’s (Leonardo Dicaprio) spinning top, we aren’t actually seeing his totem. His real totem is his wedding ring.

The Evidence: This evidence is more of a grasp at interpreting the ending than anything. Cobb always take the ring off in the real world, but is always seen wearing it in the dream world. At the end of the movie he has no ring on. Interpret this one how you wish. 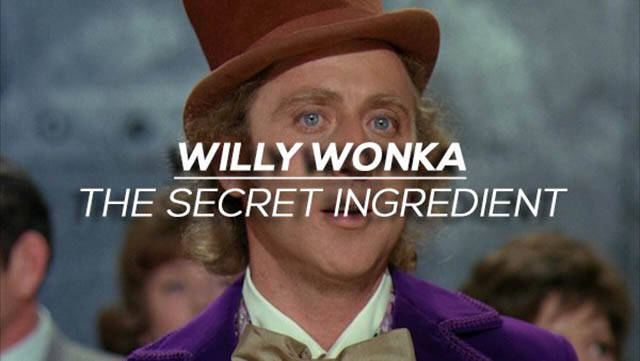 The Conspiracy: The secret ingredient that makes Willy Wonka’s chocolate so good is actually children.

The Evidence: None of the children are seen again at the end of the movie. They could be back out in the real world living their lives or… The tube that sucks up Augustus Gloop is far bigger than it needs to be to syphon chocolate. Violet becomes a blueberry, a sweet ingredient. Mike TV is shrunk down literally to “bite size”.

Further evidence lies in the book (Spoiler if you plan to read). There is a sixth golden ticket in the book which goes to Miranda Piker. She meets her end when her and her father fall down a chute into a powder-grinder. Afterwards, the mother actually accuses Wonka of intentionally killing them, to which Wonka replies, “Of course. That’s part of the recipe.” 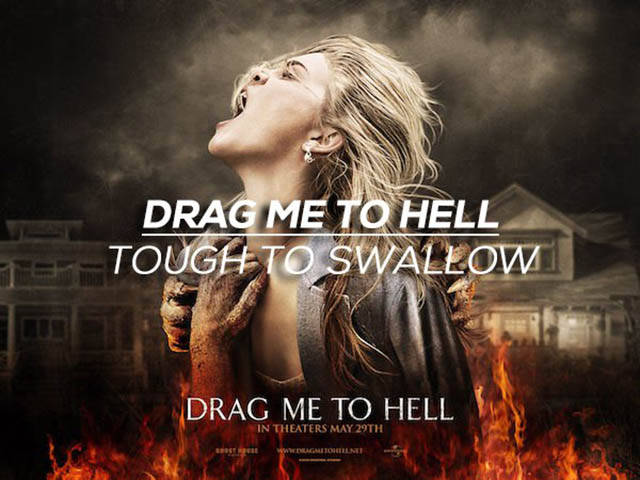 The Theory: Drag Me To Hell is actually the hallucinations of a girl struggling with bulimia.

The Evidence: First, you never see the main character eat anything. Second, nearly every perverse, terrifying and grotesque thing that happens to her, seems to relate somehow to the digestive process – including the delightful scene where a corpse vomits in her mouth. 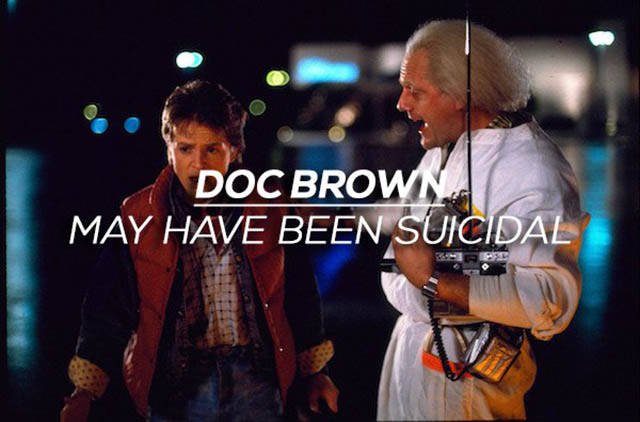 Evidence: Doc is suicidal because the Libyans are after him, his best friend is a teenager and he’s mostly a complete failure as an inventor. He steers the Delorean directly at himself and Marty, unnecessarily. He even keeps Marty from running while he steers the time machine for them. 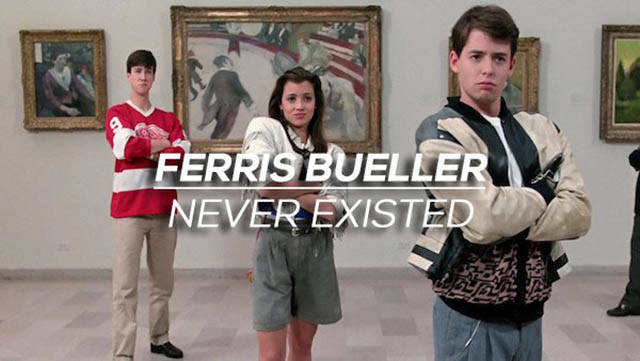 The Conspiracy: Ferris Bueller is a figment of Cameron’s imagination.

The Evidence: Though this theory may actually make the most sense, the evidence is the sparsest. Essentially, the evidence rests on Bueller exhibiting every quality that Cameron is lacking, essentially being the perfect version of Cameron (according to Cameron). Cameron himself is a depressed, introverted loser. It also becomes apparent that although Ferris makes all these outlandish claims, lies and actions, Cameron somehow winds up dealing with all of the consequences. Very Fight Club-esque if you think about it.

Evidence: When the genie leaves the lamp, he tells Aladdin his clothes are “so third century.” However, if the genie has been locked inside the lamp for 10,000 years, he would have no recollection of what the third century would have been like. Further evidence is Genie performing impersonations of famous celebrities such as Groucho Marx and Jack Nicholson, who wouldn’t even have existed yet. 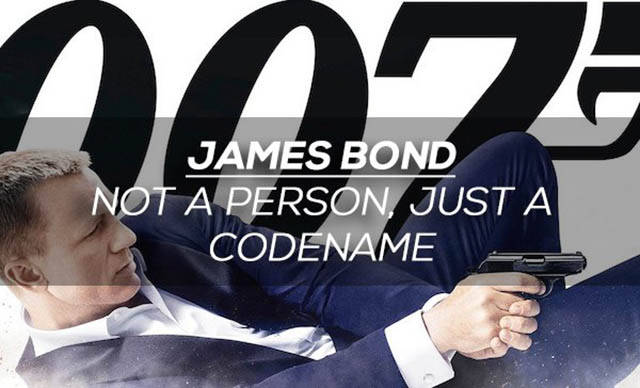 The Conspiracy: James Bond is not one particular agent, but a code name given to each agent as the previous retires.

The evidence: Though unintentional and not relevant to the books, this actually makes perfect sense in the movie universe. Bond remains an untouched 30-something while everyone around him has aged mercilessly. Further evidence lies in the fact that the titles “M” and “Q” are also passed down from agent to agent. I wonder what Ian Flemming would think.

The Conspiracy: Tom Cruise’s character actually imagines the majority of the events of the movie while being held in captivity.

The Evidence: Cruise’s character is actually locked away, for what we perceive is a short time, in the iJail where prisoners brains, “remain free to dream.” Could it be he never left the iJail? The ending, which sees the psychics living out their lives in some perfectly idealistic cabin that looks completely out of place, lends a lot of support to this one.