Stunning Photos That Show How Incredibly Crowded China Is (23 pics)

China has the population of over 1.381 billion which is constantly growing. Plus, as of 2015 the country has dropped their “one child policy.” Today, Chinese couples are allowed to have 2 children per household. The government hopes that it will help to balance the country’s demographics. In the meantime, their population will continue to grow even faster now. And as you will see in these pictures, China is already very crowded…

Examinees walk into the entrance of a classroom building to take part in a three-day entrance exam for postgraduate studies in Hefei, Anhui province. A record 1.8 million people applied to attend this exam in 2013. 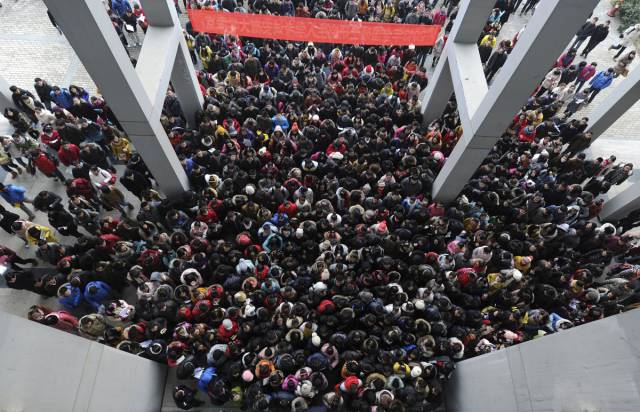 Students take an exam at a high school's open-air playground in Yichuan, Shaanxi province. More than 1,700 freshmen students took part in the exam in 2015, which the school moved outside because of insufficient indoor space. 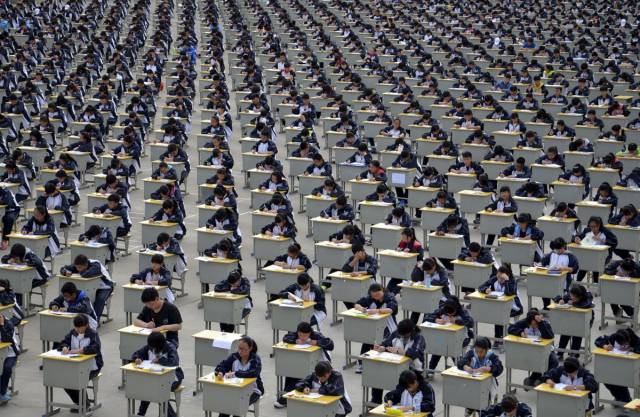 Laundry hangs outside student housing at a university in Wuhan, Hubei province. 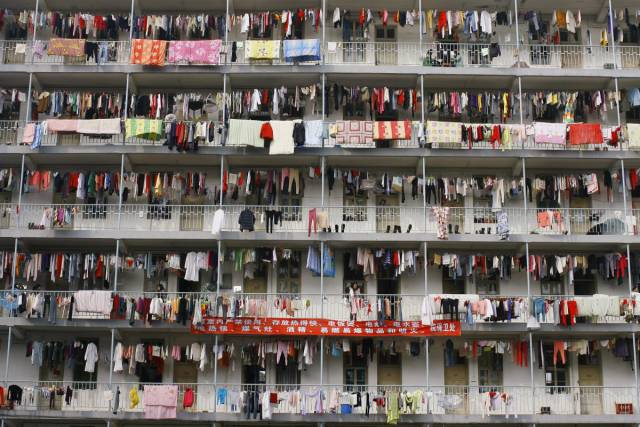 Parents sleep on mats laid out on a gymnasium floor inside a university campus in Wuhan. 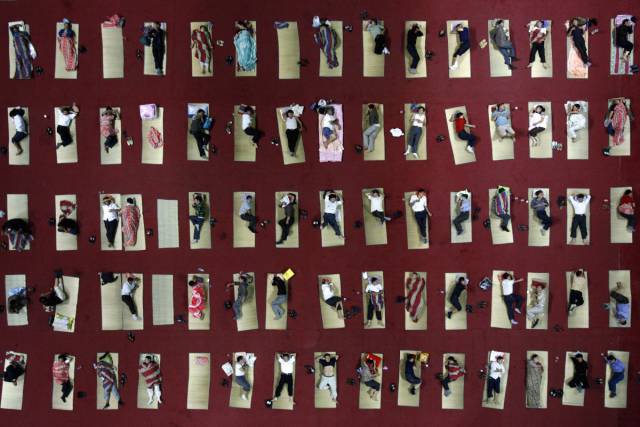 A woman collects her bicycle from a parking lot outside of a subway station in Beijing. 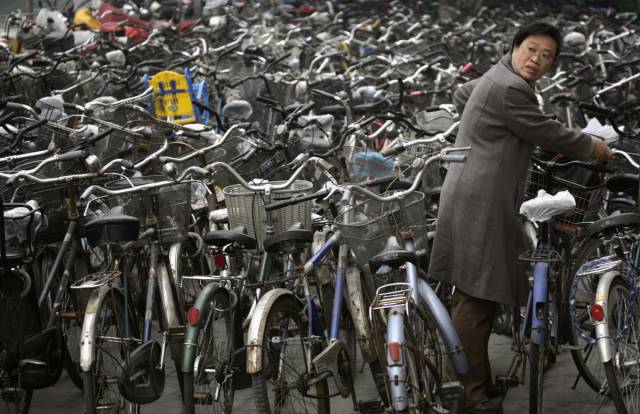 People ride escalators and walk down the stairs on their way to a subway platform during rush hour in Beijing. 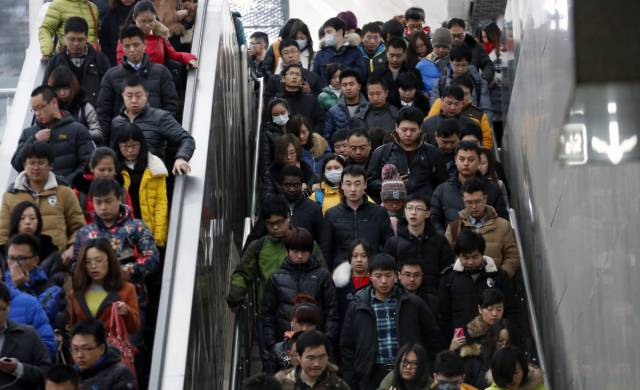 An eager crowd waits as a residential compound opens for sale in Hangzhou, Zhejiang Province. 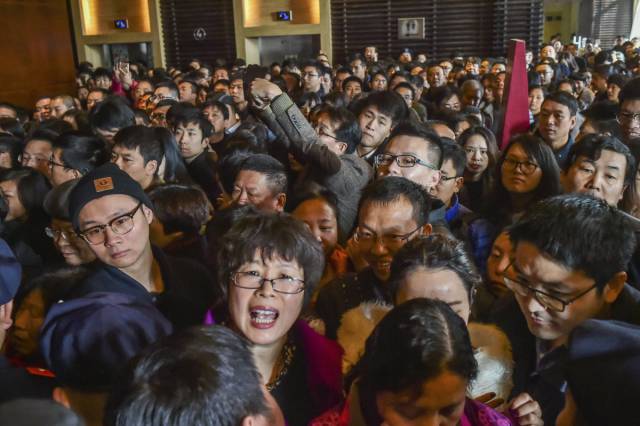 Passengers flood a railway station on the first day of the Chinese Mid-Autumn festival holiday in Wuhan, Hubei province. 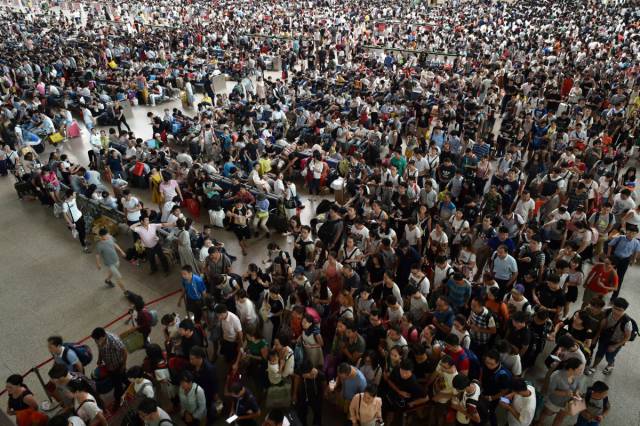 They slowly make their way to the escalators to access the train tracks. 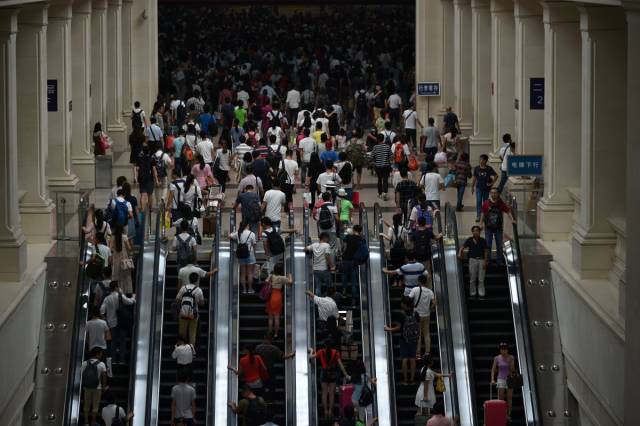 Passengers wait to get into the crowded Zhengzhou Railway Station on the first day of "the Golden Week," a holiday that celebrates the founding of the People's Republic of China. According to the China Tourism Academy, a total of 480 million trips were estimated to be made within those seven days. 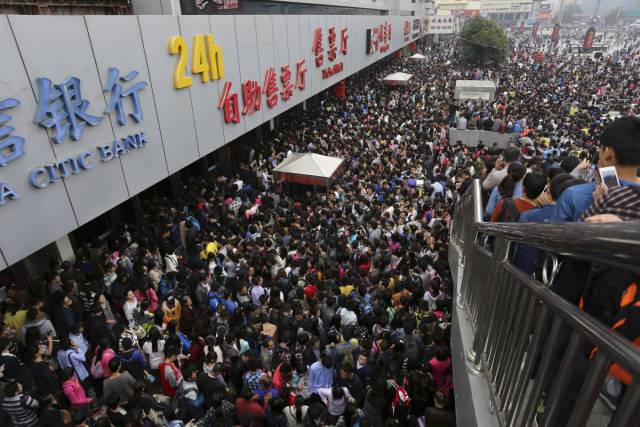 Taxi drivers line up in a parking lot while waiting for passengers at the new Beijing Capital International Airport. 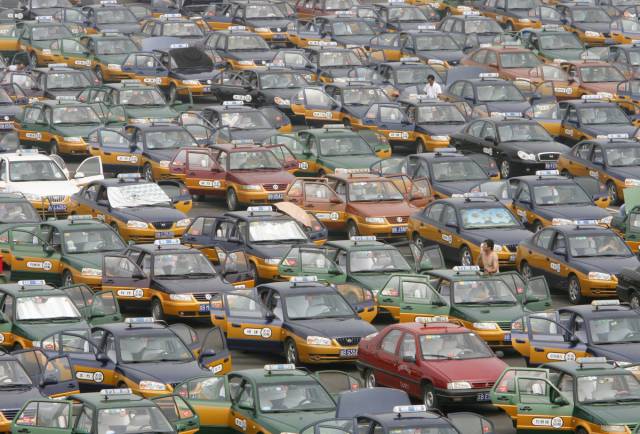 Junior college students line up outside a job fair in 2014. Around 50,000 people attended this one job fair in Zhengzhou, Henan province. 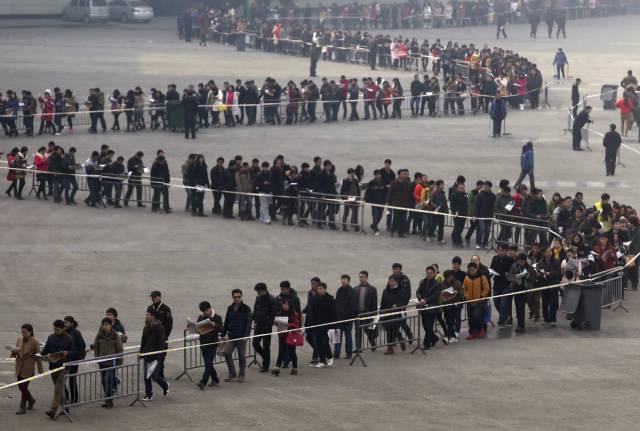 Thousands of job seekers visit booths inside a job fair in Chongqing. 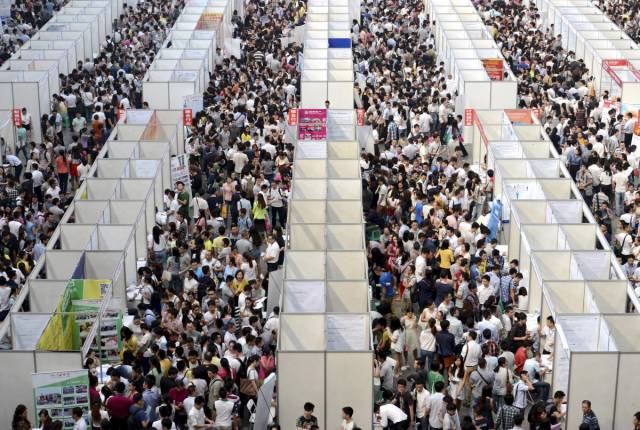 Over 1,000 paramilitary policemen take part in an exercise in Nanjing, Jiangsu province. 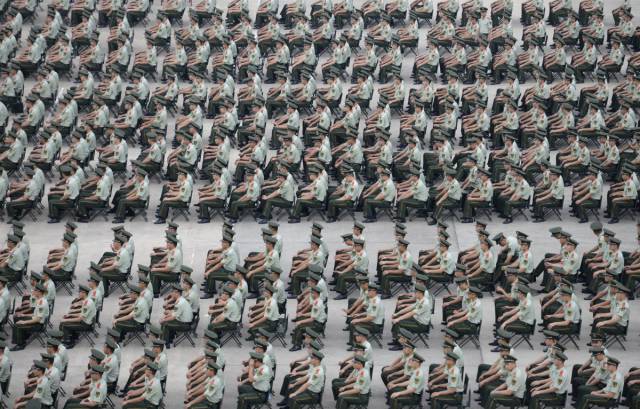 People buy vegetables at a morning market in Beijing. 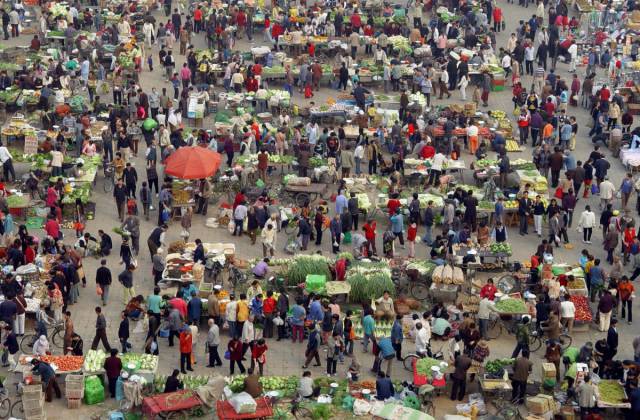 Large crowds walk under a row of trees decorated with fans and red lanterns at a temple fair celebrating the Chinese New Year in Beijing. 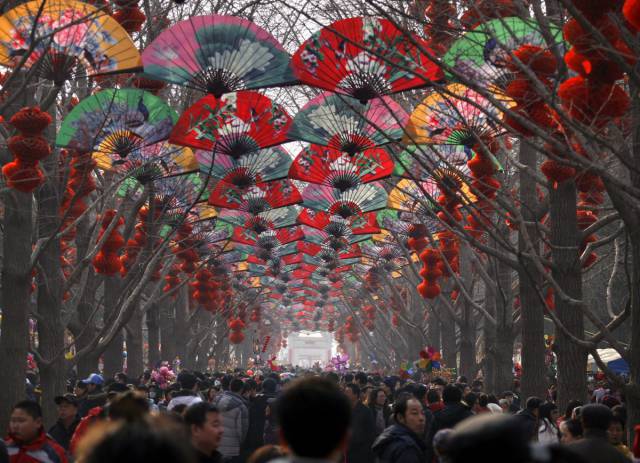 People crowd on a beach in Dalian, Liaoning province, to escape the summer heat. 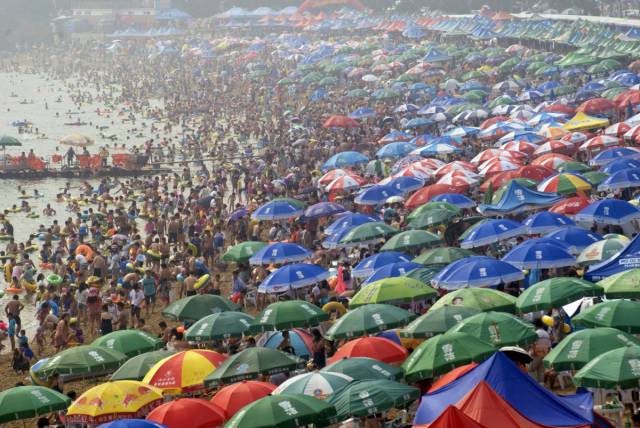 A tourist resort in Daying County provides another escape from the summer heat. 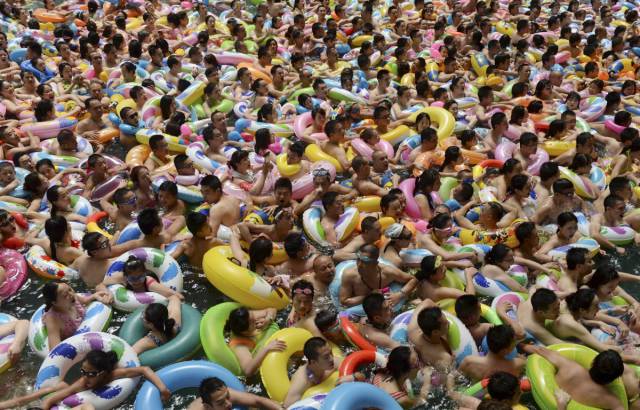 Visitors participate in the annual water-splashing festival to mark the New Year of the Dai minority in Xishuang Banna, Yunnan province.

Worshippers wait at the entrance of Guiyuan Buddhist Temple in Wuhan to burn offerings on the fifth day of the Chinese Lunar New Year. Hundreds of millions packed temple fairs and set off fireworks for the traditional weeklong holiday. 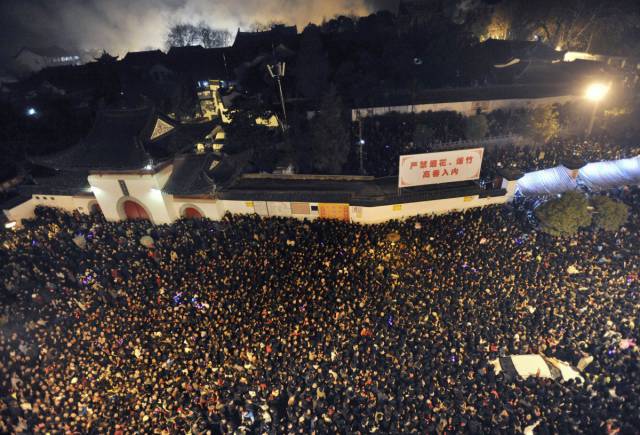 Visitors get in line to see the soaring tide near the bank of Qiantang River in Hangzhou, Zhejiang province. Tidal waves are at their highest during the month of September. 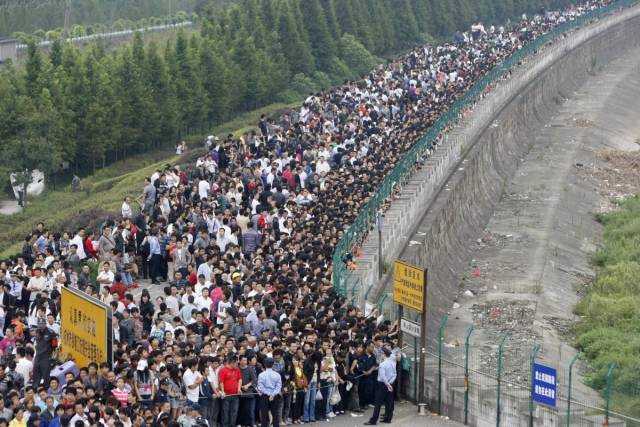 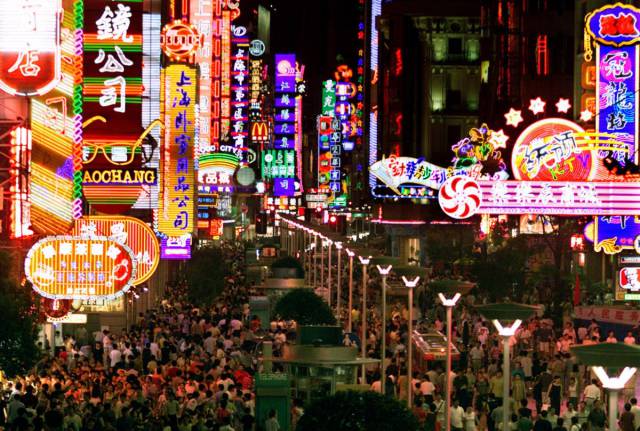 Vehicles are seen on a main Beijing avenue during the evening rush hour. 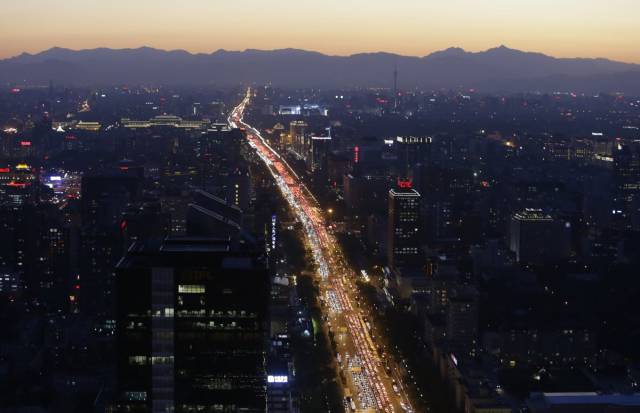