These Beautiful Photos From Above Will Amaze You (24 pics)

The Arlit uranium mine is located in Arlit, Niger. French nuclear power generation, as well as the French nuclear weapons programme, are both dependent on the uranium that is extracted from the mine – more than 3,400 tonnes per year. 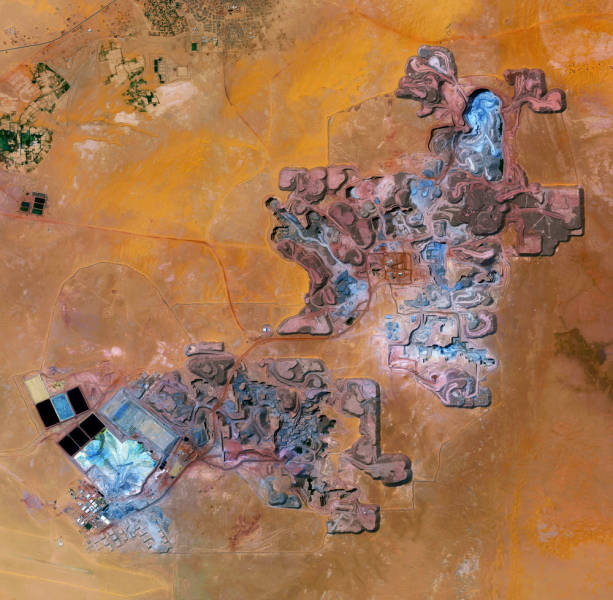 Hagadera, seen here on the right, is the largest section of the Dadaab refugee camp in northern Kenya and is home to 100,000 refugees. To cope with the growing number of displaced Somalis arriving at Dadaab, the UN has begun moving people into a new area called the LFO extension, seen here on the left. Dadaab is the largest refugee camp in the world with an estimated total population of 400,000. 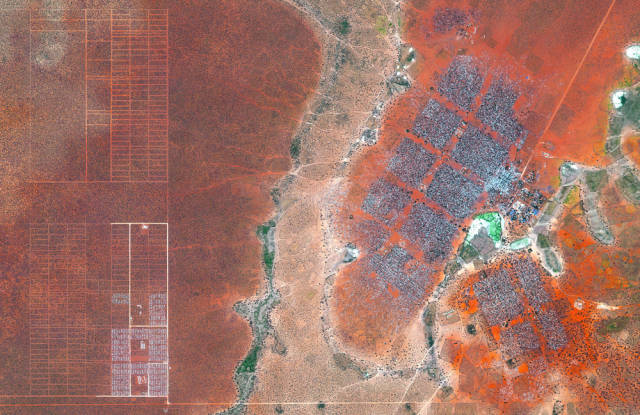 Dallas/Fort Worth International airport stretches across 70 sq km (27 sq miles) in Texas, US. The facility is the tenth busiest airport in the world by passenger traffic, accommodating more than 64 million passengers each year. 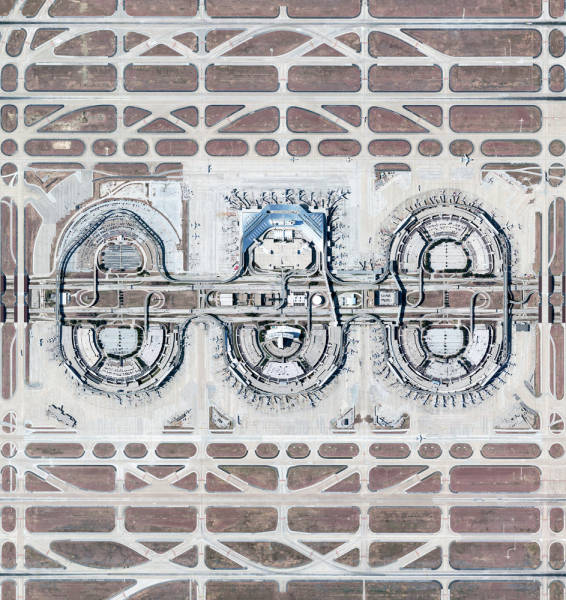 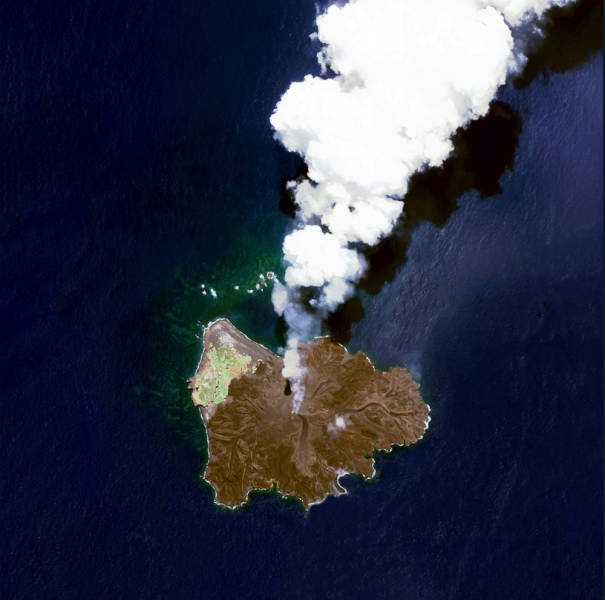 The planned city of La Plata – the capital city of the Province of Buenos Aires, Argentina – is characterised by its strict, square grid pattern. At the 1889 World's Fair in Paris, the new city was awarded two gold medals in the categories “City of the Future” and “Better Performance Built”. 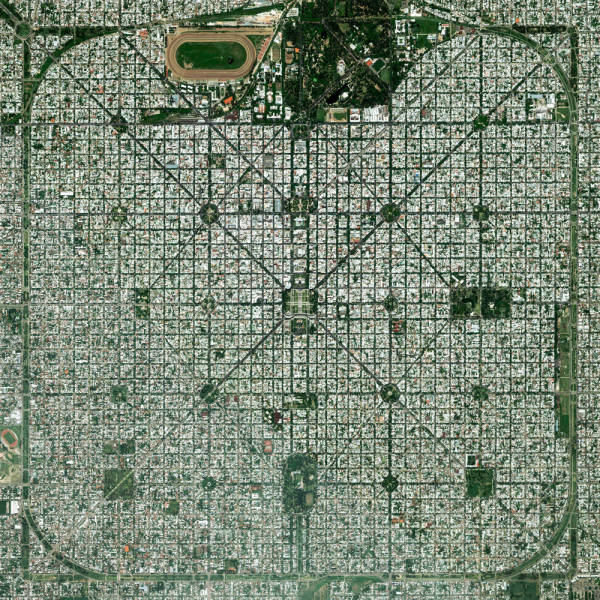 Angkor Wat, a temple complex in Cambodia, is the largest religious monument in the world (first it was Hindu, then Buddhist). Constructed in the 12th century, the 820,000 sq metre (8.8m sq ft) site features a moat and forest that harmoniously surround a massive temple at its centre. 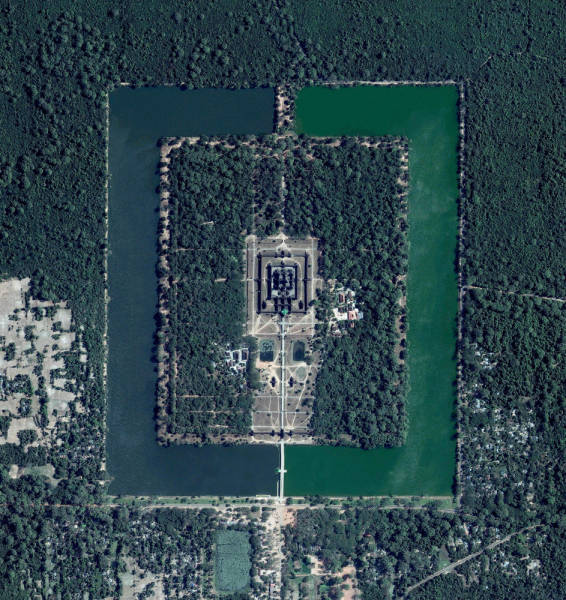 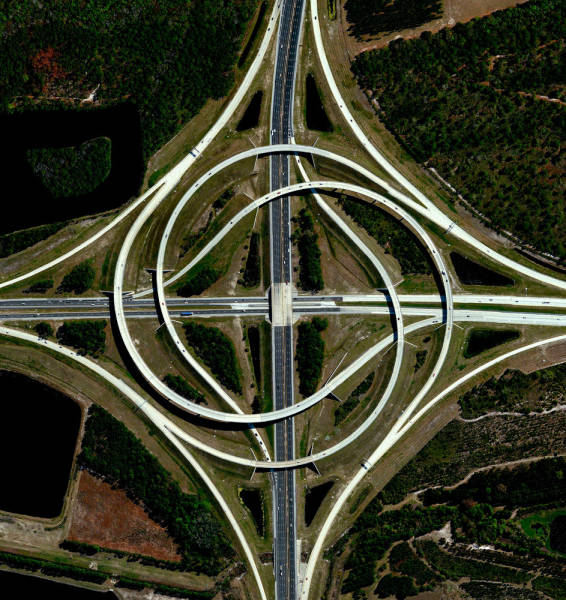 Sun Lakes, Arizona, USA is a planned community with a population of approximately 14,000 residents, most of whom are senior citizens. According to US census data, only 0,1% of the community's 6,683 households are home to children under the age of 18. 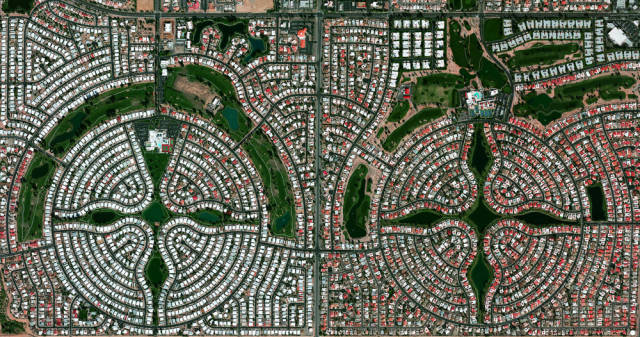 Moored houseboats float peacefully on the New Bullards Bar Reservoir in Yuba County, California, USA. Due to a severe drought that has hit the state over the past four years, there is less space to anchor on the lake and many houseboats have been moved to a nearby onshore storage area. 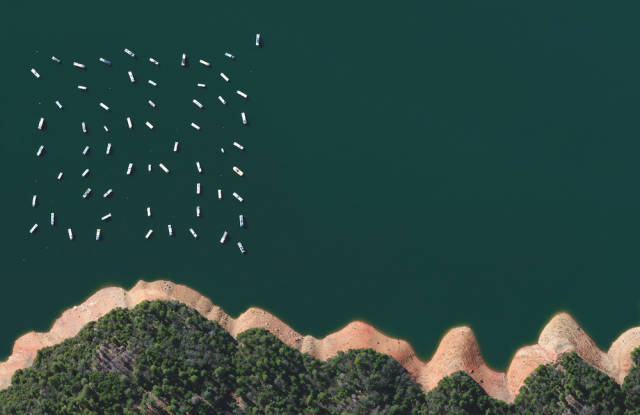 Cargo ships and tankers – some weighing up to 300,000 tonnes – wait outside the entry to the Port of Singapore. The facility is the world's second-busiest port in terms of total tonnage, shipping a fifth of the world's cargo containers and half of the world's annual supply of crude oil. 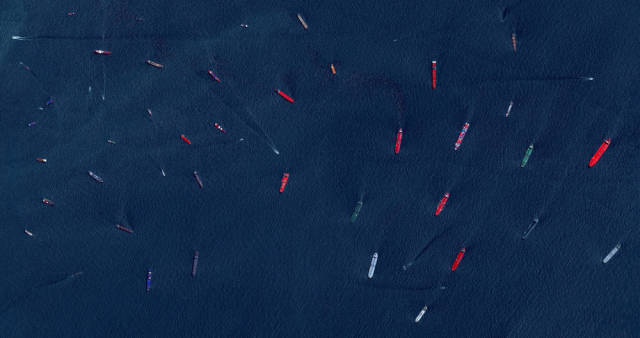 Ipanema Beach is located in the South Zone of Rio de Janeiro, Brazil. Recognised as one of the most beautiful beaches in the world, the sand is divided into segments by lifeguard towers known as “postos”. 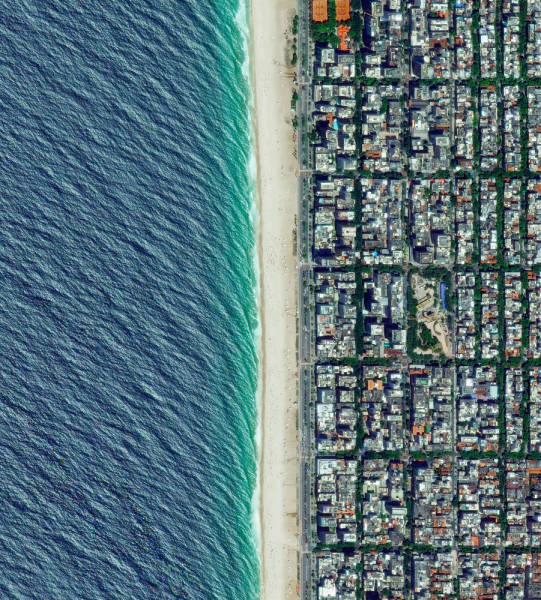 Central Park in New York City, USA spans 341 hectares (843 acres), which is 6% of the island of Manhattan. One of the most influential innovations in the park's design was its “separate circulation systems” for pedestrians, cyclists, horse riders, and cars. The park contains numerous tennis courts and baseball fields, an ice-skating rink, and a swimming pool. It also serves as the finish line for the New York City Marathon and New York City Triathlon. 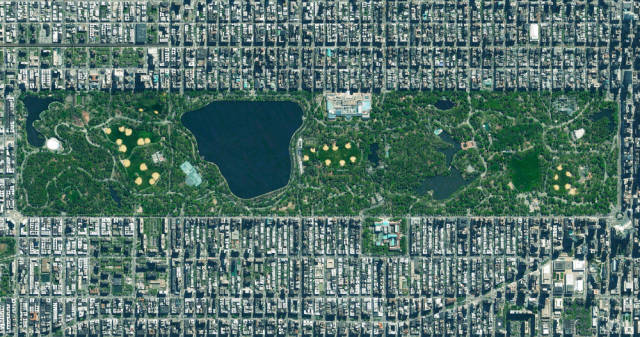 Tailings are the waste and by-products generated by mining operations. The tailings seen here were pumped into the Gribbens Basin, next to the Empire and Tilden Iron Ore Mines in Negaunee, Michigan, USA. Once the materials are pumped into the pond, they are mixed with water to create a sloppy form of mud known as slurry. The slurry is then pumped through magnetic separation chambers to extract usable ore and increase the mine's total output. For a sense of scale, this Overview shows approximately 2.5 square kilometres (1 square mile) of the basin. 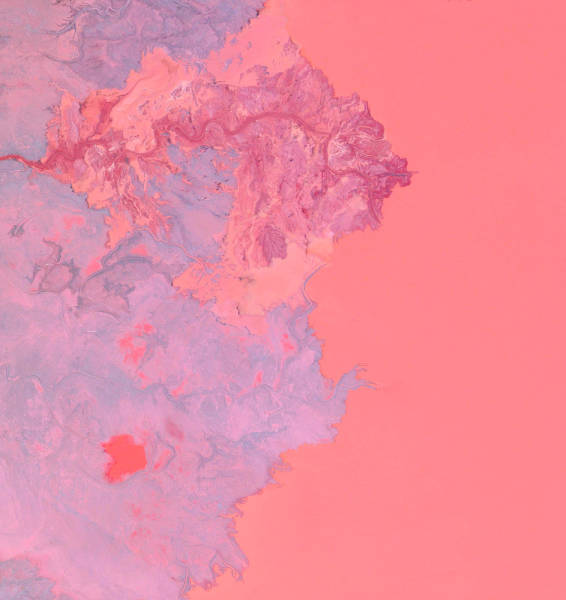 Burning Man is a week-long, annual event held in the Black Rock Desert of Nevada, USA. Drawing more than 65,000 participants each year, the event is described as an experiment in community, art, self-expression, and radical self-reliance. 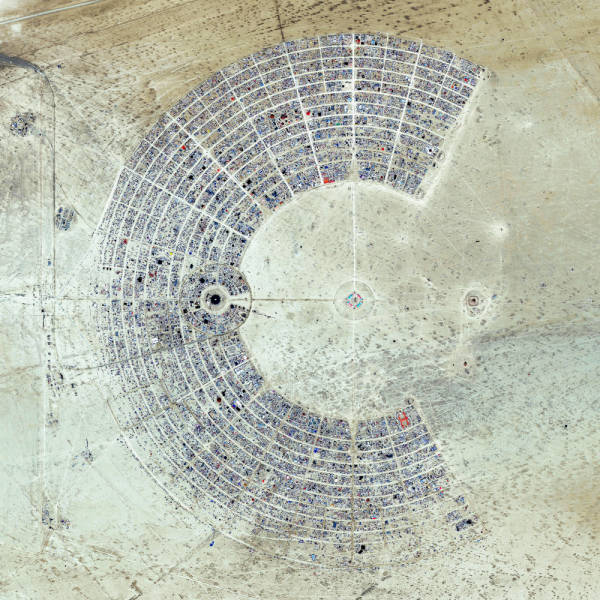 The Eixample District in Barcelona, Spain is characterised by its strict grid pattern and apartments with communal courtyards. This thoughtful and visionary design was the work of Ildefons Cerdà (1815–1876). His plan features broad streets that widen at octagonal intersections to create greater visibility with increased sunlight, better ventilation, and more space for short-term parking. 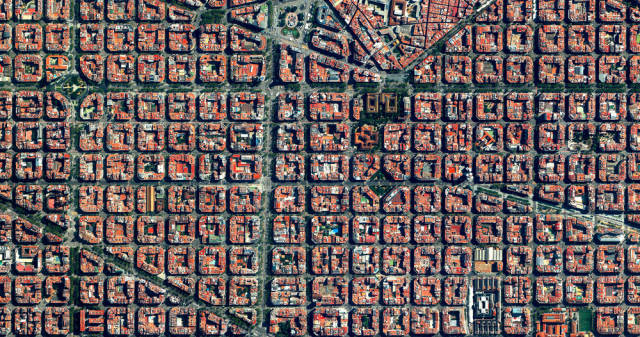 Rub' al Khali, or The Empty Quarter, is the largest sand desert in the world. It covers 650,000 square kilometres (251,000 square miles), and includes parts of Saudi Arabia, Oman, Yemen, and the United Arab Emirates. In the centre of the desert there are a number of raised, hardened formations that were once the sites of shallow lakes, thousands of years ago. For a sense of scale, this Overview shows approximately 350 square kilometres (135 square miles) in Saudi Arabia, near the border with Oman. 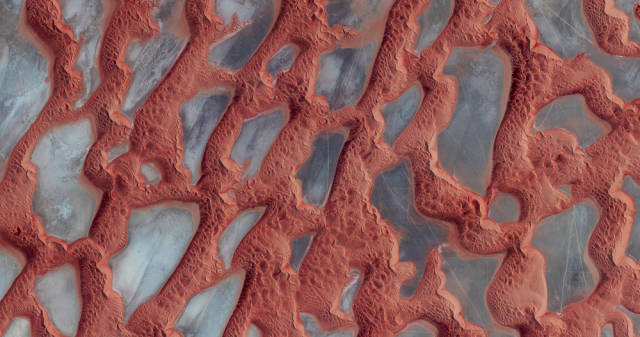 The villas of Marabe Al Dhafra in Abu Dhabi, United Arab Emirates are home to approximately 2,000 people. Located in one of the hottest regions of the world, the record high temperature here is 49.2C° (120.6F°). 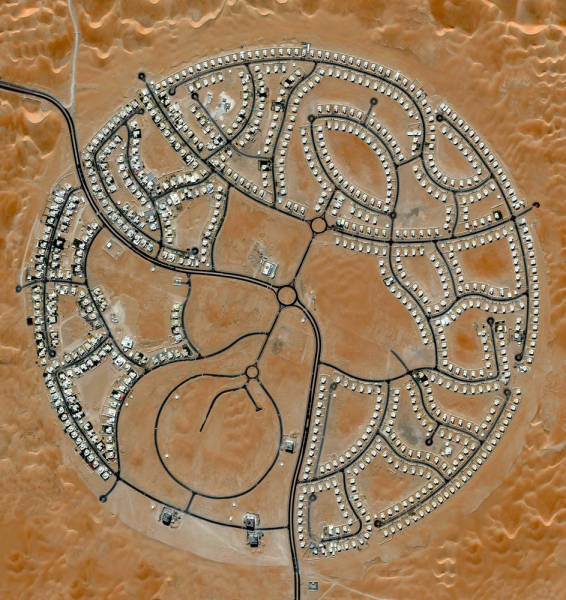 Dendritic drainage systems are seen around the Shadegan lagoon by Musa Bay in Iran. The word “dendritic” refers to the pools’ resemblance to the branches of a tree, and this pattern develops when streams move across relatively flat and uniform rocks, or over a surface that resists erosion. 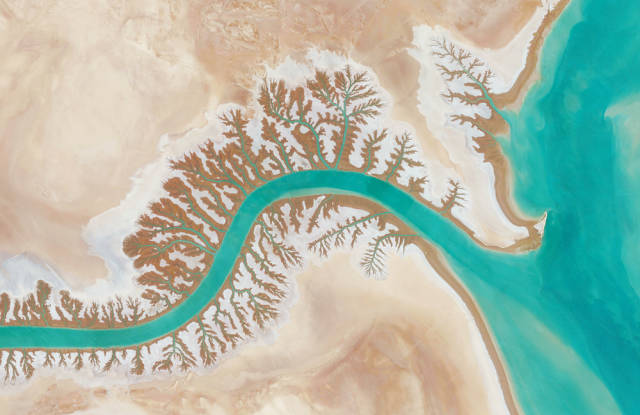 The coal terminal at the Port of Qinhuangdao in China is the largest coal shipping facility in the country. From here, approximately 210 million tonnes of coal are transported to coal-burning power plants throughout southern China every year. In 2015, new data from the Chinese government revealed that the country has been burning up to 17% more coal each year than previously disclosed. The sharp upward revision in official figures means that China has been burning an additional 600 million tonnes of coal each year, and has released much more carbon dioxide – almost a billion more tonnes per year – than previously estimated. 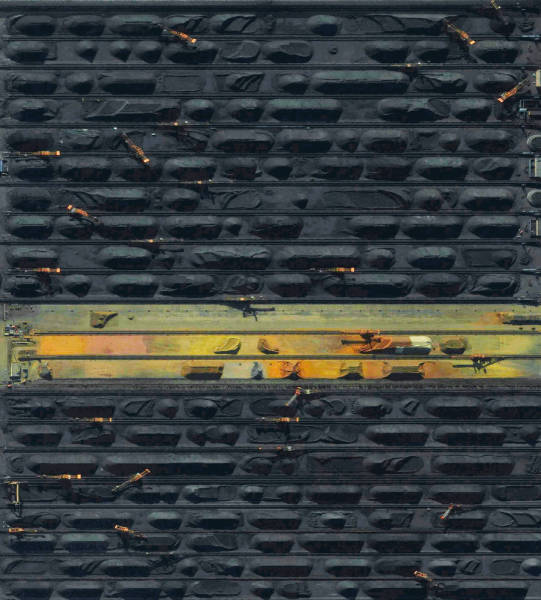 The largest aircraft storage and preservation facility in the world is located at Davis-Monthan Air Force Base in Tucson, Arizona, USA. The boneyard – run by the 309th Aerospace Maintenance and Regeneration Group – contains more than 4,400 retired American military and government aircrafts. 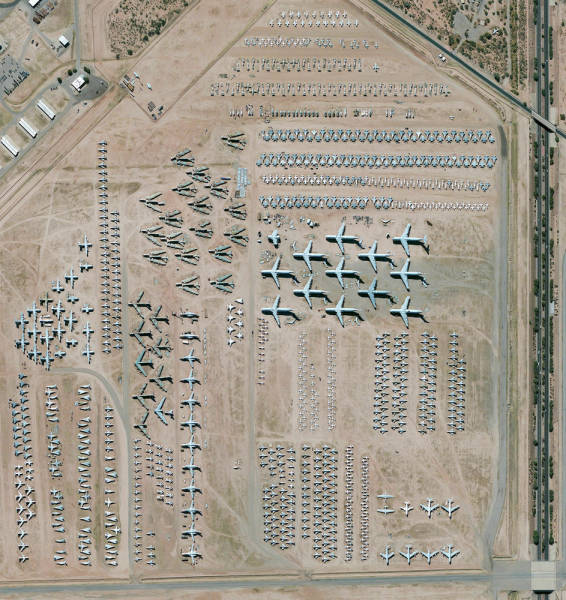 Olive tree groves cover the hills of Córdoba, Spain. Approximately 90% of all harvested olives are turned into oil; the remaining 10% are eaten as table olives. With rising temperatures and phenomenal weather variations in growing regions, olive groves on high hills or slopes will probably suffer less, but groves located on low-altitude areas or plains could become totally unproductive. 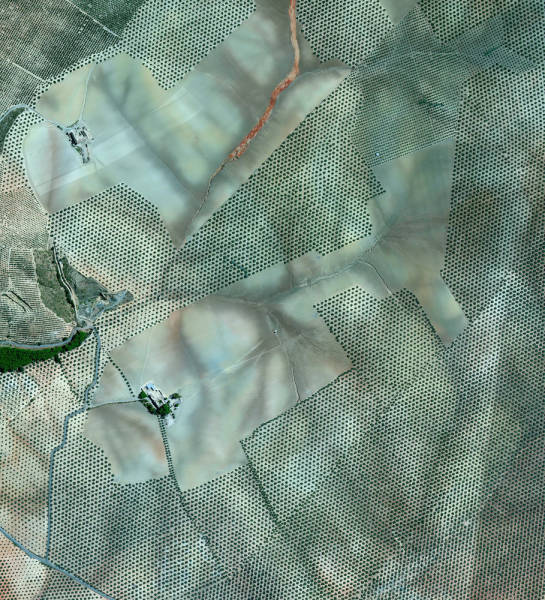 This Overview captures the Gemasolar Thermosolar Plant in Seville, Spain. The solar concentrator contains 2,650 heliostat mirrors that focus the sun's thermal energy to heat molten salt flowing through a 140-metre-tall (460-foot) central tower. The molten salt then circulates from the tower to a storage tank, where it is used to produce steam and generate electricity. In total, the facility displaces approximately 30,000 tonnes of carbon dioxide emissions every year. 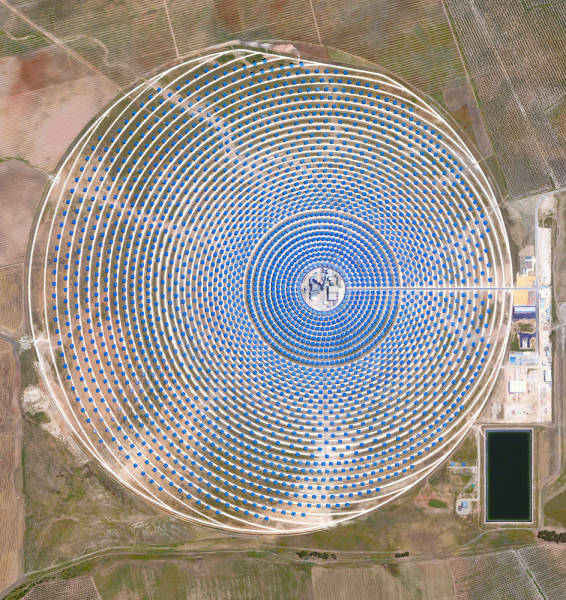 Evaporation ponds are visible at the potash mine in Moab, Utah, USA. The mine produces muriate of potash, a potassium-containing salt that is a major component in fertilisers. The salt is pumped to the surface from underground brines and dried in massive solar ponds that vibrantly extend across the landscape. As the water evaporates over the course of 300 days, the salts crystallise out. The colours that are seen here occur because the water is dyed a deep blue, as darker water absorbs more sunlight and heat, thereby reducing the amount of time it takes for the water to evaporate and the potash to crystallise. 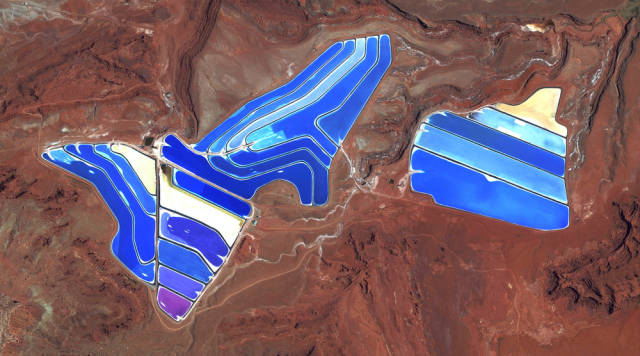 Every year, tulip fields in Lisse, Netherlands begin to bloom in March and are in peak bloom by late April. The Dutch produce a total of 4.3bn tulip bulbs each year, of which 53% (2·3bn) are grown into cut flowers. Of these, 1.3bn are sold in the Netherlands as cut flowers and the remainder is exported: 630m bulbs to Europe and 370m elsewhere. 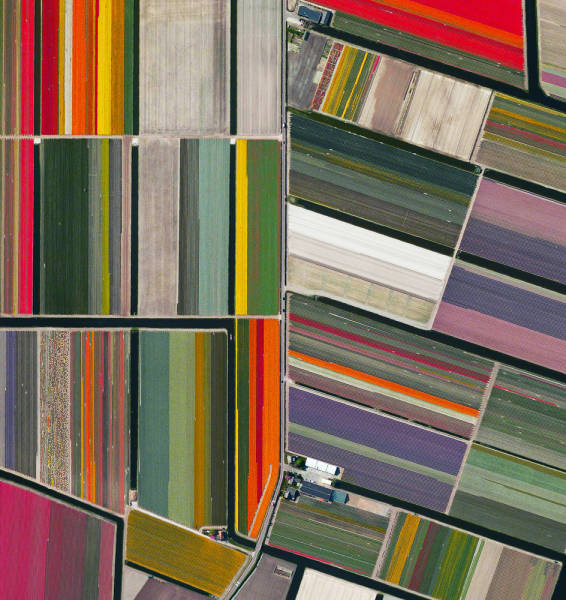