2000’s ”American Psycho” didn’t do all that great at the box office when it was released,but it has become a cult classic over the years. The movie follows the life of Patrick Bateman, played by Christian Bale, a high class yuppie who loves to manipulate and kill people. Here are some interesting tidbits about this incredible flick. 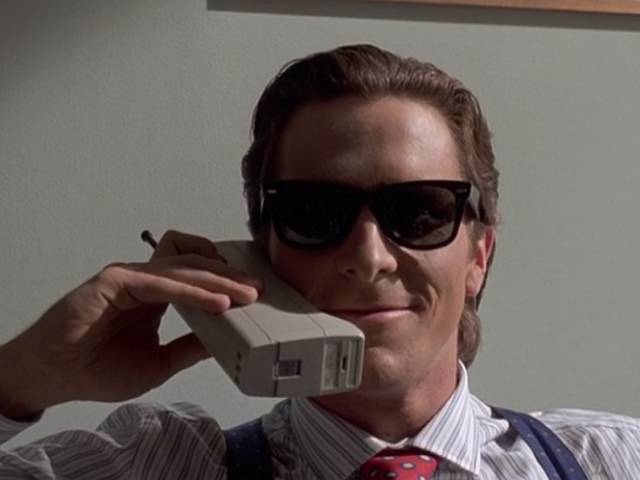 The movie is based off of a book with the same title. The book itself is a hell of a lot more graphic.

Christian Bale based his performance of Patrick Bateman off of a 1993 Interview that Tom Cruise did on The Late Show with David Letterman. Bale said that he saw “this very intense friendliness with nothing behind the eyes.”

The biggest cost in the film was purchasing the rights to certain songs used throughout it.

Plenty of people warned Christian Bale that taking the lead role in this movie would be career suicide.

Christian Bale is a known method actor, and had kept his American persona up even when they weren’t shooting. When he started speaking in his native British accent during the wrap party, people thought that he was preparing for a different role, not knowing that he was actually British.

During the entire filming process, Christian did the exact morning routine that Patrick does in the beginning of the movie.

Brett Easton Ellis, the author of the original book, received death threats after the book was published.

The instances that Patrick is describing to his lawyer on the phone are ones that happen in the book, not the movie.

That “woosh” sound that you hear during the business card scene is a slowed down audio clip of a sword being drawn from it’s sheath.

In the scene where Paul Allen mistakes Patrick for Marcus Halberstam, all three of them are wearing the same pair of glasses.

The last name “Bateman” was inspired by the name “Norman Bates” from “Psycho.”

When Bateman says that he has to leave a conversation to join a lunch meeting, he says that the meeting is with “Cliff Huxtable.” Cliff Huxtable wass Bill Cosby’s character in “The Cosby Show.”

While the book is set in 1989, the film is set in 1987. This is evidenced by the televised Ronald Reagan speech near the end of the film.

Christian spent several hours a day in the gym and had a personal trainer on set with him at all times to maintain his physique.

Reese Witherspoon’s character cries after being dumped in a restaurant. Funny enough, in her next movie “Legally Blonde” her character does the exact same thing.

Christian improvised his little dance that he does when he starts playing “Hip to be square.” Director Mary Harron said that she “collapsed in laughter” when he caught her off guard with the moves.

The film also stars Jared Leto. Christian Bale and Jared Leto would both go on to play Batman characters.

This is the first of a run of films in which Christian Bale went through drastic body transformations.

Huey Lewis himself rejected the idea of having their songs on the soundtrack album due to the content of the movie.

Despite the fact that Patrick is clearly rich, you never see him doing any work during the whole movie- even when he’s at work.

Nearly all of the dialogue in the film was taken directly from the novel.

The movie that is playing on Patrick’s T.V. while he’s working out is “The Texas Chainsaw Massacre.”

In preparation for the sex scene, Bale drew stick figure sex positions that he thought would work best and showed them to director Mary Harron.

In the ending scene, there is a sign in the background that reads “This is not an exit.” Those words are also the last words in the novel.