Meteor is a luxury yacht built by RoyalHuisman in 2007. This idyllic charter yacht vaunts of amenitiessuch as not just one but two deckhouses. It can accommodate up to a total of 18 people (6 guests and 12 crew) with its 2 twin cabins and a master suite. 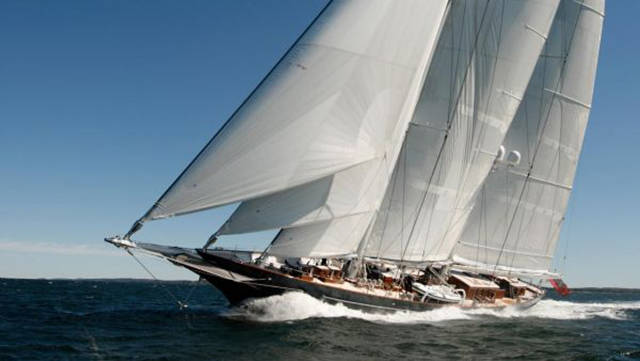 This custom-made megayacht was constructed in 2000 and was previously owned by Russian billionaire Roman Abramovich. Then it was reportedly given as a gift to his billionaire friend and business partner Eugene Shvidler. 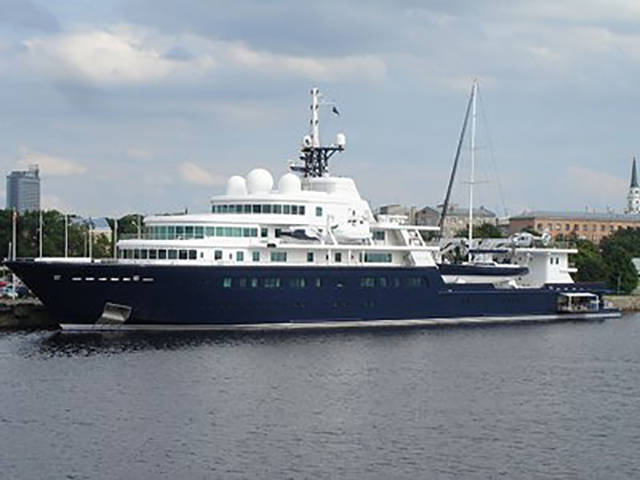 Annaliese is a custom-designed superyacht that can accommodate up to 36 people excluding the crew. This massive vessel houses an indoor gym with amenities such as a sauna and Jacuzzi. Guests can gain access to a master and VIP suite with king-sized beds as well as a total of 16 twin bedded suites. 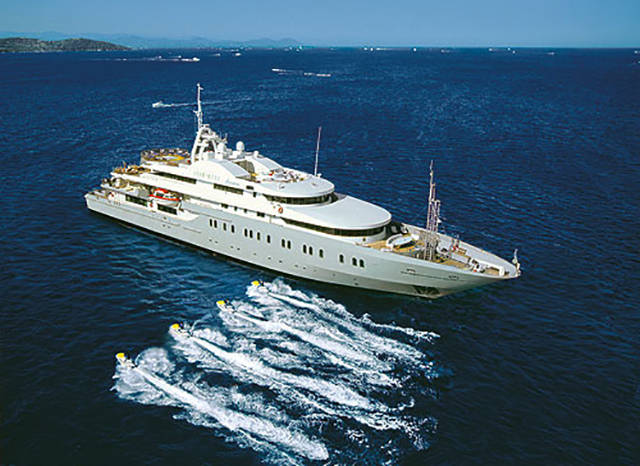 Pelorus is deemed to be one of the iconic superyachts with its massive interior that can host 22 guests and 42 crew members luxuriously.

Alysia, now known as Moonlight II,is the sister ship of Annaliese. Be it indoor or outdoor activities, Alysia offers leisure and entertainment from its sun deck with a bar and Jacuzzi to its lower deck with a full-blown relaxation area. 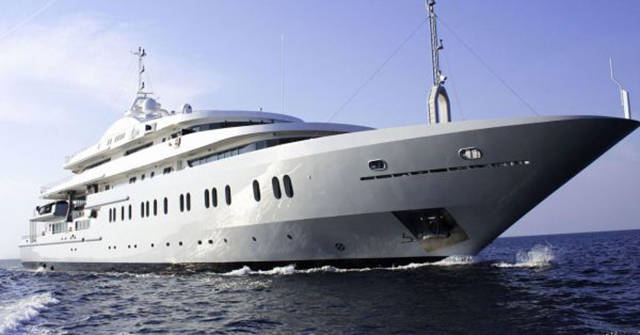 Ambrosia is known to be one of Asia’s most desirable yachts. It is also one of the first mega yachts to adapt the DEP or diesel-electric propulsion system that actually minimizes noise and vibration when the vessel is in transit. 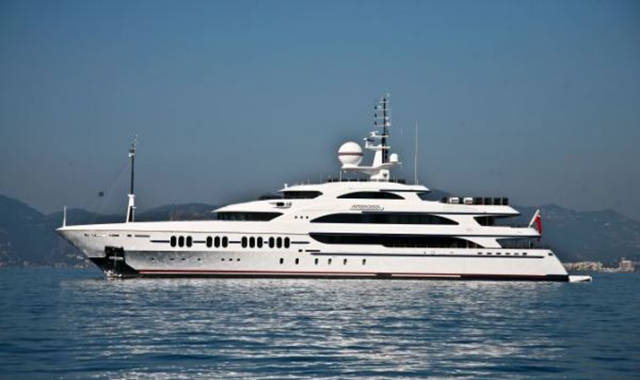 The Maltese Falcon takesseafaring of a sail-driven yacht to the next level. It is complete with amenities such as VIP suites and a techno gym. It’s perfect for cruising through the Atlantic as its 15 sails held by three rotating masts take you to incredible speeds under healthy winds. 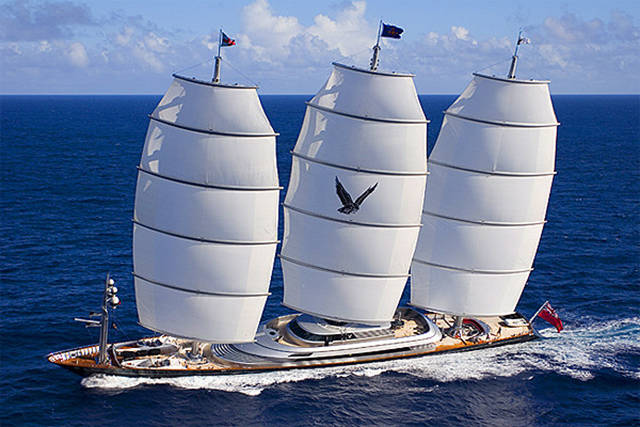 This mega-sized yacht, ranked as the 26th largest yacht in the world, is owned by Paul Allen, Microsoft’s co-owner. This 303-foot long yacht houses entertainment that ranges from a 6-ft swimming pool to a movie theater. 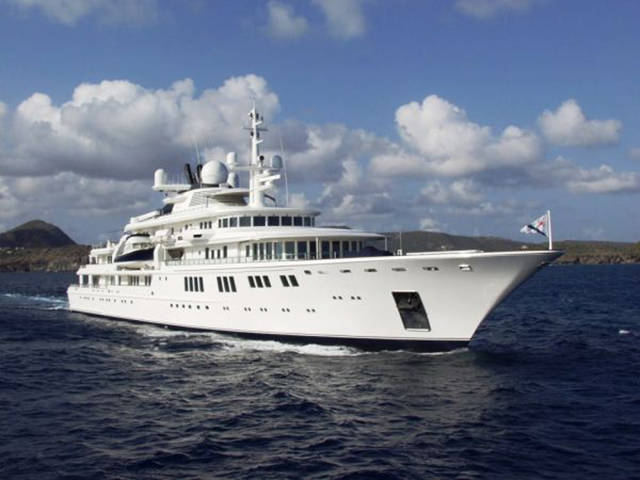 Eos is considered to be one of the biggest sailing yachts in the world. Her interior which has been kept secret is reported to have a glass staircase. 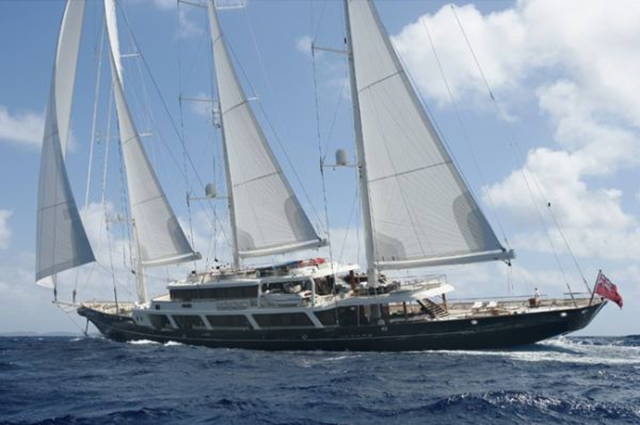 This 265-foot long yacht boasts of a modern and sleek design complete with features and amenities such as a living garden, office, sauna and gym. 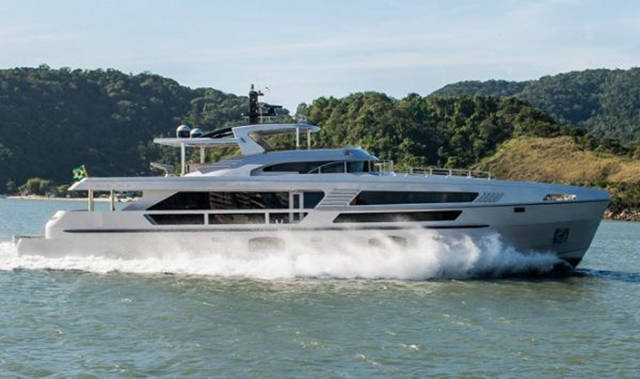 The Octopus is another megayacht owned by billionaire Paul Allen that costs $200M to build according to businessinsider.com. Its classiest features are its two helipads and 2 submarines. 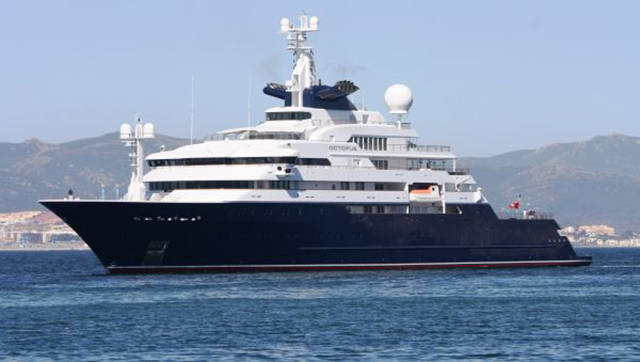 Ecstasea is considered to be one of the biggest and best equipped superyachts by Feadship with anchor stabilizers that assure comfort even in rough waters. 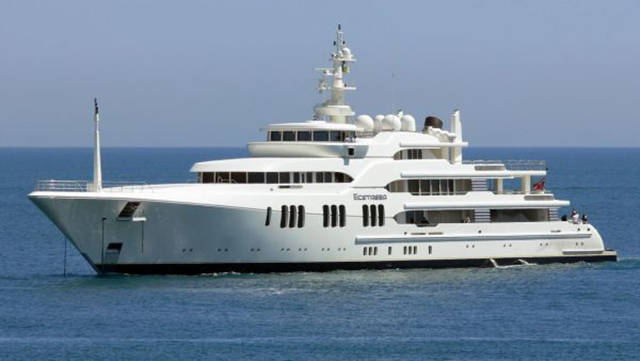 This massive motor yacht, often mistaken as a cruise ship, is owned by Saudi Arabia’s Defense Minister, Sultan bin Abdul Aziz. It earned the nickname MIPOS or Mission Possible during its construction because the sultan wanted it built in just a span of two years. 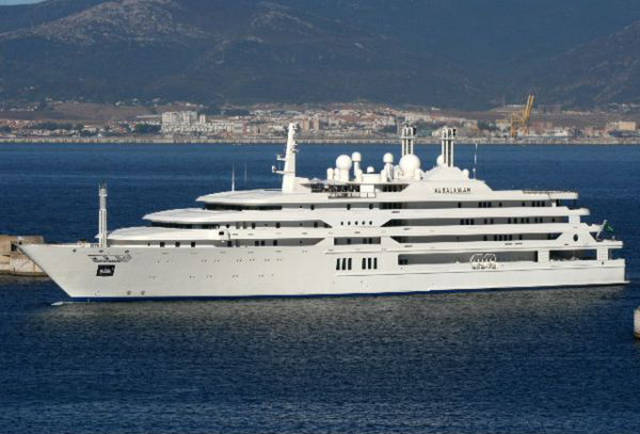 Ranked as one of the largest private yachts in the world, the Rising Sun has a total of 82 rooms spread across five floors. Not only does it have a movie theater and a wine cellar, but it also has its very own basketball court.

The Seven Seas, owned by Steven Spielberg, has on-board luxuries such as a glass movie screen and an infinity pool. 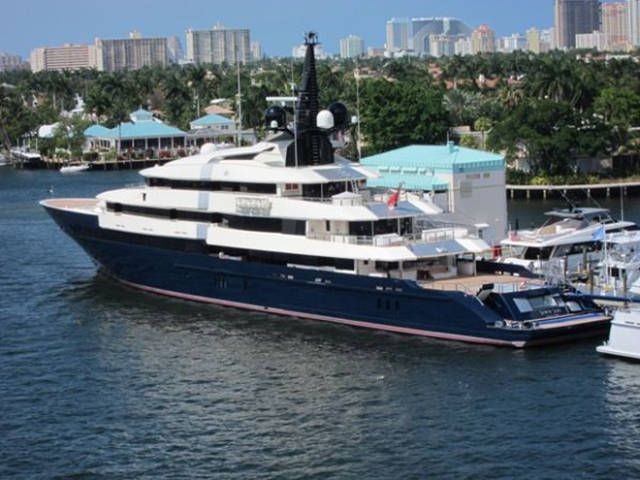 The Ice yacht is one of the first environment-friendly superyachts whose goal is to reduce emission to the lowest feasible levels.

If bowling alleys, basketball courts, and a full-blown rest and relaxation sections aren’t luxurious enough for you, then you might want to take a look into Lady Moura’s on-board beach complete with an adjustable hydraulic platform covered with sand. 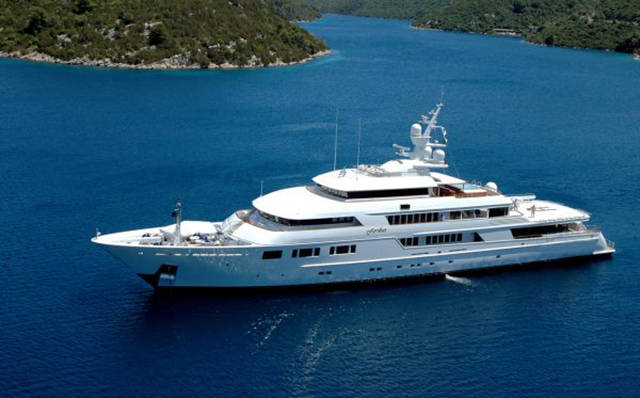 This quarter of a billion dollars megayacht has won quite a number of awards such as Best Interior Design and the 2009 Motor Yacht of the Year Award from The World Superyacht Awards. 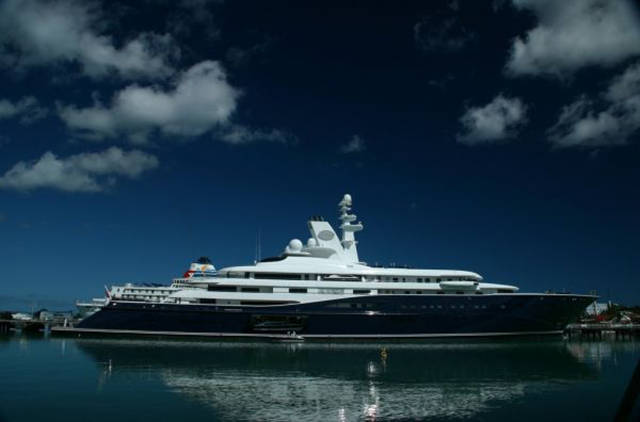 Launched in 2008, Dilbar is owned by Russian magnate Alisher Usmanov. This luxury super yacht can accommodate up to 20 guests and 47 staff members. 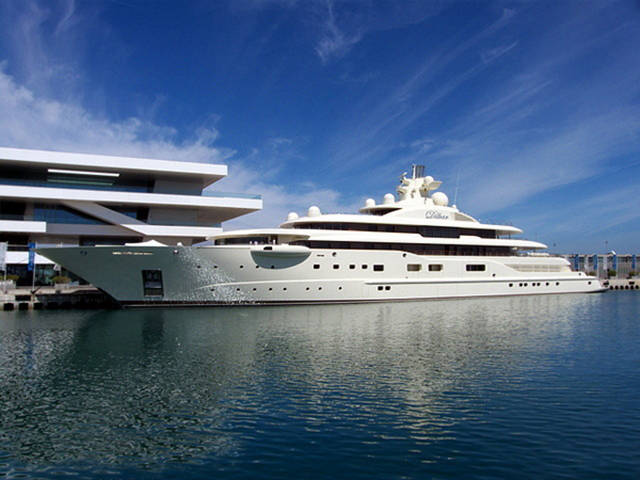 Radiant is owned by car dealer and investor Abdulla Al Futtaim. It is complete with a swimming platform, beach club, and movie theater. It is reported to be equipped with sonic guns and water cannons. 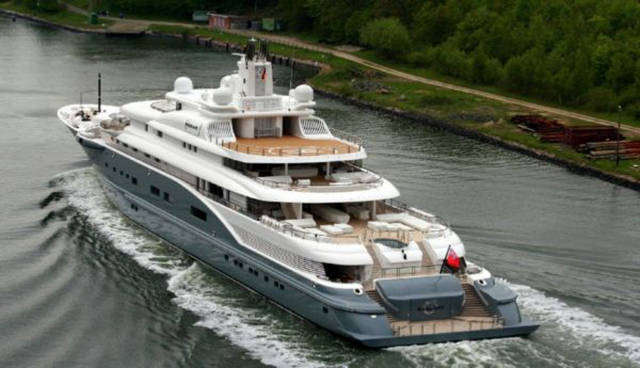 To cap off its grand interior, this superyacht has its own concert hall that can accommodate a 50-piece orchestra. 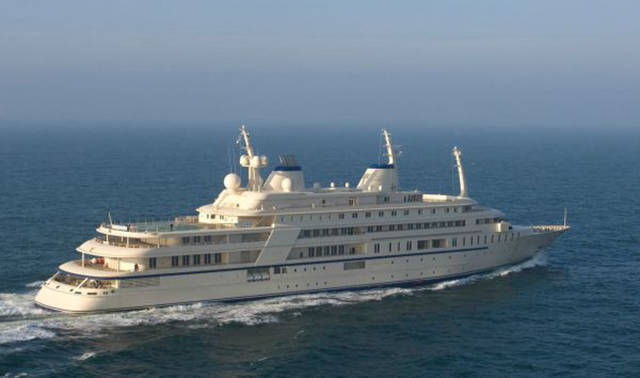 This sleek, modern superyacht offers a wide variety of luxurious amenities such as a mosaic swimming pool plus a spiral glass staircase that even changes color. 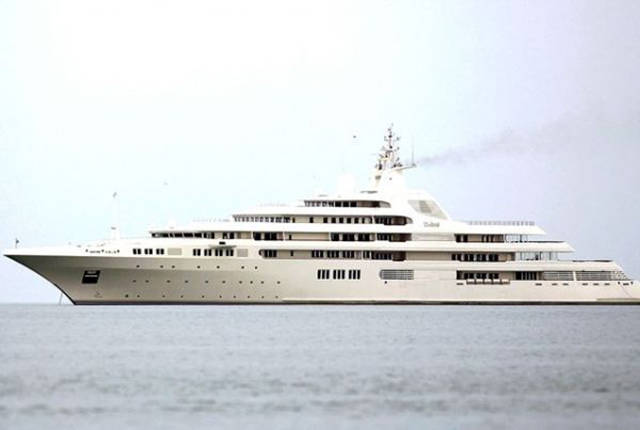 Named after her owner’s initial, the “A” owned by Andrey Melnichenko can cut through icebergs. 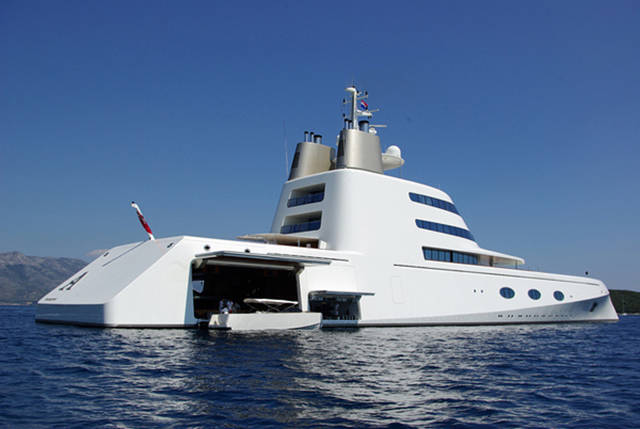 Azzam’s engineering and design is one of the most impressive and innovative in the world as it sought to cruise at high speeds even in shallow waters. 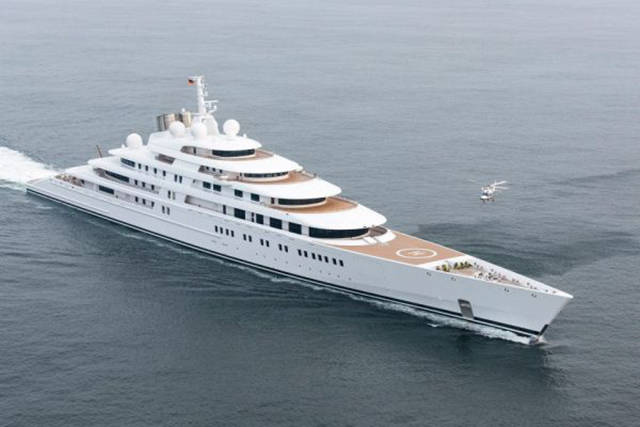 The Eclipse was custom built by Bohm Voss Shipyards, particularly for billionaire Roman Abramovich. One of the striking features of this massive superyacht is its very own missile defense system. 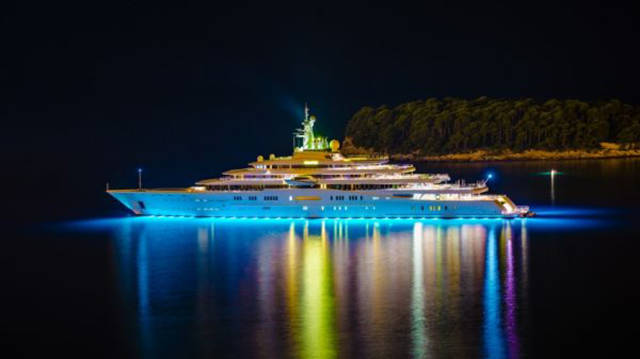