LinkedIn has more than 450 million members in over 200 countries around the world. It is employment-oriented social networking service mainly used for professional networking. The company has a market capitalization of $23 billion and has 9,200 people that work there. LinkedIn set up hundreds of their offices worldwide, but we’ll have a look at what it is like to work at their Manhattan office situated in the Empire State Building.

When we arrived at the office on a rainy Friday morning in October, we took one of the building's famous Art Deco elevators up to the 25th floor. Though LinkedIn is headquartered in Sunnyvale, California, the company has 30 offices around the world. In total, 700 employees work in their Empire State Building location. 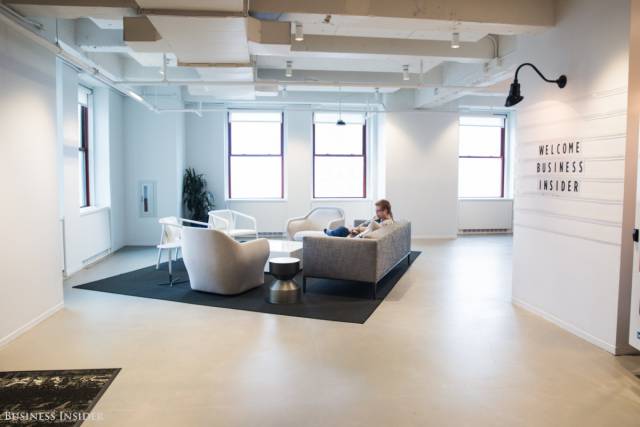 We waited for our tour guides in LinkedIn's colorful reception area, which has books and a coffee station for employees and visitors. 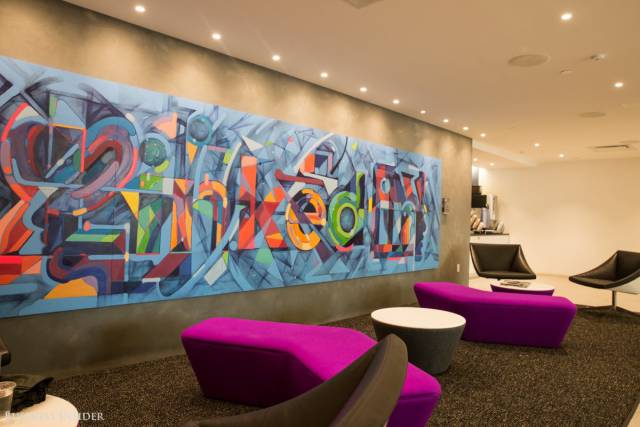 The company first moved into the Empire State Building in 2011. They've since taken over five floors of the building. 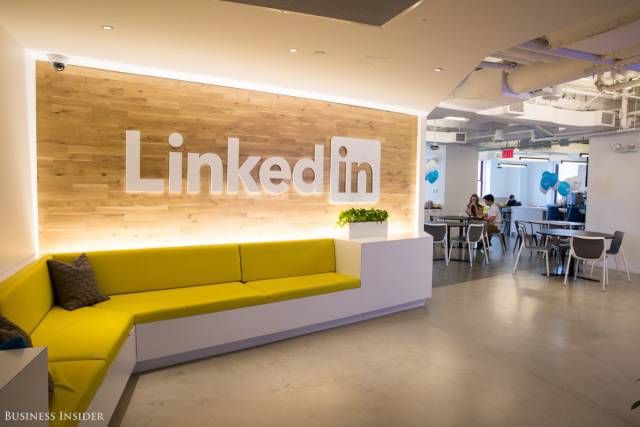 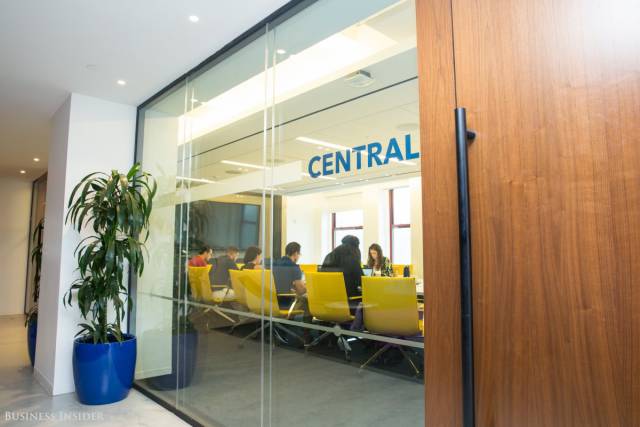 One of our first stops was the office movie theater, where employees can watch films or battle it out in FIFA competitions. 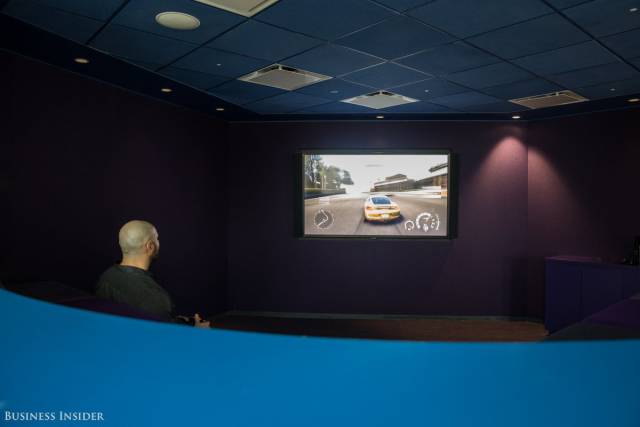 Walking out of the theater, we passed by a high-tech vending machine. Employees can access all sorts of work-related gadgets — like keyboards and chargers — with their LinkedIn employee badge. 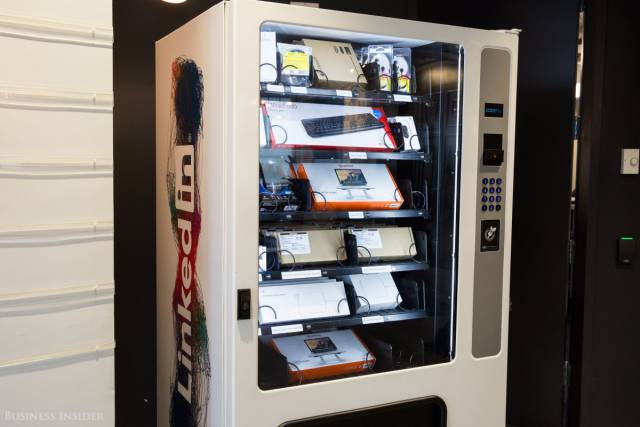 Next we headed to the kitchen. LinkedIn employees enjoy free, catered breakfasts and lunches every day. The company also offers spontaneous treats, like pop-up poke bars and cookie decorating stations. 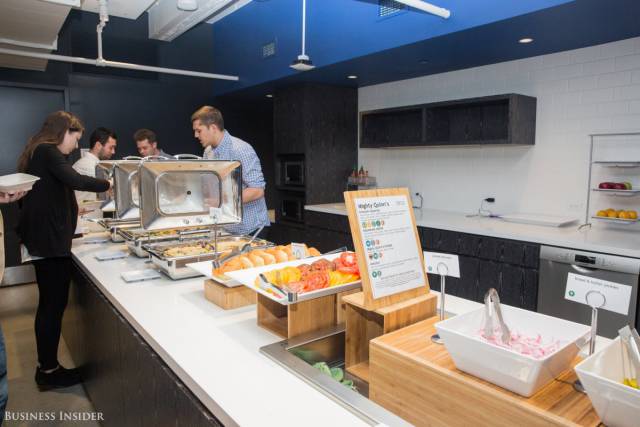 We visited LinkedIn on a what they call an "InDay" — a monthly event that offers LinkedIn employees the chance to participate in different activities and team-building exercises. Here, a group of workers are enjoying an intense game of "Lost Cities." 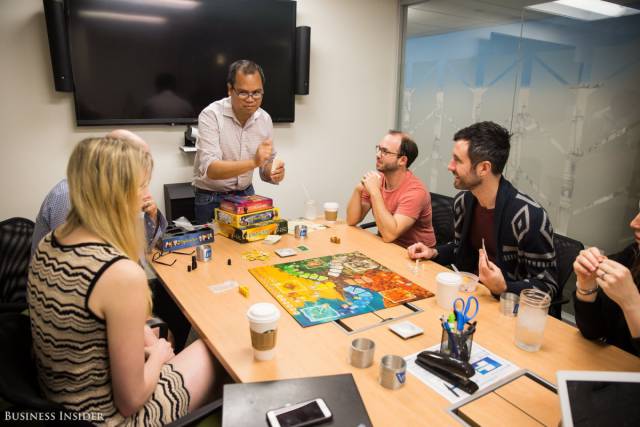 "Our InDays really allow employees to pause, step away from their desks, and engage with LinkedIn life," Fakhoury says. 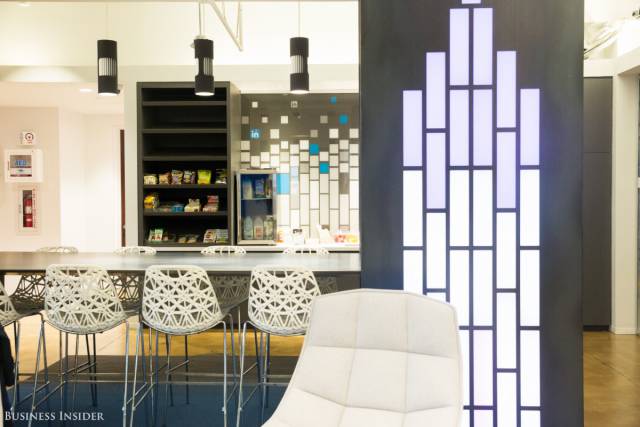 For the event, LinkedIn brought in a Tilt Brush headset, which allows users to paint in 3D space. 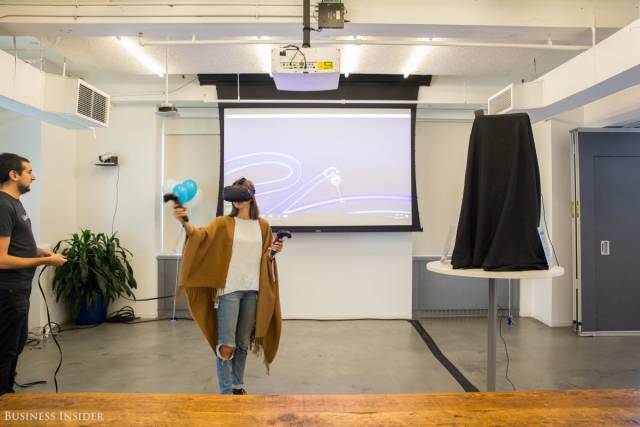 Throughout the tour, we encountered some other cool perks — like a pool table, foosball tables, and a karaoke machine. Apparently, karaoke battles between LinkedIn offices — fought out over video chats — can get pretty competitive. "What we really want to do is get people together from different departments and different teams to form relationships," Campofelice says. "We're really creating a more collaborative environment." 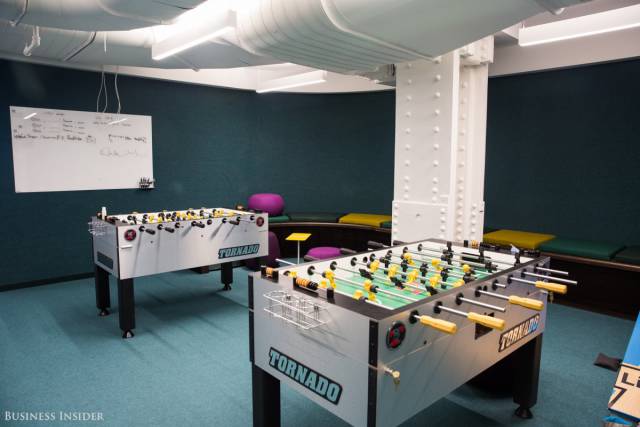 Next, we visited the 28th floor. The elevator doors opened to a bright blue, almost futuristic central lobby. It was one of the most striking locations of all. "We wanted people to feel like they're arriving at a destination," Campofelice says. 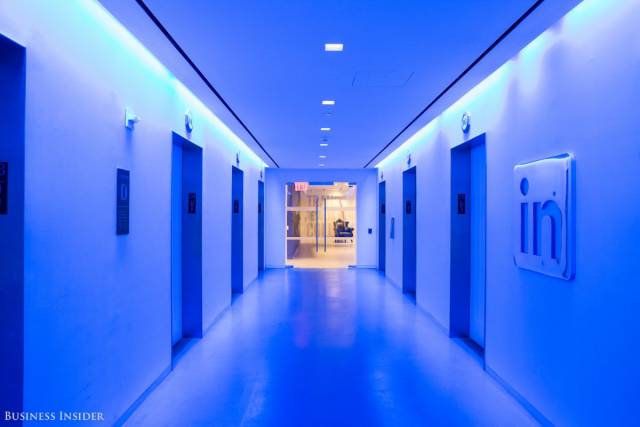 After passing through the blue hall, we entered a reception area with a wall displaying LinkedIn's principles. "From the moment you step into this space, our values are on the wall," Campofelice told Business Insider. 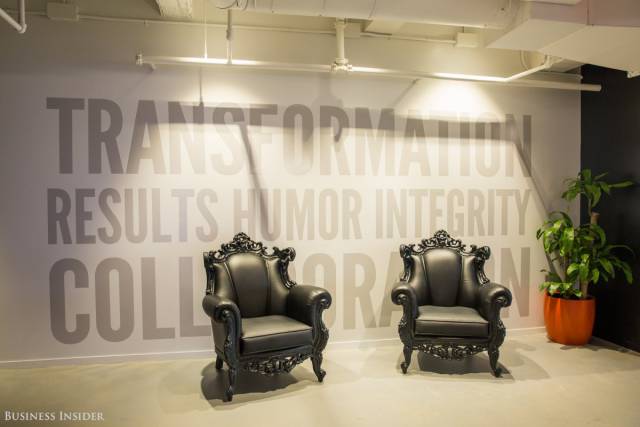 When it comes to conference room names, each floor has a different theme, including New York City street names and former SNL cast members. 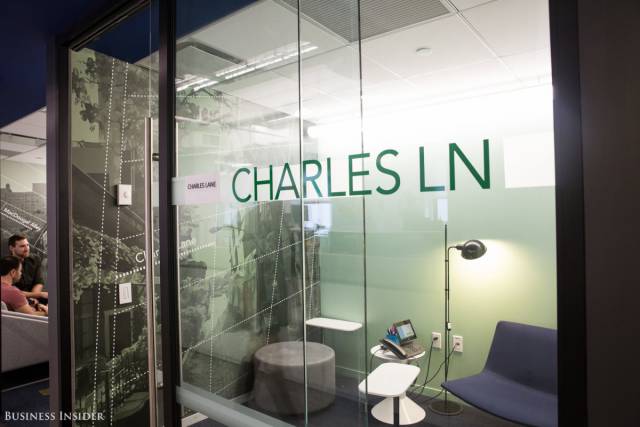 The main office space features an open layout. LinkedIn's workspace is malleable, featuring panels that employees can slide and adjust. 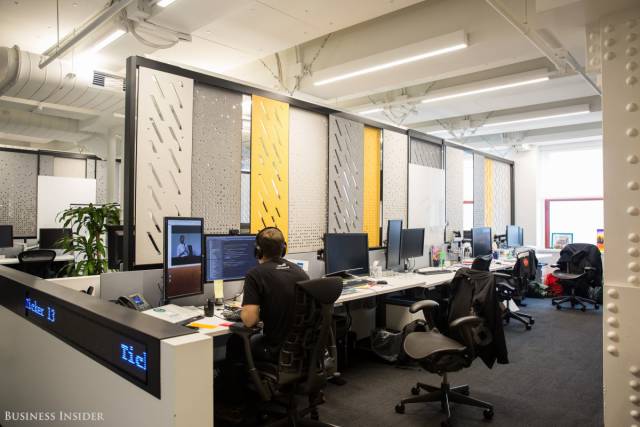 Employees frequently move around between their desks and favorite spots around the office ... 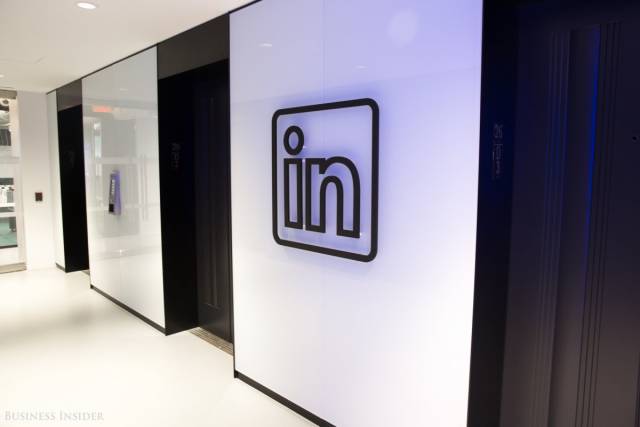 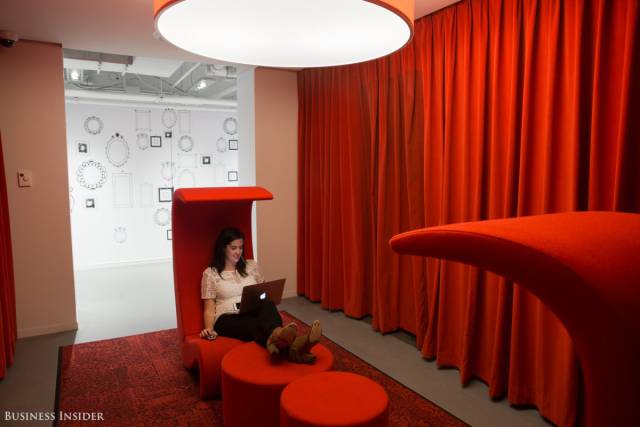 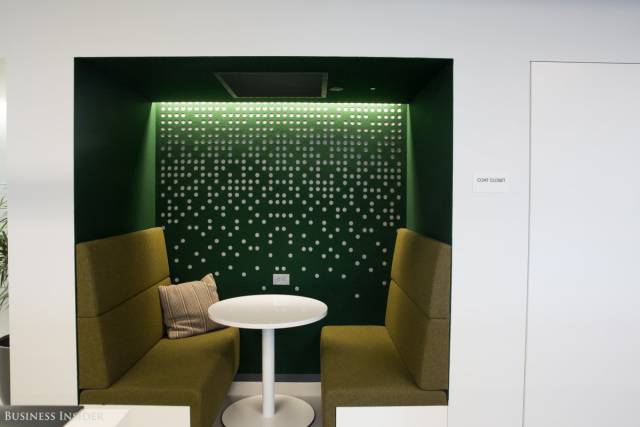 This lounge area is one particular hot spot. We were surprised to find a fireplace here. It burns gas, so there's no smoke to worry about. 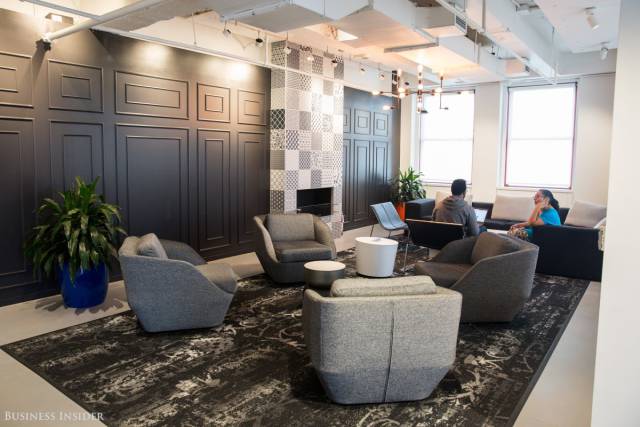 If you really want a quiet space, you can come to the office's library. The shelves are filled with books that employees brought from home. 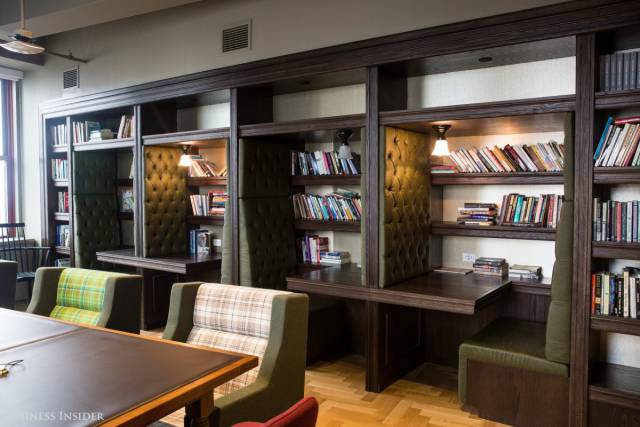 As we left the library, we came across this colorful mural — one of many we encountered throughout our tour. 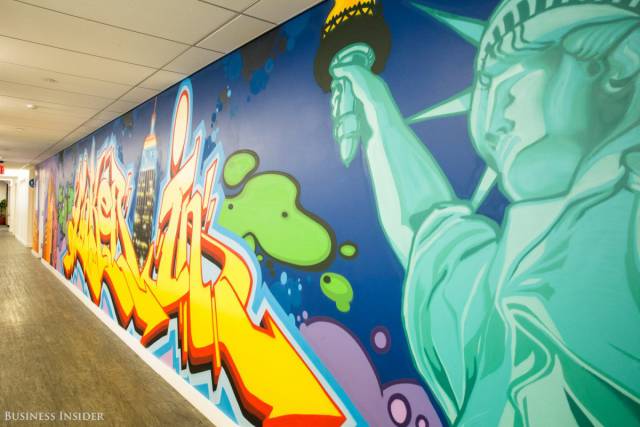 Other fun art we spotted: the wall of pets. Employees aren't permitted to bring animals to work due to the building's policy. As a result, the workplace team at LinkedIn's Manhattan office established a pet wall, featuring photos of workers' furry friends. 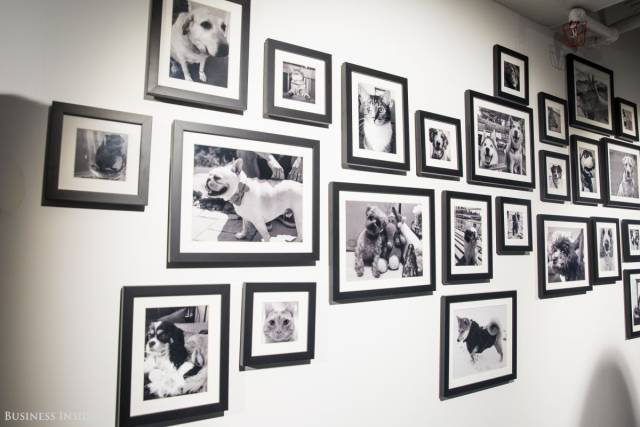 We also visited a "flashback" wall. Keeping with LinkedIn's focus on careers, employees submitted their baby photos, along with blurbs about what they wanted to be when they grew up. 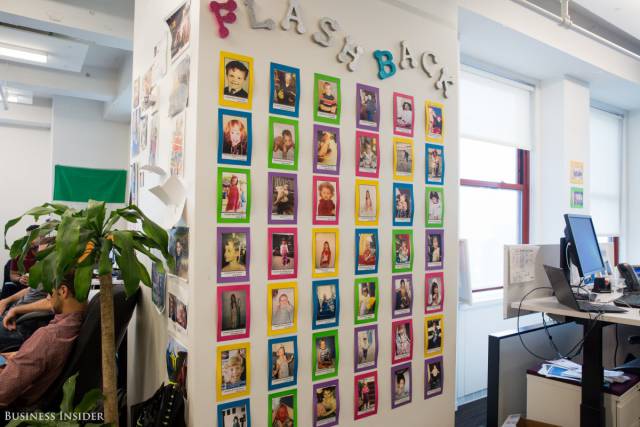 One of the most intriguing spots in the office was this mysterious wall, which is decorated with 133 rotary phones. Picking up and hanging up the right phone will give you access to the room behind the wall — but only LinkedIn employees know which one. 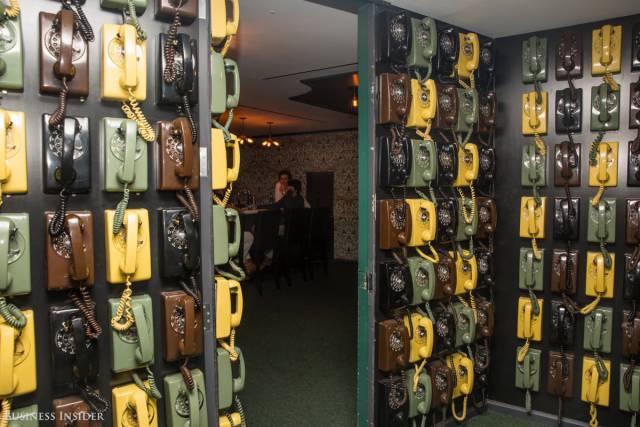 Inside, there's a speakeasy. It's a popular spot for get togethers like baby showers and surprise birthday parties. Here, LinkedIn also hosts "Beers for My Peers" every Thursday night. The program encourages everyone the office to swing by the speakeasy, where new hires act as bartenders. "What we'll do to really officially bring them into LinkedIn's culture — and, of course, give them 200 new friends in under 60 minutes — is we'll actually have them be the ones serving the beer and wine. That way they can meet new people, build new relationships, and get introduced to LinkedIn's awesome culture," Fakhoury told Business Insider. 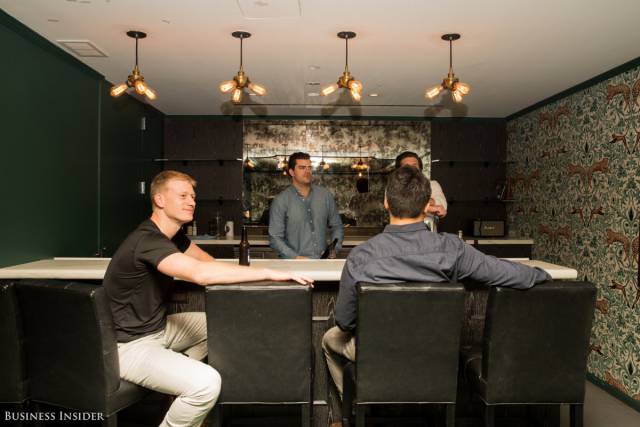 One interesting design feature: the office has a ribbon of blue millwork that runs throughout the 28th floor, connecting various amenity zones. According to our tour guide, this reflects the office's focus on connectivity. 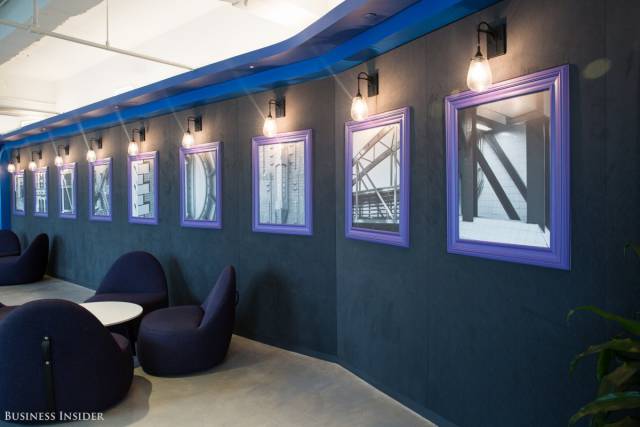 One of our very last stops was the gym. Employees don't have to leave the building to exercise. The office gym offers boot camp, barre, yoga, and group fitness classes. According to Kniffin, the perks are all about rewarding hard work and providing employees with a comfortable environment. 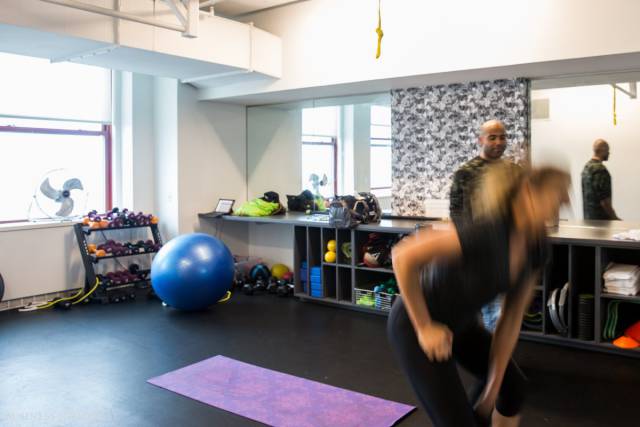 We concluded our tour back on the 25th floor, where we recapped what we saw with the tour guides. "We really believe that a workplace is the physical embodiment of a culture," Campofelice told Business Insider. 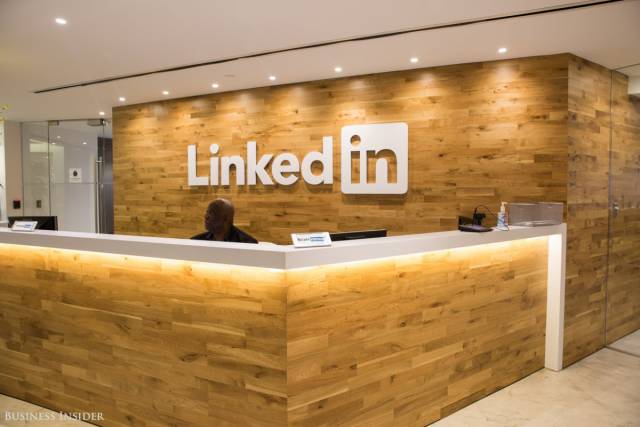