James N. Mattis is a retired United States Marine Corps general. As of November 2016, General Mattis is being considered for the position of Secretary of Defense in the new administration of President-elect Donald Trump. According to Business Insider, he is “something of a legendary figure in the US military. Viewed as a warrior among Marines and respected by members of other services, he has been at the forefront of numerous engagements.” Here are some of his unforgettable quotes:

"You cannot allow any of your people to avoid the brutal facts. If they start living in a dream world, it's going to be bad." 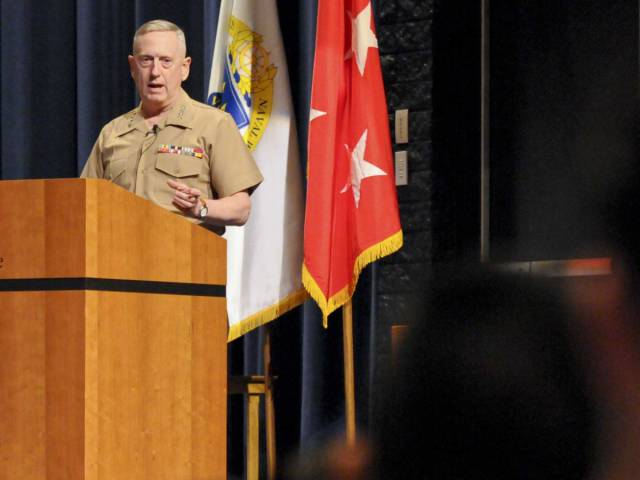 Mattis has often talked to Marine leaders about staying sharp.

The "dream world" he mentioned is a reference to a complacent attitude, and it's one that can cost lives if troops aren't vigilant.

"If in order to kill the enemy you have to kill an innocent, don't take the shot. Don't create more enemies than you take out by some immoral act." 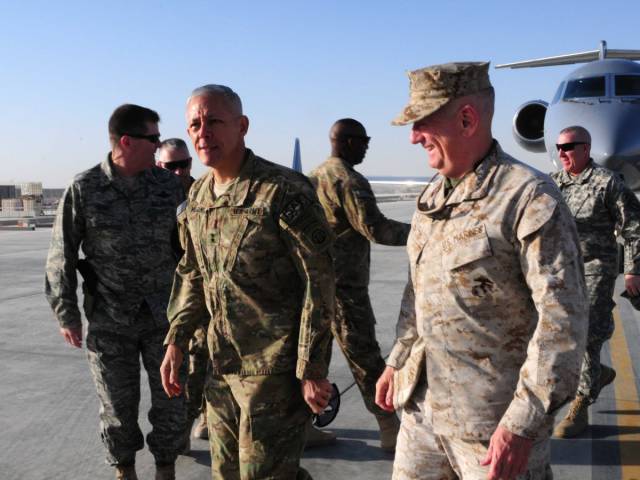 As a coauthor of the military's counterinsurgency manual (with retired Army Gen. David Petraeus), Mattis has often spoken about following the rules of engagement and being disciplined against a ruthless enemy.

"I come in peace. I didn't bring artillery. But I'm pleading with you, with tears in my eyes: If you f--- with me, I'll kill you all." 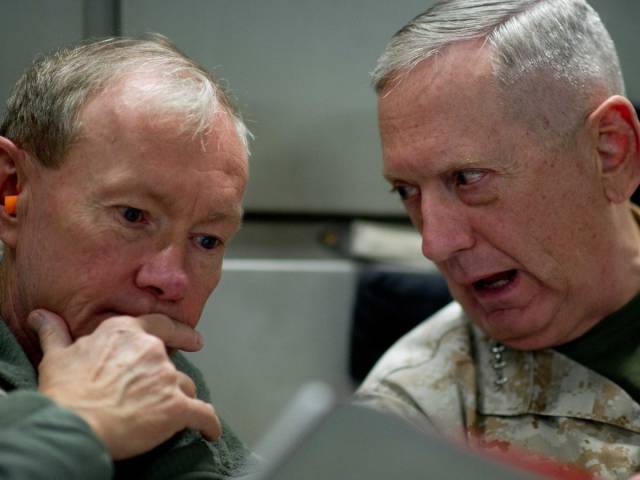 After the initial Iraq invasion, "Chaos" (his radio call sign) sent home his tanks and artillery and used the "carrot and the stick" with Iraqi tribal leaders.

"The first time you blow someone away is not an insignificant event. That said, there are some a--holes in the world that just need to be shot. There are hunters and there are victims. By your discipline, you will decide if you are a hunter or a victim." 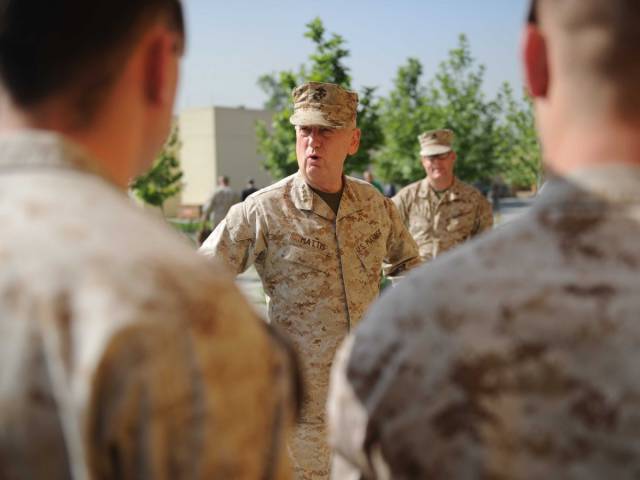 Addressing his Marines at an air base in Iraq, he tried to motivate them to stay sharp and continue the mission.

He ended the speech, telling them in Patton-esque fashion, "I feel sorry for every son of a bitch that doesn't get to serve with you."

"Be polite, be professional, but have a plan to kill everybody you meet." 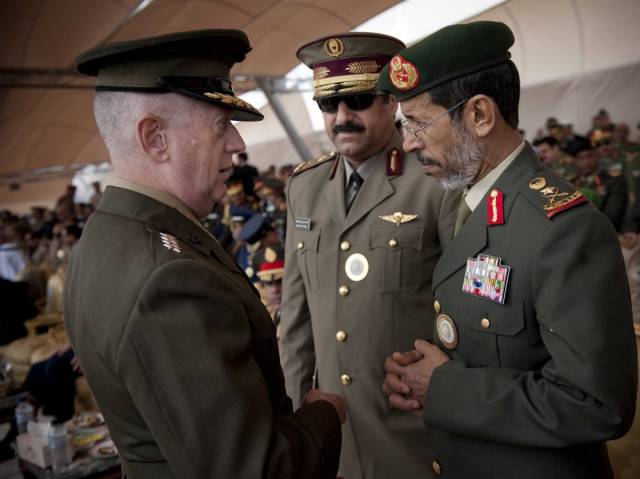 One of his "words to live by" for his Marines in Iraq, which was a call for his troops to remain vigilant and never let their guard down even in the company of those who seem friendly.

In a country where insurgents would blend into the local populace with ease, it was good advice.

"We've backed off in good faith to try and give you a chance to straighten this problem out. But I am going to beg with you for a minute. I'm going to plead with you, do not cross us. Because if you do, the survivors will write about what we do here for 10,000 years." 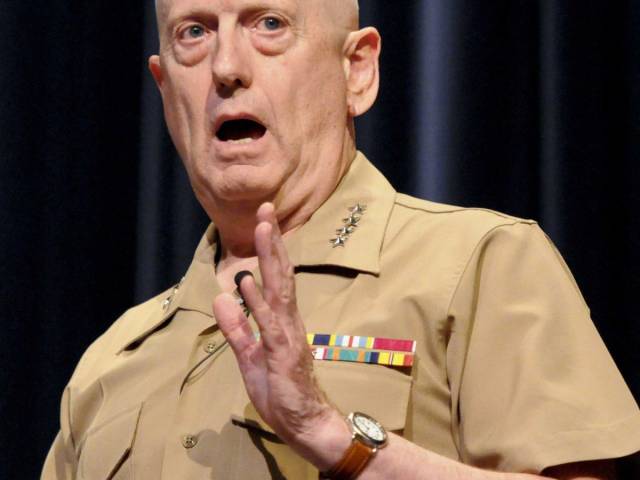 Mattis demonstrates that he is willing to extend an olive branch to those on the fence — while carrying the weight of Marine firepower if that doesn't work out.

This quote is often shared among Mattis fans for its almost Spartan-like delivery.

"I don't lose any sleep at night over the potential for failure. I cannot even spell the word." 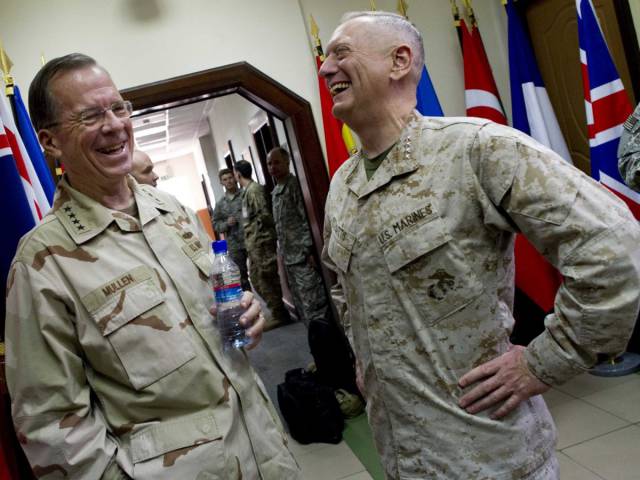 The general has always been confident in his abilities and that of his Marines.

He led the 1st Marine Expeditionary Brigade into Afghanistan in 2001 and the 1st Marine Division into Iraq in 2003, and he led an operation into Fallujah in 2004 dubbed "Operation Vigilant Resolve." He also helped to plan the later "Operation Phantom Fury."

His success in battle and strategic genius has earned him an almost godlike status among Marines.

"A country that armed Stalin to defeat Hitler can certainly work alongside enemies of Al Qaeda to defeat Al Qaeda." 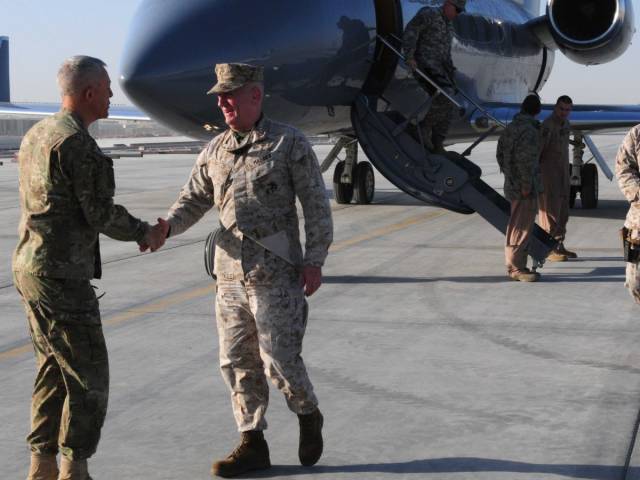 The general is a student of history and an avid reader.

He often stresses the importance of education and training on building effective future leaders.

"You go into Afghanistan, you got guys who slap women around for five years because they didn't wear a veil. You know, guys like that ain't got no manhood left anyway. So it's a hell of a lot of fun to shoot them. Actually it's quite fun to fight them, you know. It's a hell of a hoot. It's fun to shoot some people. I'll be right up there with you. I like brawling." 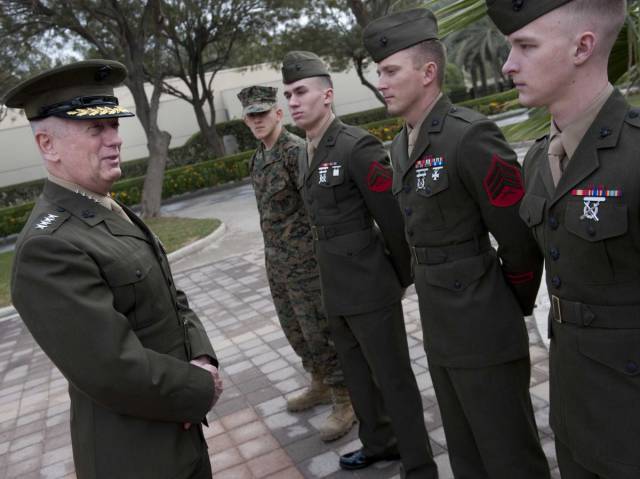 Some Mattis quotes don't come without a degree of controversy, including this one.

Mattis said this while speaking about his time on the ground in Afghanistan, but he was later counseled by his boss, Marine Commandant Gen. Michael Hagee, who said "he should have chosen his words more carefully."

"There are some people who think you have to hate them in order to shoot them. I don't think you do. It's just business." 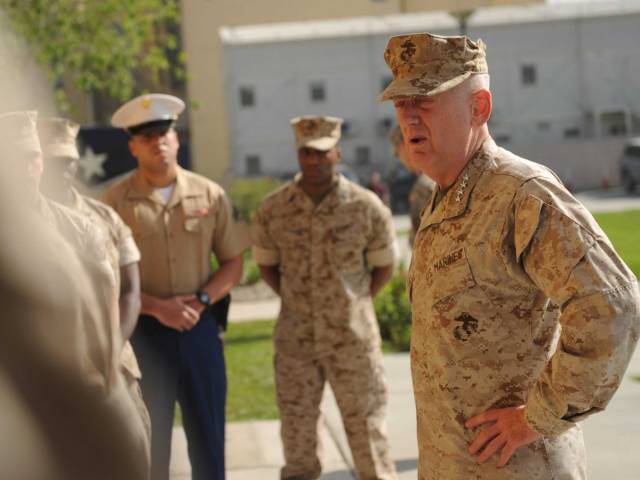 Many Marines still look up to Mattis as a cult-like figure. Nevertheless, he has always been seen as a consummate professional.

A Marine officer we spoke with told Business Insider: "The more I learned about him, the more I saw that the things we were doing right seemed to be associated with his philosophy of command."

"Marines don't know how to spell the word defeat." 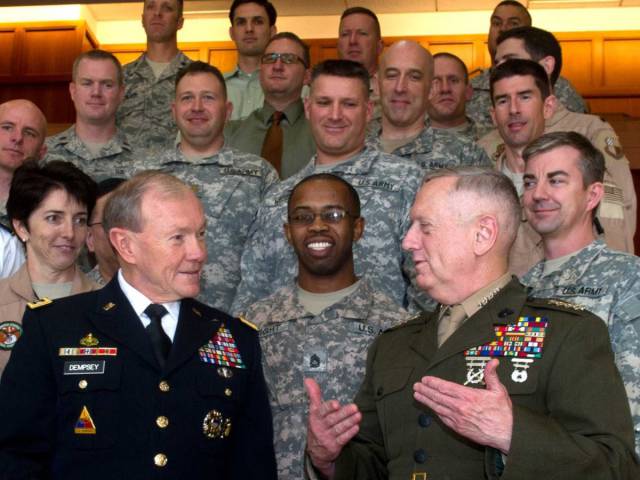 As a highly educated four-star general, Mattis probably can spell it, but he wants his Marines to know they should never let it happen.

"The most important 6 inches on the battlefield is between your ears." 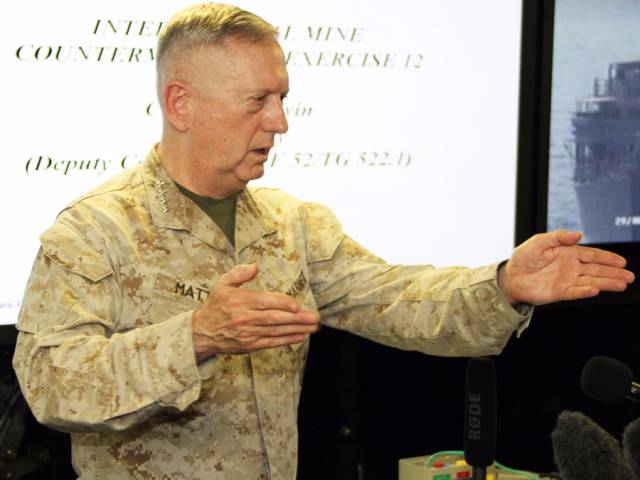 He often emphasizes to his troops that they need to be problem solvers, using firepower only as a last result.

While one of his nicknames is "Mad Dog," many other Marines know him as the "Warrior Monk" — a general who reads and studies constantly and has never been married. 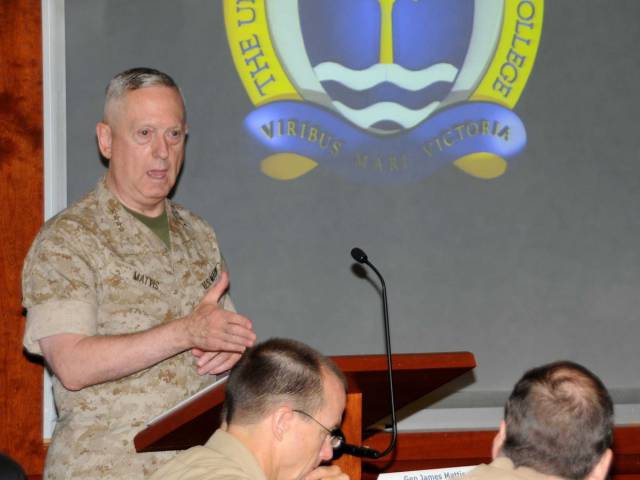 We can safely assume that Mattis, a top general, has had to sit through his share of awful PowerPoint briefings. Mattis actually banned briefers from using the software while he was in charge of US Central Command — a practice other top generals have followed.

"In this age, I don't care how tactically or operationally brilliant you are, if you cannot create harmony — even vicious harmony — on the battlefield based on trust across service lines, across coalition and national lines, and across civilian/military lines, you need to go home, because your leadership is obsolete. We have got to have officers who can create harmony across all those lines." 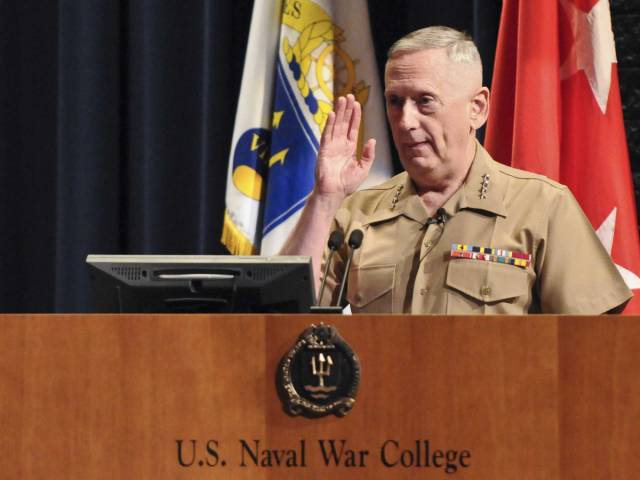 Mattis wants educated leaders who can both be book smart and be able to get the job done.

"Find the enemy that wants to end this experiment (in American democracy) and kill every one of them until they're so sick of the killing that they leave us and our freedoms intact." 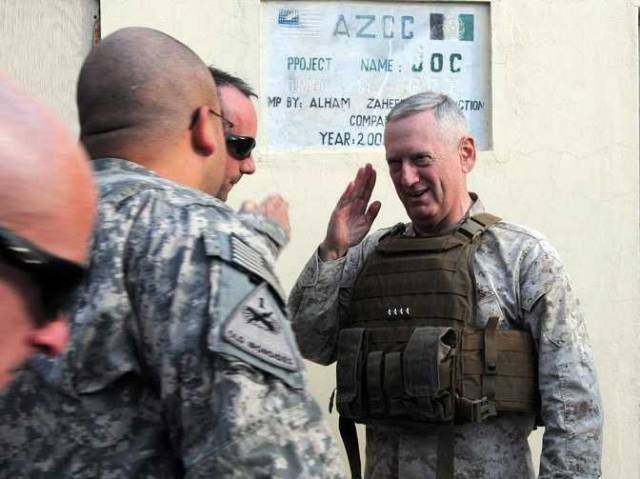 Mattis believes the battlefield is better off being far from American shores.

"Treachery has existed as long as there's been warfare, and there's always been a few people that you couldn't trust." 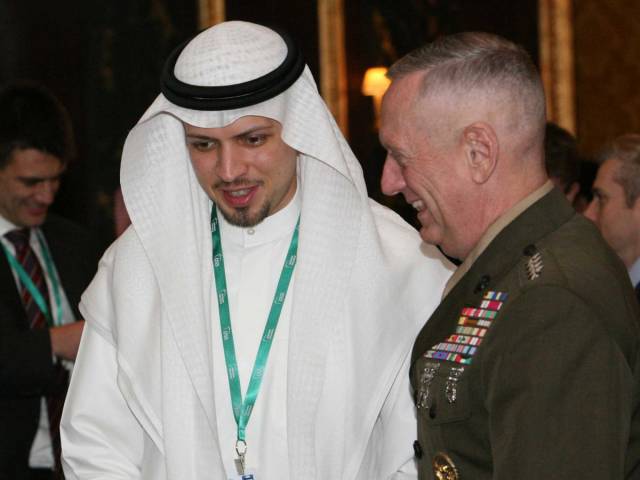 In places such as Iraq and Afghanistan, alliances can often shift quickly.

Mattis spoke with Congress on this point after a series of so-called green-on-blue attacks that left military leaders struggling to find a solution.

"Fight with a happy heart." 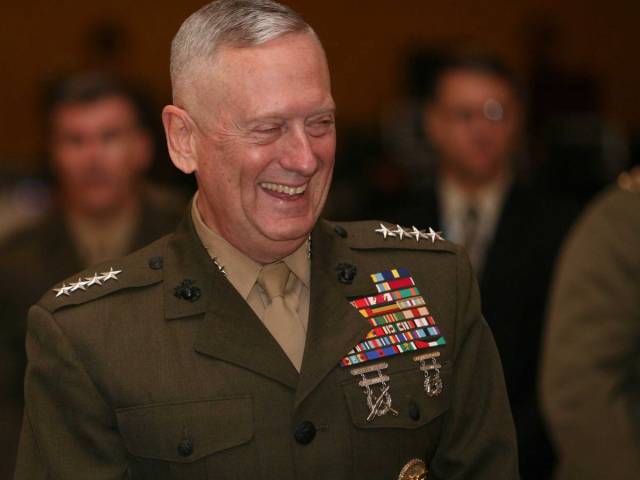 Before heading into Iraq in 2003, all Marines of the 1st Marine Division received a letter from General Mattis.

In the letter, he spoke candidly to his troops, telling them "we will move swiftly and aggressively against those who resist, we will treat others with decency, demonstrating chivalry and soldierly compassion for people who have endured a lifetime under Saddam's oppression."

"You are part of the world's most feared and trusted force. Engage your brain before you engage your weapon." 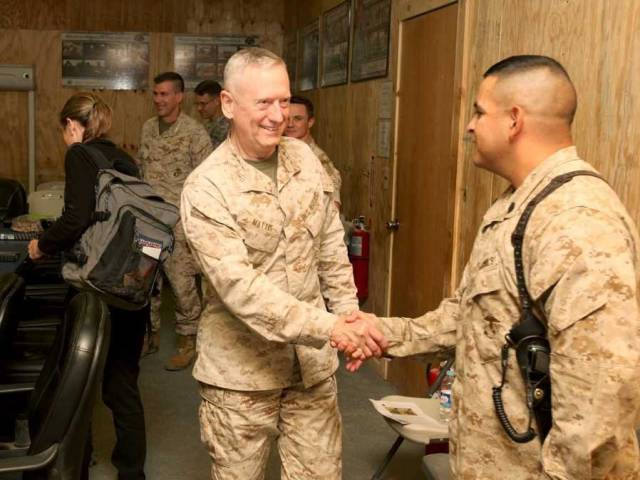 This line from his 2003 letter to his Marines foreshadows his contribution in 2006 to counterinsurgency doctrine, which stresses battlefield discipline and protection of the civilian populace.

"For the mission's sake, for our country's sake, and the sake of the men who carried the Division's colors in past battles — 'who fought for life and never lost their nerve' — carry out your mission and keep your honor clean. Demonstrate to the world there is 'No Better Friend — No Worse Enemy' than a US Marine." 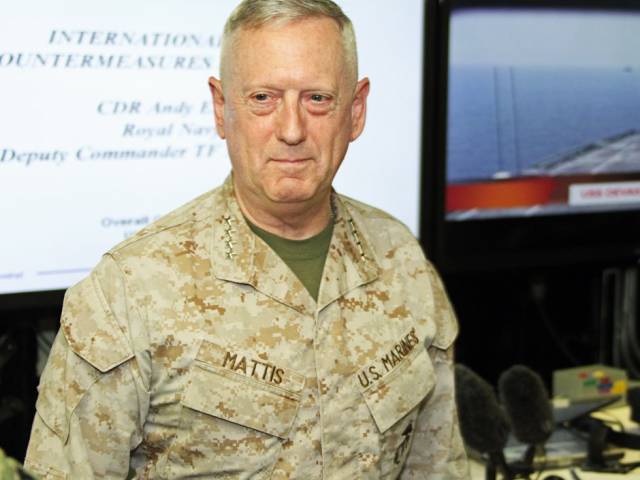 Mattis uses "never lost their nerve," a line from the "Marines' Hymn," in his 2003 letter to his men.

He goes on to offer another, telling them to "keep your honor clean." Mattis, an avid reader of history, wants his Marines to live up to the legacy of past warriors.