Colleen and Chris Otcasek from California were looking for a new house, and finally bought one in Woodland Hills. Their new home didn’t look any suspicious, up until they’ve found a large, concrete-lined hole in their back-yard, which turned out to be a bomb shelter. They were brave enough to venture and go down into the bunker, where they have found a shelter for a family of four, stocked with everything they would need for up to three weeks of staying. They found out that it was built by Alvin Kaufman – a self-taught nuclear engineer, who worked for the US Government in the 60’s. It explains why he knew every danger of the nuclear attack and prepared the shelter accordingly – with several sleeping areas, a water tank, a hand cranked air filter and enough food and other supplies. 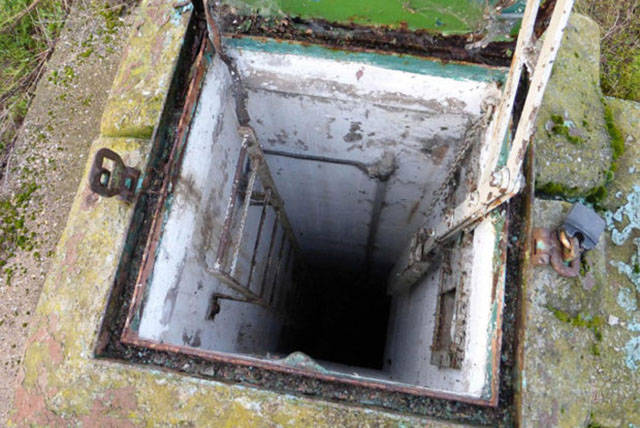 When they purchased the house, the Otcaseks were only told that the property had “an unusual feature”: a large, concrete-lined hole in the backyard. They were told that the hole once housed a fallout shelter from the Cold War Era. What they didn’t know, was what could be down there after all these years. 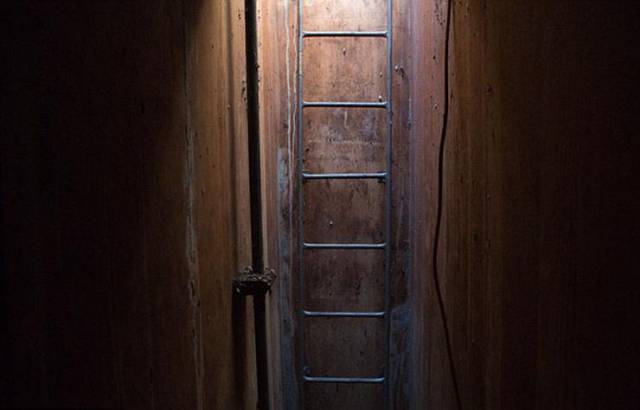 2. Ladder Into the Dark

The ladder into the shelter went down a perilous 15 feet into the earth. It was a bit rusted and looked as though it hadn’t been used for decades. As they descended the ladder and approached the thick, metal door, they wondered what they might find in the bunker. After all, it had been a long since the Cold War… 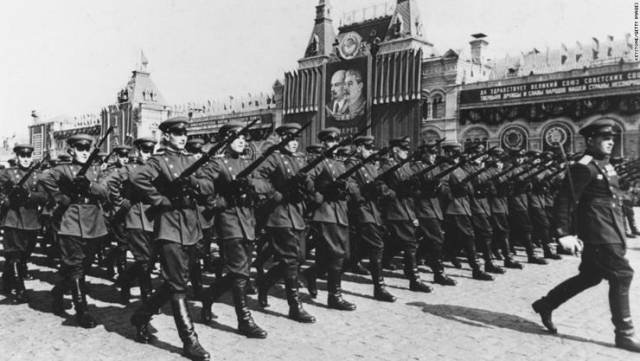 At the end of World War II, the Soviet Union and the United States were vying for control of Europe. Despite the remaining Allies’ best efforts, the Soviets were gaining power and developing their own nuclear weapons, much like the ones the U.S. had used to decimate Nagasaki and Hiroshima and win the war. The mere presence of these weapons of mass destruction started a war of posturing and propaganda that lasted throughout most of the 20th Century. 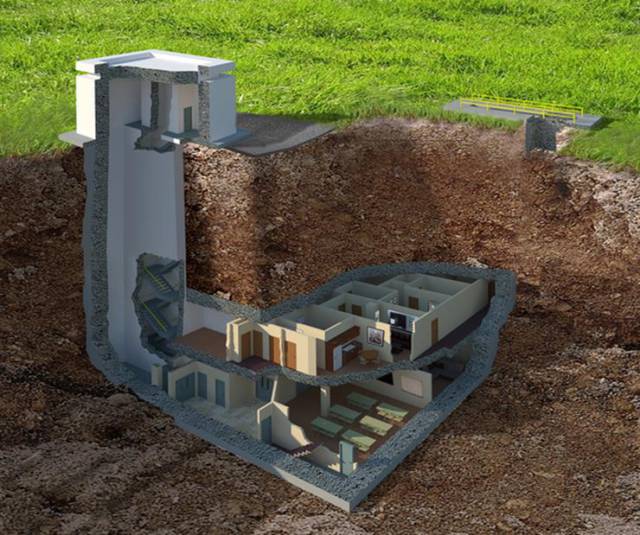 During that time, many countries started building fallout shelters, or underground bunkers for high-ranking, government officials. In the event of a nuclear attack, the president, his family, and his cabinet, along with many senior army and navy officers would be ushered into these bunkers to keep them safe to rebuild in the aftermath. In time, many American civilians got the same idea and built their own shelters… 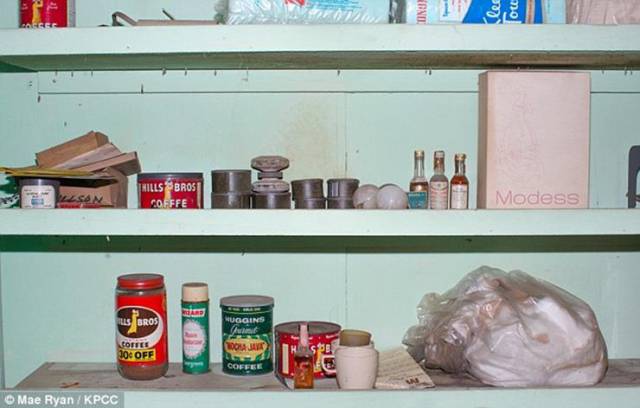 The Otcaseks new bunker was full of nearly all the items that someone would need to survive in the event of a nuclear attack. The bunker contained water, canned food, clothing, and medicine, as well as paper products and books. There was enough room in the shelter for a family of four. What was even more remarkable, was that all the items were still wrapped in their, mostly untouched, vintage packaging. 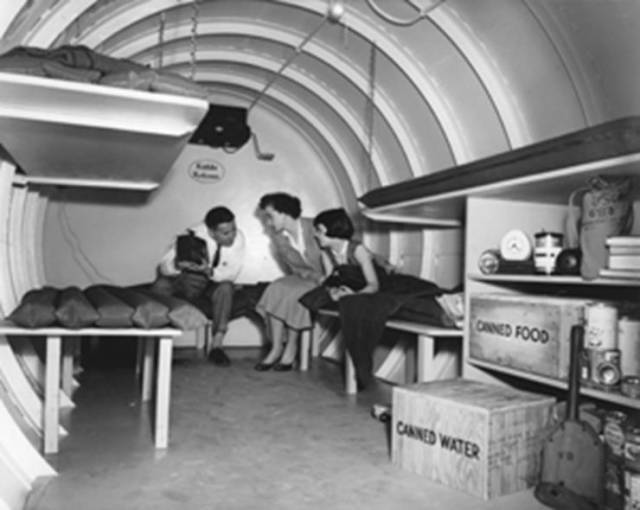 The Otcaseks estimated that the amount of food and various supplies would only have lasted the family about two or three weeks at most. Still, with their new warehouse of vintage supplies, the happy couple decided they wanted to learn a bit more about who built the bunker. Some research told them that the house’s previous owner, Alvin Kaufman, had built the shelter in 1961… 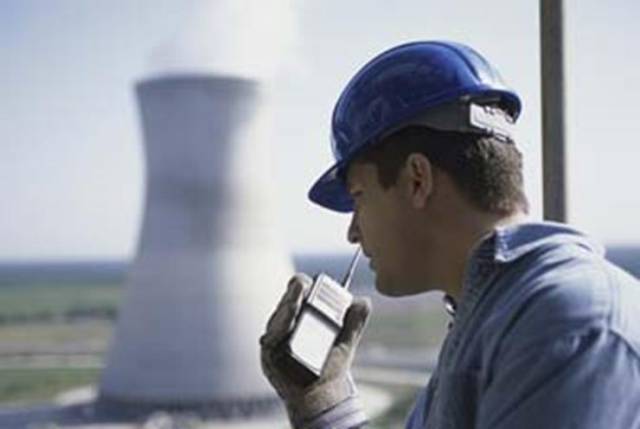 Alvin Kaufman was a nuclear engineer working for the U.S. Government. He knew firsthand the dangers that a nuclear attack would have posed and the ramifications of surviving such an attack. He decided early on that he wanted to protect his family from the ever-looming threat of nuclear war and resolved to spend all of his extra time, money, and effort, into building a safe refuge for them. 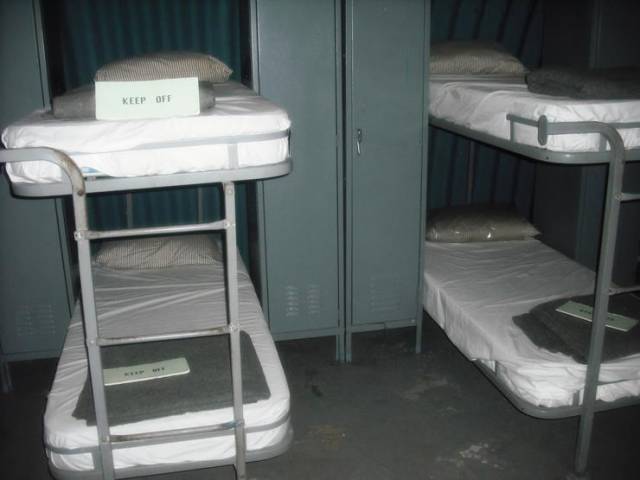 According to Alvin’s daughter Debra, he offered to build one giant fallout shelter for all of his neighbors to share but was turned down: even amidst the growing fears of an imminent nuclear attack. According to Debra, the shelter also contained several sleeping areas, a water tank, and an air filter that could be cranked by hand. The Otcaseks, who were glad to have learned a bit more about the bunker’s history, began to take inventory… 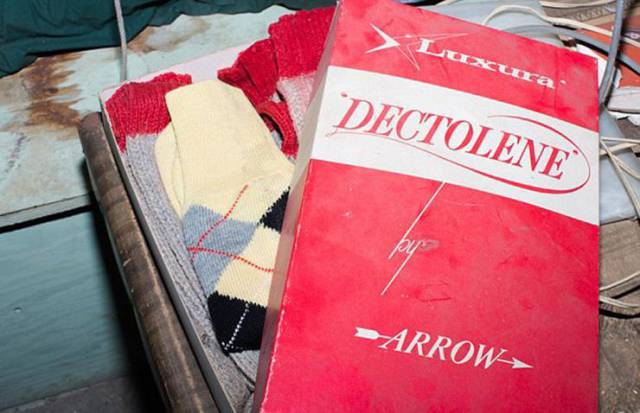 The first item they found was an old Arrow brand Argyle sweater. Argyle, which is derived from the tartan symbol of Clan Campbell in Western Scotland, has been used to decorate everything from socks and sweaters, to robes and kilts. Arrow brand clothing still makes shirts today, though the styles have been slightly updated. 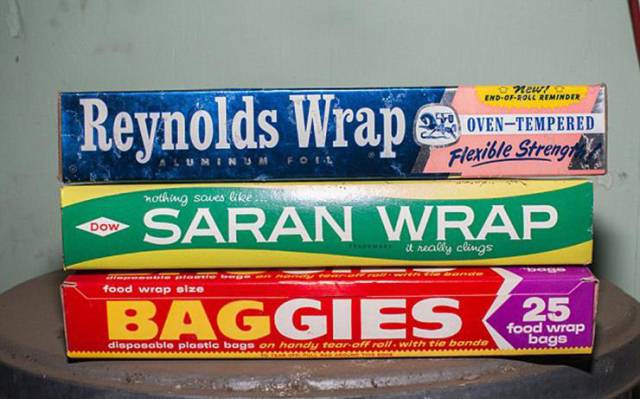 The Kaufmans made sure to keep a number of handy cooking and preservative products handy as well. This stack of Saran Wrap, Reynolds Wrap, and plastic baggies were all perfectly designed to store food. These vintage boxes would be worth a fairly decent amount of money in this day and age, even if the products they contain have greatly improved over the years. 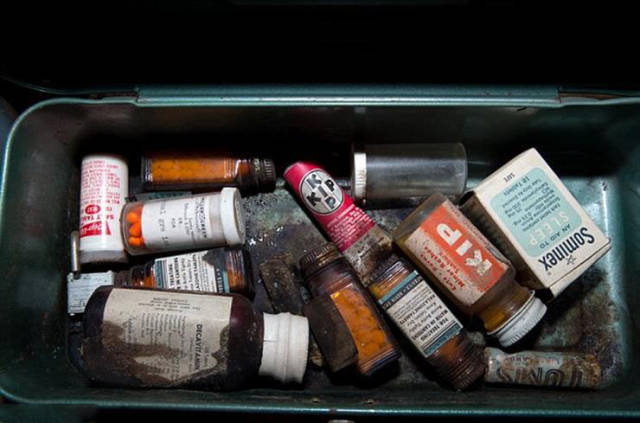 The new family also found an additional container that contained all manner of long-since-expired medications. Sleeping pills, medication for nausea, ointment, and an assortment of nondescript orange tablets in various bottles littered the bottom of the case. Thankfully, the Otcaseks weren’t taking any of them. 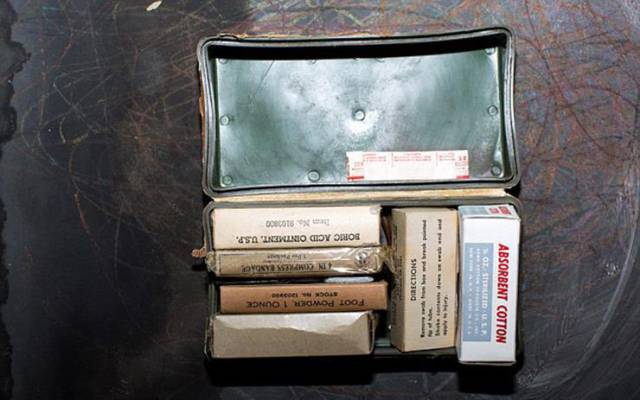 The Kaufmans had also been prepared for physical injuries and brought along a First-Aid kit containing foot powder, bacitracin ointment, and absorbent cotton gauze. Kits like these were the most common feature of Cold War Era Fallout shelters. Some would even contain sutures and sewing kits to use in the event of a grievous injury. The bunker also contained some food… 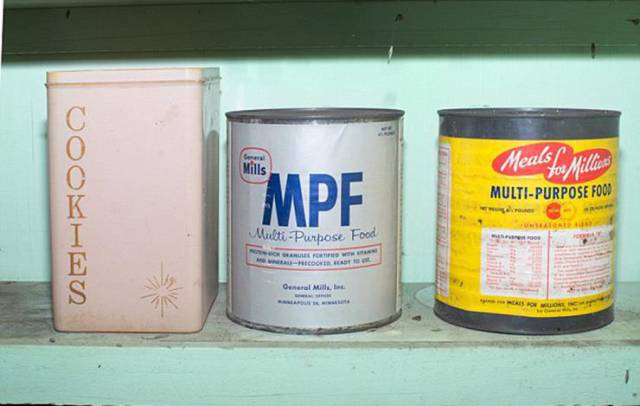 Other necessities were also stocked into the shelter. A tin of cookies sat on a shelf next to two packages of Multi-Purpose Food. This powdered protein mix was created by California restaurateur, Clifford E. Clinton in 1946. Clinton had reached out to his friend Dr. Henry Borsook, a biochemist, to develop a food substitute that would provide proper nutrition at a very affordable price. 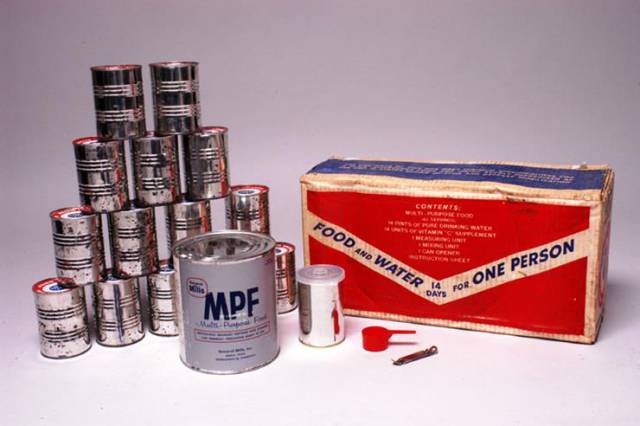 In order to keep the family at least partially entertained during their potential stay in the bomb shelter, Kaufman packed nearly a dozen issues of Analog Science Fiction and Fact Magazine. The American Sci-Fi magazine was first published in 1930. The magazine was best known for publishing many stories that would become classics including stories by Isaac Asimov, Robert A. Heinlein, and John W. Campbell. 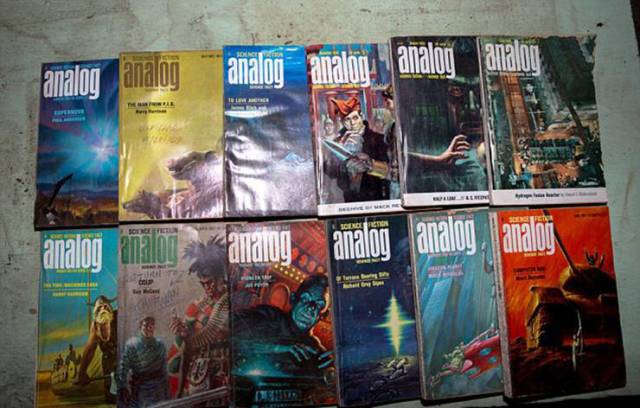 Magazines like Analog were prominent and widely published periodicals in the 1950s and 60’s. In an era of exploration and science, Americans, in particular, clamored for more stories about science, parallel dimensions, robots, extraterrestrials, futuristic technologies, and the dangers of encountering or abusing any of them. Books, of course, weren’t the only commodities needed for people locked together in a vault. 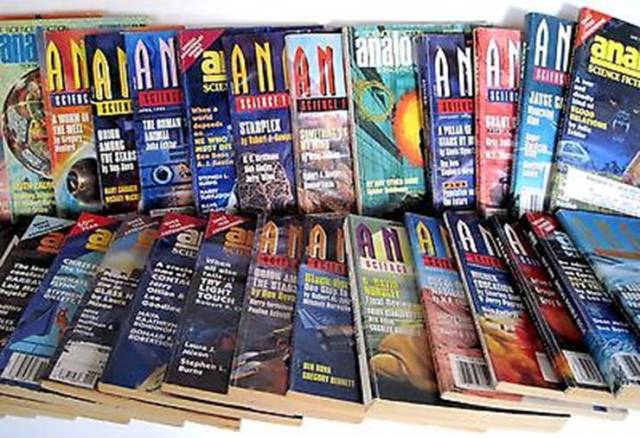 The Otcaseks also found a roll of old Kleenex paper towels, although a single roll might not have lasted very long if used by a family of four. Kleenex was first created in the 1920’s as a way to remove cold cream and makeup but soon branched into a number of different products, including Cottonelle, Huggies, and VIVA. 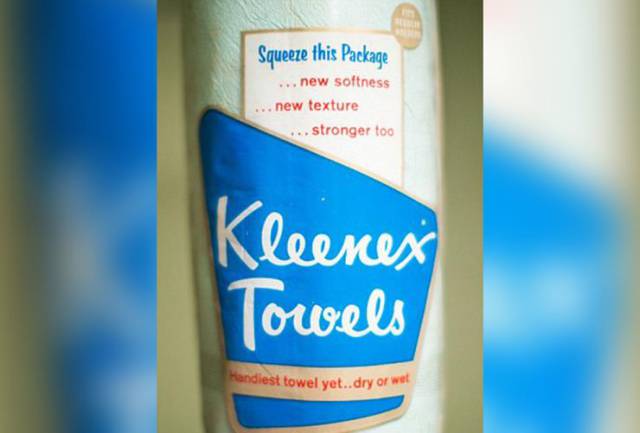 The bunker also contained a package of Dixie Paper Cups, which were first made in 1907 as a way for trains to easily serve drinks of cold water to their passengers on long drives. Originally called the “Health Kup”, these small, paper cups paved the way for all that came after them. But the last thing the Otcaesks found in the bunker is arguably the most important… 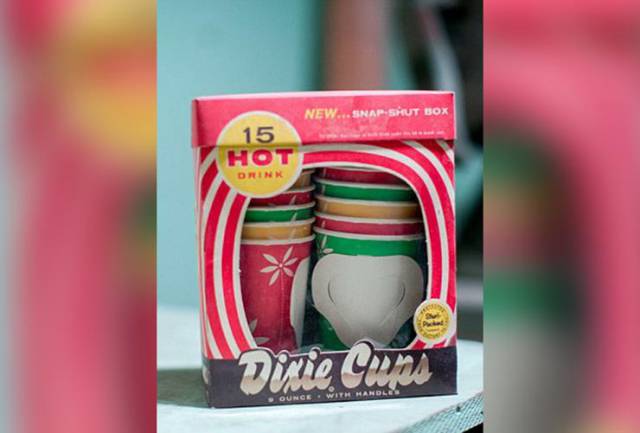 All around the room, on shelves and tables, sat jars and cans of ground coffee of several different varieties. Most of them had never been opened, though some, like the rusted one pictured here, have been ravaged by time. The Kaufmans it seemed, had a love for the flavored bean and knew that if it came to nuclear war, they’d need enough to keep them sane as they waited out the fallout together. 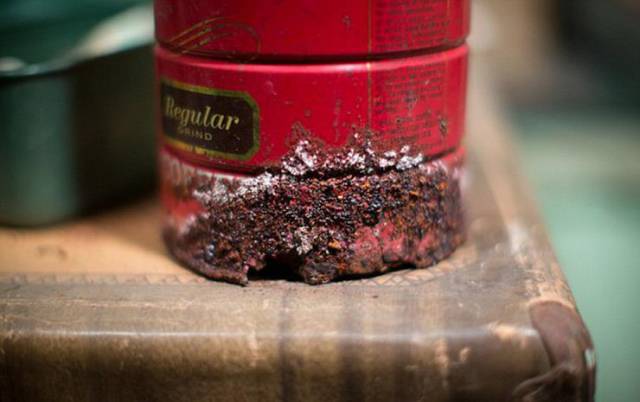 Thankfully, nuclear war never came and the Kaufmans never had a reason to use Alvin’s bomb shelter. In the meantime, the Otcaseks are more than happy to have inherited this rare, vintage gem and all of the amazing items contained within. Not just for the history, but for the value these will certainly bring. 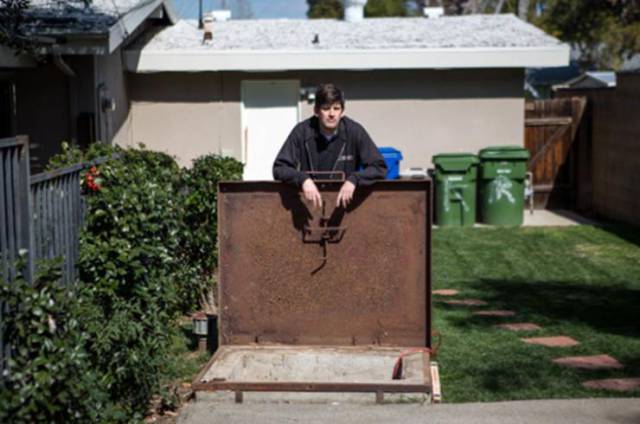