Ladies Are Getting Elf Ears 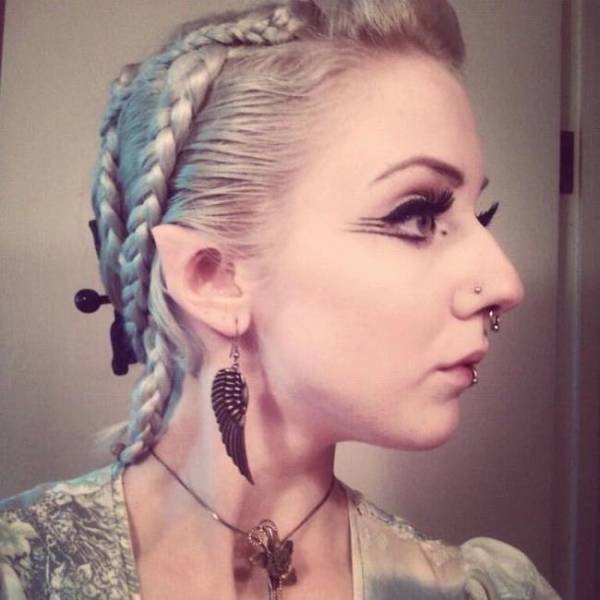 A body modification that really took off after the Lord of the Rings films was having your ears shaved into points at the top to give the impression that you're a creature of the elven variety. Out of all the extreme body modifications on this list, elf ears might be the one that's the creepiest.

The Vampire Woman of Mexico 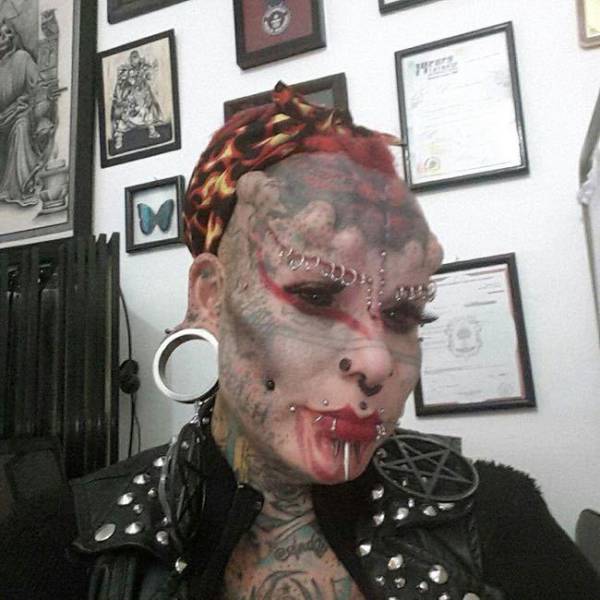 María José Cristerna, or the Vampire Woman, is a former lawyer and current mother of four who also happens to hold the world record for the woman with the most body modifications. She has a collection of transdermal implants on her forehead, chest, and arms, as well as all the piercings.

Magnetic Finger Implants (How Do They Work?) 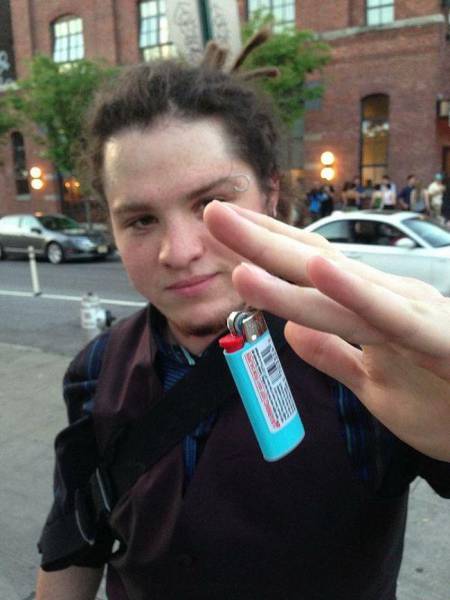 For people who are interested in sensory augmentation, magnetic finger implants make total sense. Pun intended? The piercings supposedly give the wearer the ability to sense electromagnetic shifts around them, and they can pick up small pieces of metal with their fingers. 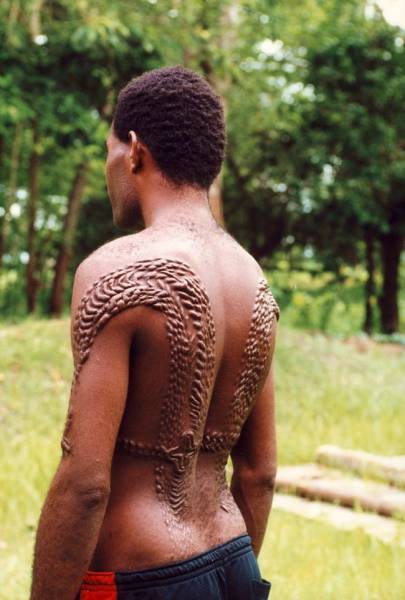 Papua New Guinea is a place full of curious tribal customs, but the most painful custom is that of crocodile scarification. Traditionally, the young men of the tribe are inflicted with hundreds of deep cuts in cascading patterns down their backs, arms, chest and buttocks to give their skin the look and feel of a crocodile’s body. All of this work is done with a sliver of bamboo. 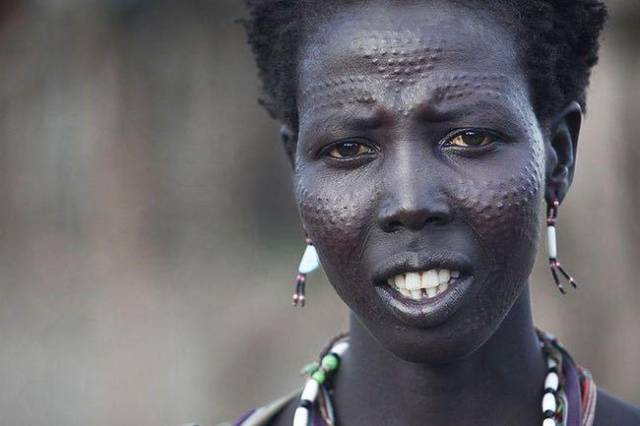 The scars carved across the faces and bodies of Ethiopian and Sudanese tribe members are some of the most painful types of scarification known to man. Many of the markings are etched onto the tribe's members bodies at a young age, and they're done so without any anesthetic. If the receiver shows any signs of pain, they'll be seen as weak. Many of the women of the tribe see the scars as an ability to cope with pain and a sign that they will be able to cope with childbirth in future.from our partners 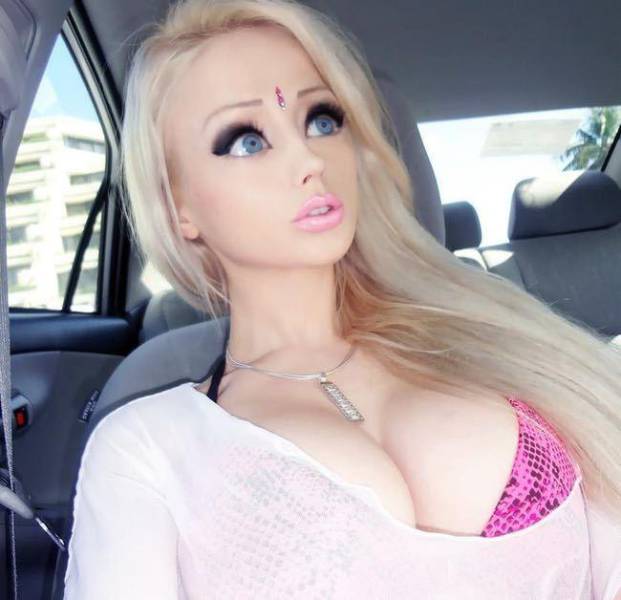 Although the modifications of the human Barbie are highly debated, there's no denying that through contacts, breast augmentation, and a ~ totally legit workout routine~ Valeria Lukyanova has made herself look like a Barbie doll, and has worked her way into your nightmares.

The Lizard Man Is More Than a Pretty Face 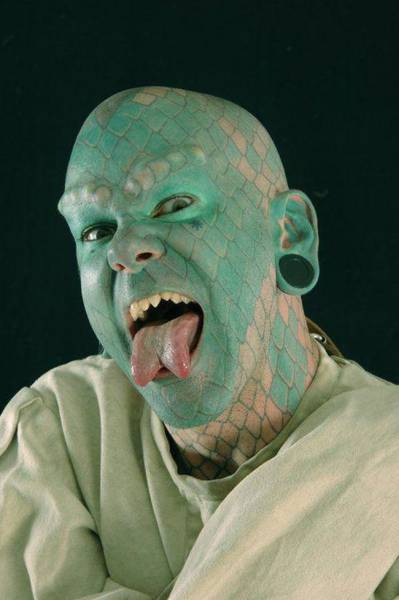 Erik Sprague was born in Fort Campbell, Kentucky and he (presumably) was not covered in scales. Before he began undergoing a transformation that left him with sharpened teeth, a full body of green scale tattoos, a bifurcated tongue, and sub-dermal implants, he was a PhD candidate at the university of Albany. Now he just hangs out in Austin and makes that sweet sweet Lizard Man money. 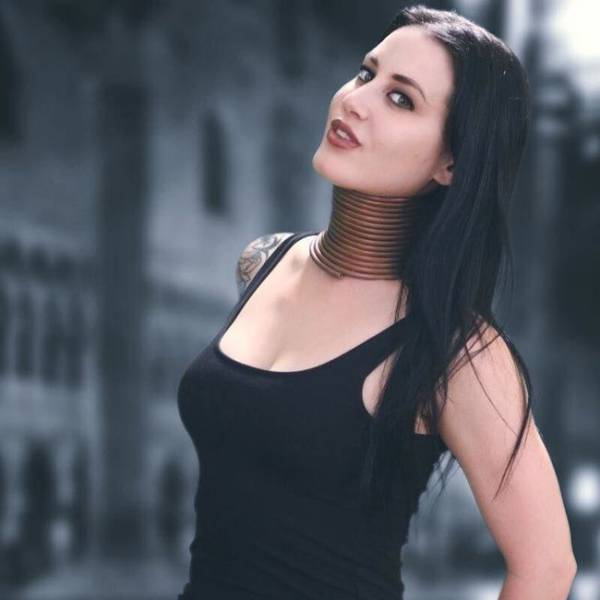 While in middle school, Sydney V. Smith became obsessed with the women of the Kayan Lahwi tribes of Thailand and Burma who encase their necks in brass rings. Since the age of 28, she's been wearing brass rings around her neck in an attempt to elongate it and she says it's working! 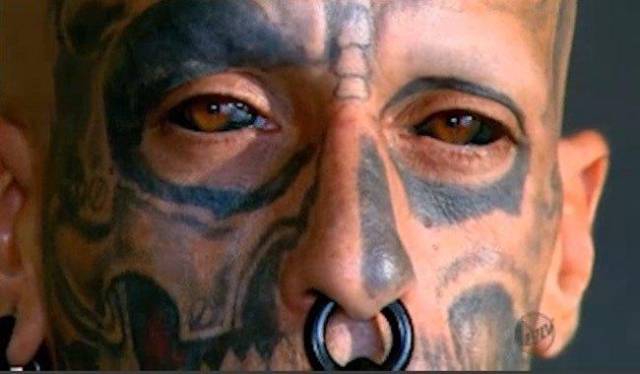 Rodrigo Fernando, a man with 70% of his body tattooed, had black ink put in his corneas in 2013. When he was interviewed a few days after the session, he said, "I wept ink for two days." 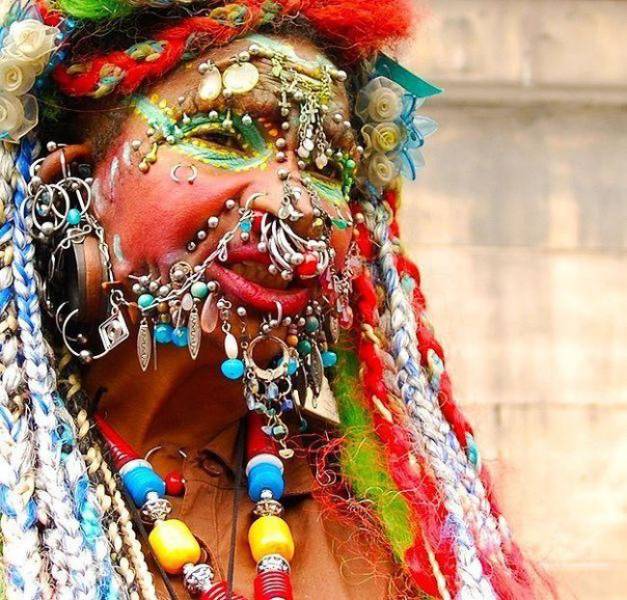 The most pierced woman in the world, Elaine Davidson, has 6,925 piercings, and some of them weigh up to seven pounds. In 2011 she married the love her life, a pretty boring-looking guy with nary a tattoo. The story of their wedding is very sweet because duh, they're in the kind of love that can only occur when one of you has almost 7,000 piercings.

Man Cuts Off Nose to Look Like Red Skull 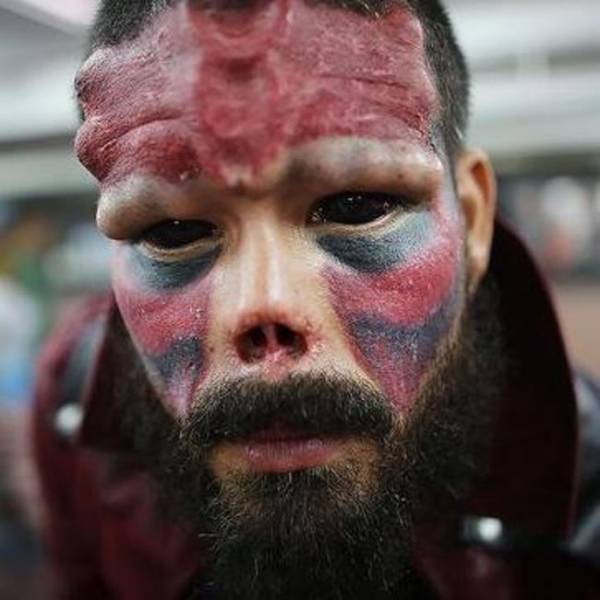 Henry Damon, a Venezuelan fan of fictional Nazis, has undergone a crazy amount of body modification to make himself look like the Captain America villain, Red Skull. Not only has he removed his nose and tattooed his face red, but he's also tattooed his eyes black. Real talk: He certainly looks like a comic book villain, but he doesn't really resemble Red Skull.  ¯_(ツ)_/¯ 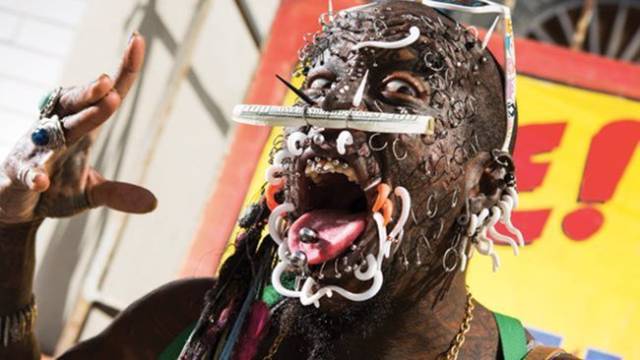 It's hard out there for a guy who advertises himself as "the Creature," especially when he's trying to find a place to live. Oddly enough, the city he's having trouble finding an apartment in is Los Angeles, a town that seems like it would be used to renting places to weird-looking dudes. Supposedly Boykin adds a new tattoo every day, and says that, "Without feeling the needle feels like I'm losing my purpose in life." 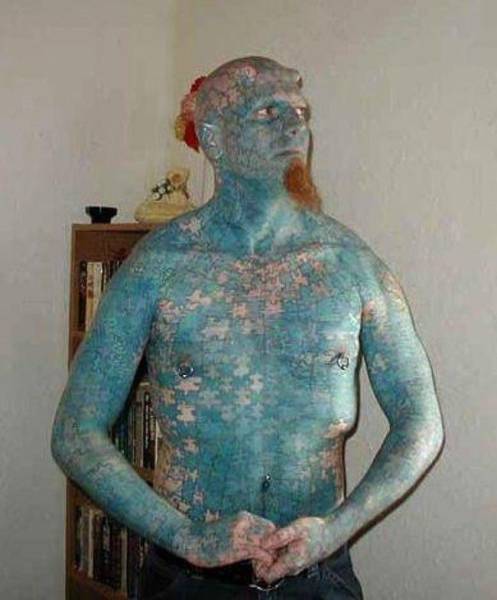 The Enigma is a sideshow performer who began undergoing a jigsaw puzzle-related transformation in 1992, and still hasn't stopped. He tours constantly, so if you want to see him throw chainsaws or whatever, you can totes do that.

Man Cuts Off His Ears to Look Like Pet Parrot 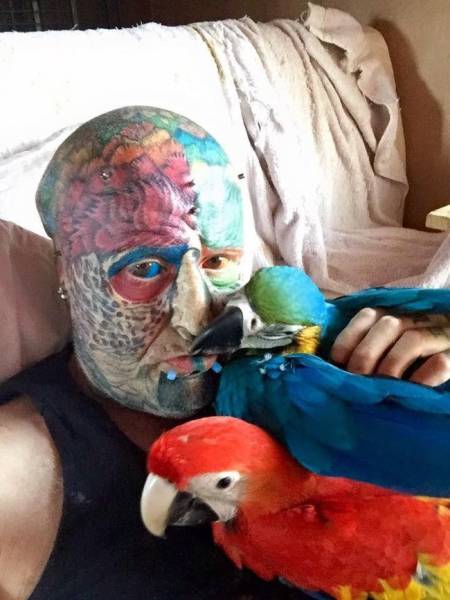 You know how people say that pets and their owners look alike? Well Ted Richards from Bristol, England underwent a six hour procedure to have his ears removed so he could look more like his parrots. There are no reports on his feelings on crackers, although one can assume he finds them favorable.

Doctors Can Now Cut Abs into Your Body 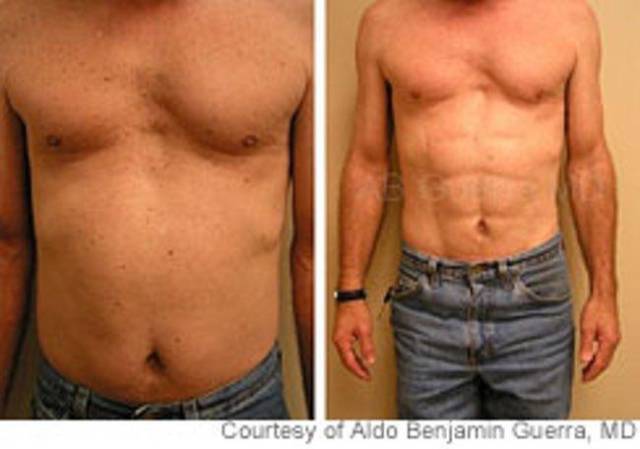 Do you want six-pack abs but don't want to do all the boring work that it takes to get them? Why not have a doctor perform "precision etching" on your stomach to give you the appearance of abs, without any of the actual muscles? 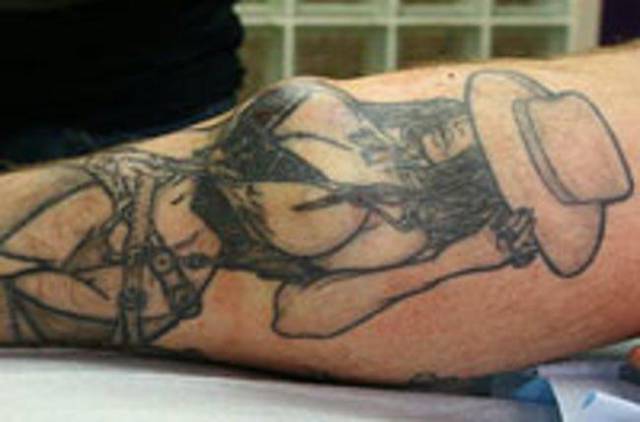 This bod mod is mostly extreme in its creep factor. A Canadian man one-upped all the other dirtbags out there when he had silicone "breast implants" installed in his tattoo of a scantily clad woman. Dirtbags, don't you ever change.

Australian Artist Implants an Ear in His Arm 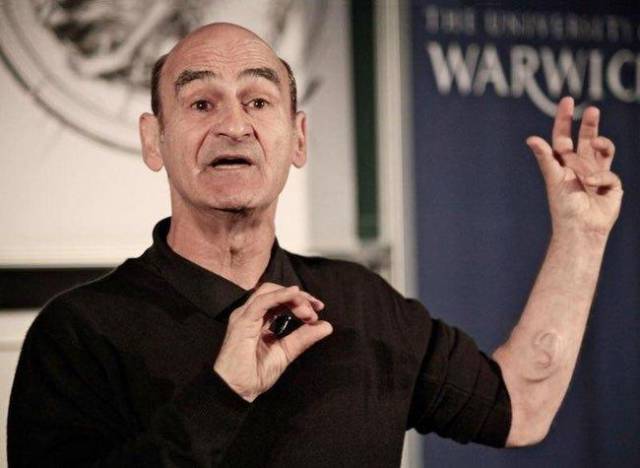 Because he wants people to hear what he's hearing, an Australian performance artist and professor at Curtin University in Western Australia, had an ear implanted in his arm. The ear will soon have the ability to record sound and send it to the Internet. If you've ever been curious about which way the water in Australia's toilets flows, now's your time. 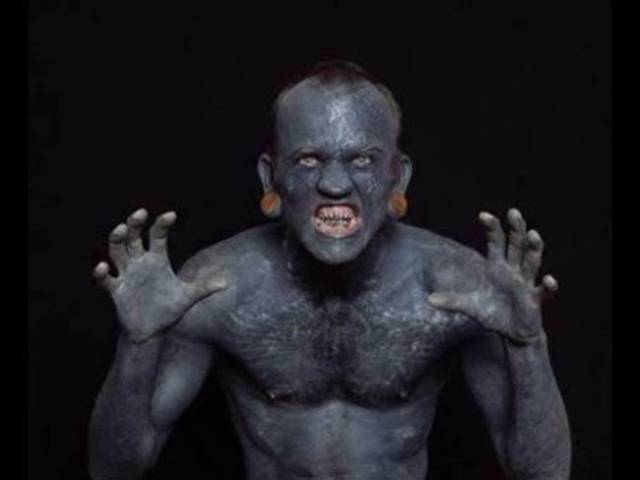 Lucky Diamond Rich is a guy who has so many tattoos (his entire body is covered) that he decided to tattoo more tattoos on to those tattoos. The New Zealander started off with standard tattoos, then got bored and tattooed his entire body black (including his gums), and then he started putting more tattoos on top of that coating. For now (and probably ever) he holds the Guinness Book of World Records title for Most Tattooed Man. 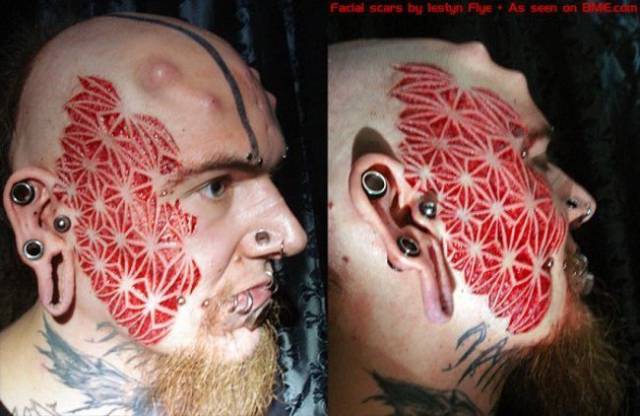 Scarification has been around since before the western world tried to colonize everyone, but it still looks weird when you see it in modern times. Especially when it's on some dude's face. If this doesn't change the way you see pizza forever, then you're fooling yourself. 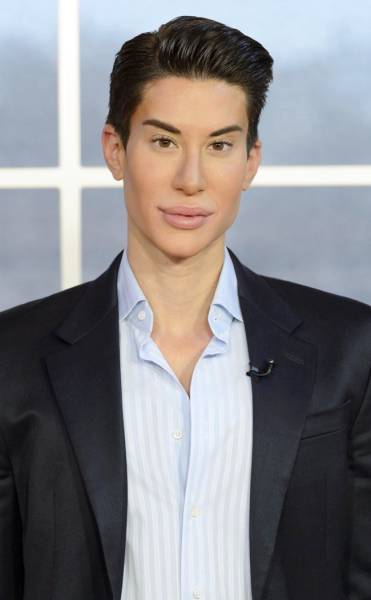 Justin Jedlica is a guy that looks like a Ken doll, sort of? He's admitted that he spent $100,000 on body sculpting procedures including five rhinoplasties, a cranial brow bone shape, and augmentations to his cheeks, lips, buttocks, and chin. Somehow he's still creepier than the Vampire Woman. Also, fun fact, he and the human Barbie totally hate each other. 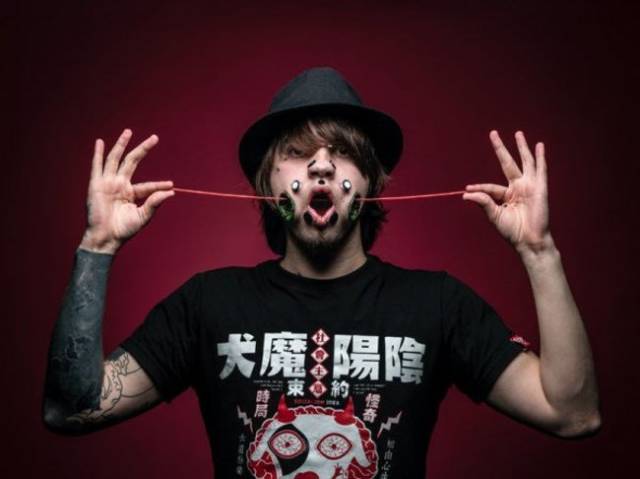 Twenty-two-year-old Joel Miggler has holes all over his face, but if you ask him (and Guinness!), they're called flesh tunnels and he's psyched about them. The largest holes are 34mm in diameter, and he's insisted that he'll be bumping up the size ASAP. If anyone has footage of this guy trying to eat mashed potatoes, we want to see it. 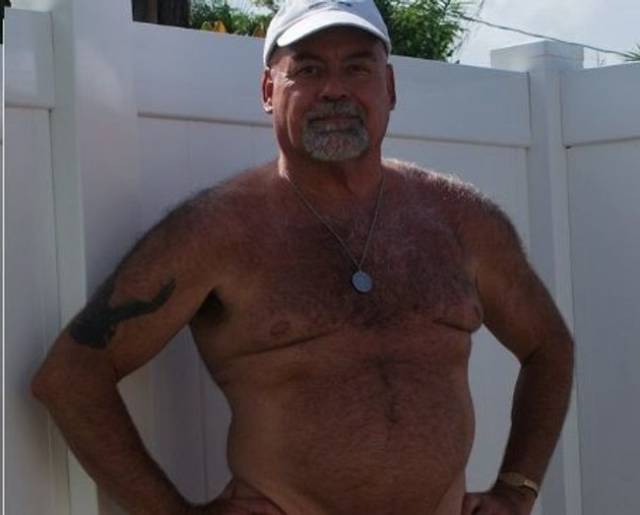 So of course this happened in Florida, but a guy who goes by the name of "Gelding" has gone through a lengthy process of having his genitals removed. Starting in 1994 he was castrated, and in 2011 he completely removed his external genitalia.

Russian Guy Turns Himself into a Platypus 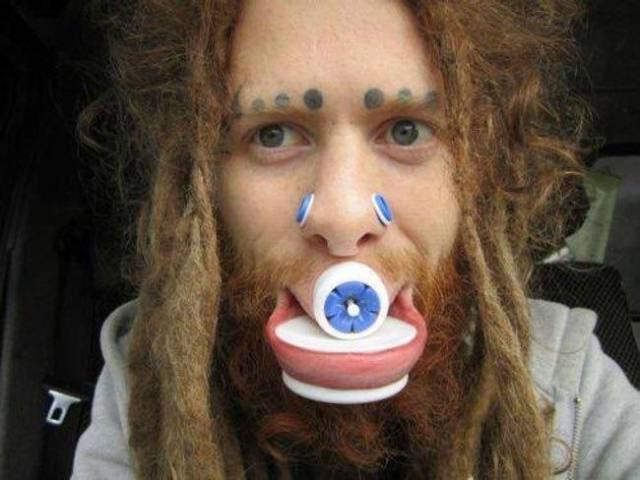 Jenya Bolotov, a completely normal person from Russia, spent seven years stretching out his lips to look more like a platypus. Although he says that his real spirit animal is a bird. Oh, and ladies, he's single. 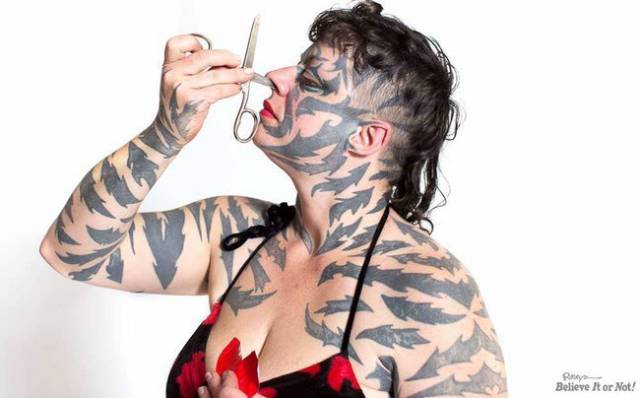 Katzen Hobbes is a woman who, from a very young age, wanted to be covered in tiger stripes. So from the ages of 18-28 she had her entire body tattooed, and she even had cat whiskers installed for a short period of time until they began hampering her field of vision.

Lips: the New Windows to the Soul 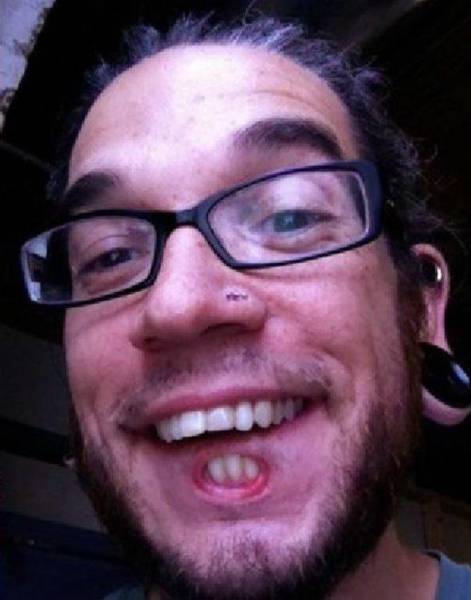 People have piercing their labrets and wearing lip discs for centuries, but now you can finally show the world what your gums look like. You get extra cool guy points if you get a gum tattoo. 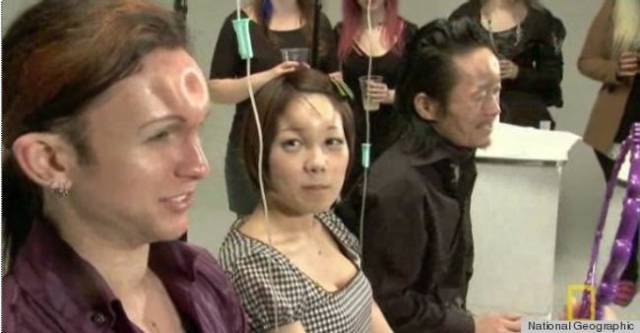 In 2012, a new body mod fad called "bagel heading" popped up in Japan. It involved having saline injected into a persons head in the shape of a bagel. The "bagels" fade after about 16 hours. But still, NO THANKS!