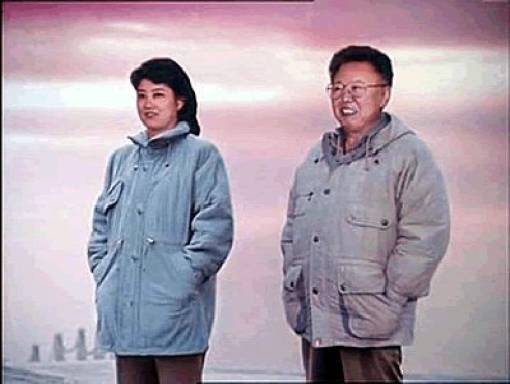 His parents were future North Korean dictator Kim Jong Il and his consort, Ko Young Hee. He had an older brother named Kim Jong Chul and would later have a younger sister named Kim Yo Jong.

However, a recent move by the US Treasury Department to sanction Kim Jong Un listed his official date of birth as January 8, 1984.

Jong Un — here with his mother — lived at home as a child. 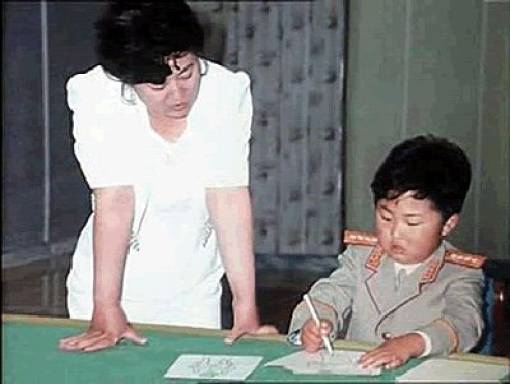 Then it was off to Switzerland to attend boarding school. 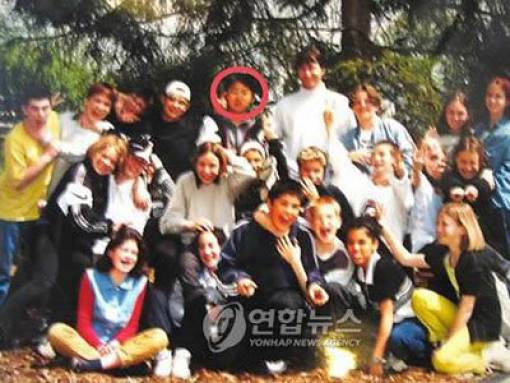 Called "Pak Un" and described as the son of an employee of the North Korean embassy, Kim Jong Un is thought to have attended an English-language international school in Gümligen near Bern.

Kim Jong Un is described by former classmates as a quiet student who spent most of his time at home, but he had a sense of humor, too.

"He was funny," former classmate Marco Imhof told The Mirror. "Always good for a laugh."

"He had a sense of humor; got on well with everyone, even those pupils who came from countries that were enemies of North Korea," another former classmate told the German newspaper Welt am Sonntag. "Politics was a taboo subject at school ... we would argue about football, not politics." 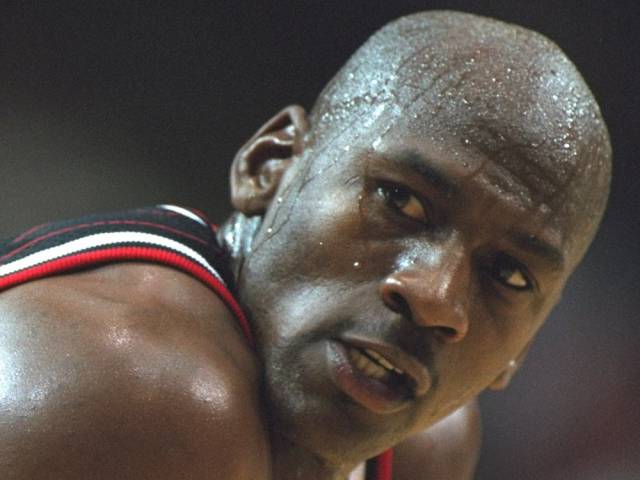 The young Korean reportedly had posters of Jordan all over his walls during his Swiss school days. Although Kim Jong Un was overweight and only 5-6, he was a decent basketball player.

"He was a fiercely competitive player, very explosive," former classmate Nikola Kovacevic told The Mirror. "He was the play maker. He made things happen."

He also had a "fantastic" collection of Nike sneakers.

After school in Switzerland, he returned home for military schooling. 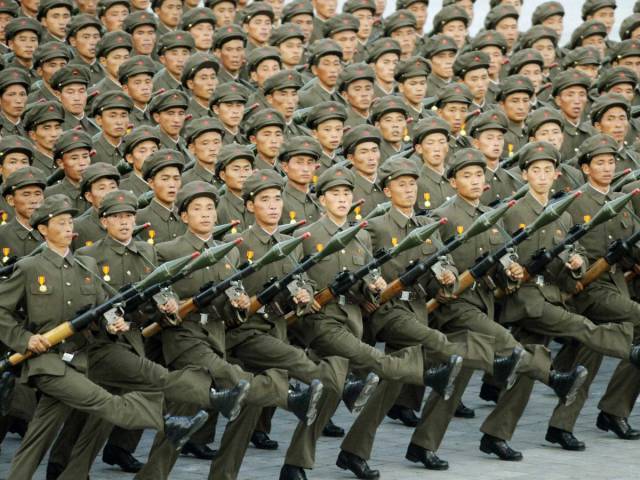 Upon his return to North Korea, Kim Jong Un attended Kim Il Sung Military University with his older brother. Some reports say they started to attend their father's military field inspections around 2007.

While his father faced death, Kim Jong Un was rapidly promoted up the chain of political and military leadership, despite having little experience in either.

He was made a four-star general, deputy chairman of the Central Military Commission of the Workers' Party, and a member of the Central Committee, according to the BBC.

Kim Jong Un has a theme song known as "Footsteps." 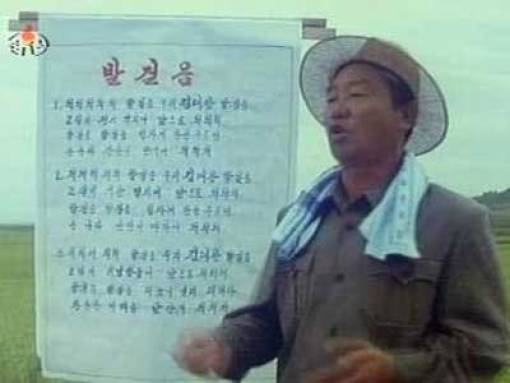 "Footsteps" looks and sounds like a propaganda song from the Soviet Union.

The song calls people to follow in "Our Admiral Kim's footsteps." Here's a sampling of the lyrics:

further the sound of a brilliant future 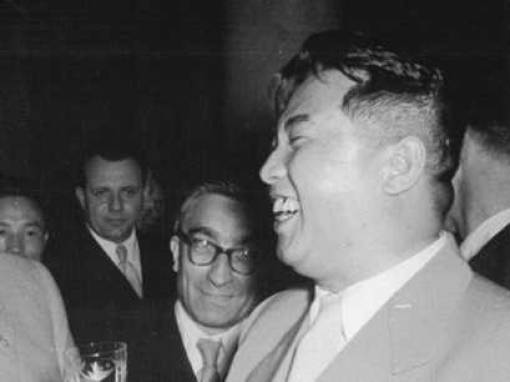 Kim bears a clear resemblance to his grandfather, Kim Il Sung, in appearance, haircut, and mannerisms.

Rumors had circulated that Kim Jong Un had received plastic surgery to enhance the resemblance even further, although the North finally responded and called the allegations "sordid hackwork by rubbish media."

"The false report ... released by enemies is a hideous criminal act which the party, state, army and people can never tolerate," said the official Korean Central News Agency. 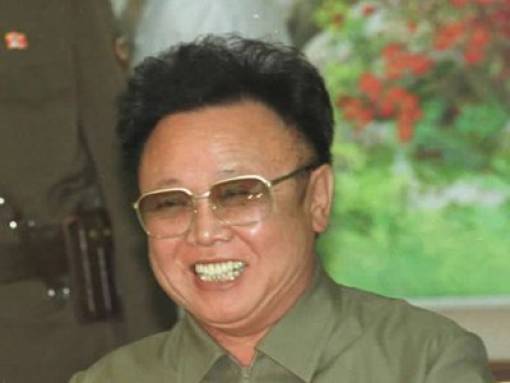 When Kim Jong Il died of a heart attack on December 17, 2011, the young Kim Jong Un inherited the world's fourth-largest military, a nuclear arsenal, and absolute control over North Korea.

Around 30 when he took power, Kim Jong Un is the youngest head of state in the world.

Some originally believed that Kim Jong Un's aunt and uncle were actually calling the shots. 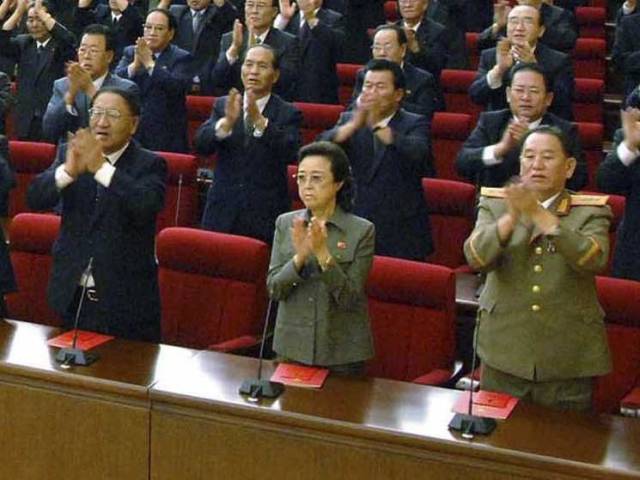 Among Kim Jong Un's most trusted advisers were his aunt Kim Kyong Hui and her husband, Jang Sung Taek, both 66. The couple was reportedly ordered by Kim Jong Il to control the country's military and help the young leader consolidate his position while he gains more experience.

At a meeting of the DPRK Workers' Party, both were photographed sitting close by. Their most important job, it seems, is to push his role as a powerful figure among some generals who do not trust him, according to The Telegraph.

But at the end of December 2013, Kim Jong Un had his uncle and his uncle's family executed, apparently in a bid to stop a coup against his rule. 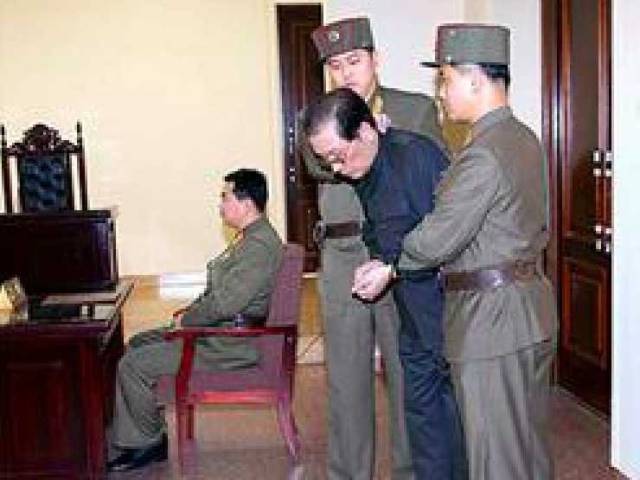 On December 12, 2013, Kim Jong Un had his uncle Jang Sung Taek executed. He was charged with having tried to take control of North Korea through a military coup. Following the uncle's execution, there were reports that Kim Jong Un continued to purge the rest of the uncle's family.

But North Korea's ambassador to the UK denied that Jang Sung Taek's family was also executed. Instead, the ambassador claimed that only Jang Sung Taek was killed by firing squad following a trial.

He's married to a former cheerleader and may have two kids. 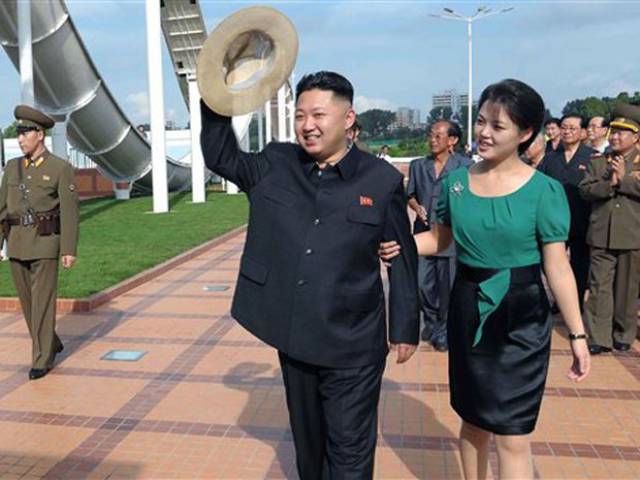 Leaders in the hermit kingdom are often very secretive when it comes to their significant others, but Kim Jong Un often has his wife join him and allows photographs.

North Korean media revealed in July that he was married to Ri Sol Ju — a former cheerleader and singer — but no one knows exactly when they were married, according to NBC News.

South Korean intelligence believe the couple probably married in 2009 and already had one child. There are rumors Ri Sol Ju gave birth to a child in 2012, with many believing it was a girl.

The couple is believed to have had another child, in 2015. 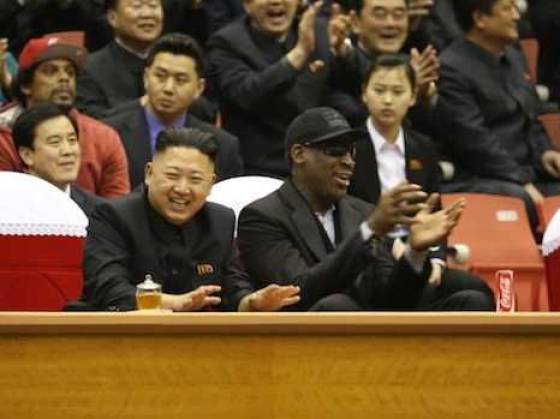 Everyone in the family is apparently a huge Chicago Bulls fan.

His father owned a video library of "practically every game Michael Jordan played for the Chicago Bulls." Kim Jong Il tried unsuccessfully to get Jordan to visit in 2001.

Kim Jong Un had tons of Jordan posters as a kid. Brother Kim Jong Chol was photographed as a child wearing a Bulls Jersey: No. 91 — Rodman.

But recently, things haven't been going so well. 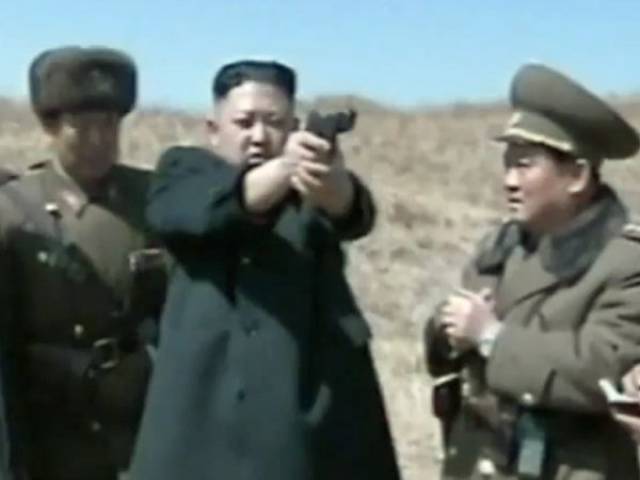 In 2013 he was reportedly the target of an assassination attempt. South Korean intelligence believes the young leader was targeted by "disgruntled people inside the North" after he demoted a four-star general, which resulted in a power struggle.

Perhaps as a means of reasserting control, Kim Jong Un has become extremely belligerent, shutting down all links with South Korea and threatening thermonuclear war against his neighbor and the US. His father and grandfather used to make these threats all the time without following through.

Kim Jong Un has continued to be belligerent with South Korea and the West throughout his rule in hopes of bolstering his authority. 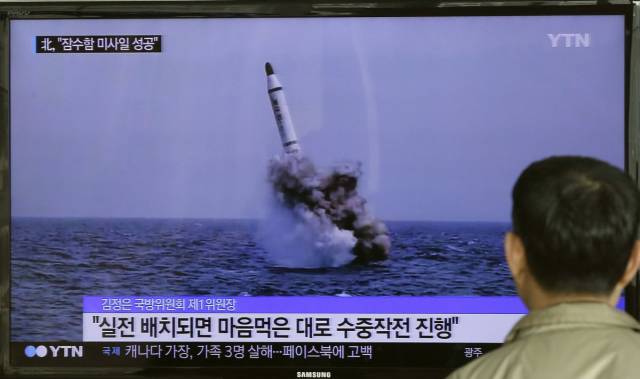 In 2013, North Korea conducted its third-ever nuclear test and its first under Kim Jong Un. And in April 2015, a top US general warned that North Korea could develop nuclear missiles capable of reaching the shores of the western US.

The nuclear tests and international condemnations continued into 2016. 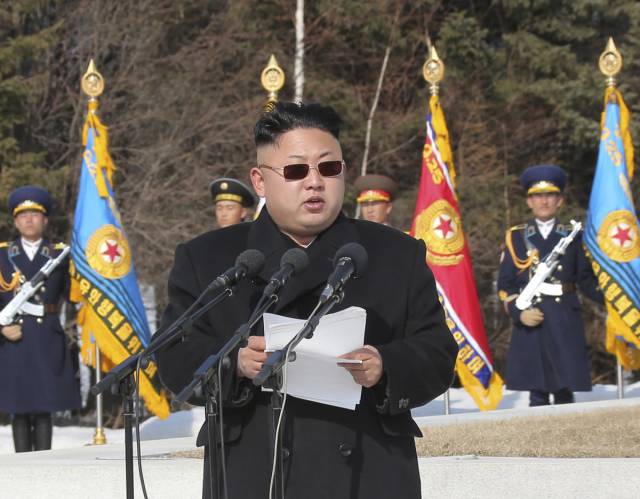 On January 5, 2016, North Korea conducted its fourth-ever nuclear test and its second under Kim Jong Un. Pyongyang claims the test was a miniaturized hydrogen bomb.

In response to the detonation, world leaders have strongly come out against North Korea. Even China, North Korea's main ally, has said that it strongly opposes the tests.

In September 2016, Kim Jong Un oversaw the fifth and most powerful nuclear test by North Korea to date. Based on some estimates, the blast from the warhead was more powerful than the bomb dropped on Hiroshima.

The tests signal a commitment on the part of Kim to press forward with the armament of his nation. If undeterred, experts estimate North Korea could develop nuclear warheads that could reach the US by 2020.

The assassination of Jong Un's half-brother Kim Jong-Nam in a Malaysian airport led to a global investigation of North Korea's involvement. 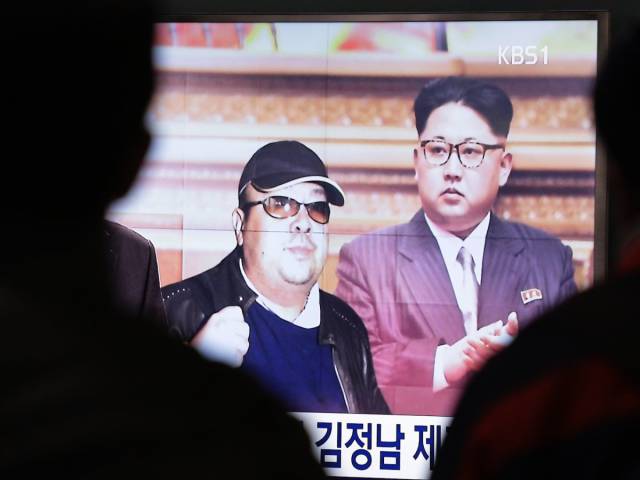 Amid worldwide suspicion of North Korean involvement, Malaysian police conducted an autopsy against the wishes of the Kim's government and named a North Korean official and several other nationals as suspects alongside two foreign women believed to be working as hired assassins.

By March, the conflict between the former allies escalated after Malaysia directly accused the North Korean government of orchestrating the murder. North Korea issued an order that prevented Malaysian citizens from leaving the country while Malaysia responded by canceling visa-free entry to North Koreans.

In the Trump era, conflict with North Korea has reached a new high. 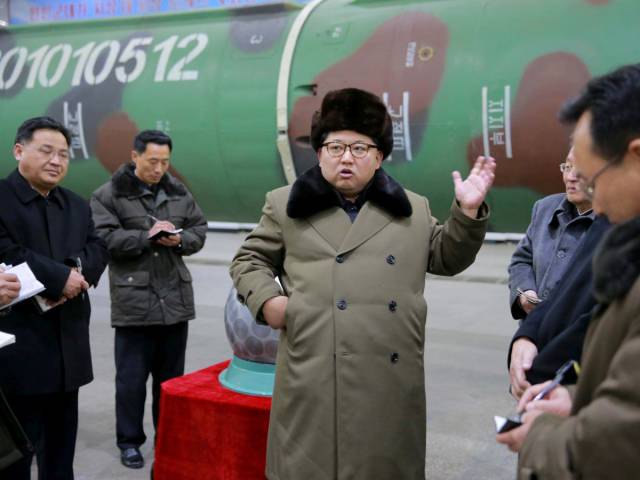 Breaking with President Barack Obama's attempts at diplomatic negotiation via "strategic patience," the Trump administration started demanding for North Korea's immediate de-nuclearization and hinted at the possibility of a preemptive military strike if its impulsive leader does not comply.

On Sunday, Kim retaliated by unsuccessfully test launching another nuclear missile at the same time that US Vice President Mike Pence was scheduled to discuss the country's arms program in Seoul, South Korea. After the US threatened a "pretty significant international response" in the event of another test, a North Korean envoy warned that nuclear war could break out at "any moment."