These Historic Photos Will Take Your Breath Away (30 pics)

This man’s name is Angelo Klonis, born in Kephalonia island Greece, he smuggled himself into the US in the mid 1930s on a ship from Piraeus Port to assist financially his family. Sources also claim he wasn’t even an US citizen at the time of his enlistment but he was determined to fight for freedom and he was allowed to join the US Army 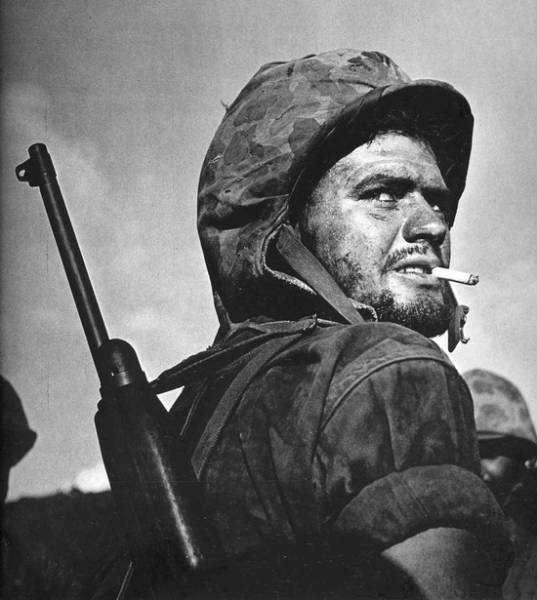 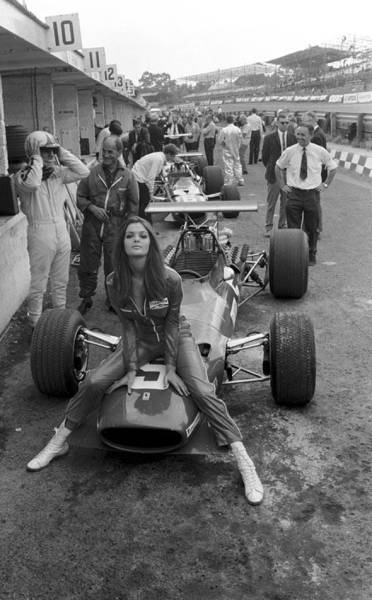 106 years ago, 146 working class immigrant women burned to death in an unsafe factory in New York City. Their bosses had locked the doors

The company’s owners, Max Blanck and Isaac Harris, who survived the fire by fleeing to the building’s roof when the fire began, were indicted on charges of first- and second-degree manslaughter in mid-April; the pair’s trial began on December 4, 1911. Max Steuer, counsel for the defendants, managed to destroy the credibility of one of the survivors, Kate Alterman, by asking her to repeat her testimony a number of times, which she did without altering key phrases. Steuer argued to the jury that Alterman and possibly other witnesses had memorized their statements, and might even have been told what to say by the prosecutors. The prosecution charged that the owners knew the exit doors were locked at the time in question. The investigation found that the locks were intended to be locked during working hours based on the findings from the fire,[44] but the defense stressed that the prosecution failed to prove that the owners knew that. The jury acquitted the two men of first- and second-degree manslaughter, but they were found liable of wrongful death during a subsequent civil suit in 1913 in which plaintiffs were awarded compensation in the amount of $75 per deceased victim. The insurance company paid Blanck and Harris about $60,000 more than the reported losses, or about $400 per casualty. In 1913, Blanck was once again arrested for locking the door in his factory during working hours. He was fined $20. 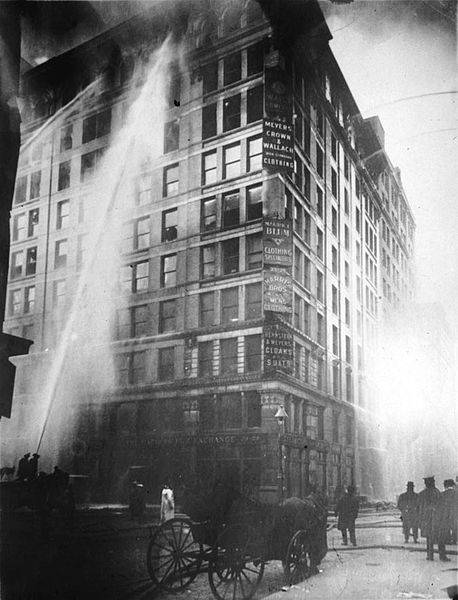 Hunter S. Thompson and his friend and attorney Oscar Zeta Acosta on their trip to Las Vegas, 1971

Strange memories on this nervous night in Las Vegas. Five years later? Six? It seems like a lifetime, or at least a Main Era—the kind of peak that never comes again. San Francisco in the middle sixties was a very special time and place to be a part of. Maybe it meant something. Maybe not, in the long run . . . but no explanation, no mix of words or music or memories can touch that sense of knowing that you were there and alive in that corner of time and the world. Whatever it meant. . . .

History is hard to know, because of all the hired bullshit, but even without being sure of “history” it seems entirely reasonable to think that every now and then the energy of a whole generation comes to a head in a long fine flash, for reasons that nobody really understands at the time—and which never explain, in retrospect, what actually happened.

My central memory of that time seems to hang on one or five or maybe forty nights—or very early mornings—when I left the Fillmore half-crazy and, instead of going home, aimed the big 650 Lightning across the Bay Bridge at a hundred miles an hour wearing L. L. Bean shorts and a Butte sheepherder’s jacket . . . booming through the Treasure Island tunnel at the lights of Oakland and Berkeley and Richmond, not quite sure which turn-off to take when I got to the other end (always stalling at the toll-gate, too twisted to find neutral while I fumbled for change) . . . but being absolutely certain that no matter which way I went I would come to a place where people were just as high and wild as I was: No doubt at all about that. . . .

There was madness in any direction, at any hour. If not across the Bay, then up the Golden Gate or down 101 to Los Altos or La Honda. . . . You could strike sparks anywhere. There was a fantastic universal sense that whatever we were doing was right, that we were winning. . . .

And that, I think, was the handle—that sense of inevitable victory over the forces of Old and Evil. Not in any mean or military sense; we didn’t need that. Our energy would simply prevail. There was no point in fighting—on our side or theirs. We had all the momentum; we were riding the crest of a high and beautiful wave. . . .

So now, less than five years later, you can go up on a steep hill in Las Vegas and look West, and with the right kind of eyes you can almost see the high-water mark—that place where the wave finally broke and rolled back.” 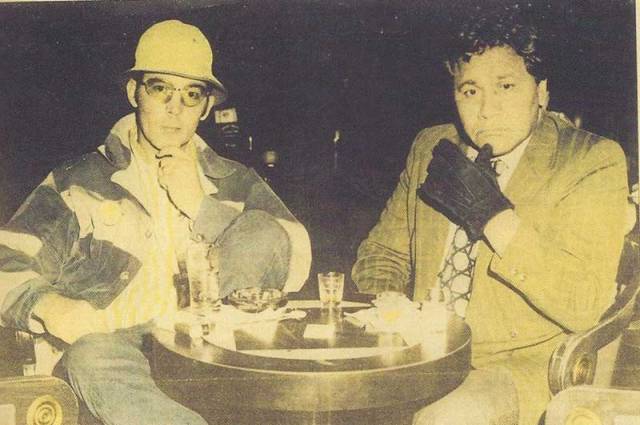 Helen Keller, 73, who is blind and deaf, guides her hand over U.S. President Dwight Eisenhower’s face as her companion Polly Thomson communicates the President’s comments by sign language on Keller’s palm, November 3, 1953 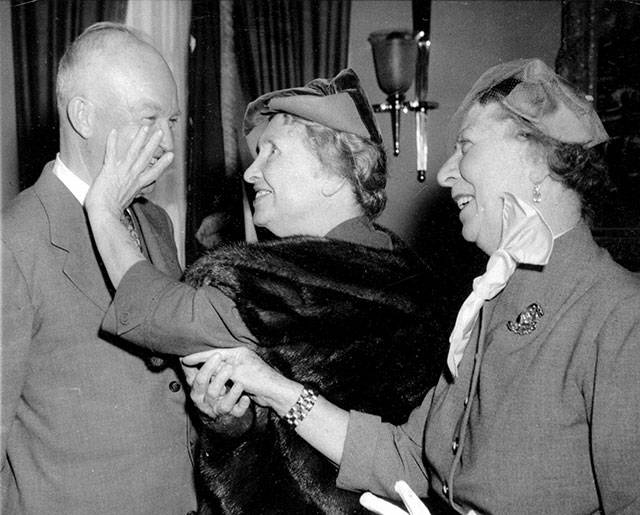 Hulk Hogan and Andre the Giant square off for the first time at Shea Stadium, 1980 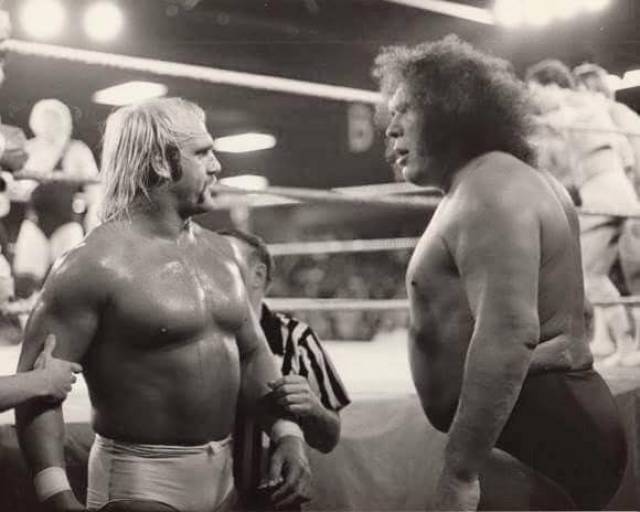 Himmler and a prisoner locked in a staring contest, 1941 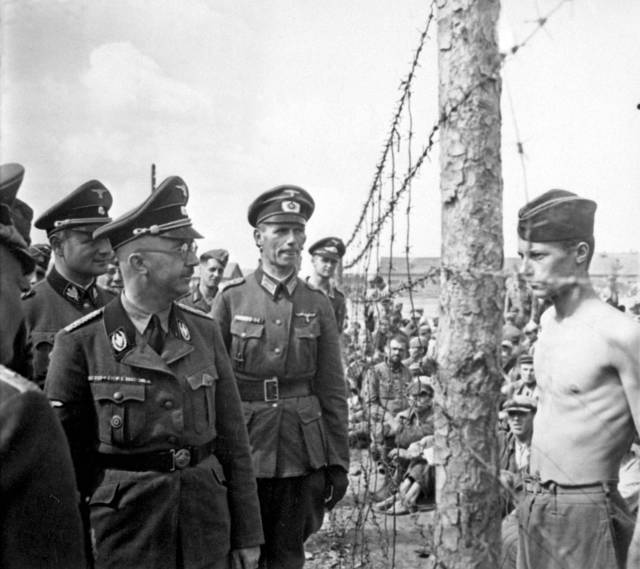 Martin Luther King being arrested for demanding service at a white-only restaurant, 1964 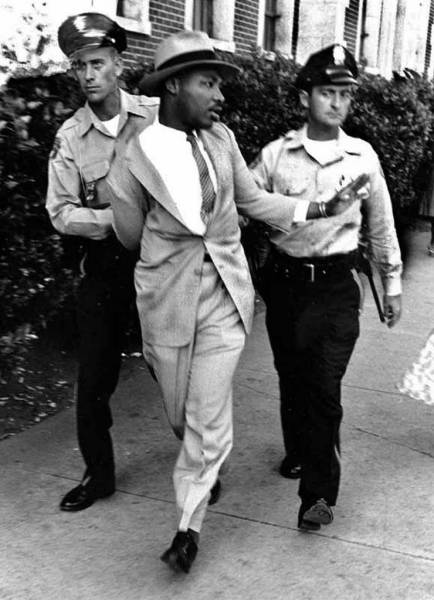 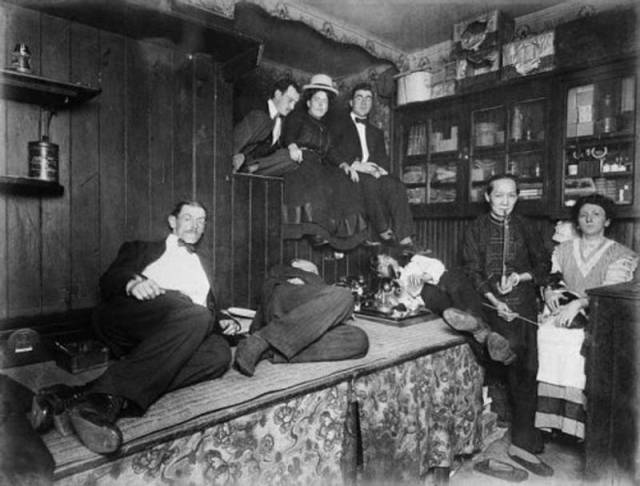 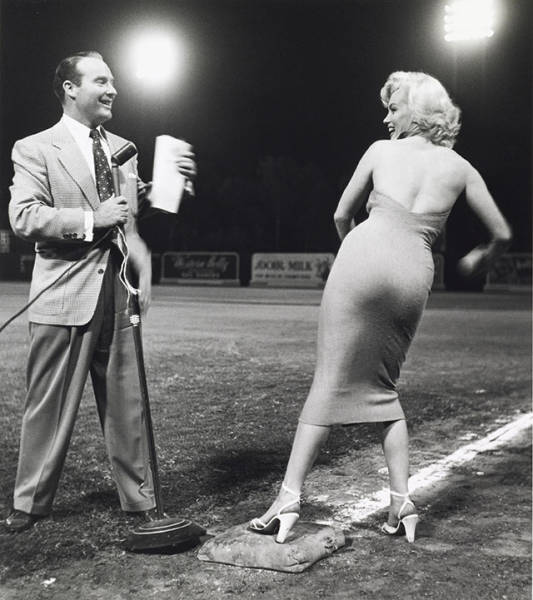 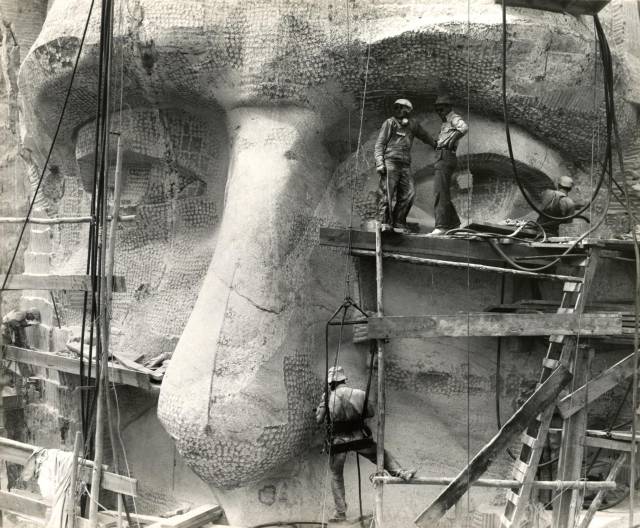 Two Armenian women pose with their rifles before going to war against the Ottomans, 1895. 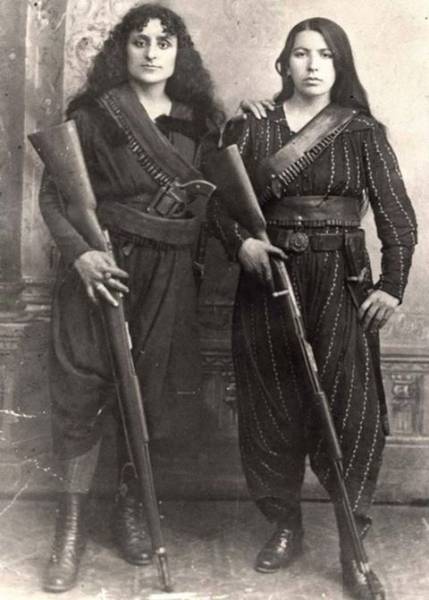 German youths studying the differences between Aryans and Jews 1943 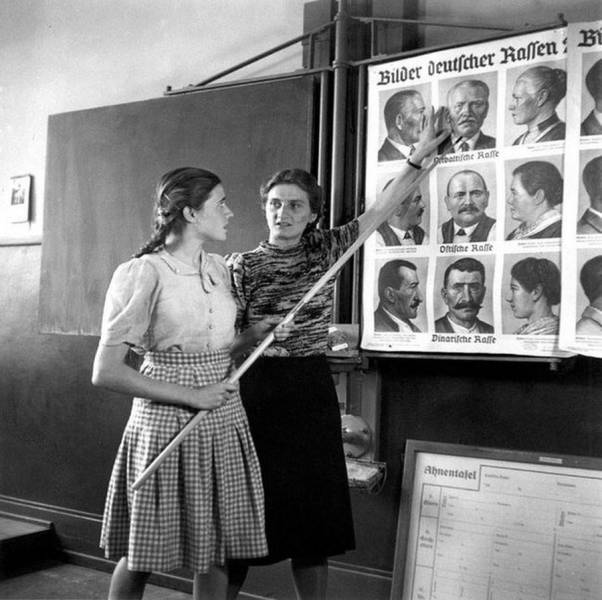 A man is having his nose measured by the Nazi police police to decide whether or not he is Jew. Hitler had a stereotype that Jewish noses are larger than Aryan noses. 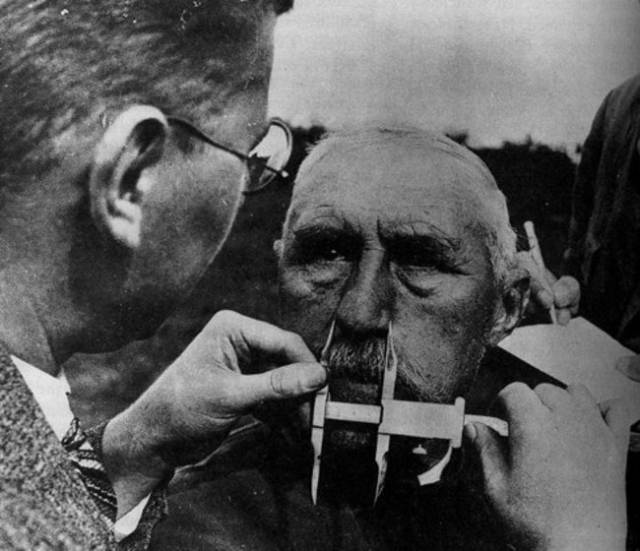 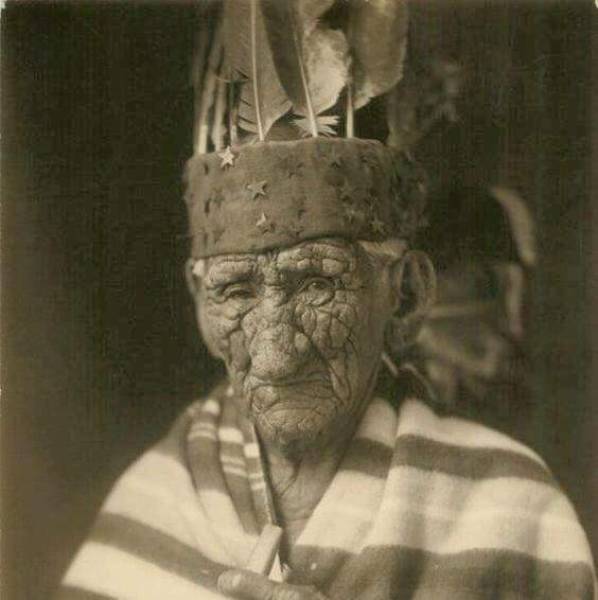 A Ghost Army trooper paints an inflatable rubber tank modelled on an M-4 Sherman. The 23rd Headquarters Special Troops, an elite force whose speciality was tactical deception, was a matter of military secrecy until its declassification in 1996.

Military deception is as old as war itself, but the idea the Allied planners came up with represented something new: a mobile, self-contained deception unit capable of staging multimedia illusions on demand. The 1,100 men in the unit were capable of simulating two full divisions—up to 30,000 men—with all the tanks and artillery that the real units might be expected to have. The illusion might discourage the enemy from exploiting a weak spot by making the site seem as if it was heavily defended, or could draw enemy troops away from where real American units were planning an attack. 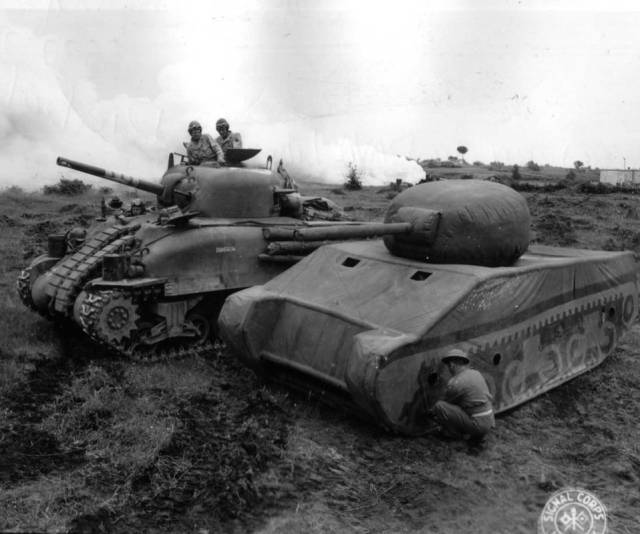 Inflatable dummy tanks and trucks set up near the Rhine River in Germany. Attention to detail was critical. Bulldozers were used to make tank tracks leading up to where the 93 lb (42 kg) inflatable dummies stood. Real artillery shells were tossed around fake guns. 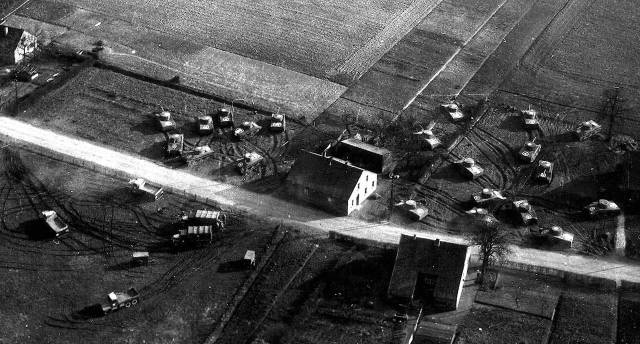 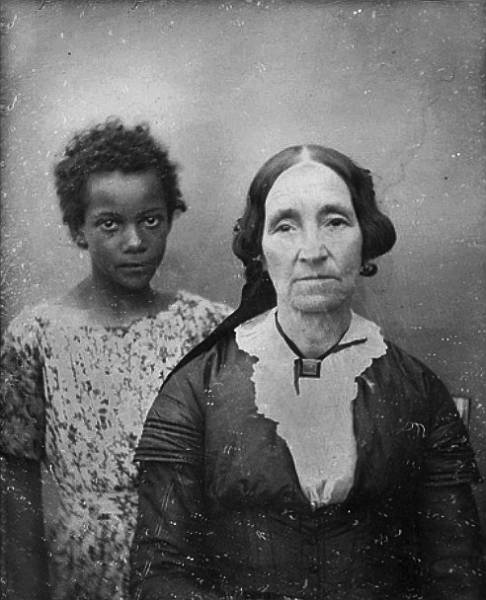 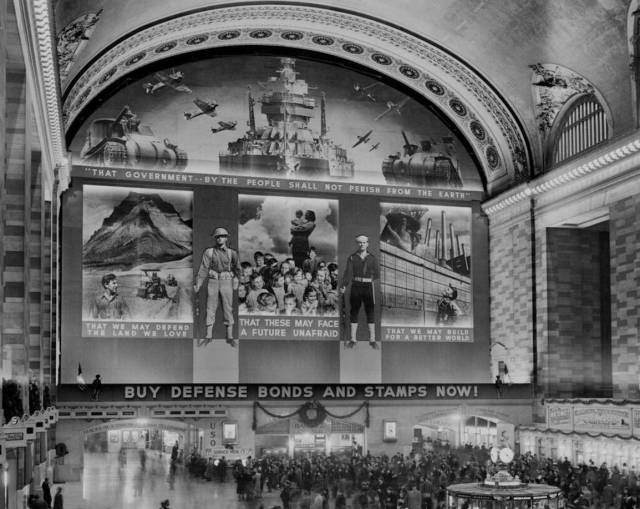 A mother and child in Hiroshima, four months after the atomic bombing. 1945 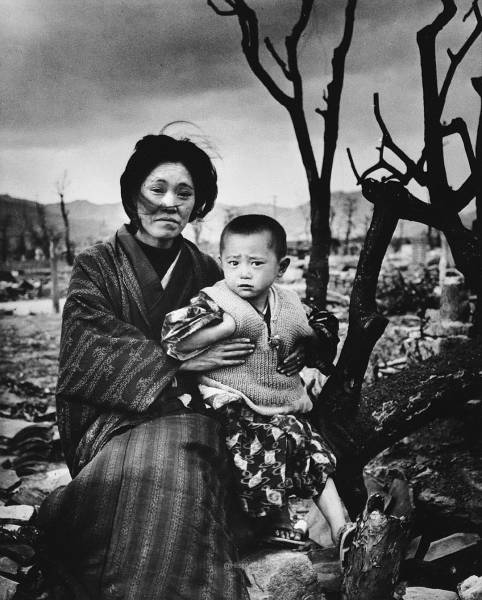 Louis Armstrong plays for his wife in front of the Sphinx by the pyramids in Giza, 1961 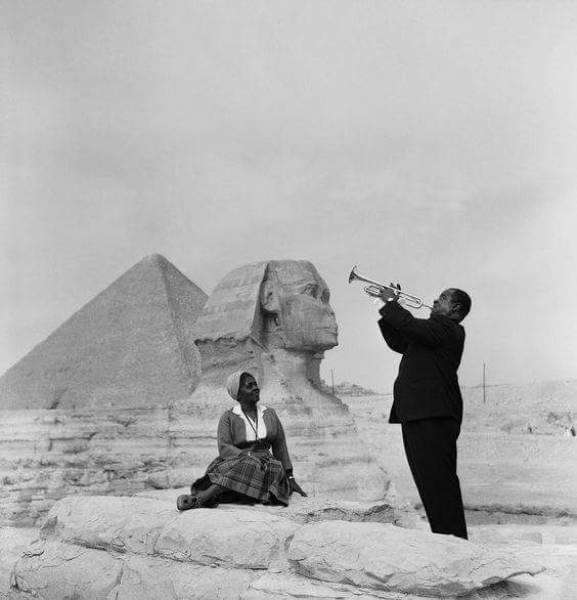 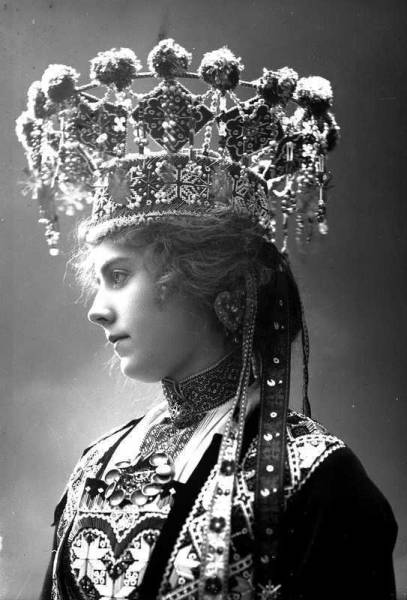 German General Anton Dostler is tied to a stake before his execution by a firing squad in the Aversa stockade. The General was convicted and sentenced to death by an American military tribunal after ordering the execution of 15 US soldiers on 26th March 1944.

General Anton Dostler was a general of the infantry in the regular German Army during World War II. In the first Allied war trial after the war, Dostler was found guilty of war crimes and executed by firing squad. He ordered and oversaw the unlawful execution of fifteen captured U.S. soldiers. The soldiers were sent behind the German lines with orders to demolish a tunnel that was being used by the German army as a supply route to the front lines. They were captured and upon learning of their mission, Dostler ordered their execution without trial. The U.S. soldiers were wearing proper military uniforms and carried no civilian or enemy clothing and were in compliance with Hague Convention to be considered non-combatants after their surrender. Under the 1907 Hague Convention on Land Warfare, it was legal to execute “spies and saboteurs” disguised in civilian clothes or enemy uniforms but excluded those who were captured in proper uniforms. Since fifteen U.S. soldiers were properly dressed in U.S. uniforms behind enemy lines and not disguised in civilian clothes or enemy uniforms, they were not to be treated as spies but prisoners of war, which Dostler violated. This order was an implementation of Hitler’s secret Commando Order of 1942, which required the immediate execution without trial of commandos and saboteurs. 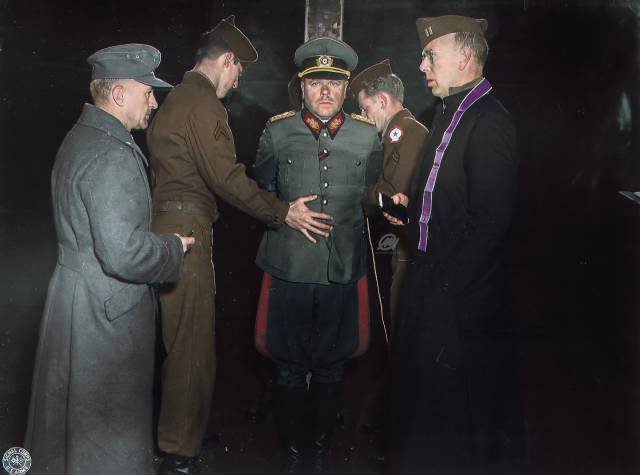 A German mortar crew in the ruins of Stalingrad. August, 1942 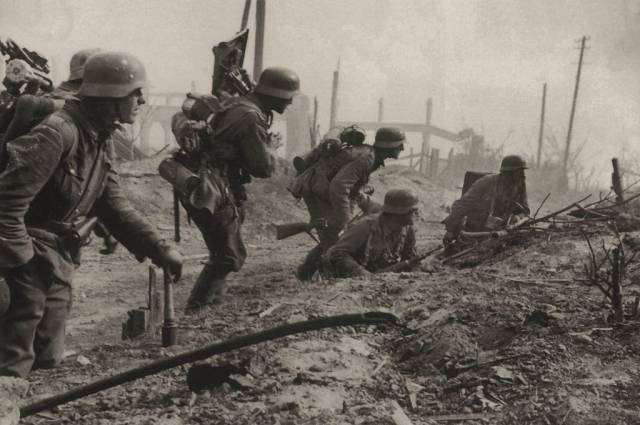 German soldier going against direct orders to help a young boy cross the newly formed Berlin Wall after being separated from his family, 1961 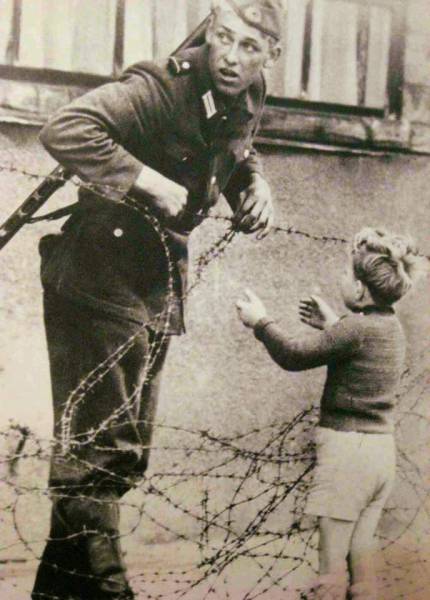 Patty Hearst Robbing the Sunset District branch of the Hibernia Bank in San Francisco at 9:40 A.M. April 15, 1974. Her and the Symbionese Liberation Army (S.L.A.) were in the bank for 4min

Patricia Hearst Shaw, is the granddaughter of American publishing magnate William Randolph Hearst. She became nationally known for events following her 1974 kidnapping while she was a 19-year-old student living in Berkeley, California. Hearst was abducted by a left-wing terrorist group known as the Symbionese Liberation Army. After being isolated and threatened with death, she became supportive of their cause, making propaganda announcements for them and taking part in illegal activities. Hearst was found 19 months after her kidnapping, by which time she was a fugitive wanted for serious crimes. She was held in custody, despite speculation that her family’s resources would prevent her spending time in jail. At her trial, the prosecution suggested that she had joined the Symbionese Liberation Army of her own volition, and sexual activities between her and SLA members had not amounted to rape. She was found guilty of bank robbery. Hearst’s sentence was commuted by President Jimmy Carter, and she was pardoned by President Bill Clinton. 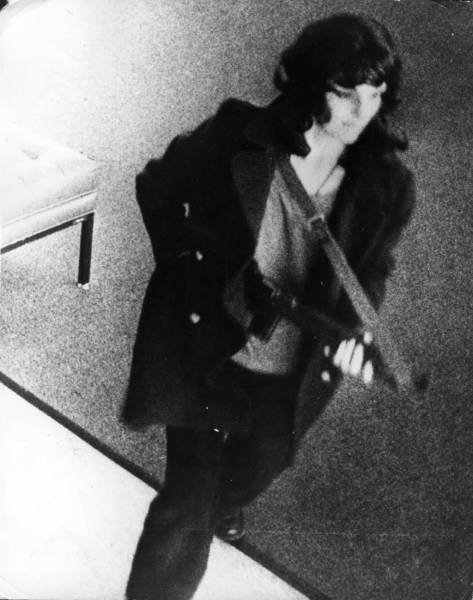 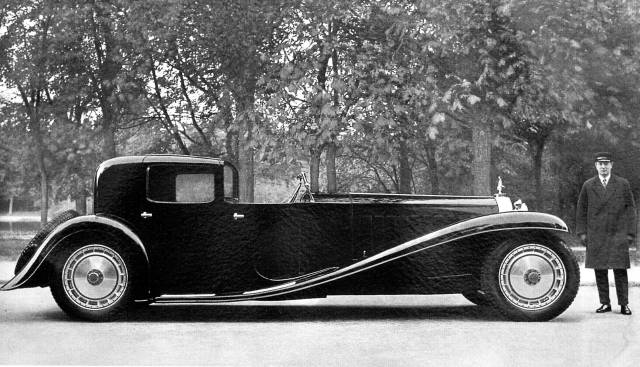 The last picture of all four Beatles together. This photo was taken August 22, 1969 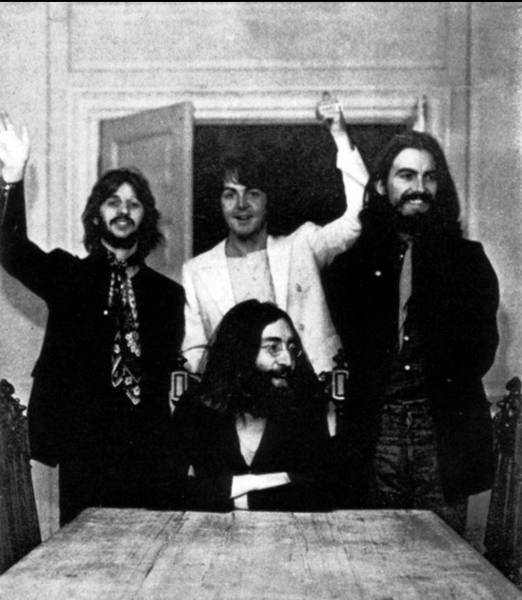 This is the first photo of them. Coincidentally also August 22, 1962 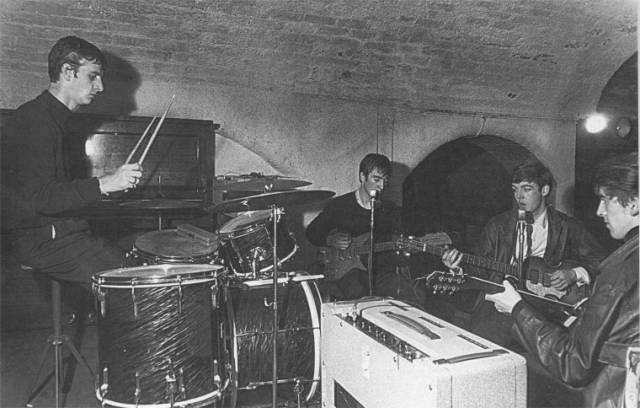 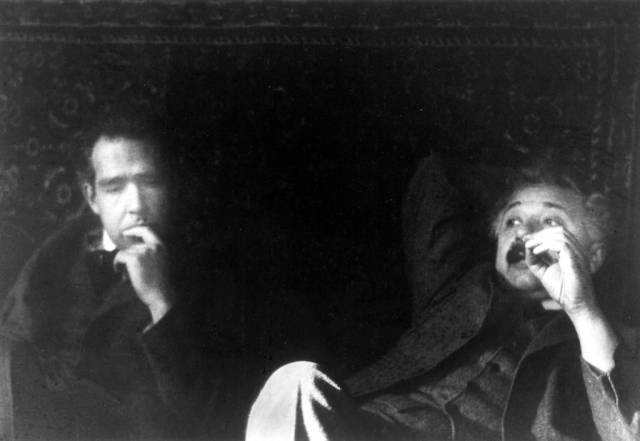