You Can Access Narnia From Lots Of Hidden Places! (25 pics)

If you’re needing creative ways to enter various rooms, we’ve found a unique way to do it. This house creatively designed their staircase to secretly raise so they can access their storage. 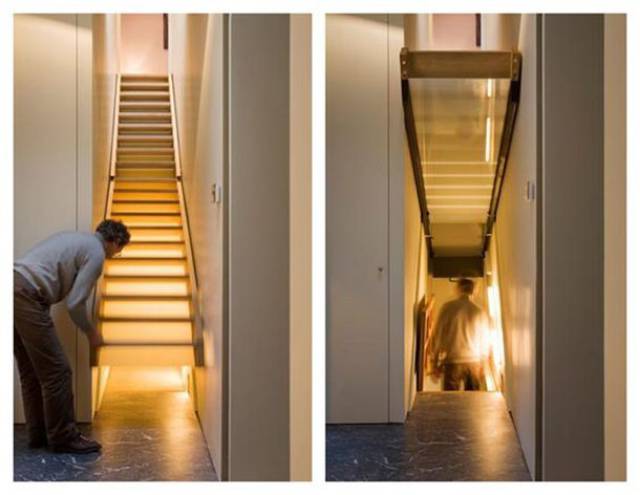 Behind the stone wall

A hidden room behind a stone wall in medieval architecture might thrill King Arthur enthusiasts or terrify party guests. Either way, it might be a good place to store junk lying around. 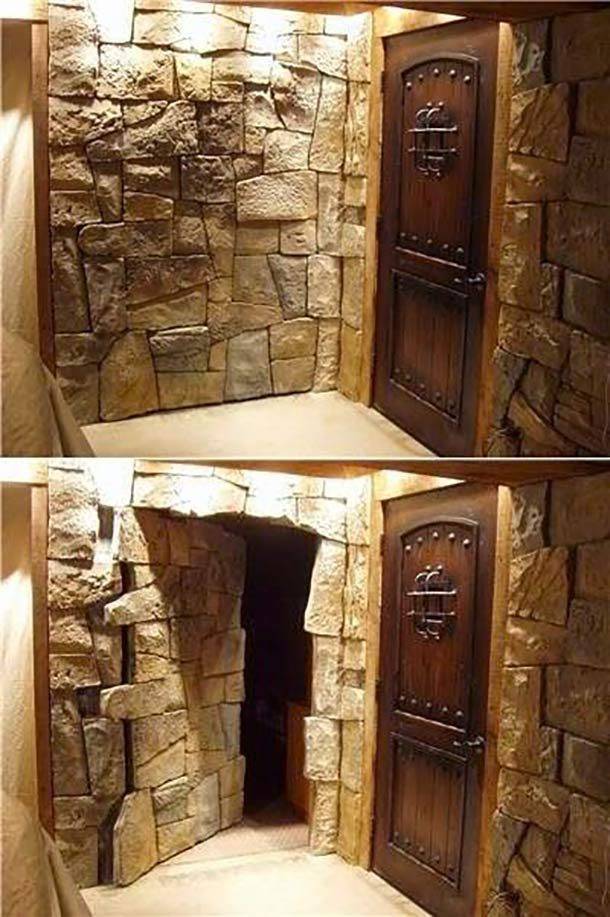 Who hasn’t wanted a secret door behind a library bookshelf? They’re in all the best spy movies, and they’d make a pretty great getaway if your family is driving you crazy. This hidden room is a must. 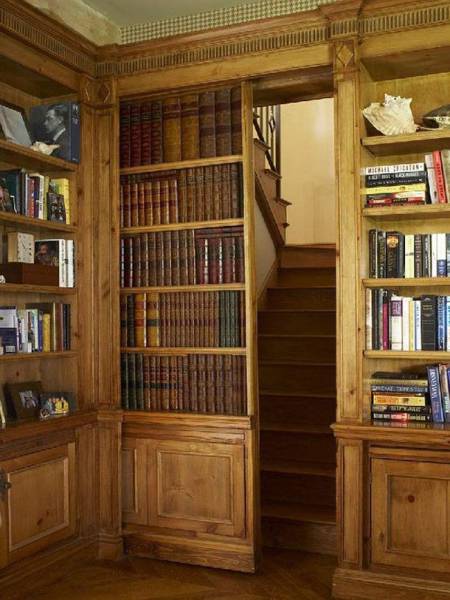 Garden lovers and fans of the movie ‘The Secret Garden’ will fall in love with this hidden room. Built within the wall of the garden, the beautiful flowers aren’t the only treasure here. 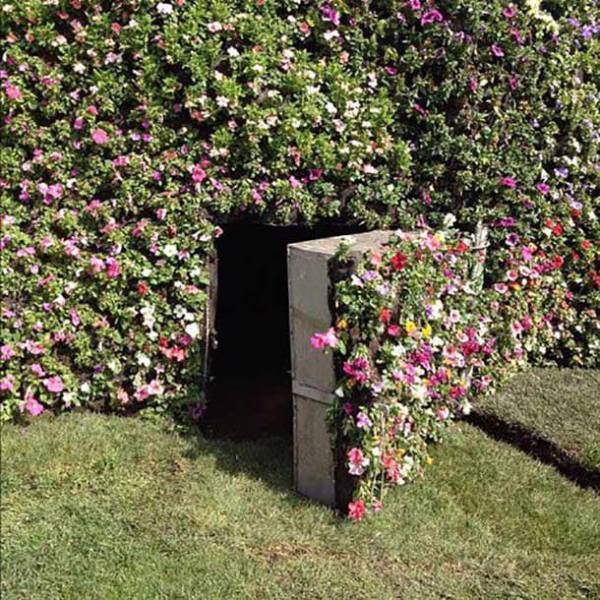 The apple of every chef’s eye, the hidden door that leads to a massive pantry can only be described as an epic culinary masterpiece. 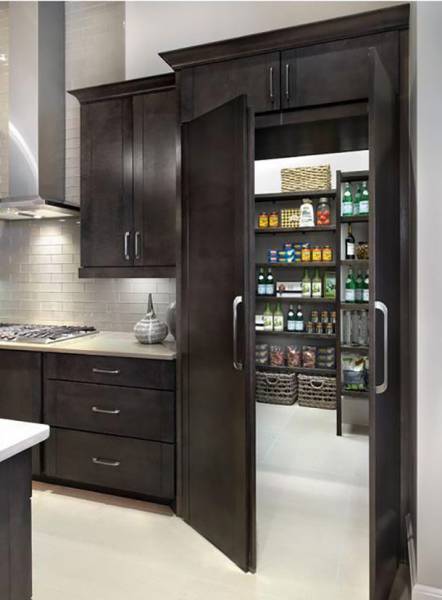 Every house needs a room where someone can put a magical orphan child that they don’t want, like Harry Potter, and this house is leading the way. Or, they just found a great way to make a play room. 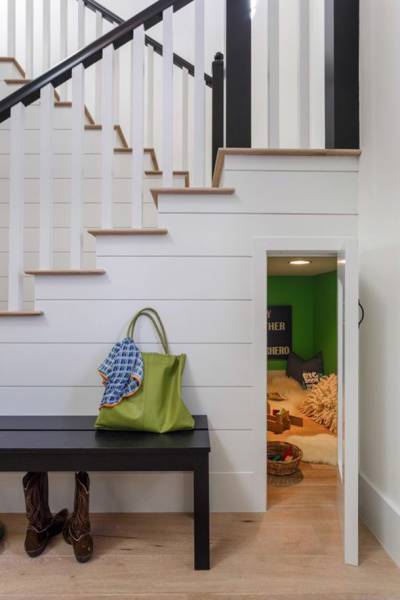 A Wardrobe Leading to Narnia

Narnia fans everywhere will swoon after this hidden room. After finding an old wardrobe, this couple figured out a way to make it the doorway into their child’s play room. 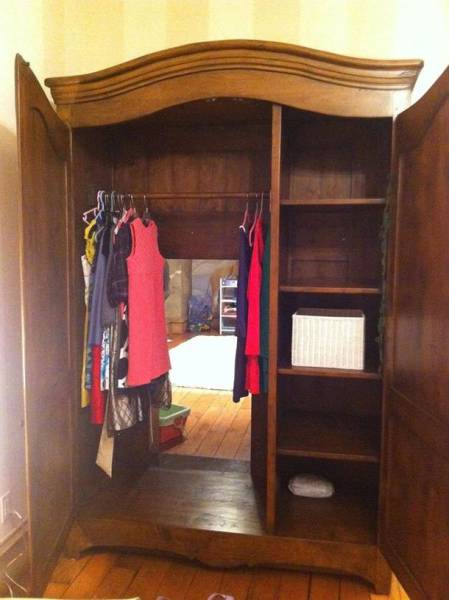 Winos take notice, someone designed an amazing wood floor hatch into a cellar full of wine. The classy nature of this design can’t be overstated and now we’re super jealous. 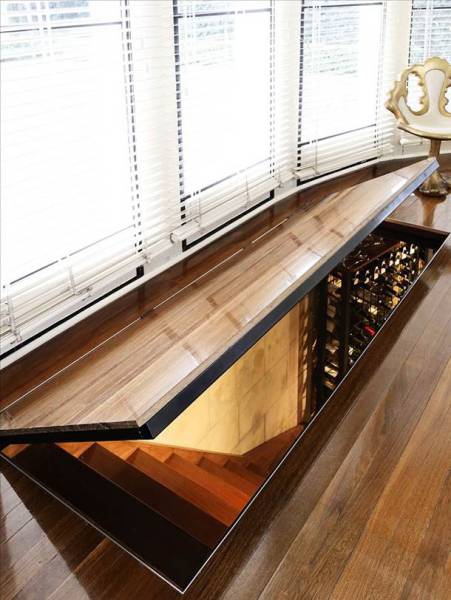 Bookworms would squeal at seeing a library like this, especially with the ladder and the secret hatch at the top. It’s like a hidden paradise where all the books in the world can be read in peace and silence. Cue relaxed sigh. 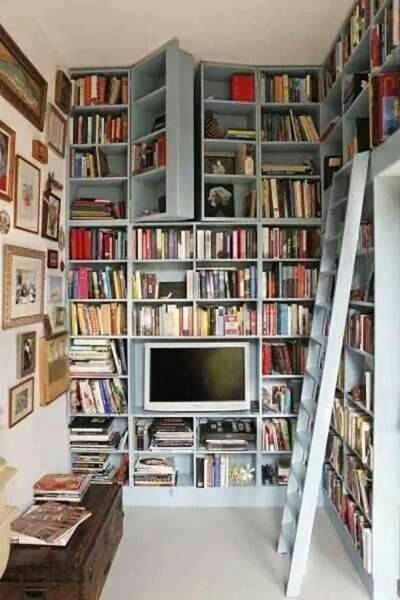 Who needs door knobs when there are super secret revolving doors? Plus, playing tricks on guests and vanishing without a trace would make for a great story. 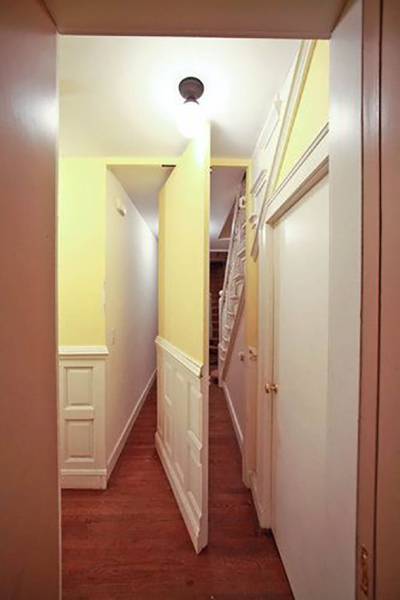 Let’s be honest, sometimes sneaking away during a dinner party and catching a few z’s in a super secret bedroom is exactly what we need. Also, we’re loving the ancient roll away design. Bonus points. 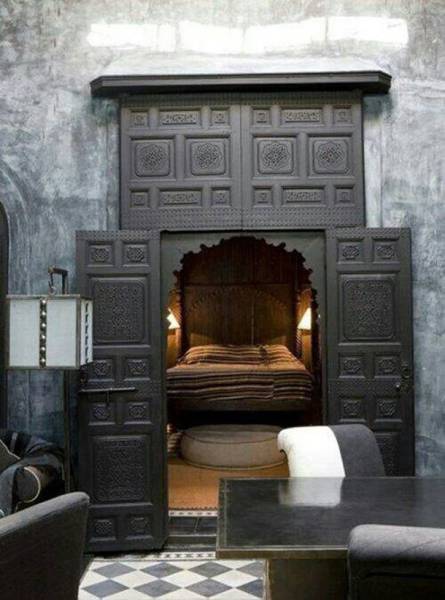 We’re all about cozy fireplaces, but a fireplace that doubles as a hidden room is way better. A million ideas of how to use this thing just came to mind. It’s time to furiously scribble down a future wish list. 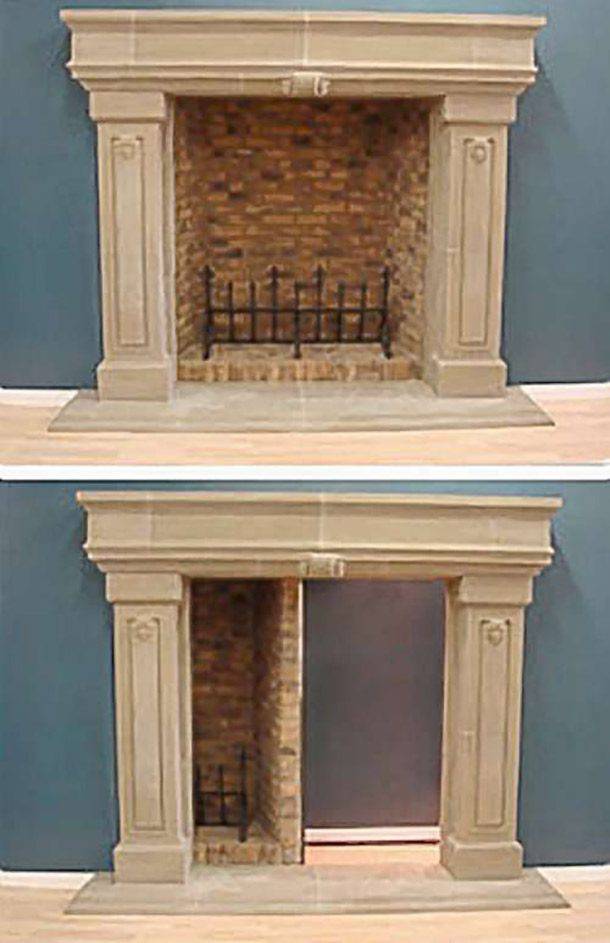 This bookshelf doorway isn’t fooling anyone. However, it looks like a cheap way to DIY a hidden room, and helping out the little guy is always a good thing. 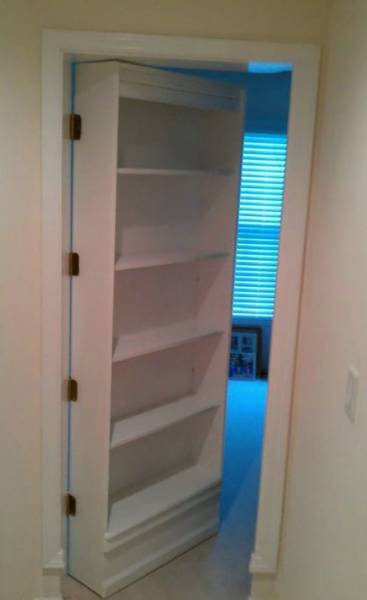 While it looks like a perfectly good hidden room, not sure we would ever want to go up there because, frankly, it’s creepy. On the other hand, our curiosity is peaked. If anything, it’s a good reminder to ask the realtor if there are any hidden rooms when purchasing an old home. 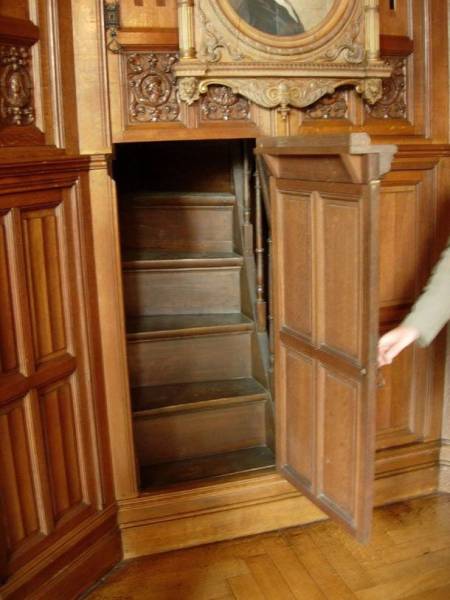 A hidden bed doesn’t serve much of a purpose other than maybe freeing up some dance space, but it’s still pretty cool. And, honestly, whoever sleeps on it must be constantly in the fetal position.

Every writer dreams of having a place they can whisk away to and get hours and hours of writing done. This hidden staircase up to a writer’s den is exactly the solution. Though, they might never want to return to reality. 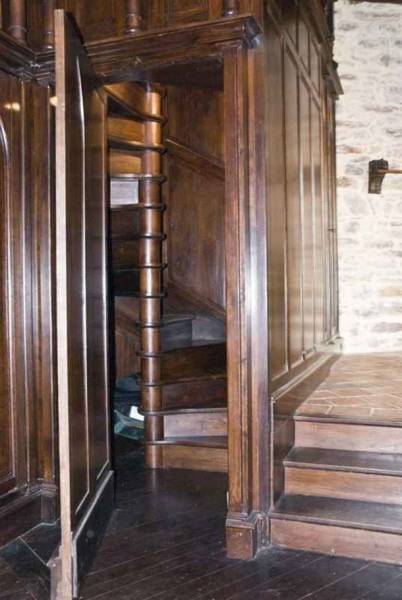 A secret hiding spot might come in handy during an epic game of hide-and-seek or if you’re running for your life. Either way, it sounds like a life saver. 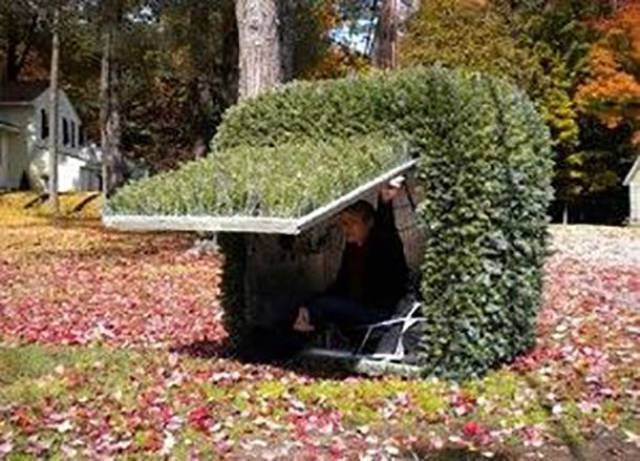 Just when we thought the wine hatch couldn’t be topped, this spiral staircase full of wine into the great unknown went and did it. 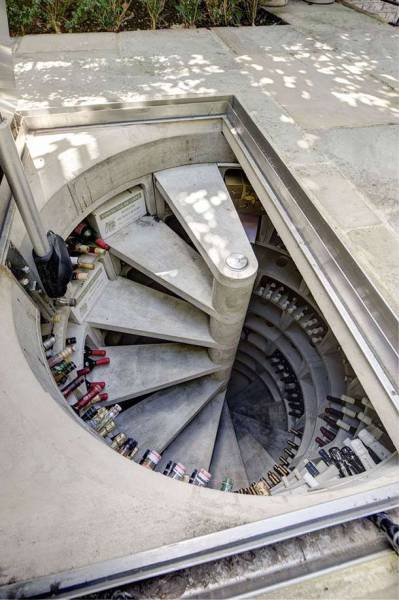 Behind the Picture Frame

We’ve all seen this one multiple times in movies, but usually, there’s a safe behind the picture. It’s hard to imagine what purpose a crawl space like this would serve but to each their own. 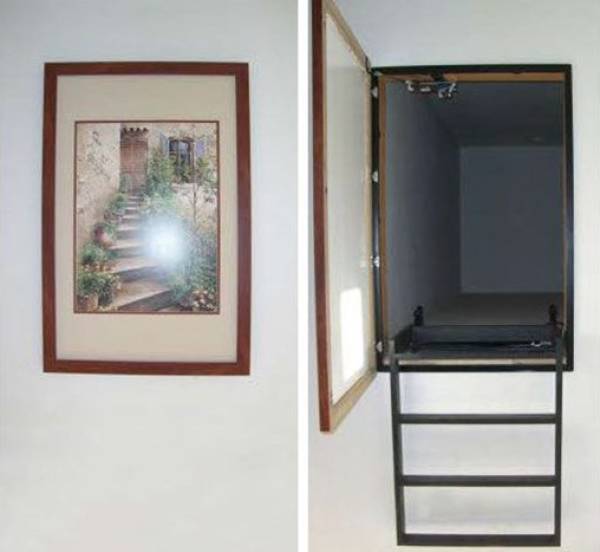 Not in a million years would we have guessed a secret room was behind that wall. It blends in so nicely. Also, on closer inspection, the secret room looks like a jail. We’re going to hope that’s not what it is.

Whoever designed this secret sliding gate, keeping dogs and children out of the kitchen, should get an award. Parents and dog-owners everywhere rejoice! 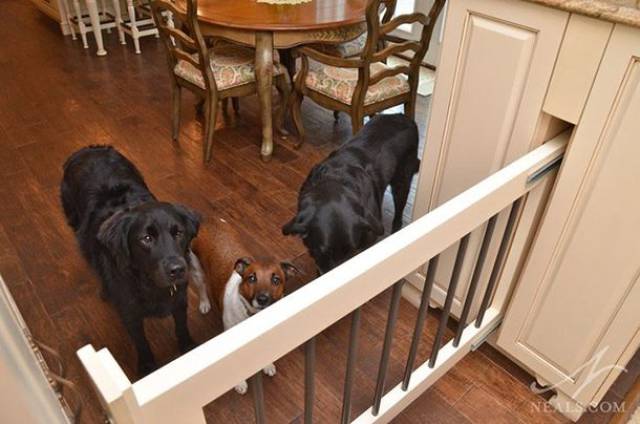 For those that might require a little extra peace of mind, this hidden safe room in the kitchen might do the trick. 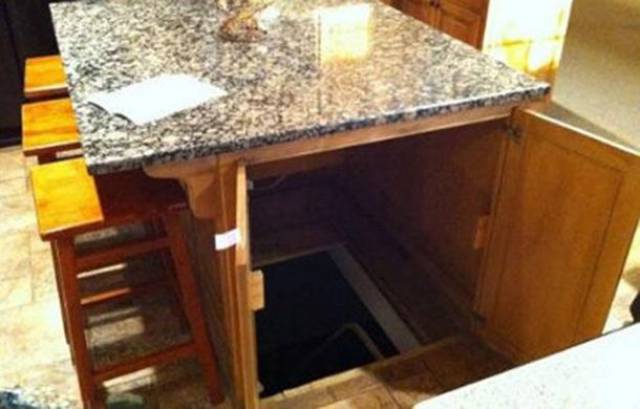 This table turned gun display looks like it came straight out of a James Bond movie. We’re not sure why anyone would need this, but it might come in handy on the off chance there’s a zombie apocalypse. 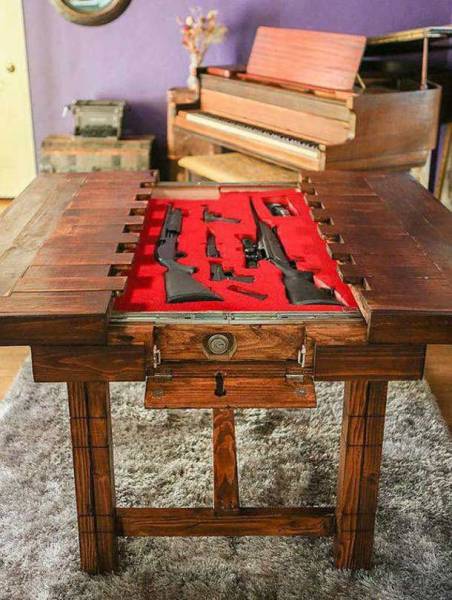 Every kid in the world would love to have this in their room. It literally looks like a tree house. Here’s hoping whatever is up that ladder is a whole lot of fun. 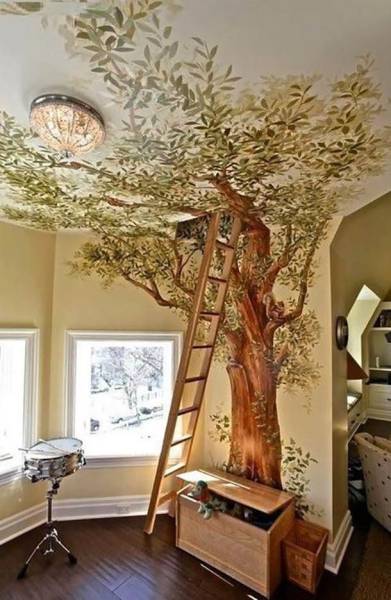 If there’s one thing every guy in the world wants, it’s a secret garage taking them straight to their own Batcave. However, we’d also settle for this secret car storage container, too. 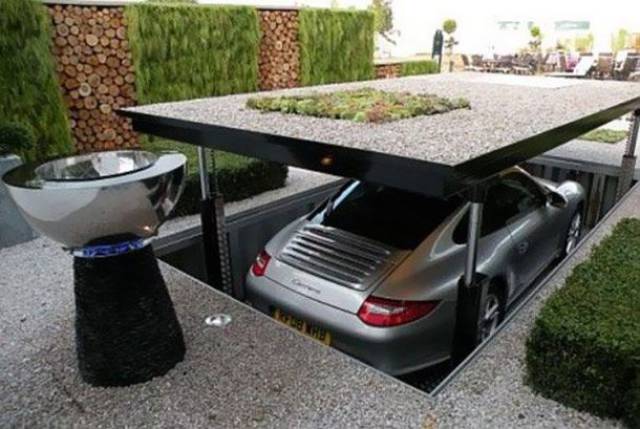