Daenerys is heading for Westeros with new allies by her side. 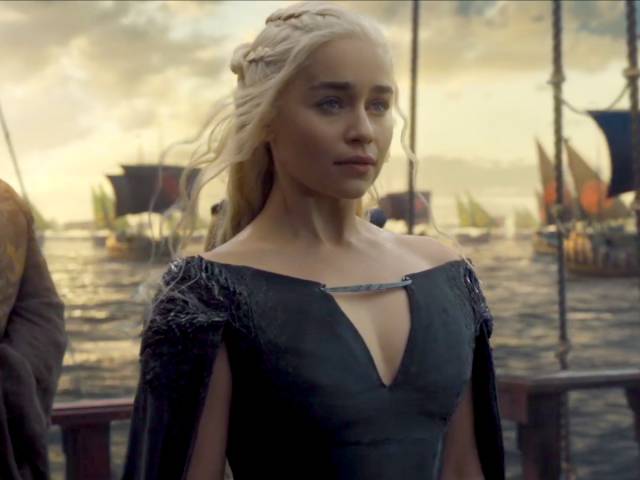 After defeating the slave masters of Yunkai, Astapor, and Volantis once more, Daenerys left the city of Meereen in the care of Daario and his sellsword company the Second Sons.

Daenerys broke things off with Daario, but confessed to Tyrion that she didn't feel to sad about it. She's just eager to finally arrive in the Seven Kingdoms and begin her conquest. 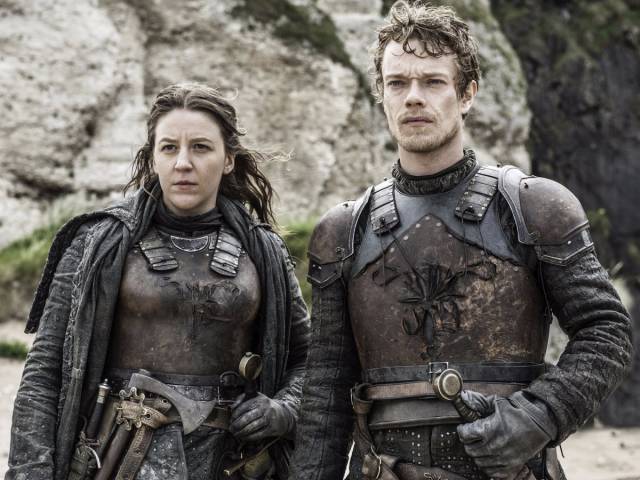 After their Uncle Euron murdered their father and stole the Salt Throne for himself, Yara and Theon fled the Iron Islands with a fleet of their fastest ships. They landed in Meereen and agreed to help Daenerys conquer Westeros, as long as Yara gets to keep the Iron Islands in the end.

This left Euron on the Iron Islands, angry and eager to build new ships and come after his niece and nephew.

Daenerys also teamed up with Ellaria and the Sand Snakes of Dorne. 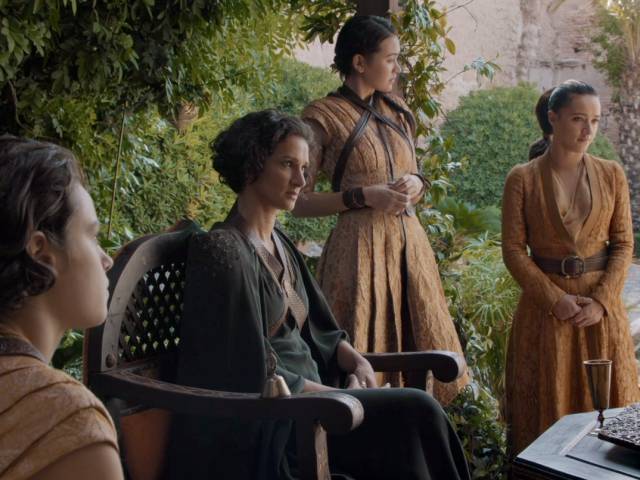 In the final shot of season six, you could make out sails showing Ellaria's Dornish sigil (the sun spear) and Olenna Tyrell's golden rose sigil. This means there was a time jump between when we saw Varys in Dorne with Ellaria Sand and when Daenerys set sail for Westeros.

Ellaria and her daughters (Obara, Tyene, and Nymeria) killed the leaders of Dorne on season six. Doran Martell and his son Trystane were murdered, and Ellaria said, "No man will ever rule Dorne again." Could this decision come back to haunt her?

Olenna Tyrell also teamed up with Ellaria, Daenerys, and Varys. 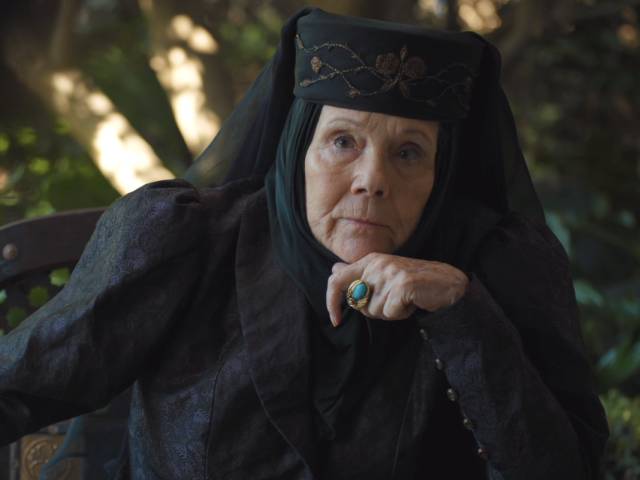 The sails of Highgarden (House Tyrell's castle) were also seen among Daenerys' fleet on the finale, which means Olenna has turned over all of House Tyrell's remaining resources to help the Mother of Dragons.

Olenna is seeking vengeance against Cersei Lannister now that her entire family was murdered.

Which brings us to Cersei, who blew up the Sept of Baelor while Margaery Tyrell, the High Sparrow, and dozens of others were inside. 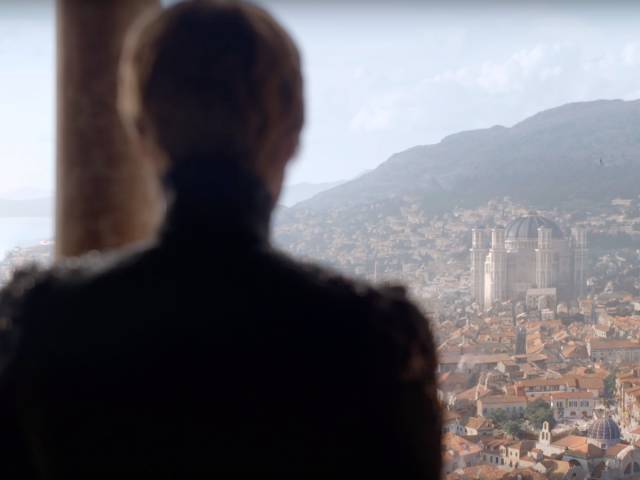 Cersei had her accomplice and advisor, Qyburn, use caches of wildfire to blow up the Sept of Baelor at an opportune time.

While Cersei was blowing up the Sept, Qyburn had his new "little birds" kill Grand Maester Pycelle. 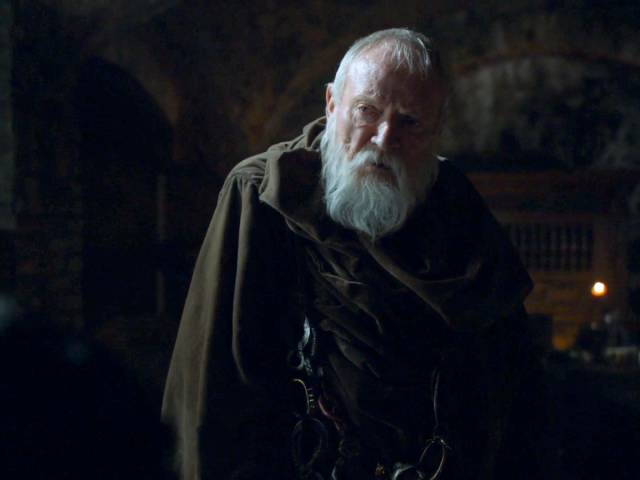 Varys always used to refer to his "little birds," and on season six we saw as Qyburn finally met them and brought them under his wing. The birds are really just poor children who live in King's Landing.

On the season six finale, we watched as the little birds stabbed Maester Pycelle to death while Qyburn watched. 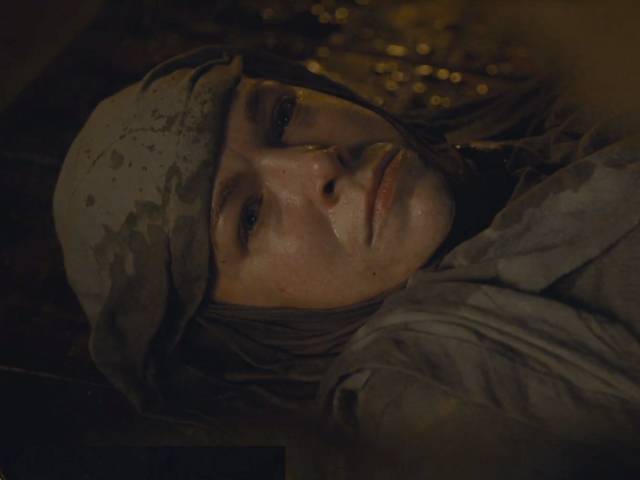 Tommen was devastated to see Margaery killed, and jumped out of the window of his tower — leaving Cersei completely childless.

His death might have been avoided if Cersei hadn't been busy waterboarding Septa Unella with red wine. Cersei left the septa strapped to a table in a dungeon with the Mountain, and promised her she wouldn't be dying any time soon. We don't know exactly what the Mountain is doing to Septa Unella, but maybe that's best left unexplained.

Jaime returned from his time in the Riverlands to find King's Landing burning and Cersei on the throne. 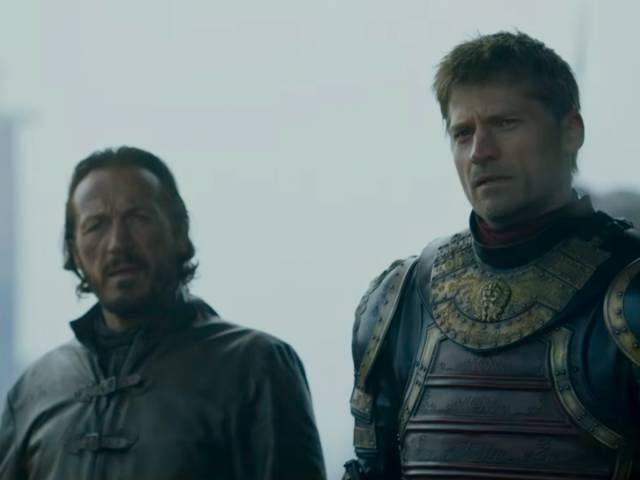 Jaime had been at Riverrun and the Twins, helping Walder Frey take back the castle from the Blackfish. While there, Jaime seemed to bristle at the idea that his own dishonorable past was being compared to Walder Frey's — the man who orchestrated the horrific Red Wedding on season three that wiped out Robb, Catelyn Stark, and their army.

When he finally returned to King's Landing, he saw the burning sept and Cersei seated on the Iron Throne. Jaime's expression looked both angry and almost fearful when he realized his last son, Tommen, must be dead.

Meanwhile in the north, Jon and Sansa have retaken Winterfell and destroyed the Boltons once and for all. 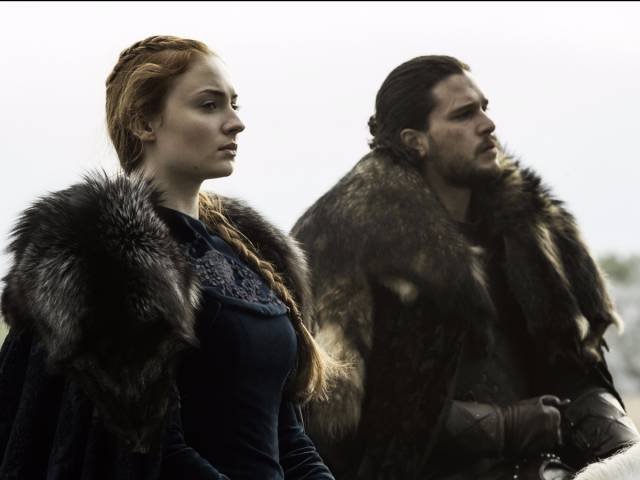 After the epic Battle of the Bastards, Jon and Sansa are ruling Winterfell in the Stark name once more. Jon nearly lost the battle, but Sansa saved the day when she arrived with Petyr "Littlefinger" Baelish and the Knights of the Vale.

Afterwards, Sansa confessed that she should have told Jon about her backup army. Jon emphasized that they need to trust each other.

Later in the episode, though, Jon was crowned King in the North while Sansa and Littlefinger exchanged a worrying glance. 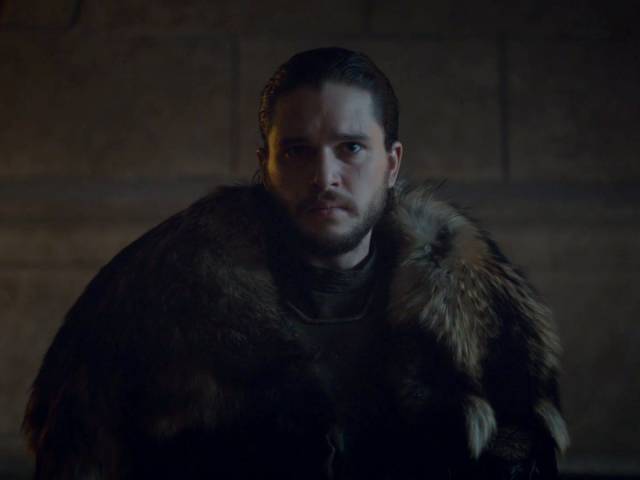 Littlefinger told Sansa that his goal was to be on the Iron Throne with her by his side and told her that she shouldn't let Jon rule Winterfell since he wasn't a trueborn Stark.

Sansa rejected his advances, calling it a "pretty picture," but she seemed to be considering his words more when the northern lords declared Jon the King in the North.

We also finally learned who Jon's mother is — Lyanna Stark. 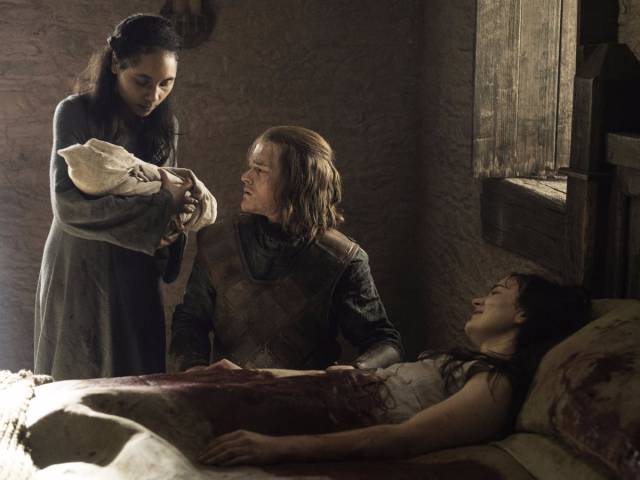 Bran was able to see into the past and watched as a younger Ned Stark found his sister, Lyanna, laying in a bed of blood with a newborn baby. Lyanna gave the baby (Jon) to Ned and asked him to protect him.

After the finale aired, HBO released an infographic naming Rhaegar Targaryen as Jon's father. This means Jon is a descendant of the two great houses of Westeros, the Starks and the Targaryens. It also means that he's technically Sansa's cousin and the nephew of Daenerys.

So Bran knows who Jon's mother is, but will Jon find out for himself?

Bran and Meera are very close to Castle Black, thanks to the undead Uncle Benjen. 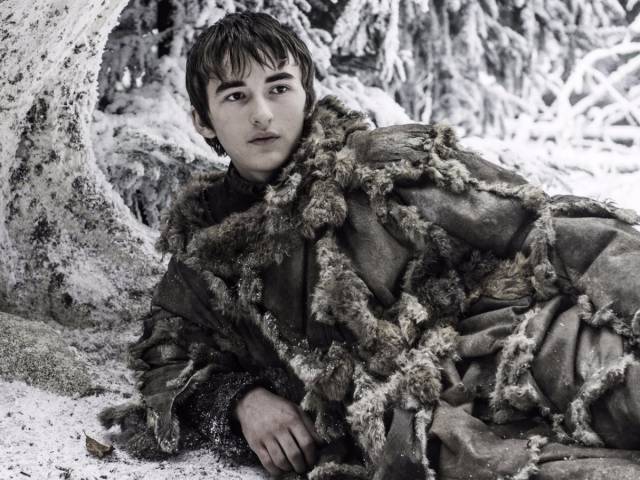 Benjen, who was revealed on season six to be "alive" thanks to the Children of the Forest, told Bran that he cannot pass beneath the Wall due to the magic keeping him in a state of undead/dead. But he told Bran he would continue to fight beyond the Wall in whatever way he could.

Bran and Meera are trying to get south to warn people about the Night King and the coming threat. Now that the Three-Eyed Raven is dead, Bran is the new Three-Eyed Raven. 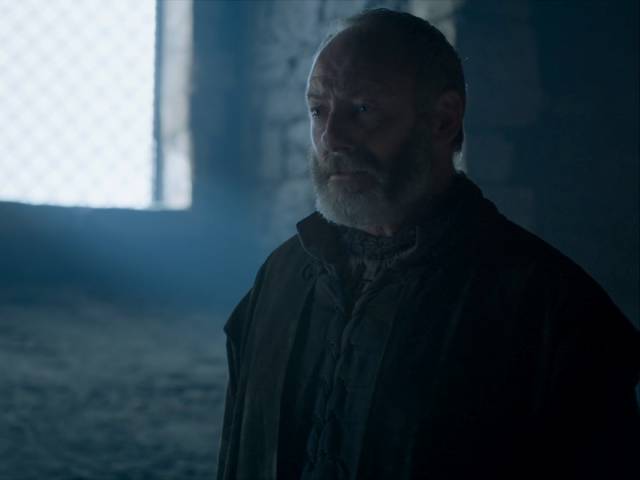 With Jon Snow as a witness, Davos forced Melisandre to confess to burning Shireen Baratheon at the stake. Davos asked Jon to execute the Red Woman, but since he owed her his life Jon simply banished Melisandre instead.

Jon told Melisandre to ride south, and warned her that if she ever returned to Winterfell she would be hanged as a murderer.

Those were all the intertwining storylines you should keep in mind. Now for some odds and ends, starting with Sam and Gilly. Sam, Gilly, and baby Sam all arrived in Oldtown on the season six finale. The Citadel is located in Oldtown, which is where Sam is trying to be granted access for maester-training. The only hitch is that women and children aren't allowed in the Citadel, so Gilly and baby Sam will need to find somewhere else to live.

Don't forget that Sam and company stopped at Horn Hill, House Tarly's castle, on their way. There they met Sam's cruel father, who threatened to kill Sam for bringing a wildling to his home. Sam and Gilly left in the middle of the night, and Sam stole his father's Valyrian steel sword Heartsbane on the way out.

Brienne of Tarth and Podrick parted ways with Jaime and company in Riverrun. We last saw them rowing a boat back north. 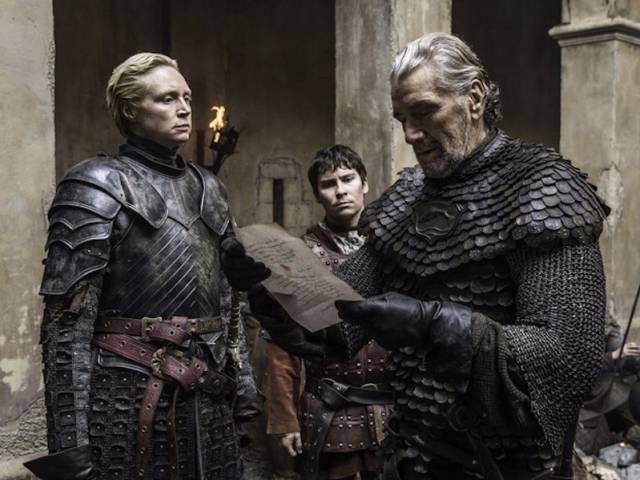 After failing to convince the Blackfish to ride north and help in the battle for Winterfell, Brienne and Podrick escaped via boat and headed back north.

Kinvara is a high priestess of the Lord of Light who believes Daenerys is a prophesied hero meant to fight the White Walkers. 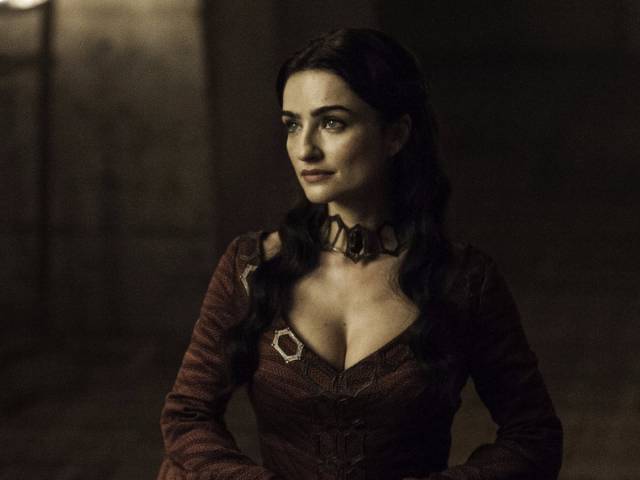 Tyrion invited Kinvara to Meereen during the time when Daenerys was still missing. Kinvara arrived, and promptly disturbed Varys by revealing that she knows nearly everything about his past. She told Tyrion and Varys that Daenerys was chosen by the Lord of Light, R'hllor, to lead the fight against the coming darkness (White Walkers).

She deployed other red priests and priestesses to spread word of Daenerys' special role, but we have a sneaking suspicion that she'll return. Personally, we'd love to see her and Melisandre meet face to face.

After discovering that Jorah has greyscale, Daenerys sent him away to find the cure. Greyscale is a disease, which is left untreated can infect a person's entire body and drive them to madness. Jorah contracted the disease on season five and Daenerys finally found out after she had decided to trust him again.

Daenerys banished Jorah once more, but this time with good intent. She ordered him to go find the cure for his greyscale and return to her in Westeros to be by her side once again.

Arya is back in Westeros and probably working through her kill list once again. 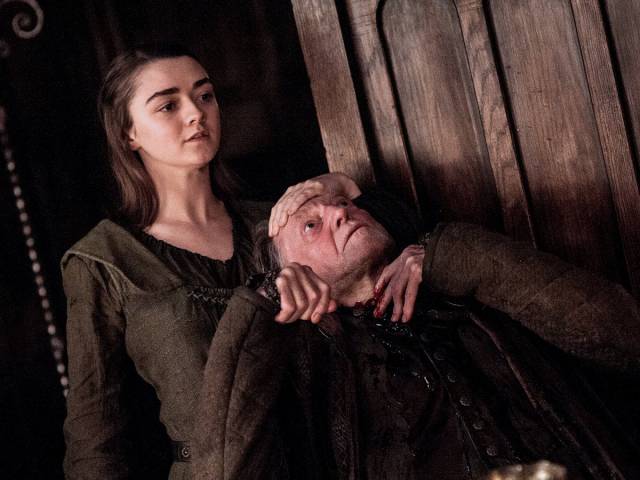 On the season six finale, Arya disguised herself as a servant girl (using Faceless Man magic) and killed Walder Frey. But before murdering him, she killed his two sons and had them baked into meat pies that were then fed to Walder.

So what is her next move? The remaining people on her list, Cersei Lannister and the Mountain, are south. But maybe she'll hear that Jon and Sansa are back north and ride for Winterfell?

Also last we heard, Edmure Tully (the brother of Catelyn Tully and lord of Riverrun) was being held prisoner at the Twins. What will come of him?

The Hound has teamed up with Beric Dondarrion and Thoros of Myr. 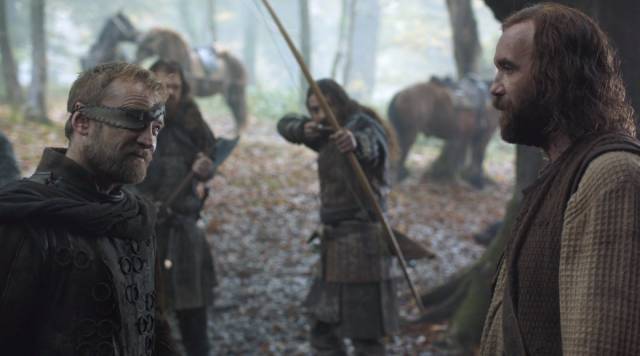 After trying to find peace with Brother Ray, played by Ian McShane, and the villagers building a sept, everything went bad for Sandor Clegane when some rogue men from the Brotherhood without Banners killed all of his new friends.

After finding Beric Dondarrion and Thoros of Myr again (and helping them hang the rogue Brotherhood men), the Hound is likely going to stick with them. Beric told the Hound that his fighting skills will be needed in the fight against darkness, alluding to the coming White Walker army in the north.

Finally, there's the Iron Bank. We haven't heard about the Iron Bank since season five, but they're bound to turn up again. 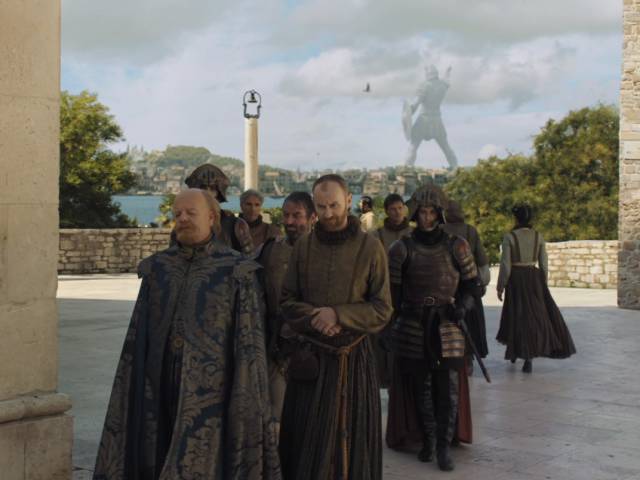 On season five, the Iron Bank of Braavos called upon the crown to pay 10% of its enormous debt. Cersei had Mace Tyrell visit Braavos to negotiate with Tycho Nestoris (the leader of the Iron Bank). We don't know what came of those negotiations, but we do know that the crown is bankrupt and only has enough cash to pay 5% of its debts.

So expect to see the Iron Bank calling upon Cersei once more and issuing potentially deadly retribution if she doesn't cough up what is owed.