This Poker Player Has Earned Half A Million Dollars… By Losing Two Thirds Of His Fat In Half A Year! (5 pics + 1 gif)

Walter Fisher was a pro poker player who had his ups and downs. The 36-year-old New Yorker went on a hot streak run from February 2016 through to June 2016, where he turned 2 grand into $97,000 at the blackjack table. But, unfortunately, soon he found himself $100,000 in debt and 50 pounds heavier. That’s when he made a $600 thousand bet with a fellow gambler that Walter won’t be able to reduce his body fat to 10% in six months. And then he started… 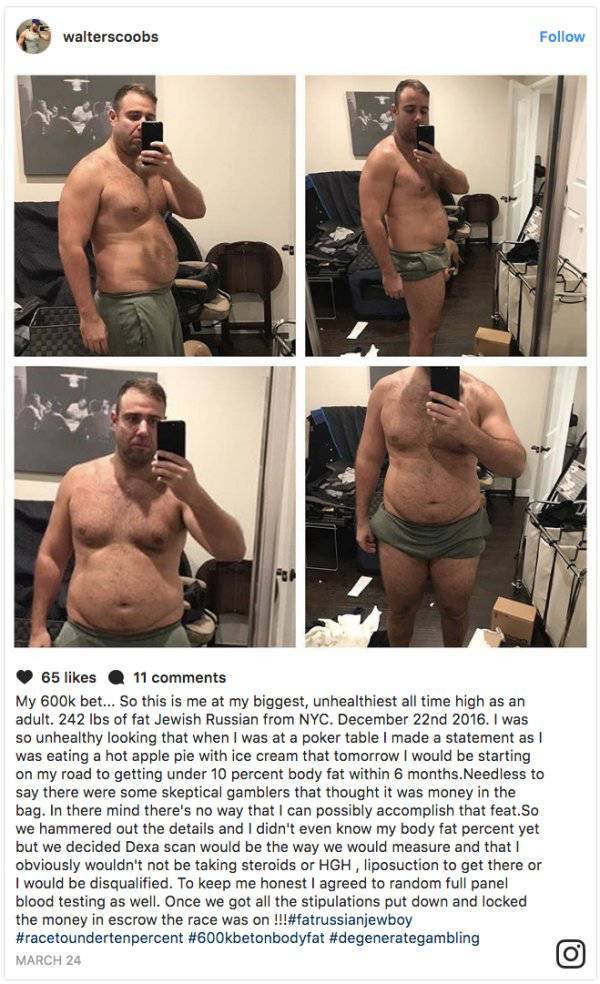 Ballooning up to 242 pounds, and in debt, Walter was in a tailspin scenario. “I was broke, big and isolated. People dream of what I had accomplished, and I lost control,” he told The New York Post. 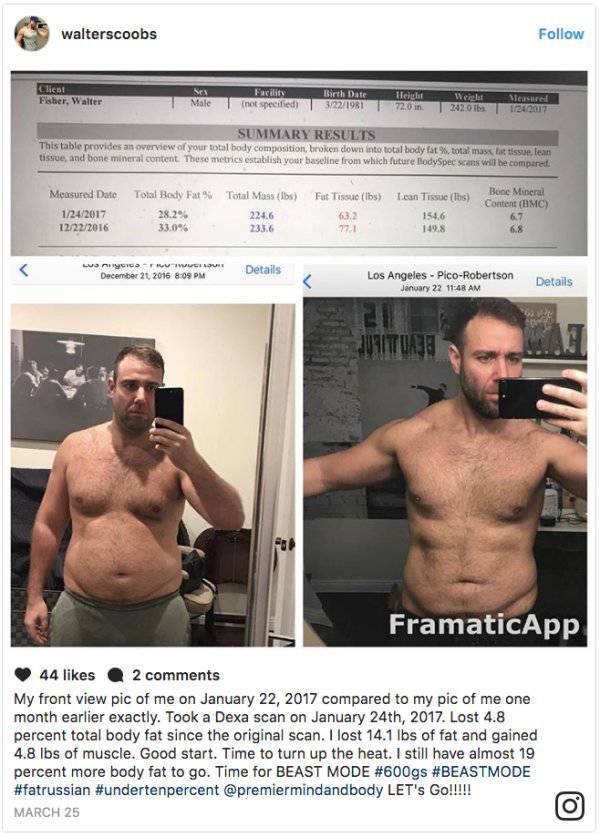 Walter explained, “I ate oatmeal and egg whites for breakfast. I soon put in ten hours a day, with five hours of cardio. I drank amino acids and glutamine to keep my muscles from breaking down.“ 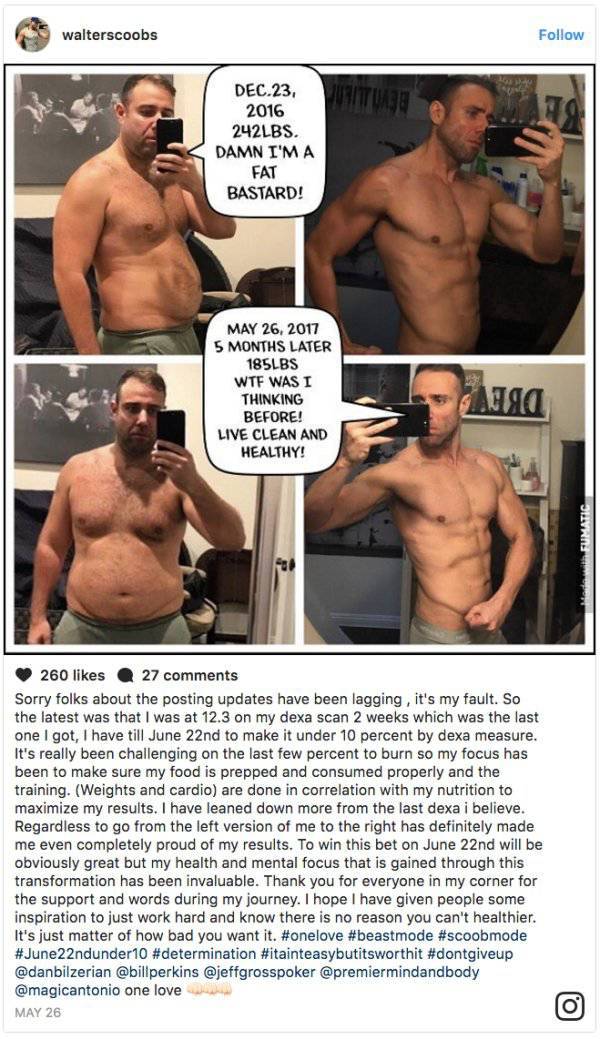 Chris continued to drill Walter daily stating “I had him swinging with a weighted hammer; that pushed his heart rate up while working his core. There was boxing, workouts with a medicine ball, cycling, rowing, weights.”

After continually revamping his diet and intensifying his daily workouts, on June 22, 2017, the day the bet concluded, the results were announced…

Walter was not down to only 10% body fat, actually, he only retained 8.8 percent instead. In only 6 months Walter had gone from 242 lbs. all the way down to a chiseled 175 lbs. 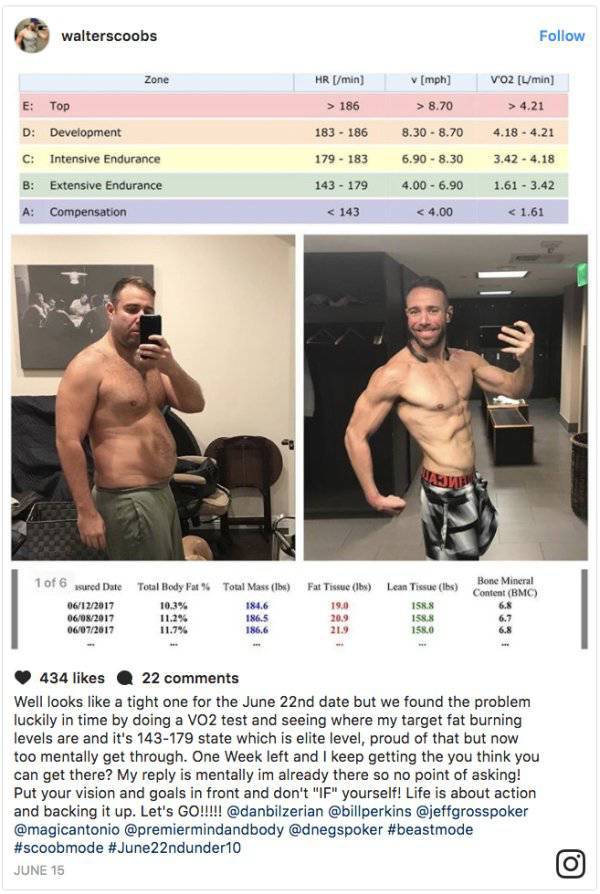 The once fallen poker player had netted roughly $7,000 for every pound he lost.

Walter concluded, “To have gone from an absolute low to where I am now is an achievement and a transformation.”

“A lot of people talk big games — and 99 per cent of them would not be able to do what I did, even with the money as an incentive — but I backed it up. I backed it up and it makes me feel like there is absolutely nothing I can’t do.” 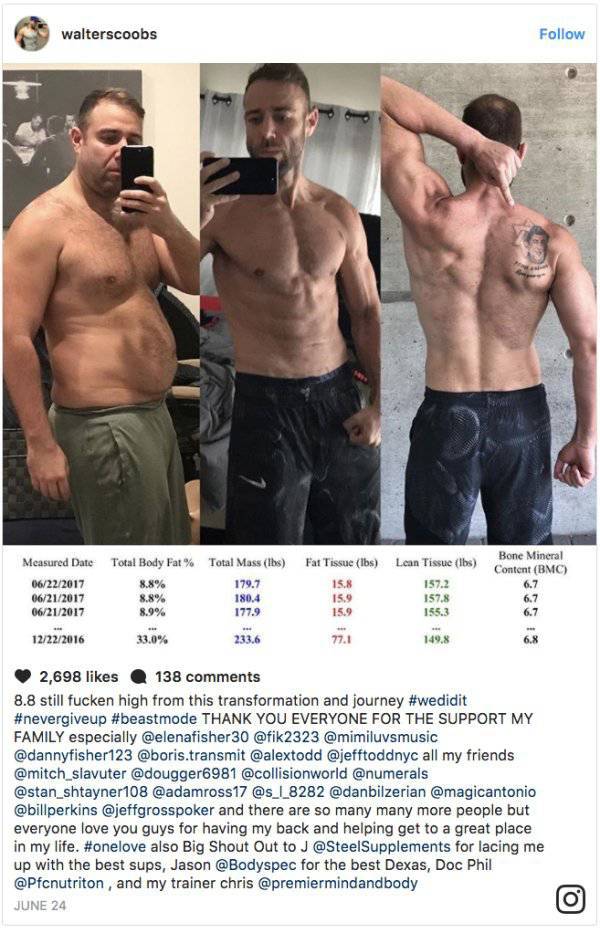