Opened to the public late last year, this bridge was designed to evoke the principles of the mobius ring and the traditional Chinese folk art of knotting. It’s 606 feet long and 78 feet high, and that 3 footpaths that wind up and down, connecting two parks and offering some surreal views of the river and landscape. 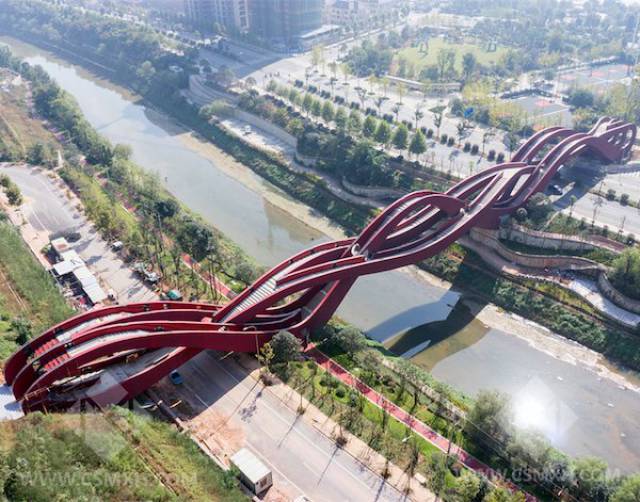 Island in the Mur

It’s kind of hard to just classify this structure as just a bridge, as it’s also an island and floating entertainment centre. This steel and glass structure links the two banks of the Mur river, and while it allows people to get from one end to the other, in the middle, you’ve got an artificial island, that looks like a half-opened seashell. There you’ll find a floating cafe, children’s playground and an amphitheatre with wavy benches for a waterside concert under the stars. 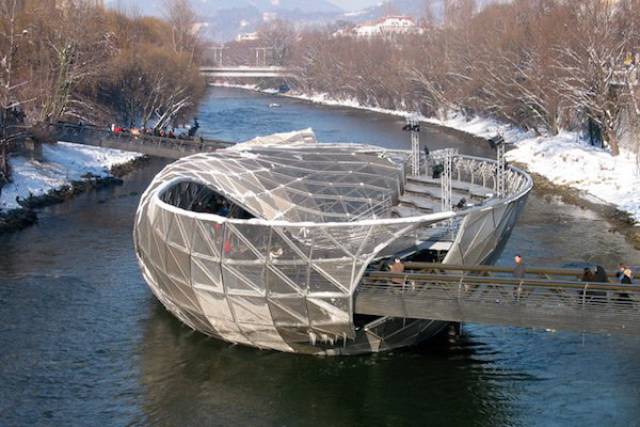 It also looks badass at night. 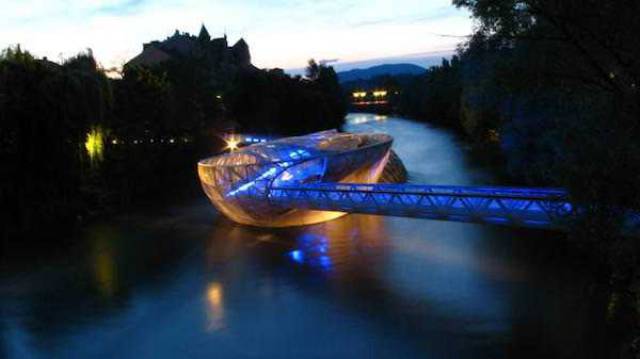 For this bridge, it’s all about perspective. While it looks like the steep incline of a roller coaster, the bridge is a mile long, linking the cities of Matsue and Sakaiminato. While it looks like an insane incline, it’s actually an optical illusion. One side of the bridge has a 6.1% grade, while the other has a 5.1% grade. When you look at it from the side, it’s a gentle rise, but from the front/back, it looks dangerously steep. 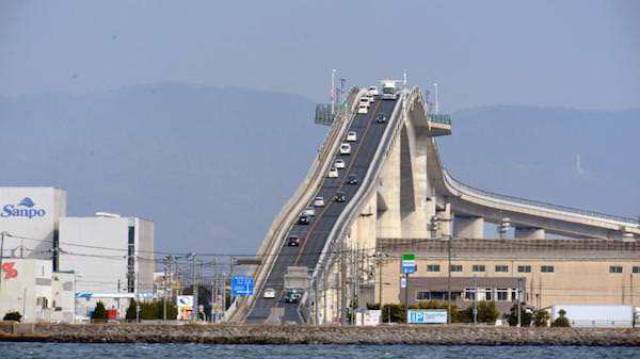 This is a cable-stayed bridge in Sao Paulo, over the Pinheiros River. It’s the only X shaped bridge in the world that’s stabilized by cables, and during the months of November and December the cables are strung with lights to create a coloured christmas tree. 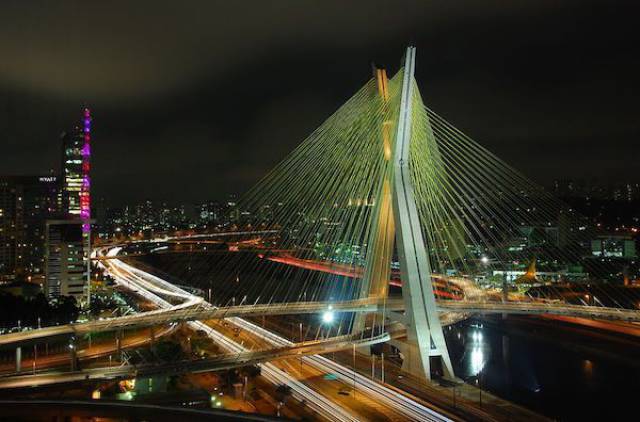 This is one of the most unusual bridges in Amsterdam, and for a city known for it’s bridges, that says a lot. It evokes the movement of a snake, or the curled smoke from a finely crafted joint. 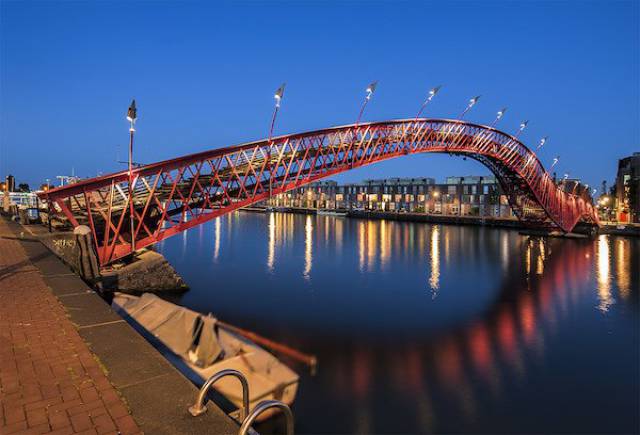 Anywhere you go in Asia, you’re going to see dragons. It’s a symbol of power and fortune, and when it came time to design a new bridge in Da Nang, the most logical choice was to make it dragon-themed. This 2,185 foot-long bridge is made of steel and literally breathes fire from its mouth. Every Saturday and Sunday at 9pm, is a spectacular show of lights and flames, making it one of the most badass bridges on this list. 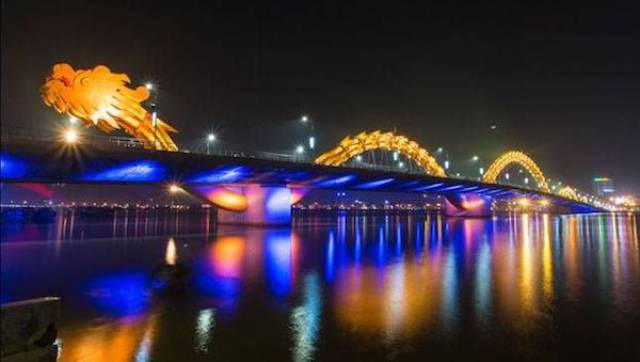 This one isn’t technically a ‘bridge’ per se, but it’s a pretty cool piece of engineering and artistry, with a little bit of WTF thrown in. This is a rotating boat elevator, that connects various canals in Scotland. The wheel raises boats up by 79 feet, but then they still need to float along an aqueduct until they hit a series of locks to get to the top of the canal. 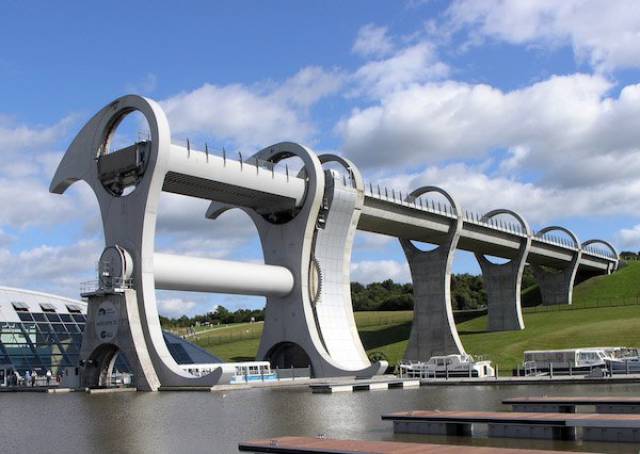 This is a bridge that doesn’t go anywhere, really. But somehow, it’s still considered a bridge. This was built to celebrate the scenic coastal landscape in Aarhus, Denmark and is a circular, walkable structure that allows people to walk from the shore to the sea. It’s about 623 feet in circumference and 197 feet in diameter, so it’s pretty big. 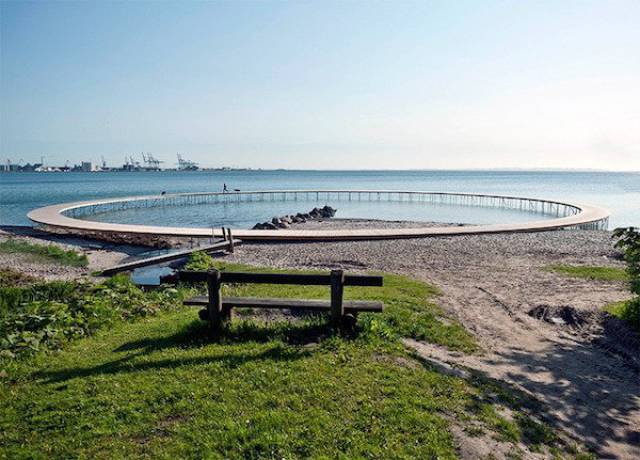 There’s a type of tree in Meghalaya, India that the locals use to build bridges, turning nature into their advantage. They train the roots of a rubber fig tree to grow along channels in the ground and across rivers using the hollowed out trunk of a betel nut tree. Once the roots hit the soil on the other side, they take root. It can take close to a decade for the bridge to become fully functional, but once it does, it’s incredibly strong. 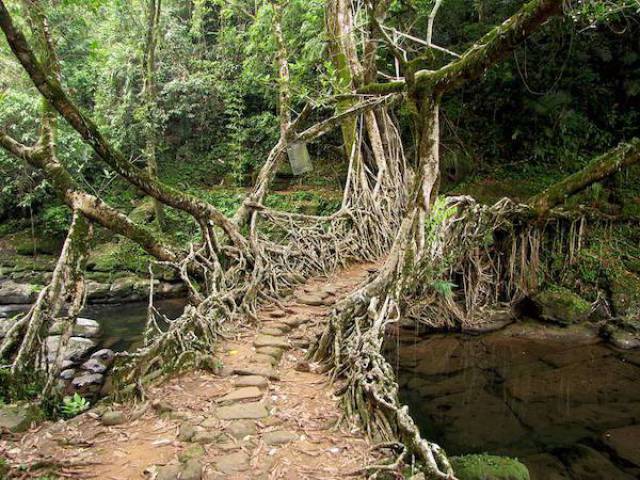 The opening of this bridge was a game-changer. It allowed for a non-stop route between mainland Europe and Sweden a reality. It’s not just a bridge, however – it’s a bridge, artificial island and tunnel. Since they needed to allow for ships to pass through, and have an un-impeeded approach to the Kastrup Airport in Denmark, a tunnel was the way to go. 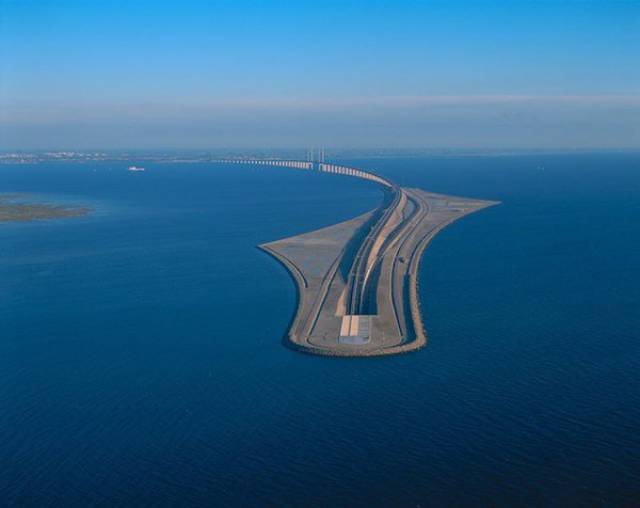 Located on the southern coast of Uruguay, this ring-shaped bridge was constructed to replace a raft crossing between the two cities of Rocha and Maldonado. The design is to ensure that drivers slow down when crossing, and they’ve built in some pedestrian walkways to take in the view of the lagoon. The original raft system that was in place only allowed for 2 cars to cross the lagoon at one time and didn’t run in bad weather, but now, over 1,000 vehicles are able to pass at one time. The hope this this easy passageway will allow future development on the coasts of these two cities. 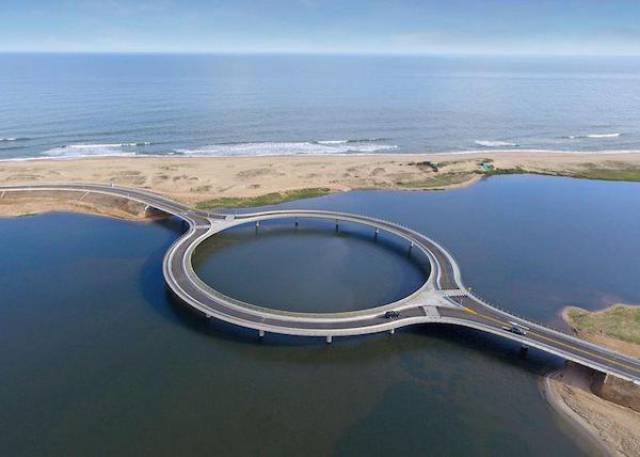 When it comes to designing bridges that need to move out of the way, this bridge designer kept things simple and looked to the pillbug for inspiration. When the ships need to come through the Grand Union Canal, the bridge rolls away. When someone needs to cross, it gently unfolds across the canal. 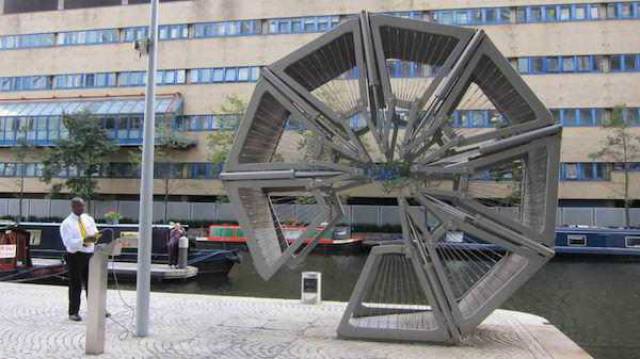 Once unrolled completely, it looks like a pretty regular bridge. 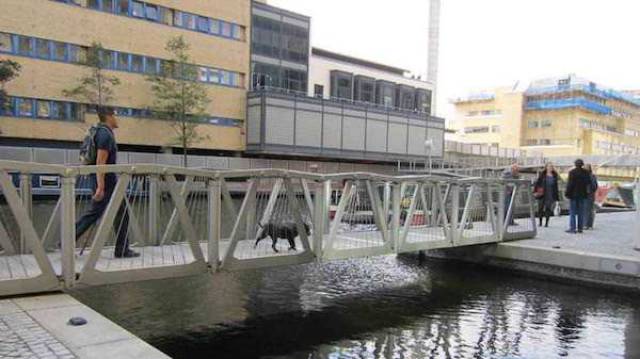 This bridge opened in 2001, and people haven’t stopped marvelling at it. It’s a tiling structure, with a pedestrian and cyclist bridge on one side, and a supporting curve on the other, both fixed to a pivot. When a ship needs to pass through, the curves tilt up. 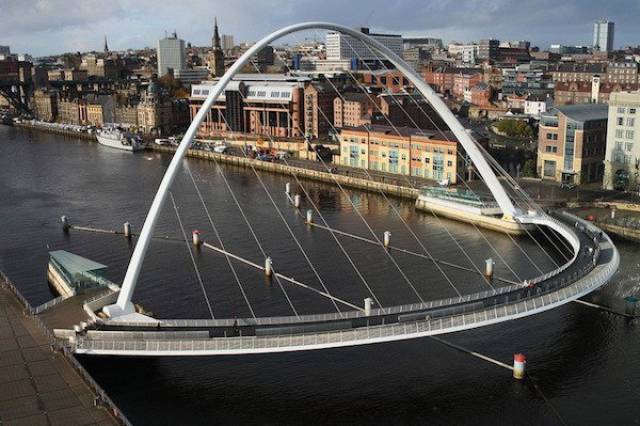 Like this. According to the designers, it’s meant to have a rotation much like a slowly opening eyelid. 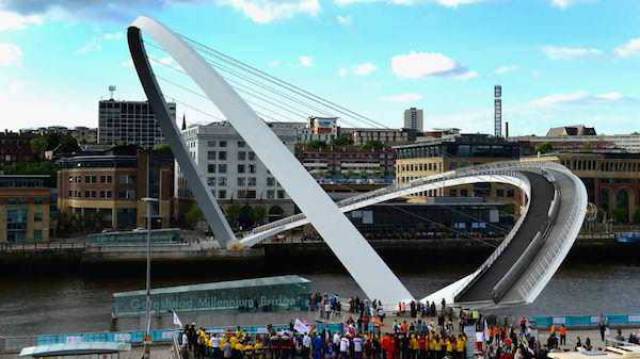 I think, out of all the awesome bridges on the list, this one is my favourite. This concrete railway bridge, might look like it’s made of Lego, but that’s actually due to the talent of a graffiti artist named Martin Heuwold. Even the bosses at Lego approve. I’d hate to see one of those bricks fall and someone step on it. You thought small Lego’s hurt. 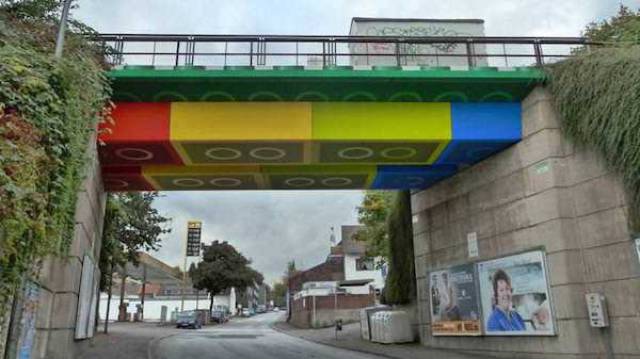 Banpo Bridge Rainbow Fountain
South Korea
According to the city of Banpo, this is the most multi-functional bridge in the world. The span, is a two-tiered bridge, with the bottom part designed to be submerged during period of high rainfall. The top bridge, was outfitted with thousands of LEDs and water jets in 2009, creating the Moonlight Rainbow Fountain. The t380 water jets shoot over 190 tons of recycled river water per minute and makes one hell of a water show.
18 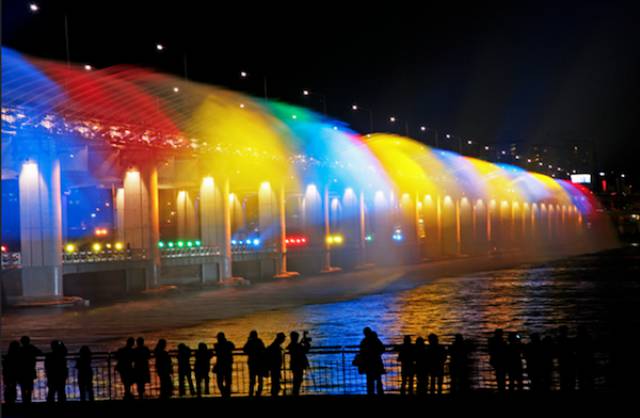 The local nickname for this bridge is the 'pancake flipper,' on account of its construction. It's the only bridge of it's kind, called an automatic bascule bridge. It uses two arms to lift an actual section of the road out of place and move it away, so that ships can pass. When the bridge is lowered, you can't even see the lift arms, as they blend into the surrounding structure. It's pretty ingenious, really. 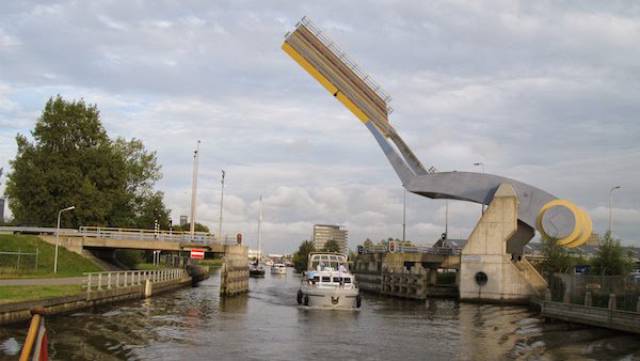 Opening in 2012, the Twin Sails Bridge is what’s called a “double-leaved bascule bridge,” that spans the channel in Dorset. The bridge has got two 75-foot tall triangular lifting leave that open up as much as 15 times a day, to let boats through. When they’re down in the closed position, the bridge is completely flat, but when they lift up, they look like yacht sails in the air. 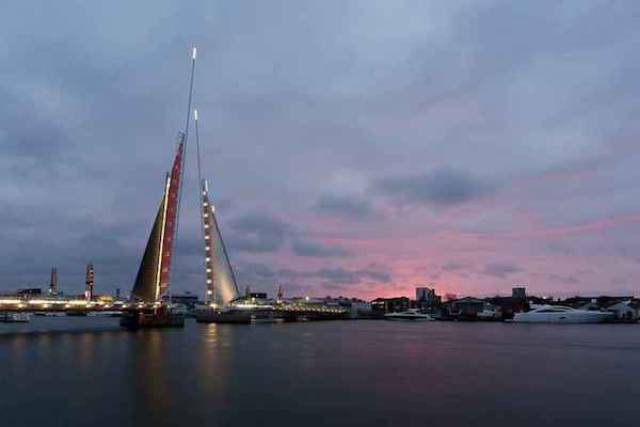 Why build a bridge over water, when you can build one through water? Back during the 17th century, fortresses and moats were used to protect parts of the Netherlands from French and Spanish invaders. One of the fort, Fort de Roovere, has just been restored and the designers had an idea to build a sunken bridge to help traverse the moat. This ‘invisible’ bridge is sneakily inserted into the water, and from far away, you can’t even see the retaining walls. It just looks like you’re walking through water, just like Moses. That’s my childhood dream. 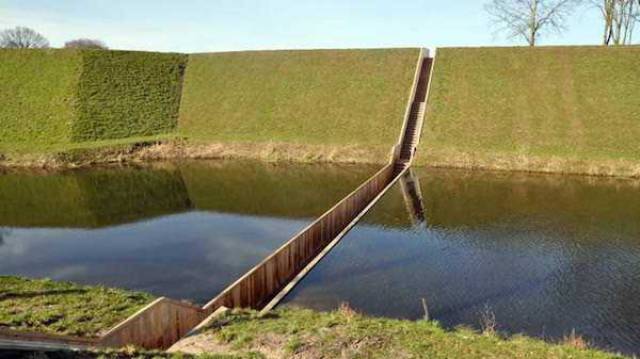