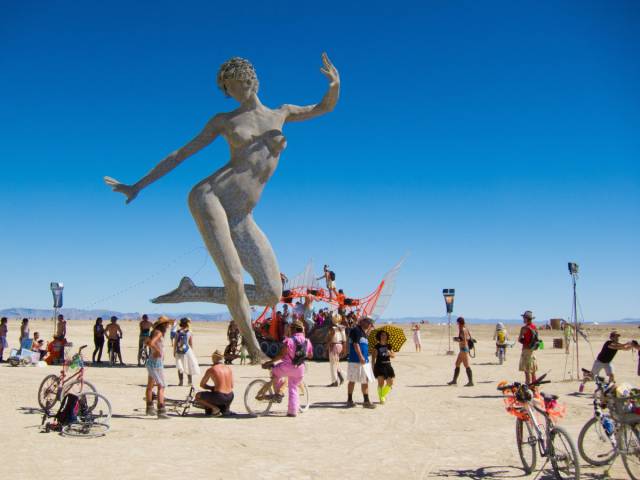 After debuting at Burning Man 2010, the 40-foot-tall sculpture moved to San Francisco's Treasure Island and then permanently to The Park Las Vegas, an outdoor area on the strip, in 2015.

The Prairie Wind Chapel by Robert Hoehn and Wind Tribe (2015) 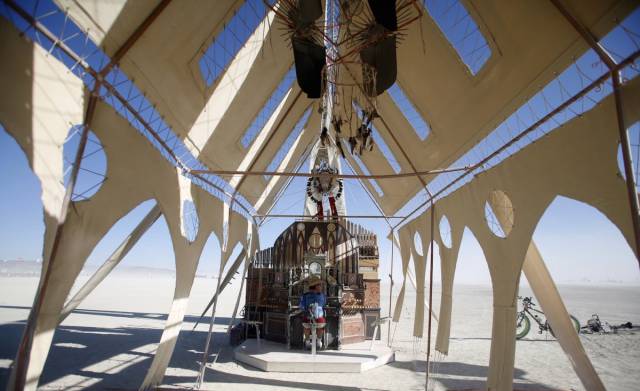 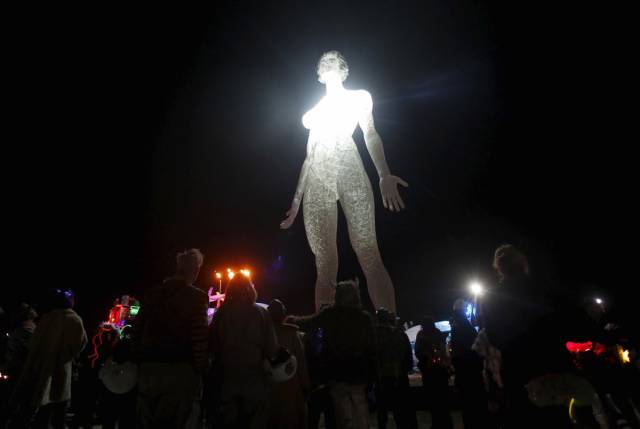 Constructed of steel rods and balls covered in stainless-steel mesh, and lots of LEDs, R-Evolution was a 48-foot-tall sculpture of a woman. It was part of a series by Chochrane that also included the Bliss Dance sculpture shown earlier. 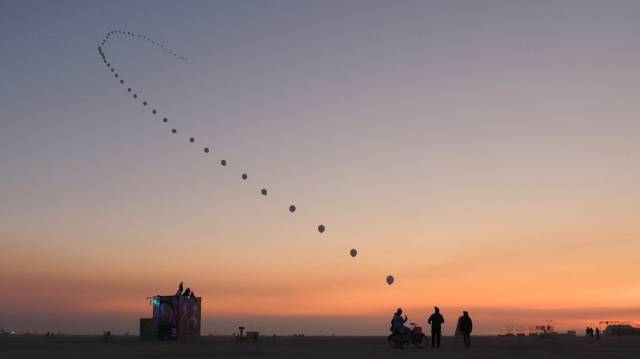 Artist Robert Bose, also known as the Balloon Guy, and his assistant ,Michael Cha, have been making chains of balloons at festivals since 2006. The longest, which they did for Burning Man 2012, stretched 6,000 feet.

"Totem of Confessions" by Michael Garlington (2015) 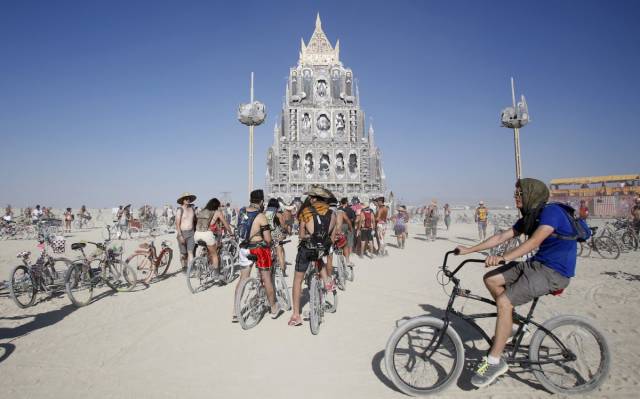 The 50-foot-tall structure was made of salvaged materials, and inspired by the architecture of ancient Buddhist temples. 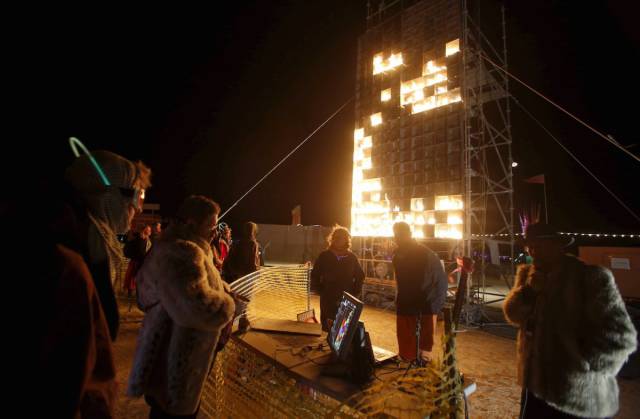 MIAOU Labs, a Montréal-based artist collective, created a 27-foot-tall installation of the game Tetris, made of steel boxes. People could actually play it — even though the shapes were formed using fire.

The Temple of Transition by Chris Hankins and his crew (2011) 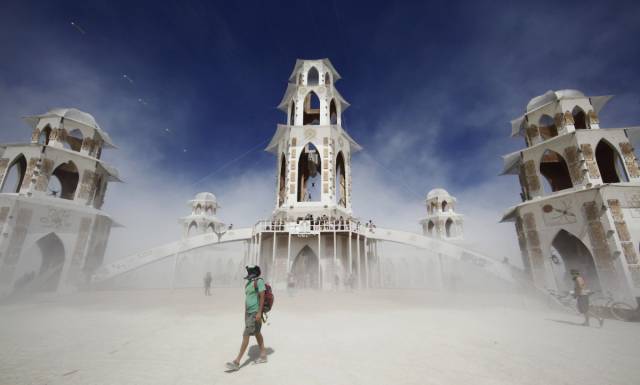 Over 300 people teamed up to create the Temple of Transition, which was comprised of six structures: five 58-foot-tall outer temples and a 120-foot-tall inner temple. They were all connected with 60-foot-long walkways. 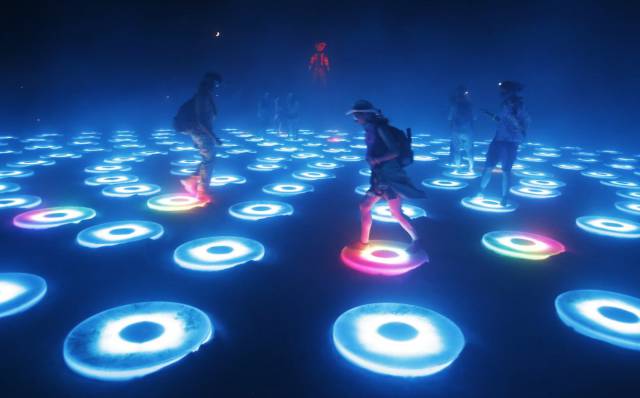 The Super Pool was made up of dozens of disks that lit up when someone stepped on them.

The Ego Project by Laura Kimpton and Michael Garlington (2012) 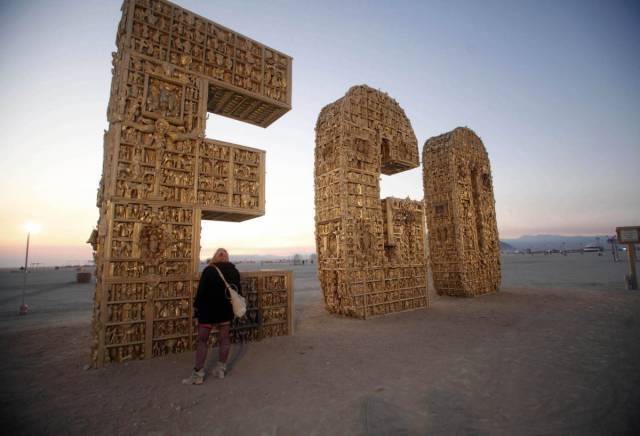 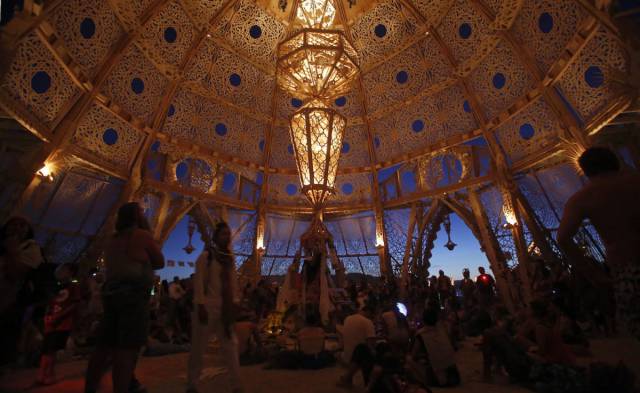 The 70-foot-tall gold-painted temple was made primarily of wood and steel. It was surrounded by eight altars where participants could go to sit and reflect. 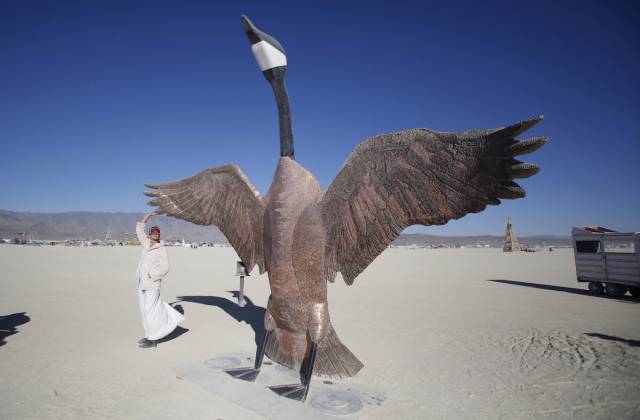 This sculpture of a squawking goose was made of 120,000 Canadian and American pennies. 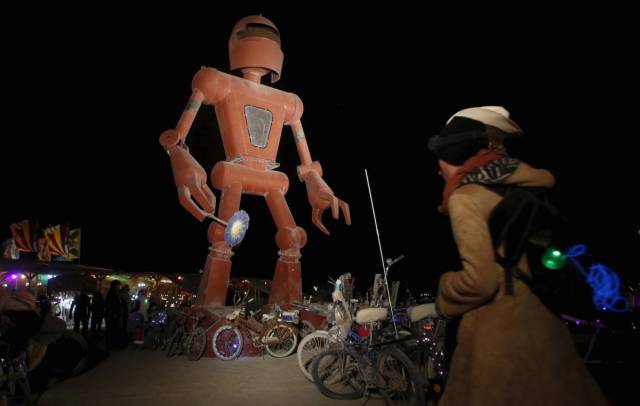 Becoming Human was a 30-foot-tall sculpture of a robot, which occasionally moved its arm to smell the flower in its hand. 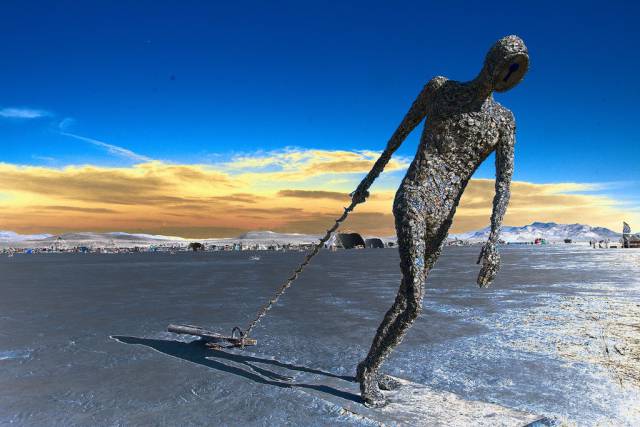 This 12-foot-tall sculpture was made entirely of locks and keys.

The Blunderwood Portable by the Cat and the Cockroach Collective (2015) 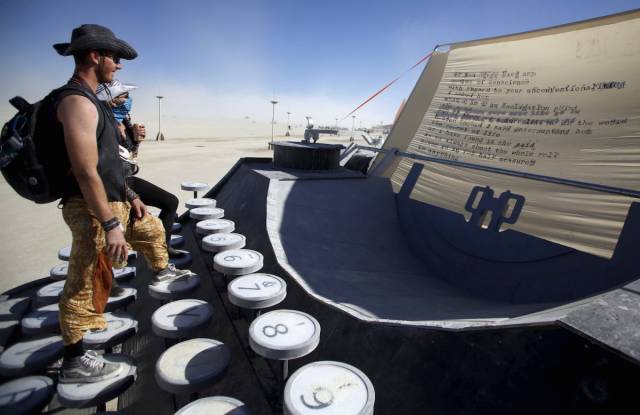 The Cat and the Cockroach Collective, a group of Boston-based artists, built a giant 24:1-scale replica of a 1927 Underwood Portable typewriter.

During the day, it displayed a Archy and Mehitabel poem; and at night, the paper changed to a projection screen so that participants could type their own messages. At the end of Burning Man 2015, the structure was burned. 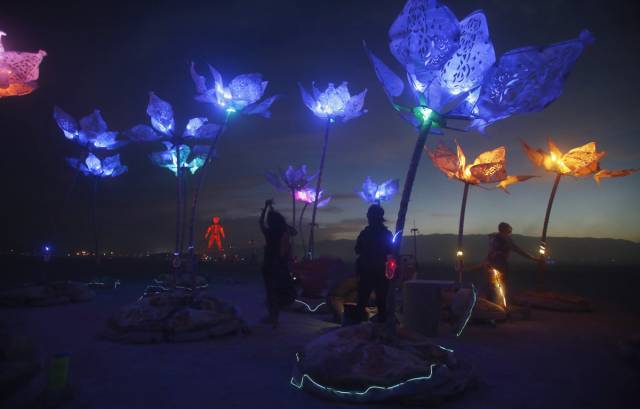 When someone placed their hand on one of the 20 lotuses that made up Pulse and Bloom, the flower's light would flash in a rhythm matching that person's heartbeat.

It was one of the largest biofeedback installations in the world, according to its creators. 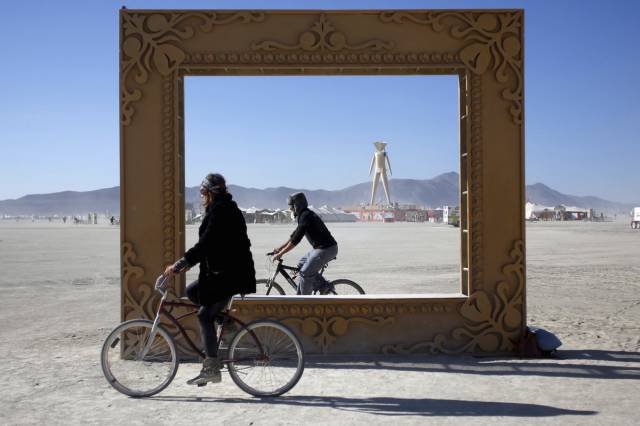 This 12-foot-tall gold picture frame invited participants to snap a photo or climb the structure. 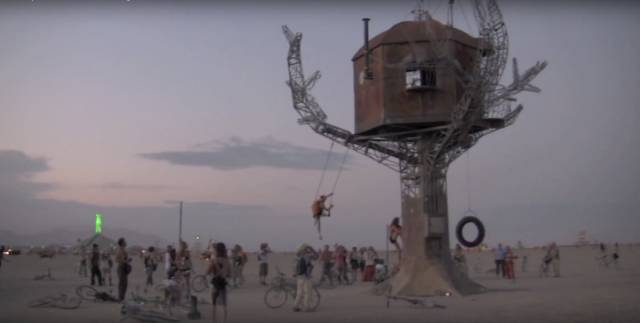 Made of recycled wood and metal, Orlando explains on a website about the installation that the treehouse was inspired by a combination of Victorian architecture, H.G. Wells books, and Jules Verne novels and poems.

It now permanently lives at the Dogfish Head Brewery in Milton, Delaware. 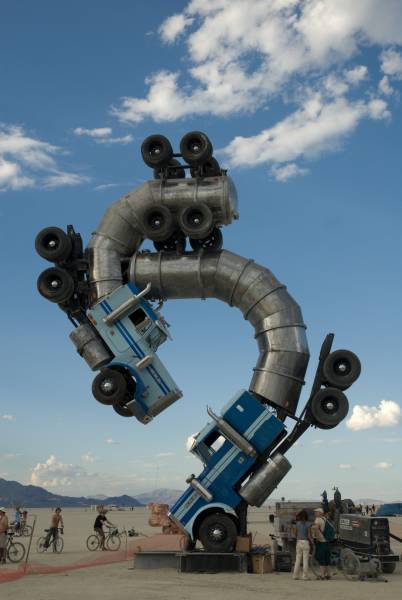 Made from two 18-wheelers, Big Rig Jig was a sculpture by the Brooklyn-based artist Mike Ross. He used custom-built screws to support it, according to Atlas Obscura. 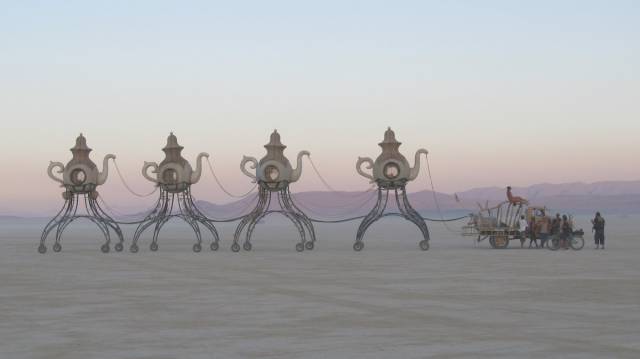 The train of tea pots consisted of five trailers pulled by a 1943 GMC 4x4. The pots actually had boiling water inside. 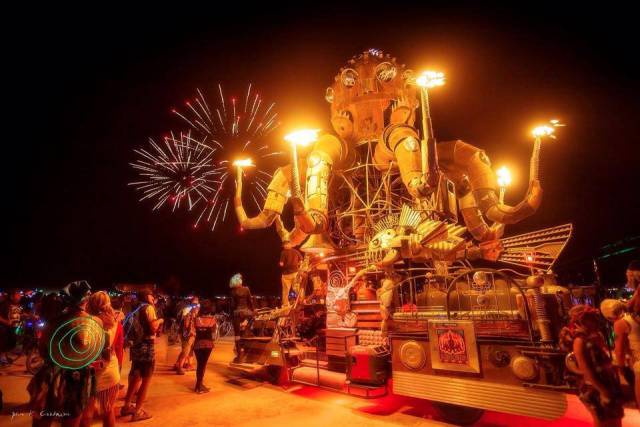 El Pulpo Mechanico was a flaming octopus made of recycled metal from a junk yard. When it was erected ar Burning Man, it used 200 gallons of propane per night and lit up the "playa," the main festival area. 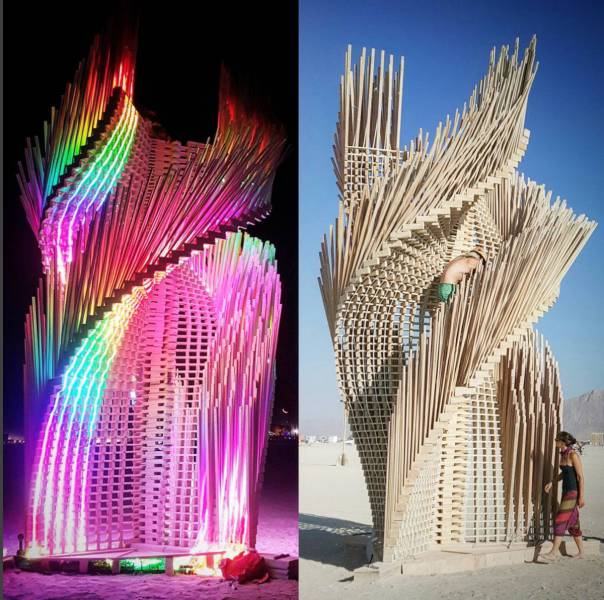 "Tangential Dreams" was a wooden, spiraled, 10-foot sculpture hooked up to 60 LEDs. At night, it lit up rainbow colors. 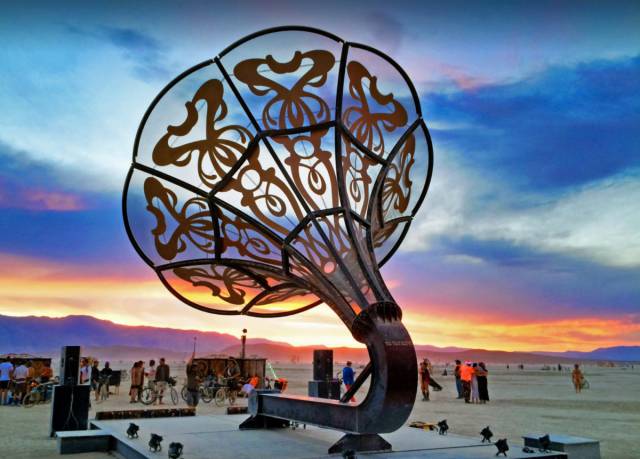 Stretching 35 feet high, La Victrola was a giant horn on top of a stage featuring music performances at Burning Man 2016.

According to its creators, the sculpture featured two tons of curved steel ribbing that could withstand 90 mph winds. 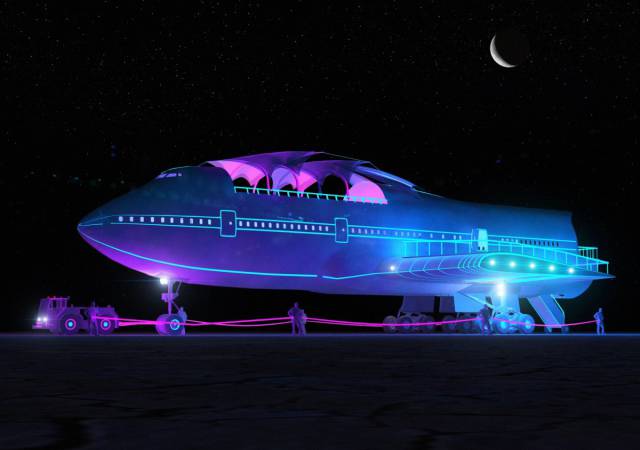 The artist collective Big Imagination Foundation raised over $86,000 on Indiegogo, gutted a Boeing 747 jet, and tricked it out with lights and lounges for the festival's attendees.