How Do These Fast Food Items Even Exist?! (25 pics)

When you think of a lobster roll - lobster, perfectly cooked, mixed with mayo and spices, served on a toasted roll with lettuce - you probably don't think McDonald's. And yet, in Canada you can get a McLobster. They even sold them in the US for awhile in 2015. Fast food lobster for only $7.99...mmmm.. 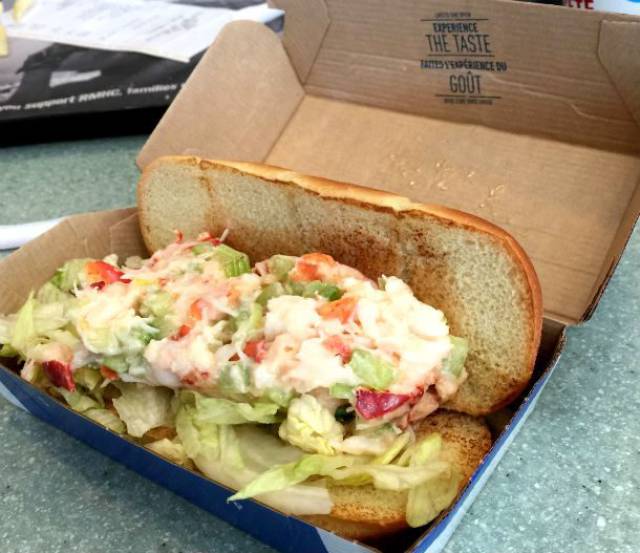 If you're in Hong Kong and can't decide between fish eggs with cream cheese and pizza, don't worry, Pizza Hut's got you covered with a Flying Fish Roe Salmon Cream Cheese Pizza. The fish eggs and cream cheese are in the crust. Then the pizza is topped with clams, scallops, and shrimp. It's probably really good when you're...slightly intoxicated.

To celebrate the global dominance of the PC Master Race, as well as the release of Windows 7, Burger King Japan released the Windows 7 Whopper. Which was a Whopper, with 7 patties. It cost the equivalent of $8.55 ish USD. 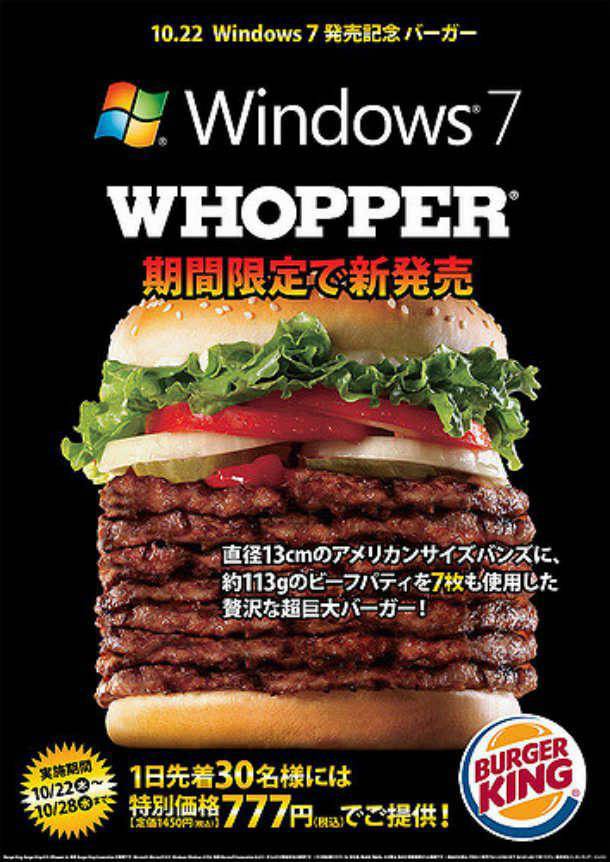 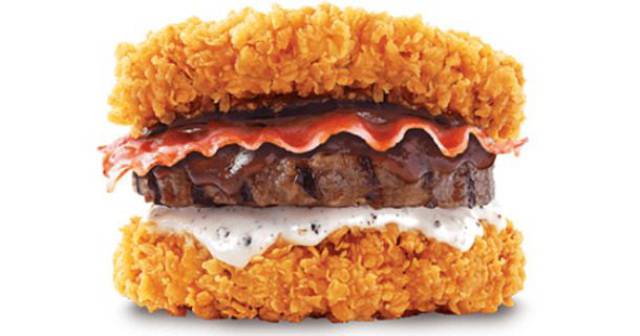 Obviously different cultures have different tastes. What might seem gross to someone in the US might be delicious to someone in say, Japan. That said, still not understanding the chicken/honey/mustard/chocolate sandwich by Japanese chain Lotteria. 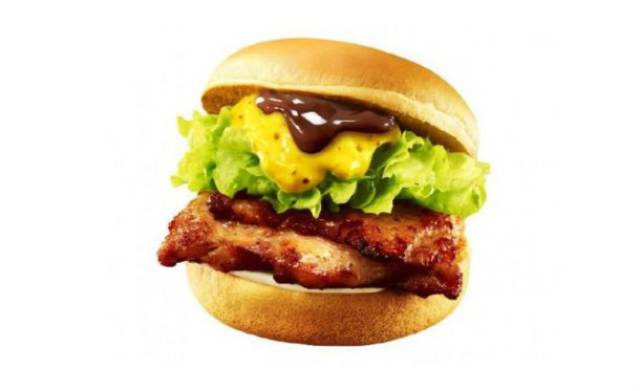 In 2015, Hardee's released the "All American Thickburger." Retailing for around $6 USD, the burger had all the standard burger fixin's - beef patty, red onion, ketchup, mustard, pickles, tomato, and cheese - but it ALSO had a handful of potato chips and a split hot dog. 'MERICA! 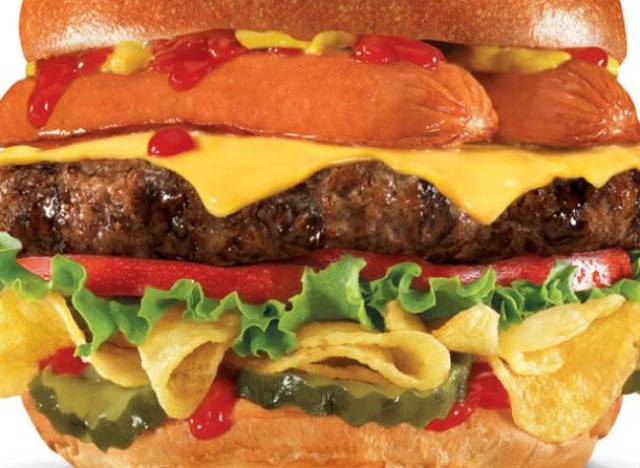 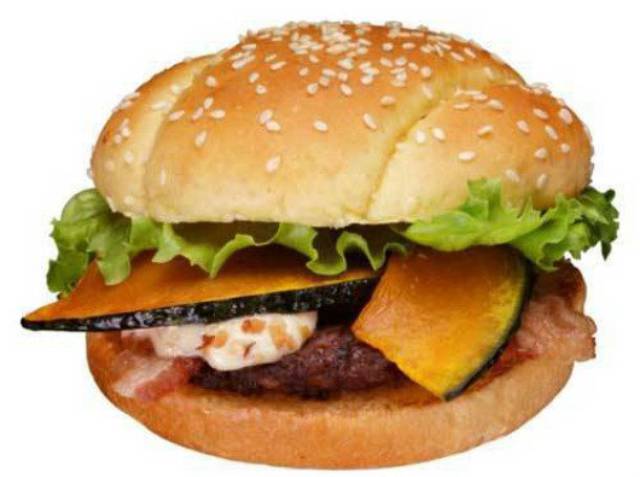 Dunkin Doughnuts China made a Pork and Seaweed Doughnut. 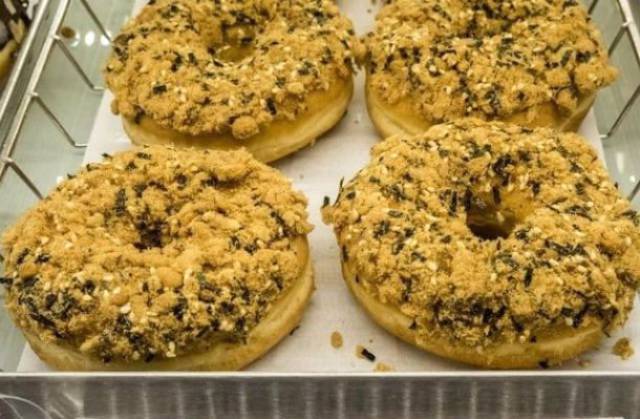 In 2014, Taco Bell started serving breakfast. Two items that came with this were the "Biscuit Taco" which was...what it sounds like. A biscuit shaped like a taco shell that you could fill with assorted breakfasty things. Like fried chicken and jalapeno honey sauce. Along that same vein, there was also a waffle taco, which was a waffle, sausage, and scrambled eggs, folded to look like a taco. 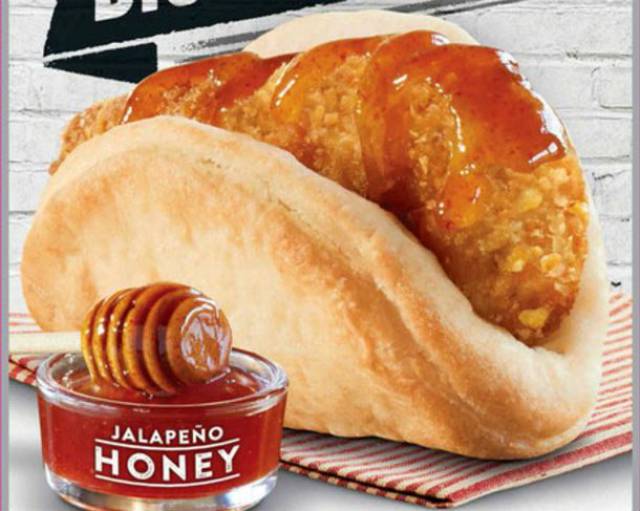 Both McDonald's and Burger King make black burgers overseas. McDonald's had a black bunned burger for Halloween. It was admittedly less impressive than Burger King's Kuro burger which has cheese dyed black with bamboo charcoal and a black sauce made with squid ink. 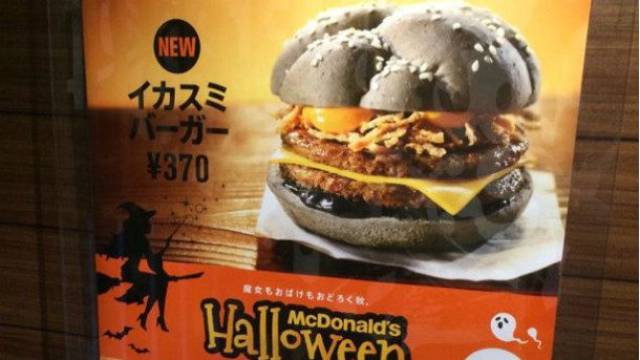 Just like McDonald's in the US has the McRib, McDonald's in Japan has once in awhile favorites with a dedicated fan base. It's called the Gracoro Burger, and it's got McDonald's take on a shrimp croquette in place of a beef patty. So it's a ball of shrimp, white sauce and macaroni, coated in bread crumbs and deep fried. You can even get them with cheese! Mmmm? 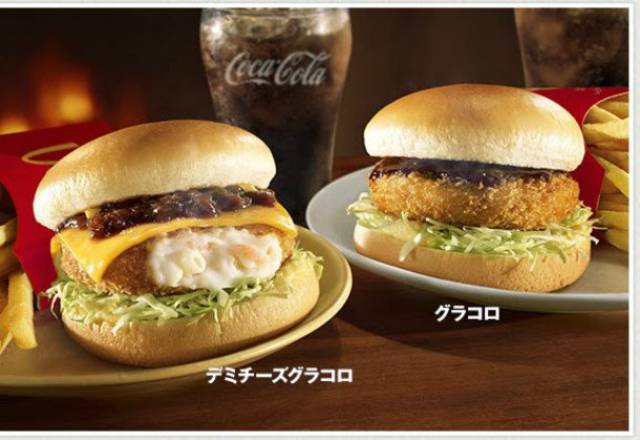 KFC China launched a "rose burger," which was rose flavored chicken. On a pink bun. With Cheese. 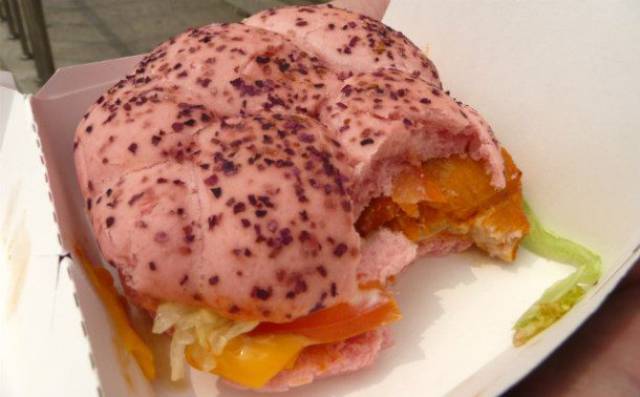 McDonald's in the Phillippines sells McSpagetti. It's probably not the greatest, but still not too weird. What is kind of weird is the random fried chicken leg or wing that comes with it. No explanation, just chicken and spaghetti. 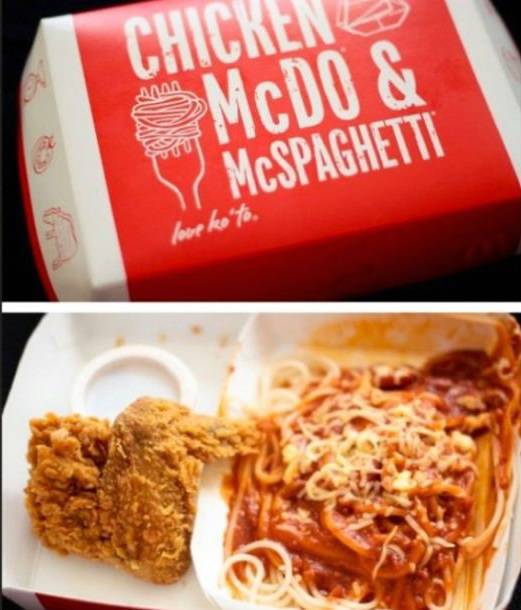 Burger King Whopper Beef Poutine. Okay, so for those who don't know, Poutine is a beloved dish of Canada. It's french fries, cheese curds, and beef gravy. Burger King takes it a step further and adds chopped up beef patties, ketchup, mustard, and pickles. With the beef gravy. 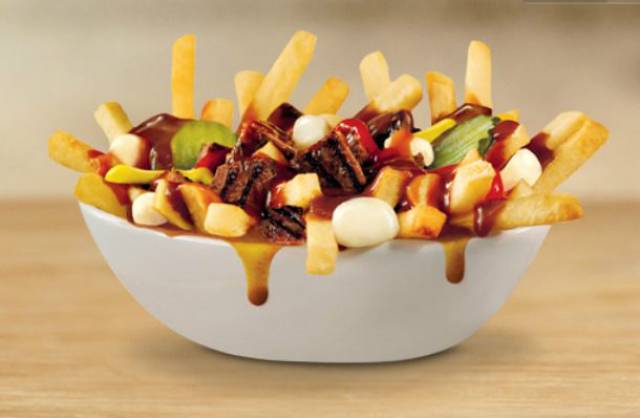 If you're in Singapore, the Dunkin Donuts there offer a Wasabi Cheese Donut. Wasabi and coffee sound awful together, but who are we to judge?

Wendy's Japan introduced a Lobster Surf & Turf burger in 2012. The burger had lobster claw and Wendy's square beef patty. Another version had the lobster and...caviar? Yep. Okay. The burgers were around $16 USD. 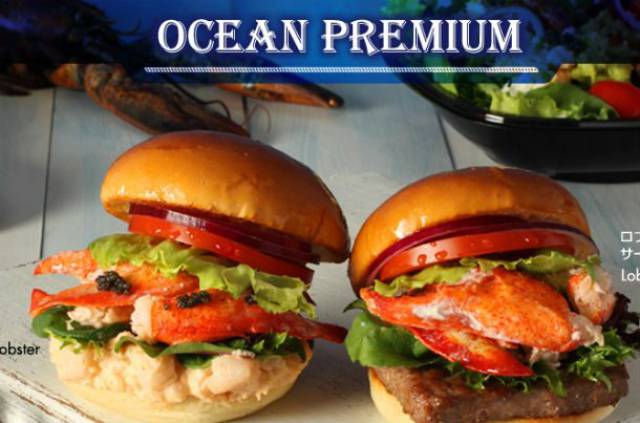 Remember Lotteria? They make another noteworthy item - The "Shrimp Tree," which is 5 deep-fried shrimp patties. 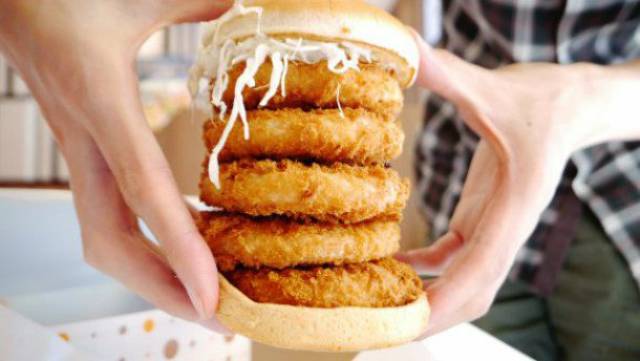 Wendy's Japan has a burger that works out to be about $16 USD on their menu. What's on it? Foie Gras (goose liver). That's...not a product we want to eat from a restaurant that serves things wrapped in paper. 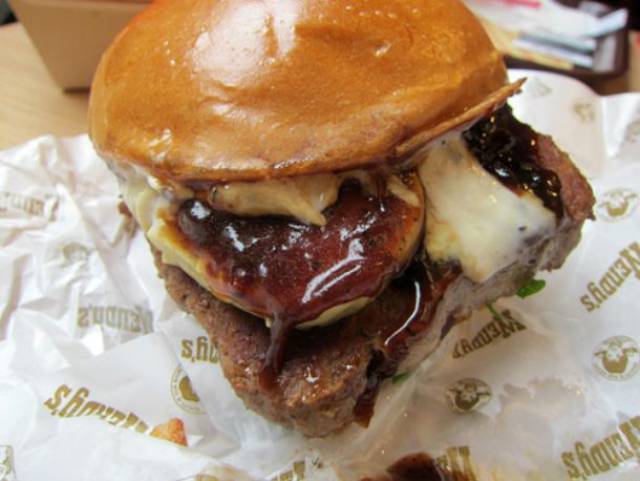 The McRice burger is / was available in several Asian countries at McDonald's. Two buns of pressed white rice that are then toasted contain a burger OR chicken patty, lettuce, red cabbage, and Asian barbecue sauce. 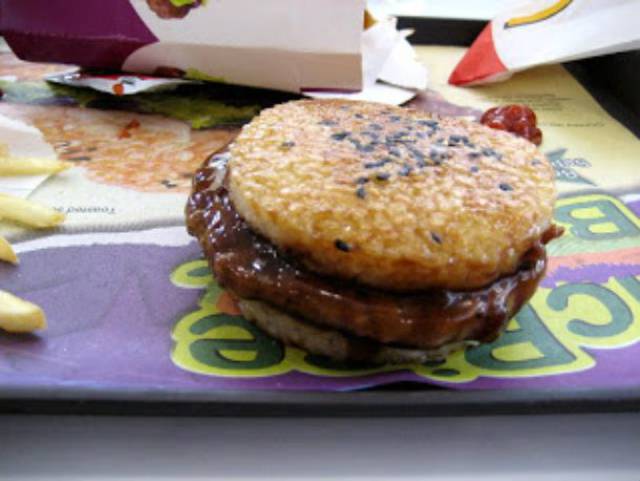 The Black Ninja Burger from Burger King Japan is the second burger on our list with a black bun. But this one has a weirdly shaped piece of bacon that's supposed to look like a tongue, so your burger can lick you back. Interpret that how you will. 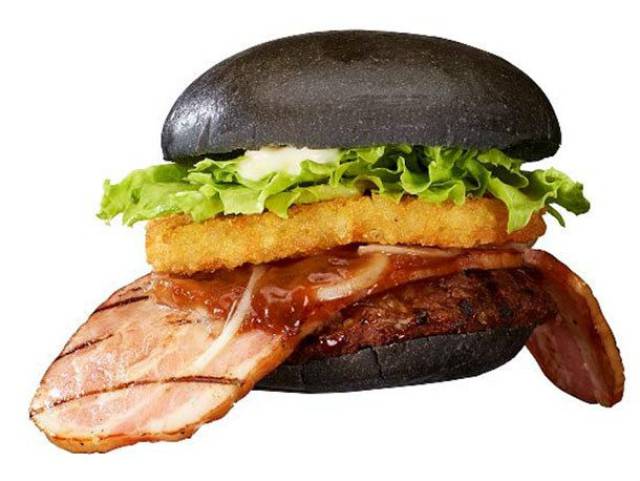 The Naked Chicken Chalupa from Taco Bell was...a chalupa, with a shell of fried chicken. Inside was the usual chalupa toppings of lettuce, cheese, and tomatoes, but instead of sour cream there was a spicy avocado sauce. 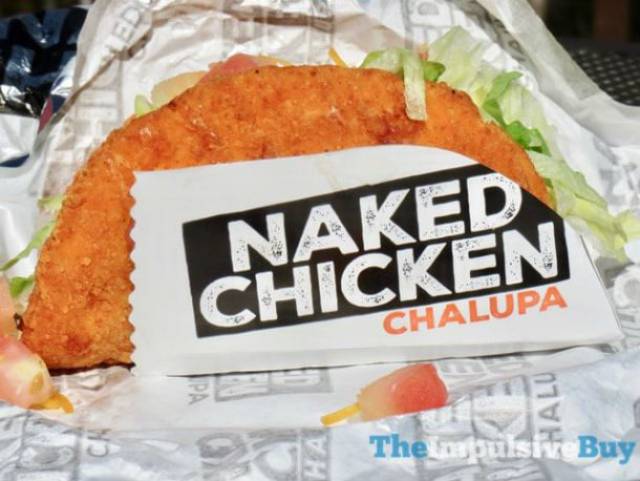 KFC Brazil offered a fried chicken sandwich....with creamed corn? It was made in partnership with Philadelphia cream cheese. That actually doesn't sound horrible.

Pizza Hut Global is pretty determined to make the most interesting fast food combinations ever known. As a good example, there is the "Star Edge Pizza" from South Korea. It has fruit (cranberry or apple), cream cheese, bacon, sausage, steak, shrimp, and...calamari. 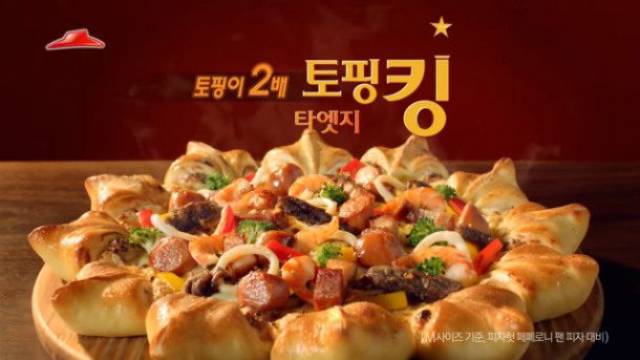 Nothing says "Healthy Start To The Day" like deep fried cereal balls filled with frosting. Taco Bell sold an item called "Cap'n Crunch Delights" in 2015, and they were basically fried doughnut like...things.. rolled in Cap'n Crunch cereal and filled with "milk," which was actually warm runny frosting. And they were very orange. 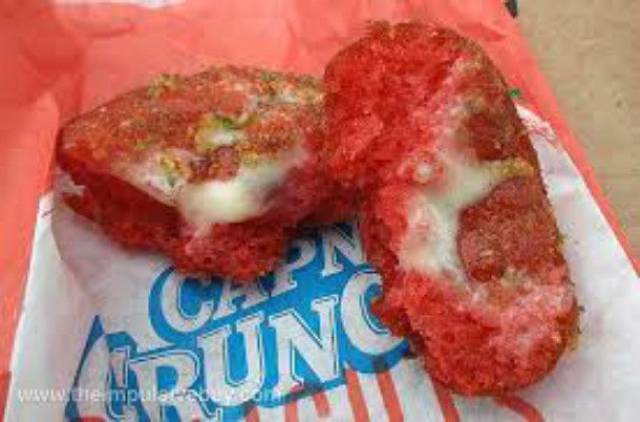 If the infamous "Double Down" from KFC wasn't abomination enough, in January 2015, KFC locations in the Philippines sold a Double Down Dog. A hot dog in a fried chicken bun, with mysterious cheese sauce on top. Um... 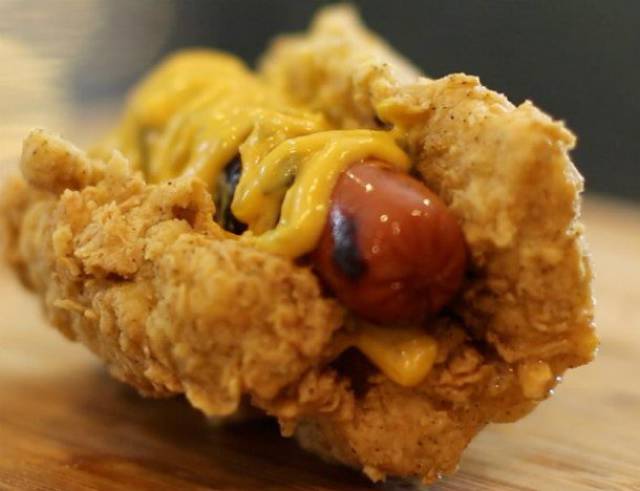