Money Has So Many Safety Measures Nowadays (11 pics)

The EURion constellation, or Omron rings 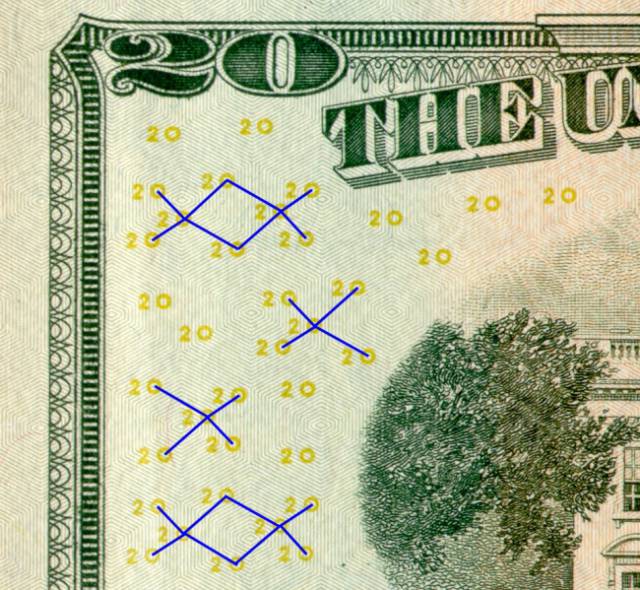 The EURion constellation is a repeated pattern of 5 rings that lets copy machines recognize the notes. Some printers and copiers refuse to print notes with these patterns, painting over or even shutting down. The constellation can be seen on virtually every major world currency. 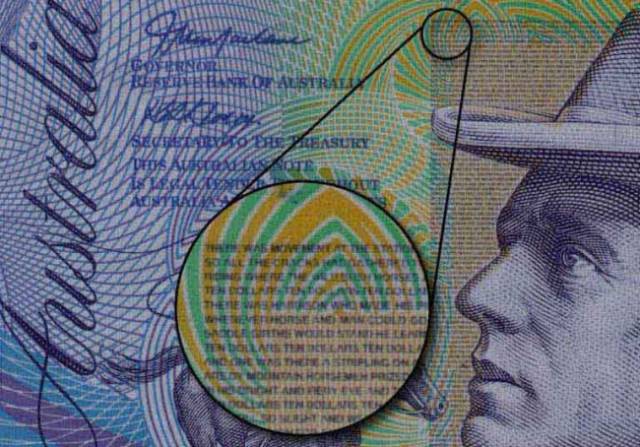 This technique allows the printing of minuscule text that is hard to forge because of its technical requirements. A copy machine would just blur the text and make it illegible. This method is also used in most world currencies, including US dollars, UK pounds, euros, etc.

As seen in the right-hand picture, there’s a tiny gap in the letter "N" that shouldn’t be there. It’s also a fault of copying machinery, although it’s only discernible with the help of very sensitive equipment. 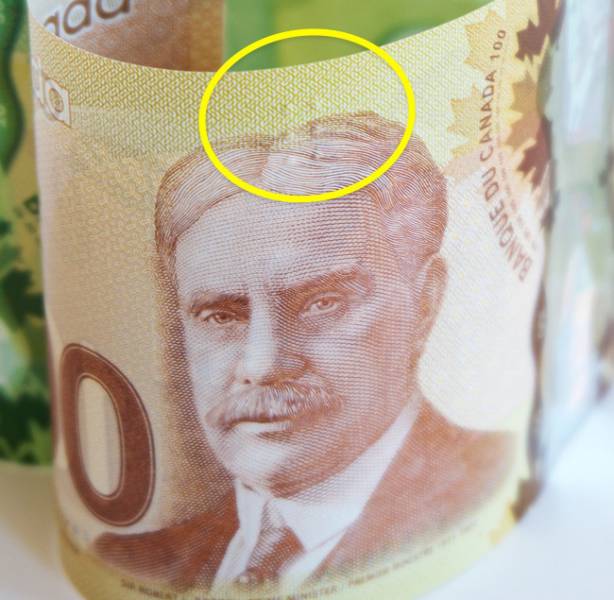 This is another common security measure for banknotes, especially of higher denominations, as well as visas, passports, and other IDs. An additional advantage of this method is that visually impaired people can use it to recognize a genuine note. Normally, only some elements of a note are embossed, like the number 10 on a €10 bill. 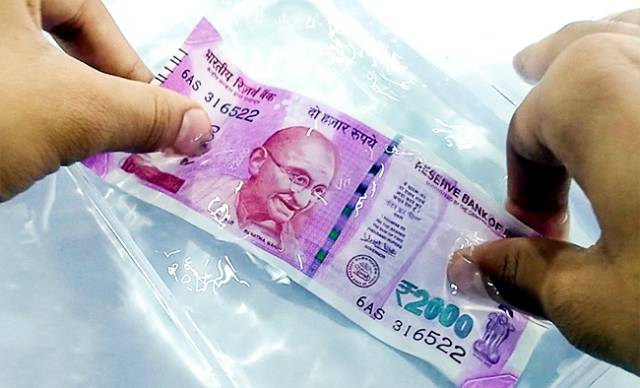 The paper used to make bills is not the same paper we use for our everyday needs. US dollars, for instance, are made of 75% cotton and 25% linen, which is why the paper they’re printed on is called "rag paper."

Polymer paper is also becoming popular today. It’s difficult to fake, and even if it looks genuine, it’s very different to the touch.

A good way to tell a forged bill is to apply some iodine: cellulose will react to it, and the stain will become blue. 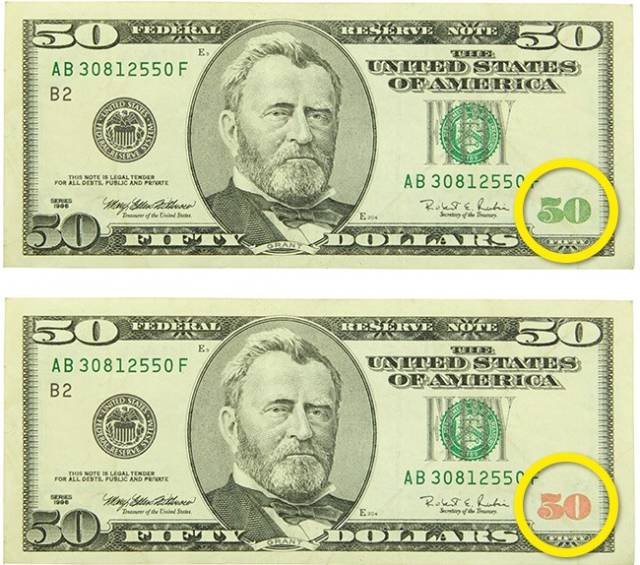 Most countries of the world use such inks to print their banknotes. The ink reflects the light and changes its color with the angle. For example, the number 50 on a $50 bill can be either copper or bright green.

The technique can’t be copied and is very hard to fake because there are only a few companies in the world that are permitted to manufacture such color-shifting inks. 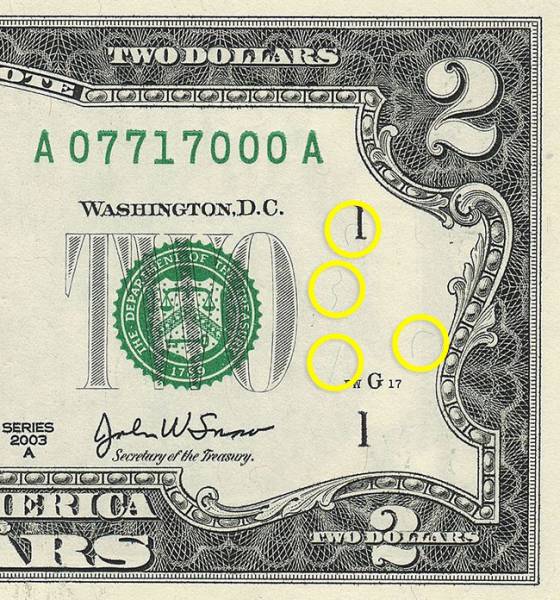 Any bill contains colored protective fibers that seem to be chaotically placed in the note. They look like random hair-thin threads, and experienced cashiers can even tell a genuine bill by touch when feeling those fibers. They also usually react to a UV light detector. 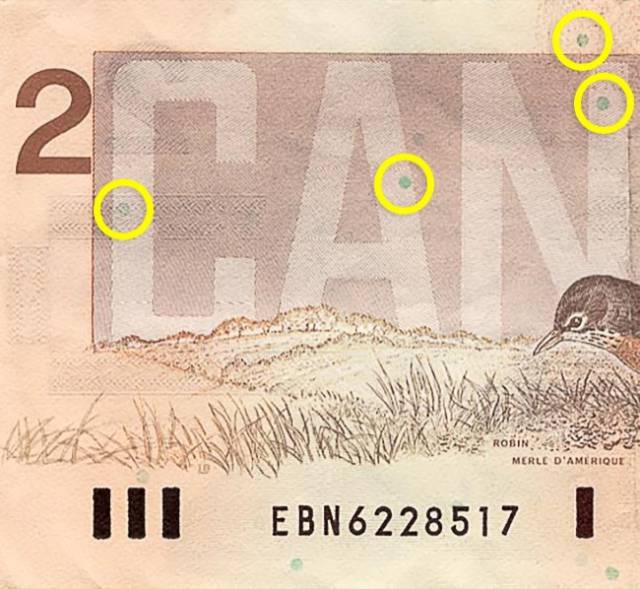 Another clever security feature that lights up under UV rays are planchettes. These are randomly placed on the bills and are difficult to fake because they’re ingrained in the notes, just like the protective fibers. 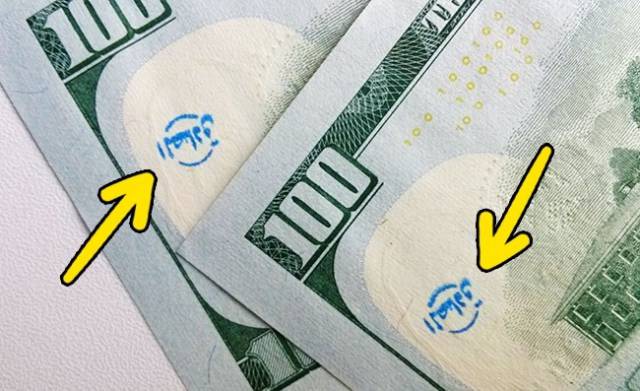 This is an older practice, yet some countries, including China, still use it. It was first used to protect coins from counterfeiting and later adapted for bills. Chopmarks can be seen on a lesser part of the banknotes because they’re not set in the mints — it’s banks and exchange offices that put them onto bills to verify them. Every organization has its own secret mark. 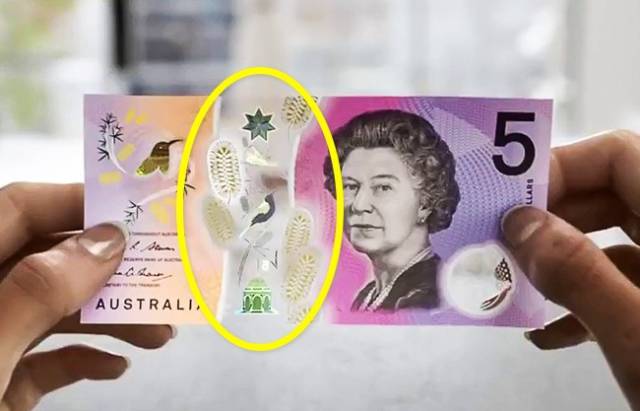 Polymer paper made it possible to print bills with transparent parts, or windows. Manufacturers claim that the windows are a replacement for watermarks and are almost impossible to counterfeit. They can be seen in the Canadian, Australian, and British banknotes. 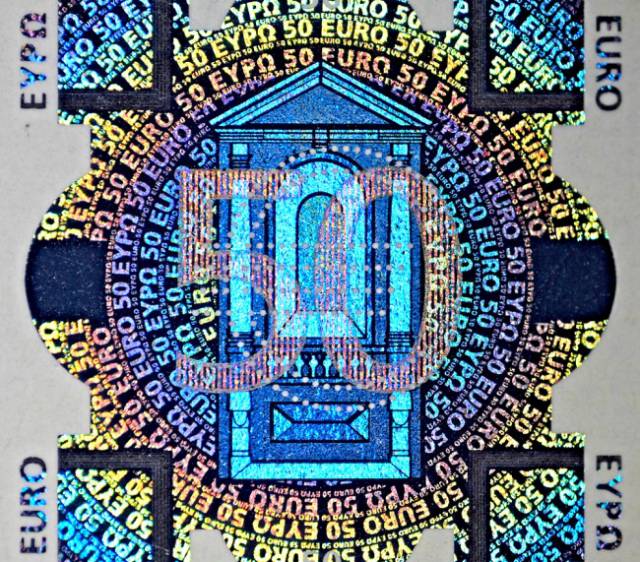 KolourOptik is the most advanced security technology today. It’s a 3D image made with a laser on a thin sheet of metal that changes colors under different angles. It was first used in Austria in 1988. KolourOptik is usually applied to notes of higher denominations, but smaller bills can also have it, normally as strips.