A Glassworks at midnight, taken in Indiana in August 1908. 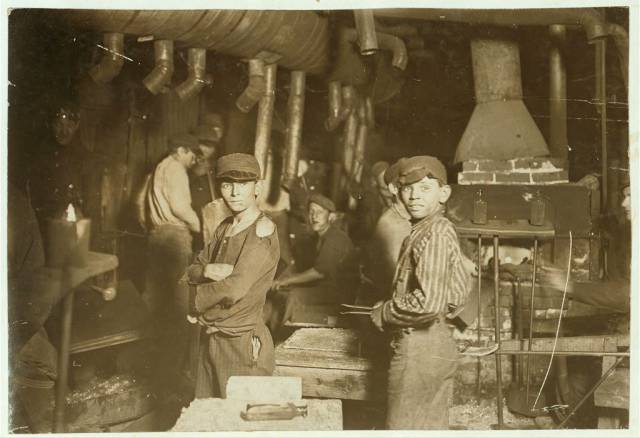 Jewel and Harold Walker, 6 and 5 years old, pick 20 to 25 pounds of cotton a day. Father said: "I promised 'em a little wagon if they'd pick steady, and now they have half a bagful in just a little while." Location: Comanche County--[Geronimo], Oklahoma, October 1916. 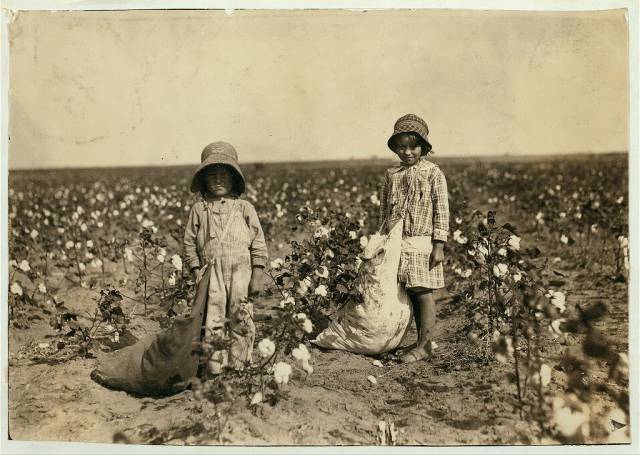 Vance, a trapper Boy, 15 years old. He had trapped for several years in a West Virginia coal mine for $0.75 a day for 10 hours work. All he does is open and shut this door: Most of the time he sits here idle, waiting for the cars to come. On account of the intense darkness in the mine, the hieroglyphics on the door were not visible until plate was developed. Taken in September 1908. 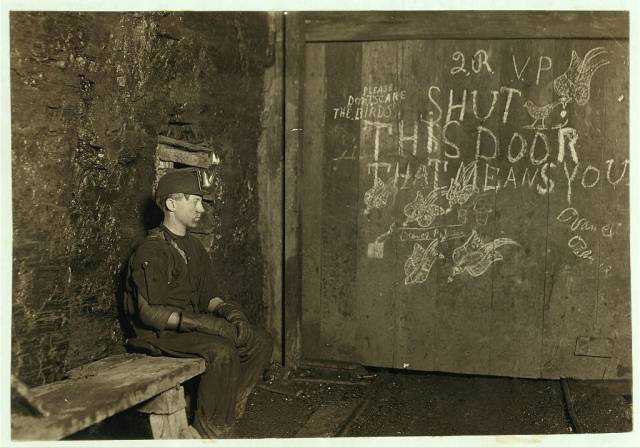 Manuel, the young shrimp-picker, 5 years old and a mountain of child-labor oyster shells behind him. He worked the year before. Understands not a word of English. Dunbar, Lopez, Dukate Company. Location: Biloxi, Mississippi, February 1911. 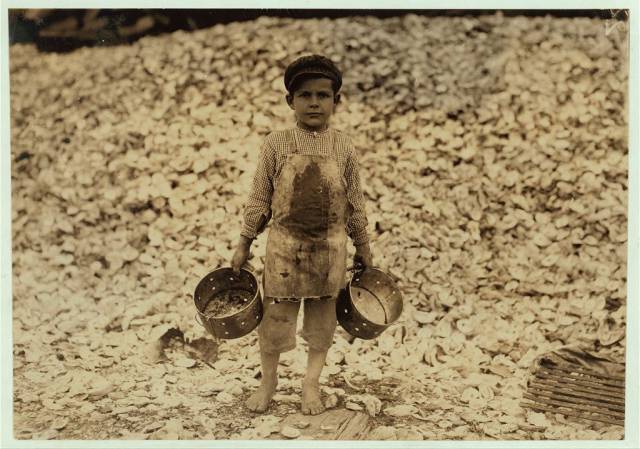 Freddie Kafer, a very immature little newsie selling Saturday Evening Posts and newspapers at the entrance to the State Capitol. He did not know his age, nor much of anything else. He was said to be 5 or 6 years old. Nearby, Hine found Jack who said he was 8 years old, and who was carrying a bag full of Saturday Evening Posts, which weighed nearly 1/2 of his own weight. The bag weighed 24 pounds, and he weighed only 55 pounds. He carried this bag for several blocks to the car. Said he was taking them home. Sacramento, California, May 1915. 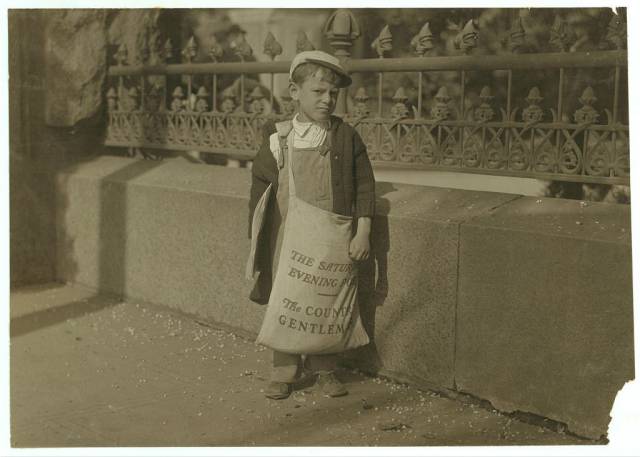 This little girl, like many others in this state, is so small she has to stand on a box to reach her machine. She is regularly employed as a knitter in a hosiery mill. Said she did not know how long she had worked there. Location: Loudon, Tennessee, December 1910. 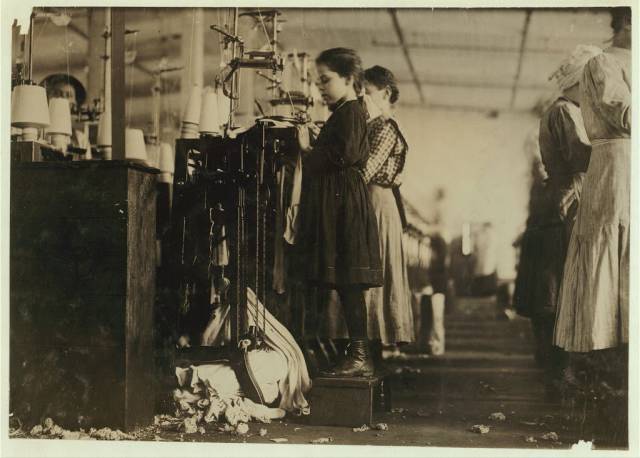 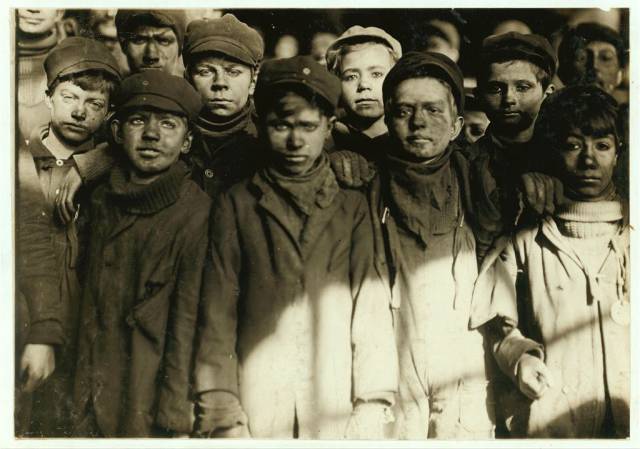 Four-year-old Mary, who shucks two pots of oysters a day and tends the baby when not working. The boss said that next year Mary will work steady as the rest of them. The mother is the fastest shucker in the place. She earns $1.50 a day. Works part of the time with her sick baby in her arms. Dunbar, Louisiana, March 1911. 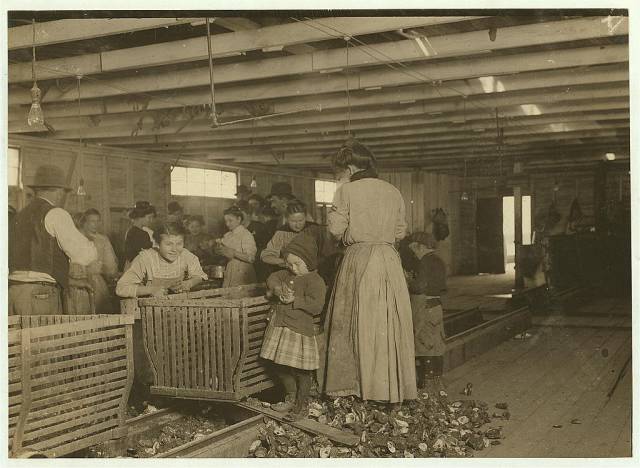 Little Fannie, 7 years old, 48 inches high, helps sister in Elk Mills. Her sister (in photo) said, "Yes, she he'ps me right smart. Not all day but all she can. Yes, she started with me at six this mornin'." These two belong to a family of 19 children. Taken in Fayetteville, Tennessee, November 1910. 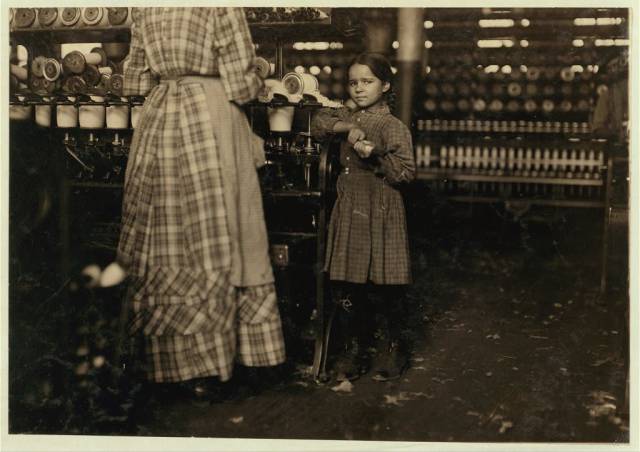 Young cigarmakers at Englahardt & Co., Tampa, Florida. These boys looked under 14. Work was slack and youngsters were not being employed much. Youngsters all smoke. Witness Sara R. Hine. Taken January 1909. 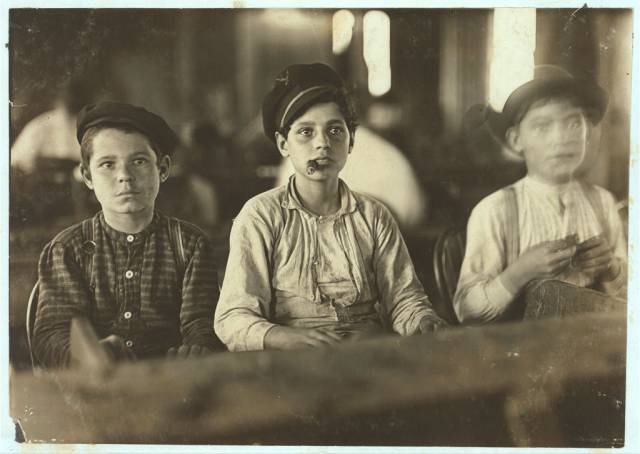 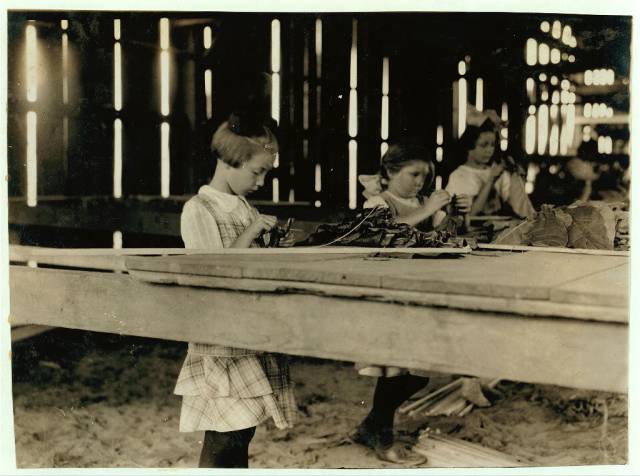 A spinner takes moment's glimpse of the outer world. She said she was 10 years old and had been working over a year. Lincolnton, North Carolina, November 1908. 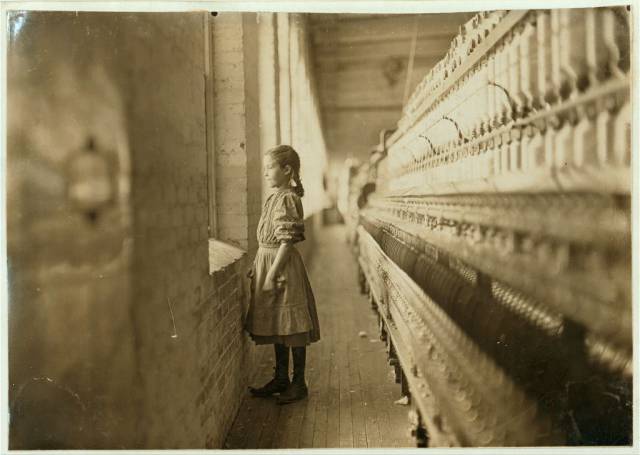 The "Manly art of self-defense" Newsboys' Protective Association, in Cincinnati, Ohio, taken around 1910. 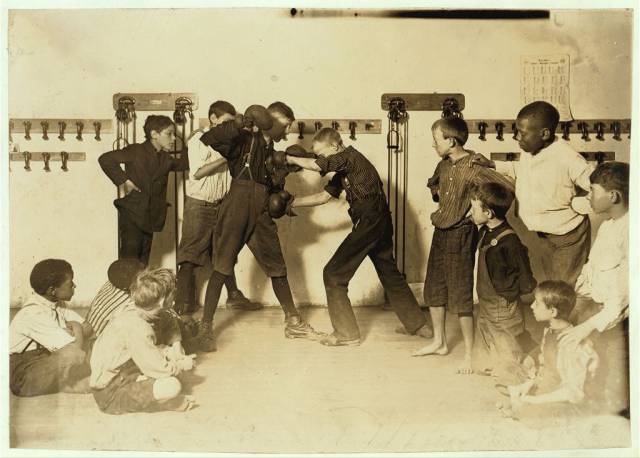 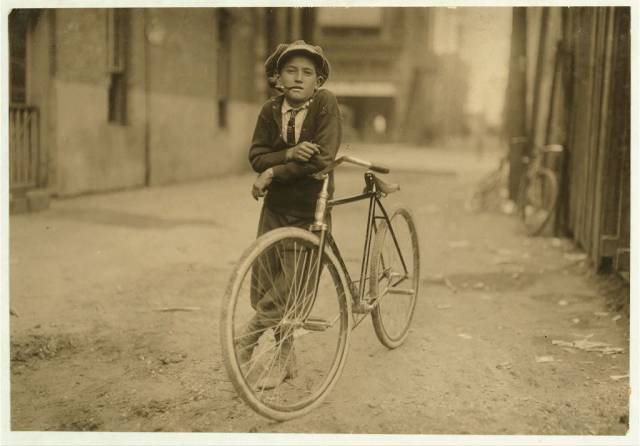 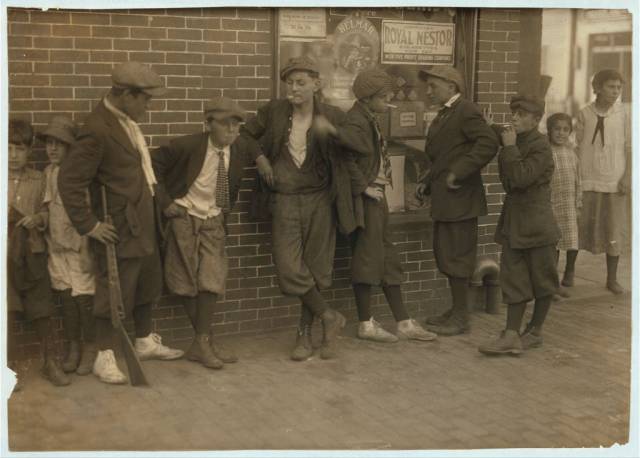 Nan de Gallant, 4 Clark Street, Eastport, Maine, a 9-year-old cartoner, Seacoast Canning Co., Factory No. 2. Packs some with her mother. Mother and two sisters work in factory. One sister has made $7 in one day. During the rush season, the women begin work at 7 a.m., and at times work until midnight. Brother works on boats. The family comes from Perry, Maine, just for the summer months. Work is very irregular. Nan is already a spoiled child. Location: Eastport, Maine, August 1911. 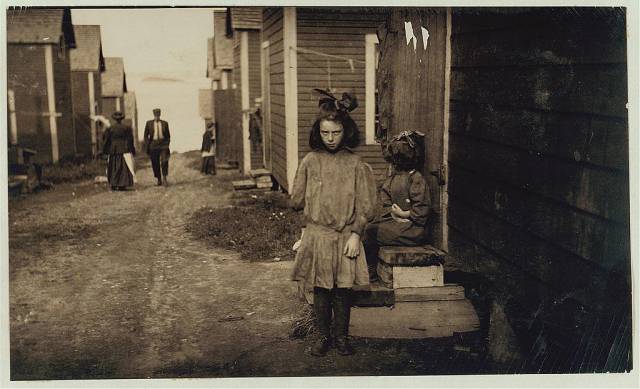 A "colored school" at Anthoston. Census 27, enrollment 12, attendance 7. Teacher expects 19 to be enrolled after work is over. "Tobacco keeps them out and they are short of hands." Location: Henderson County, Kentucky, September 1913. 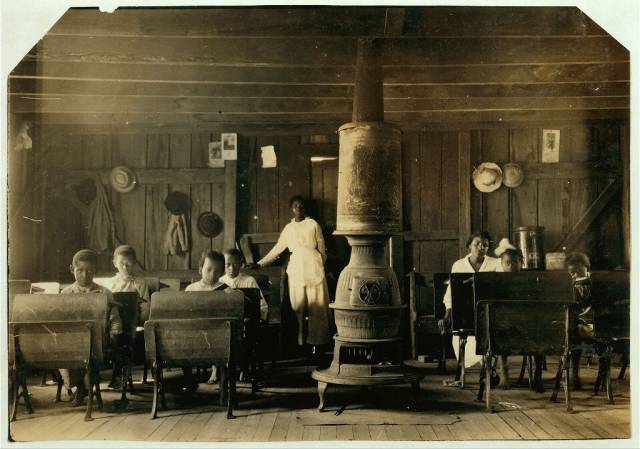 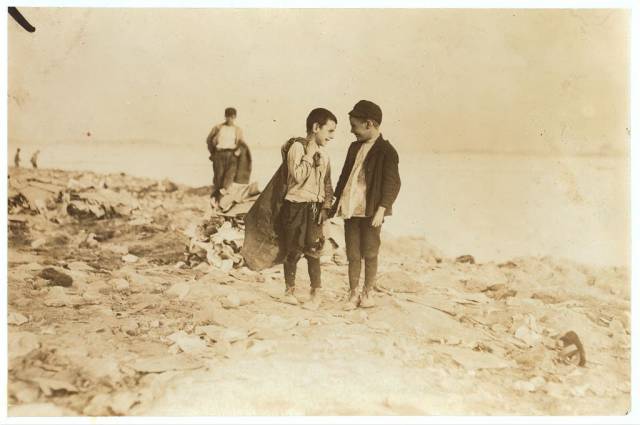