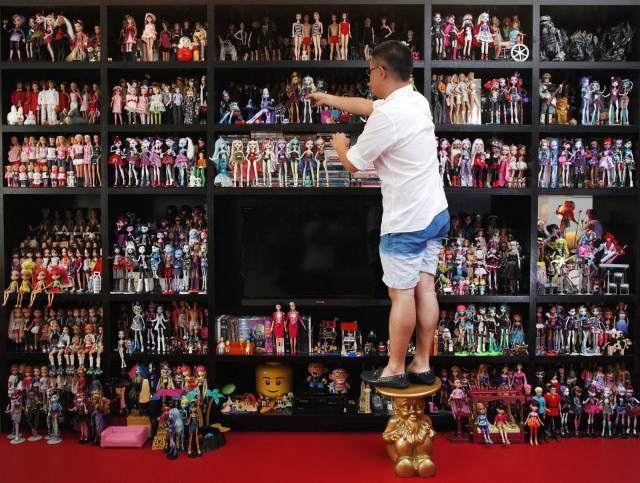 The white exterior and spartan grey staircase of Jian Yang's tidy house gives no hint of the shock that lies within: a pink living room floor and his collection of more than 6,000 Barbie dolls. The 33-year-old Singaporean favors minimalist decor, but the Barbies — and 3,000 dolls of other kinds — dominate three sides of the main room and spill over to fill nine mirrored cabinets in his dressing room and the shelves of his study. 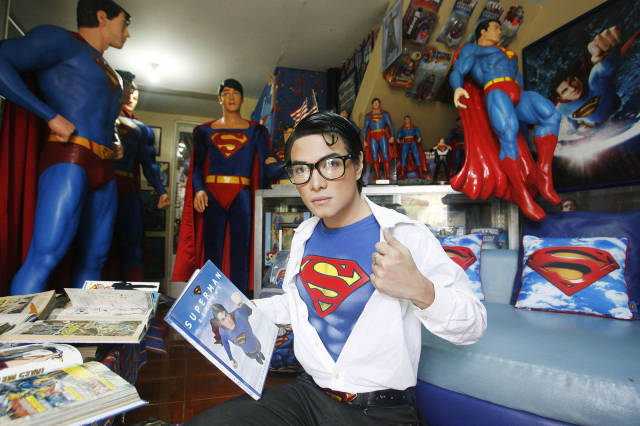 Herbert Chavez poses with his Superman collection inside his house in Calamba Laguna, Philippines. In his idolization of the superhero, Chavez, a self-professed "pageant trainer" who owns two costume stores, has undergone a series of cosmetic surgeries for his face, body, and even his skin color to look more like the "Man of Steel". 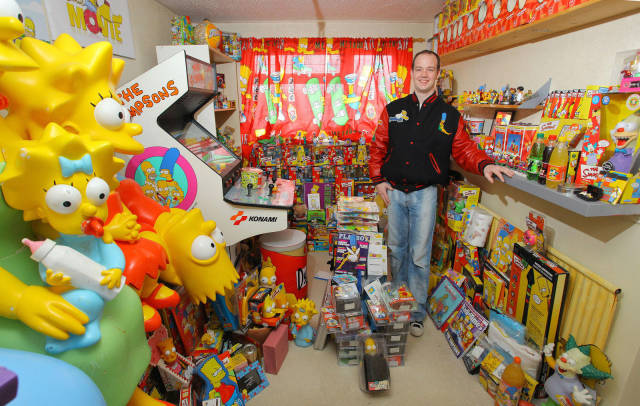 Superfan Glyn Stott of Merthyr Tydfil, Wales, poses with his enormous collection of Simpsons memorabilia. In 2010, Scott attempted to break a world record by watching all 150 hours of every Simpsons episode consecutively. 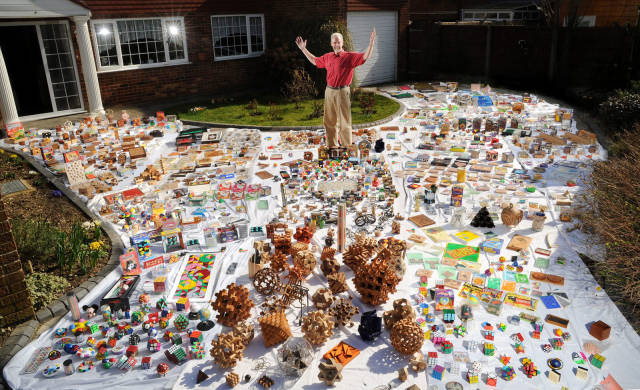 Laurie Brokenshire is such a puzzle fanatic that he has had to build an extension on the side of his home in which to keep his huge collection — all 10,000 brainteasers. Laurie, 56, spent £30,000 building the extra room to house his collection, which includes over 400 variations of the traditional Rubik's Cube. 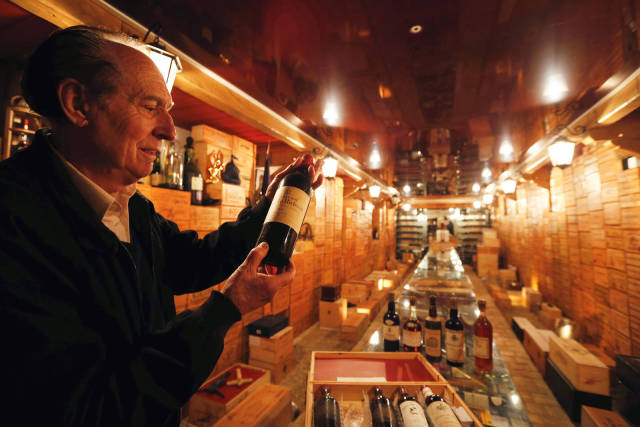 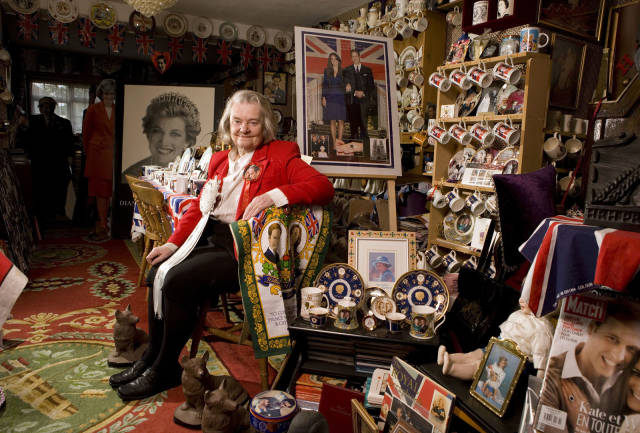 Every single that made the UK charts for over 60 years 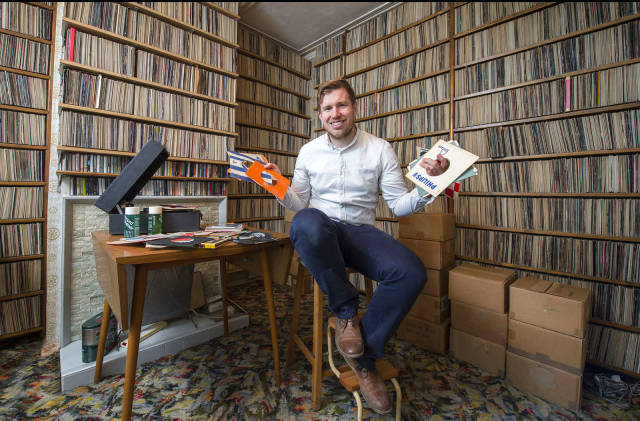 Keith Sivyer of London spent a lifetime collecting every top forty single ever released and after his death relatives discovered his house was packed to the rafters. His younger brother Gerald was then left with the daunting task of unloading his late sibling's treasured possessions. He found around 27,000 seven-inch vinyl singles and 8,000 12-inch singles neatly filed in alphabetical order in floor-to-ceiling shelves that covered the four walls of Mr. Sivyer's lounge. 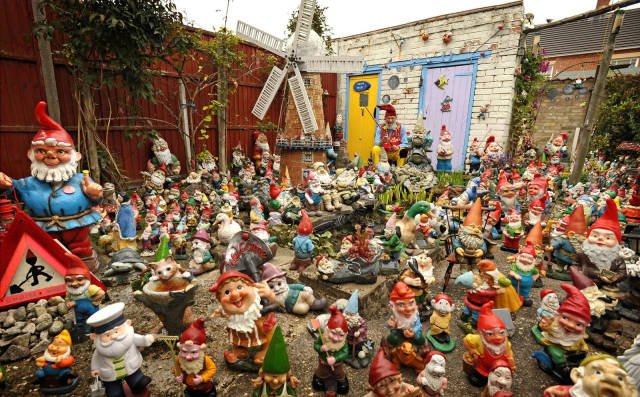 Retired window cleaner Ron Broomfield has turned his cottage into a shrine for gnomes - 1,600 of them. The 77-year-old became obsessed with model dwarves 50 years ago when he bought a small group for his garden. He has since amassed a remarkable collection that is thought to be worth over £40,000. 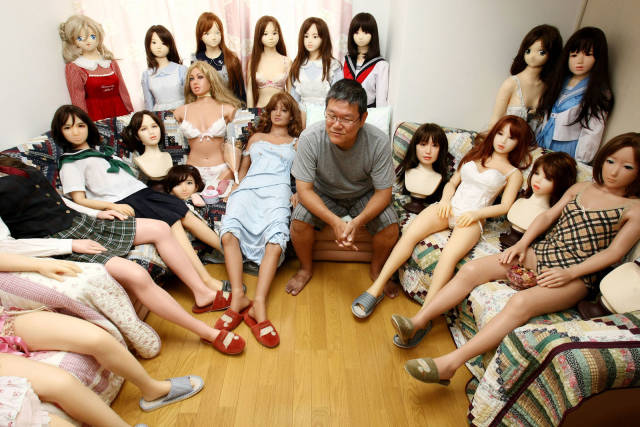 Ta-bo, an avid Love Doll collector, sits with his collection in Tokyo, Japan. The 50-year-old Japanese engineer who rents a special three-bedroom apartment for his Love Dolls, says he owns more than one hundred, which is, to his mind, the world's largest collection of its kind. 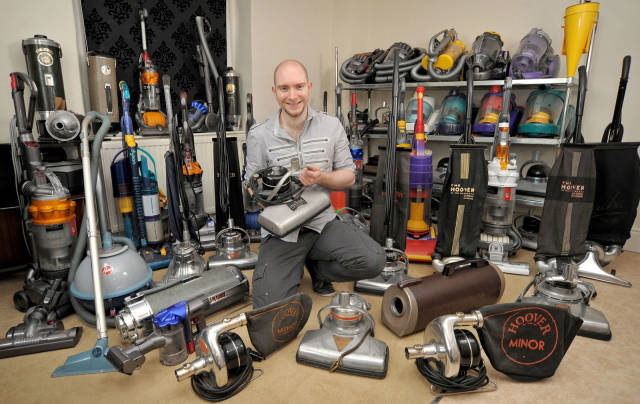 Jack Copp holds his oldest vacuum cleaner, a 1923 Hoover, Model 541. Copp, 24, began collecting the machines when he was just five after overcoming a phobia of them. After having amassed a collection of 120 vacuum cleaners, Copp secured a job working as a customer service assistant at vacuum giant Dyson. 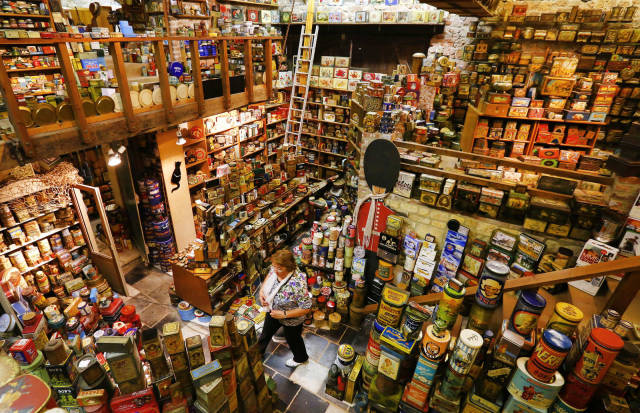 Yvette Dardenne, 75, from Belgium, walks among hundreds of vintage lithographed tin boxes, which are part of a huge collection displayed at her house in Grand-Hallet, Belgium. Dardenne, who currently possesses about 56,800 boxes from around the world, said her passion started 22 years ago when her aunt gave her a decorated chocolate box from the late 1950s. 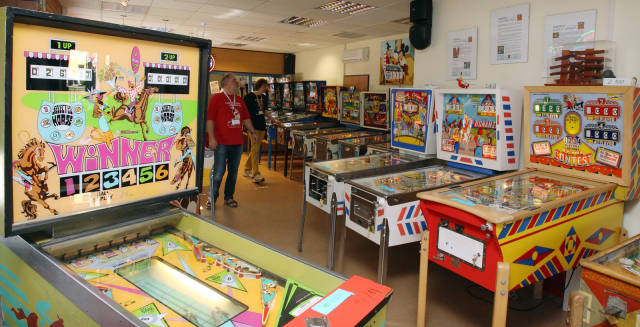 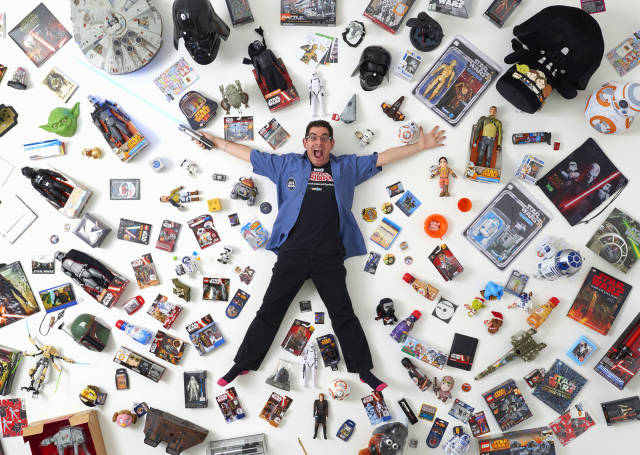 Star Wars collector James Burns, 44, poses with some of his collection in London. He said, "I’ve met so many wonderful people, all over the world. It’s a wonderful community of likeminded people with an interest in Star Wars. There’s nothing else like it." 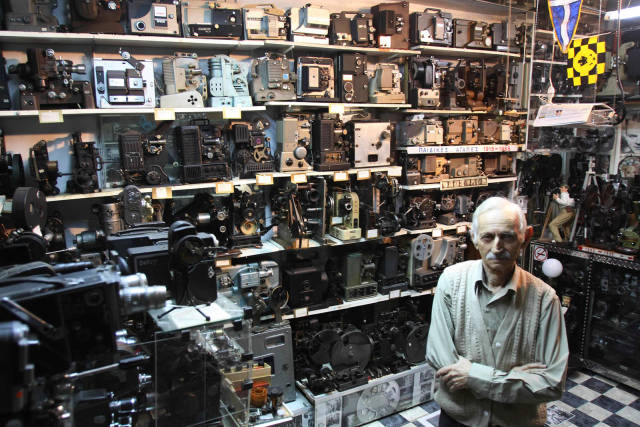 Camera collector Dimitris Pistiolas is seen at his museum in central Athens, Greece. Pistiolas owns the world's largest private collection of movie cameras, 937 vintage models and projectors, making this museum the largest of its kind in the world. 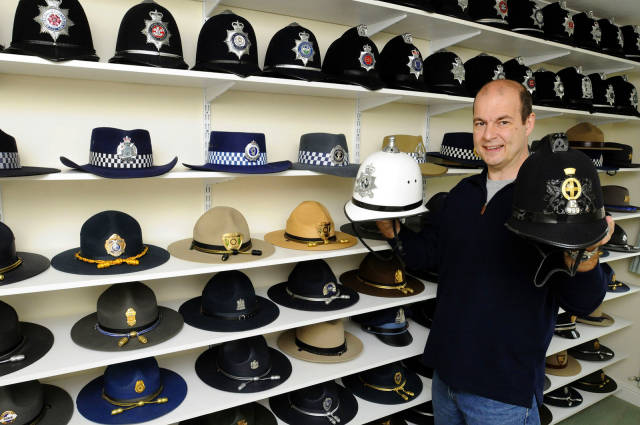 Christian Duckett claims to possess the largest collection of policeman's helmets in the world. Christian, from Camberley, Surrey, has spent the past 20 years collecting more than 500 police hats of all shapes and sizes from forces across the globe. The full-time collector has racked up more than 20,000 miles traveling the globe in pursuit of his hobby. 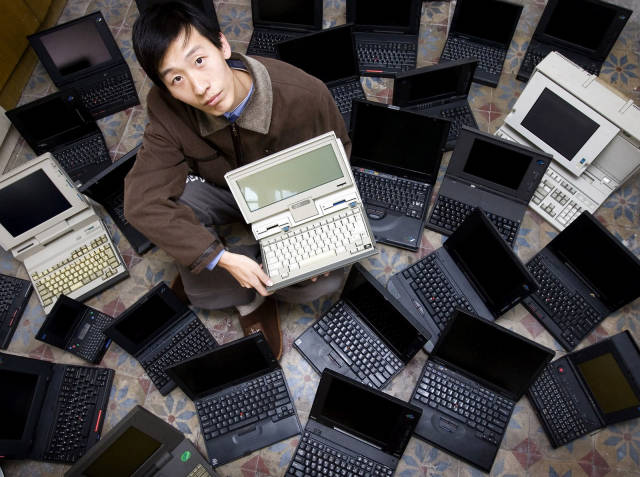 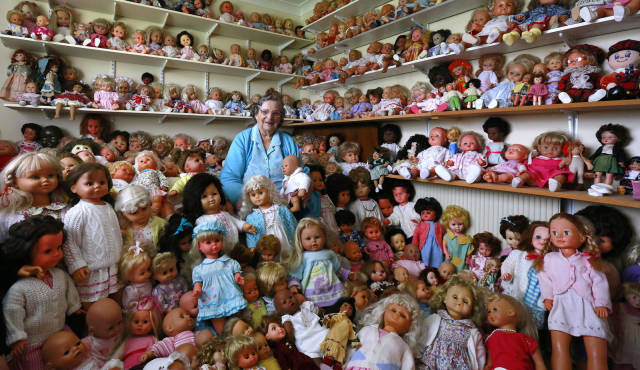 Mary Hickey, 93, poses with her collection of dolls at her home in Ashbourne, Ireland. Hickey has been collecting the dolls for over thirty years and now owns over 420 dolls. 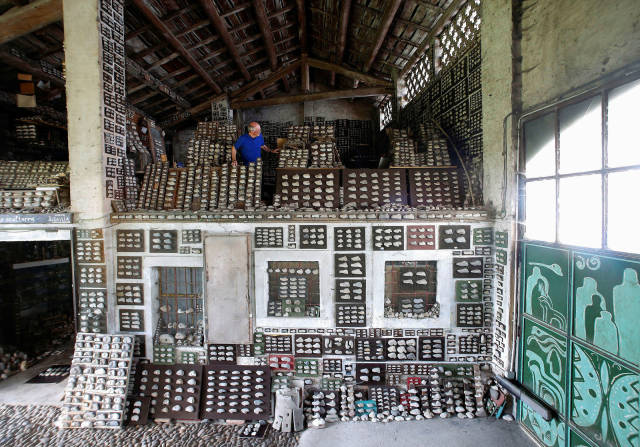 Stone collector Luigi Lineri, 79, walks through his stone collection, sourced from the Adige river, at his home workshop in Zevio, near Verona, Italy. 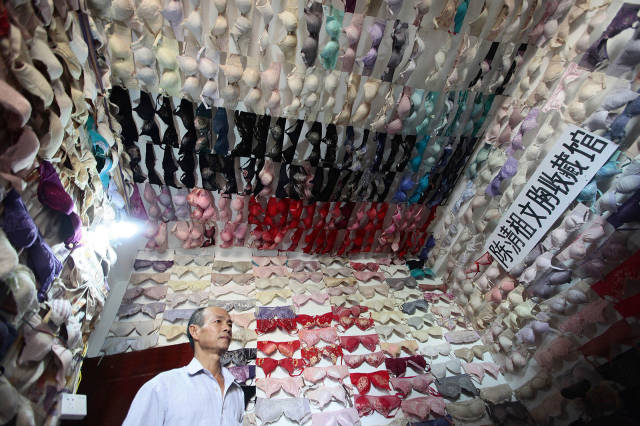 Chen Qingzu, 56, stands in a small room with the walls and ceiling covered in bras he collected, in Sanya, China. Chen has collected about 5,000 bras over 20 years after touring more than 30 different colleges around the country for public benefit activities aiming to raise awareness of breast cancer. 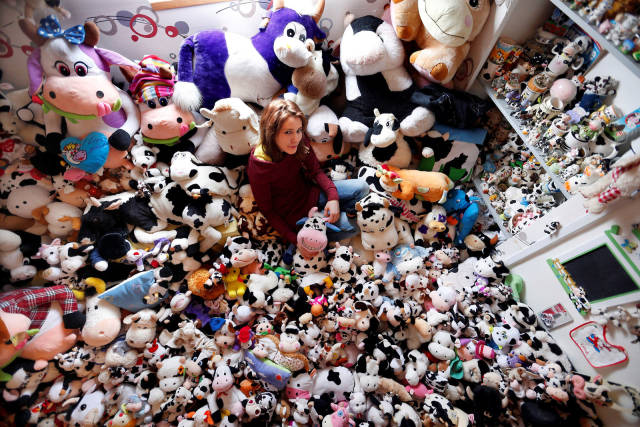 French Model Emeline Duhautoy poses with her collection of 1,679 stuffed toy cows she has been collecting for over seven years at her home in Saint-Omer, France.