This Family Might Be Making The Best Christmas Cards! (15 pics) 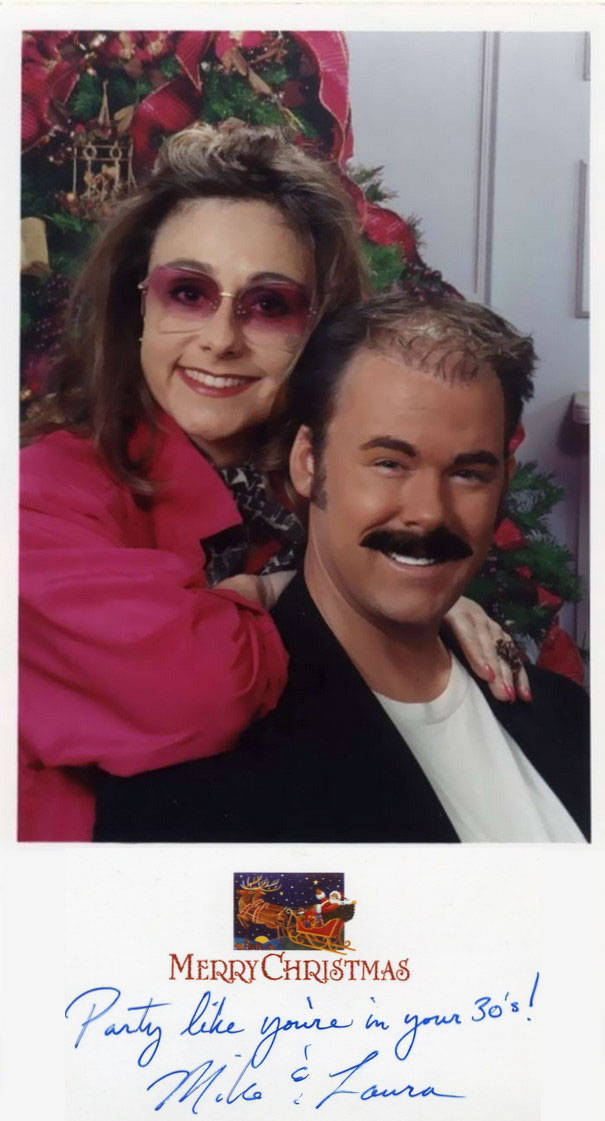 Our first card! The original concept was “Plugs & Juggs”, but we had to choose this photo because of the priceless facial expressions, even though you can’t see Laura’s overly-augmented rack. Thus, we call this “Forty & Fighting It”. The photographer tried to move the light away from overhead and I had to ask her to shine it directly down on me – she didn’t know how to tell me that it was reflecting off of my head and making me look like I was balding. Finally, I just told her that the balding look was what I was after. She had no idea that we were dressed up in costumes! 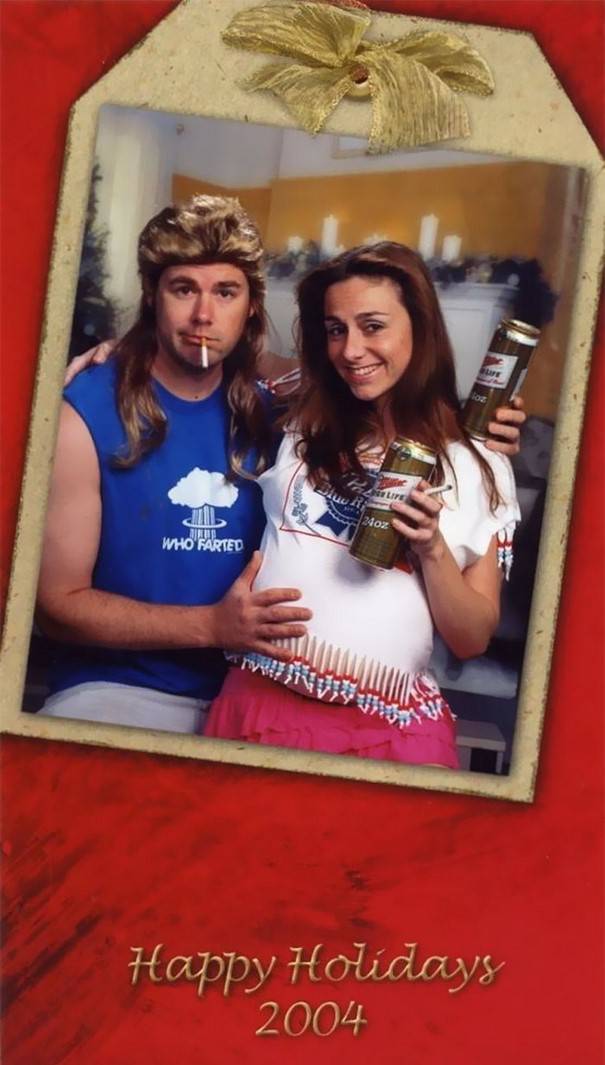 When I went to the JC Penney Portrait Studio to pick-up our cards, they were very busy with the holiday rush and the manager (who was also the cashier) was clearly stressed-out, answering phones, organizing photo sittings, delegating to her employees and systematically trying to work through the line at the cash register. After patiently waiting for about 10 minutes, it was my turn to be helped and she immediately went into sales mode, taking control of the transaction and regurgitating her customer service talk track in a frenzy, multitasking all-the-while, mind you, and not able to really give me her full attention.

Her – “Welcome to JC Penney Portrait Studio, how can I help you today, sir?”

Me – “It’s Bergeron, but I have my receipt right here, if that helps.”

Her – “Okay…well, I see that your wife is pregnant…I hope you will be coming back to JC Penney to take your baby pictures.”

Me (smiling at the realization that she doesn’t get the joke) – “Actually, she’s not really pregnant…and if she was, I wouldn’t let her drink beer or smoke cigarettes…and, as you can see, I don’t really have a mullet. Its a joke card.”

In the midst of what was utter chaos for her at that moment, she just sort of stared at me in bewilderment as the cashier next to her stopped what he was doing, leaned over to look at the card and said to me with pure and utter excitement, “Dude, that’s awesome!”

Me – “Thanks. Merry Christmas!”

As I took my cards and walked away, the manager stood there in absolute confusion, her brain apparently frozen with the realization that her sales training had failed to prepare her for this situation. 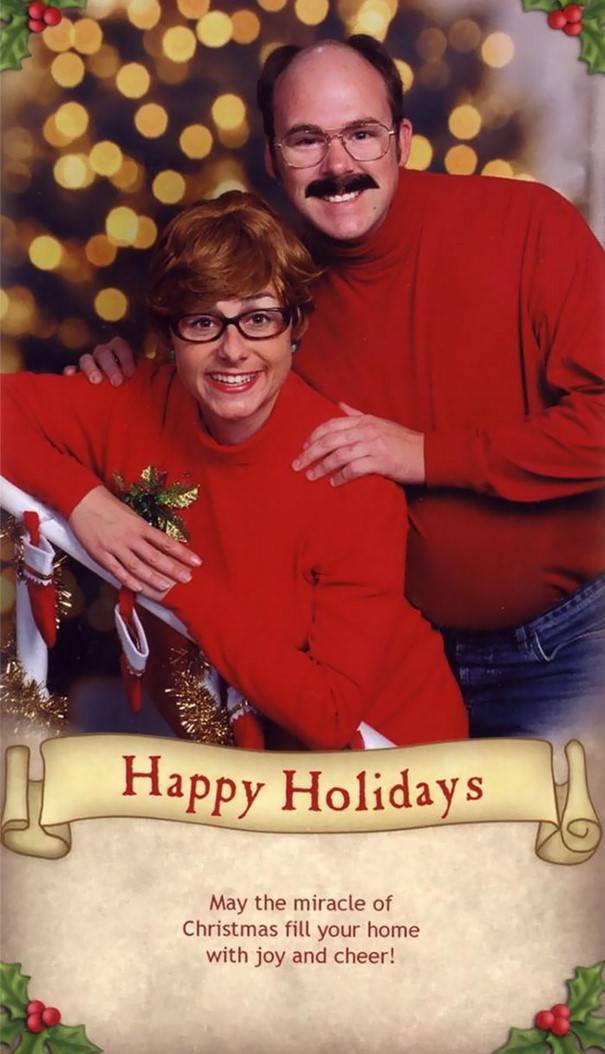 Being a Bergeron, I have always known that I would eventually lose my hair. We are trained from birth to accept the fact that someday our hair will fall out. At the age of 32, it was apparent to me that my days were numbered and if I wanted to make fun of being bald, then this would likely be my last chance before the joke would become reality. So, on the afternoon of the photo shoot, I had Laura shave the hair off of the top of my head…and I’ve been bald ever since. The thing is, I had to walk around with a bald head for a couple of weeks while the holiday card was processing and shipping, but I didn’t want to give anyone any hints about what the card might be. So, when people would ask me why I suddenly shaved all of the hair off of my head, I would give them some made-up excuse like, “I joined a cult” or, “I’m a racist” or, “Chicks really seem to like that Vin Diesel guy, so I thought I’d give it a shot.” Incidentally, one of the other excuses I would give was, “I’m a competitive swimmer and I wanted to shave some time off my laps.” A few years later, I was bartending and my friend Kristine came in with one of her girlfriends. We chatted a bit and I mixed them up some special shots and then Kristine got up to go to the restroom and her friend says to me, “So, Kristine tells me you’re a swimmer.” Now the question is: How many people are out there who still believe I really joined a cult? 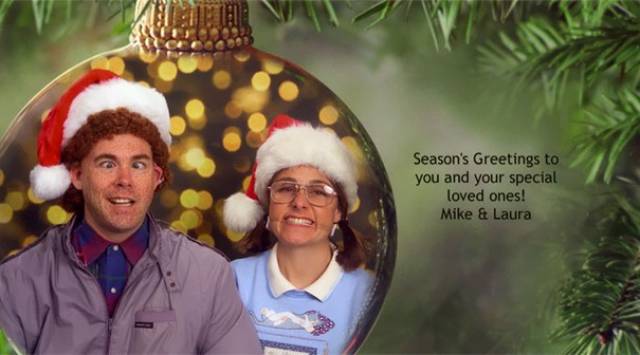 A couple of years before we started this tradition, my friend, Jeremy, worked during the holidays in a photo studio.  If he thought that a family portrait was particularly funny, he would print a copy for himself and put it on display in his living room.  They were all awkward and wonderful in their own way, but there was one photo in particular that was so delightfully goofy and uncomfortable that it has always stuck with me.  This card is an effort to recreate the magic of that card.  I’ll be the first to admit that we fall terribly short, but I think it still manages to bring some joy to the holiday season! 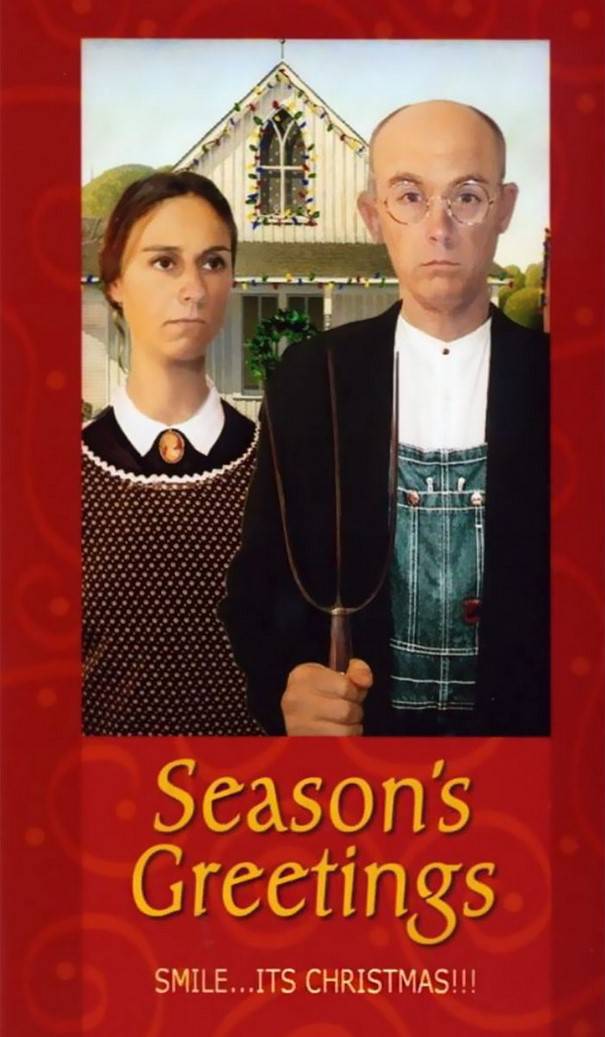 Overshadowed by controversy, some “purists” have accused us of cheating with this particular card because we Photoshopped it.  For those who love it, thanks…we love you, too. For those who feel we cheated…look, we actually dressed-up in costumes and took a photograph for this card (we even bought a pitchfork!). However, since the original work was done with paint on canvas and did not look like a real-life photo, we felt it would be a better choice to manipulate our photo to look like the painting. Since neither Laura nor I are graphic designers, it was quite difficult and time-consuming, but we are very pleased with the way it came out. Anyone who thinks we took the easy way out on this one is simply oblivious to the effort it required. By the way, this was Laura’s departed grandmother’s favorite out of all of our cards. Oh, and for those of you who have suggested that the guy looks nothing like me, just wait until my relatives on my dad’s side view this post and they all chime-in about how I look exactly like my Grandpa Bergeron. In short, suck it, haters! 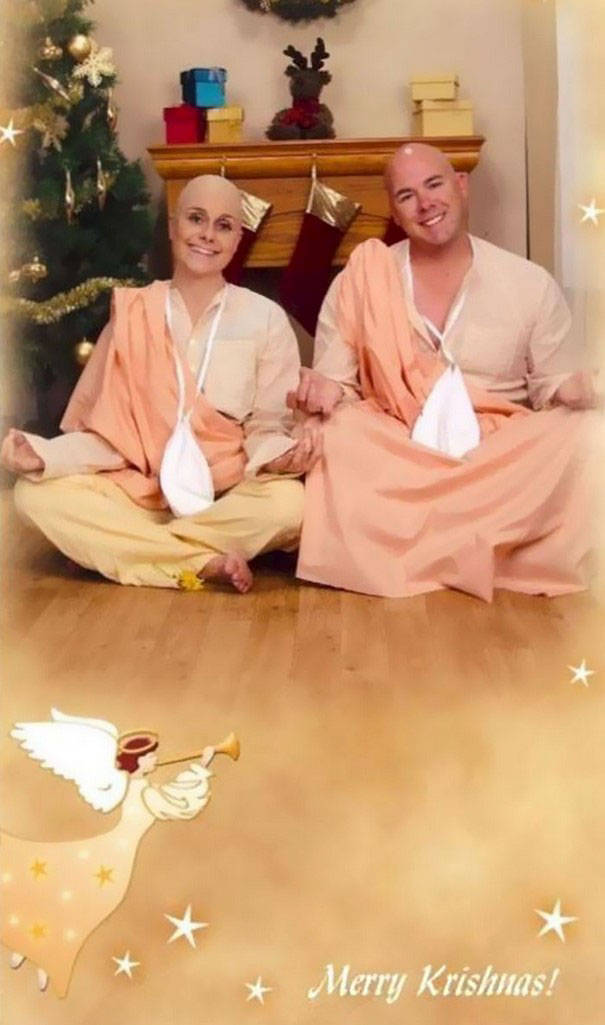 We got started a little late this year, which meant that when we went to JC Penney to take our picture, there was a one hour wait. We walked through the mall and wound up eating dinner in the food court. I only wish that we had brought flowers. 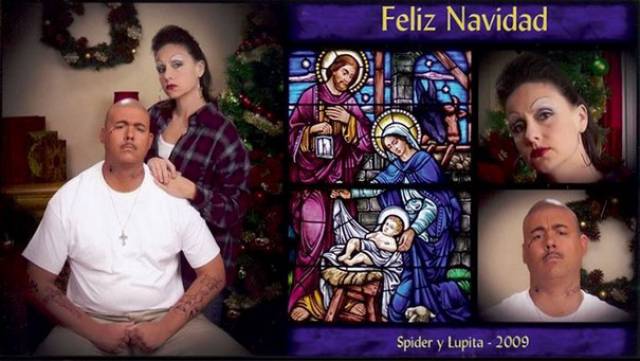 This is my personal favorite. Some cards are obviously a joke, but when a card looks as real as this one, it is something special. Again, on this particular year, we weren’t able to take the picture until after Thanksgiving, so the JC Penney photo studio was very busy and we had to wait for an hour to get in. Understandably so, Laura was nervous about walking around the Westminster Mall looking like we did, but I reassured her by saying, “Seriously? Look at us…nobody is going to fuck with us!” I was right…not a single person would even make eye contact with us. 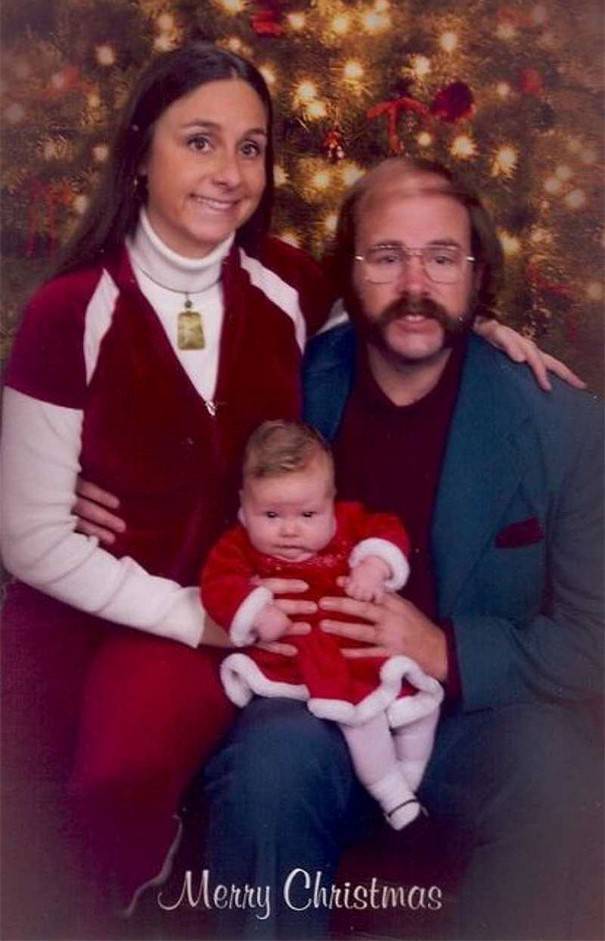 May your holiday table be a smorgasbord of cheese balls, fruitcakes, and hams!  In many ways, this card best represents what we were trying to achieve from the very beginning. Our concept was inspired by the inherently awkward nature of holiday family photos that has now become so popular in the age of the internet. We wanted to try to capture that awkwardness (in a next level sort of way) and give everyone we know the gift of having a funny card on their fridge that would capture the spirit of the holiday season. When they had people over to their house during the holidays, they could take pleasure in seeing their guests’ reactions upon viewing the card without realizing it was a joke. On a side note, as a bald man who has known his entire life that he would grow up to be bald, it had been a longtime aspiration of mine to sport a combover at some point because they are so fascinating in their ridiculousness! So, this particular card allowed me to not only fulfill a lifelong dream, but also to capture it in all of its glory for the ages. 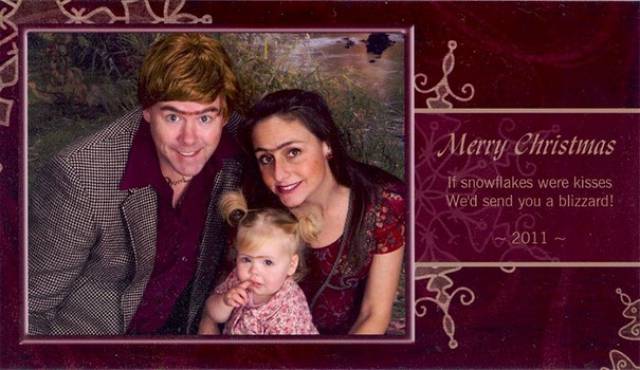 I love the idea for this picture, but personally, I think it could’ve been better executed. Don’t get me wrong, we look funny & Gigi really gives the card a whole other dynamic with her incredible cuteness, but I think this concept had the potential to be our best card ever, if we had done it right. 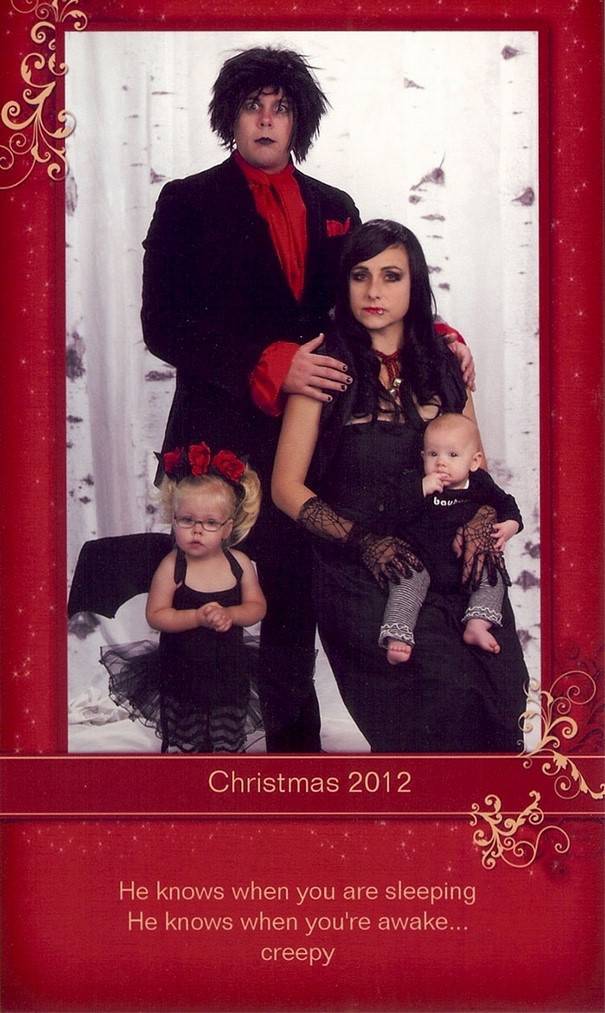 This is your legacy, girls…embrace it! 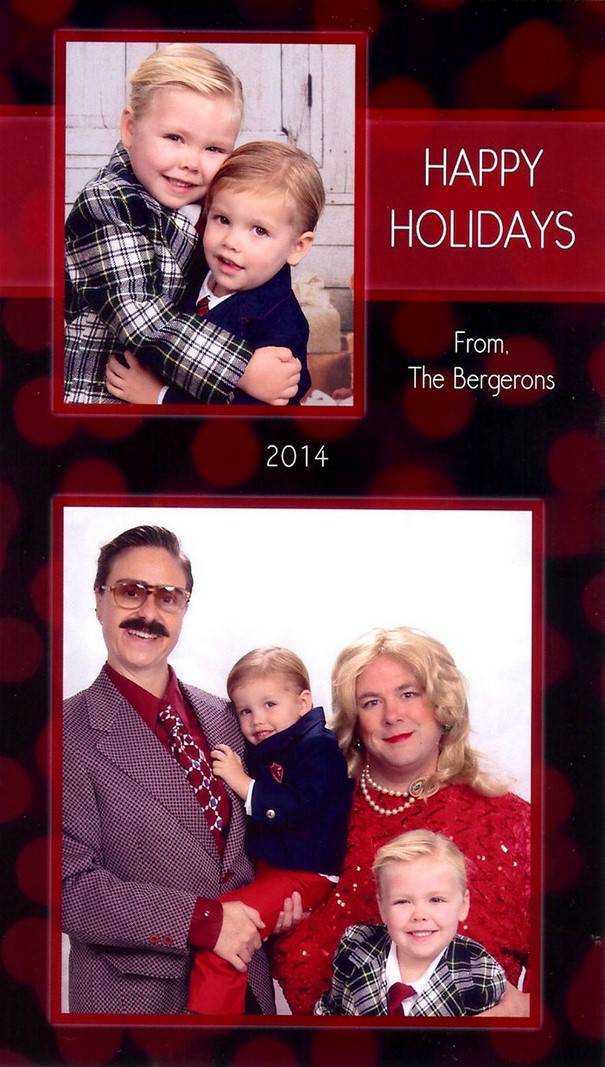 I doubt if anyone at the JC Penney Portrait Studio even thought twice about Laura and the girls, but it was a pretty busy year and we were waiting for about 45 minutes for the photographer to be available, so I am certain that my presence made a lot of people uncomfortable in the studio’s waiting area. I had to hunt high and low for shoes that would fit me (thanks Lane Bryant) and, of course, I shaved my legs, so you can imagine how excited I was that we wound up choosing a shot from the waist up. And, seriously, how friggin’ cute are those boys? If we had given Gigi glasses, I think she would’ve looked an awful lot like Ralphie! 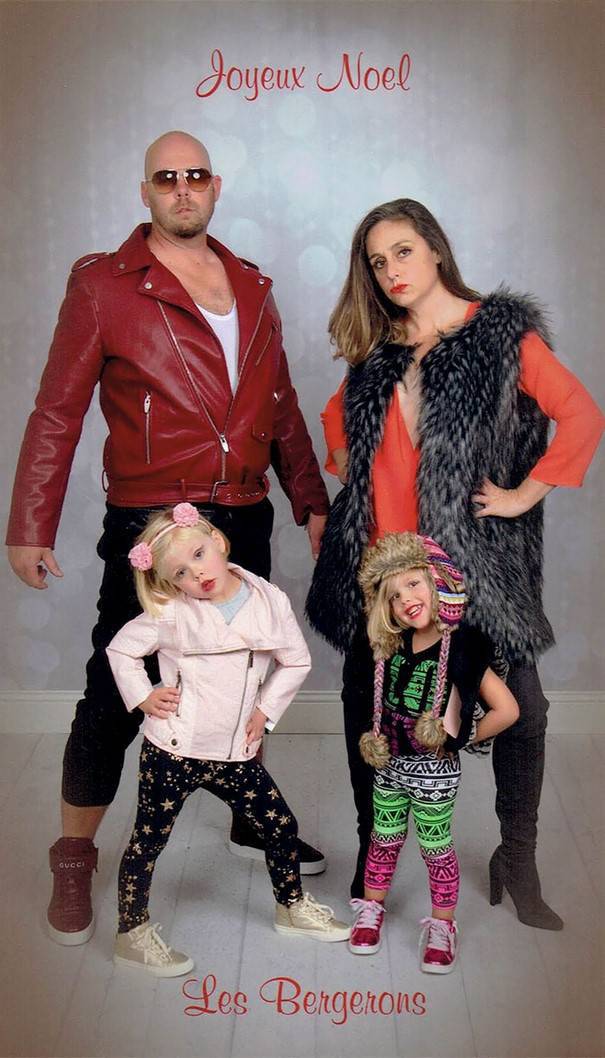 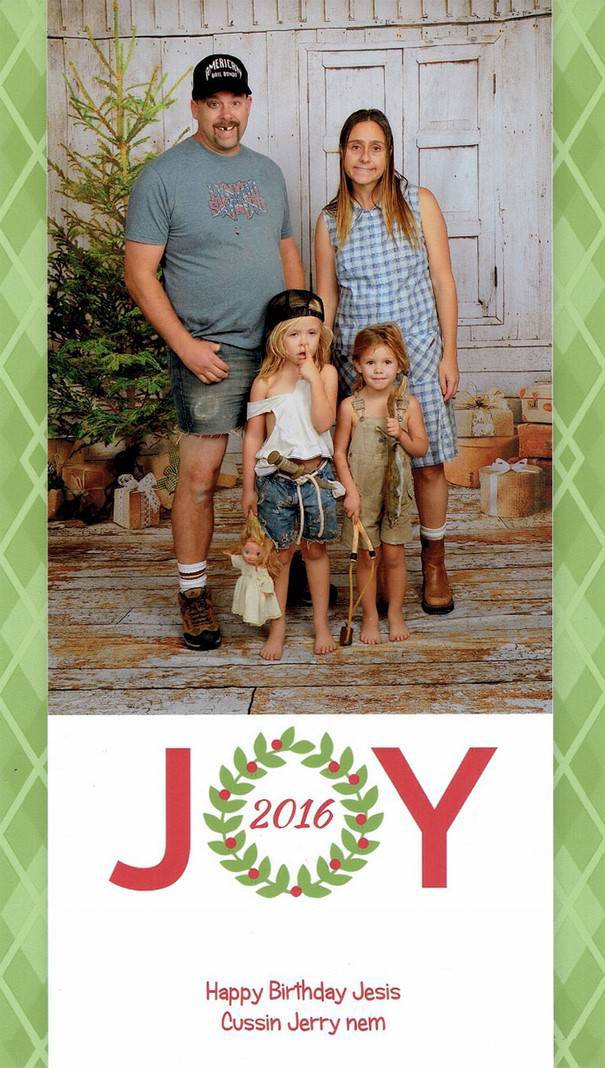 A little over a year ago, Gigi started calling me “Cousin Jerry.” It caught on with her little sister and, after a while, I started talking to them as I imagined Cousin Jerry would. Since then, he has become a regular visitor in our household, so it seemed fitting to share him with all of you this holiday season. If y’all are lucky, you may get to see “Creepy Larry” (another Gigi-inspired character) and his family in a future card…we’ll just have to see. Side note…and I feel like I say this every year, but…look at Gigi bringing it!!! 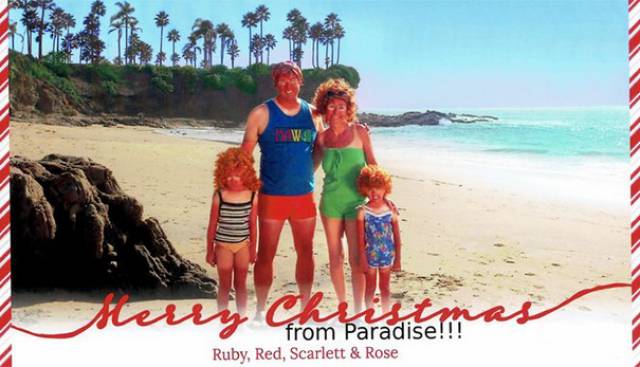 We went in a slightly different direction this year, which required stepping out of the JCP Portrait Studio and using a photographer (big thanks to Marco Montenegro) at the local beach. This our nod to the ever-so-popular holiday card theme that says “Look at us soaking up the sun’s rays in a beautiful tropical paradise while you’re freezing your nuts off…don’t you wish you were us?”