US Is Full Of Scary Abandoned Amusement Parks… (16 pics)

There’s a reason why this amusement park is abandoned; because it’s cursed. This plot of land had the dual history of being both the scene of a pioneer massacre in 1783 and a Native American burial ground. Ignoring that history, an amusement park was built in 1926 to cater to the families of local coal workers. There was a carnival, water rides, a dance hall and concession stands.

However, the land wasn’t done. After two kids died, the park was closed in 1966, and sat idle until 1985, when the site was purchased and the park was reopened. It lasted 3 years and was abandoned. 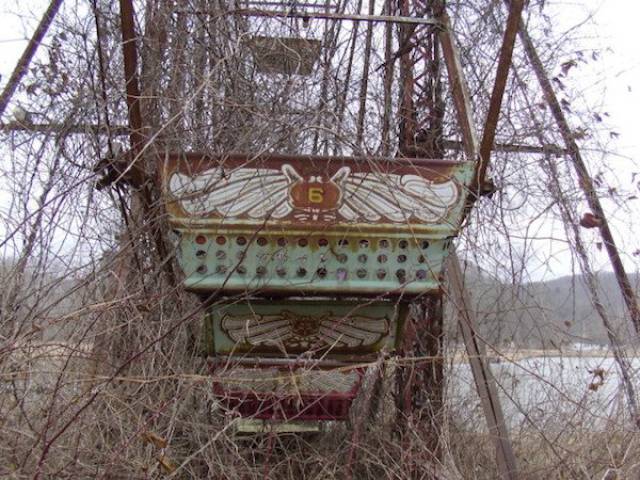 Someone had the brilliant idea of creating an attraction that replicated the Bethlehem and Jerusalem of the Biblical era, with various scenes from the Bible recreated throughout. Construction began in 1955, and in the 60’s and 70’s, saw over 40,000 visitors annually.

The park was closed for renovation in 1984, but when the owner died, the park fell into disrepair. Since then, attempts have been made to revitalize it, but due to liability reasons, the park’s remained closed. Faithful pilgrims, still try to find their way in, however. As recently as 2013, a new cross was erected, with plans to update the site. 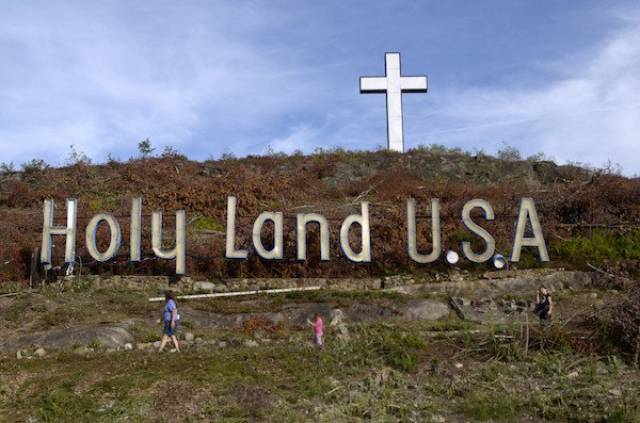 After Hurricane Katrina rolled through Louisiana in 2005, the landscape of the state was never the same. Originally known as Jazzland, this amusement park sat in a low-lying section of Eastern New Orleans and was completely flooded. Due to the damage from the salt water and wind, over 80% of the rides were too damaged to function. The park was locked up and abandoned and sits that way today.

There have been plenty of proposals to revitalize the site, but for now, it’s used as a filming location and his highly guarded by New Orleans Police against trespassers. 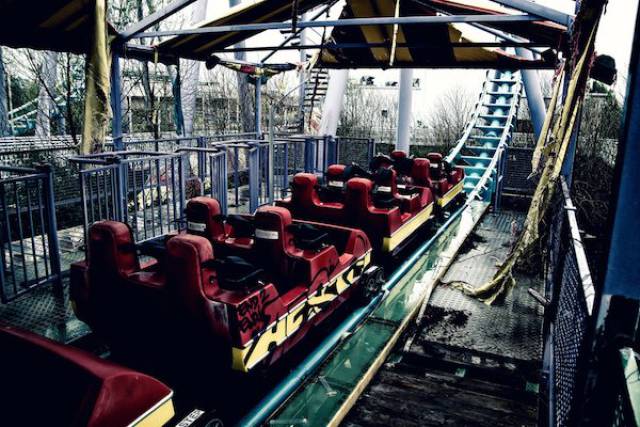 Easily one of the oldest attractions in the US, Chippewa Lake Park was established in 1878 and closed 100 years later. Known for its thrilling wooden roller coasters, it was incredibly popular in the early part of the century, but by the 60’s, attendance dwindled and the park was closed on its 100th anniversary.

The site has been subject to development rumours, and some structures have burned down and/or been taken down, but the majority of the park has been reclaimed by nature. 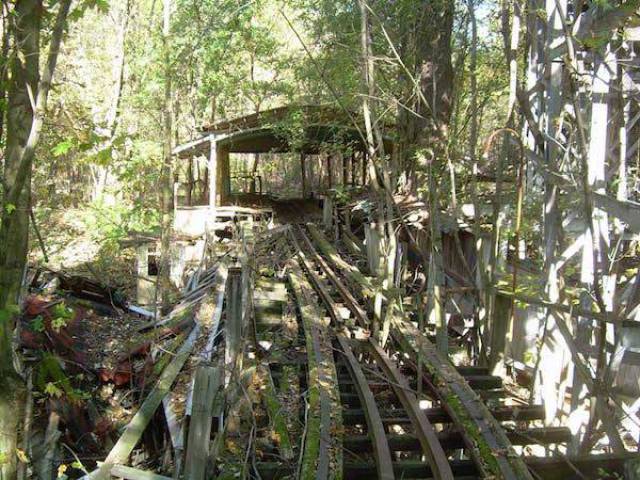 Did you know there were abandoned Disney parks throughout Florida? Disney’s River Country was a waterpark that was created in the aesthetic of Tom Sawyer and Huck Finn. Opening in 1976, the waterpark relied on local, filtered water for it’s pools and slides, as well as sandy bottomed pools.

Whether it was the death of a boy in 1980 from microbes found in the local, Florida water, the logistics of keeping this ‘authentic’ waterpark open, or 9/11, the park was closed and abandoned in the winter of 2001. Now it just a creepy and empty park. 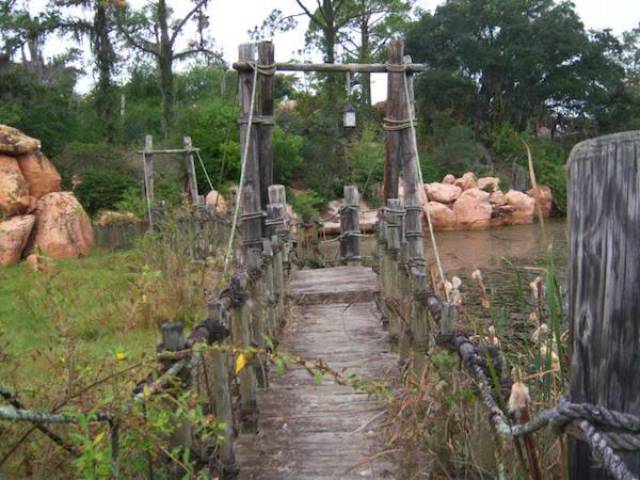 The Land of Oz

This park was in operation from 1970 to 1980, then it closed, due to the death of the owner, commercial issues and lack of attendance.

In the 90’s, parts of the park were revitalized and they host various “Wizard of Oz” weekends. 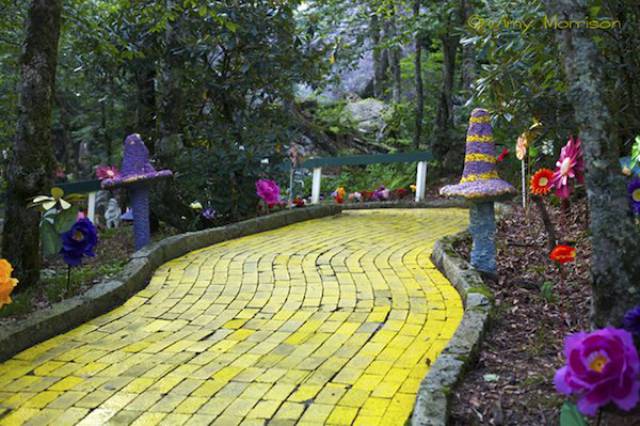 In 1963 a coaster called the Starliner was the first roller coaster built in Florida. Soon, an amusement park was built around it. Siting right across the beach, it was a popular destination up until the 2000s, when the area became less family friendly, due to its popularity during spring break. 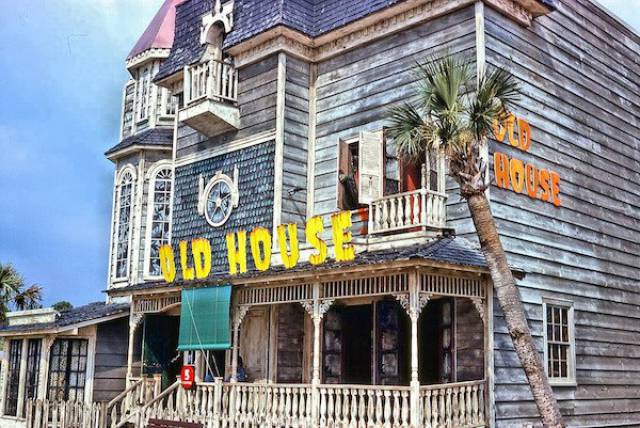 This is probably the only roadside attraction in the US with a hillbilly theme. The main attraction of this park was that you could hit up the trout pond and catch, clean and pack your own fish. When it opened in 1968, most of the rides were based on the Li’l Abner comic strip.

Between weather issues, attendance and the sustainability of an amusement park based on an obscure comic, the park suffered through the 70’s. It got some corporate money in the 80’s, and had a resurgence, but ended up closed and abandoned by 2005. 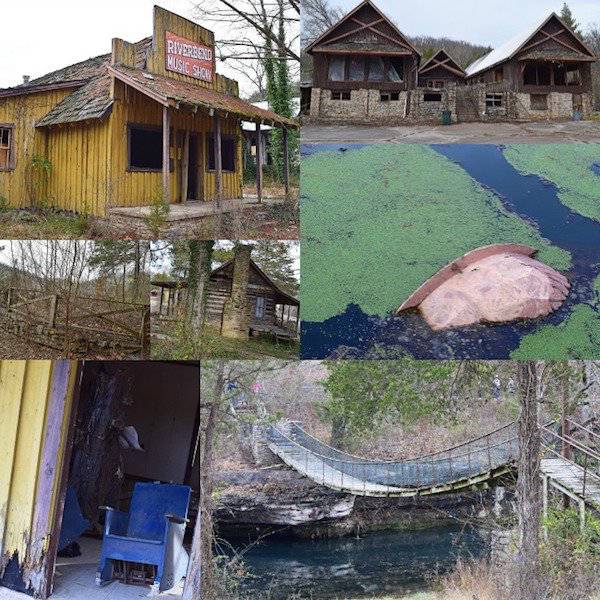 There’s a couple of things wrong here. Naming a town in Arizona after Santa Claus is the first thing. Then trying to make a resort subdivision with a Christmas theme was the next. Starting in the 60’s, land developers opened a sales office and tried to sell the idea. An Inn was built, with hopes to have a year round Santa, and streets named after reindeer.

By 1988, the idea and the buildings were abandoned. 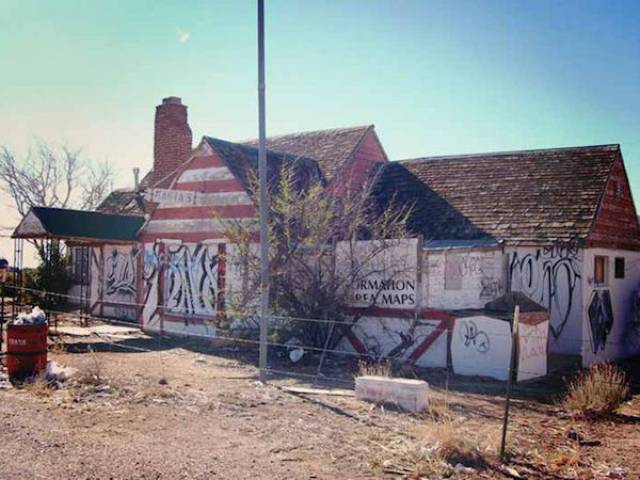 In operation for 55 years, from 1949 to 2004, this was one of the largest theme parks in central Kansas. Known for its wooden roller coaster and Whacky Shack, it was incredibly popular.

In 2004, it was closed to effect repairs and safety upgrades, which ended up being more costly than anticipated. It never opened again, and is now due to be demolished after 13 years of neglect. 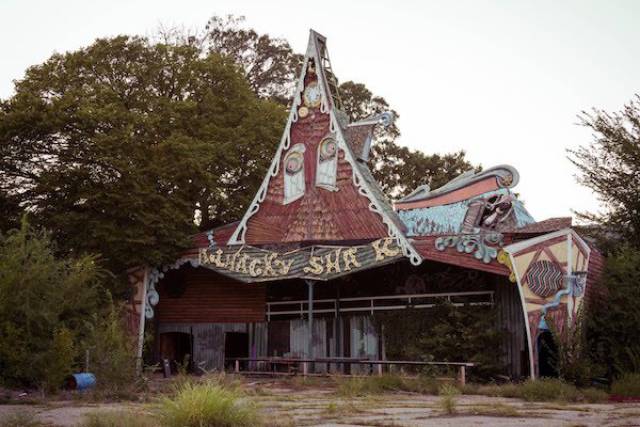 Built over 72 acres as a replica of the country, this was an experiment in creating a new kind of amusement park. Open from 1993 to 2003, this was funded by the Chinese government and was a series of miniature models of Chinese landmarks, with shows and acrobats.

A lot of workers and performers, however, defected to the US and as it turns out, not a lot of people really wanted to see miniatures of Chinese buildings. 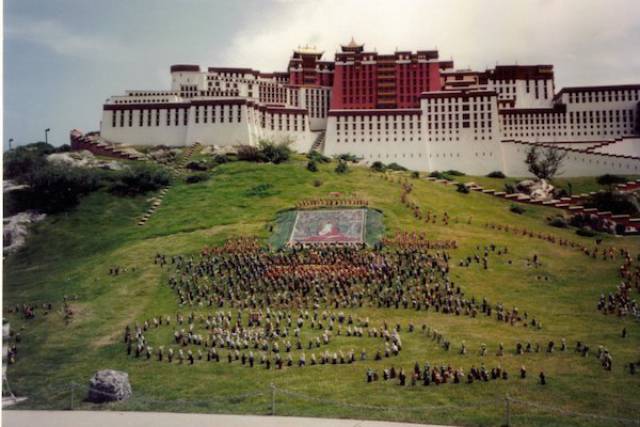 This was a 52 acre Christian theme park developed by televangelists Jim and Tammy Faye Bakker in 1978. It was the third most successful tourist trap in the US, next to Walt Disney World and Disneyland.

After getting their tax exemption status revoked by the IRS, as well as a sex scandal in 1987 caused the popularity to wane and the park was closed and abandoned by 1989. 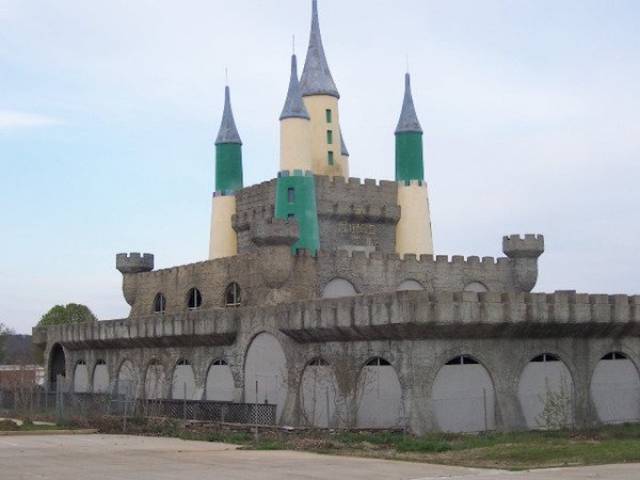 This is probably one of the creepiest abandoned roadside parks in the US. The entire park is overgrown by weeds and sits behind a barely-trafficked strip mall. Opened in 1955, it had a nursery rhyme theme, and saw over 300,000 kids every summer at it’s peak. When the park was sold to new owners, they closed it to renovate and update in 1995. 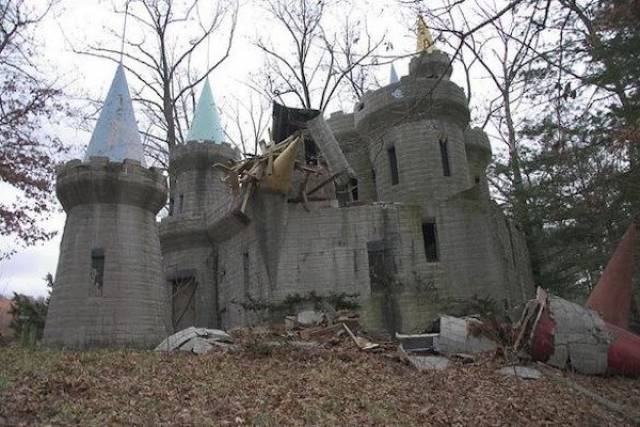 This theme park in Irish Hills opened to great fanfare in 1963, with a prehistoric dinosaur theme. At one point, this park had a waterfall, a smoking volcano and a waterslide.

Somehow, by 1999 the park was closed and left to ruin, but there’s not a lot of information as to why. 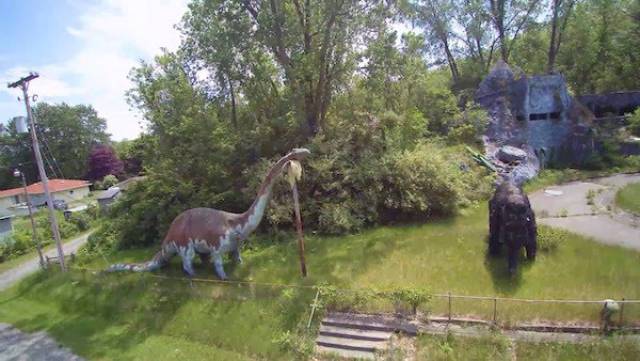 Also known as Americana Amusement park, this one opened in 1922 as a picnic and vacation area, and slowly became an amusement park throughout the 50’s. By the 60’s and 70’s they were killing it.

The recession in the 80’s put a damper on things and in 1990 and electrical fire caused $5 million in damages and that was it. They limped their way along to 2003, then the park was abandoned. 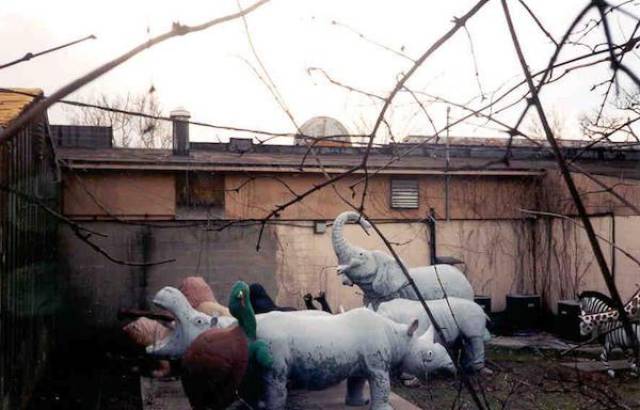 Also known as Rock-A-Hoola Water Park, this amusement park is located smack dab in the middle of the Mojave Desert. Originally constructed by a local businessman for his family in the 1950’s, it eventually expanded in to a proper waterpark. It was well attended throughout the 70’s and 80’s, but by the 90’s, attendance was down.

By 2004, the park was closed and left to the elements. 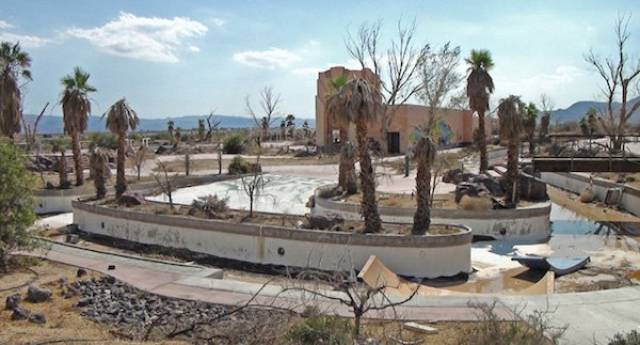