A Fabergé egg bought at a market
1 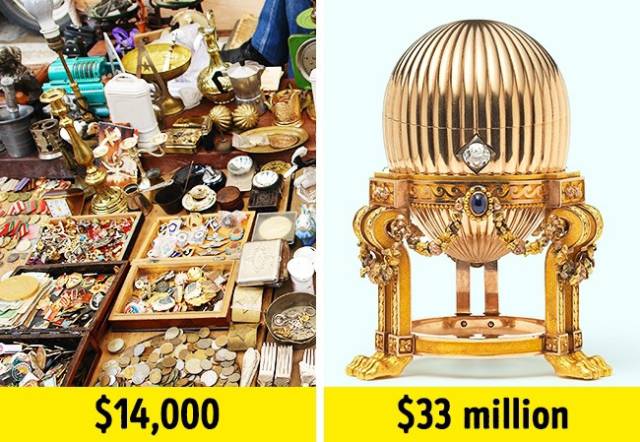 An American man bought a metal egg with pearl pieces and a clock inside. He paid $14,000 and wanted to resell the item for a higher price, but no one wanted the egg with a clock.

So the man decided to learn the history of his purchase. He noticed a Vacheron Constantin symbol, searched on Google, and found a Fabergé expert’s article. When the man brought the egg to professional appraisers, he finally knew its history.

The egg turned out to be an Easter egg that Alexander III, Emperor of Russia, ordered for his wife in 1887. No one knows how the egg got to the USA, but the curious American who became $33 million richer after selling it probably doesn’t care! 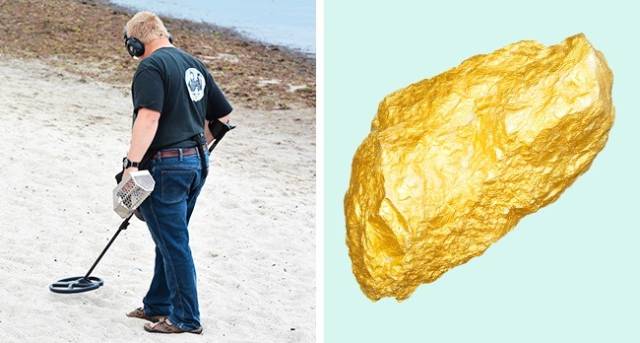 An amateur gold digger was walking on the beach near Ballarat (Australia) and found a strange object under the sand. At first, he thought it was a car scrap, but when he started digging he realized that it was gold. And this golden object became bigger and bigger with every move.

When the lucky gold digger brought this piece of metal to appraisers, he found out that its weight was 11.5 lb (5.5 kg). It was one of the biggest nuggets ever found in that area.

It was valued at more than $300,000, which was enough to cover the metal detector and other equipment expenses, and the enthusiast became really rich. 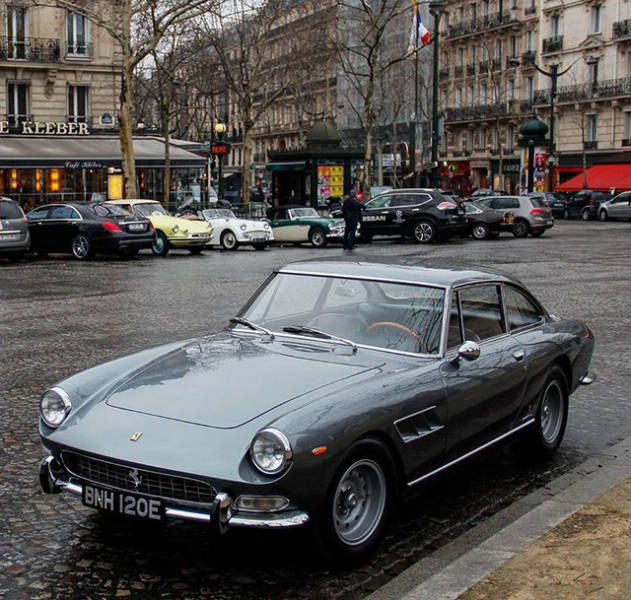 In Wyoming, a man purchased a house that cost $285,500. There was a garage attached, but it didn’t attract the attention of the buyer or the realtor. The new owner was really surprised to discover a 1966 Ferrari 330 GT covered with dust inside, in almost perfect condition. The preliminary valuation of the car is more than $500,000. The previous owner must have been a very forgetful person!

A Staffordshire hoard in the backyard
4 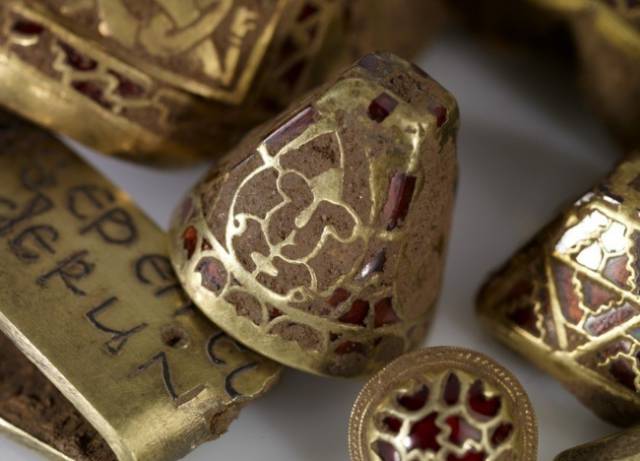 On July 5, 2009, Terry Herbert, an English farmer, was walking with his old metal detector near his house searching for a ring that his daughter had lost. But he found treasure instead! 1,500 golden and silver items dating from the 7th century. The weight of the findings was 16 lb (7.5 kg), and its value was more than $5 million.

As this hoard belongs to the country, the man only got a reward equal to half of the cost of the treasure....but we’re sure the farmer was more than happy with this!

Treasures in an old chair 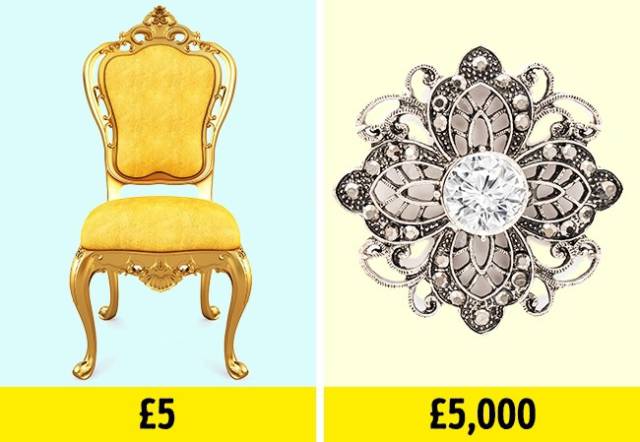 A Scottish couple from Biggar bought an old chair for £5, but they didn’t have money to repair it, so the purchase was stored in the attic for years.

6 years later, Mr. Milner-Brown decided to fix the chair. He took off the upholstery and discovered diamond jewelry inside.

The man didn’t tell his wife about his finding. He just gave her the ring and the earrings with precious stones.

Only in 2016 did the husband reveal his secret. The couple turned to experts and learned that their findings were worth almost £5,000.

61-year-old Martin Backhouse was invited to Bishop’s Castle Community College to tune a piano that the Hemmings family gave to the college.

During his work, the man found 7 bags with coins from Victoria’s reign under the piano keys. Experts estimated their value at $640,000.

It’s not clear even now who decided to hide the coins and when. Martin got a reward, but, unfortunately, the family that owned the piano for 33 years didn’t know about the money and missed their chance to get a reward. 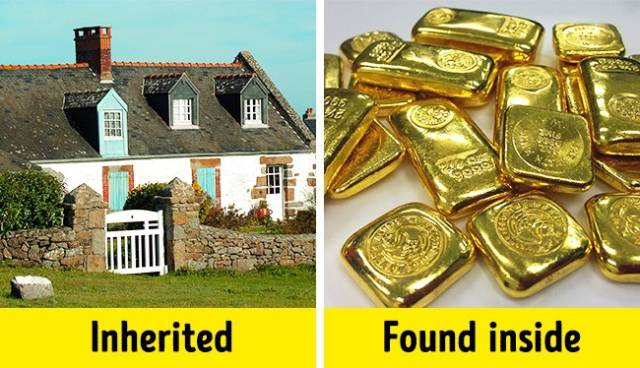 A French man who remains nameless was lucky enough to inherit a house in Normandy.

The new owner started to look through his property and noticed a small box with gold coins that was fastened to a chair. He found even more gold in a whiskey box. Later, the man discovered a huge pile of gold bars.

The total sum was almost $3.7 million. But due to French rules, the man had to pay an inheritance tax equal to 45% of his finding. 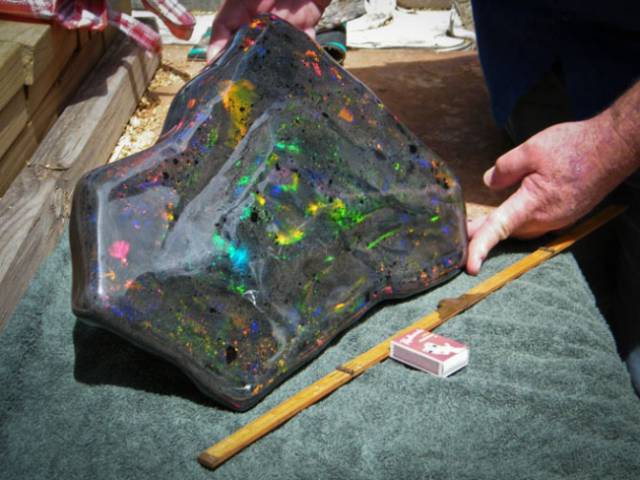 In 2011, the world’s largest opal matrix was found in the opal fields in South Australia. This stone had 55,000 carats (25 lb) of pure opal. It was found by noted designer Stuart Hughes and his associates.

The stone was valued at $1 million.

Money found in an attic
9 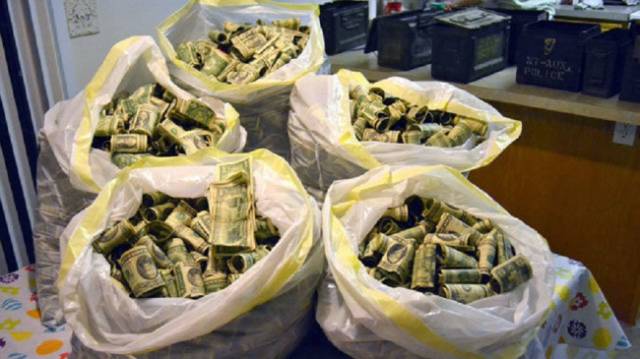 Josh Ferrin from Utah was in his workshop when he noticed a scrap of carpet sticking out of the ceiling. He pulled on it, and an access panel to the attic popped open. He saw a metal container, opened the lid, and found several rolls of money tied up in twine.

But there was more than one box of money — he found another 7 boxes full to the brim, plus 2 big black trash bags full of cash. In all, about $45,000.

They had recently inherited the house and said it must have been their dad who had hidden the money.