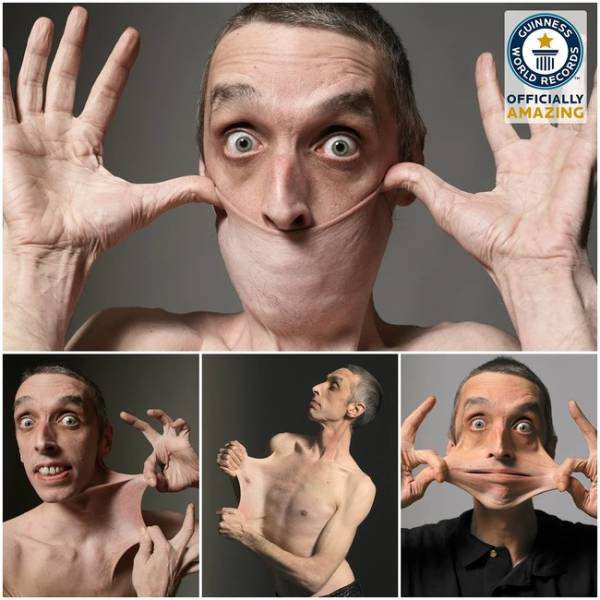 Garry Turner from the UK is a real life Elastic Man. His skin is so flexible that it stretches out up to 15.8 cm. Garry’s incredible flexibility is due to a rare medical condition known as Ehlers-Danlos Syndrome — a genetic disorder that causes hyper-mobility of joints and hyper-extensibility of skin.

Most piercings in their lifetime 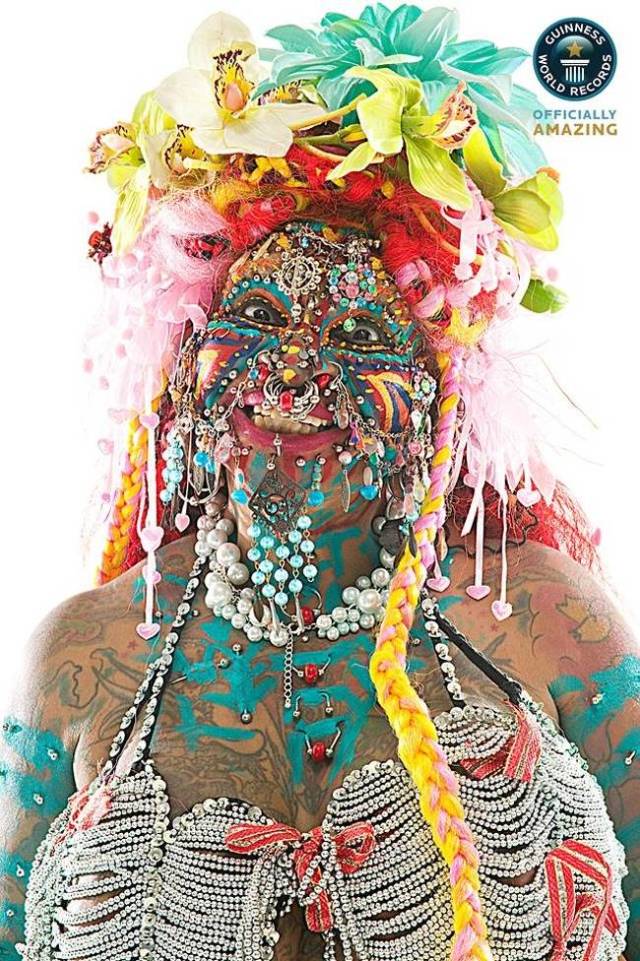 Elaine Davidson, a former restaurant owner from Brazil, is famous for her unconditional love of piercings. Elaine got her first one in 1997 and since then has has been pierced more than 4,225 times. And she has no intention to stop.

Most flesh tunnels on a face 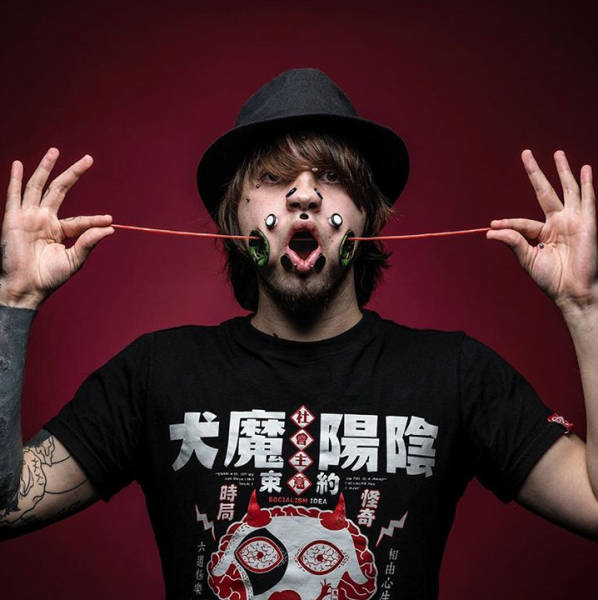 Joel Miggler from Germany is one unique person. He holds the record for the most flesh tunnels in a face. As of November 2014, the number his face tunnel count was at an unbelievable 11, with two large ones in right through his cheeks.

Most piercings in the tongue 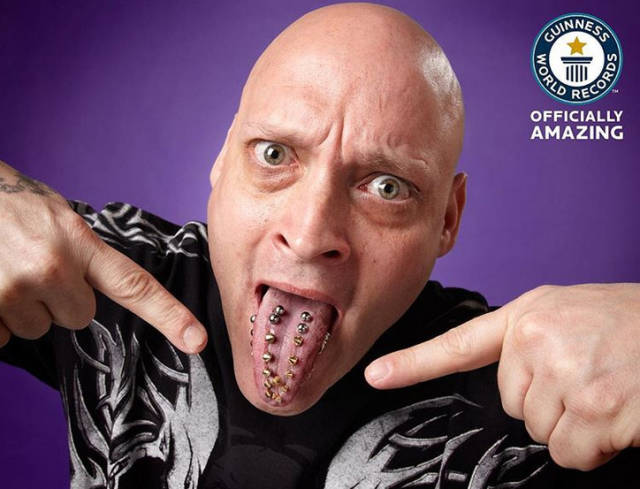 Another big piercing fan on our list is Frank Vacca from the U.S. His tongue is the most pierced one in the history with a whopping 20 piercings through it!

The most tattooed seniors 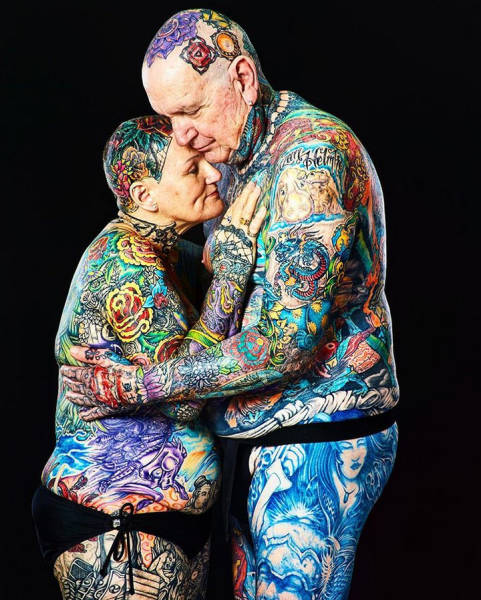 Meet a lovely couple from the U.S., Charles Helmke and Charlotte Guttenberg. Both of them are record-breaking tattoo lovers and have been named the most tattooed senior citizens. Charles’ body is 97.5% covered with tattoos, Charlotte’s is 91.5% covered. 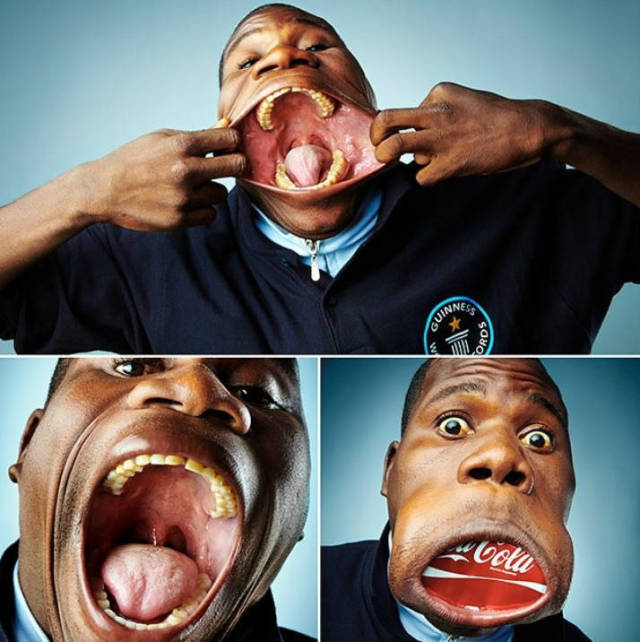 Francisco Domingo Joaquim “Chiquinho” has a very unique feature — he holds the record for the world’s widest mouth. This guy from Angola can open his mouth up to 17 cm wide. Now, that’s what we call jaw-dropping!

Longest fingernails ever (male and female) 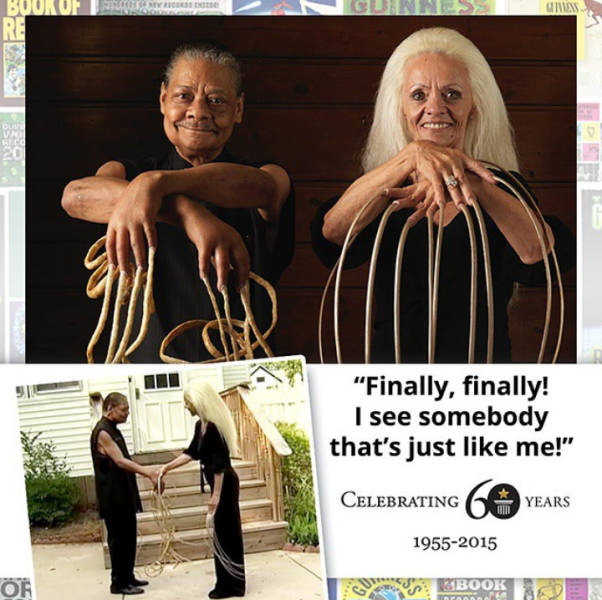 Wolverine would’ve certainly been jealous of these claws! Two U.S. citizens, Melvin Booth and Lee Redmond hold the record for the longest (respectively) male and female nails ever. These things must’ve taken a lot of time to grow. 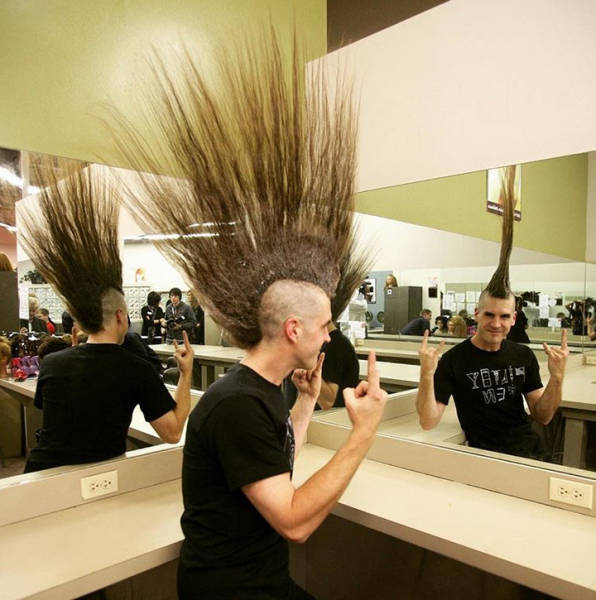 Nothing says ‘punk’ like a rockin’ mohawk. And perhaps no one loves mohawks more than Eric Hahn, who in 2008 had the tallest mohawk measured at 68.58 cm. We wonder how much hair spray it took to achieve this record. 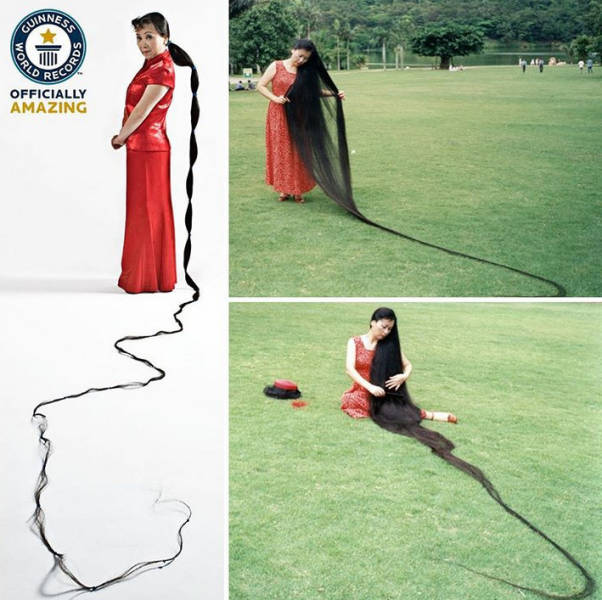 Xie Qiuping from China has the longest hair in the world, measured to be 5.627m long. The woman says that she stopped cutting her hair when she was 13. Perhaps the story of Rapunzel isn’t a fairytale after all? 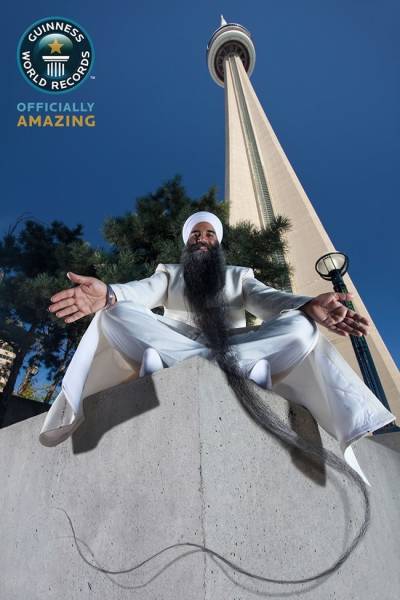 A Canadian man, Sarwan Singh looks more like a genie from a lamp than a regular guy! His beard is incredible. Measuring at a length of 2.495 m, it is considered to be the longest beard in the world. 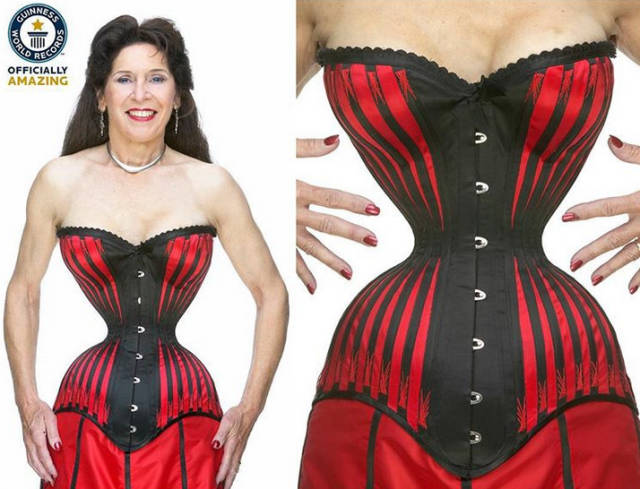 If you think that the Kardashians have the biggest waist to hip ratio, think again. The amazing Cathie Jung from the USA has a waist measuring at only 38.1 cm in diameter! 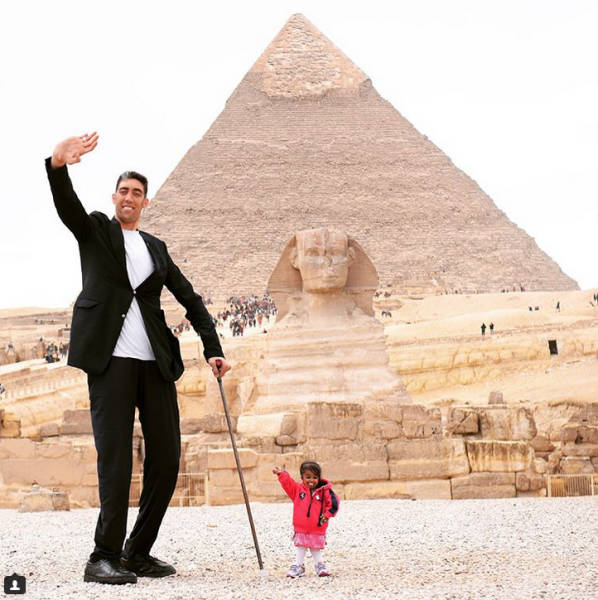 With an unbelievable height measuring at 251 cm, Sultan Kösen from Turkey is named the world’s tallest man alive. Jyoti Amge from India on the other hand is only 62.8 cm tall, which makes her the shortest woman alive. Think about it — Sultan is almost 4 times taller than the adorable Jyoti! 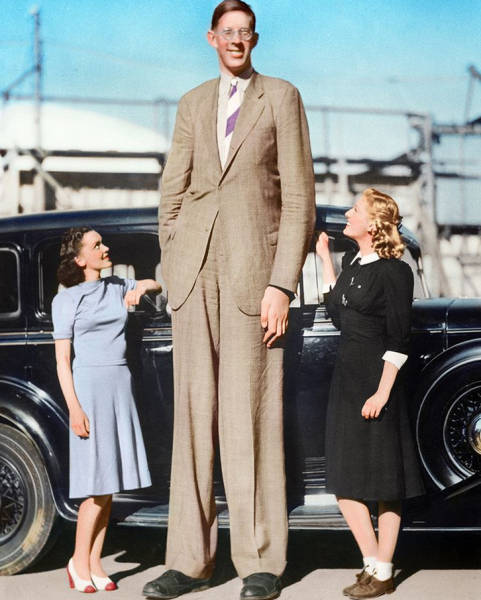 Although Sultan’s height sounds impressive, he would’ve seemed short in front of Robert Wadlow. Born in the U.S., Robert holds the GWR for the tallest man ever — his height measured at a dazzling 2.72 m! No comments here. 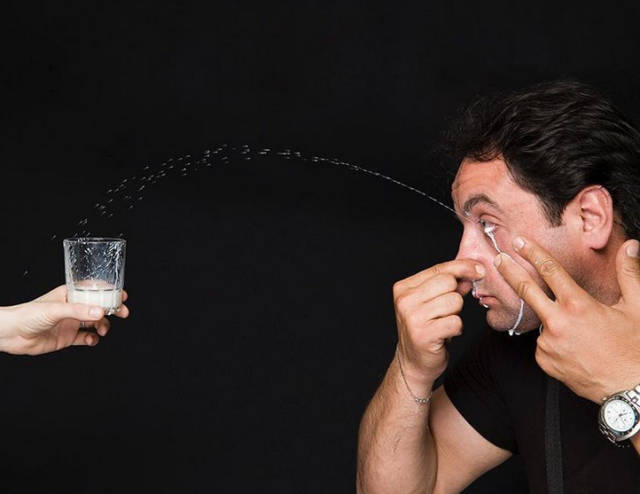 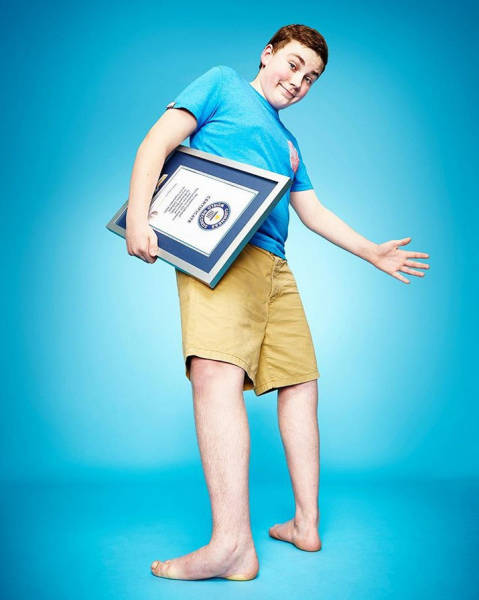 It’s not Photoshop — it’s Maxwell Day from the UK! The boy’s feet are extremely flexible — Maxwell’s right foot can be turned to an unbelievable 157°, and his left foot to 143°. With this being said, Maxwell holds the record for the largest foot rotation ever. While it may be a little creepy, we think it’s pretty cool!

The longest kiss ever! 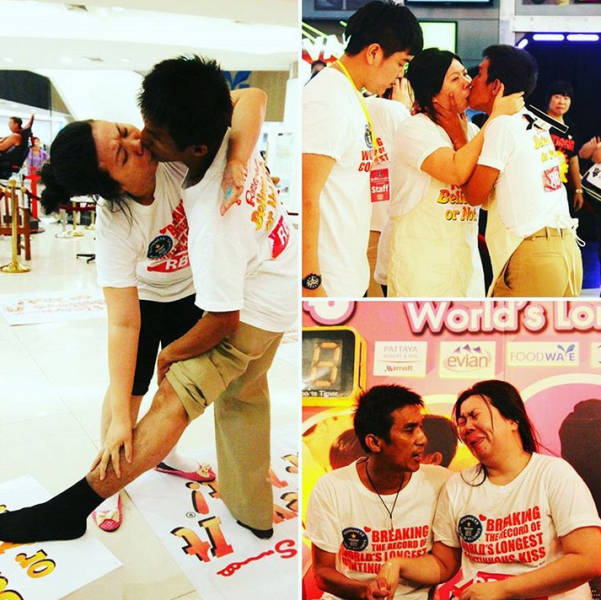 How long was your Valentine’s Day kiss? We bet it wasn’t even close to the record-breaking kiss Ekkachai and Laksana Tiranarat from Thailand shared. In 2013 on the most romantic day of the year, the couple achieved the GWR for the longest kiss ever — it lasted for 58 hours, 35 minutes and 58 seconds! Could you and your partner surpass them?