Made In China: The Most Inventive DIY Things You Have Ever Seen (21 pics)

Zhang Wuyi's homemade submersible is tested on Moshui Lake in Wuhan. The 4.6 metre long submarine was built using parts from a small yacht and took Zhang and his friends 25 days to build. According to Zhang the submarine can travel for 20km/h for 10 hours. Zhang used to be the apprentice of Li Yuming, a local renowned submarine enthusiast who built 7 submarines in the past five years. 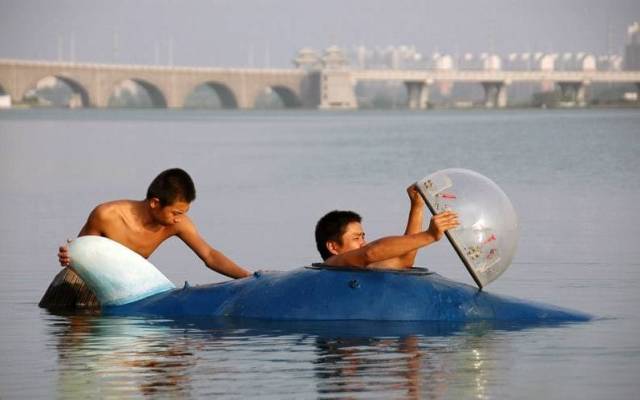 A dog was spotted going for an unusual walk in Shaoyang, southern China's Hunan Province - trotting along on a homemade treadmill. The dog happily jogged along on the mini assembly line - attached to a shelter erected over him by a lead. Passers-by guessed that the dog is too energetic and his owner decided this was the best way to let him have enough exercise to wear him out. 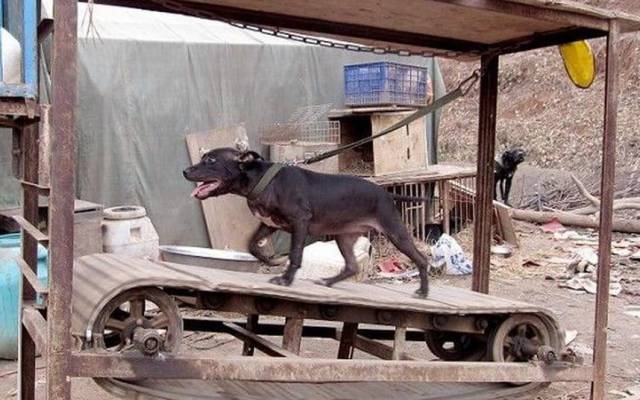 Above, 50-year-old farmer Chen Lianxue with his homemade plane on the roof of his house in Qifu village of Pingliang, Gansu province. The plane took Chen about 28,000 yuan (£2,900) and over two years time to make, local media reported. Observant readers will have noticed that Mr Lianxue's craft only has one wing. 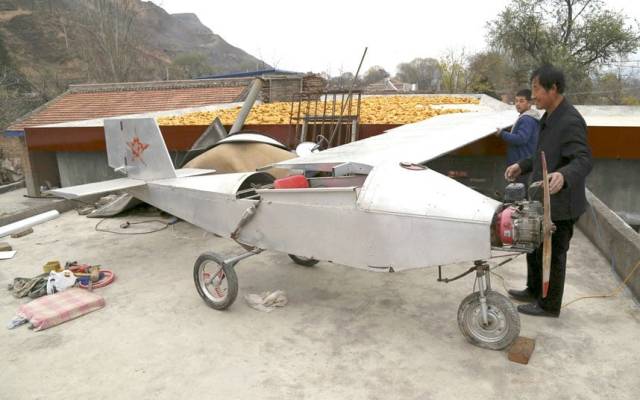 Farmer Shi Songbo from Shangqiu city, Henan province, said that he has always had a fascination with flight and really wanted to try it for himself. To do this, Shi spent 300,000 yuan (about £30,000) crafting a 23-metre-long, 10-metre-tall airship... 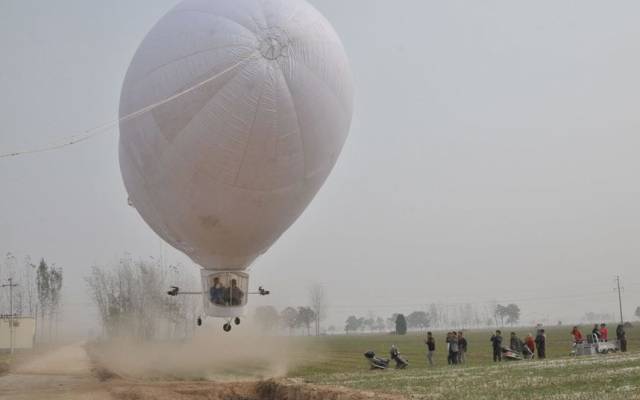 ...His first flight took him 500 metres into the air and lasted for nearly two hours. 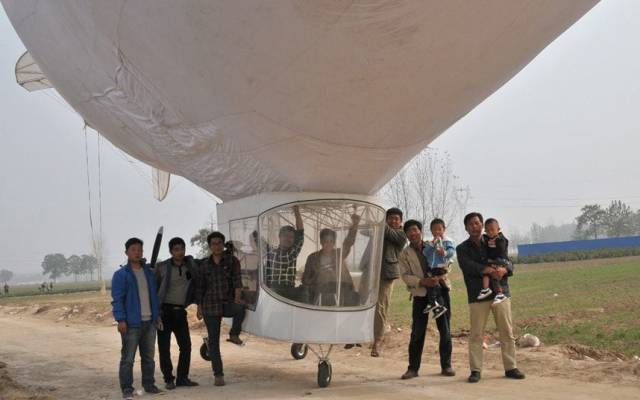 A man was detained by police for five days for driving a homemade racing car through the streets in Taizhou, eastern China's Zhejiang Province. According to officers they pulled the unusual vehicle over at around midnight and its driver Zhu Runqiang, 47, said he was taking it for a test drive after recently building it. Zhu said he made the F1 style racing car at home and only dared to test his creation at night when there were few vehicles on the streets. However, as Zhu has no driving licence and the car was illegally made he was fined 700 Yuan at the scene and held by police for five days. His vehicle was also confiscated. 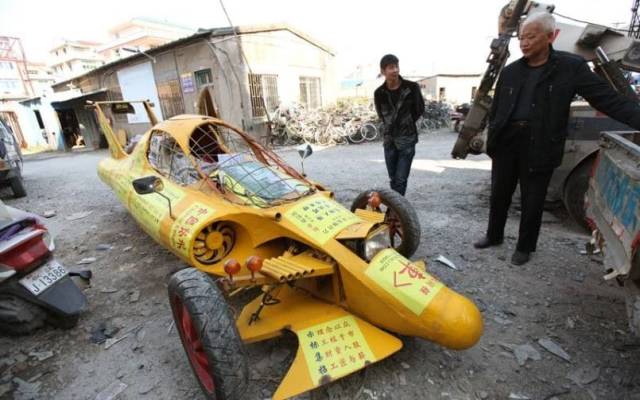 A farmer from Wuhan in China's Hubei Province has successfully flown a homemade 'flying saucer'. Shu Mansheng's 4-metre in diameter UFO is powered by 8 motor engines and during a test flight he managed to fly it two metres above the ground for over 30 seconds. The round steel flying device, which cost more than 30,000 Yuan to create, is the fifth of its kind that Shu has built. 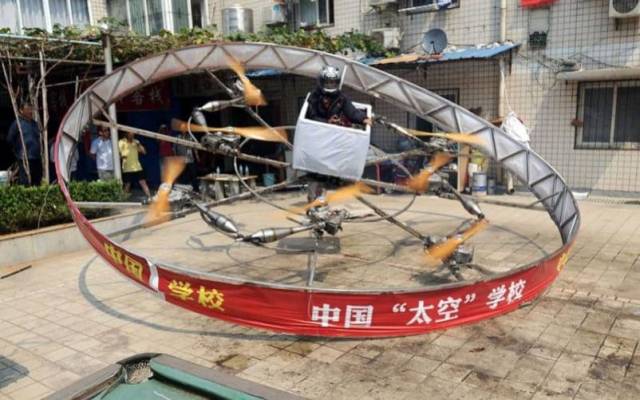 A retired Chinese traffic officer has created his own mini electric car...which has no steering wheel. According to Li he loves watching the TV show 'I Love Invention' and it inspired him to make a car suitable for disabled people and pensioners. Without a formal mechanical education Li acquired the knowledge needed to build the car from books and by consulting moto mechanics. Rather than have a steering wheel, everything - moving forward, reversing or turning - is controlled using the foot pedals. Li comments: 'It's easy to learn and operate'. According to Li the electric car is built to national safety regulations, can run for 60km on one charge and costs around 3,000 to 5,000 Yuan to make. 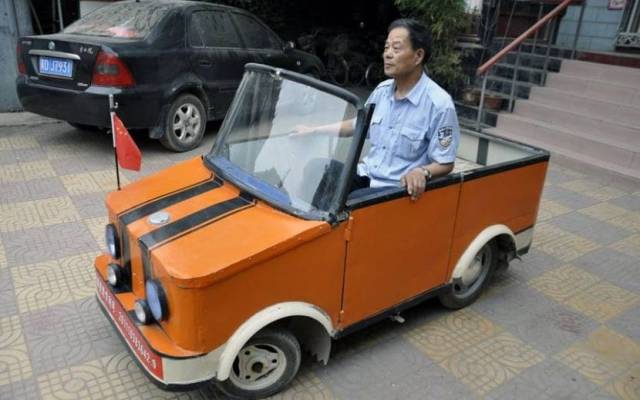 A man is seen testing the functions of his latest homemade submarine in Wuhan. Zhang Wuyi has been building submarines since 2008 and in that time has created dozens of different versions which he is continually improving. 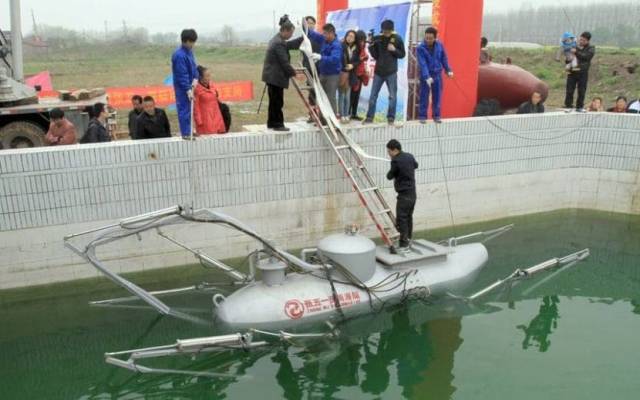 Ma Yinhai from Hefei in eastern China's Anhui Province shows off the cockpit of his homemade plane. It will seat four people and Ma estimates that by the time he finishes it will have cost him around 3 million Yuan (£300,000) to build. 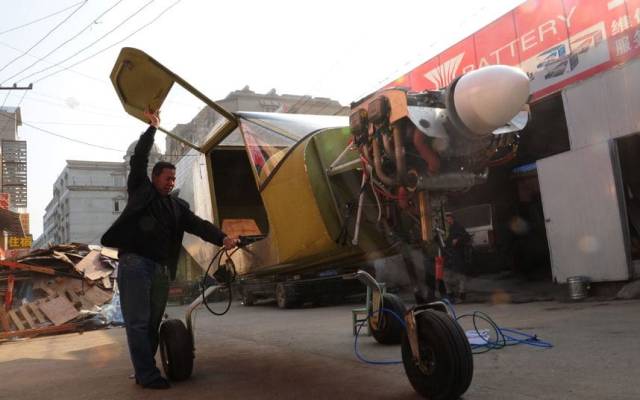 A Chinese businessman took 2 years and spent £150,000 making his own emergency disaster survival pod for times of extreme weather and natural disasters. Yang Zongfu tested his Noah's Ark survival pod on a 50 metre slope. Hundreds gathered to see the 4 metre diameter metal ball put through its paces after Yang boasted it could sustain temperatures up to 1700C and impact forces of 350 tons. He also claimed 'the reserve and life-sustaining system inside ensure a family of three live safely inside for 10 months. 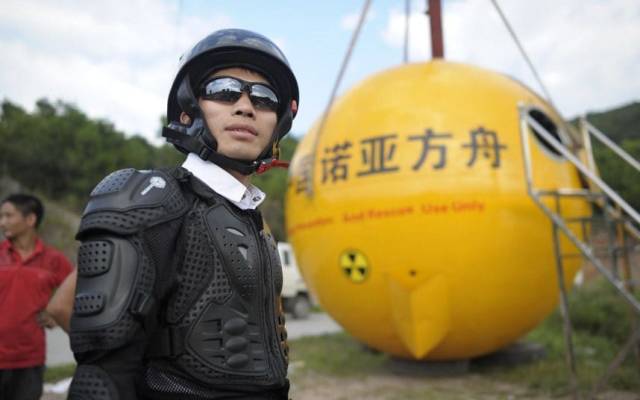 Two Chinese aviation fans have successfully assembled a working water plane of their own. The two men were left celebrating after their makeshift craft recently enjoyed a successful maiden flight in Guangzhou, southern China's Guangdong province. With a wingspan of just 2 metres the plane can carry two passengers, however the fuel tank is positioned just above the head of the pilot. Hardware store owner Xiong Tianhua, 34, was the leading designer and maker of the plane, alongside partner Chen Baolong. The pair have assembled many planes over the past ten years, but this is the first time they have attempted to make a water one. 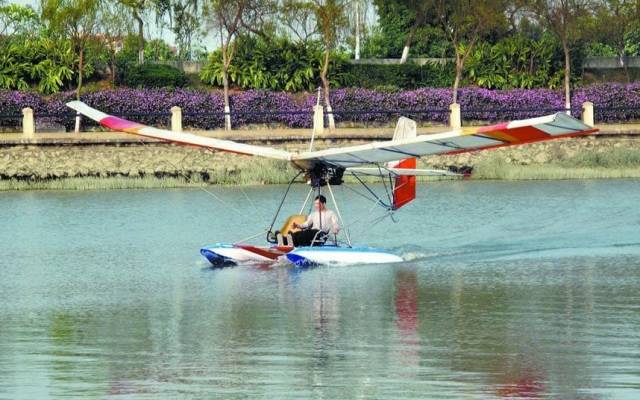 A man from eastern China's Jiangsu Province has built his own 'Lamborghini' car. According to 28-year-old Wang Jian he has loved cars from an early age and when he was 16 he trained to be a car mechanic. After working at an car showroom for 10 years Wang opened his own business. He comments: 'I often felt I missed something as I wanted to build a unique car of my own.' So Wang decided to build his own Lamborghini Reventon. 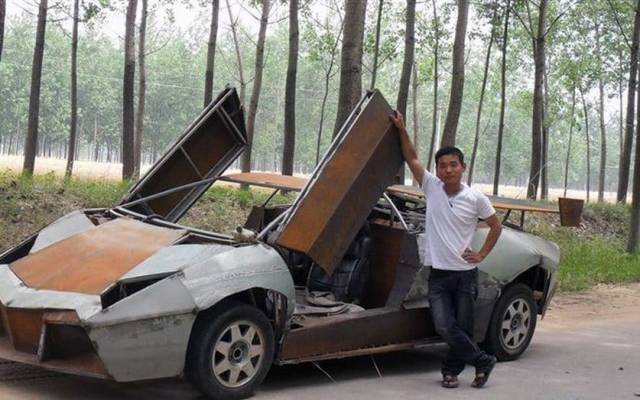 Yang Shijun is seen testing his homemade plane in Changchun, in China's Jilin Province. Yang spent a year and over 100,000 Yuan in making a small jet plane at his home in memory of his father Jinhai. He has named the finished plane No.1 Jinhai. The plane's wingspan is 9.5 metres and 5 metres long from head to tail, with a weight of 110kg. Yang is now applying for a license for test flight with the local authority. 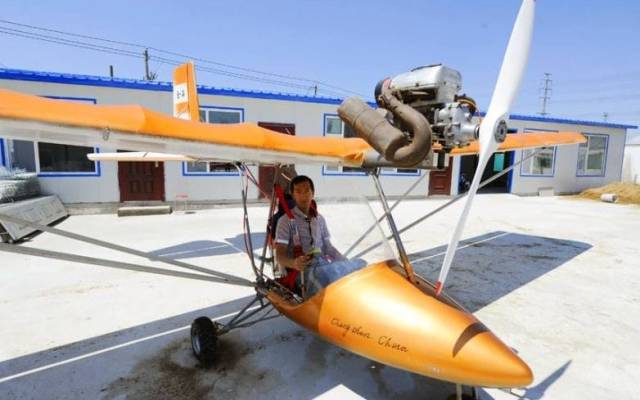 Ouyang Guojun built this aircraft with spare parts over the course of a year. The vehicle flew a successful low altitude flight on 26th July 2009. 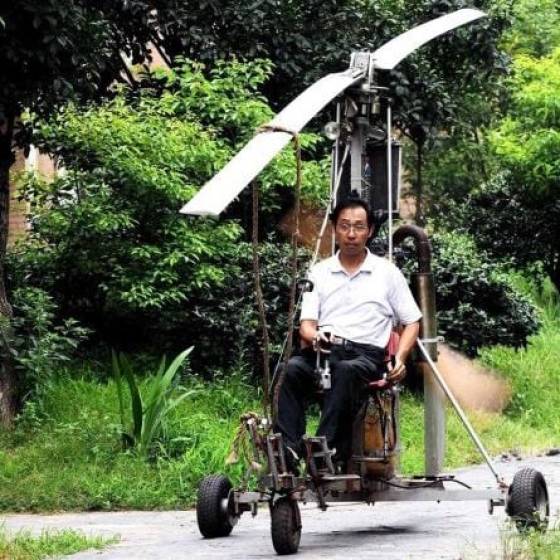 A woman rides a peddle-powered amphibious vehicle in Wuhan. 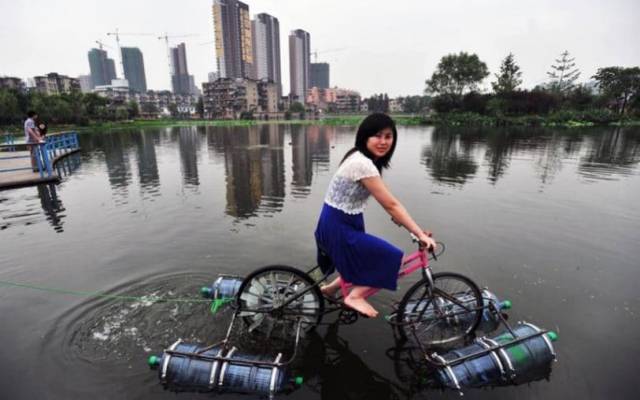 Chinese villagers help local farmer Tan Yong to launch his homemade submarine for its maiden voyage in a river in Lijiashan village. 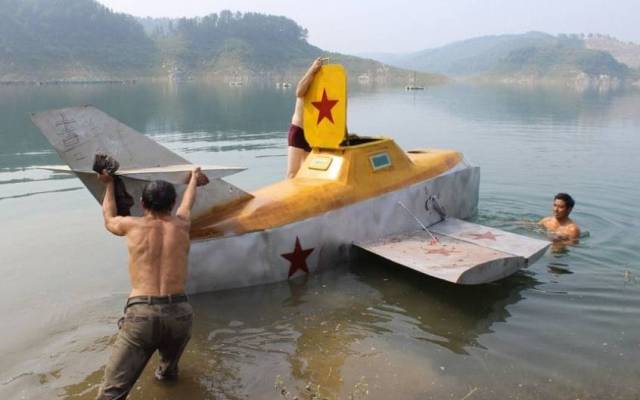 A retired soldier has built a homemade tank for his son as a special gift. Jian Lin, 31, was responsible for repairing aircraft during his military service in the navy of Chinese PLA (People's Liberation Army). After retirement, he worked as a truck driver to make a living. He had the idea of making a real tank when his 6-year-old son broke his toy tank and asked him to buy a new one. 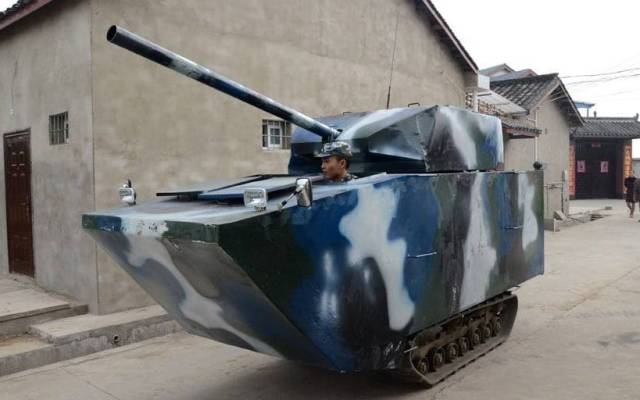 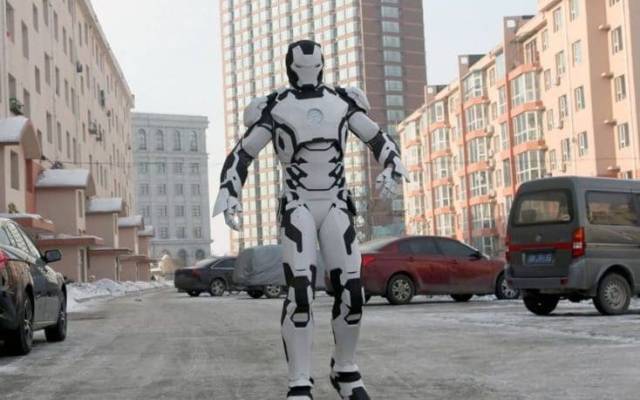 A retired man has made six homemade cannons to resist forcible demolition of his house in central China's Henan province. The man, surnamed Zhou, was afraid that his home would be demolished soon, as many houses in his neighbourhood had been pulled down. 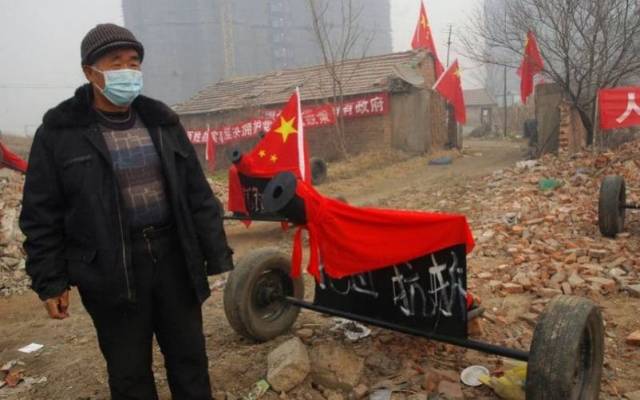 A man who built his own submarine has sold it to a sea farm owner in Wuhan, central China's Hubei Province to help him harvest sea cucumbers. Zhang has named the submarine Twilight and has tested it underwater more than ten times to ensure it is safe. According to Zhang the local safety and quality department have also approved his invention, which can work continuously for ten hours at a depth of 100 metres. The submarine is equipped with fishing and safety devices and life support systems. 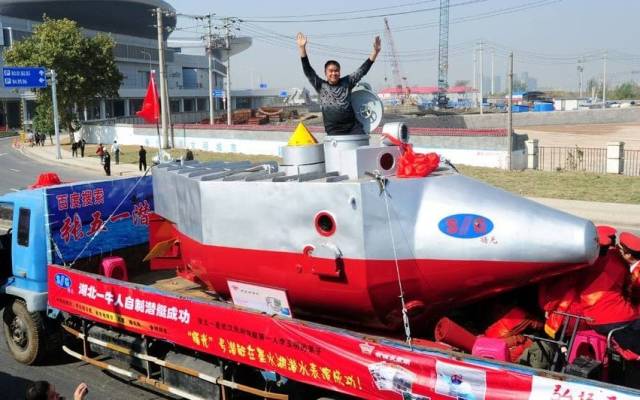