Some Facts About The Gruesome 1986 NASA Accident (20 pics) 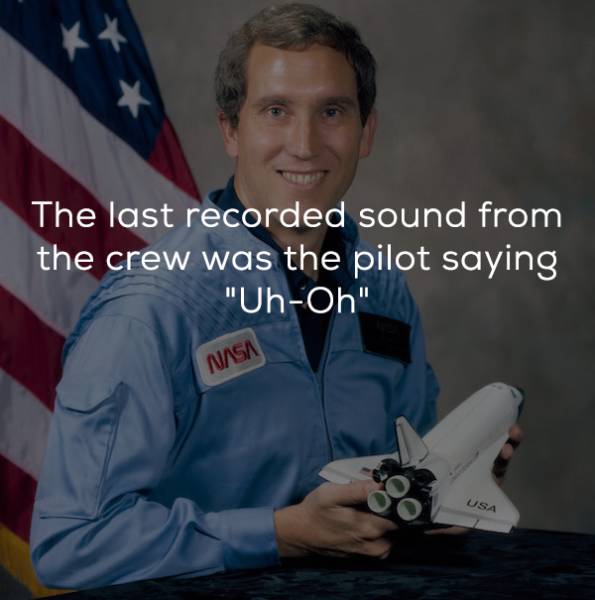 This mission, called Challenger STS-51L, was pilot Mike Smith’s first spaceflight. Just before NASA lost contact with the shuttle, the crew’s voice recorder captured Smith’s last words. This proves that the crew knew something was going wrong, before it did. 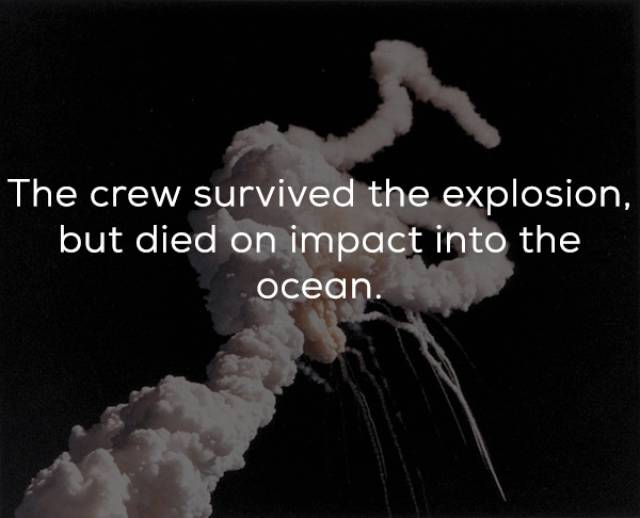 At first it was assumed that everyone died in the explosion, but there’s evidence that proves otherwise. Allegedly, NASA obscured the truth that the cabin didn’t depressurize upon the accident, but that the crew was alive and conscious and they ascended 3 more miles, then plummeted 12 miles down into the ocean.

When the cabin was recovered, it was noted that several astronauts had activated their personal emergency air packs, before their impact. 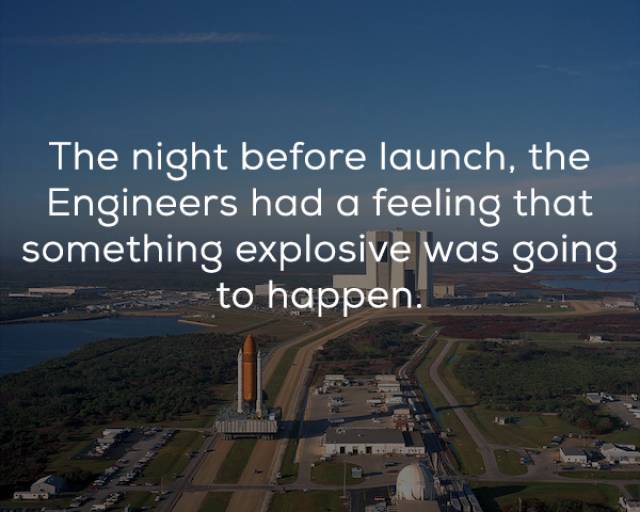 The previous night, several engineers tried to dissuade NASA from going ahead with the mission, as they knew the vitally important O-ring seals didn’t work in chilly weather, and the launch was scheduled on a day predicted to be frosty. 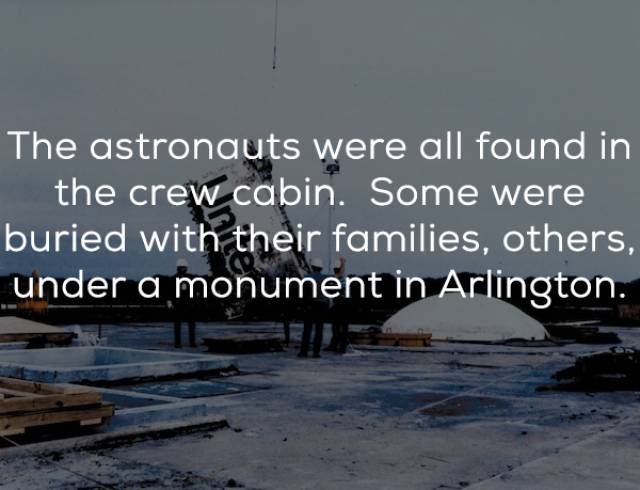 When the shuttle exploded, it scattered the wreckage all over the ocean off the coast of Florida. It took weeks to discover all the pieces, and after 6 weeks, navy divers found the debris of the crew cabin 15 miles east of Cape Canaveral, under 100 feet of water. 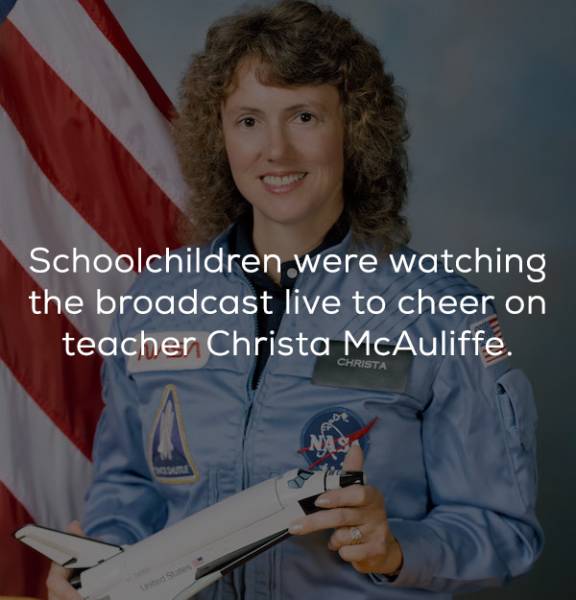 Christa McAuliffe was a 37-year old social studies teacher at Concord High School in New Hampshire. She was selected as a civilian and NASA’s first educator in space. She was supposed to teach a few lessons in space. Instead, her class was watching live when the shuttle exploded. 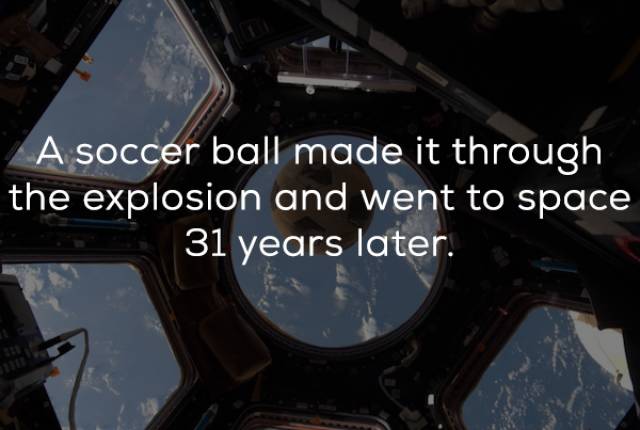 Astronaut Ellison Onizuka brought along a soccer ball from his daughters high school team. When it was recovered intact, it was returned to daughter Janelle Onizuka, who put it on display at the school.

Three decades later, Shane Kimbrough, who’s daughter attended the same school, asked if he could take it into space. In February of 2017, he tweeted out a photo of the ball floating in zero gravity. 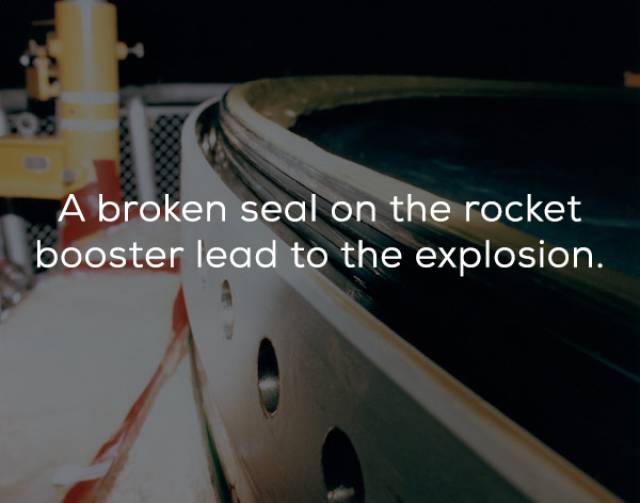 At the time of liftoff, the O-seal on the right rocket booster failed. Subsequently, heated gas escaped the booster rocket, vaporized the metal connecting the booster to the shuttle’s orange tank and caused hydrogen gas and liquid oxygen to ignite and explode. 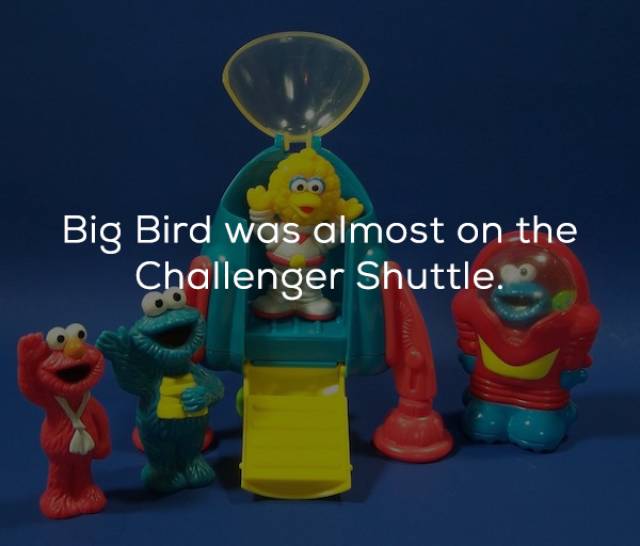 There was serious consideration of inviting Big Bird and his puppeteer Caroll Spinney, onto the ship. The hope was to gather the attention and interest of schoolchildren.

Luckily enough, the plan fell through and Big Bird remained on the ground. 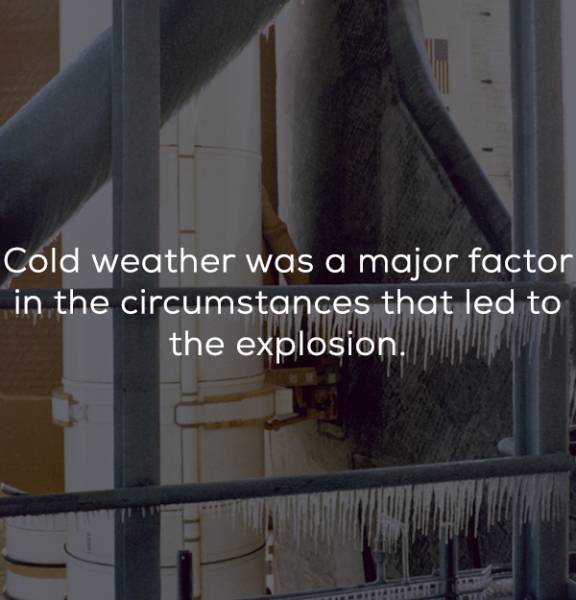 The official investigation proved that the failed O-ring seal was weakened due to the cold weather the day of the launch. In fact, that day, the weather was below freezing, but NASA still proceeded with the launch. 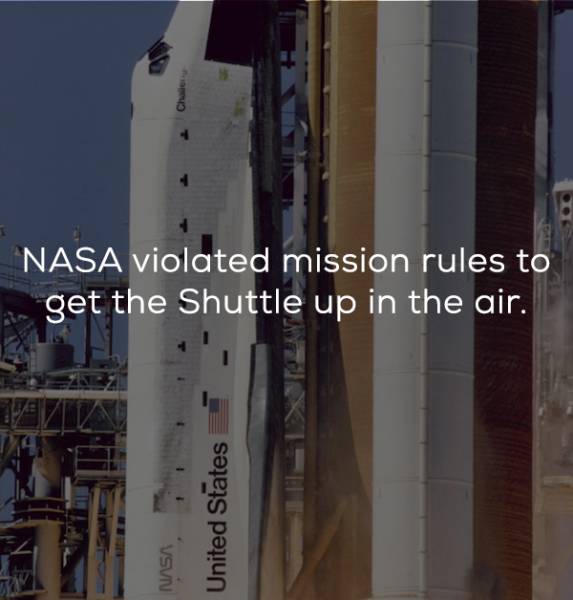 During the investigation, it was discovered that a whole series of rules were violated to get the shuttle up in the air. Despite the engineer’s protests about the O-rings and fuel, NASA still proceeded with the mission – in direct violation of their set launch rules.

The supposed reason was to maintain the illusion that the space program was infallible. That the Regan Administration could maintain a fleet of spacecraft, launch them regularly and dominate the space race. A cancelled launch would have created doubt and potential funding issues. 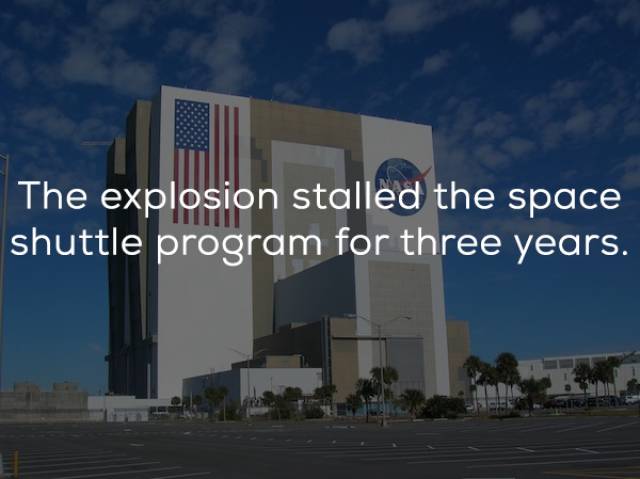 Since this was a high profile tragedy, the program was suspended. For the following three years, NASA worked to implement the findings of the Rogers Comission (the investigative body for the explosion) and change their protocols.

There were no other accidents until the Columbia explosion in 2003, which was for a completely separate reason from the Challenger. 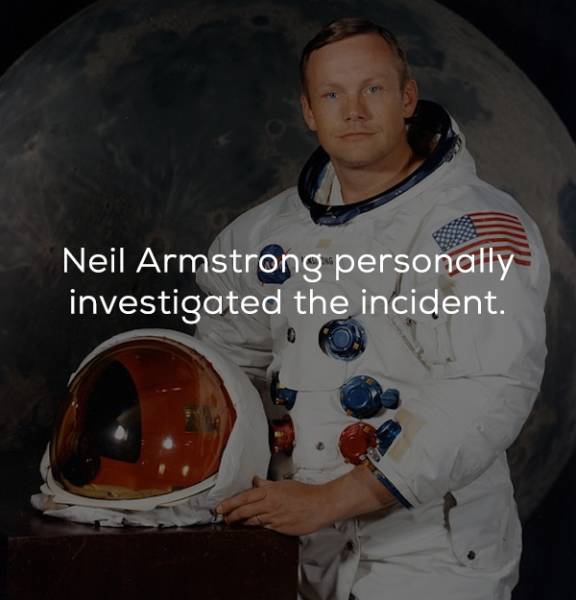 This disaster brought international attention to the dangers of space travel. People knew it was dangerous, but this was publicly seen and televised. Therefore, Ronald Regan formed the Rogers Comission to determine the cause and had Apollo 11 commander and first man on the moon Neil Armstrong as their public face. 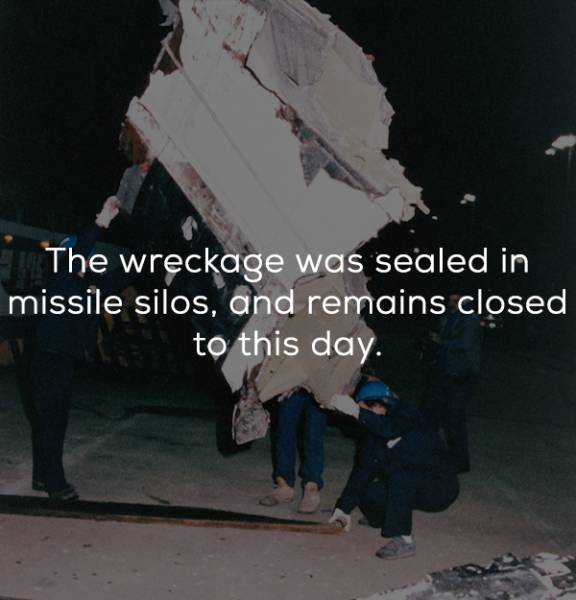 Roughly 120 tons of debris (30% of Challengers overall structure) was recovered from the ocean floor. After an exhaustive investigation, the wreckage was sealed in abandoned missile silos near Cape Canaveral. The silos, known as Complex 31 and 32, have remained sealed since. 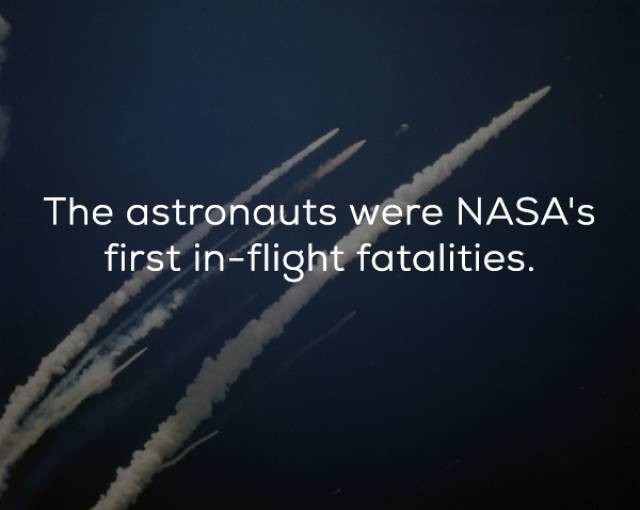 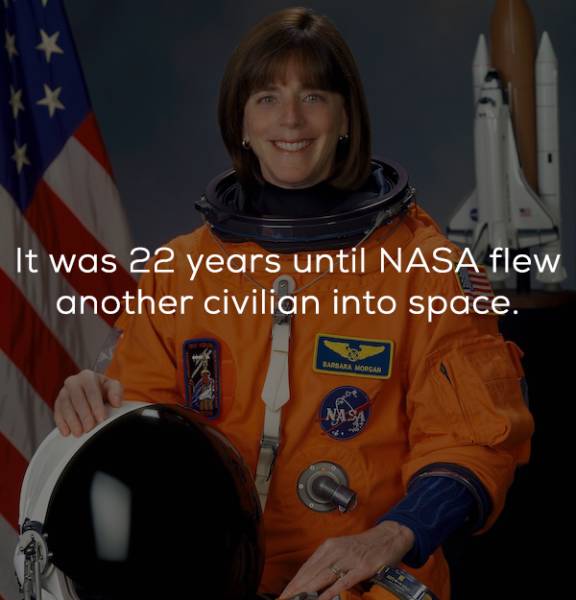 The initiative to put a civilian in space was put off for over two decades, until Barbara Morgan joined the Endeavour mission in 2007. Ironically enough, Morgan was McAuliffe’s backup for the Challenger mission.

She came back safely. 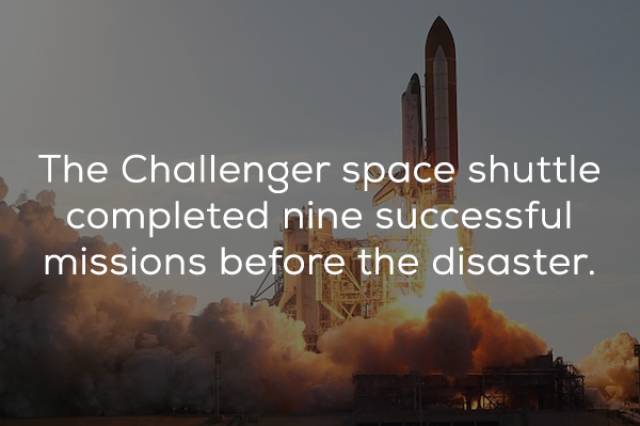 The Challenger shuttle was built in 1975 as a test vehicle for the space shuttle program. Originally called STA-099, it was vigorously tested and finally in 1979, it was declared fit for space.

First launched in 1983, it was the ship that launched the first spacewalk, and brought the first woman and African American astronaut to space. 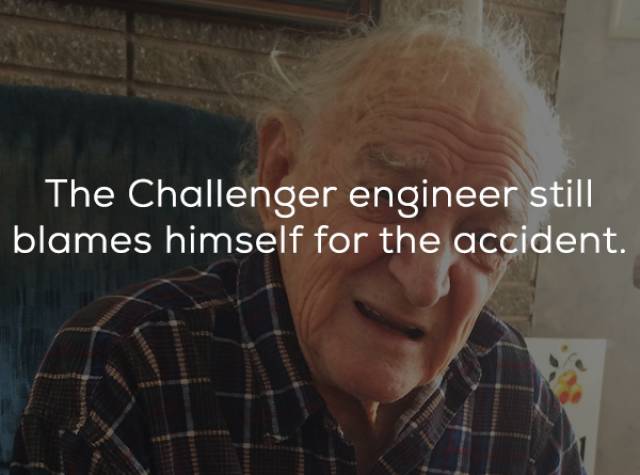 As recently as 2016, engineer Bob Eberling says he still feels grief over the explosion, and his inability to get NASA to cancel the launch. 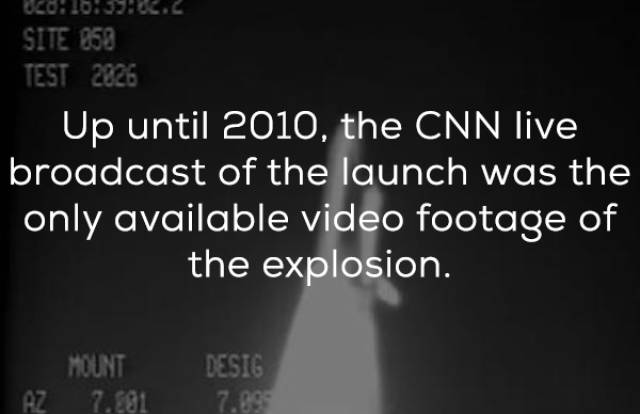 Because of the presence of McAuliffe, the media coverage of the launch was extensive. While CNN did a live broadcast, which became the most memorable footage of the event, there were other cameras that day. None of the other views of the explosion were publicly available until 2010, when they were declassified.

In total, there are 7 known videos of the explosion. Some came from amateur civilians, while one was a professional filmmaker.

You can see one here. 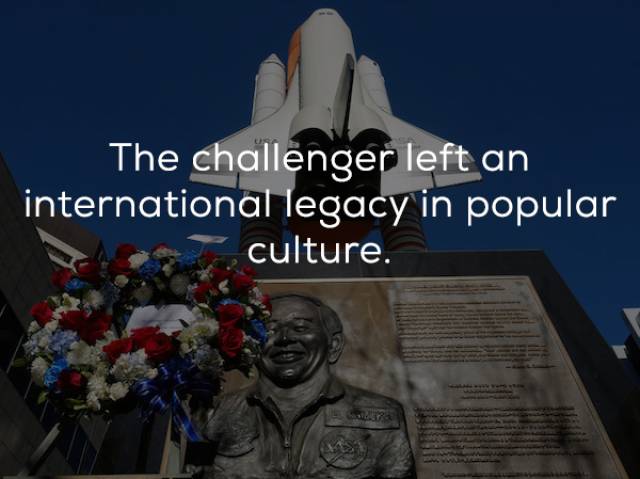 This was a pivotal moment in US history, and it inspired countless artists to create songs, shows and sculptures to memorialize it, while tv shows like Punky Brewster & Star Trek IV: The Voyage Home were dedicated to the crew. 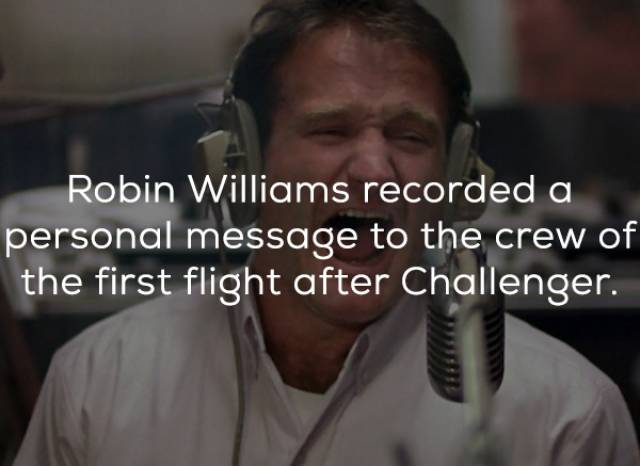 Everyone was worried about the first flight after the accident. The shuttle Discovery was set to take off in 1988, and prior to the launch Robin Williams starred in the film Good Morning, Vietnam. He ended up recreating his character for media that the astronauts were going to take up into space, and ended up lightning their mood and helping make a successful mission.