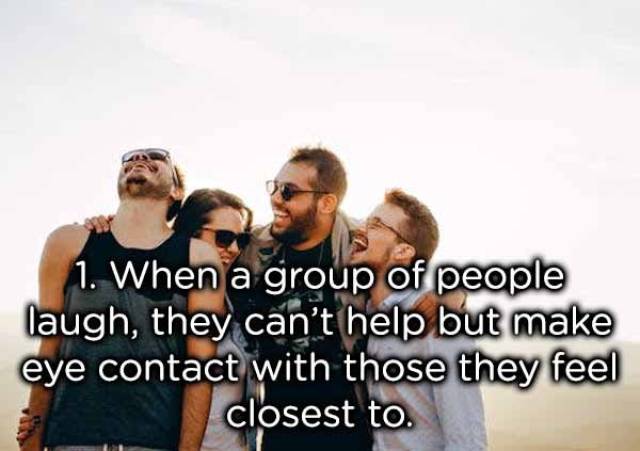 This trick can make you an astute observer of relationships of all types. It can tell you which members of your team are bonding and learning to trust one another, just as easily as it can tell you if you might have a shot at landing a date with a certain someone. You’ll also learn a lot about how you really feel about other people just by paying attention to who you make eye contact with. 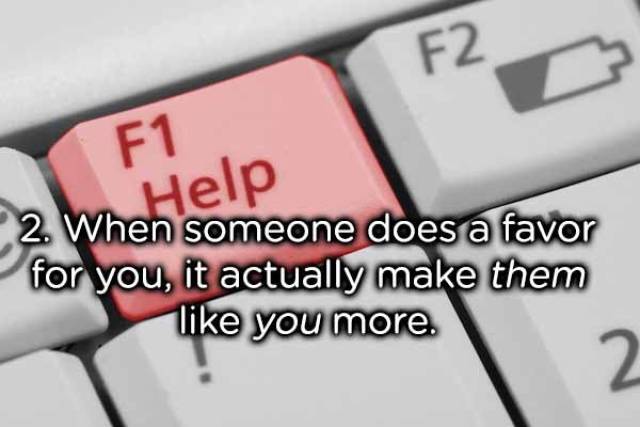 When you convince someone to do you a favor, they unconsciously justify why they are willing to do so. Typical justifications include things such as, “he’s my friend,” “I like him,” “and “he seems like the kind of person who would return the favor.” These justifications serve you perfectly. Not only did you just get help with something, but the other party also likes you more than they did before. 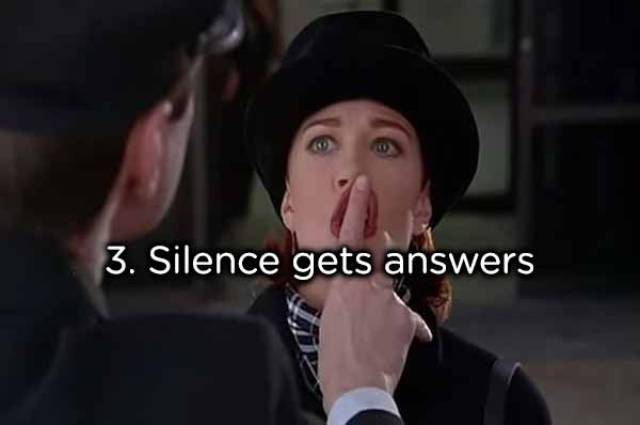 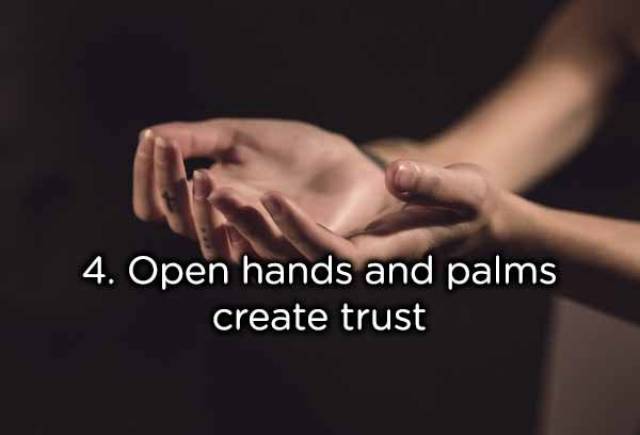 There’s an employee policy at LEGOLAND that says whenever someone asks where something is, the employee “presents” (open-palm gesture) their directions instead of pointing them. This is because the open-palm gesture conveys trust, making people more likely to agree with what you’re saying and to find you friendly and likable. Pointing, on the flip side, is generally seen as aggressive and rude. 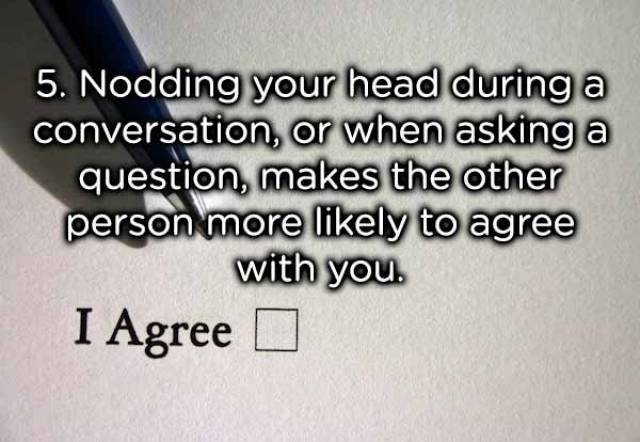 The next time you need to win someone over to your way of thinking, try nodding your head as you speak. People unconsciously mirror the body language of those around them in order to better understand what other people are feeling. When you nod your head as you speak, you convey that what you’re saying is true and desirable, and people are more inclined to agree with you. 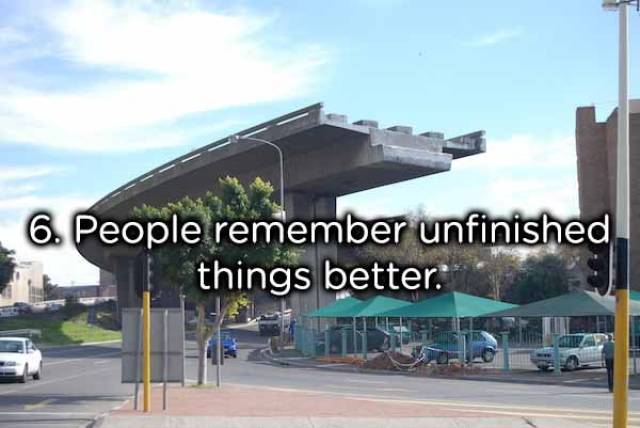 The natural tendency to remember unfinished things is called the Zeigarnik effect. Eve notice how some television commercials get cut off early? The company paying for the commercial cuts it off so that it sticks in your head longer than other commercials. The best way to forget unfinished thing (commercials or songs) is to finish them in your head. If a song gets stuck in your head, trying singing the last lines to yourself. You’ll be amazed how quickly it goes away. 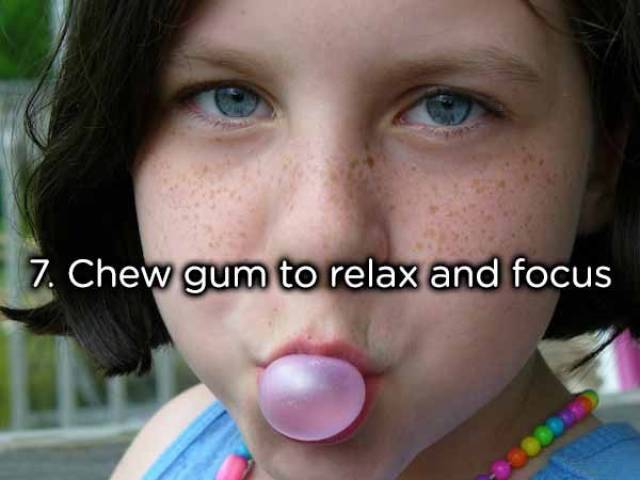 Chewing gum actually lowers your cortisol levels, the hormone responsible for stress. But chewing gum doesn’t just reduce stress, it also makes you more alert and improves your performance in memory-oriented tasks. it does so by increasing the blood flow to your brain and alerting your senses. When you experience a stressful situation while chewing gum, your body is less likely to go into the primal fight-or-flight mode. You probably don’t want to use this one while you’re talking, but it’s a great way to destress in preparation for a big presentation or challenging conversation. 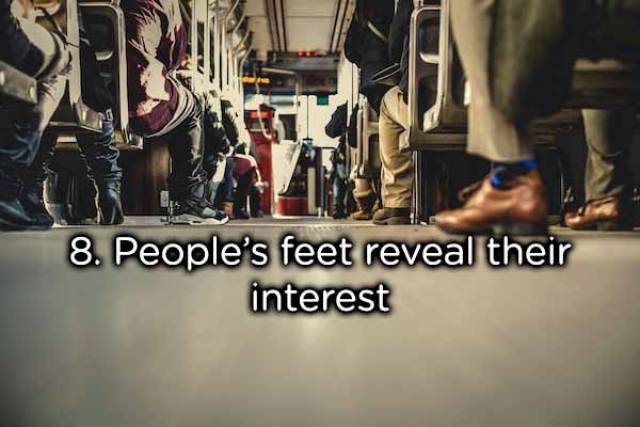 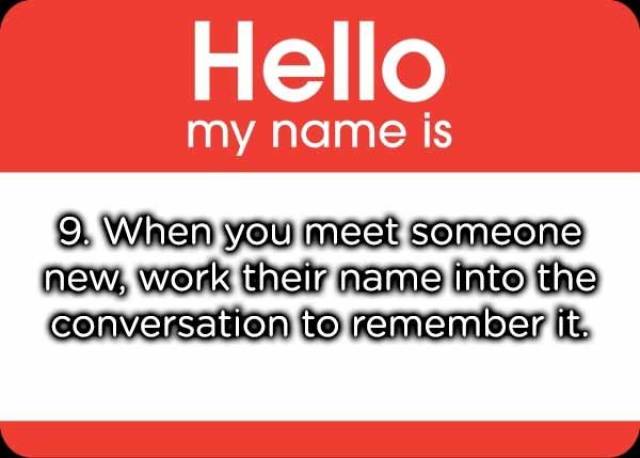 The goal here is to repeat their name three time in the first five minutes. It works extremely well, but the trick is to do it naturally. When you rattle of their name unnecessarily, it sounds foolish and awkward. Try to use phrases like, “Hello _____,” “Nice to meet you _____,” and “Where are you from _____?” 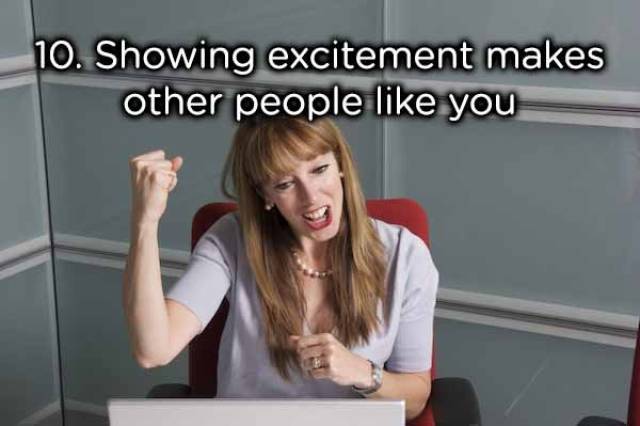 This one goes back to the idea that we mirror the behavior of those around us. If you show excitement when you see someone, they naturally mirror that excitement back at you. It’s an easy way to make a strong first impression and to get people to like you.