Famous Historical Photos That Have Fooled Nearly Everyone (14 pics) 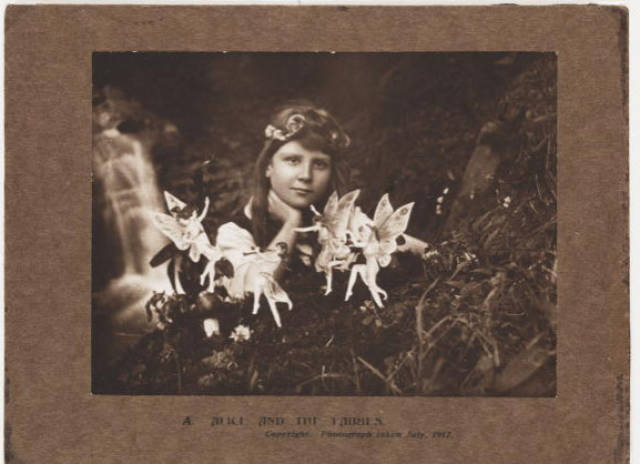 This interesting photo created by 2 cousins: Frances Griffiths and Elsie Wright, made the famous author of Sherlock Holmes, Arthur Conan Doyle, believe in fairies. It was taken in 1917. Doyle was also a spiritualist, and when his friends showed him this photo, he became so interested that he even called his friend, a specialist from Kodak, to figure out if the photo was real or not.

The truth was revealed only in 1983, the girls revealed the secret themselves. They said that they took copied photos of dancing girls from a popular children’s book, added wings to them, and using hatpins they secured these fairies to the foliage. They made a series of mystical, magical photos in which Sir Arthur Conan Doyle believed in until the end of his life and never knew the truth. 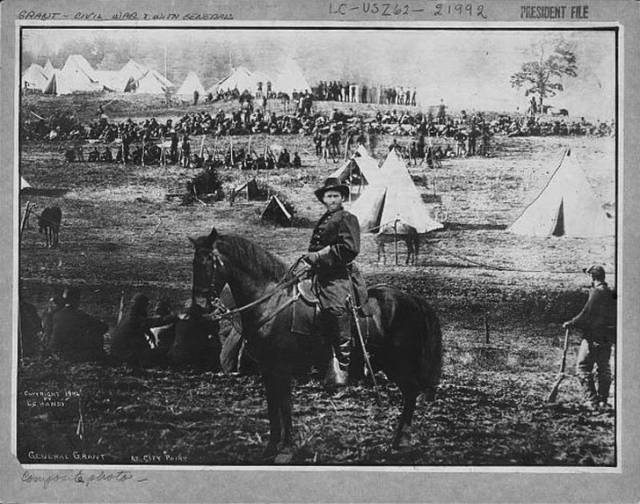 This photo of US General Ulysses S. Grant became historically important. The brave general is shown in front of his troops, sitting on a horse with a heroic look during the American Civil War.

But many years later researchers from the Library of Congress found out that this photo had been made from 3 different photos: a photo of Major General Alexander M. Cook (the horse and the body were taken from there), a different photo of General Grant (only his head was taken) and a background image of prisoners captured during a battle (the background was taken). Nobody knows how and for what purpose this “photoshopping” was done, but all the 3 photos are real and they have all been found.

“Riding away from nuclear testing”
3 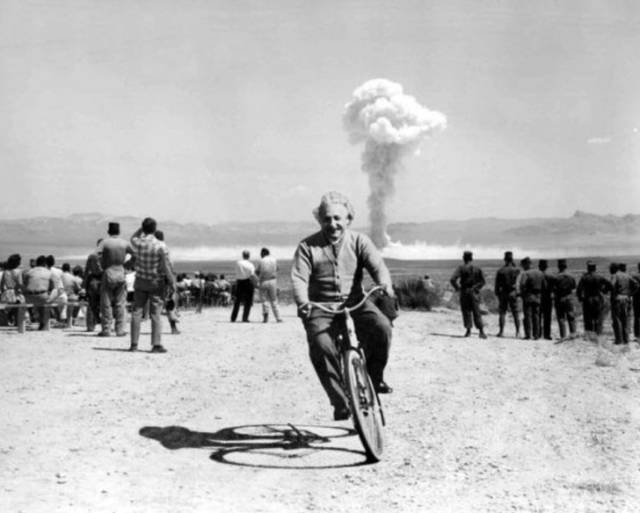 It seems that Albert Einstein is leaving the site of nuclear tests on his bicycle. Also, this huge smile on Albert’s face makes everything more funny, like he is the reason for these tests. But of course, in reality, this photo was made from 2 pictures: Einstein riding a bicycle and separate nuclear tests. Anyway, the result of editing these 2 photos is fantastic, we were pretty close to believing it!

“Kennedy and Monroe together”
4 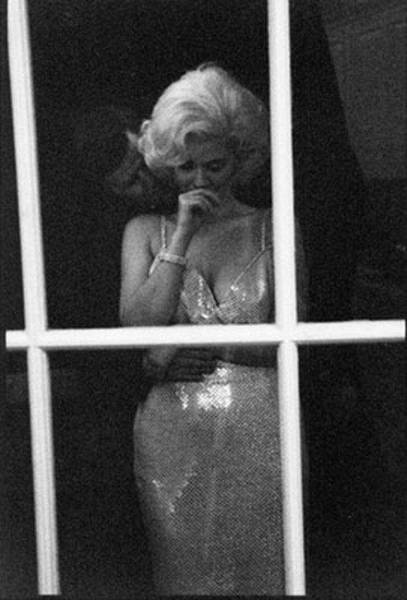 Seems like John F. Kennedy is hugging Marilyn Monroe from the back and they’re having a good time together, but this photo is fake. It was made by Alison Jackson, who is famous for staged photographs of actors who actually look like celebrities. In her collection you will find a lot of provocative fake pics of famous people. 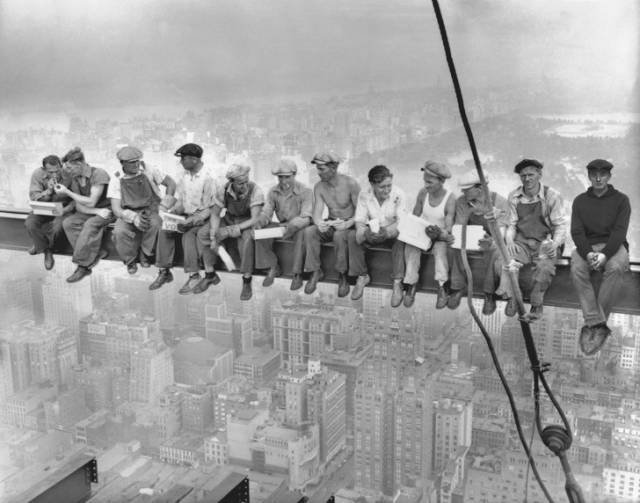 One of the most recognizable photos of the 20th century is actually a fake too. Yes, these are the real workers sitting there, but it’s not a documentary photo from building a skyscraper. Archivists started to have doubts about this photo when they found out that there was no specific date of when this photo was taken.

There are 2 estimated dates: the 20th and 29th of September 1932. And there is no approved photographer of this photo. It’s been narrowed down to 3 possible people. That’s why now archivists are sure that this photo was staged. There is also a version where it was advertising the new skyscraper which was specially made by the order of Rockefeller Center. 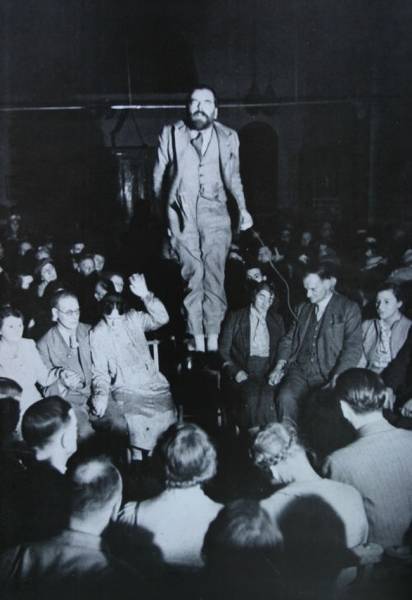 Colin Evans was a spiritualist who, as many people believed, could levitate. Colin arranged spiritualistic sessions where he had a lot of fans surrounding him in darkness and chanting. At a certain moment there was a flash of light when everybody could see him levitating.

For a long time there were a lot of believers who were sure that his levitation was real, until some skeptics noticed a cord in every photo, running out of the sleeve of Colin Evans. They finally guessed that Colin was simply pressing the flash button and jumping at that moment. 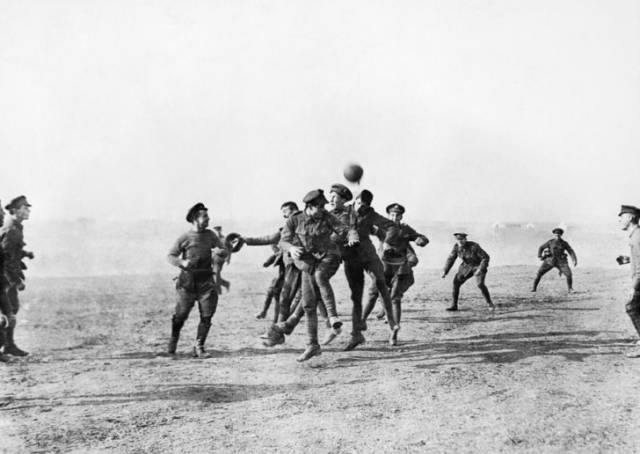 When this photo appeared on the internet everybody believed that it was a football game during the WWI between German and British soldiers, some thought it was a Christmas Truce, as everybody called it. But in reality, there were no Germans, and this photo was made in Greece where British soldiers were playing racquetball. 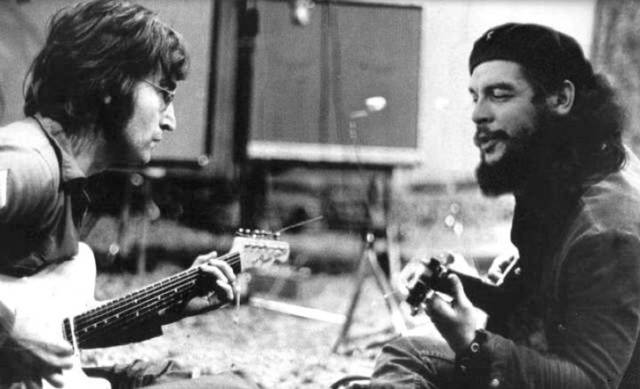 This nice photo of John Lennon and Che Guevara playing guitars together is actually fake too. John Lennon here is real, but of course he wasn’t playing with Che Guevara, somebody just took his head and put it on the body of Wayne Gabriel. So in reality, this photo was made when John was playing with Wayne. Poor fans, a lot of people believed that this is a real photo.

“Kennedy and Monroe together, part 2”
9 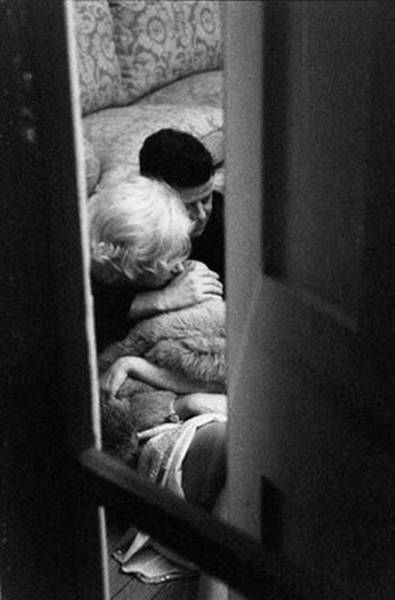 Another work of Alison Jackson that was made popular by gossips about a romance between Kennedy and Monroe. It’s the same scenario as with the previous photo. Alison just took lookalikes of John and Marilyn and created this scandalous snapshot. A lot of people believed that the photographer really caught this sweet couple together.

“David Bowie and Lemmy from Motorhead”
10 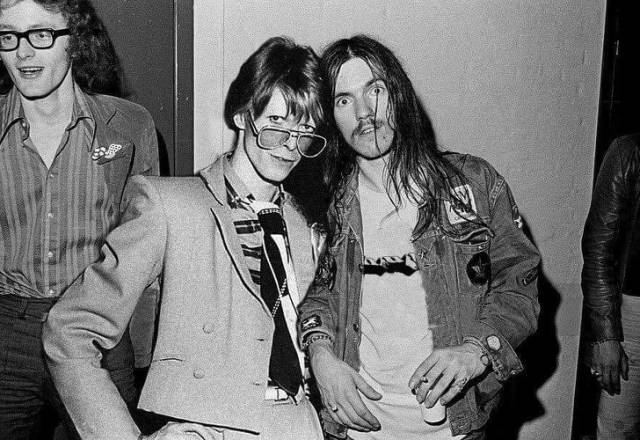 Many people really believed that this is David Bowie and Lemmy from Motorhead in this picture, but of course it’s not true. The truth was found after searching for a source where the photo had been posted for the first time. On Getty Images, you can find the real photo, where Lemmy stands near his girlfriend and it was made in June of 1972, so David Bowie was just added instead of Lemmy’s girlfriend. 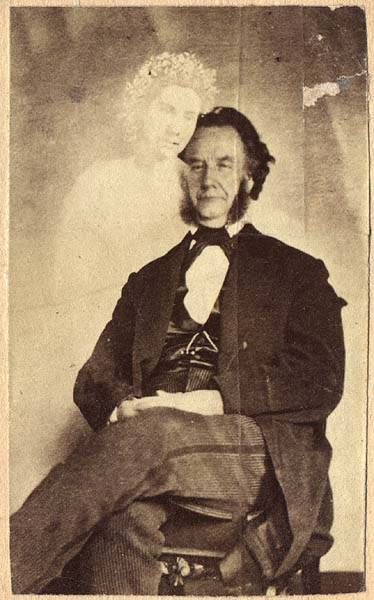 William H. Mumler became famous because of his series of photos with spirits. His clients were people like: Mary Todd Lincoln, ex-US President Abraham Lincoln, Master Herrod, and John J. Glover. William took photos of all of them with their relatives’ spirits, as everybody believed.

The popularity of the “spirit photographer” went down when Moses A. Dow — the editor of Waverley Magazine came to William to get his portrait done. When Moses got his photo he suggested that the spirit behind his back was Mumbler’s assistant Mabel Warren. After that, people had doubts about the appearance of these ghosts for many years and nobody figured out the truth. After that Mumbler’s reputation was tarnished and he died in poverty. Here, the main problem lies in the context. If you search for this photo on the internet, you’ll read that it’s the first ambulance, but that’s incorrect: somebody wrote this first and everyone else copied. In reality, it’s just an ambulance of a U.S. Navy Yard which was used on Mare Island. 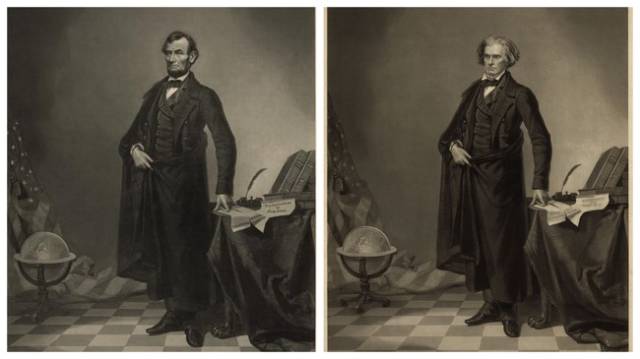 The iconic portrait of the U.S. President Abraham Lincoln was printed in a huge amount of books and it was one of his most famous portraits. It was a real surprise for everyone that this picture was composed from 2 pictures. Somebody just took John Calhoun’s body and added the head of Abraham Lincoln to it. Some think that these 2 friends are William Harley and Arthur Davidson the creators of Harley Davidson. But, of course if it was true, this picture wouldn’t appear in this article. The truth is, these guys are simple guys from Minnesota who had an opportunity to sit on bikes and take a photo.