History Of Photography In Pictures (19 pics) 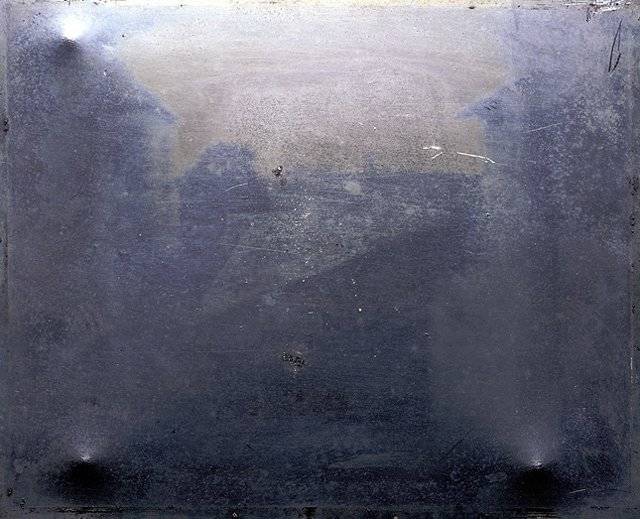 The world’s first photograph made in a camera was taken in 1826 by Joseph Nicéphore Niépce. The photograph was taken from the upstair’s windows of Niépce’s estate in the Burgundy region of France. This image was captured via a process known as heliography, which used Bitumen of Judea coated onto a piece of glass or metal; the Bitumen than hardened in proportion to the amount of light that hit it. 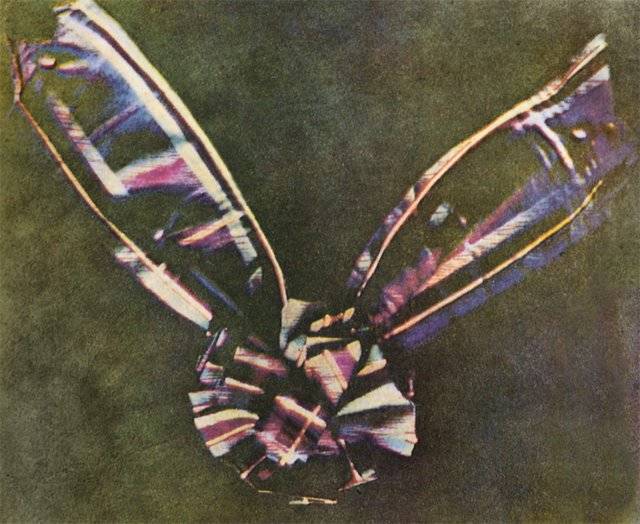 The first color photograph was taken by the mathematical physicist, James Clerk Maxwell. The piece above is considered the first durable color photograph and was envied by Maxwell at a lecture in 1861. The inventor of the SLR, Thomas Sutton, was the man who pressed the shutter button, but Maxwell is credited with the scientific process that made it possible. For those having trouble identifying the image, it is a three-color bow. 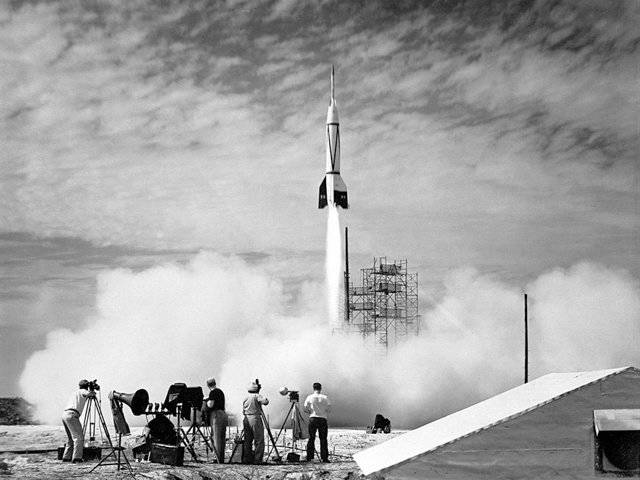 NASA photographers snapped the first photograph of a Cape Canaveral launch in July of 1950. The rocket being launched was known as the ‘Bumper 2’; it was a two-stage rocket comprising a V-2 missile based and a WAC Corporal rocket. The shot also clearly showcases other photographers lined up and ready to get their images of the event. 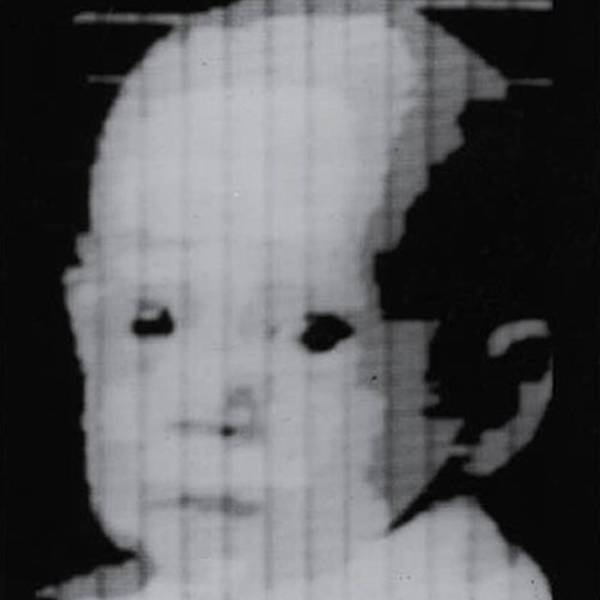 The first digital photograph was taken all the way back in 1957; that is almost 20 years before Kodak’s engineer invented the first digital camera. The photo is a digital scan of a shot initially taken on film. The picture depicts Russell Kirsch’s son and has a resolution of 176×176 – a square photograph worthy of any Instagram profile.

The First Photograph of a Person 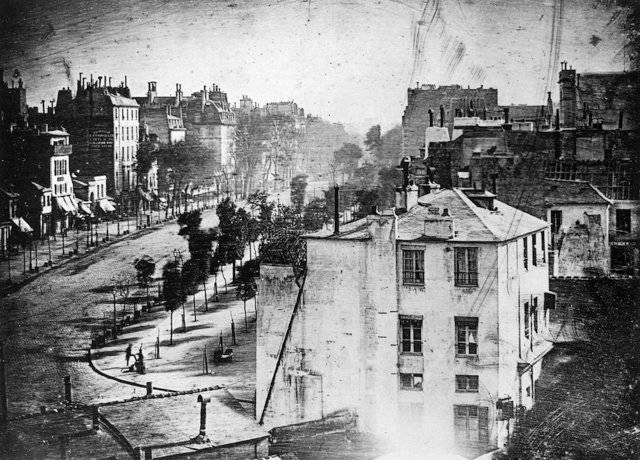 The first photograph of a human appeared above in a snapshot captured by Louis Daguerre. The exposure lasted around seven minutes and was aimed at capturing the Boulevard du Temple, a thoroughfare in Paris, France. Due to the long exposure time, many individuals who walked the street where not in place long enough to make an impression. However, in the lower left of the photograph we can see a man standing and getting his shoe’s polished. Further analysis of the picture later found a few other figures – can you find them?

The First Self Portrait Photograph 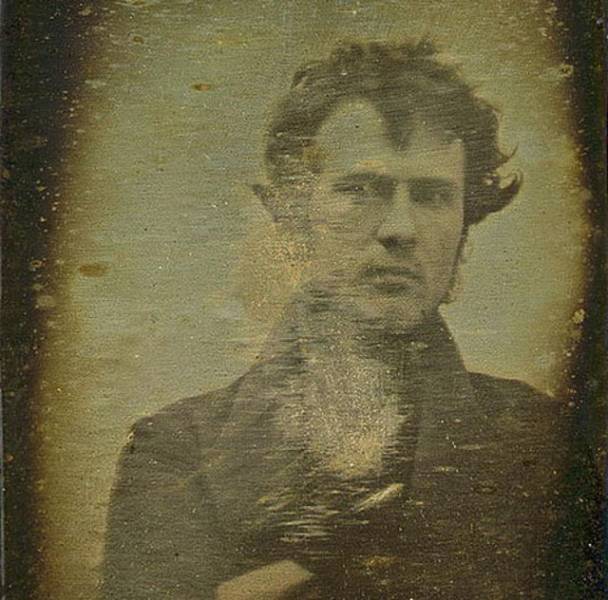 Before ‘selfies’ were all the rage, Robert Cornelius set up a camera and took the world’s first self-portrait in the back of a business on Chestnut Street in Center City, Philadelphia. Cornelius sat in front of the lens for a little over a minute, before leaving the seat and covering the lens. The now iconic photograph was captured 170+ years ago in 1839. 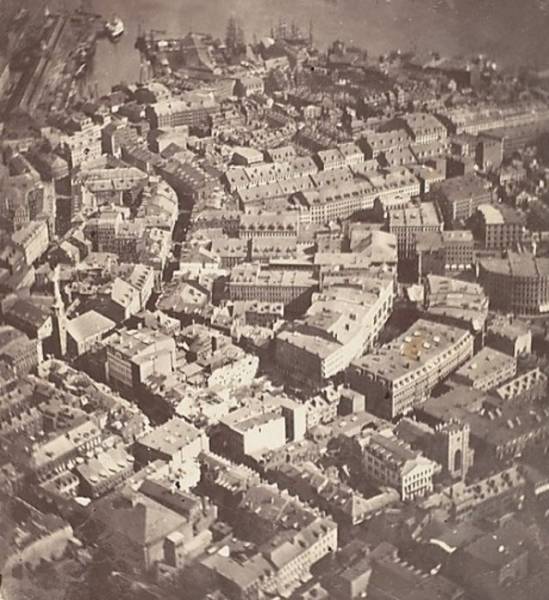 The first aerial photograph was not taken by drone, but instead by hot air balloon in 1860. This aerial photograph depicts the town of Boston from 2,000 feet. The photographer, James Wallace Black, titled his work “Boston, as the Eagle and the Wild Goose See It”. 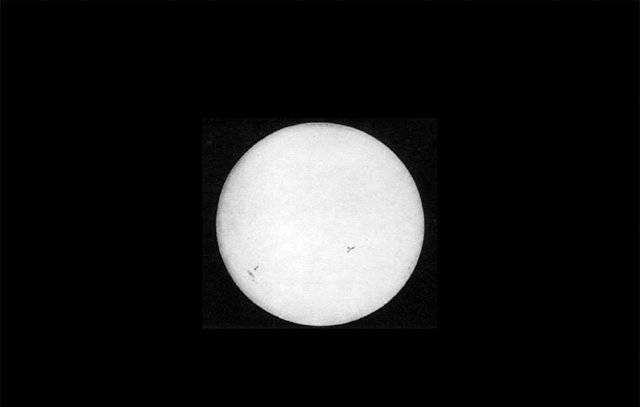 The first photograph of our sun was taken by French Physicists Louis Fizeau and Leon Foucault on April 2nd, 1845. The snapshot was captured using the Daguerreotype process (don’t tell Bayard) and resulted after a 1/60 of a second. If you observe the photograph carefully, you can spot several sunspots. 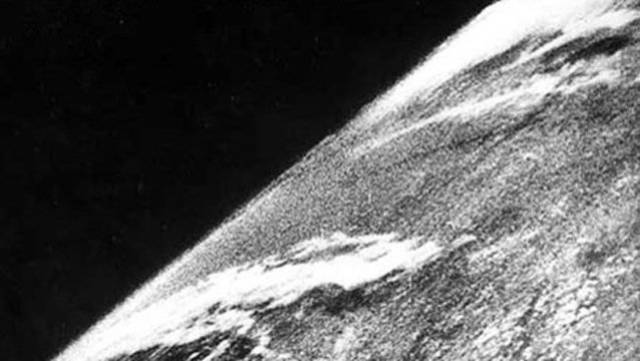 The first photograph from space was taken by the V-2 #13 rocket, which was launched in October, 24th of 1946. The photo depicts the Earth in black-and-white from an altitude of 65 miles. The camera that captured the shot was a 35mm motion picture camera that snapped a frame every second and a half as the rocket climbed straight up into the atmosphere. 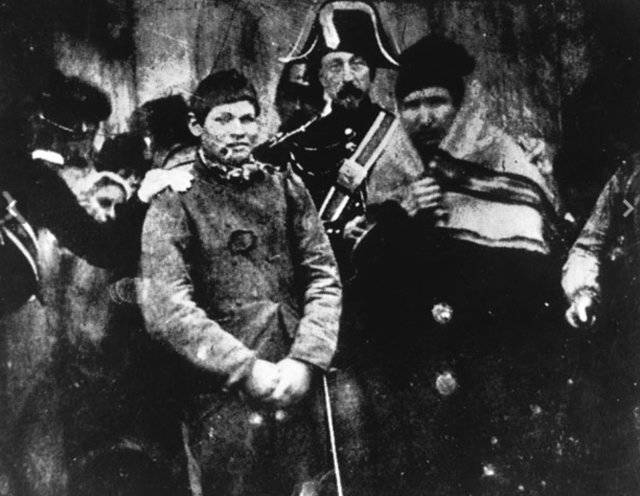 While the photojournalist’s name may have slipped away, his work has not. This photograph taken in 1847 via the Daguerreotype process is thought to be the first ever photograph taken for the news; it depicts a man being arrested in France. 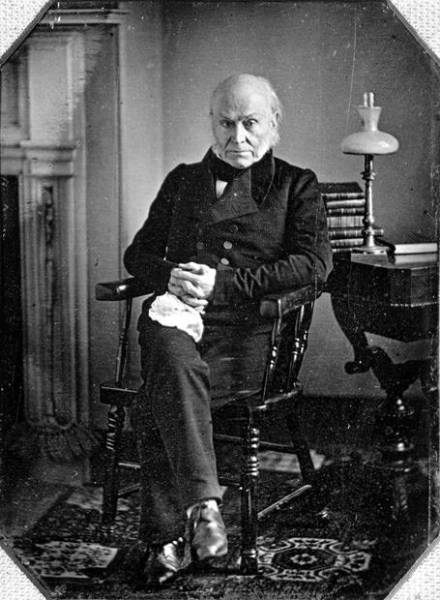 John Quincy Adams, the sixth President of the United States, was the first president to have his photograph taken. The daguerreotype was shot in 1843, a good number of years after Adams left office in 1829. The first to have his picture taken in office was James Polk, the 11th President, who was photographed in 1849. 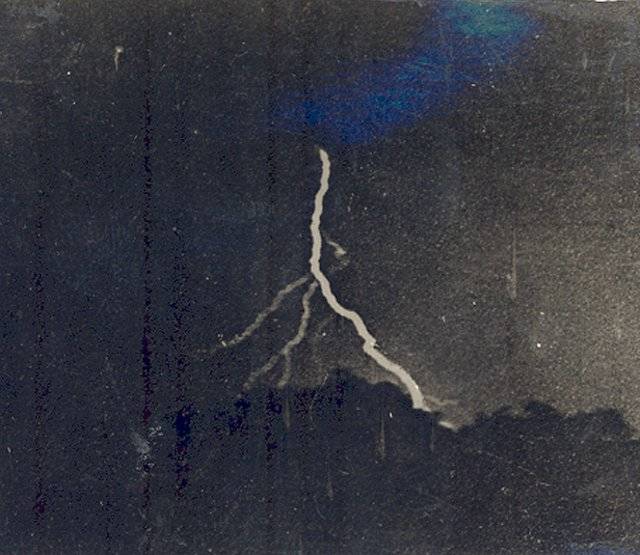 Lightning can be an exciting subject to capture and the first photographer to grab a snapshot did so in 1882. Photographer, William Jennings, used his findings to showcase that lightning was much more complicated than originally thought – notice how the lightning branches out in the above piece. 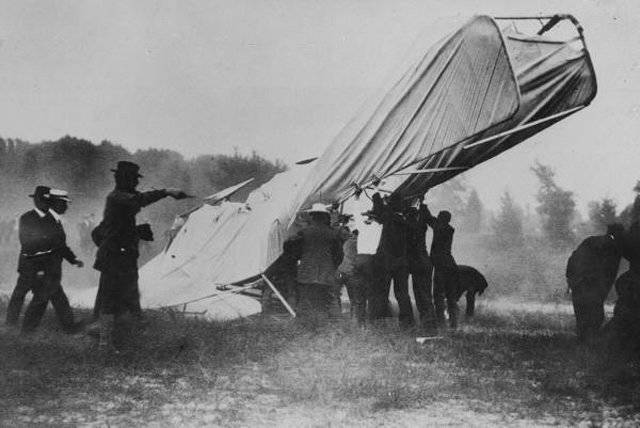 Disaster photograph may not be the most pleasant of subjects, but we can learn from our past mistakes. This photo from 1908 showcases the death of Aviator Thomas Selfridge. The plane was an experimental design by the Aerial Experimental Association, which was part of the US Army. The plane was also carrying Orville Wright when it crashed; however, he survived. 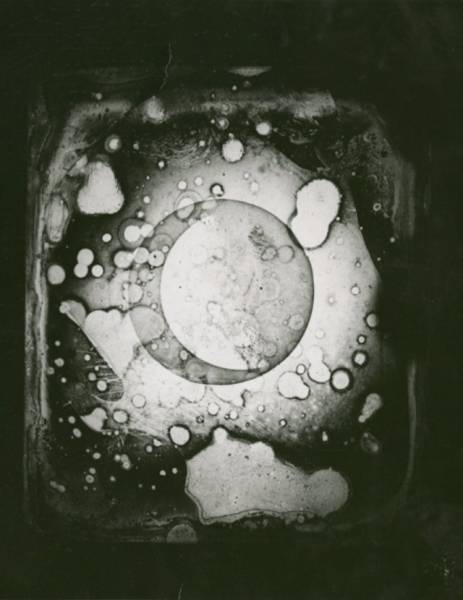 The first photograph of the moon was taken by John W. Draper on March 26, 1840. The photograph was a Daguerreotype that Draper took from his rooftop observatory at New York University. The image has, since then, appeared to acquire a significant amount of physical damage. 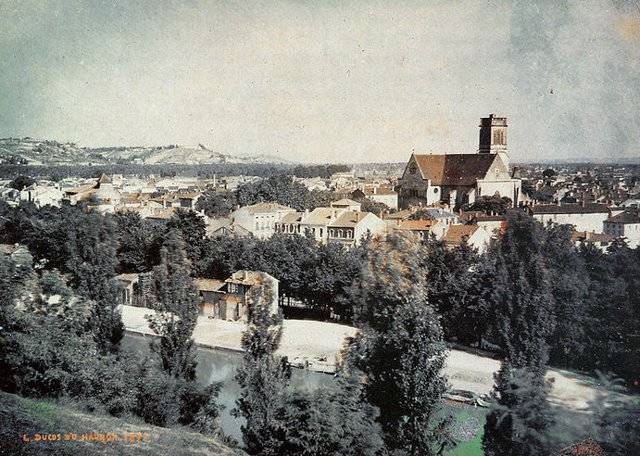 The first colored landscape to showcase the world in color was taken in 1877. Photographer, Louis Arthur Ducos du Hauron, was a pioneer in color photography and was the mastermind behind the process that created this photo. The shot depicts southern France and is appropriately titled “Landscape of Southern France”.

The First Photograph of Earth from Moon

The Earth was photographed from the Moon in all its glory on August 23rd, 1966. A Lunar Orbiter traveling in the vicinity of the Moon snapped the shot and was then received at Robledo De Chervil in Spain. This was the Lunar spacecraft’s 16th orbit around the Moon.

Nature can be a destructive force, and this image of a Tornado was taken in 1884. The photographer was captured by a local fruit farmer living in Anderson County, Kansas. The amateur photographer, A.A. Adams, assembled his box camera and took the photograph 14 miles from the cyclone.

The First Photograph from Mars

The first image of the planet Mars was taken by Viking 1 shortly after it touched down on the red planet. The photograph was taken on July 20th, 1976, as NASA fulfilled its mission to obtain high-resolution images of the planet’s surface. The images were used to study the Martian landscape and its structure. 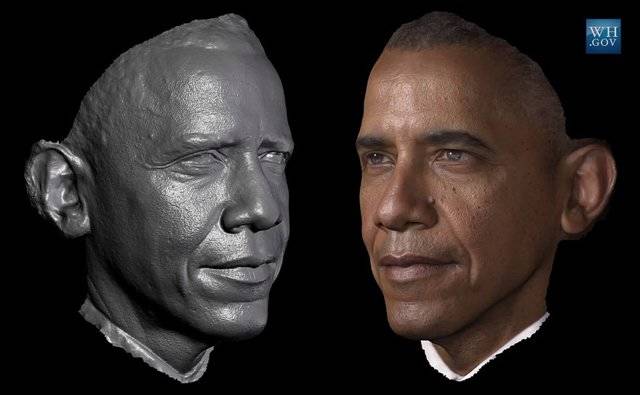 Computer experts from the Smithsonian and the USC Institute for Creative Technologies teamed up to take the first 3D Presidential Portrait. The shot of Barrack Obama utilized a custom-built 50 LED light array, eight ‘sports’ cameras, and six wide angle cameras. The photograph was than 3D printed and is available for viewing at the Smithsonian.