Sinbad: from an ordeal to a new home. 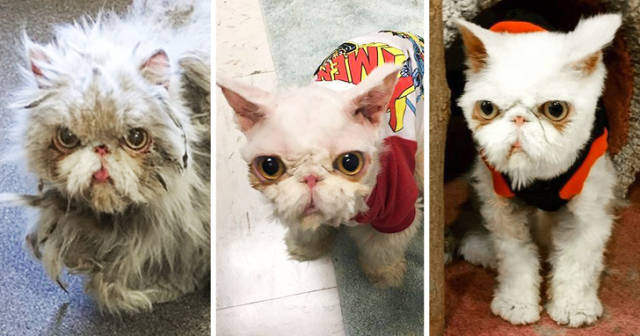 When the Anti-Cruelty Society in Chicago saved Sinbad the Persian cat, it took them 2 sittings and more than 4 hours to trim his fur. After the cat lost almost 5 pounds of fur, he had to learn how to walk on his back legs again. Elliott Serrano took the cat from the shelter, initially planning to foster him until he finds its new home, but he ended up falling in love with Sinbad and in the end, he adopted the cat himself. 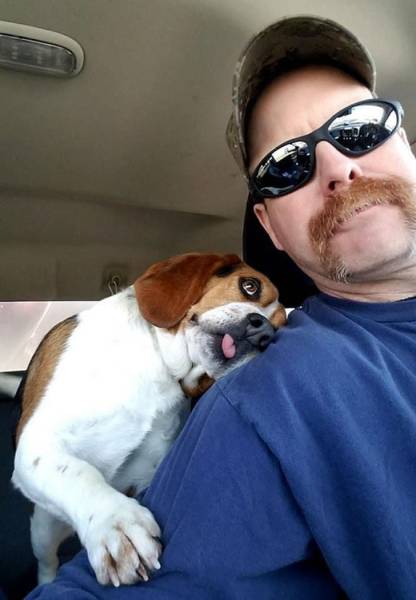 Gregory was scheduled to be euthanized at the local shelter when Joe came to his rescue. He brought the beagle to HOUND Rescue and Sanctuary where dogs can live without the threat of euthanasia. The dog seems to be very happy and appreciative as he hugs his savior during his freedom ride.

Roux: before and after the animal shelter. 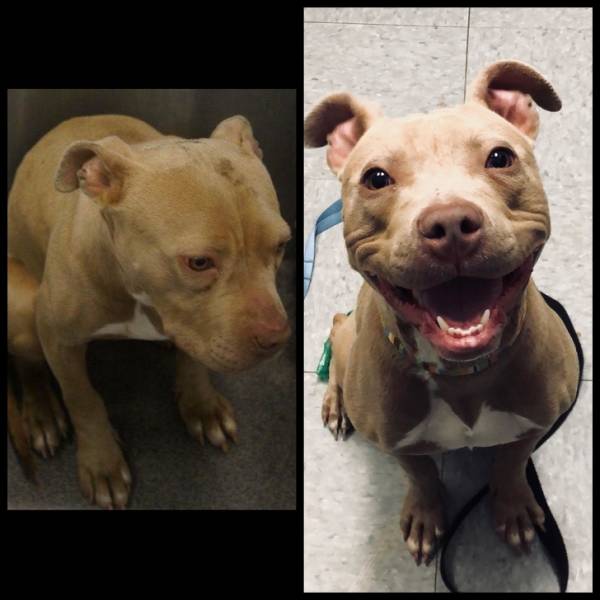 Roux was clearly suffering in the shelter, but look how happy he is now! Do you still believe that dogs can’t smile?

Komari: a happy life with 5 ferrets. 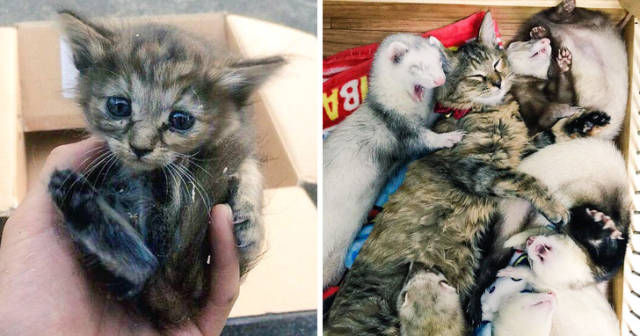 This stray kitten was found by a family who already had 5 male ferrets at home. The ferrets were really happy about their new sister and accepted her immediately. Komari grew up believing she is a ferret and she enjoys sleeping with and hugging her brothers even though she is a bit bigger in size now.

From a trash bin to a new home 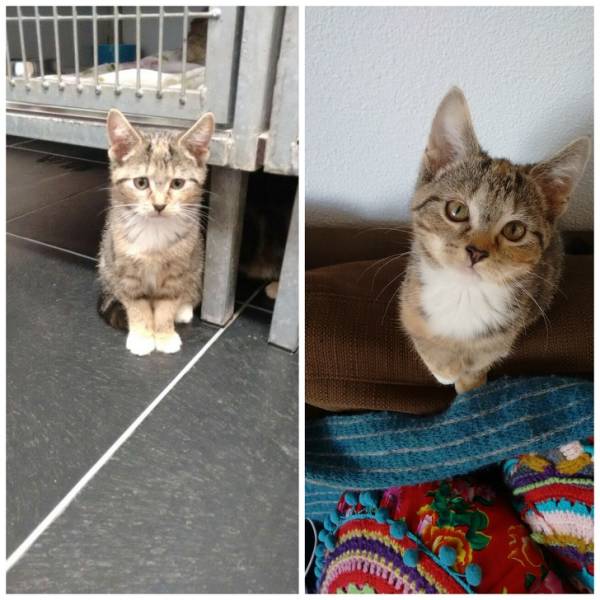 Unfortunately, we don’t know the name of this beauty, but she was apparently ditched in a garbage bin, found and taken to a shelter, and then finally adopted by a loving family. She definitely looks much more content now!

Charlie: from a shelter dog to an Instagram inspiration. 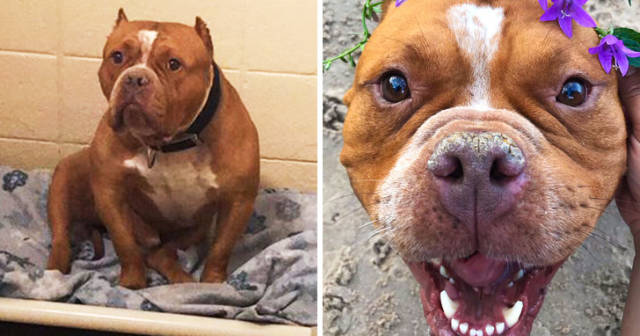 When Meriah shared a before-and-after picture of a shelter dog her sister adopted with the message: “Adopt don’t shop,” she didn’t expect the photos to go viral. When people saw adorable pictures of Charlie the pit bull, they started sharing the photos and stories of their own saved animals.

Patches: from a shelter dog to the pride of his family. 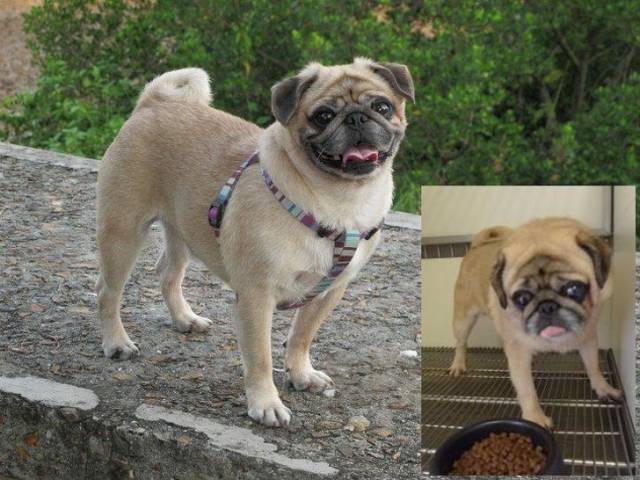 The owner of Patches proudly shares a before-and-after picture of his adopted pug.

Silas: from an abandoned kitten to a huge and fluffy cat. 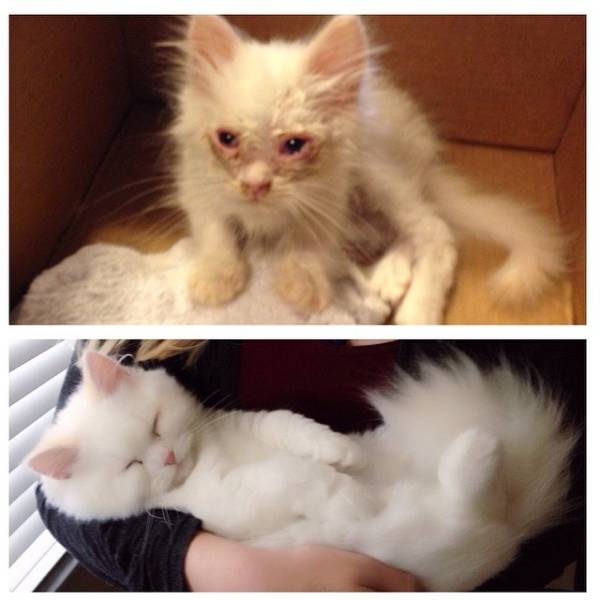 Silas was found on the side of the road, looking very ill and miserable and truly on the verge of death. When his new owners cleaned him up, they realized how fluffy he is. Now the cat is the part of the family and even has his own Instagram page.

“From a skinny feral dog to a beautiful goofball” 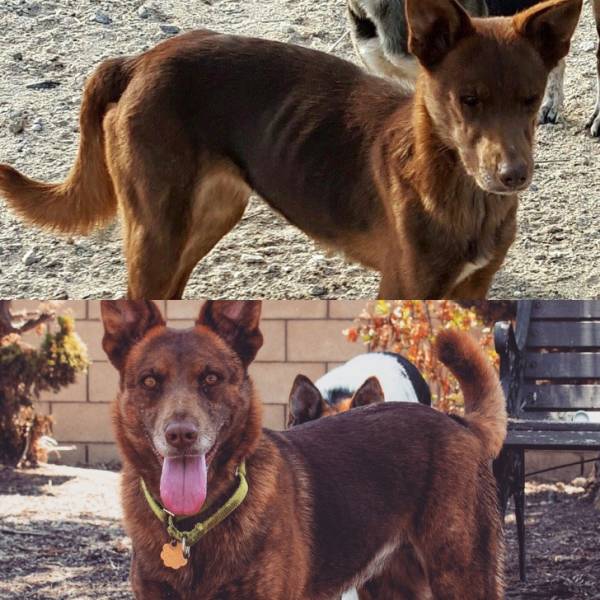 These pictures were shared by Reddit user portatardis. He volunteered at the shelter and befriended the dog. He felt sad when the dog was adopted since he had to depart from her, but was really pleased to see how loved and happy she looked in her new home.

Magoo: from an orphan alone in the fields to a happy kitten. 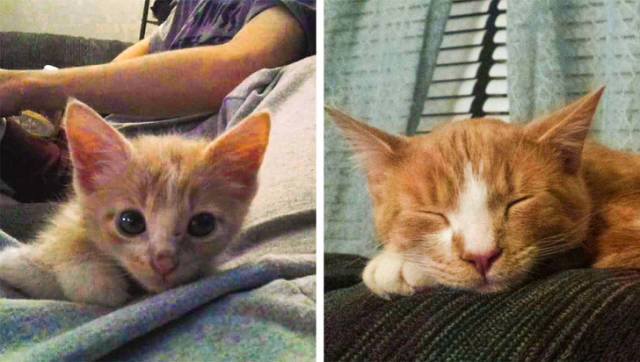 The owner of Magoo had recently lost his cat when he heard that somebody found a motherless litter of kittens in a field. Magoo was the only boy in this litter, very sick and infected with fleas and worms. Now he is 6 months old, but is already big, fluffy, and very loving!

Tucker: from a thin stray pup to a smiling dog. 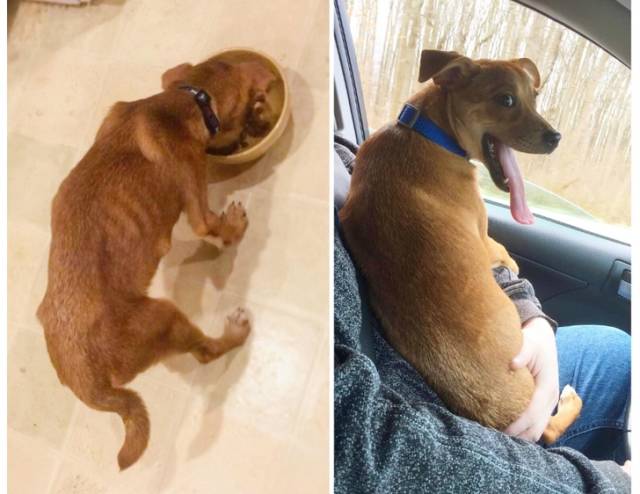 Tucker and his parents were found wandering the roads in South Carolina just before it was too late to save them. When he was brought to his future owners, he weighed only 8 lb, while for his breed mix he should have been around 15 lb. Now he is loved and, according to his owner, is constantly smiling. His parents found their new homes, as well.

From an unwanted dog to a lovable mini-werewolf. 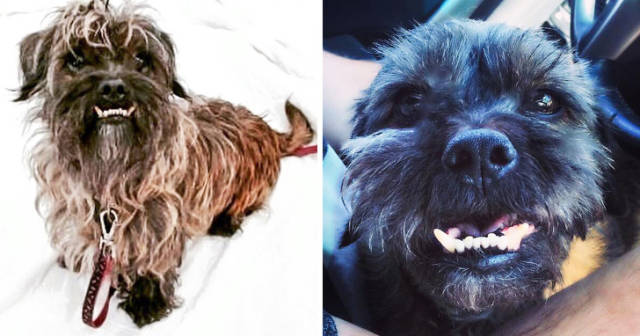 This dog was abandoned in the shelter because the previous owners didn’t like his teeth. He had just turned 8 years old and it was difficult to find him a new home. His current owner loves him dearly and she is proud to call him her “mini-werewolf.”

Leia: from a homeless cat to a spoiled princess. 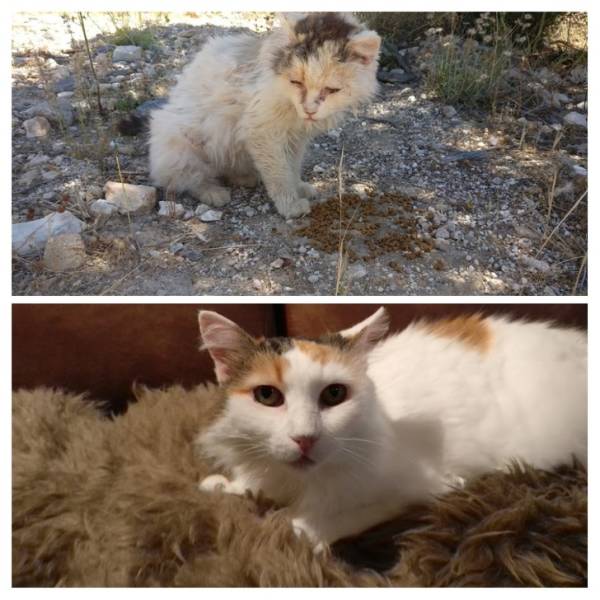 Norwegian tourists were traveling in Greece when they found Leia, a very sick, starving, and bleeding cat. They brought her to the vet and tried for several months to find a local home for her through social media and local shelters. When they found out that nobody took her, they arranged for all vaccines and brought Leia to Norway, proving the truth in the saying that you remain forever responsible for the life you save.

Bella: from a neglected pup to a favorite dog. 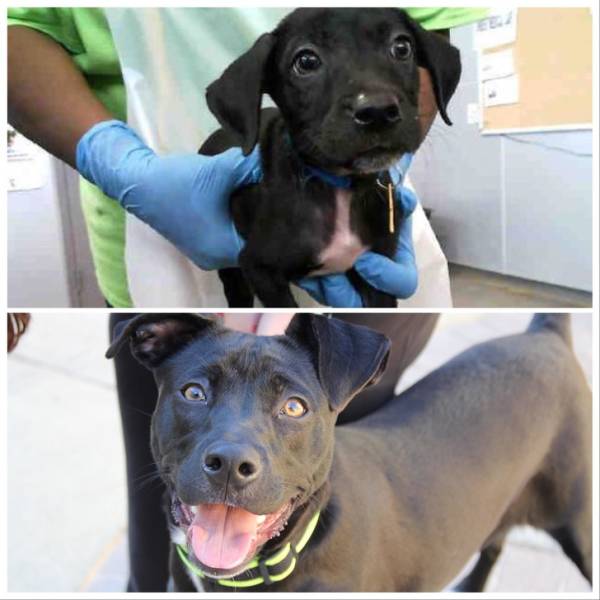 Bella’s owner first met her in the shelter where he learned that she had been brought in at the age of 2 months by a man whose daughter had abandoned the dog. He adopted the dog and she now lives with him and his girlfriend in their apartment.

Benny: a special cat that nobody wanted. 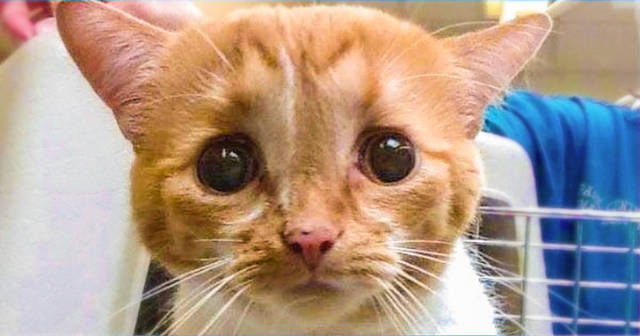 When Benny’s owner had passed away, he and his siblings were left alone. It was difficult to find new owners for Benny, as the cat was blind and had hydrocephalus, a special brain condition. Milo’s Sanctuary took Benny in and gave him all the love he needed. Unfortunately, his condition got worse with time and he died at the age of 5. 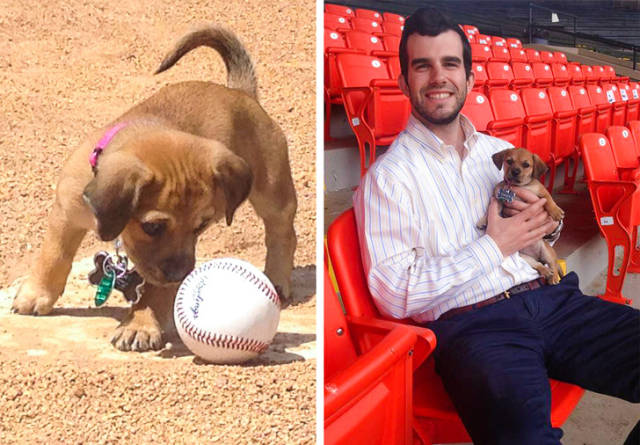 Daisy, a 7-week-old puppy, was found in the Grayson Stadium parking lot by a staff member. The president of the Savannah Bananas team decided to adopt her into his family and turn her into the team dog.

Jake: from a fire victim to a firefighter. 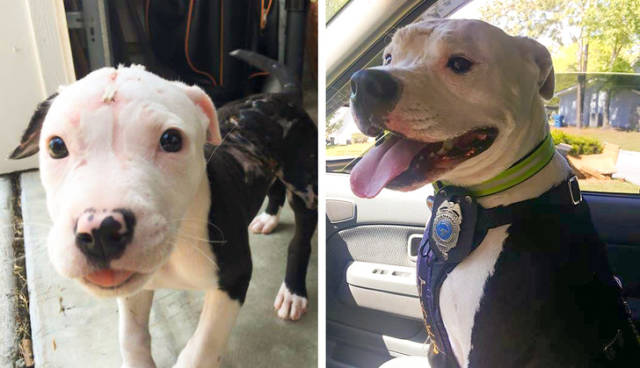 A tiny puppy, only 3 weeks old, was saved from a fire by firefighter Bill Lindler. Bill adopted the dog and it became the official mascot of the Fire Department. Jake even got his own badge!

Penguin the magpie: saved by humans. 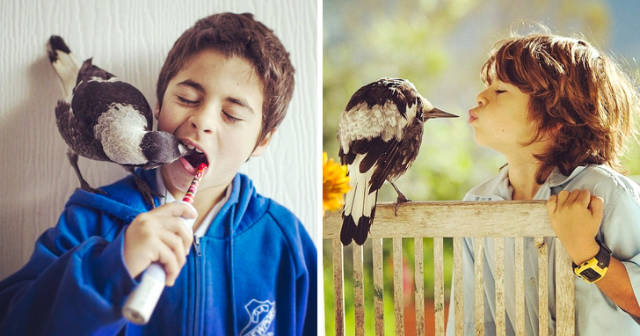 Penguin was a little magpie chick when she fell from her nest and was found by a boy named Noah. Noah’s family built a new nest for Penguin in their house and decided to look after the injured bird. The bird was never locked but still chose to sleep inside the house even when she got stronger.

In the end, she occupied a frangipani tree in the yard next to the house. Now she leaves occasionally for several weeks but she always comes back.