Some Actors Play One Role All The Time (18 pics) 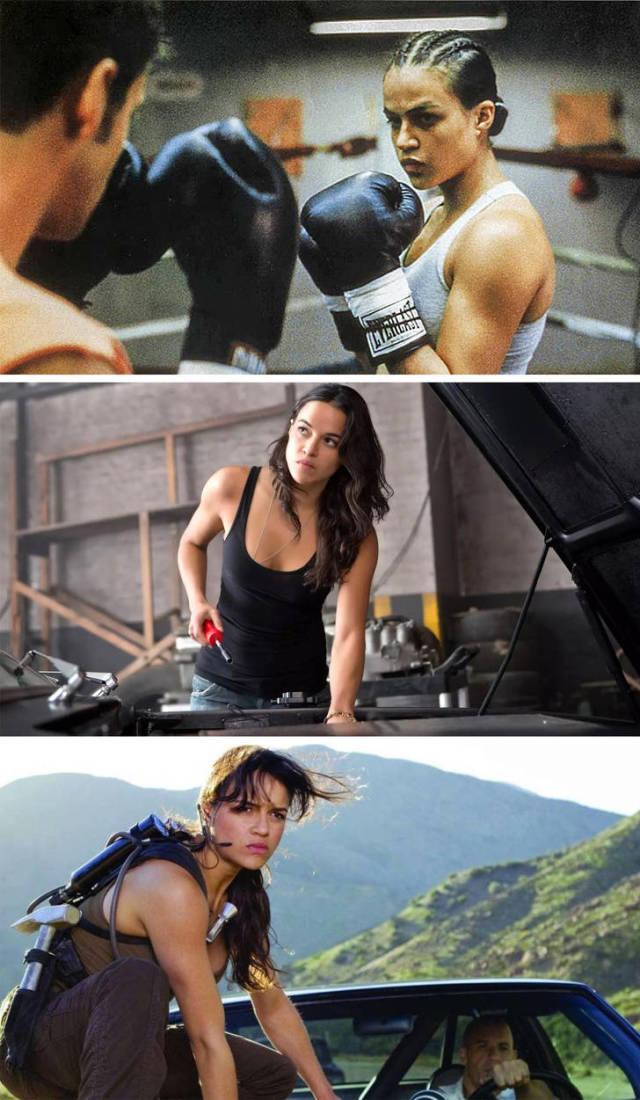 Whether it’s Girlfight (2011), The Fast and Furious series, Resident Evil, or Avatar (2009), you’ll always see Michelle Rodriguez playing the character of a badass woman who’s tough to crack. She can punch, she can kick, and she’s surrounded by guns and explosives. Michelle explains why she chooses these power-packed roles, “Throughout my 15-year career, I’ve always had this battle. I represent this specific demographic: Tomgirls. You don’t have a lot of them in Hollywood, and audiences respect that. I need to represent those little girls or women who think I’m cool.” 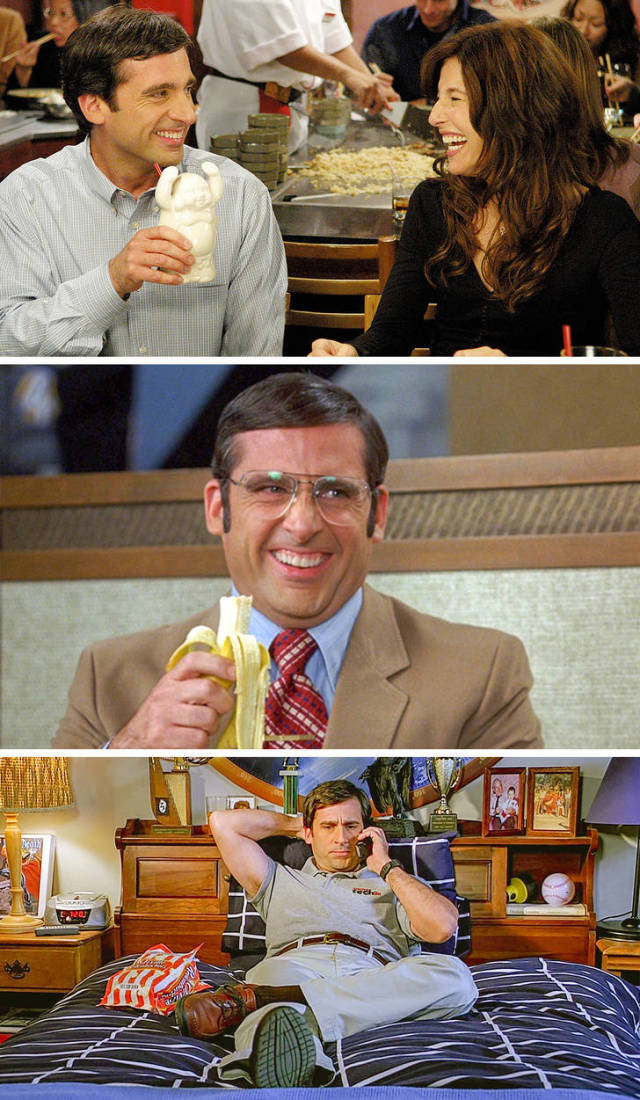 A good guy with a touch of sarcasm and a suit, this is classic Steve Carell. He’s always “a good boy” with perfect comic timing; his characters always have to deal with a girl who leaves him or with him trying the whole movie to get one. Take Crazy, Stupid Love (2011), Get Smart (2008), and 40-Year-Old Virgin (2005) for example. He said, “I never thought that I would become a comedic actor. My intent was to try and make a living as an actor. I sort of fell into the whole idea of comedy. It’s nothing that I ever trained to be or thought I would be.” She’s known to play the roles where she’s basically not rich, always in distress, and working toward making her life right. And she always ends up falling in love with the guy she hates or resists liking — like in Just Go With It (2011), The Bounty Hunter (2010), and The Switch (2010). About her acting career, she said, “I didn’t see myself as anything. I was just trying to get through the day. In sixth grade, I would write skits and act them out with a couple of friends and we thought we were hilarious. Or we would go to Central Park, and when the cherry blossoms were in bloom we would act out scenes from The Wizard of Oz.” 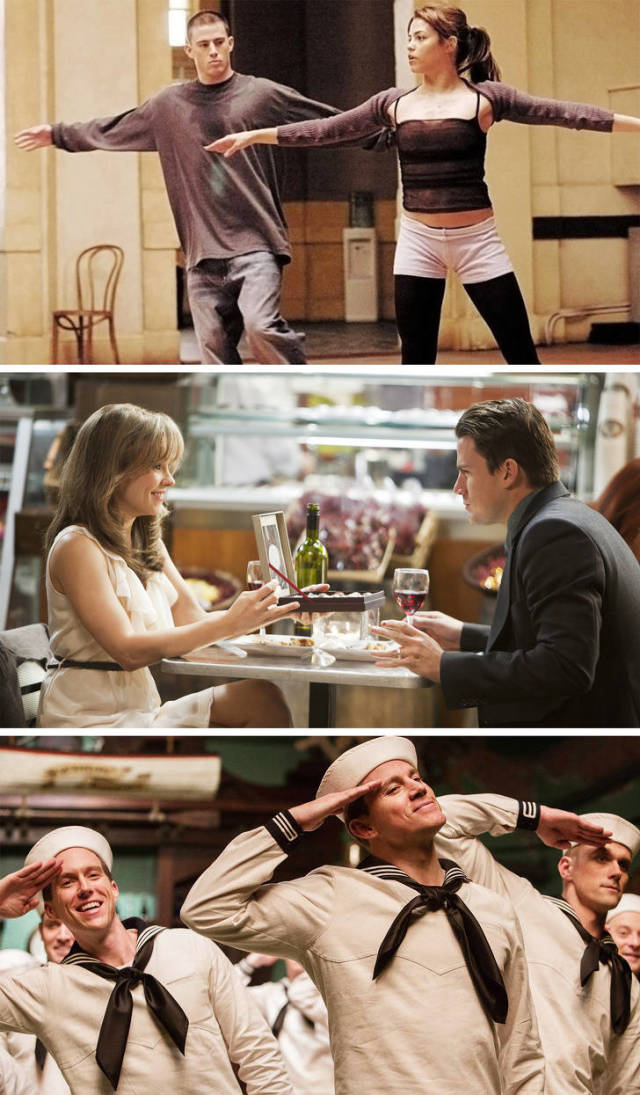 This guy loves to play the eye candy characters. Most of the roles in his life are about being the popular, muscular, cool guy every girl wants — like the Magic Mike series, 21 and 22 Jump Street, Step Up, and Dear John. Although recently he has been trying to change his image and maybe soon he will, but for now, he said, “I’ve done things where I thought they were going to be financially successful, and they failed. For me, the only thing I can be super sure of at the end of the day is whether I’m proud that I made the movie, even if it never comes out.” 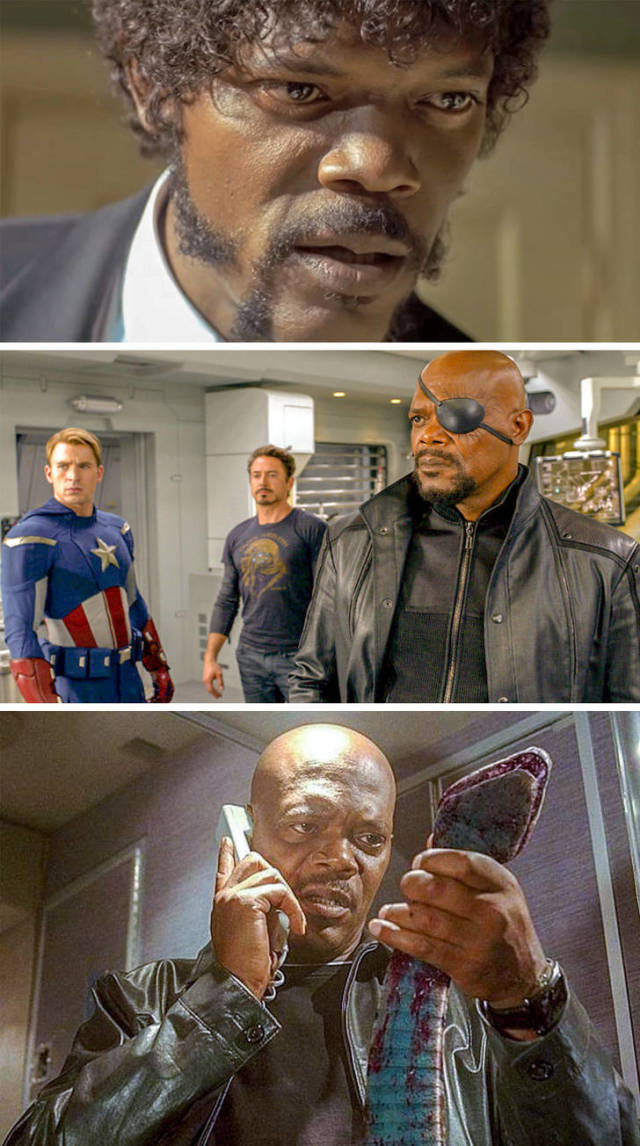 The guy is a born thug, whether it’s real life or movies, nothing can faze him. He usually plays a badass guy with a short temper and who often swears a lot and carries an aura a person of unquestionable confidence. Whether it’s The Hitman’s Bodyguard (2017), Pulp Fiction (1994), or The Hateful Eight (2015), his screen presence is spectacular. Interestingly, in an interview, he said, “I am not as cool as people think I am.” 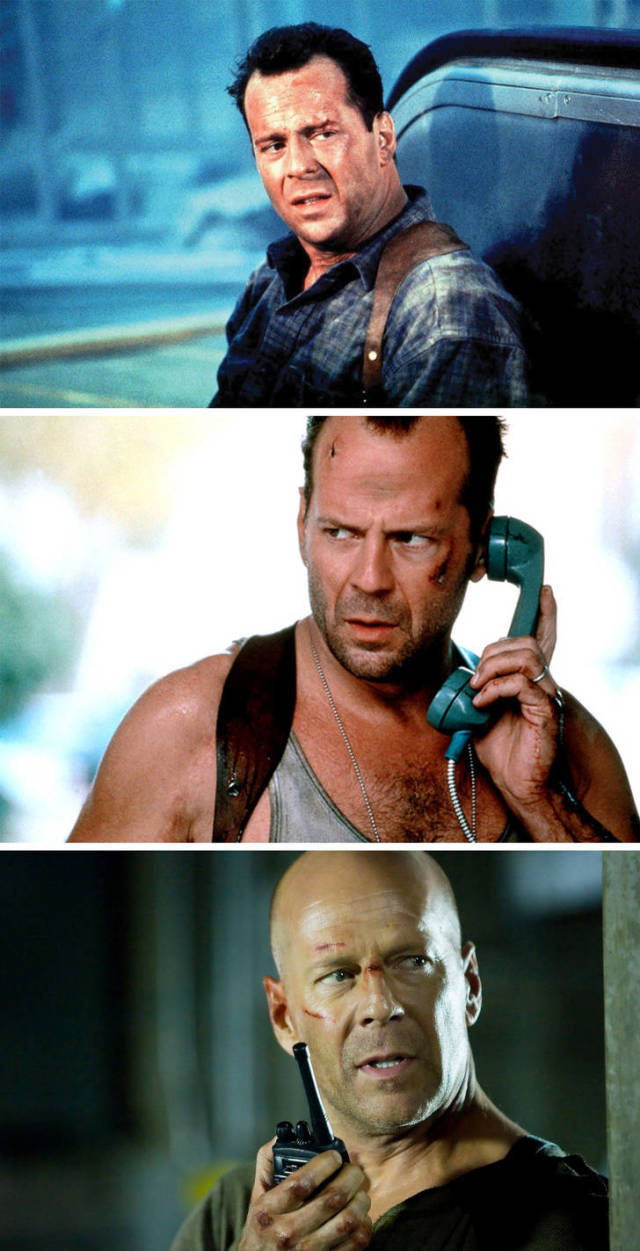 A tough bald badass who’s always caught up in the middle of something he doesn’t want to be a part of but has to deal with it because of his moral principles. His problems are always big, but never big enough to break him. He starred in Die Hard (1988), Unbreakable (2000), and The Fifth Element (1997). On why he prefers action films, he said, “I am very clear with who I am. I work in all sorts of films, but the action movies are the ones that generate the most revenue. I like to earn lots of money from those, but I do all types: small productions, mega-projects, medium-sized, even science fiction.” 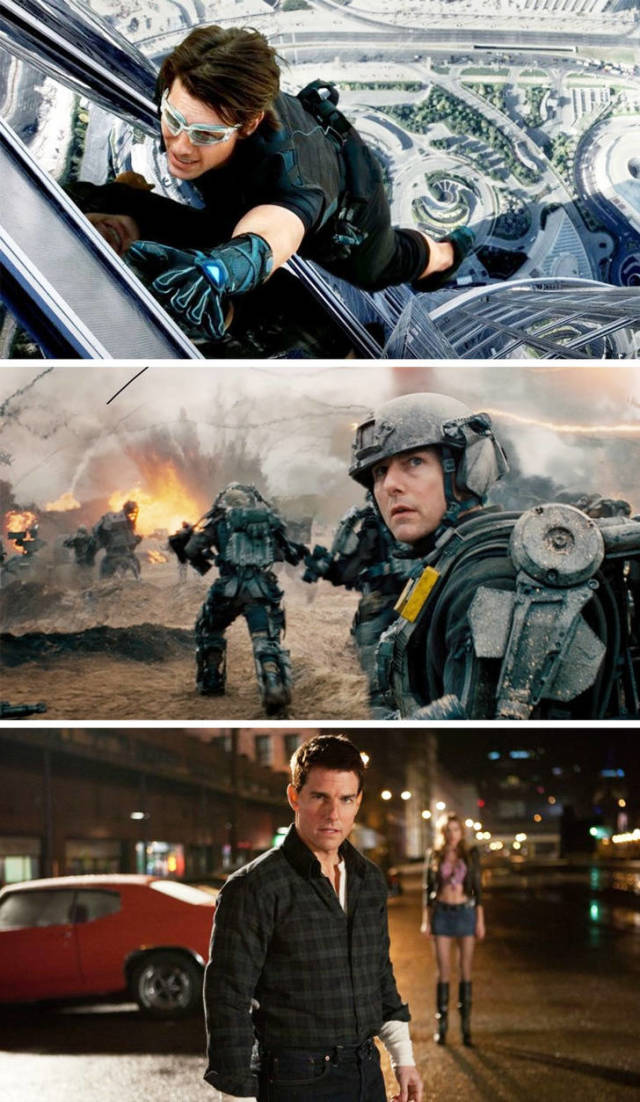 He’s starred in the Mission: Impossible series, Knight and Day (2010), the Jack Reacher series, A Few Good Men (1992), Top Gun (1986), Edge of Tomorrow (2014), and Valkyrie (2008). About his acting career, Tom said, “It’s a strange thing, being handed so much power to do whatever you want to do.” You know what this implies? Whatever character Tom Cruise is chosen to play: military, navy, secret agent, or air force guy, he wants a role where he can do something that thrills him, like performing stunts. 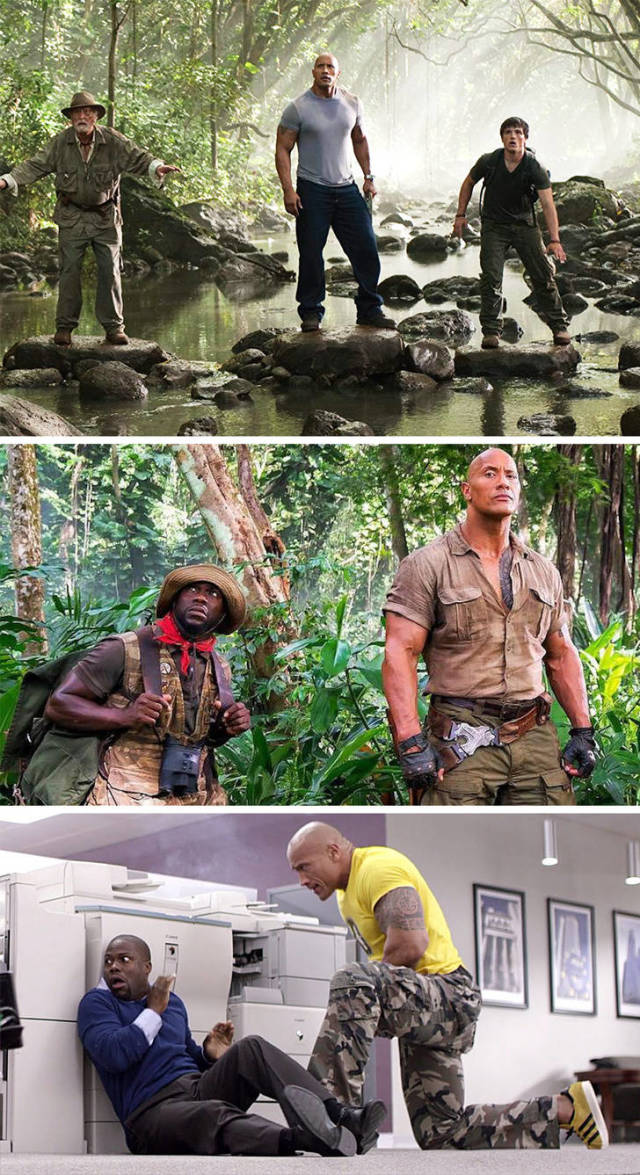 No matter what role you give to this actor, it’s all about the chase: in the city, in a jungle, underwater, in a game, or in a cave! His list includes The Fast and Furious series, Central Intelligence (2016), Rampage (2018), Jumanji: Welcome to the Jungle (2017), the Journey series, and even Moana. He explains his acting choices, “It starts with what’s in my gut, and what’s in my gut is to entertain as many people as I can possibly entertain. Generally, they all have this global appeal — they’re not all home runs. But the essence of them is that they all have global appeal.” 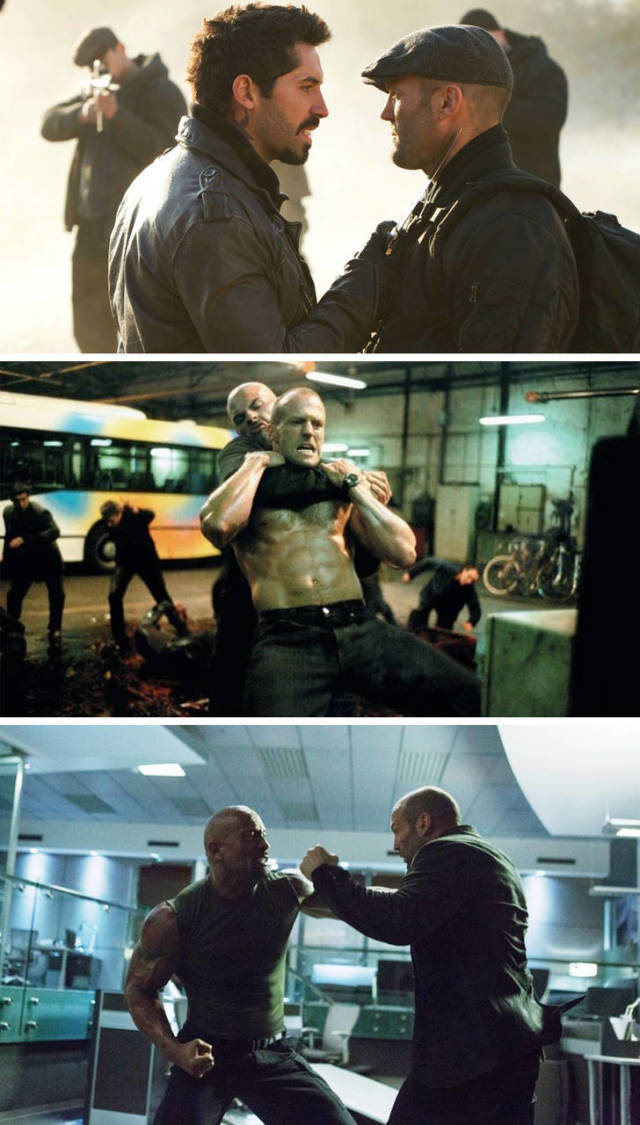 A guy with a British accent who’s indestructible; he likes to drive, hit, shoot, and act smart. He plays in similar types of roles like secret agent, rogue agent, assassin, or transporter. He’s basically James Bond of the non-James Bond movies. You can see him nailing the Mechanic series, the Transporter series, The Fast and the Furious series, and The Expendables series. 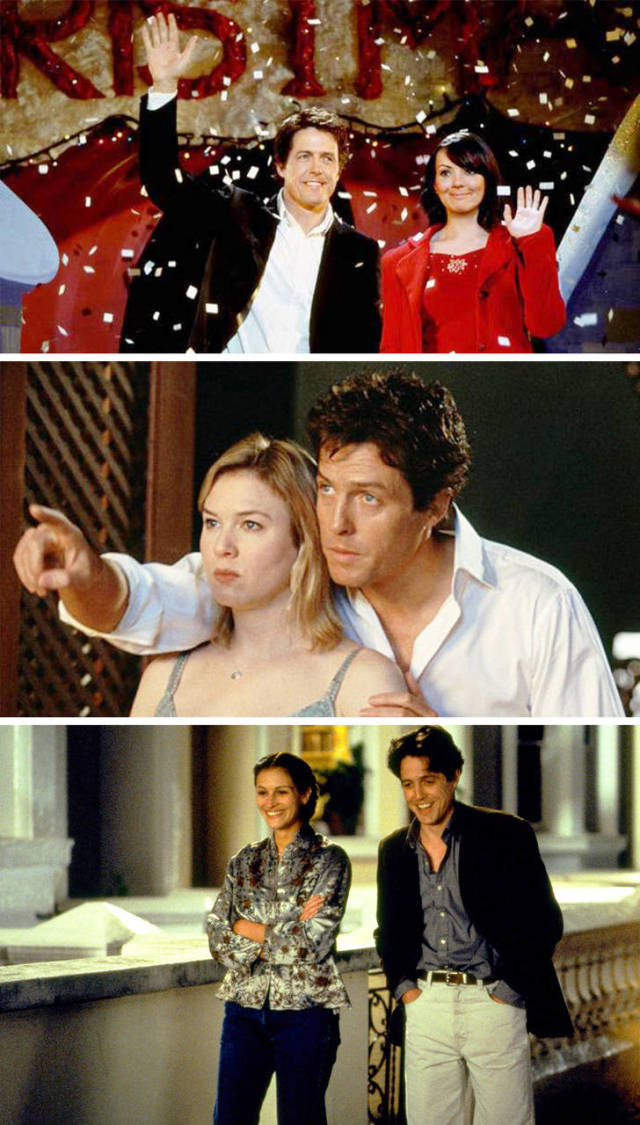 Hugh Grant loves playing an adorable character in a romantic comedy or drama film. His charm and handsome looks make him the perfect chocolate boy in movies like Notting Hill (1999), Bridget Jones Diary, About a Boy (2002), Love Actually (2003), and Two Weeks Notice (2002). He’s in every movie your girlfriend wants to watch with you so be careful, just saying. 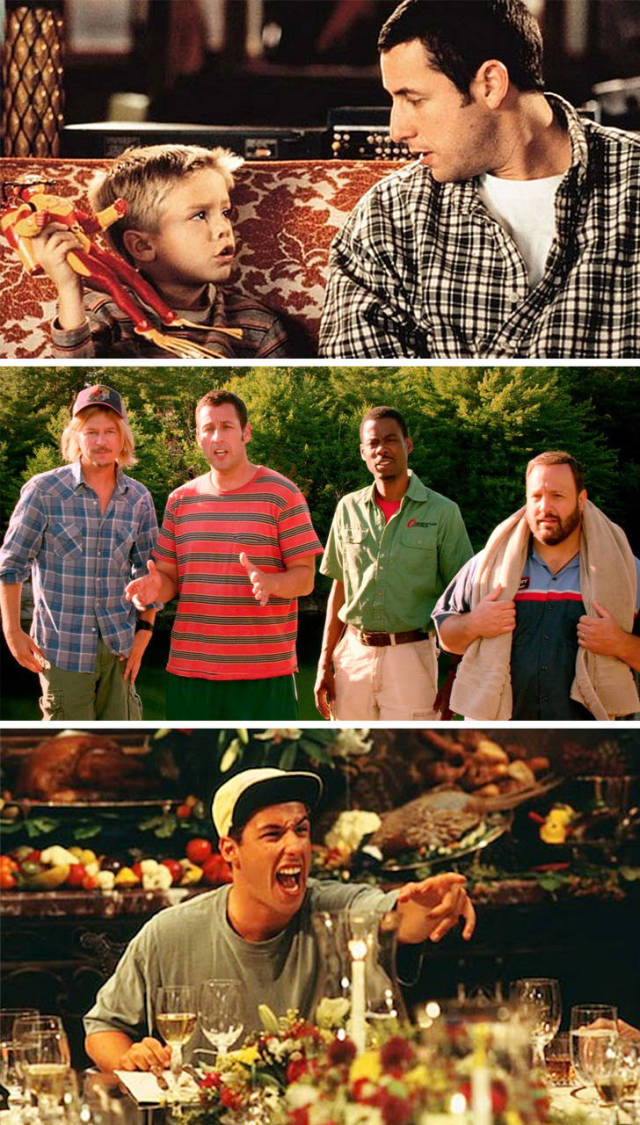 He always plays a funny excited man who often acts like a kid. He’s curious, he wants to learn, he’s like Jon Snow — doesn’t know a lot of things but is valuable to the plot. Grown Ups (2010), Billy Madison (1995), That’s My Boy (2012), and Big Daddy (1999) are among the examples. His movie choices come as no surprise, since he said, “I didn’t get into movies to please the critics. I got into it to make people laugh and have fun with my friends.” 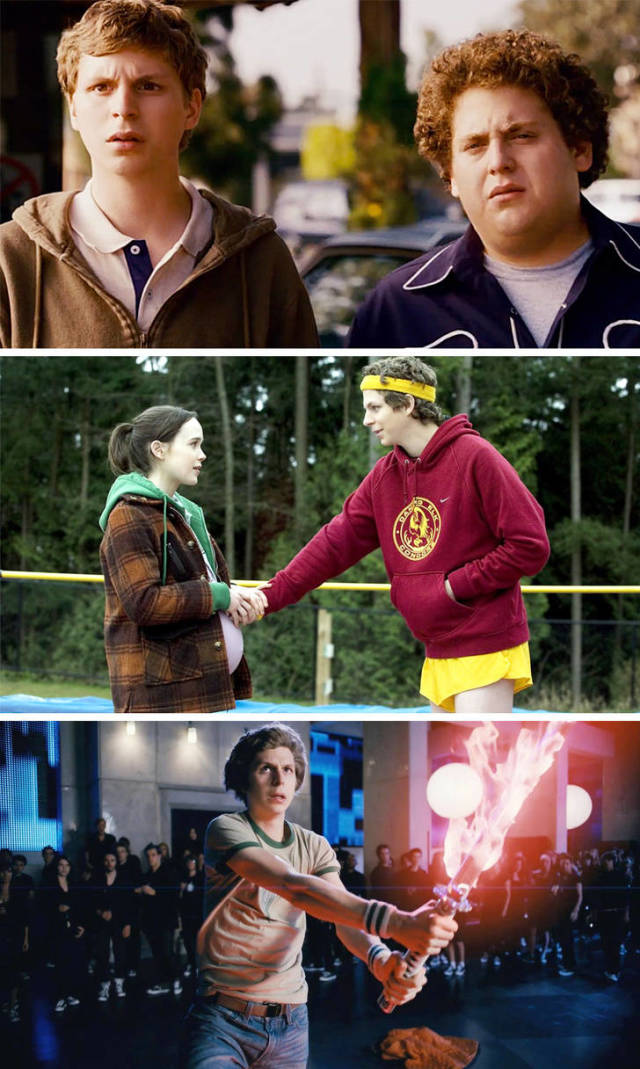 Usually he appears as an awkward, dorky person who’s very sensitive and honest with the people around him. He’s always cast as a hated guy who ends up winning the girl with his innocence and effortless wit. Let us give you examples and you’ll feel like they’re all the same movies — Superbad (2007), Juno (2007), and Scott Pilgrim vs The World (2010). 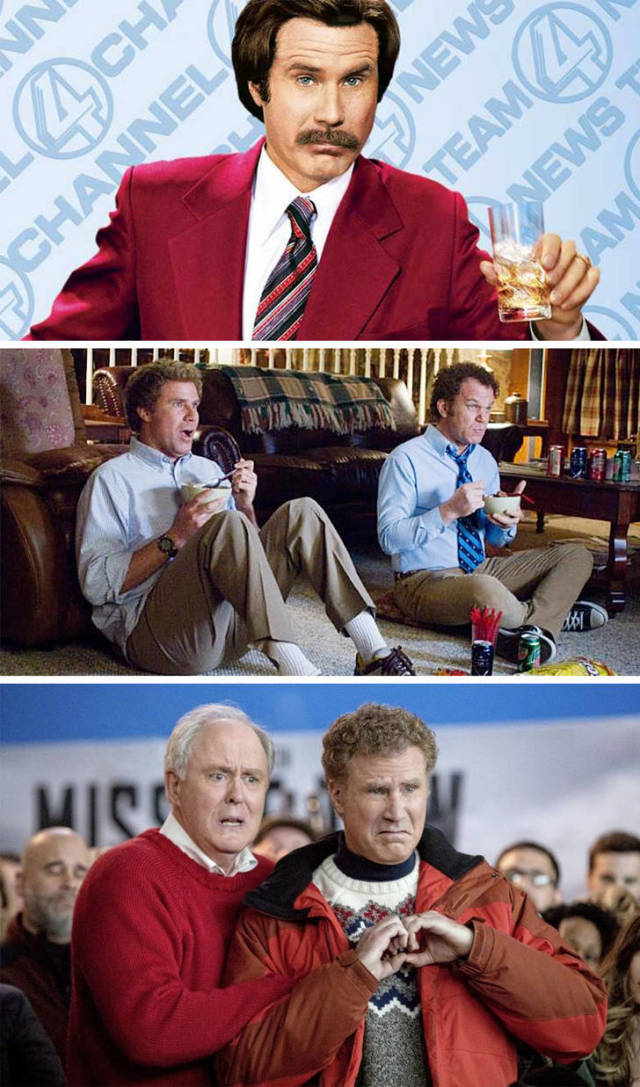 Do you love the awkward middle-aged guy character who’s unexpectedly comedic? Well, just cast Will Ferrell! He’s as awkward as they usually come and as comic as he can be. His most famous one’s include the Anchorman series, Daddy’s Home Series, The Other Guys (2010), Step Brothers (2008), and Zoolander (2001). 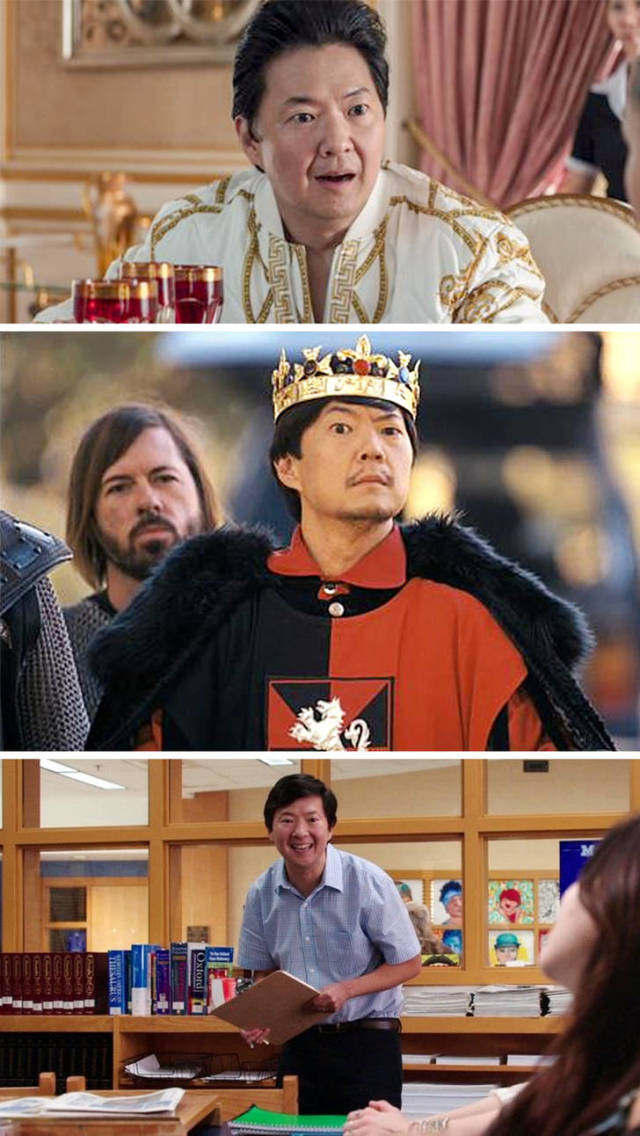 Ken Jeong is an excellent comic but he’s mostly there in movies for 5 minutes or so, but he gives his best and gives you the best 5 minutes of the movie. The Hangover Series, Crazy Rich Asians (2018), The Duff (2015), and Role Models (2008) are some examples. 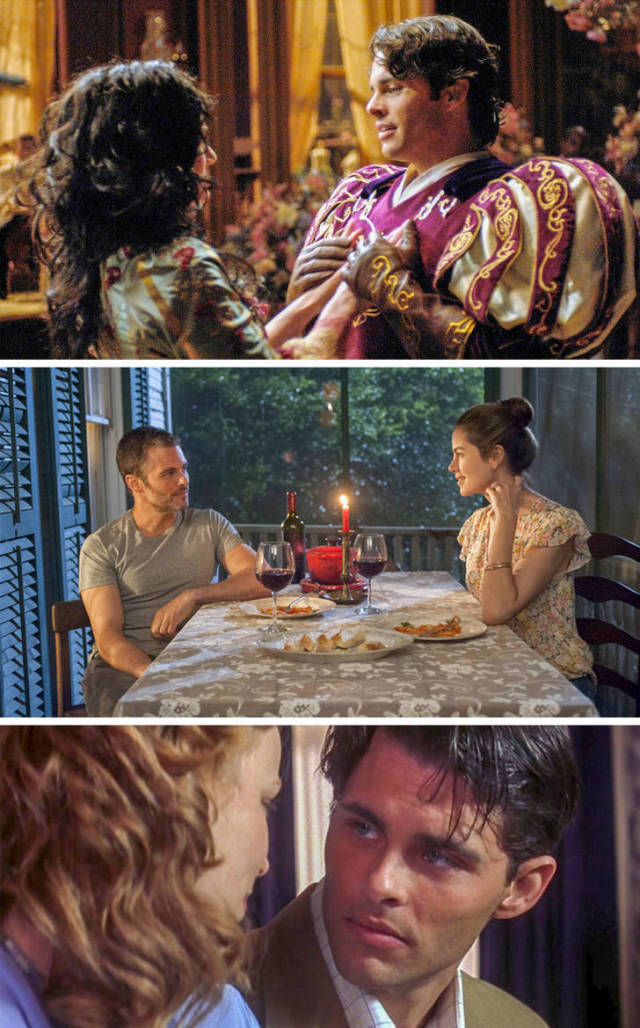 James Marsden plays this sweet, handsome, and supportive guy, who can be a perfect boyfriend or a husband but always loses his girls like in the X Men series, Enchanted (2007), Super Man Returns (2006), and even in The Notebook (2004). He explains why he chooses the roles, “I think movies like Enchanted and Hairspray are probably less torturous than doing something that makes you rip your heart open.” 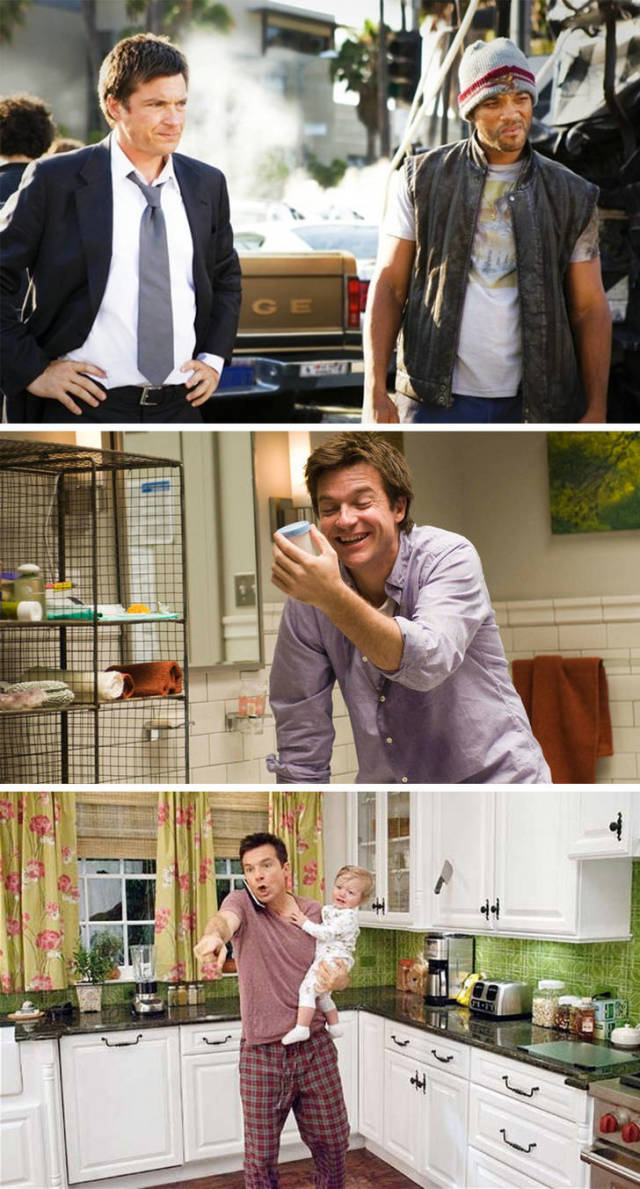 Jason Bateman always plays this grown, responsible man who tries to do the right thing, talks softly, and never curses. He’s selfless, humble, and goes through lots of difficulties to prove that he’s all of that. Whether it’s Hancock (2008), The Switch (2010), or The Change-Up (2011) you’ll find him almost the same in every movie, you don’t even need to remember the name of his character. Milla Jovovich is known to play this hot girl who can kick some serious butt. She can fight, draw some punches, do karate, and use any weapon. She’s basically the female version of Vin Diesel. Her movies like the Resident Evil series, Ultraviolet (2006), The Perfect Getaway (2009), and The Messenger (1999) are the perfect examples.