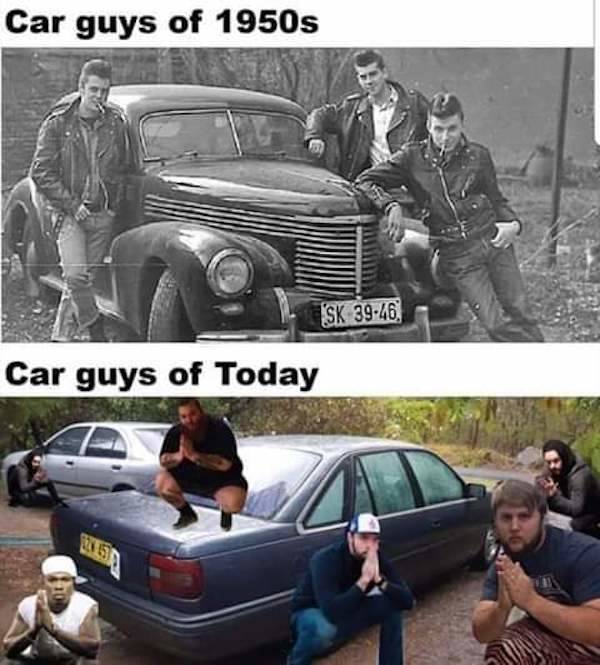 My car has somehow ended up in a meme after i posted the original photo on reddit, gives me a laugh whenever I see it. 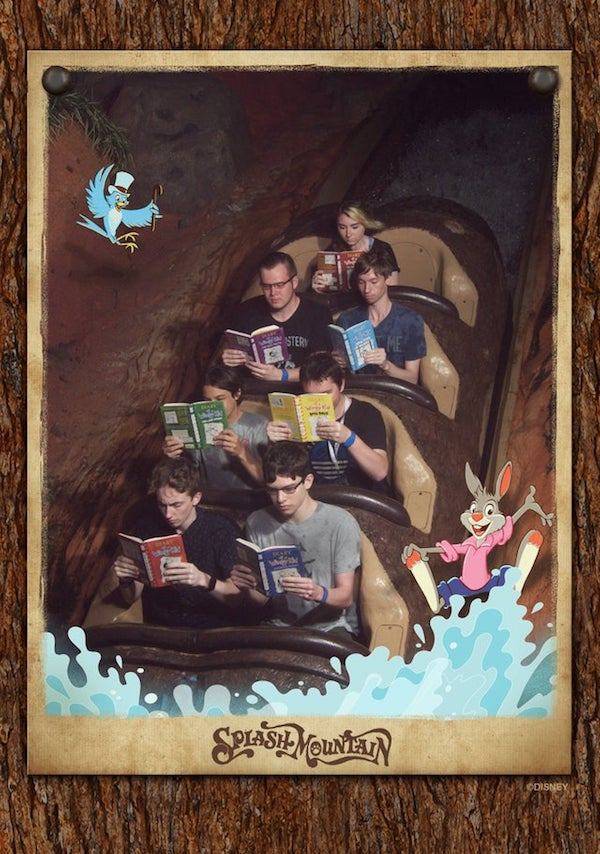 If anyone has seen the meme where seven people are calmly reading ‘Diary of a Wimpy Kid’ books on Splash Mountain, I was the one reading Cabin Fever.

The pic was taken towards the end of my senior year of high school a couple months ago. Since then, I’ve been approached by fellow classmates who I haven’t talked to in a long time exclaiming how cool that pic was.

It’s also kind of weird seeing Reddit and Instagram comments talking about me despite never posting images of myself or either platform. It’s still humbling to know that image floated around for some time though. My sister is in girl with the Michelin man “9 months later” fat baby meme. She thinks it’s funny. 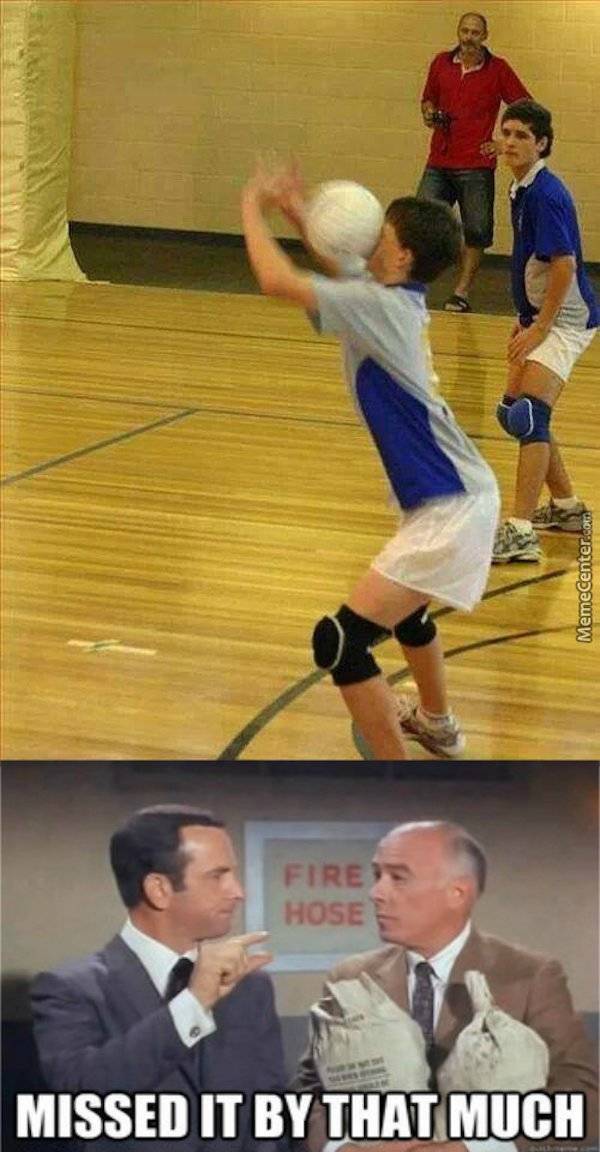 Someone took a picture of me “playing” volleyball and it pops up on here sometimes. I think it was during warmup when I was maybe 12 y.o. before a football practice. What kinda bugs me is that I do not know who took the pic or uploaded it.

The only way it really affected my life is that every time I get introduced to new people through my friends they go “oh you are that volleyball guy right?”. 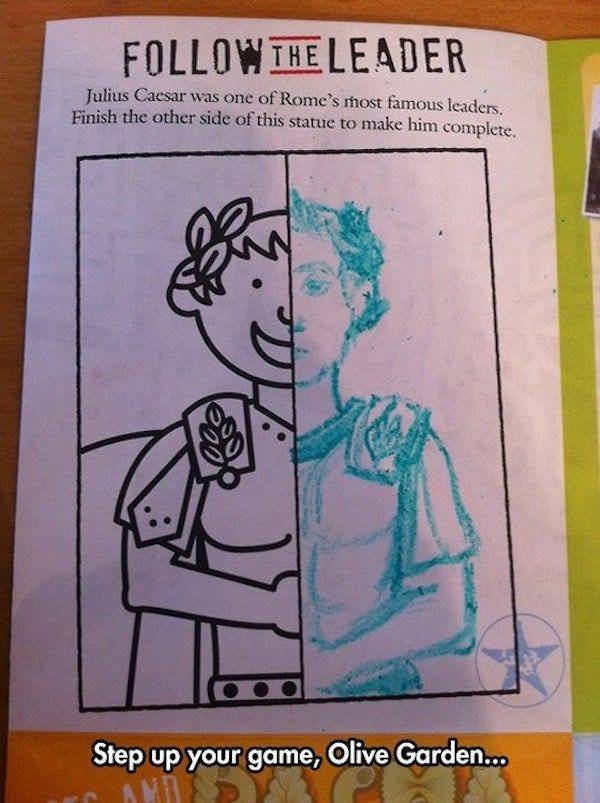 Not me, but couple of years back, my high school history teacher told our class that at some point during the early 2010s, he visited Olive Garden for some event. He was bored waiting, so to pass time he doodled on a “complete the picture” activity involving Julius Caesar.

After everything was over, he didn’t bother to throw it away. Someone else photographed the picture and posted it on Reddit, thus starting the “Overqualified” meme. He told us that when he found out, he was simultaneously flattered and disturbed at the same time, and was somewhat disappointed about the people finding random problems with it (since it wasn’t even intended to be posted online).

Not me, but I went to school with they “They had us in the first half” meme that crops up a few times a month.

From what I could tell he took it relatively well and used his position of publicity to try and be a light in other people’s lives. 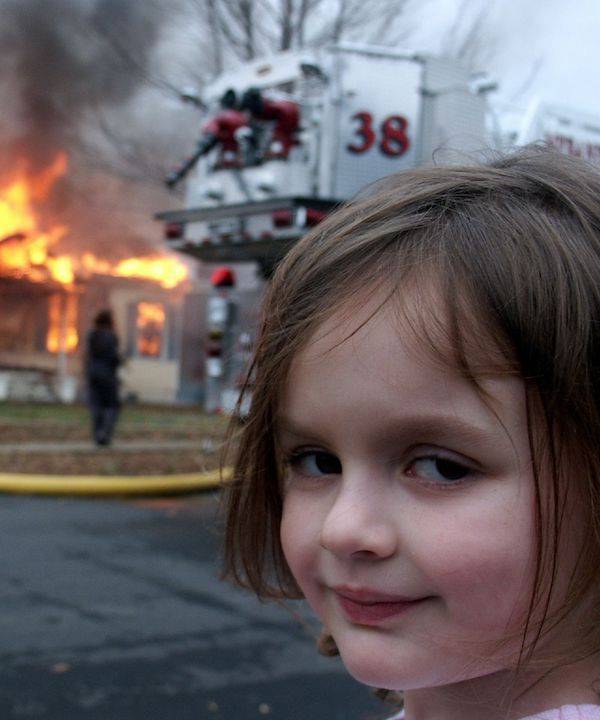 That meme of the little girl standing in front of the burning house goes to college with a close friend of mine now. apparently shes a b#[email protected] I was childhood friends with the, uh, epiphany guy? White guy with brown hair in the middle of a rave or dance that looks like he just realized something. I literally saw that meme hundreds of times over years and then one day I was showing a version of it to a friend of mine and he was like oh hey it’s Will.

Mind. Blown. He’s even wearing a shirt of a local skateboard company.

I have zero clue how it affected him as we aren’t in touch anymore. So far as I know he’s a DJ now. 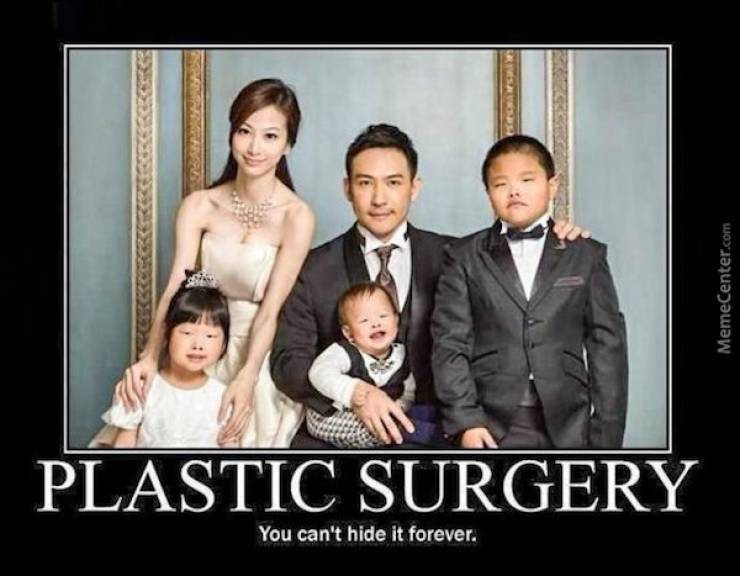 This thread reminded me of this meme.

The image actually comes from an ad that implies both parents had plastic surgery-resulting in attractive parents and and awkward conversation down the road with their less than attractive offspring. The meme implies just she had plastic surgery and her husband didn’t find out until their kids were born looking significantly different than what one might expect. Idiots now think that she actually did have plastic surgery, and this has reduced her professional ability to model and also impacted her dating life. There’s even rumors that “her husband sued her because the kids looked nothing like her” despite that the real-life model is unmarried and has no children. 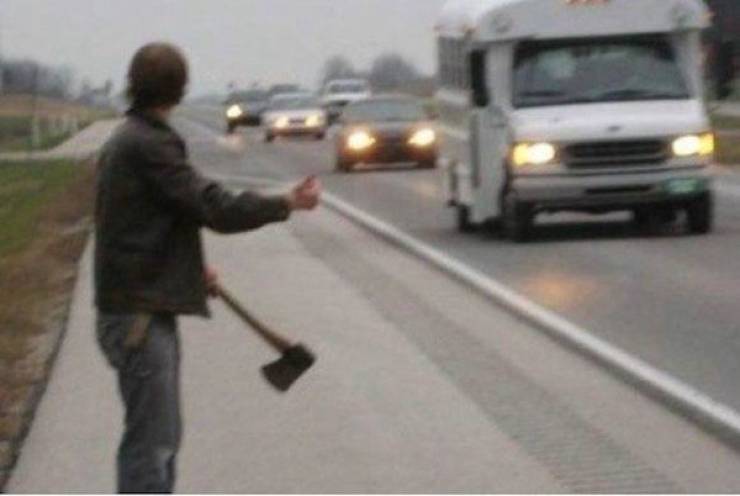 My friend became the “hitchhiker with an axe” meme that’ll occasionally pop up around the internet. The photo was taken on the highway near my house. When the picture ended up on the Colbert Report it only inflamed his ego. 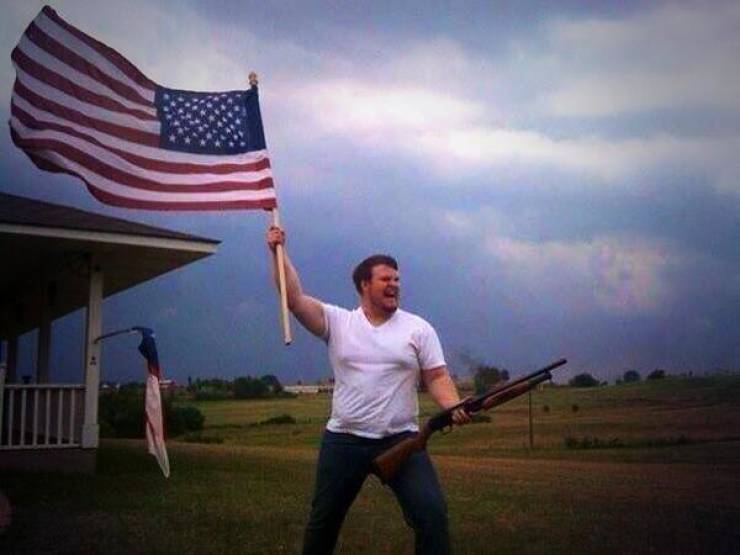 Guy from my hometown is MURICA guy. (One hand holding a rifle and the other holding a giant American flag) His brother played in a band with my dad. They’re pretty cool guys. 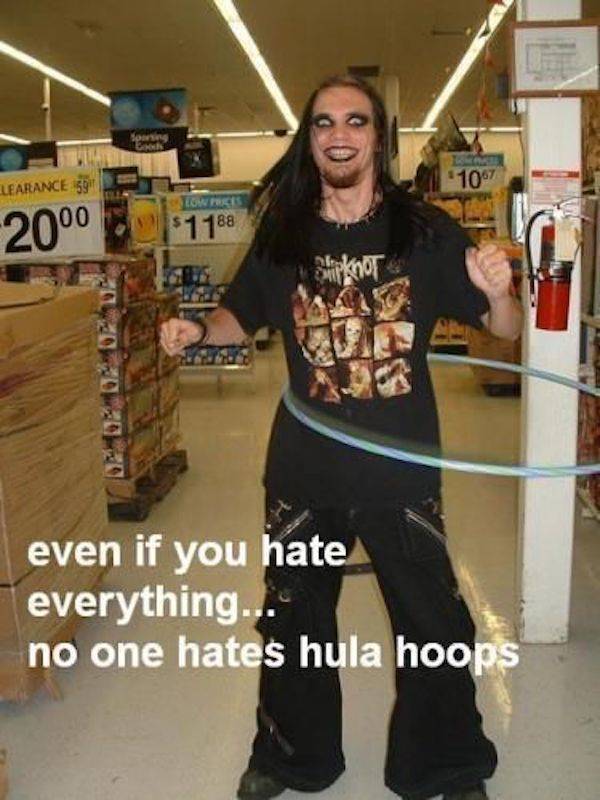 It was certainly my claim to internet fame. I love that picture. I actually posted it a few months ago on r/blunderyears and had a wonderful experience hearing from people the picture inspired and felt good just seeing. That in itself is pretty awesome to know that you were able to inadvertently make someone happy or laugh.

I definitely had a lot of fun at a local college town as the “hula hoop guy” and even knew of some hooping clubs (especially back when hoop dancers were huge) that used the picture as inspiration and whatnot.

Oh, I also had some random guy try and take credit for being the person in the picture. That was a dumb conversation. 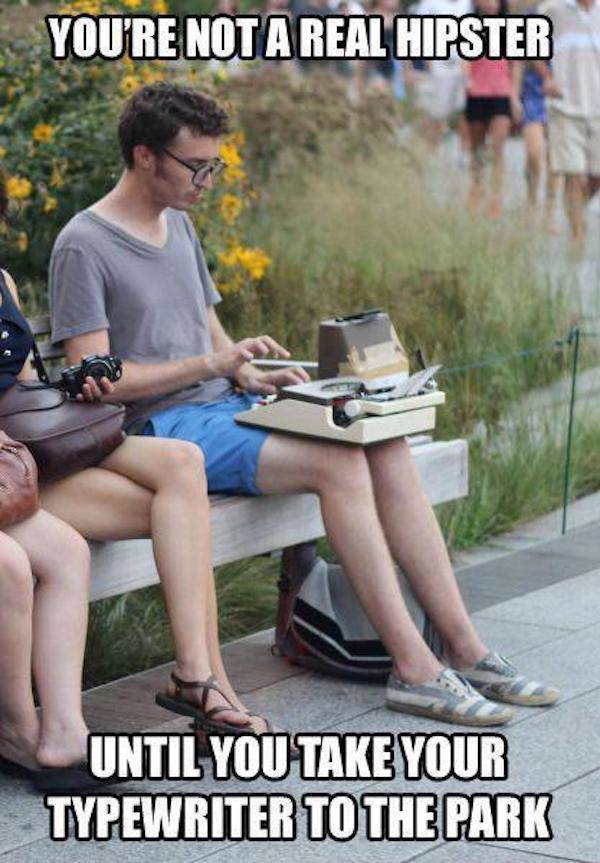 Not me i heard a story of a guy who was bringing a typewriter to a public park and wrote stories for people for like 2- 3$. People were taking pictures of him and one girl took a pic from an angle where the sign that said he wrote stories was covered up. Someone made a hipster meme about it and people were starting to threaten him in the park for it.

It’s weird really, and he got cyberbullied a lot. 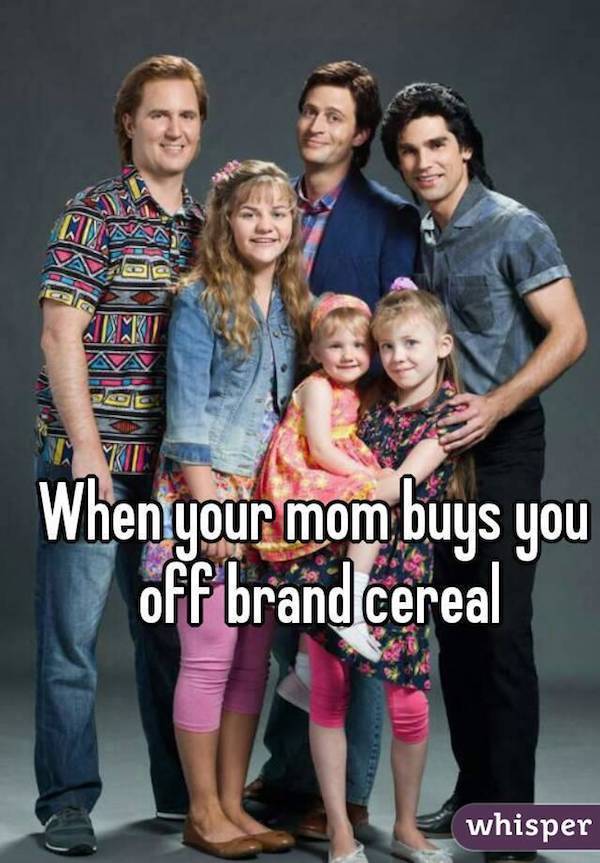 Not me but my friend is an actress and she played a role in a spin off movie of full house. She played DJ and someone made a meme of the cast that says “when you buy off brand cereal”. Gave me some good laughs 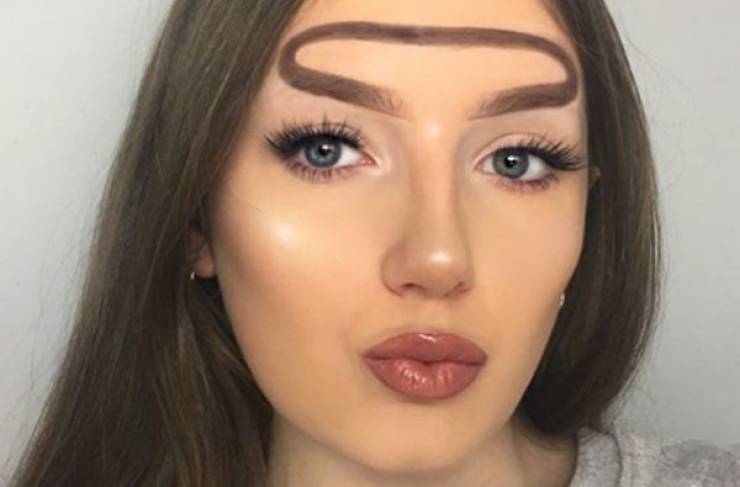 the halo-brow makeup trend/meme? all me. just get a lot of messages from old classmates showing me different news articles, still 2 years later. a LOT of people had a lot to say about it, definitely didn’t get a great reception haha but I’ve never cared as it was just me having fun with makeup, no more no less. 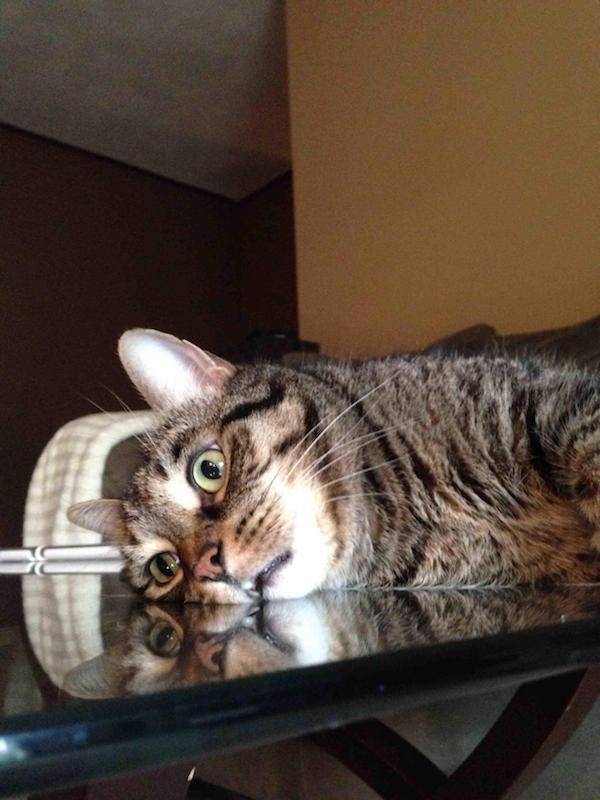 I posted a picture of my cat who was cooling off on a glass table on a hot summer day, and someone turned him into a meme called Existential Crisis Cat. Online, I was surprised to get some negative comments, such as one person saying I wasn’t taking care of my cat as he looked depressed. Offline, I got a lot of text messages for a couple months from people I know, saying “hey I saw your cat on such-and-such website!”

In the end, his 2 minutes of fame faded out, and its a fun story to tell, about the time our cat was a meme. 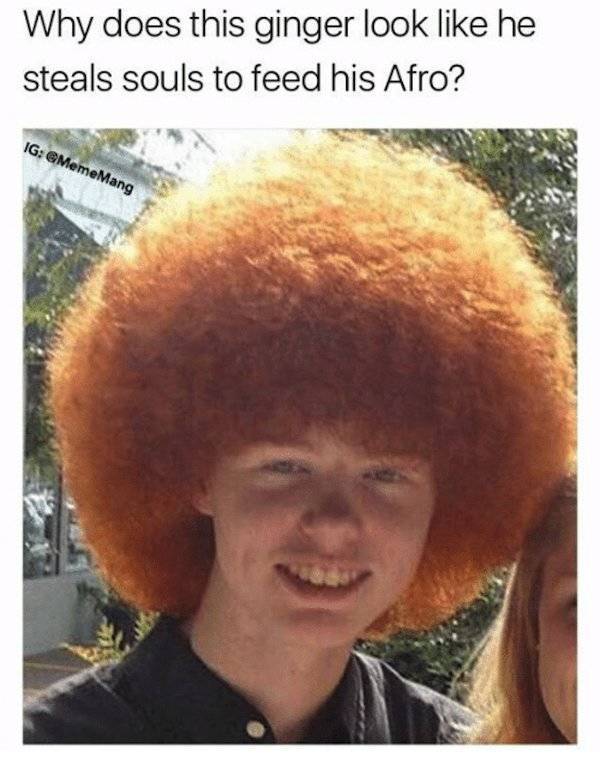 He said this going viral caused him humiliation, depression, etc. I didn’t know if this meme until after I met him and honestly, this dude is so badass. He’s a magnificent Cleveland musician and has worked with Grammy artists and is the top teacher with the Cleveland Classical Guitar Society. 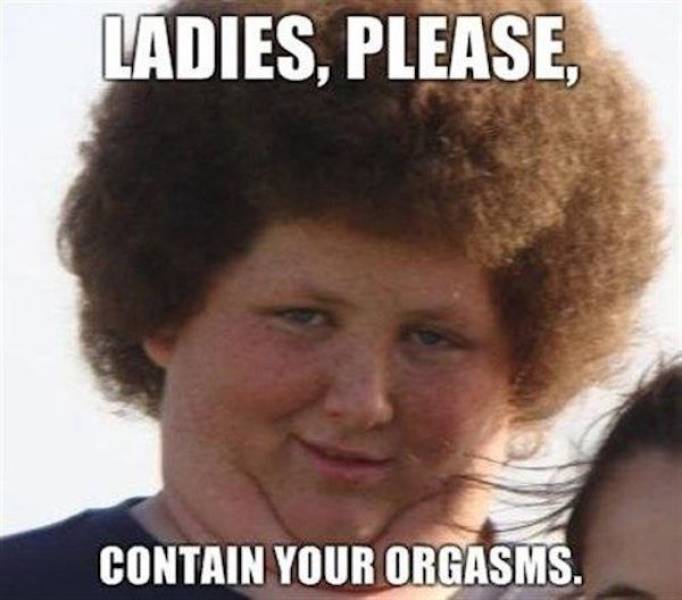 My picture was used as the original meme, but I am one of the faces of the “ladies contain your orgasms” meme. My friends usually pull it up to try to hype me up to other people, so I guess it can be considered a win.