Movie Magic Can Be Created Without CGI (29 pics) 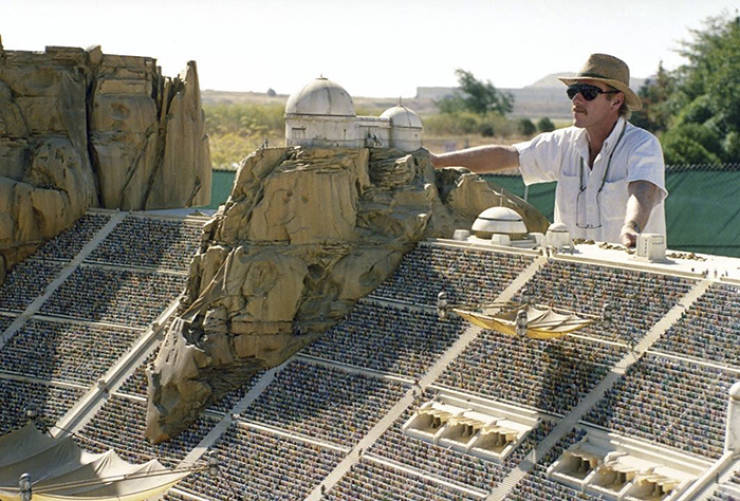 Model maker Michael Lynch cut 450,000 Q-tips, painted them and inserted them into a mesh to fill the stands. To make it seem like the crowd was moving, the crew placed fans underneath. 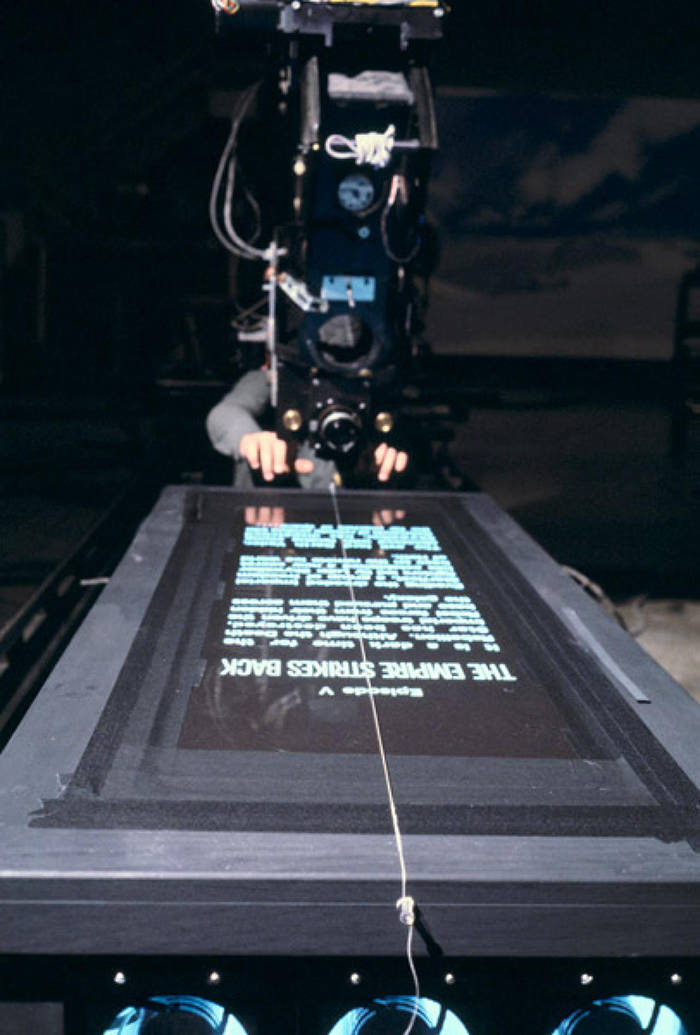 The actual shooting of the iconic opening credits of the movie. 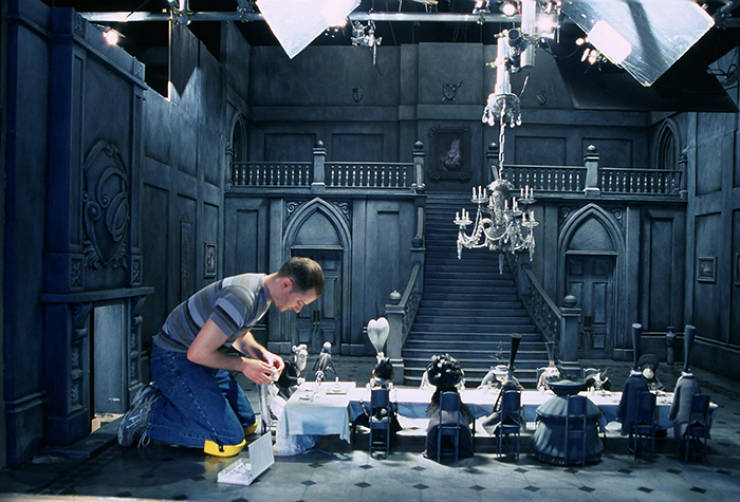 To make it seem like the pen was floating, Stanley Kubrick instructed the crew to glue it to a large sheet of glass, which was then rotated around to give the impression of free-floating. 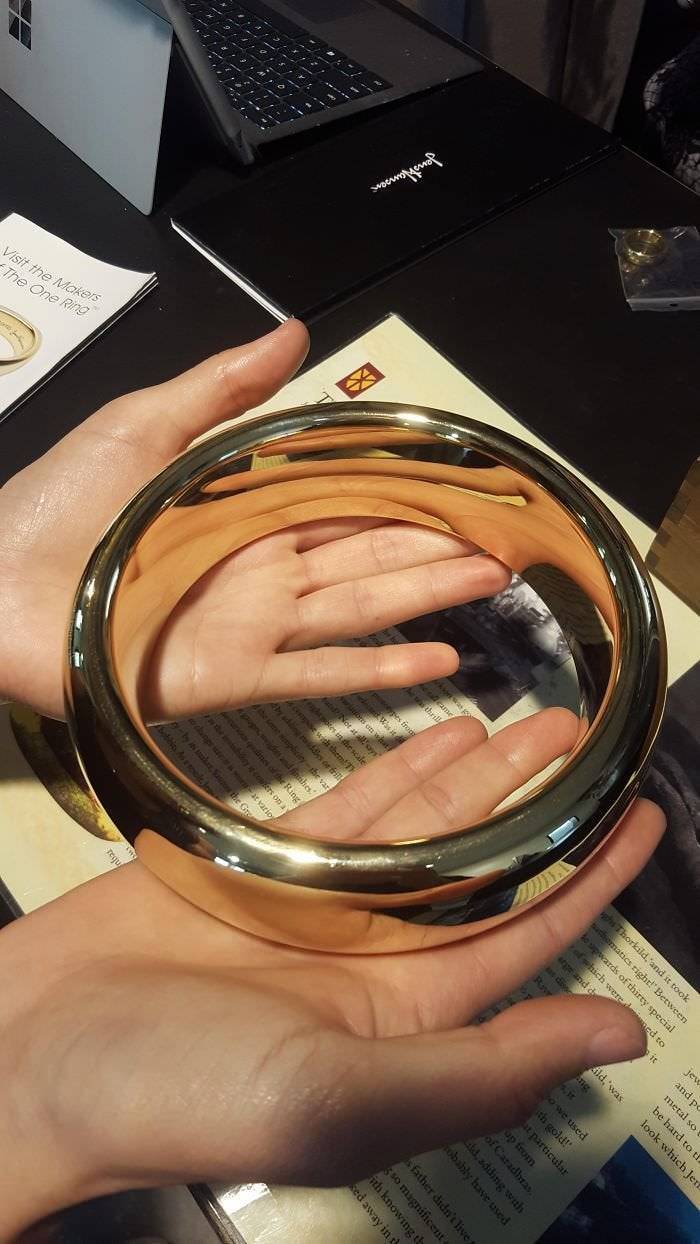 A prop used for close ups of the ring. 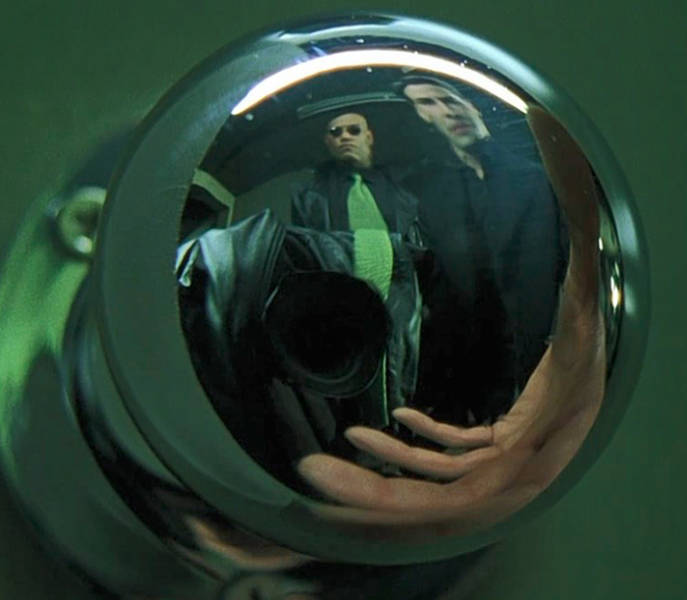 In the scene where Neo is reaching for a doorknob, there was no proper way to hide the camera so the director of photography disguised it with a coat and tie matching the ones Morpheus is wearing. 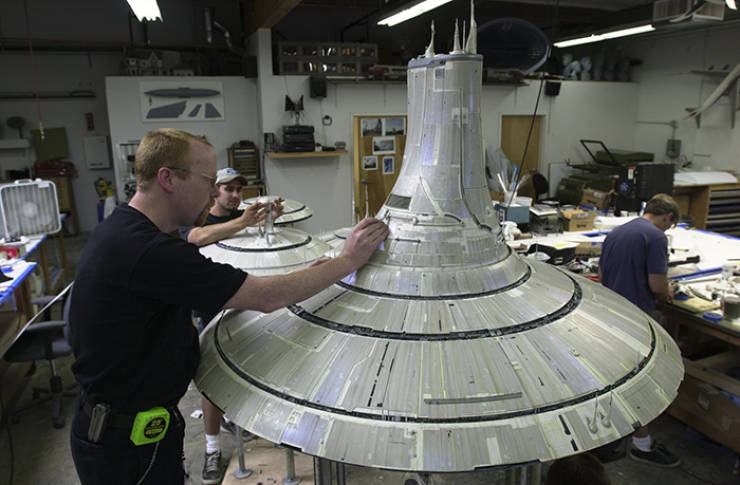 Adam Savage (yes, the same famous Mythbuster) worked as a model maker on both Star Wars episode I and II. 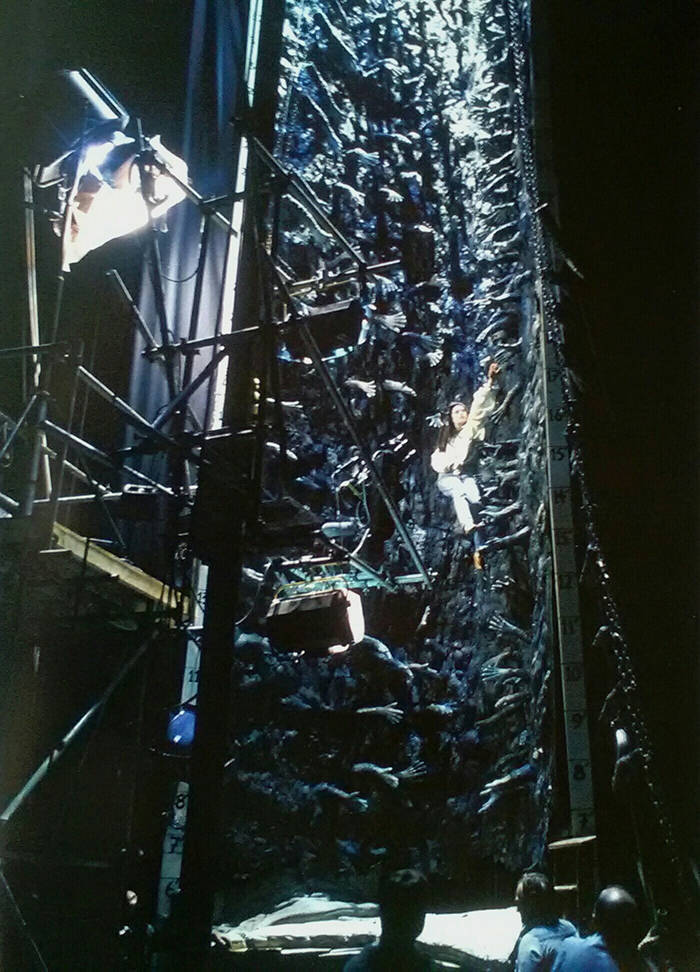 In order to film the "Helping Hands" scene, the creators made over 100 pairs of latex hands. 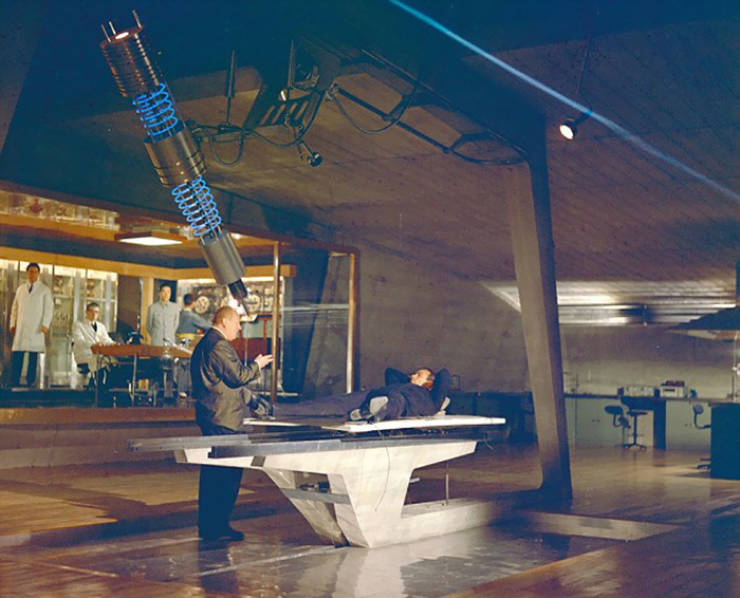 The illusion that the laser was cutting through the table in the famous Goldfinger scene, was actually... not an illusion. The nervous look on Sean Connery's face, we assume, must've also been real. To film it, a special effects man was under the table with an acetylene torch cutting through it from beneath. 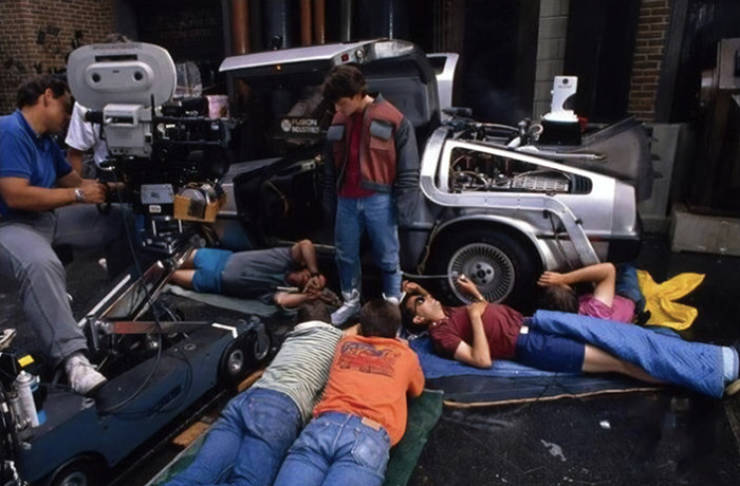 The effects crew working on creating the auto-adjusting and auto-drying jacket effect. 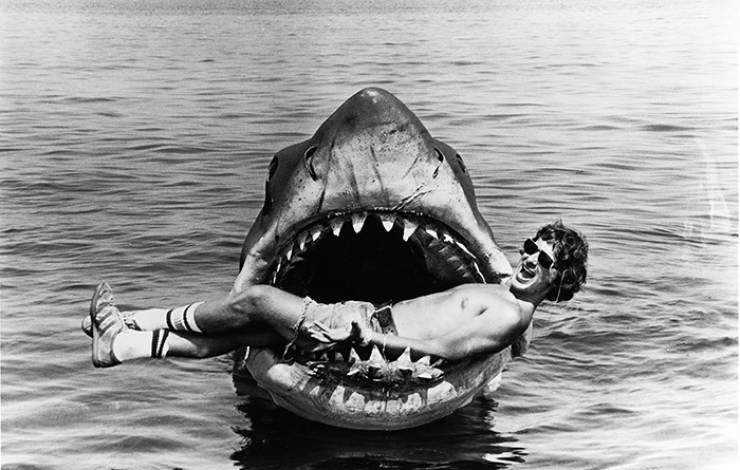 Steven Spielberg in the jaws of Bruce, the animatronic shark designed for the movie. 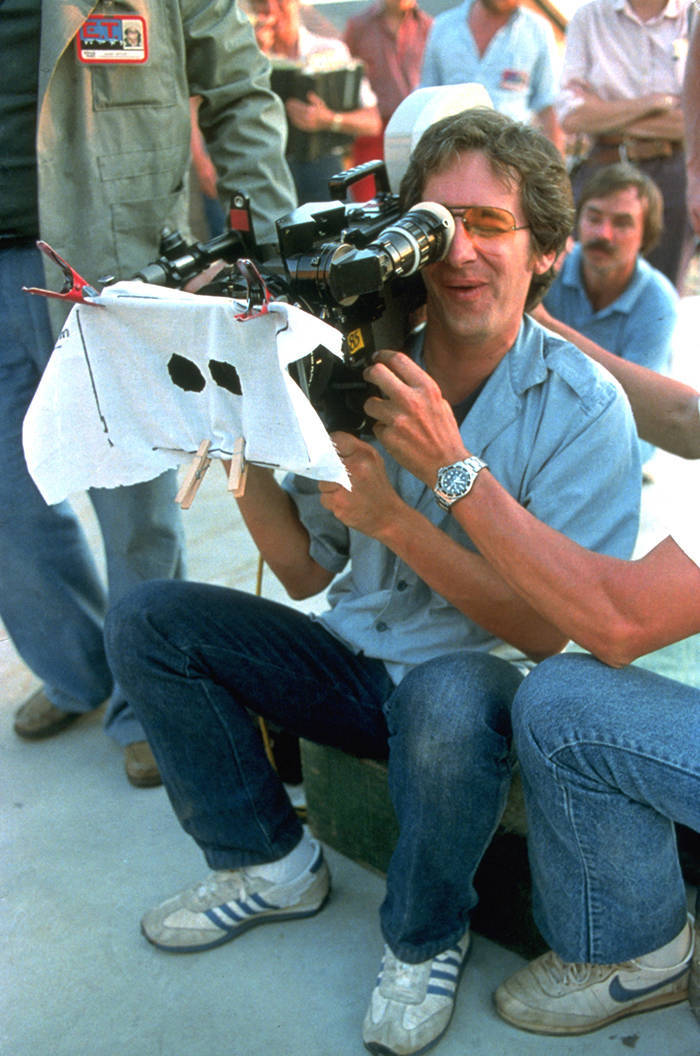 Steven Spielberg with a camera that's covered in a white cloth with two holes in it. It was used to get the point of view shots for E.T. 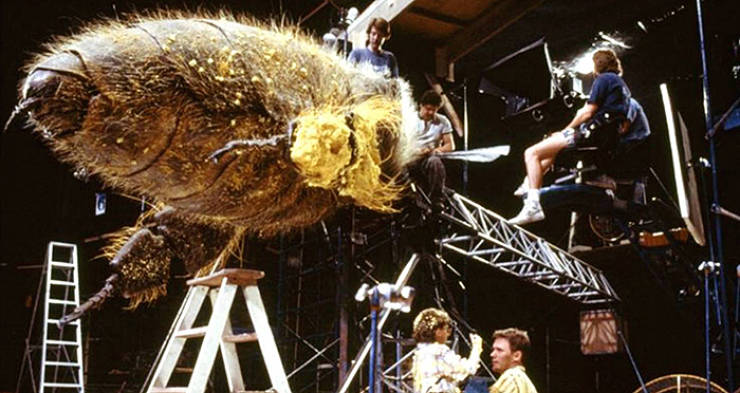 A giant robotic bee that was used to film the bee ride scene. In the post-production of the movie, some digital effects were also added. 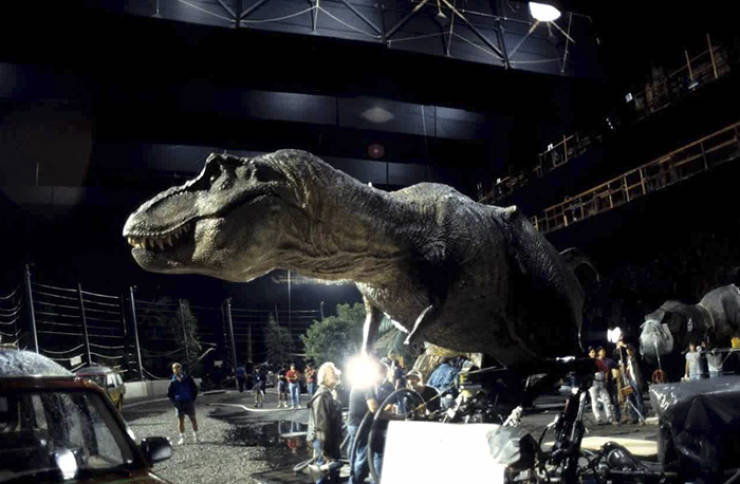 The life size T-Rex animatronic on the set. 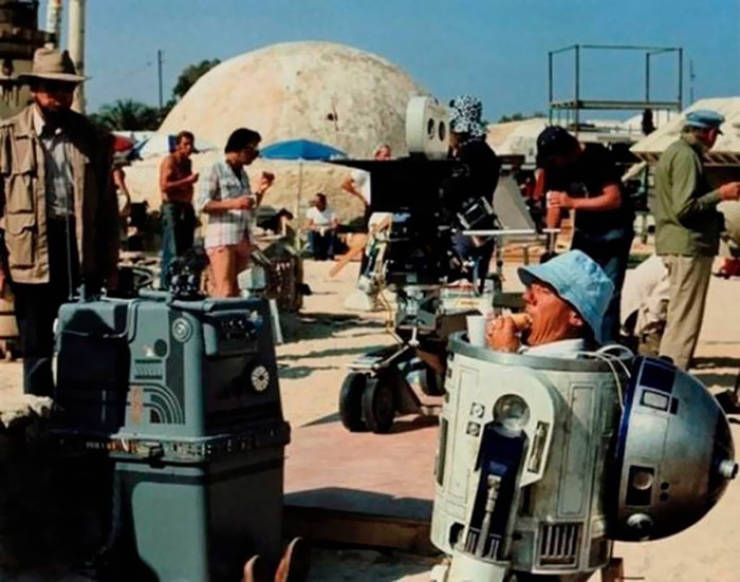 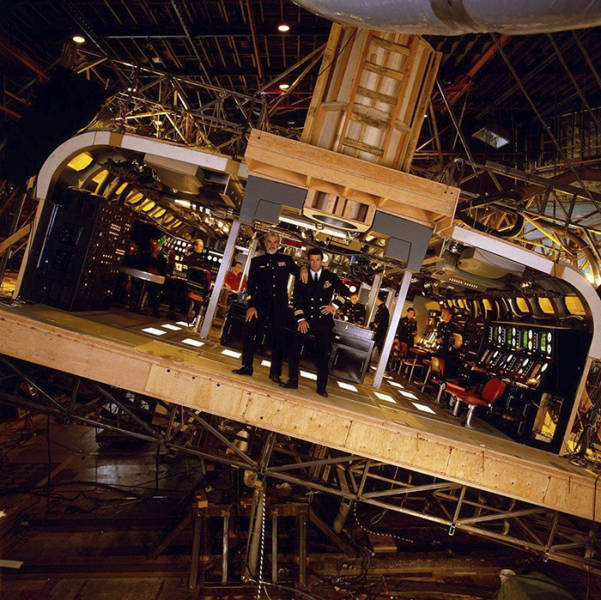 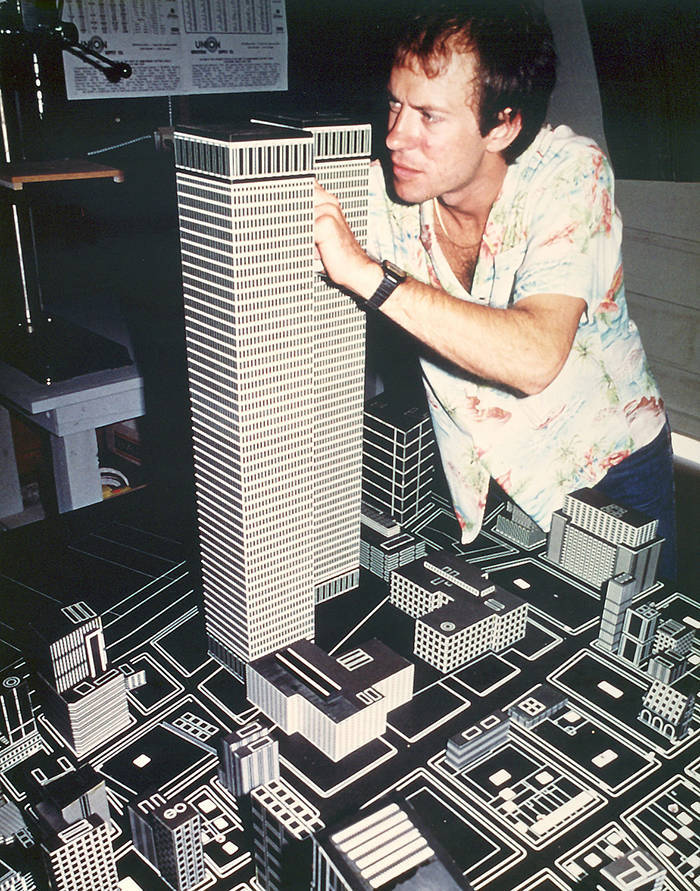 The '80s action flick features a scene in which police officers are looking at a digital map of the city. At the time, technology was not advanced enough to create the actual digital graphics so a real-life model was built instead. 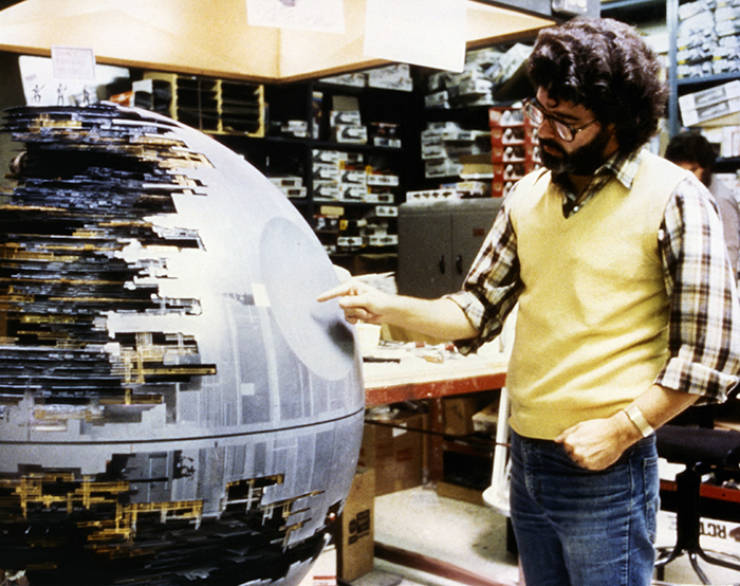 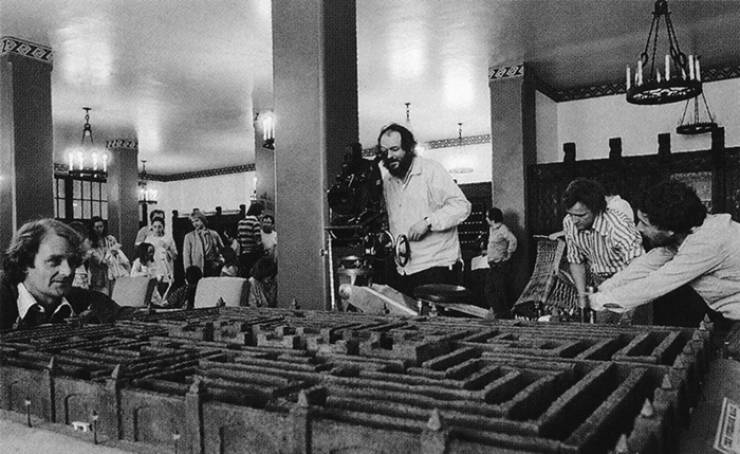 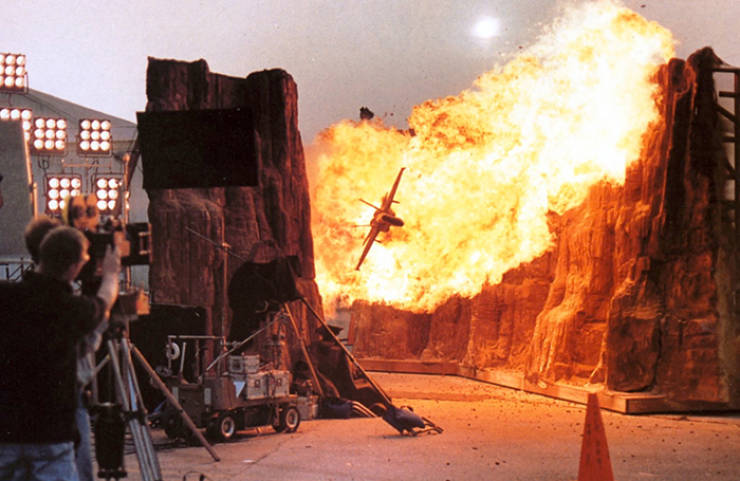 The highest grossing movie of 1996 used a mixture of models and CGI for the effects shots. Around 80% of effects were models (like the large-scale model below) while the other 20% were created digitally. 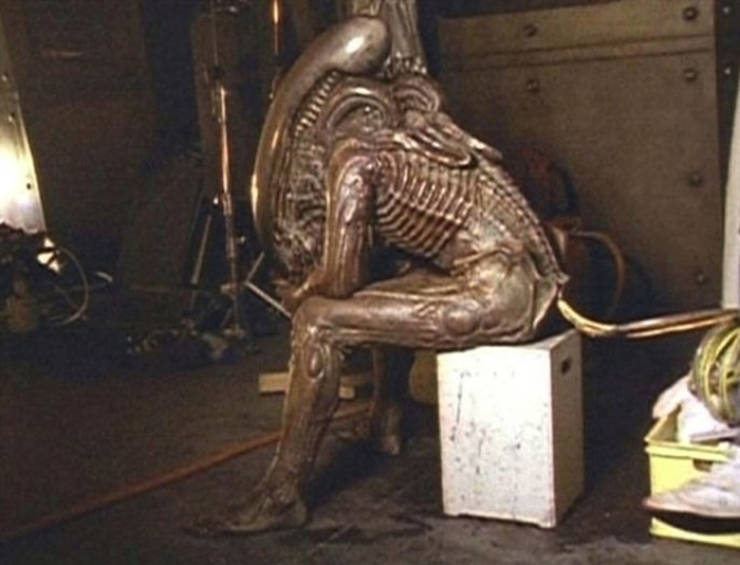 Bolaji Badejo, a Nigerian student who wore the Alien suit in his only film role, sitting down for a rest during a break. Filming was extremely physically taxing for him as the costume was made from latex that made breathing very hard. 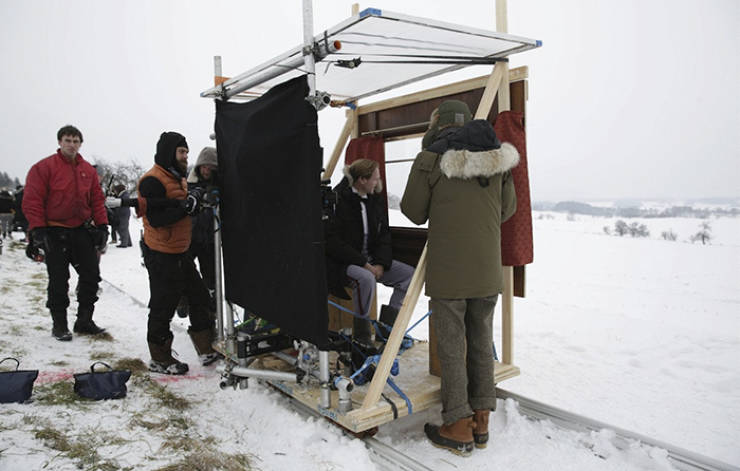 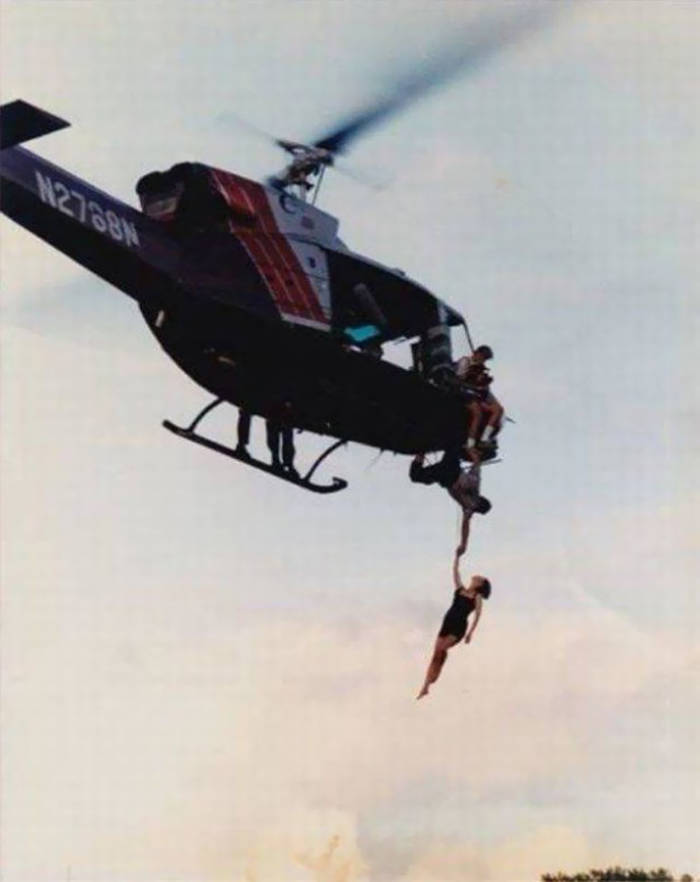 A shot from filming the helicopter scenes for the 1994 action movie with Arnold Schwarzenegger and Jamie Lee Curtis. For the movie, the US Government supplied three Marine Harriers and their pilots for a fee of $100,736. 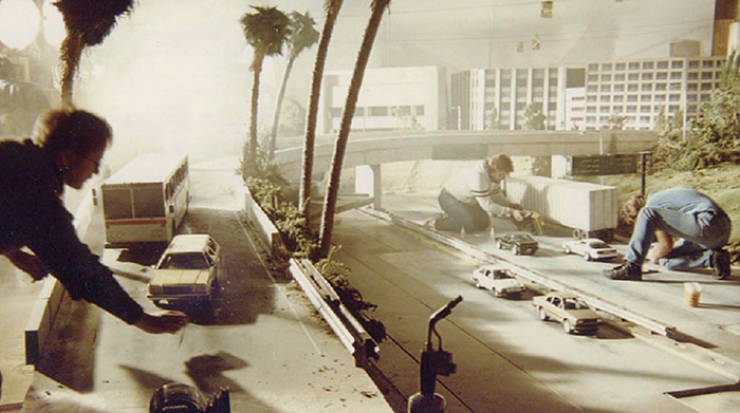 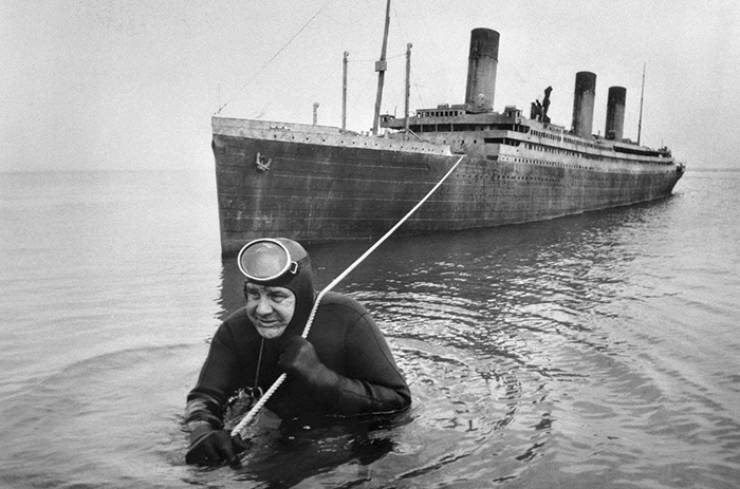 55-foot scale model of the Titanic being positioned by a diver. 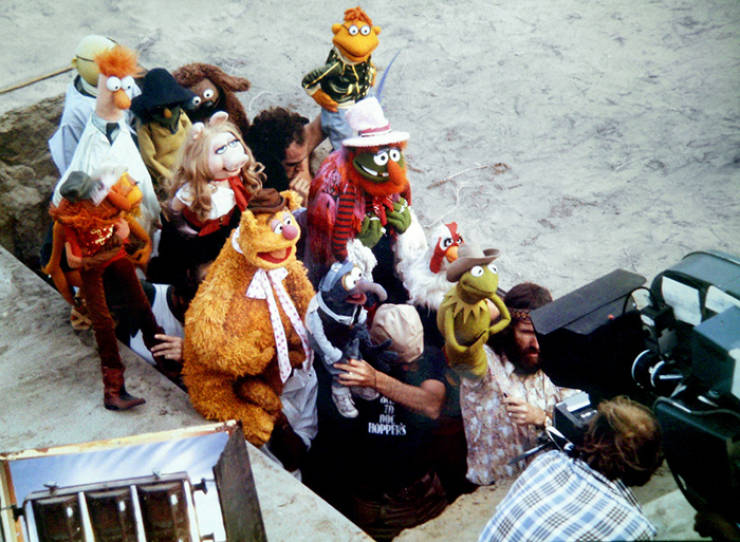 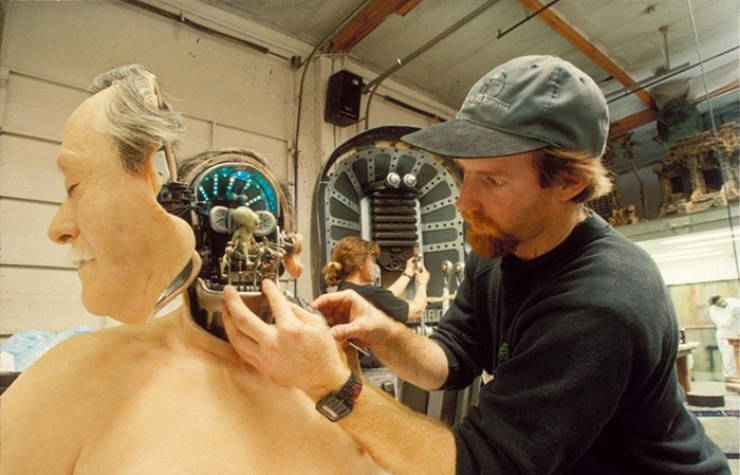 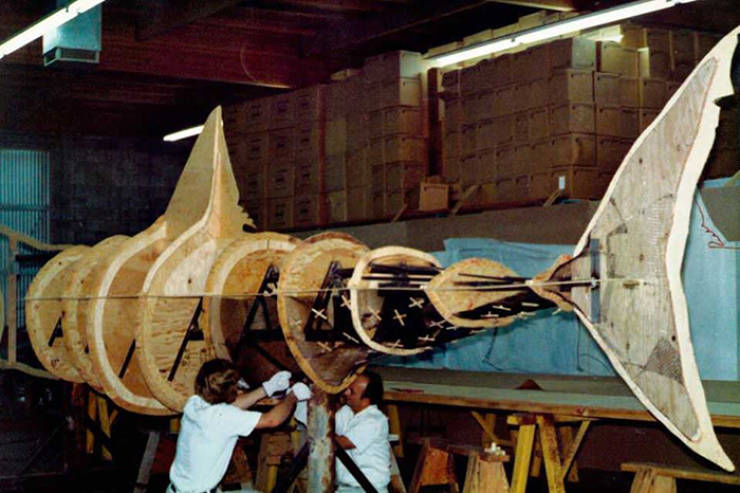 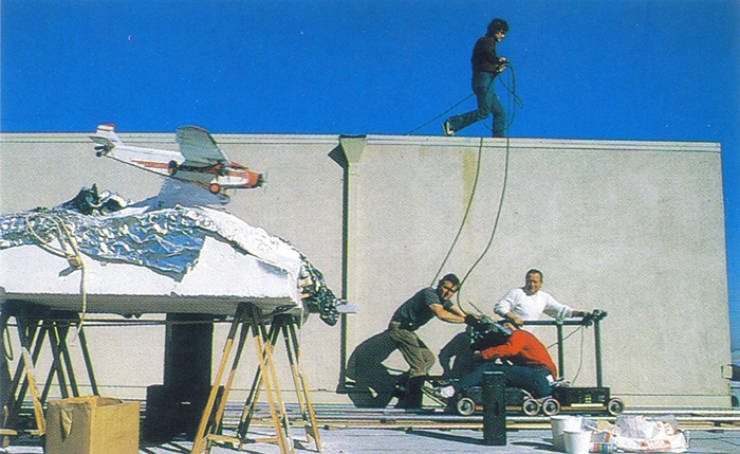