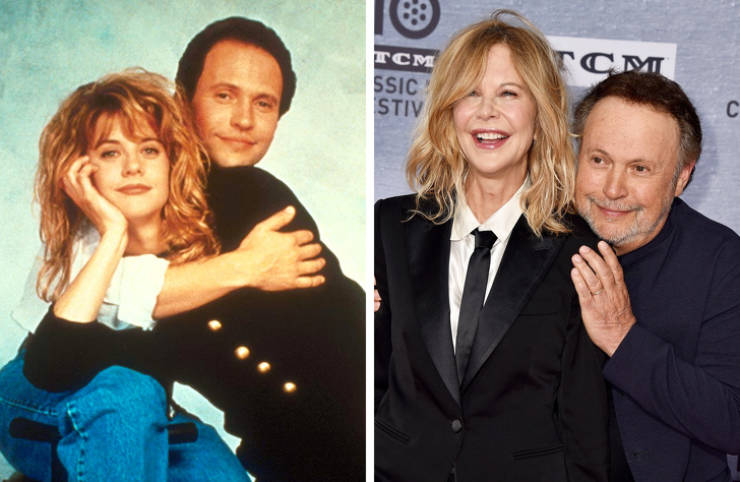 The premiere of When Harry Met Sally took place 30 years ago. So 71-year-old Billy Crystal and 57-year-old Meg Ryan appeared together on the red carpet for the first time in a while. On April 11, they attended the gala evening devoted to the anniversary of their film and the Turner Classic Movies festival opening. 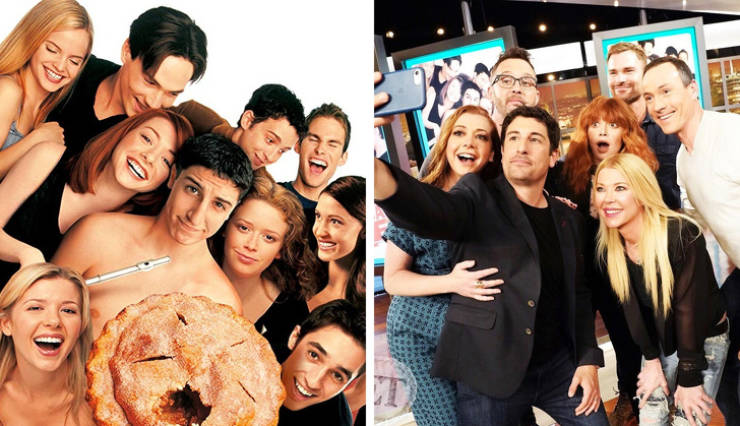 This year, American Pie turned 20 years old. In honor of this event, Entertainment Tonight has organized a reunion where all the actors got together. A selfie that Alyson Hannigan posted on her Twitter account that was taken at the event went viral on the internet. 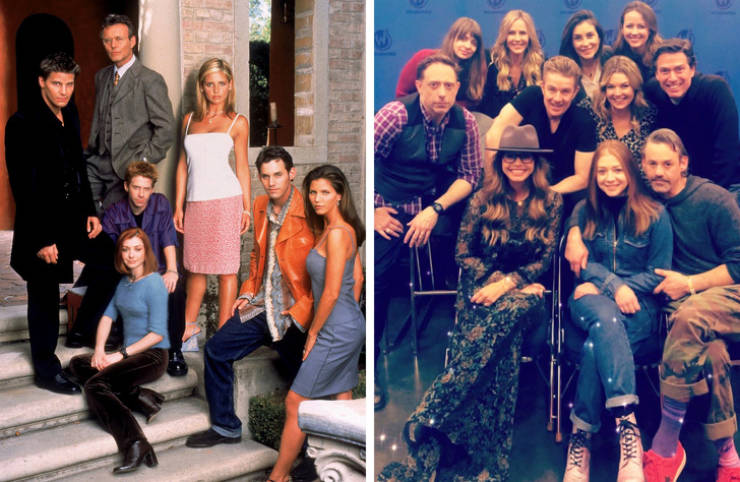 In 2003, the last episode of Buffy the Vampire Slayer was released. 16 years later, the 11 actors appeared together on stage at a conference center in Oregon during Wizard World Portland. Only Sarah Michelle Gellar (Buffy) and David Boreanaz (Angel) were missing. The story about friends from Wisteria Lane was said to be one of the most successful TV series in the world. After the show finished, it was not just the “housewives,” but also their “children” who’ve since made cameo appearances together. In 2017, Madison De La Garza (Juanita Solis) invited Daniella Baltodano (Celia Solis) to her house where they shared their memories from the past and recorded a video for Madison’s YouTube channel. 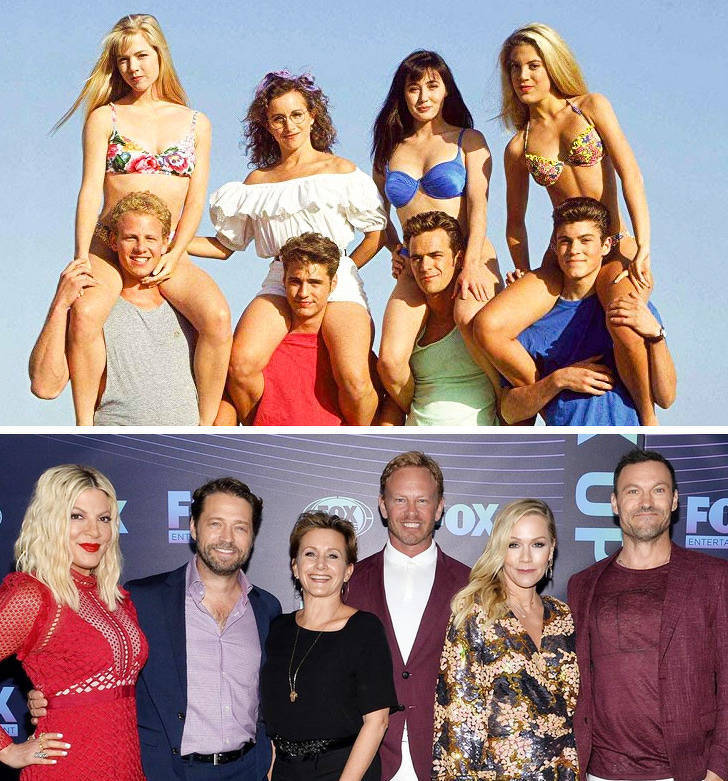 Beverly Hills, 90210 ran from 1990 until 2000. 18 years later, the Fox channel decided to reboot the project. The actors have come together on stage once again and continue to entice their fans with photos and videos of the process. 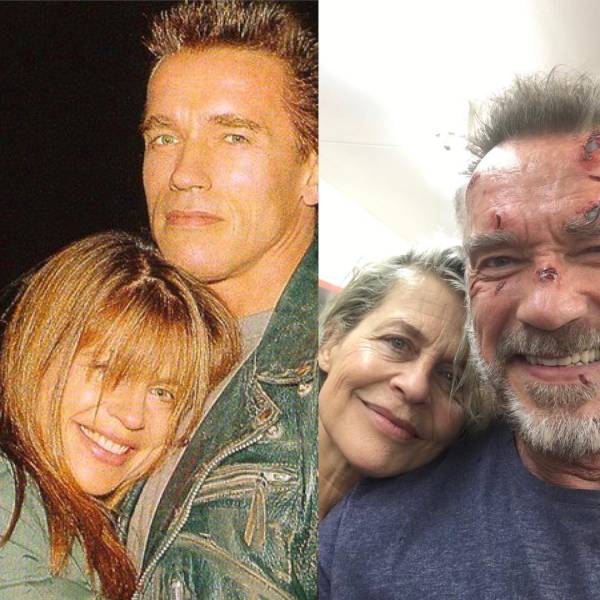 In September 2018, on his Instagram, Arnold Schwarzenegger congratulated “Sarah Connor” (Linda Hamilton) on her birthday. He called her a wonderful human being and said that he was really pleased to work together with her again. Recently, a new trailer for The Terminator was released, and we’ll be able to enjoy the new version of the film in October 2019. 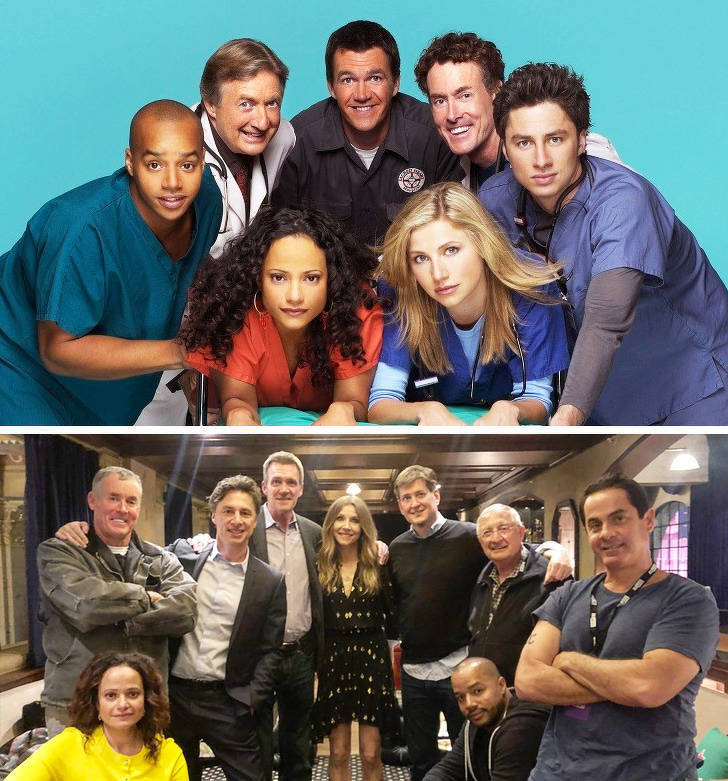 This comedy series about young doctors finished up in 2010. Then the film directors said there’d be no more episodes. In 2018, Zach Braff posted a touching photo of the actors who all got together at the Vulture festival and added the comment “Season 10.” In March 2019, the actors from Clueless got together at the Chicago Comic & Entertainment Expo for the first time in 24 years. But unfortunately, not all the cast members managed to attend the event. 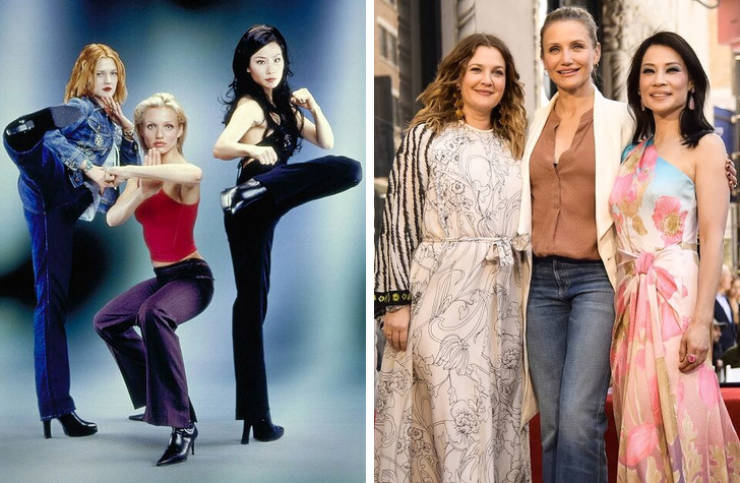 A few months ago, Lucy Liu got a star on the Hollywood Walk of Fame. Drew Barrymore and Cameron Diaz, who were her colleagues on the set of Charlie’s Angels, came out to congratulate and support her. Lucy wrote on her Instagram, “20 years ago we were forming an elite crime fighting team.” 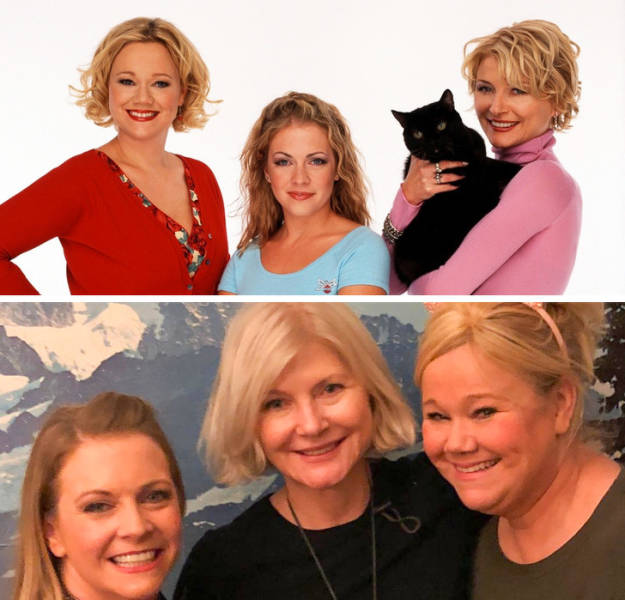 On February 25, Melissa Joan Hart posted a picture with Beth Broderick and Caroline Rhea on her Instagram. She congratulated Beth on her birthday. 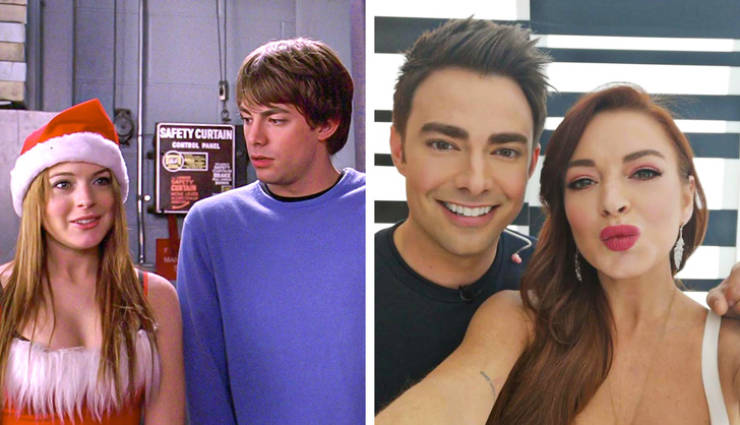 It’s been 15 years since the release of Mean Girls. In January, before launching Lindsay Lohan’s Beach Club, the actress went to Jonathan Bennett’s studio and did an interview with him. 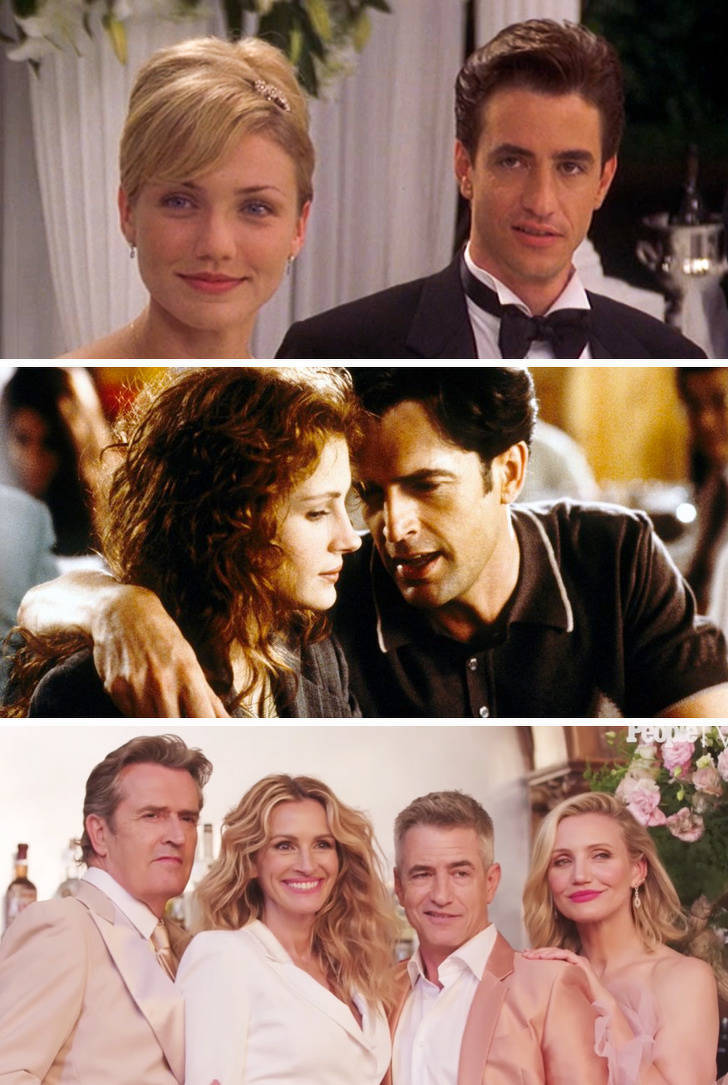 Film friends Julia Roberts, Dermot Mulroney, Cameron Diaz, and Rupert Everett got together 22 years after the premiere for My Best Friend’s Wedding. Entertainment Weekly gathered the actors together to take part in a photoshoot and an interview. 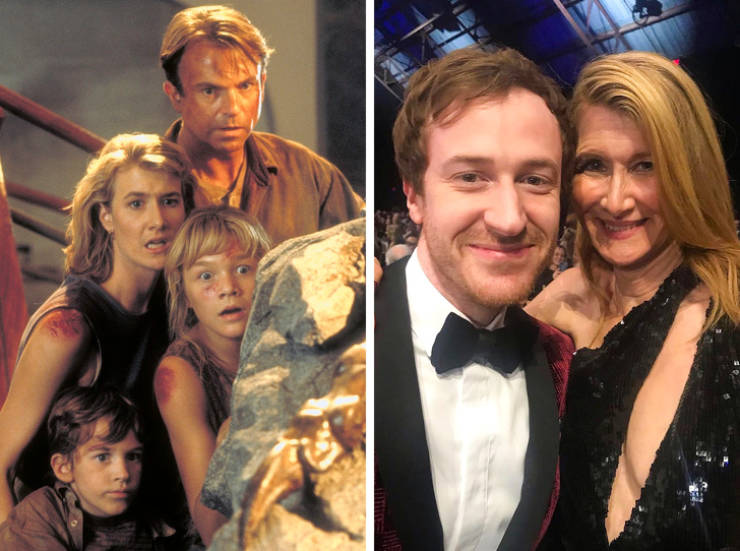 In the Jurassic Park of 1993, Laura Dern and Joseph Mazzello played doctor Ellie Sattler and Tim Murphy. Mazzello was 10 then and Dern was 26.

This year, the actors got together at the Critics’ Choice Awards ceremony in California. Laura was nominated for her role in The Tale and Joseph came to support the Bohemian Rhapsody cast. 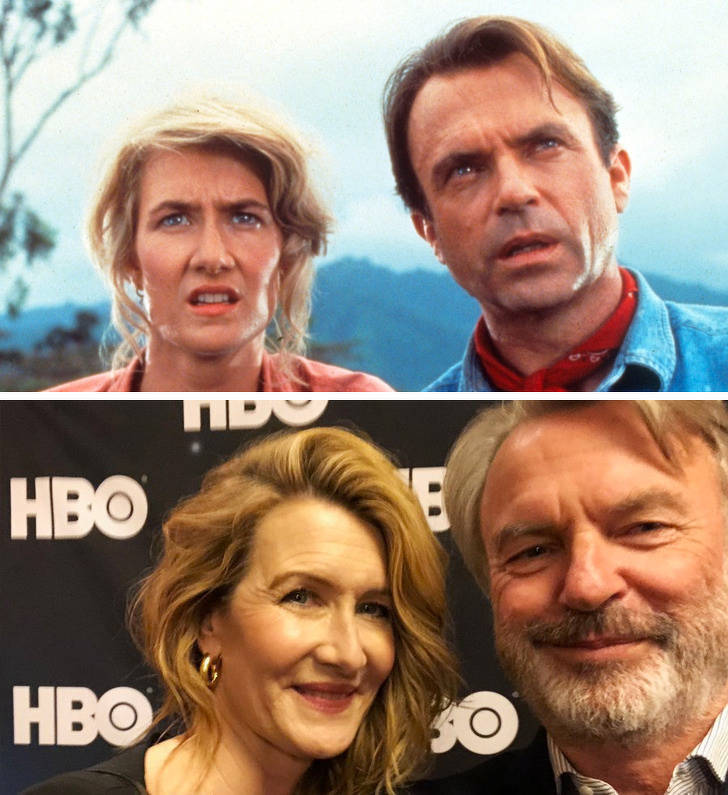 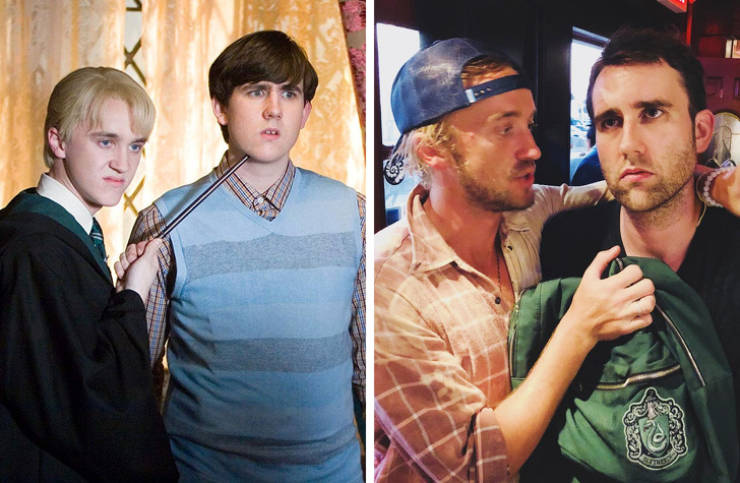 At Hogwarts, Neville Longbottom (Matthew Lewis) studied at Gryffindor and Draco Malfoy (Tom Felton) at Slytherin. Last year, when they got together, Tom tried to “persuade Matthew to enter Slytherin.” He decided he almost nailed it, though on his Instagram, Lewis answered that he was nowhere close to being convinced. On March 25, Mandy Moore got a star on the Hollywood Walk of Fame. Her colleagues from This Is Us together with Shane West, her “beloved” from A Walk to Remember, came to support her. West gave a touching speech and gave the actress a photo of them from the set of the melodrama. 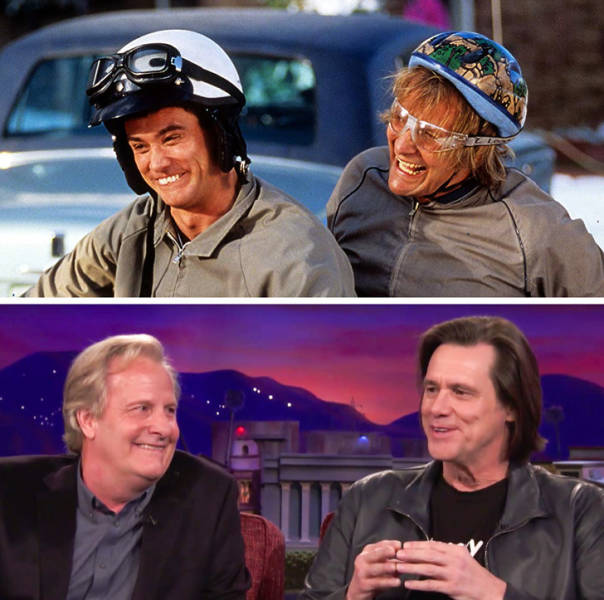 In 2018, Jeff Daniels visited Conan O’Brien’s late night show to tell us about The Looming Tower series where he plays the main character.

There was a surprise for Daniels: Jim Carrey was waiting for him inside. The actors started joking and remembering the events that happened on the set of Dumb & Dumber. By the way, it’s been 24 years since the premiere. The last part of the series was released 5 years ago. 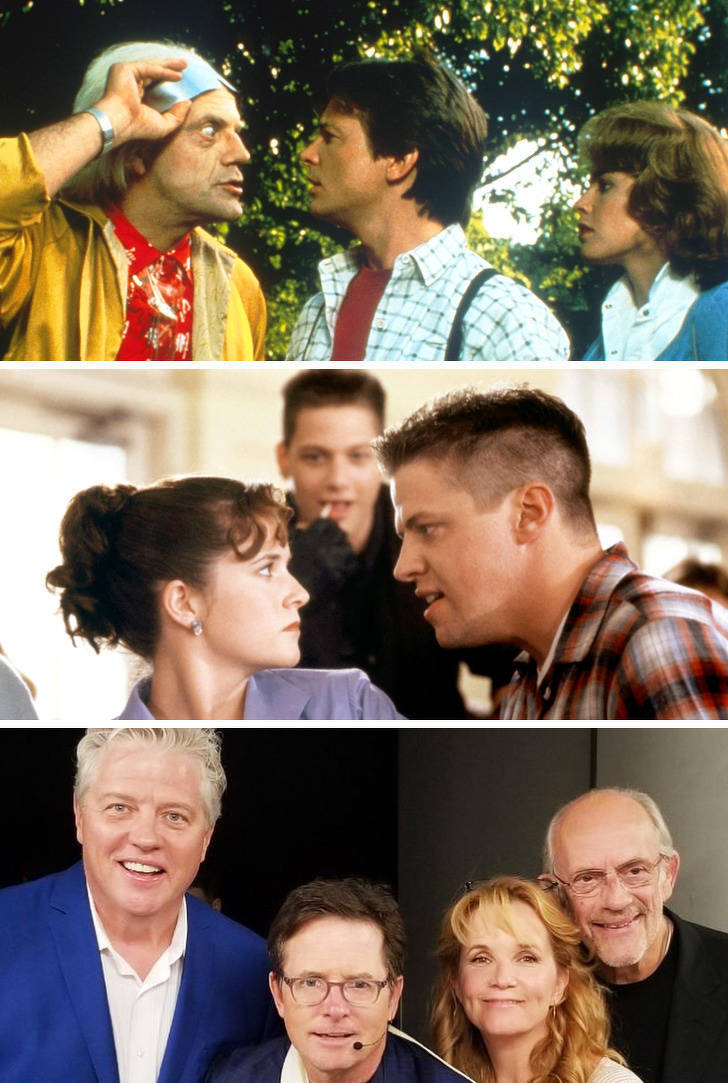 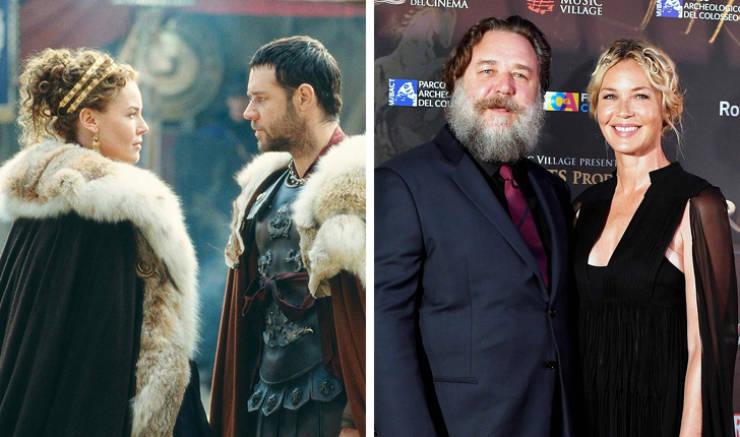 In 2018, Russell Crowe and Connie Nielsen got together at the Colosseum where there was a charity broadcast of Gladiator, which was originally released in 2000. 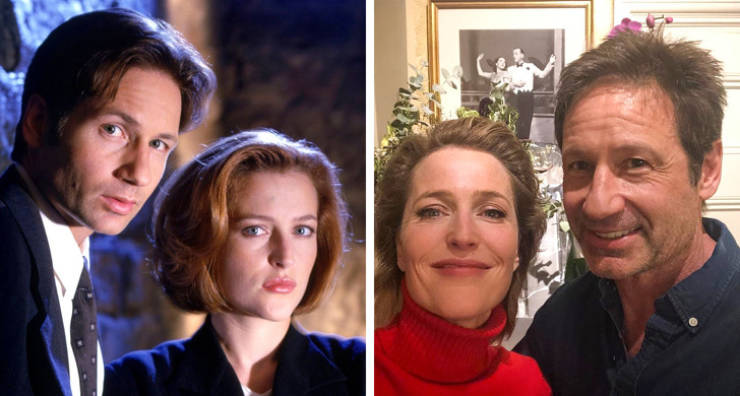 The X-Files was released in 1993. David Duchovny was 32 and Gillian Anderson was 24. In 2018, the 11th season was released, so Mulder and Scully got together again.

Recently, Gillian Anderson also posted a photo from the set of All About Eve where her former colleague came to visit her. 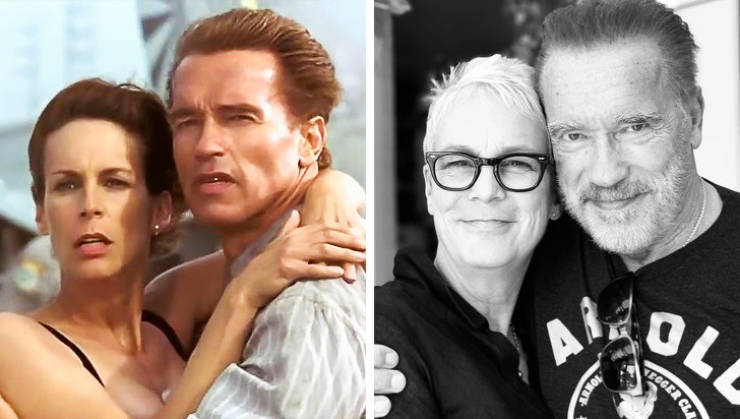 25 years after the release of True Lies, Jamie Lee Curtis and Arnold Schwarzenegger got together again. The actress posted a picture of them on her Instagram. Unfortunately, it’s not clear whether they’re going to work together again or not.