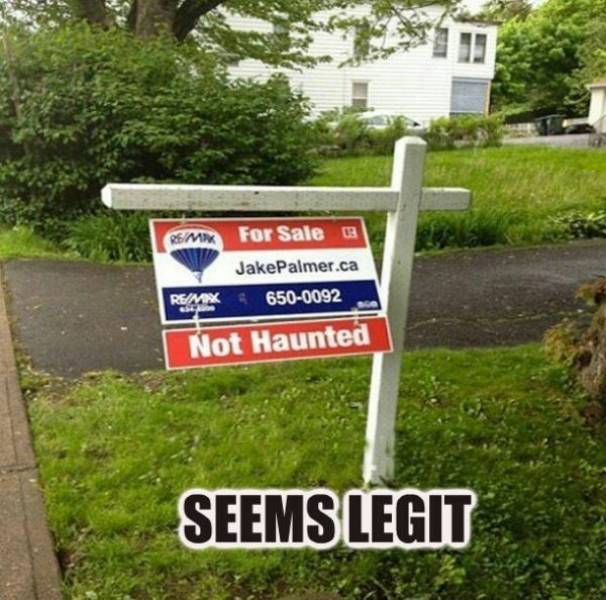 When I first bought my house a few years ago, the house next door had been vacant for several months, but after the first few weeks of moving in I saw a young woman inside the house. I never saw a vehicle or anything in the driveway, and I would only see her during the day. I kind of just assumed it was a woman sent to look after the property.

A few months go by, and the house is put up for sale at an ALARMINGLY low price (considering what I paid for mine). I later learned from the realtor that the previous owner had murdered his wife and then killed himself. He told me the couple’s names, so I googled them out of curiosity, and was beyond shocked to see a picture of the wife…because it was the same woman I had seen through the windows. The house has since sold and I haven’t seen her since, but I am truly a believer now. 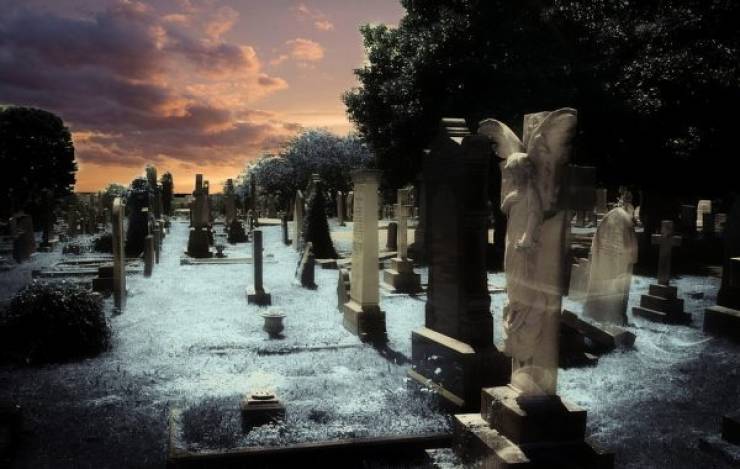 I live in an area of Tennessee that many people say is haunted. When I was in high school, a group of friends and I decided to go out at night to see if we could find anything. We walked around town and even went to the cemetery, but nothing happened.

That is, until we were driving away — still on the cemetery grounds. The two other girls in the car and I heard a bloodcurdling scream so loud that we had to physically cover our ears. We FREAKED out, but the craziest part of the story was that the three guys in the car didn’t hear a thing. Safe to say we got the heck out of there and didn’t question the ghost rumors again.

I don’t remember this myself, but my parents say that when I was young I would run into their room crying because ‘a man was in my closet.’ I described him as ‘a civil war soldier,’ which I couldn’t have known how to describe on my own, given my age. After a little research, my parents found out that the last people who had lived in that house had found rare civil war artifacts…

Was staying in one of the castles used for Hogwarts overnight with 10 other students. Middle of the night we get a group chat from the girls above us in the dorms that says the door won’t open. We go up. It can’t lock but 6 student athletes couldn’t make the door budge. We’re freaking out saying we’ll have to get staff to help and the door opens without anyone touching.

This was my dad’s experience. He heard someone walking around in the living room so he grabbed his pistol to investigate, as we lived in a bad part of Phoenix. As he walked in, he saw the chair rocking as if someone had brushed passed it and he got there just in time to see my sister and I’s bedroom door shut.

He walked in to see us both sound asleep, as well as the closet door click shut. He held up his gun and said, “I know you are there, I am armed. If you don’t come out with both hands up I will shoot you.” After a moment, he opened the closet door only to find it was empty.

We would go to visit my mother’s father every once in a while when I was younger, and whenever we would go to leave, he would walk us to the front door. We would then walk across the road, stand by our car, and wave goodbye. He would always be standing there waiting for us, waving back.

When my grandfather passed away, my mother went to his house to clean up (since he lived alone) and, as she left, she closed the door behind her, locked it, crossed the street, and got into her car. She said that, just out of habit, she looked up at the front door…where she SWEARS to this day that she saw my grandfather waving to his daughter for the last time. 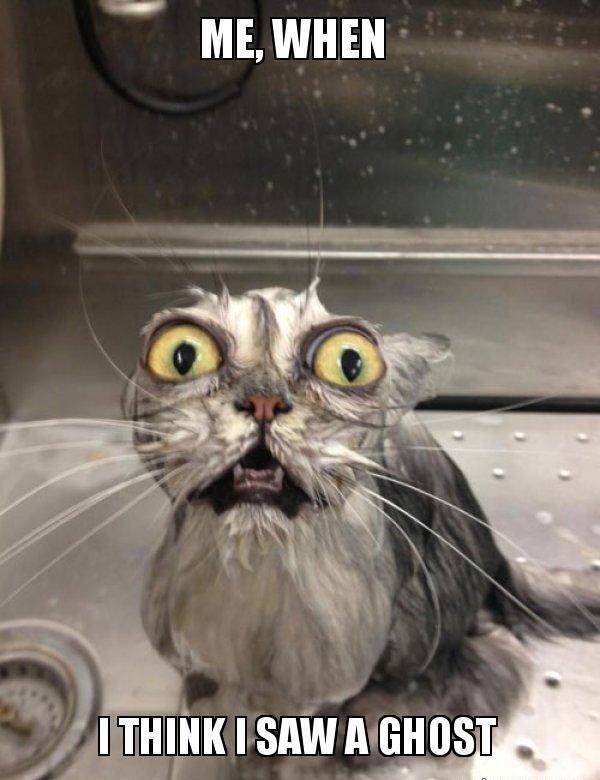 My cousin and my aunt had recently moved into a new apartment, and while I was hanging out there once, my cousin told me that they had a ghost. I didn’t believe them AT ALL, and a couple of weeks later we had a sleepover.

We were having some drinks and eating pizza in my cousin’s room when — from out of the corner of my eye — I saw a man go from the hallway to the restroom. He looked see-through, but you could clearly make out that it was a man with blue jeans and a white shirt on. It creeped me out so bad that I didn’t know what to do, so I turned to my cousin and explained what I’d just seen. He calmly confirmed that it was the exact same person he’d been seeing. I’ve been a believer since then.

When I was little, I would go to my parents’ room in the middle of the night, every night. Finally one night, my mom told me to go back to bed. My response to that was, “But mommy, I don’t want to play”. I then told her of the little girl who would stand at the end of my bed, holding a little boy’s hand, both wanting me to play. Clearly I was allowed to stay.

Later on at a family party, I saw a photograph. It was of the little girl who’d come to my room. I took it to my mom and everyone kind of flipped because it was a family member who’d died at age 5 of tuberculosis decades before.

I lived in a haunted house, so I was convinced that ghosts existed pretty early on because of that. The creepiest thing that would repeatedly occur was that we’d all hear our names being called loudly from right behind us. Nobody told anyone else this had happened to them until it happened to me, and my mom saw I was scared. With no context, she asked if I had heard my name being called and confirmed she’d experienced it too. 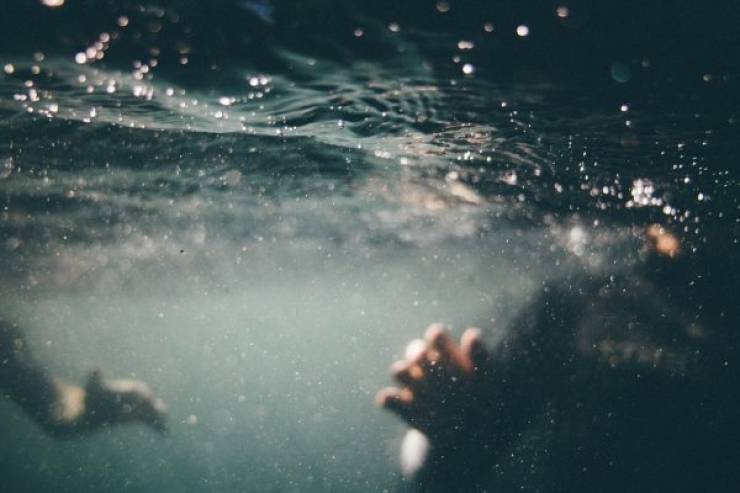 Worked at a public pool, I would work alone after hours cleaning the building and the pool. One night around 2 a.m. I’m cleaning the change rooms. The pool has been closed for 4 hours at this time.

I hear the sound of a child’s laughter and bare feet running across the pool deck. I go out and scan the area; there’s nobody in sight. The doors are all closed and locked, there is nowhere a kid could be hiding. No wet foot prints on the pool deck. I re-check the doors and the security monitors. I am the only person in the building. It was unsettling.

On a recent trip to New Orleans, I had some experiences that couldn’t be ignored. The spookiest was in a haunted house we visited. I was sitting with my back against a wall waiting for our group and my ponytail was tugged. I was already thinking about ghosts since the house was haunted, but as a non-believer, my brain immediately started to rationalize how it couldn’t have been a ghost. As soon as I tried to think of reasons it was not a ghost, my ponytail was tugged 2x times, much harder.

It turned out there was a camera in the room and I asked to watch the tape. Nothing, obviously, was between the back of my head and the wall – but you can see my started face and then me run away from the wall after it happened the second time! Hard not to believe after that!

One night, my grandmother was looking after me, and it was just the two of us in the house. I was sitting on the floor in front of her while we were watching TV. Suddenly, we heard loud footsteps upstairs, then one of the doors SLAMMED shut.

I grabbed onto her leg, because I was horrified that someone was in the house, but my grandma just looked up at the ceiling and yelled, ‘Don’t slam any doors in my house!’ I never got to talk to her about it, since she passed when I was still young, so I’ll never know who she was talking to…” 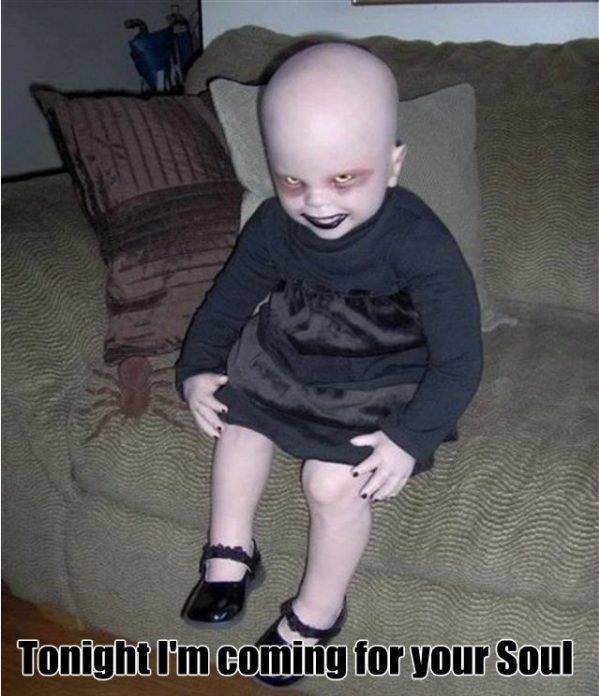 So, I was actually the reason my PARENTS are believers now, and I still get chills whenever my mom or dad tells this story. A lot of odd things happened building up to this, but this is the big one:

I was only one year old, and I was sleeping in-between them, but when they woke up, I wasn’t in the bed anymore. They searched EVERYWHERE for me and said that when they finally looked under the bed, they found me underneath it, directly in the middle where I’d be sleeping up top. They have no idea how I got there, and it completely spooked them.

My father passed away when I was around 7. Whenever my mom wasn’t home, my brother and I would hear footsteps upstairs. They originated from my dad’s side of the bed, continued into the hallway, and then stopped at the top of the stairs. It freaked us out at first, but — to this day — we still believe it was just him checking up on us.

When I was a kid, we lived in a city three hours away from my grandparents. They rarely visited, since my grandpa was suffering from an illness, and if they did visit, I typically knew in advance.

One day, I was looking out of the window and saw my grandpa waving at me from the driveway. I told my mom, super excited that they’d planned a surprise visit. My mom didn’t say anything. Years went by and I forgot about this, but she retold me that story recently…and apparently, my grandpa had just died that morning.