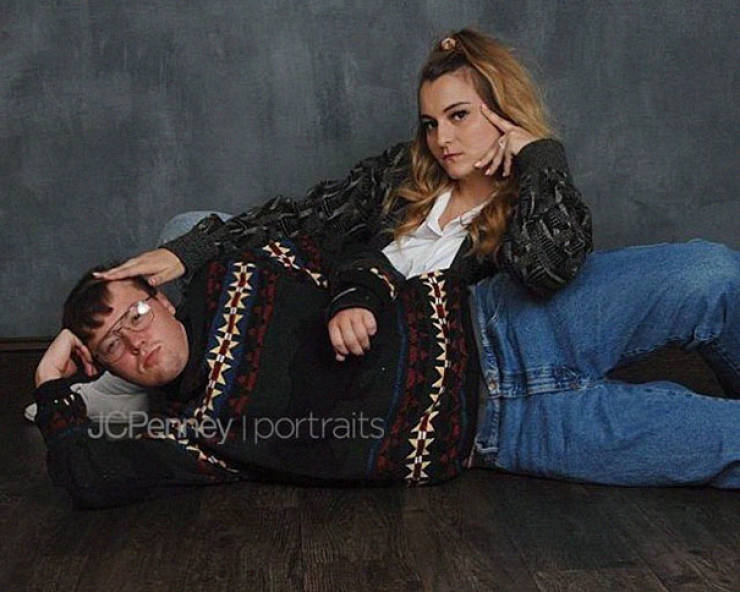 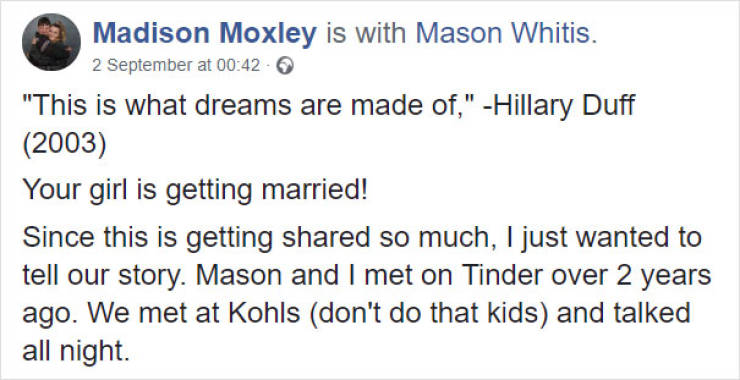 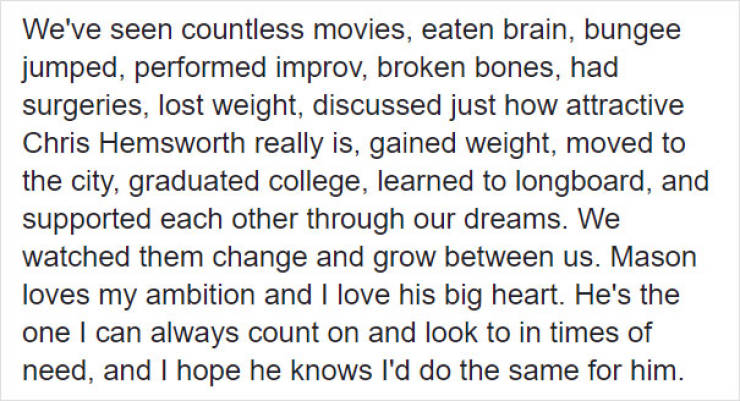 Madison and Mason’s Facebook post got a large following: they got over 6,400 likes and more than 155 comments. Furthermore, their pictures were shared on the social media website a humongous 10,000 times! Most couples would give their right arms for that kind of exposure. Some Facebook users said that they “can’t wait” to see the wedding photos. While others called the couple’s pictures “perfect” and said that they want a photo shoot just like this one.

The woman who turned the couple’s legendary photo shoot from just an idea into reality is Dawn Winebrenner. 25-year-old Dawn, who lives in Louisville, Kentucky,  told Bored Panda that she has been a photographer at JCPenney Portraits for nearly 4 years. “I have been involved in photography since 2010 when my mom got me my first digital camera and I realized I had a passion for photography. I will be graduating next year from Jefferson Community & Technical College.”

The pictures were very witty and funny 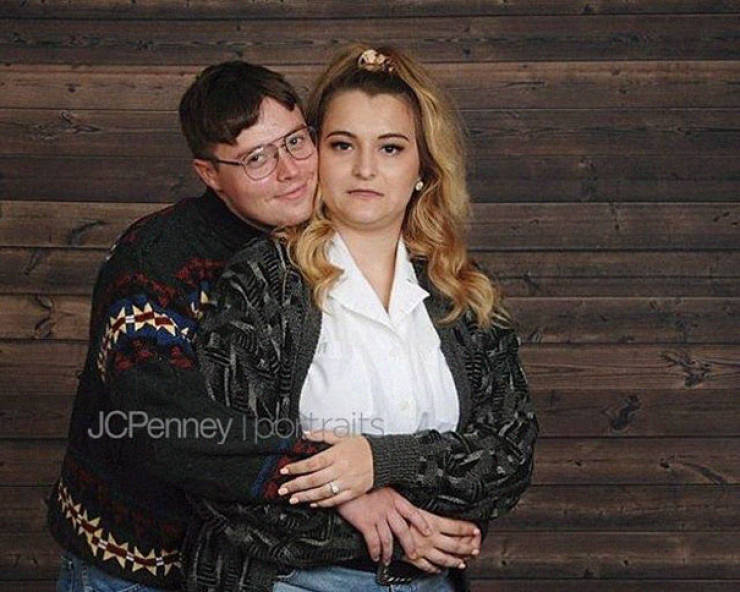 “I was working that day and actually was not going to be the one to photograph, but my associate gave me the session because I had talked to them earlier that day and made the appointment,” Dawn explained. 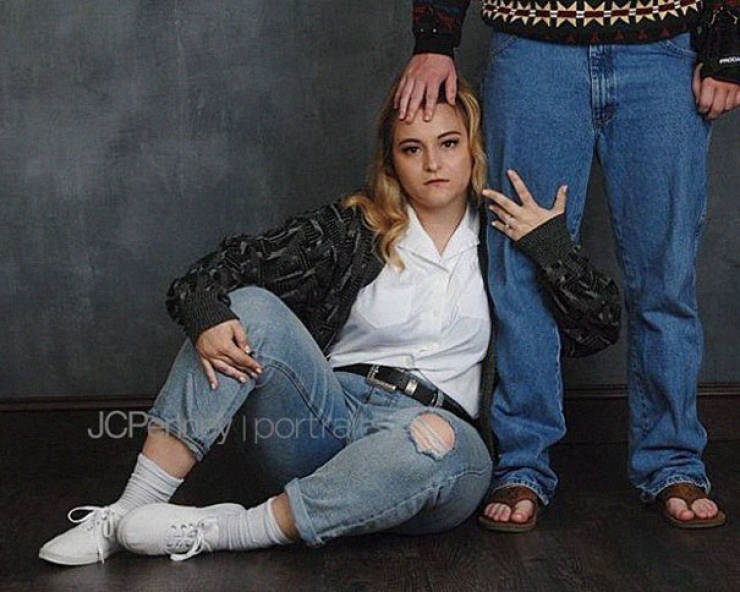 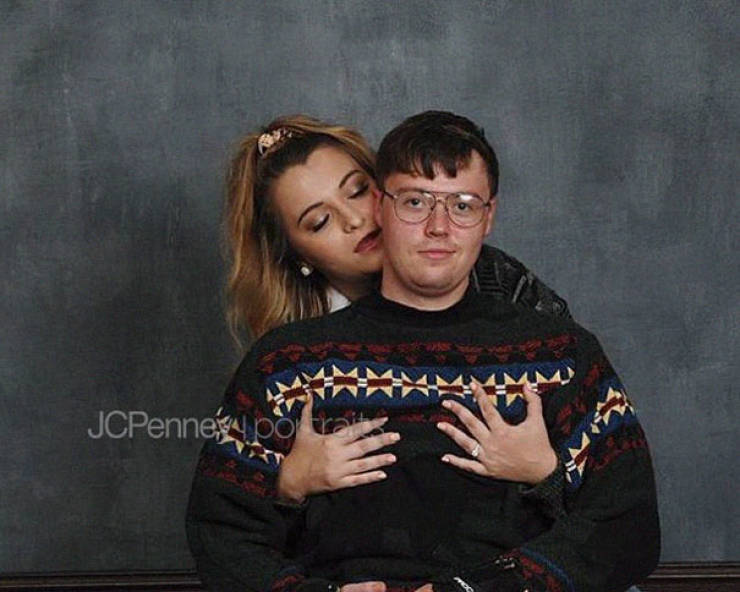 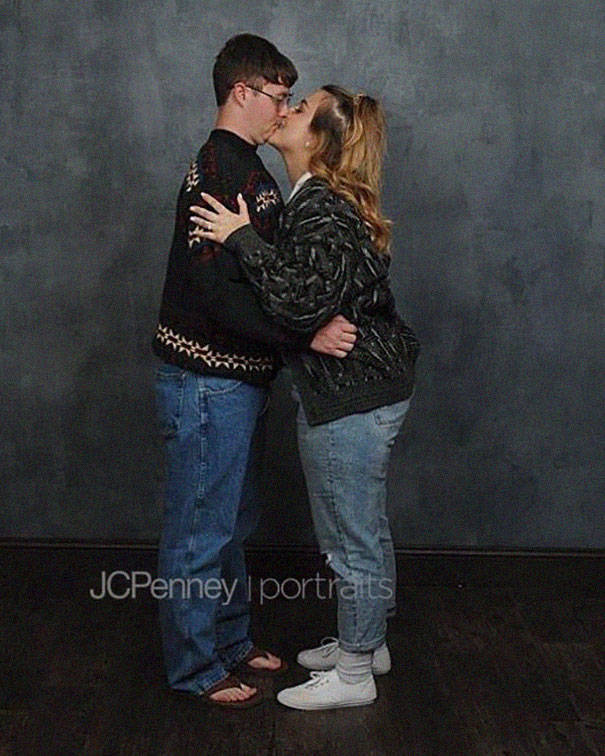 “Madison had called that day to figure out how it all worked and I talked to her and booked the appointment for her. We talked about ideas and what to bring. I was very excited about doing this engagement shoot. I have done several of the silly 80s shoots before —I would have to say about 3. So I had an idea of what I was going to make them do.” 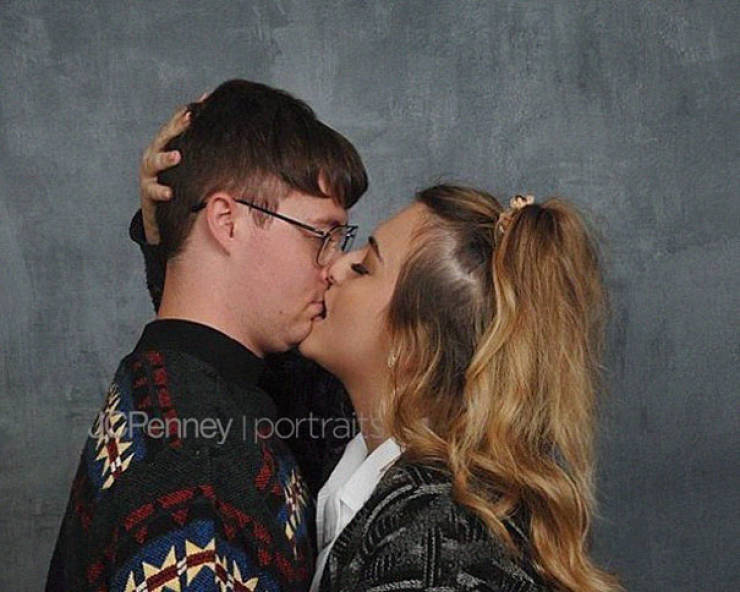 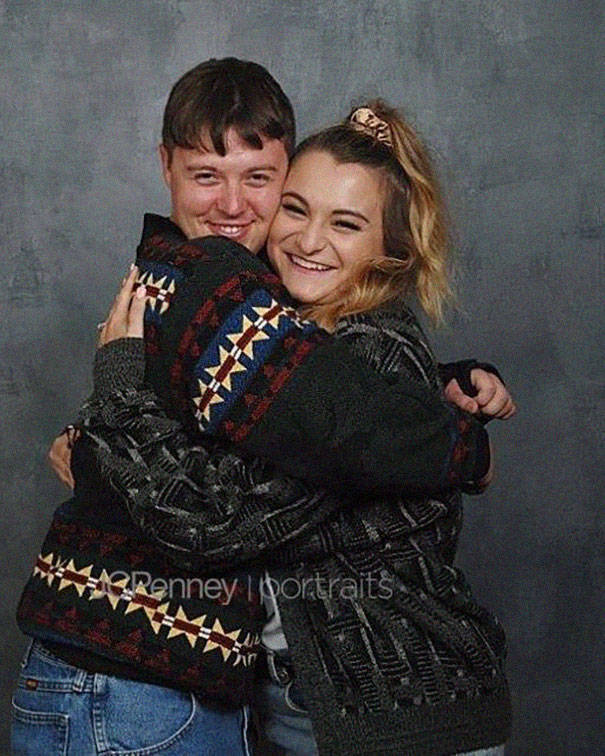 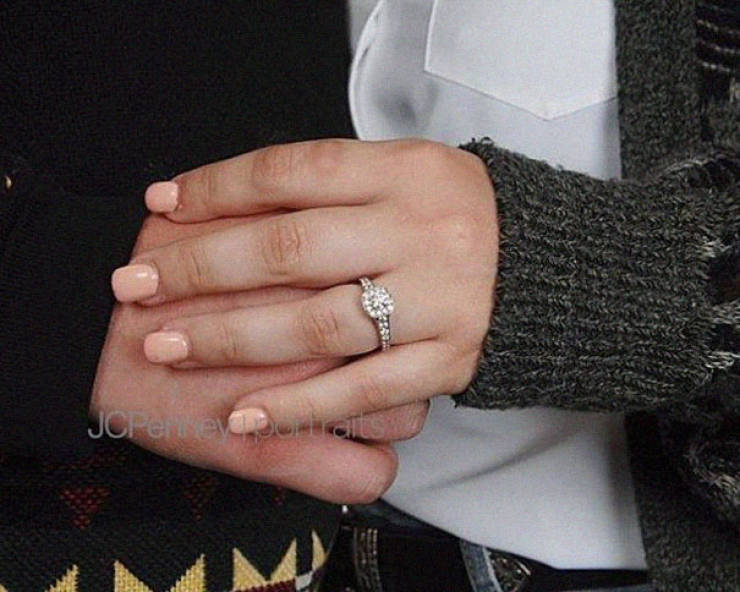 “When they came in the first thing I wanted to know if they had brought a ring box. I was going to do something silly, but they did not. I ran to the jewelry department and borrowed one from them. I ended up getting a shot of Mason on one knee and madison facing the other way,” Dawn explained to Bored Panda.

The internet thought the pictures were amazing, and they went viral 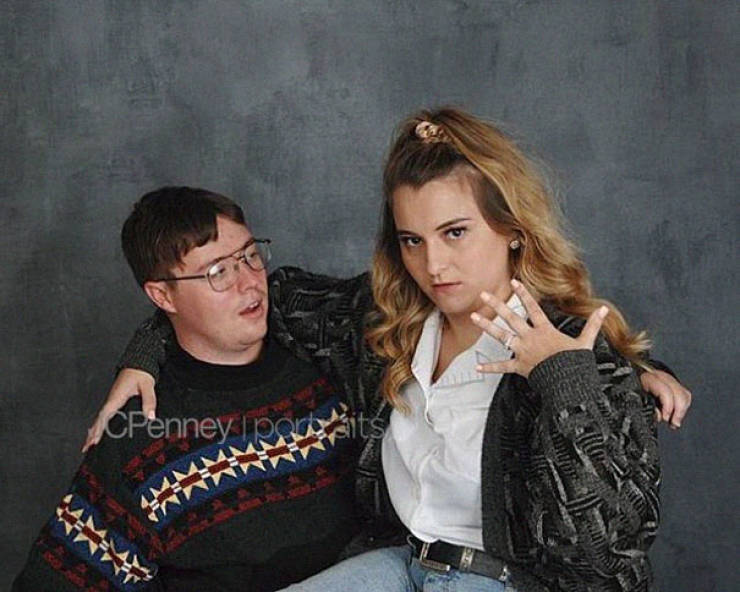 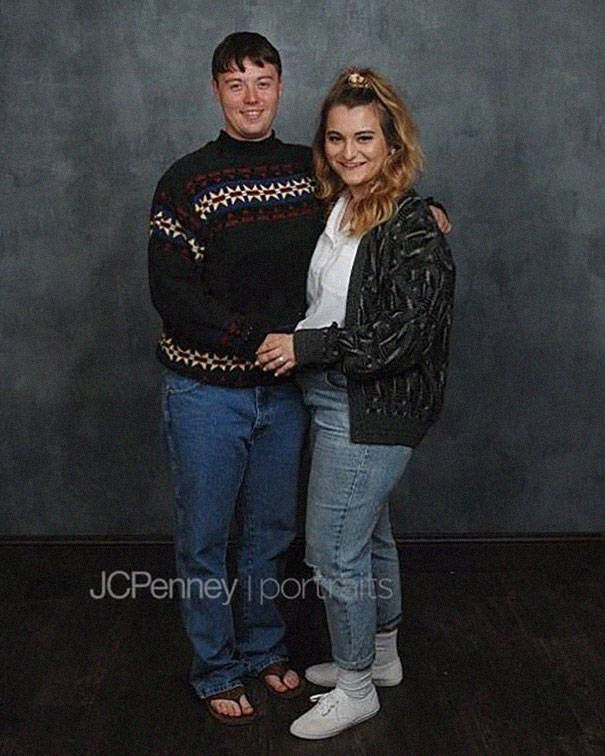 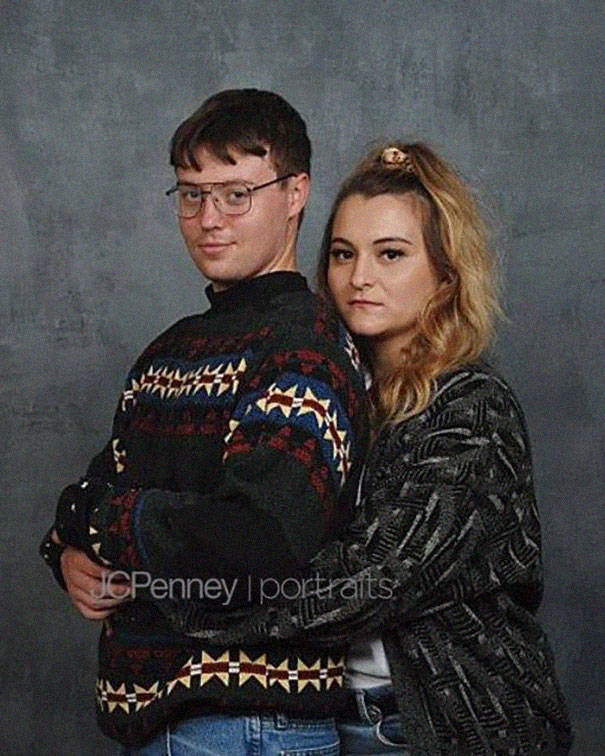 “We ended up revealing that there was no ring in the ring box and it was a silly little reveal. They were awesome to work with and we vibed off each other really well. They loved all my ideas for the posing. The main idea about the shoot was an 80-90s area silly photo shoot. It was awesome to work with two people that truly love each other and really enjoyed being around each other. They are both very kind people and I could tell that from being around them.” 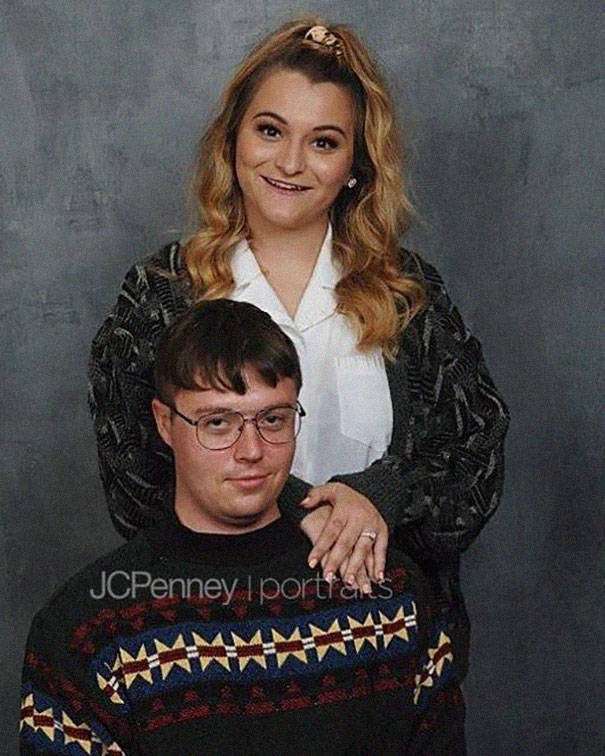 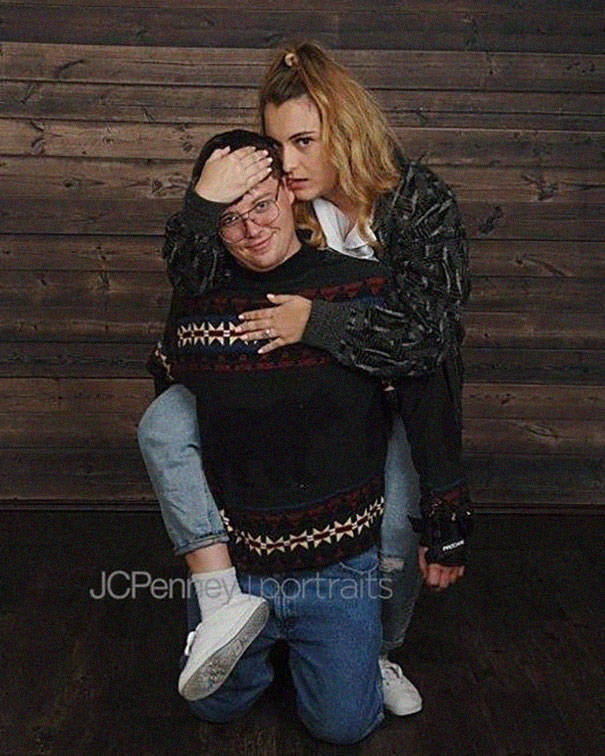 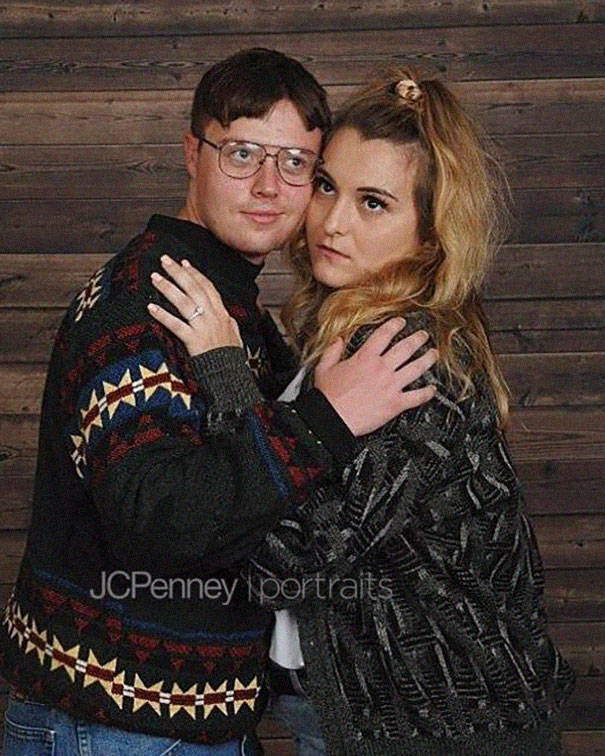 The inseparable duo looks really great wearing their ‘homey’ and ‘comfy’ sweaters. What’s more, the couple really does sound perfect when you realize just how similar they are to one another.

Madison writes in her post that the pair met on Tinder two years ago and learned just how many similarities there are in their lives. They were born in the same hospital two days apart, and have actually been in the same rooms as each other without meeting. Madison and Mason are both very open, and don’t like playing relationship ‘games’.

“Humor has been the centerpiece of our relationship. Mason does whatever he can do to make me laugh. You may think these photos were my idea, but Mason is the real mastermind.”

Madison and Mason didn’t want their fans to think that’s what they actually look and dress like, so they shared a ‘normal’ picture 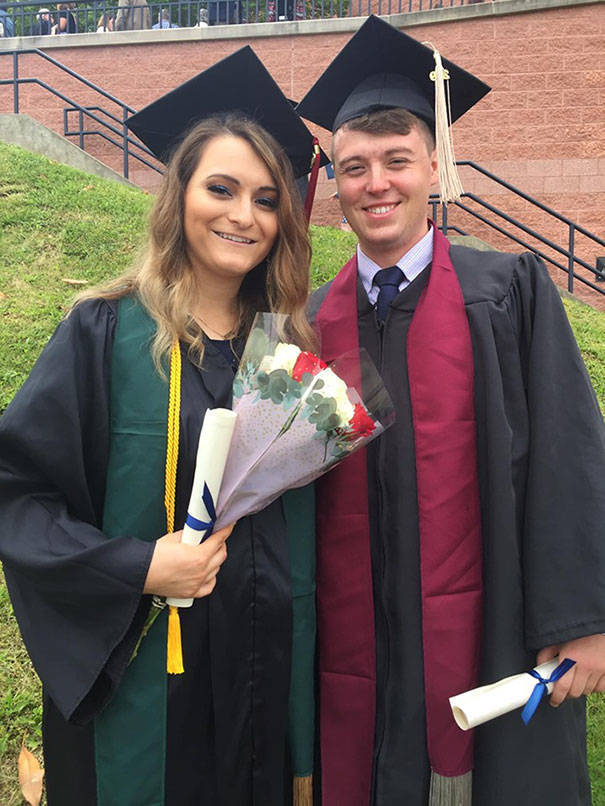 If you or somebody you know recently got engaged, here are some handy relationship tips. Inspiring Tips writes that neither person should try to change the other one. What’s more, open and honest communication is a plus because nobody is a superhero who can read minds.

And it’s very important to refrain from poking fun at your loved one in front of other people — you’re a team and you can deal with your issues far from prying eyes. However, it looks like Madison and Mason, at least, won’t need these tips because they seem to be following them already.