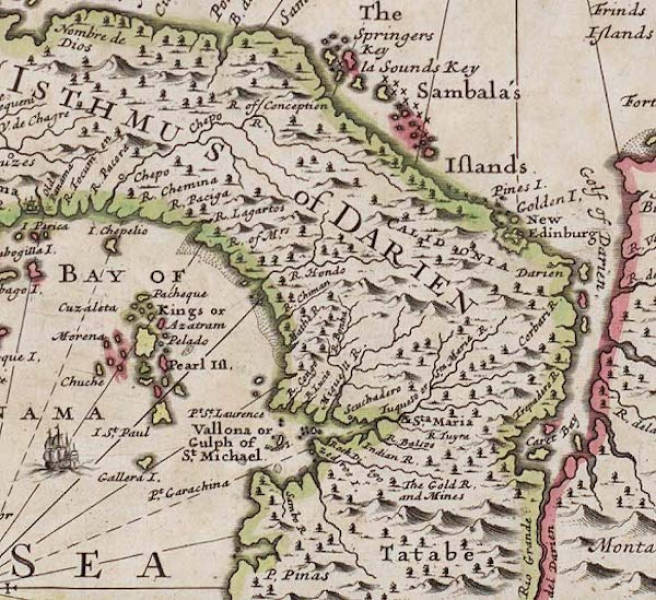 This failed mega project changed the course of Scottish history. It was a plan, conceived in the 1690’s, for the Kingdom of Scotland to build a colony in Panama. They also wanted to build an overland route connecting the pacific and Atlantic Oceans to make them a huge trading power.

They were backed by approximately 20% of all the money circulating in Scotland at the time, which accounts to billions today.

However, poor planning, bad management, English/Spanish attacks and disease caused the plan to fail. The project was abandoned in 1700. This resulted in Scotland becoming impoverished and allowed England to take over the country. 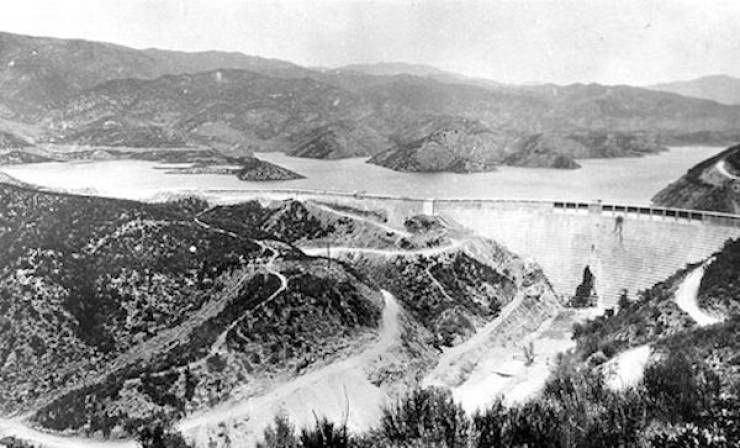 Located in the San Francisquito Canyon, 40 miles from downtown LA, the dam was built between 1924 and 1926. It was a key part of the LA Aqueduct and was the main source of the city’s water. 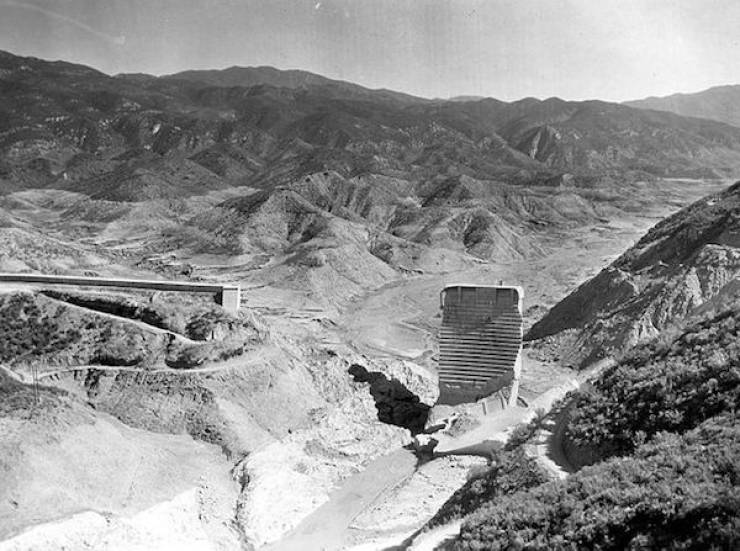 It was the brainchild of self-taught civil engineer William Mullholland, and was full of engineering defects, built on shaky foundations, in an area with unsuitable geology for a dam.

But, he was cleared of wrongdoing and got a Drive named after him. Killed his career though. 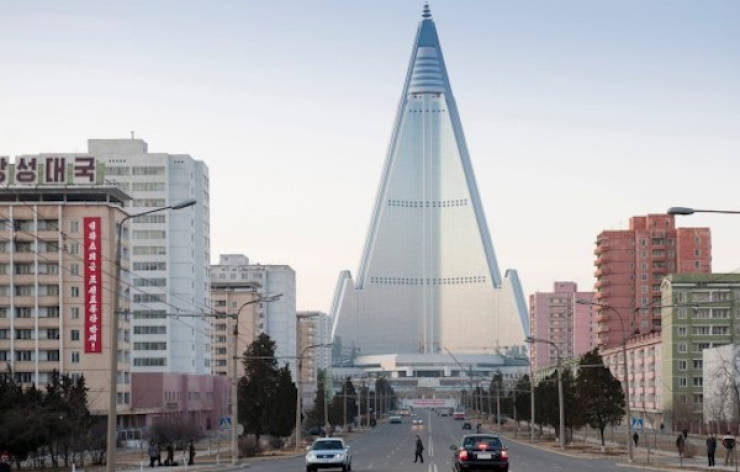 This hotel was meant to be a symbol of prosperity, but ended up a ghost building. Construction of the 105-story building began in 1987 and ended in 1992, when the funds dried up after the Soviet Union collapsed.

Work began again in 2008, but only the exterior of the “Hotel of Doom” was completed. Still nothing inside though. By this point, North Korea had sunk half a billion dollars into the structure.

Finally, in 2017, roads were built to the hotel, and LEDs were installed outside. Still no rooms, though. 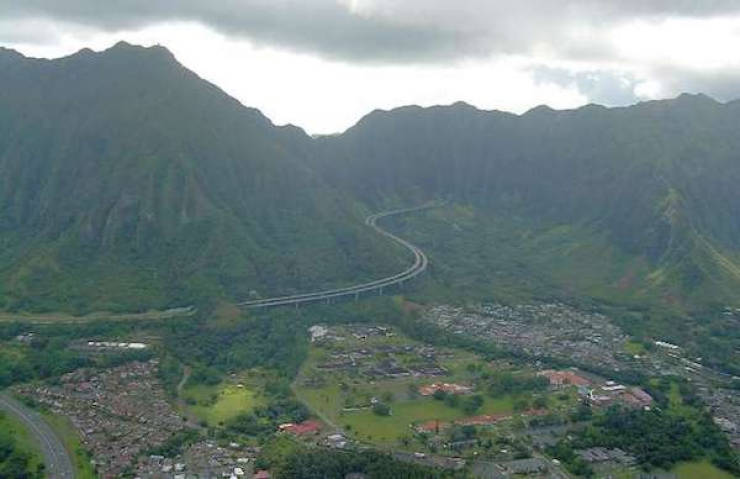 To date, this is the most expensive US highway mega project on a cost/mile basis. Proposed back in the 60’s, it was naturally opposed by the native Hawaiians.

It didn’t get started until 20 years later due to protests, environmental concerns and legal challenges, and ended up costing $1.3 billion at the time.

Completed in 1997, it’s considered cursed and most native Hawaiians refuse to drive on it, which accounts for a hefty portion of the population. 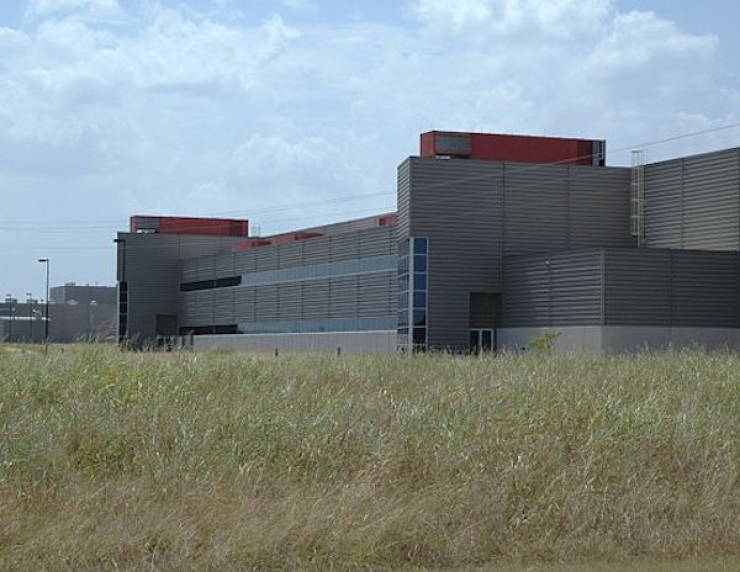 Nicknamed “The Desertron,” this Super collider was a proposed particle accelerator project that would have been the most powerful in the world.

Work began in the 80’s, and by the early 1990’s, around 15 miles of tunnels were bored and 17 shafts sunk on the site. Congress had to pull the plug because the budget had ballooned from a proposed $4.4 billion to $11 billion.

All in all, $2 billion was wasted on this empty building that still has no use. 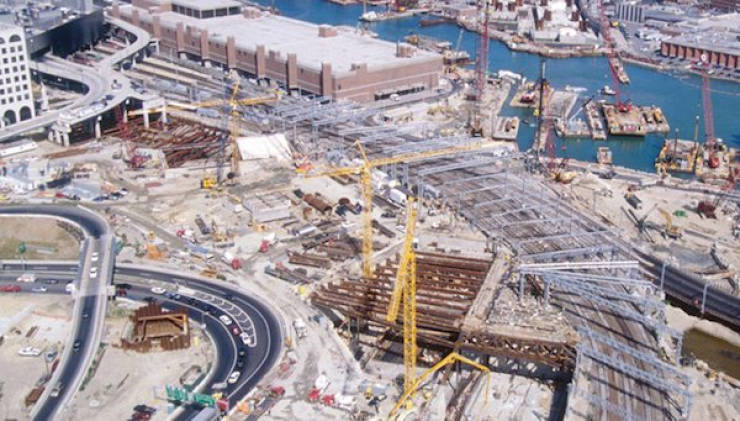 If you’re a native of the city, you know how much of a pain in the ass this was. Planned back in 1982, it was the most expensive highway project in the US, and plagued with cost overruns, delays, leaks, design flaws, substandard materials, criminal arrests and one death.

$22 billion dollars later, no one’s sure it was worth it. 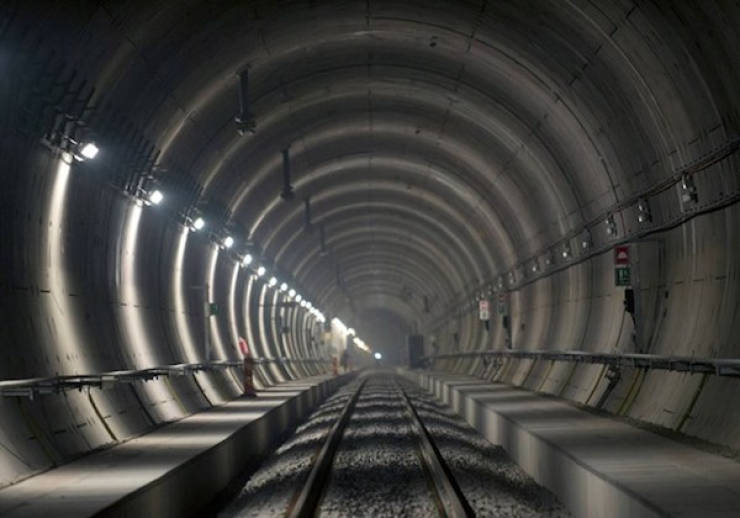 Construction began in 1992 on a 5.4 mile rail tunnel, and it should have been done by 1995. Instead, groundwater began seeping in, causing trouble for the engineers. Then, 59 feet in, the drill broke down.

Shortly after starting, the principal contractor went bust and a new company took over. They used a toxic substance called Rhoca-Gil to seal the rocks, but ended up poisoning the fish and cattle in the area. 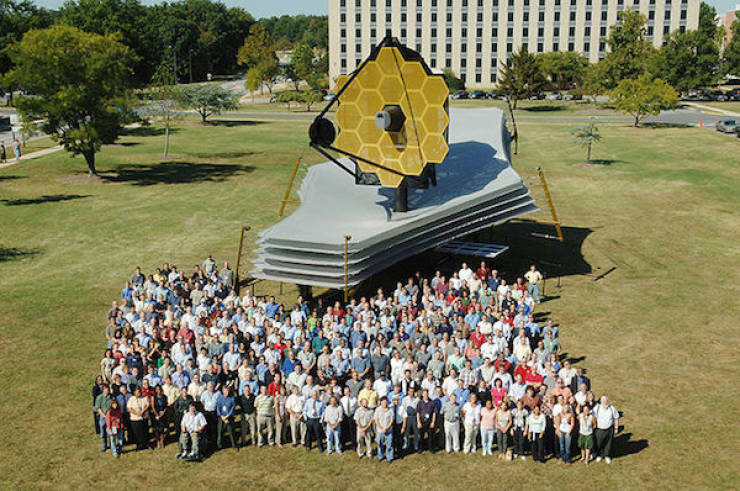 This was meant to be the replacement for the Hubble Space Telescope, with a bigger mirror and the capacity to capture images from farther away. Envisioned in 1996, it was supposed to launch in 2007 at a cost of $1 billion. Now, it sits at $9.7 billion and has been delayed until 2021.

The reason for the delay is all about human error. From incorrect cleaning solvents and lose screws, the engineers have had a heck of at time getting it done. But it’s been confirmed that as of August 2019, it’s completely finished. That’s something. 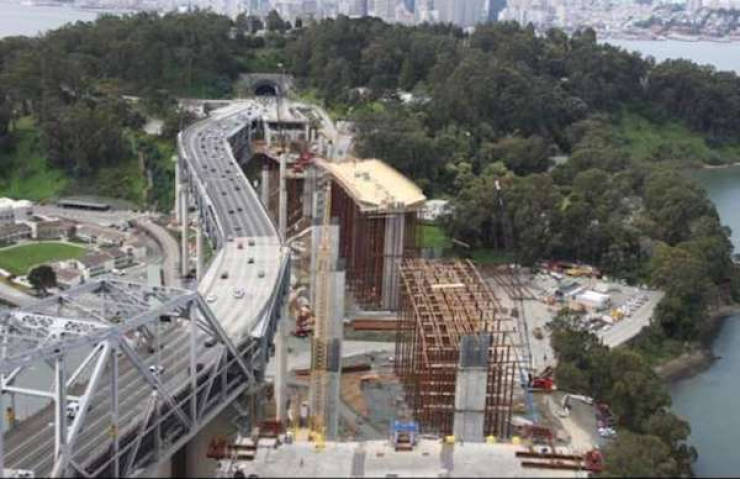 This ended up being the most expensive public works mega project in California history. The hope was to build an earthquake-proof structure, and it began in 2002, with a $2.6 billion budget.

But, design defects, water leaks, bolt failures and a welding controversy led to an FBI investigation that shut things down for a while. It was finally finished in 2013, with a final bill of $5.4 billion. 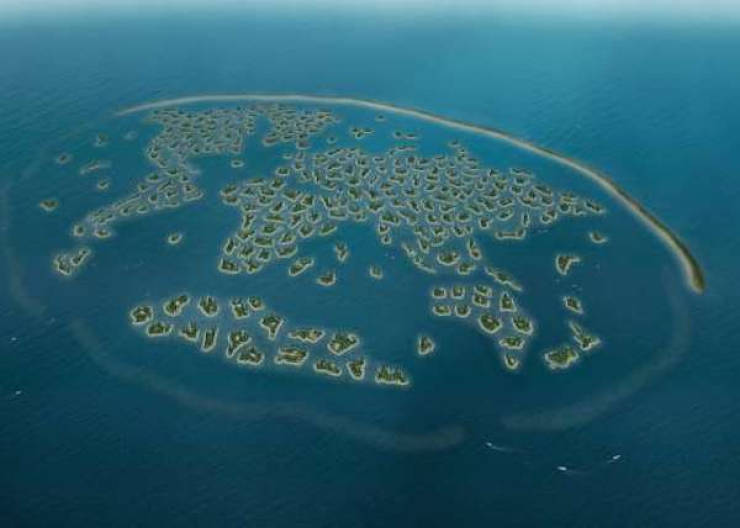 Back in 2003, Dubai announced that they were going to build an artificial archipelago of 300 islands off the coast, made to look like a map of the world. Due to the global financial crisis and the collapse of the Dubai property market, work ceased in 2008.

Some of the islands have been privately developed, while some of the others might be sinking into the ocean. At the moment, there’s a $5 billion Heart of Europe development going on, aiming for an opening date of 2020, but that’s not guaranteed.

The rest of the islands lie empty. 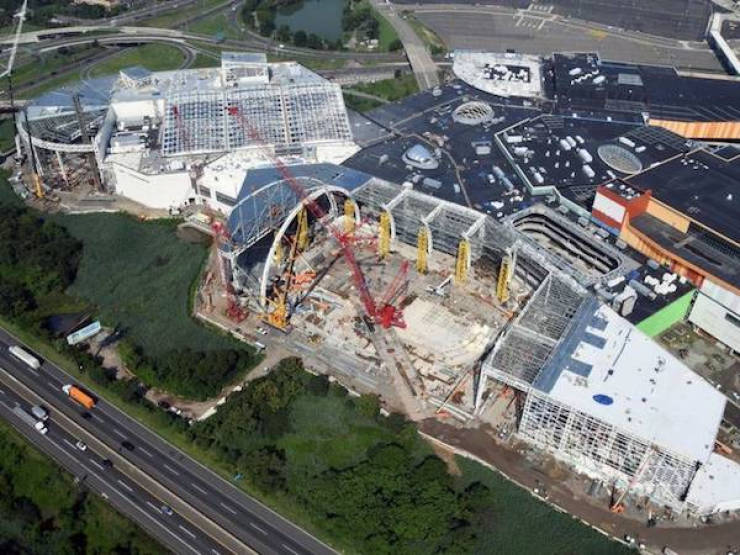 Proposed back in 2002, this was supposed to be an epic mall with over 500 stores, an indoor ski slope, hockey arena, concert venue, and waterpark. Meant to be on par with the Mall of America and the West Edmonton Mall, this is a huge white elephant.

Plagued by investor bankruptcies, legal challenges, ballooning costs, and a roof collapse, have pushed the opening day from 2006 to this October. 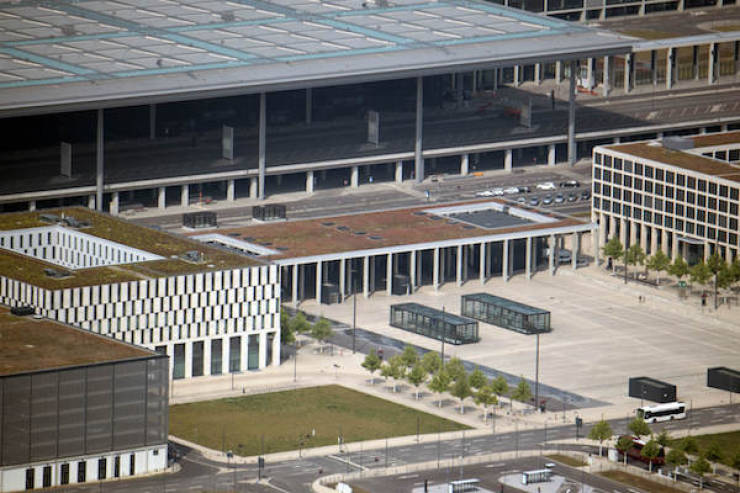 Planning for this airport started in 1989, but the whole thing wasn’t approved until 2006. Construction began then, with a target of 2011 to open. They also budgeted $2.7 billion. It was all wishful thinking.

At the moment, a series of colossal f#$k ups have prevented the opening until 2020. From the wrong size of escalator, to not enough check-in desks, the airport is now costing $6 billion and counting. 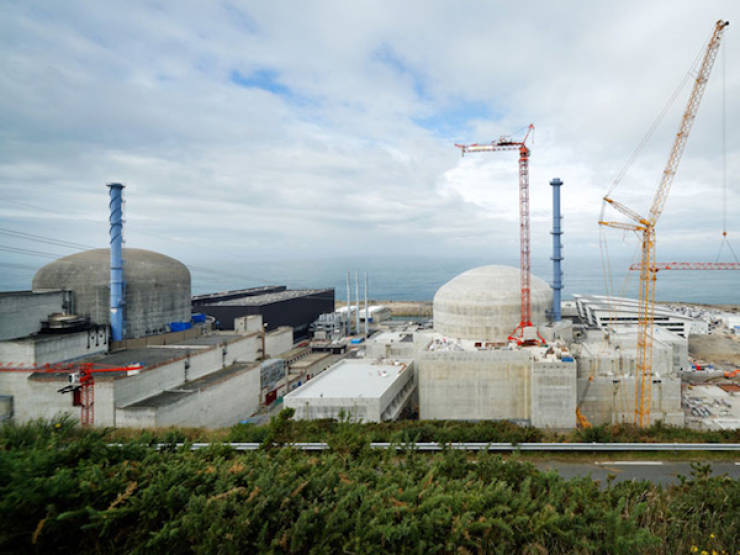 This state-of-the-art reactor at the Flamanville Nuclear Power Plant was supposed to start in 2007 and be fully operational in 2012.

It’s still unfinished. Several setback, including issues with welding, steel strength and explosions on site have upped the costs. Now, they’re looking at a 2022 operational date, and a bill of $12 billion+. 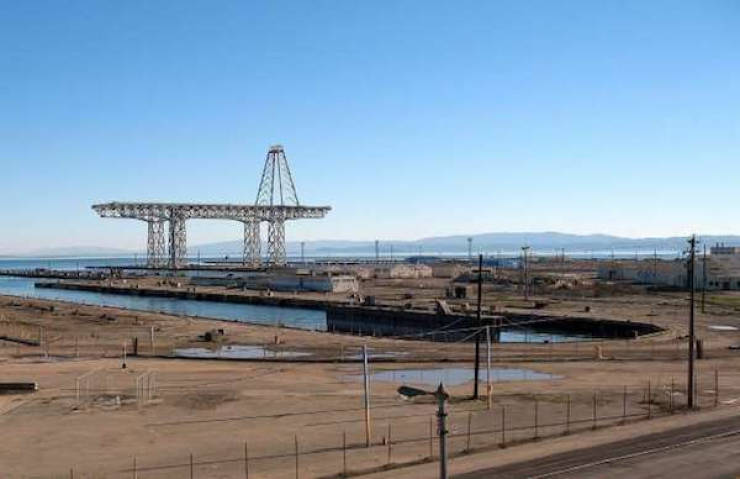 This area here was supposed to be the subject of the largest redevelopment project in the city since the 1906 earthquake. They were planning to build over 12,000 affordable homes, offices, stores, restaurants and green spaces. Scheduled for a 2030 completion, they’d already sold units and broke ground.

Except there was a small problem; the site was a covert nuclear testing site for the US military from the 40’s to the 60’s. And the levels are still dangerous.

The company that was charged with the toxic clean up, and the development corp are now the subject of a huge lawsuit for falsifying reports. 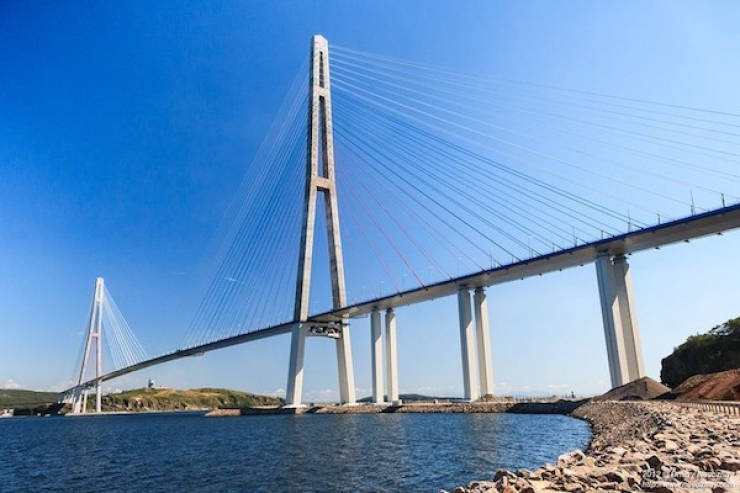 This is the longest cable-stayed bridge in the world and was built specifically for a 2012 summit of the Asia-Pacific Economic Community. Costing $1.1 billion, it connects the city to an island of 5,300.

Built for a daily traffic of 50,000 cars, it barely sees 1% of that. Russky Island was reportedly earmarked to become a tourist resort, but to date, nothing’s happened. 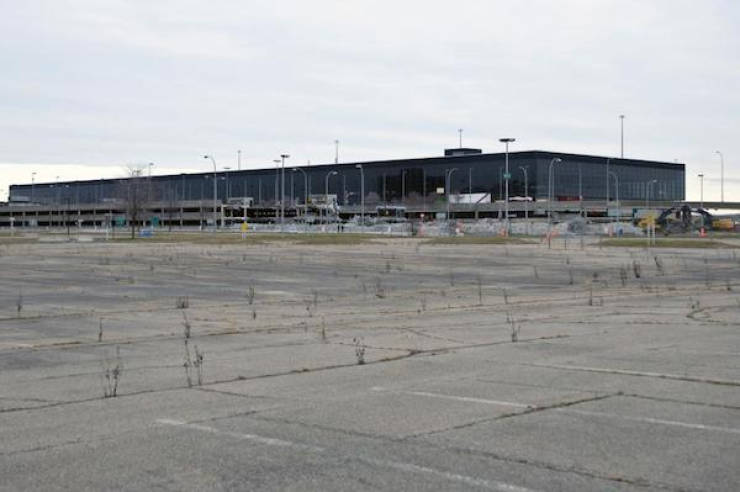 The Mirabel International Airport was opened in 1975 as replacement for the existing Dorval Airport. Costing $1.8 billion in today’s money, it was a huge drag. On one hand, it was 26 miles from downtown Montreal, so it had very little traffic from passengers.

By the early 00’s, airlines had abandoned the airport and Dorval was expanded and renamed Trudeau Airport. The terminal has since been demolished and the existing property is used for cargo flights and film sets. 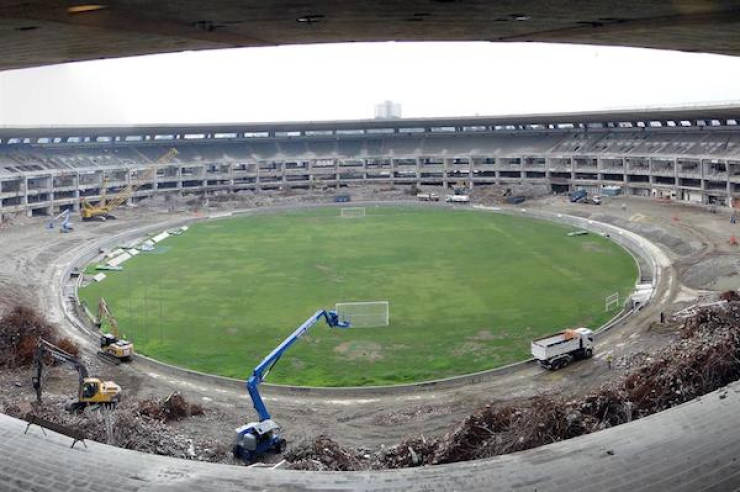 Now, they’re poorly maintained, disused or thoughtlessly repurposed. The worst part of it is, it’s public money that’s being used upkeep what they can, and that doesn’t even include the left overs from the Rio Olympics two years later. 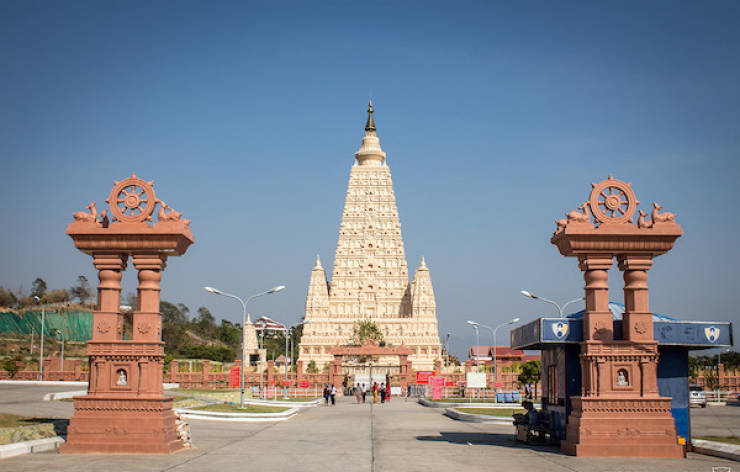 Over a 10 year period, a new capital city was built in Myanmar, at the behest of the military dictatorship. There are wide boulevards, palatial villas, public buildings and a safari park. The only thing is doesn’t have, is residents.

Despite official records saying that a million people live there, no one actually does. It’s a brand new, $4 billion, ghost city. 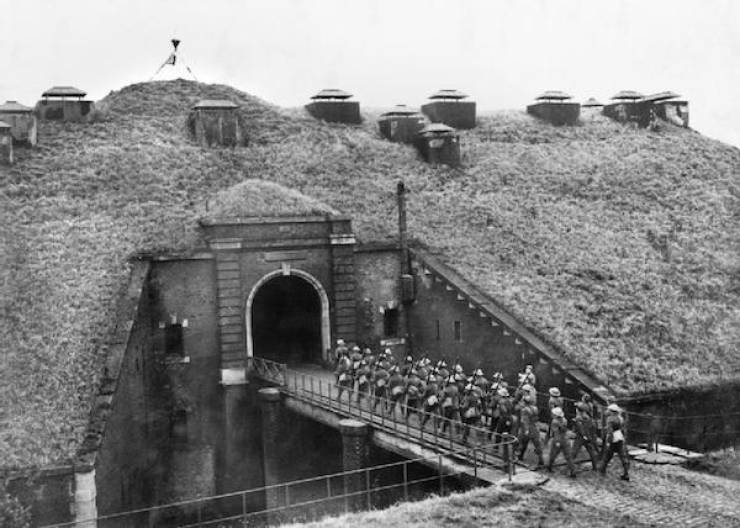 Including this for the irony. This was built during the 1930’s, for a staggering cost of 3 billion Francs ($3.7 billion dollars today.) It was a series of obstacles, fortifications and weapons stretching along the France’s borders with Italy, Switzerland, Germany and Luxembourg. The plan was to deter Nazi troops.

Except, they forgot about the Ardennes forest, where they figured the terrain was too tough for the Germans. It wasn’t. They invaded in 1940 and occupied the country.