What You Didn’t See In Christmas Movies (17 pics) 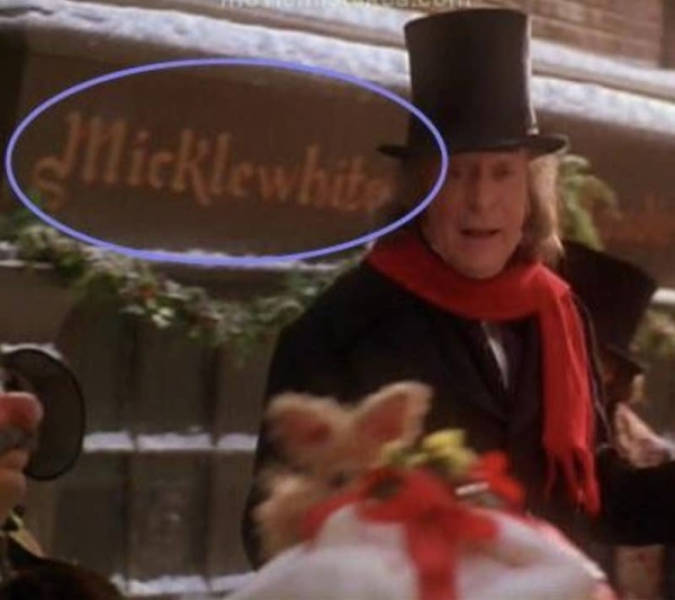 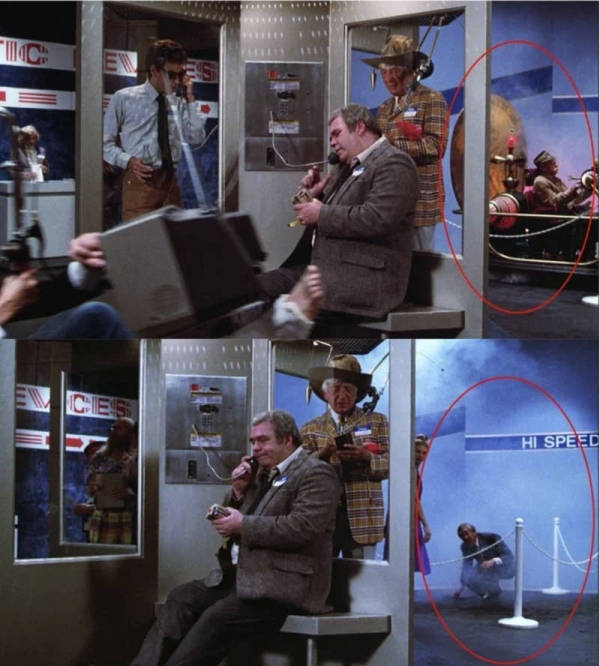 In Gremlins, when the father is in the phone booth, the time machine from The Time Machine can be seen for a split second before disappearing. 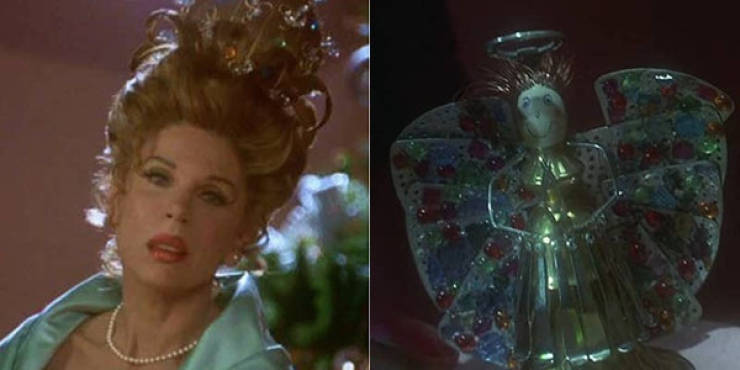 In How the Grinch Stole Christmas, Martha May Who can be seen wearing jewels in her hair as an adult that were given to her as a child by a young Grinch. 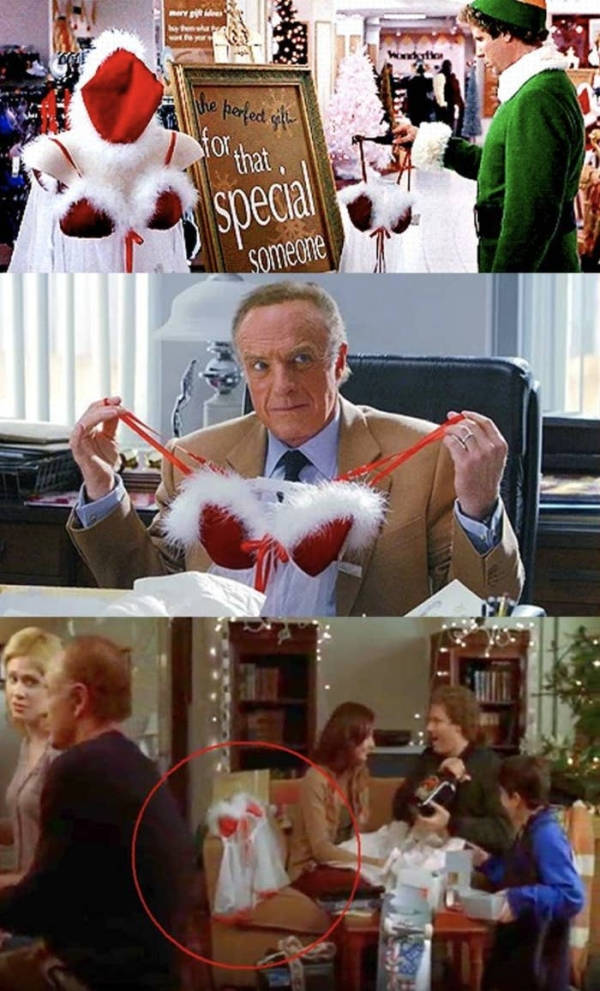 In Elf, buddy buys some sexy lingerie for his dad, Walter. Later in the movie, Walter re-gifts it to his wife.

During Linus’ speech in A Charlie Brown Christmas, when he says, “fear not,” he drops his blanket as symbolism. 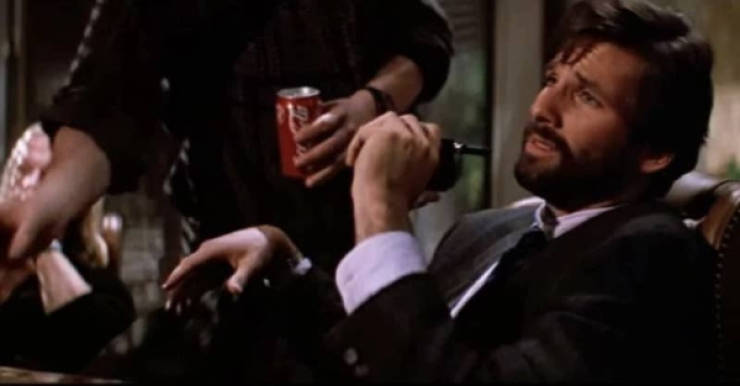 Early in Die Hard we see Ellis snorting some coke. Later in the movie when he asks for coke, the terrorists misinterpret him and bring him a can of Coke Cola Classic. 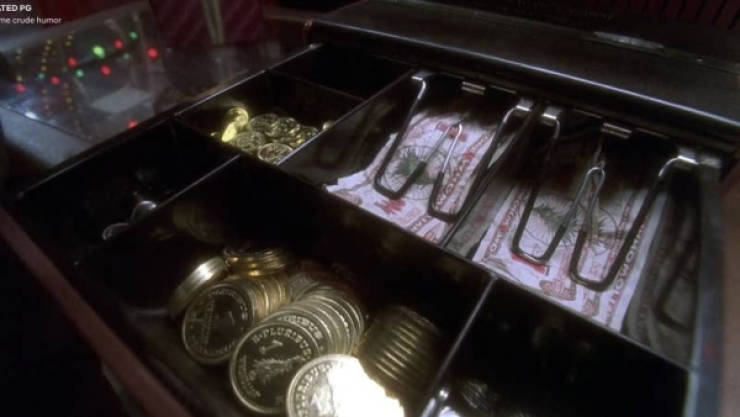 In How the Grinch Stole Christmas, the Whoville currency reads, “E Pluribus Whonum,” a play on American Currency.

Also in Elf, A Christmas Story’s Ralphie (Peter Billingsley) plays one of the elfs in Santa’s Workshop. 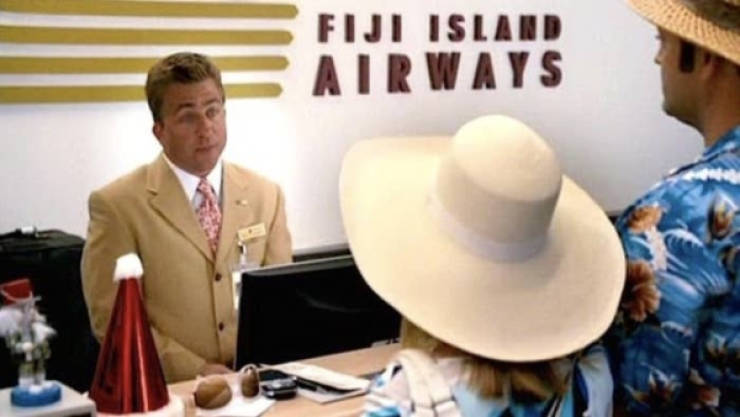 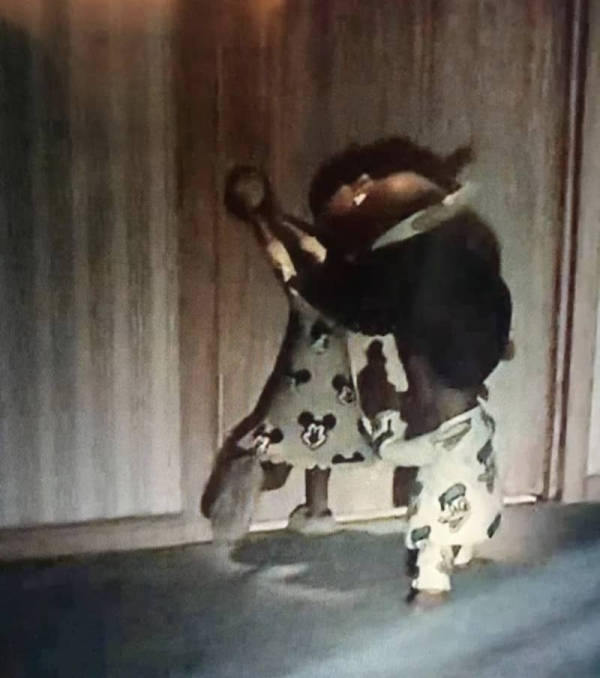 In The Nightmare Before Christmas, some of the kids who receive presents are wearing pajamas with Mickey Mouse and Donald Duck print on them. 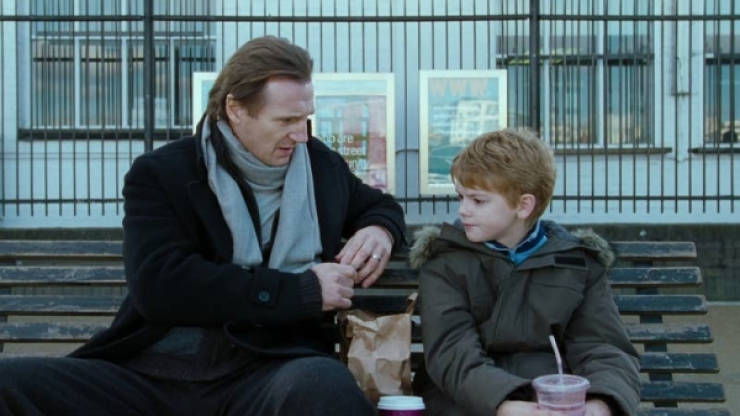 By the end of Love Actually it seems very little love actually happens. However, Sam goes from calling his step-father “Daniel,” to calling him “dad” – one of the only successful love stories in the movie. 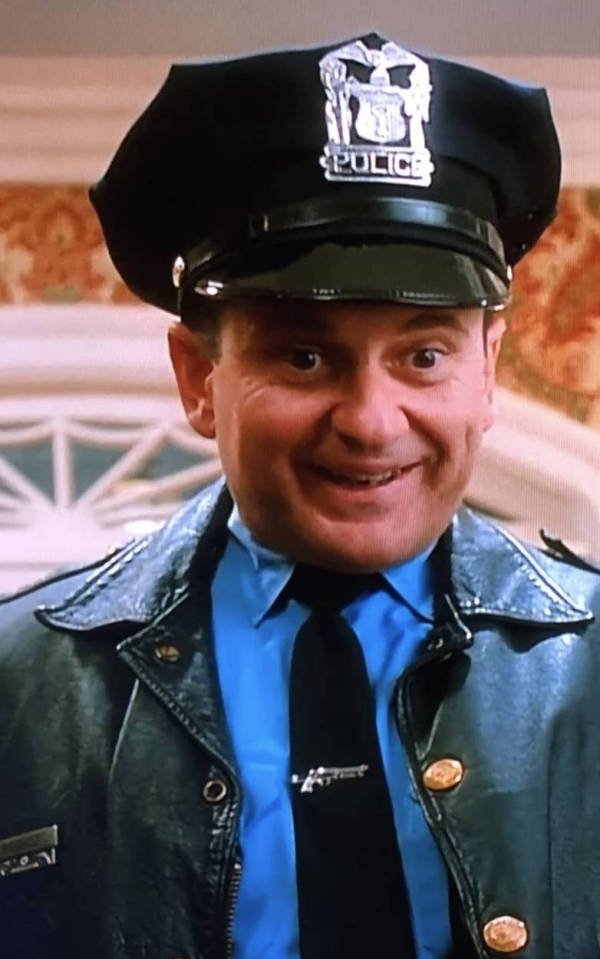 In Home Alone, Harry (Joe Pesci) can be seen wearing a tie pin shaped like a revolver while dressed as a police officer. 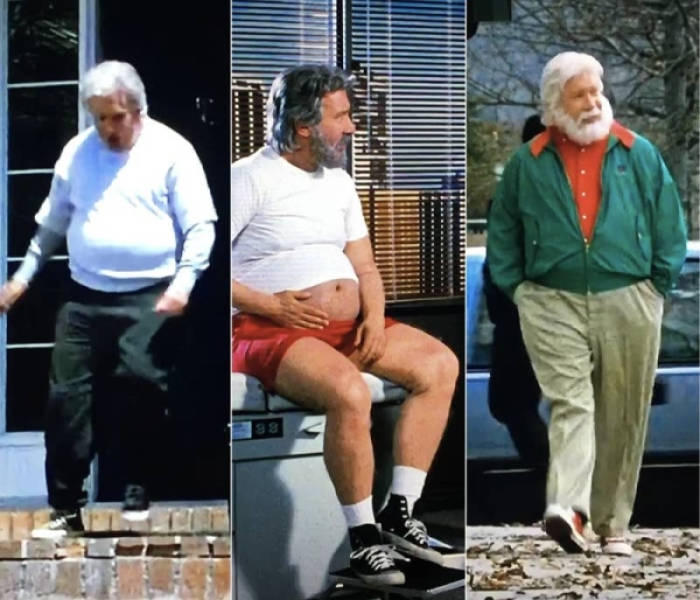 During The Santa Clause, Scott can be seen wearing black Converse while in denial about becoming Santa. Once he accepts the change, however, he begins wearing red Chucks. 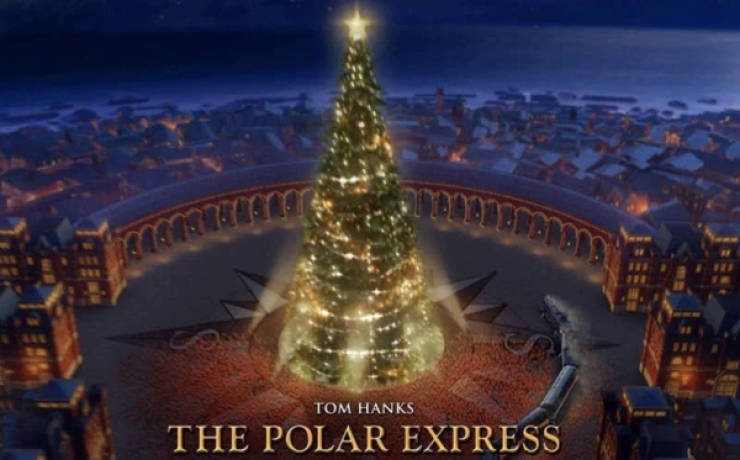 In Polar Express, every direction seen on compasses is south, because from the north pole there is only one direction you can travel. 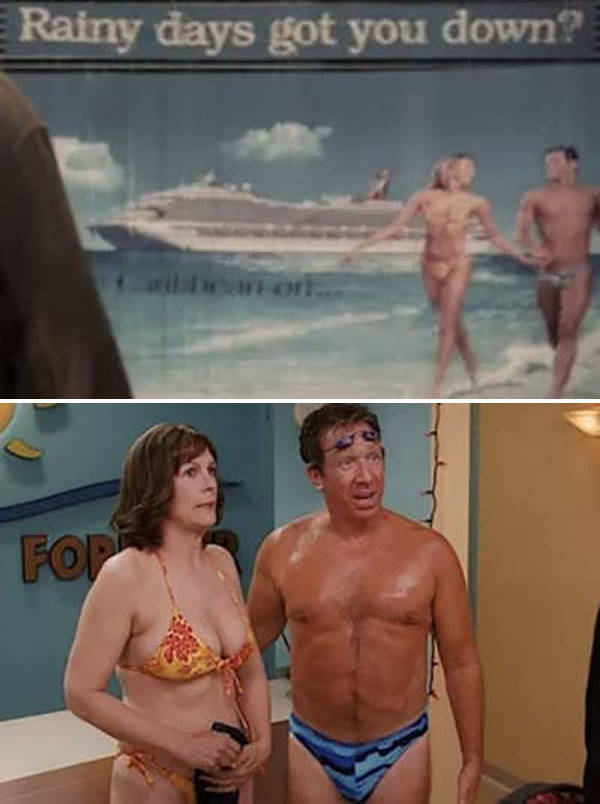 At the beginning of Christmas With The Kranks, we are shown an advertisement of a couple running along the beach. Later in the movie, Luther and Nora are seen wearing exactly the same swimwear. 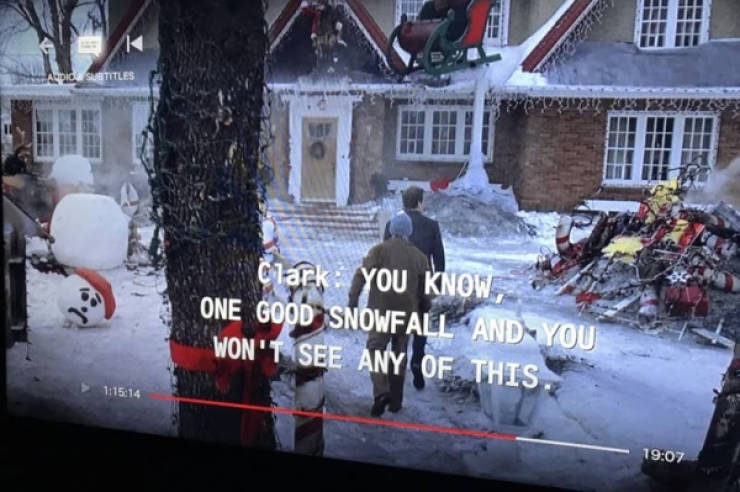 After all the Christmas decoration are destroyed in Just Friends, the snowman’s face can be seen frowning, instead of smiling like earlier in the film. 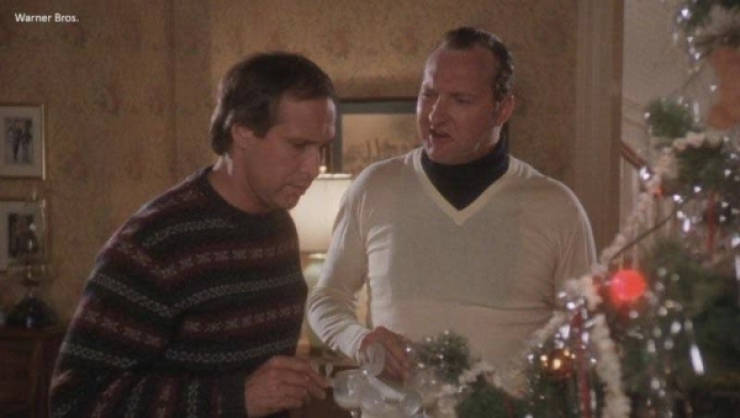 In National Lampoon’s Christmas Vacation, the outline of Eddie’s ‘mockneck’ can be seen through his shirt.