“Last July, a stray kitten came into my office and looked at me as if to say, ’You are my human,’ so I adopted her. Today, this happened. Guess now I’m an owner of another good girl.” 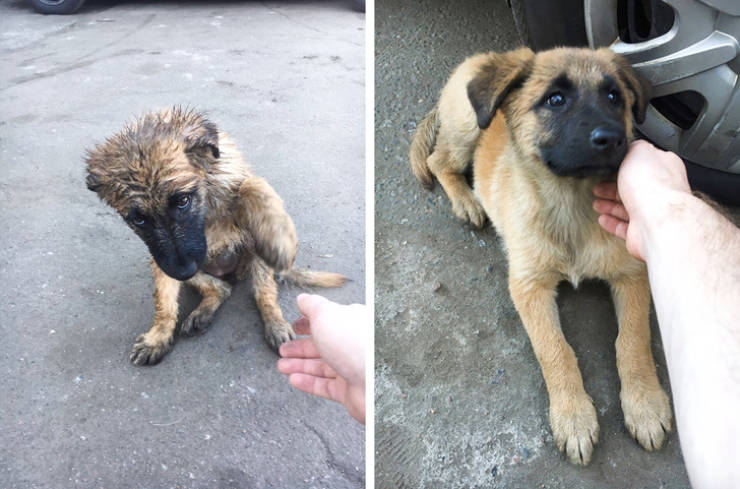 “No one wanted to adopt him because of his cropped ears and ’scary’ looking face. He had stopped eating and was severely underweight. Now Bronco is healthy, always smiling, and loved by everyone he meets.” 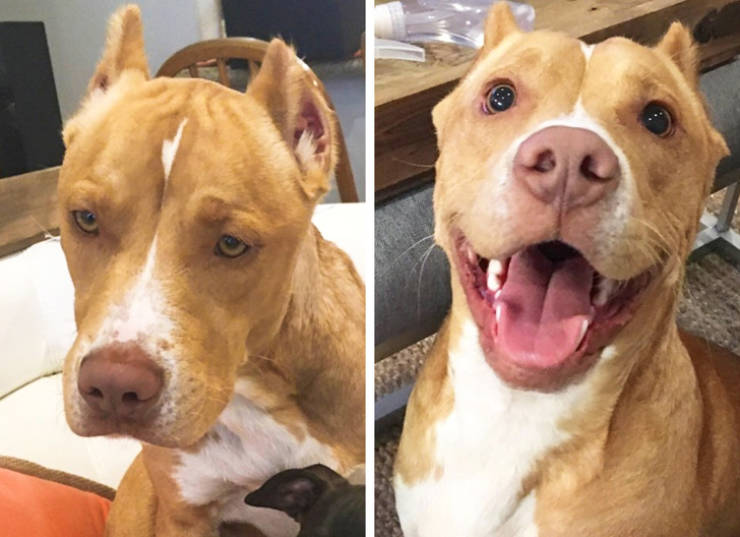 “Got him from someone who was neglecting him. He didn’t even have the energy to stand (left). Now, Felix is a very happy boy and loves to run around.”

“Meet Roxy. We’re her fifth home (for no reason except each of them had kids and had no time to play with or exercise a dog) and her last. She didn’t trust that we weren’t going to leave her for the first 2 days but now she knows she’s found her forever home.” 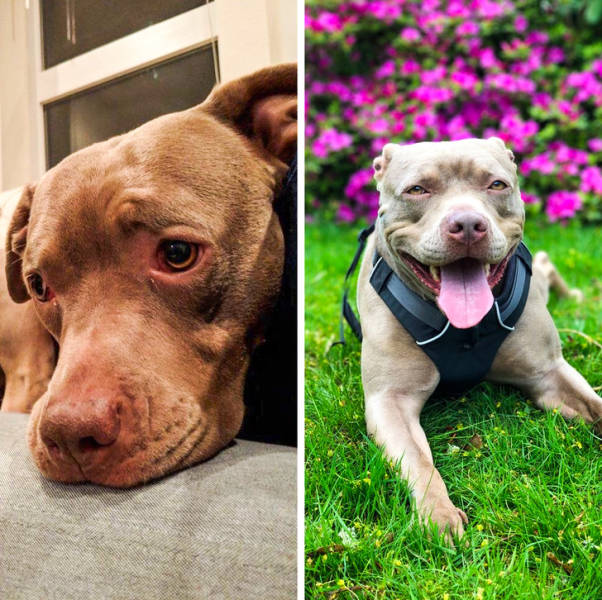 “My boy Roger at the shelter and then 7 months later” 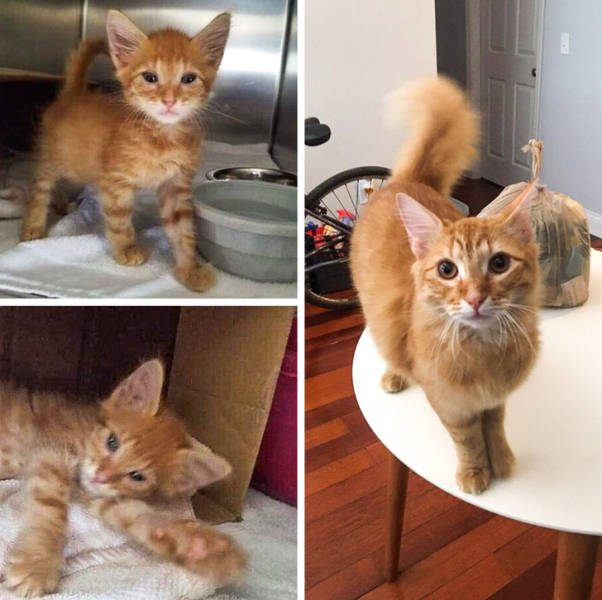 “Given up in 2016 for being ’too much work’ to being our goofy, sweet couch-hog and he just had his fourth birthday!” 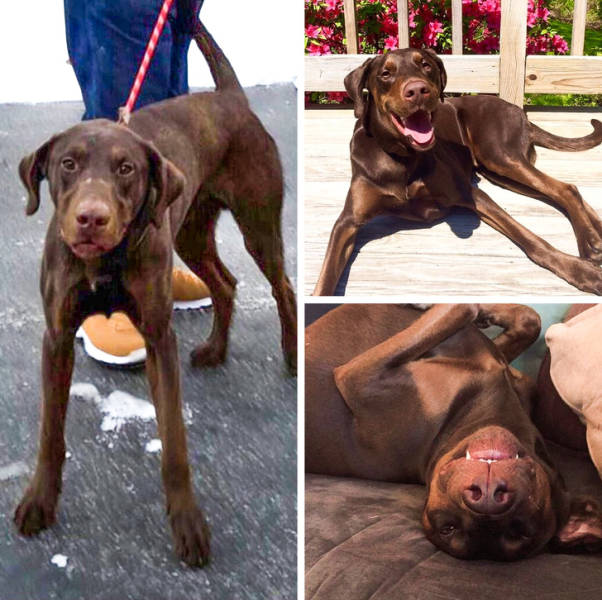 “His water hadn’t been changed in 3 years (which is why children should not have the sole responsibility of taking care of animals)! Popeye is now mine and happy that he can at least see out of his tank and have some new things to swim around!” 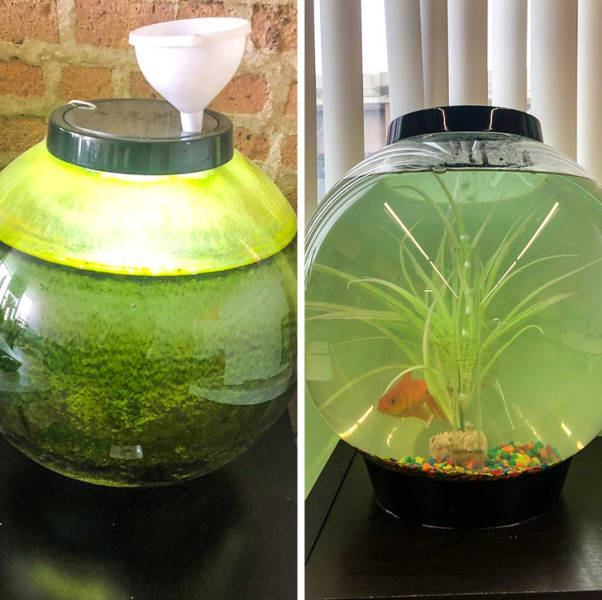 “3 years ago, Buddy was abandoned at a pig farm and mistreated. Nobody fed him for months until he was discovered and rescued. Now he’s a healthy bud in our family with a knitted scarf I made him!” 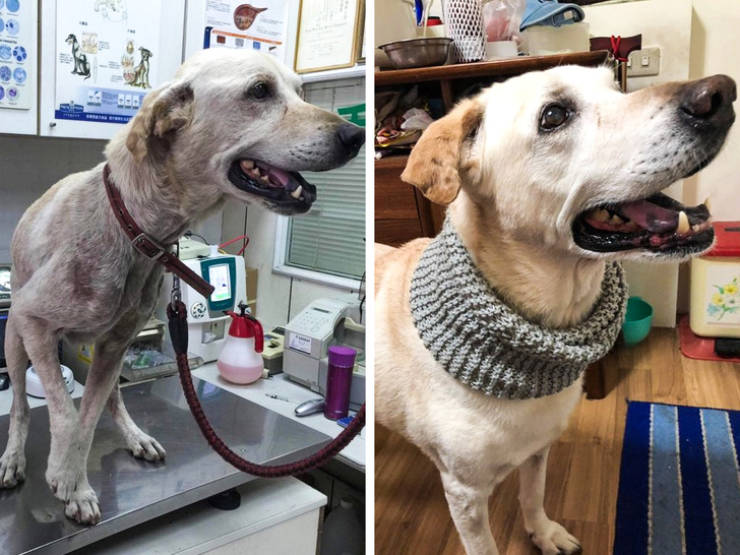 “Before and after a cat adoption: I fed him for 4 months outside then captured him. He was most likely left behind in my apartment complex by previous owners. He’s awesome.” 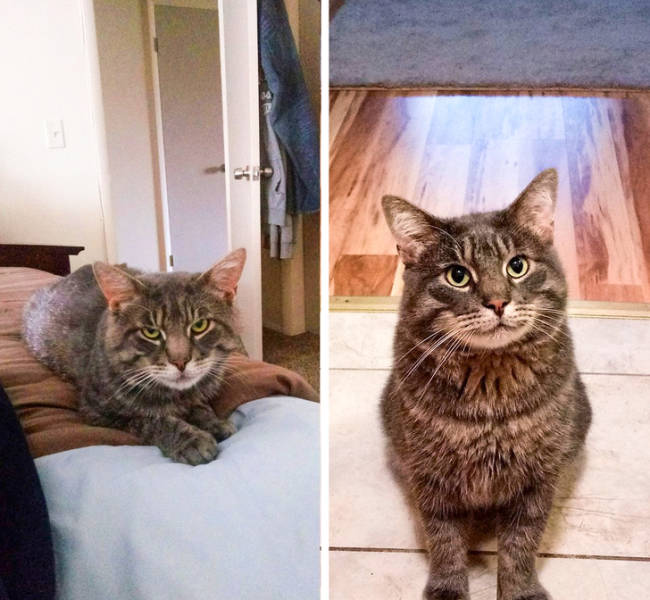 “Fed junk food and never given any exercise her whole life, Shiloh couldn’t walk more than 10 feet before having to stop and rest. 3 months later, she’s lost 30 pounds and can walk nearly 1 mile without stopping!”

“After being found in a dumpster, abused, and passed over for adoption for years, Oscar finally found his forever home and will never be abused again!” 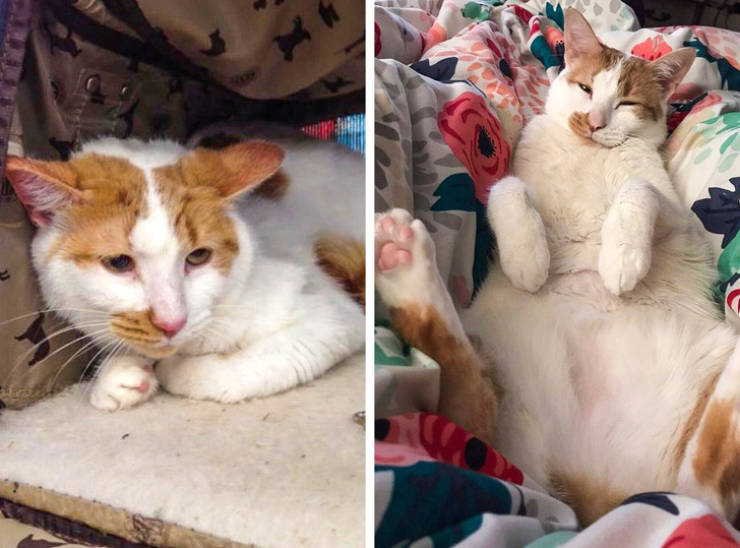 “We adopted this scruffy bag of bones a year ago. Now he’s our little angel!” 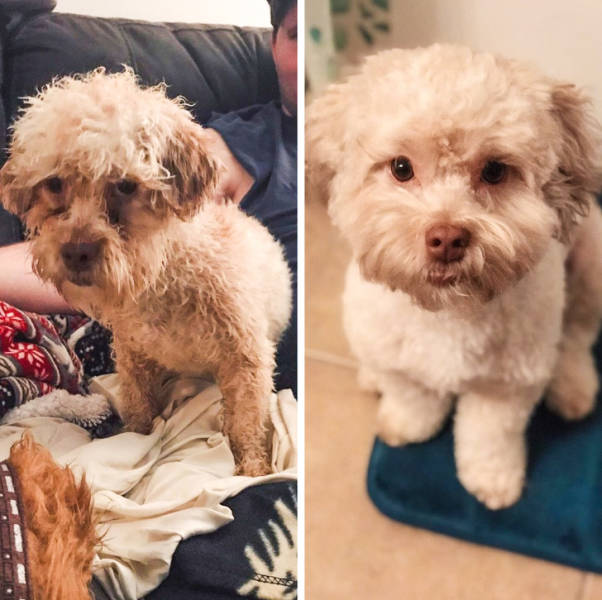 “Found malnourished and dehydrated in the Texas heat, she’s now a beloved part of our family! This is Shea before and after adoption, 6 months apart.” 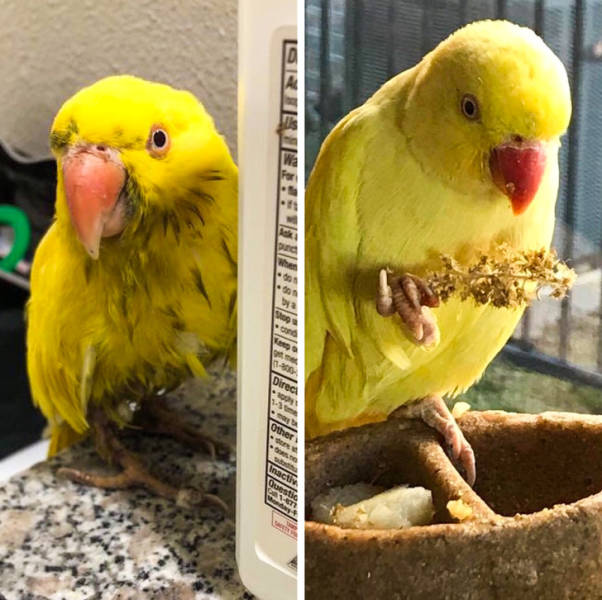 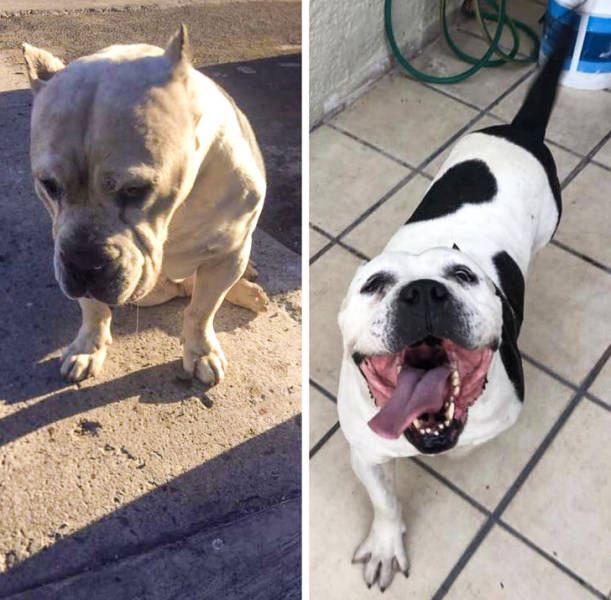 “Someone had put hot glue on this baby causing the hair on his nose and ear to burn off. The shelter told me the hair wouldn’t grow back but I didn’t care. 5 months later my baby got all his hair back.” 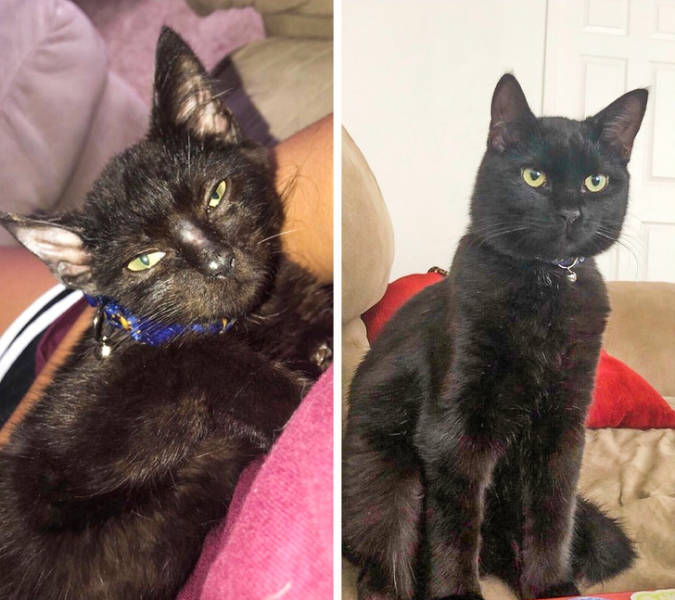 “This is my Koda Bear the day before he got adopted and a few months after!” 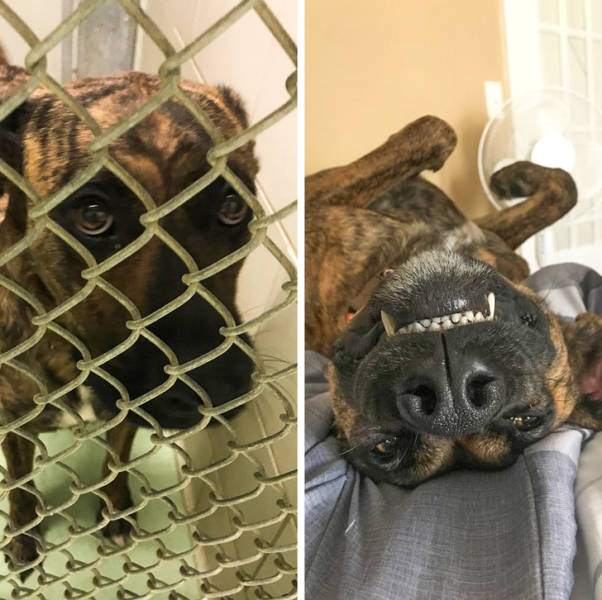 “My cousin saw this 20-lb senior cat available for adoption. After a year of love, dieting, and proper veterinary care, Roger has lost 5+ pounds. He’s still a big boy but he’s happy and active.” 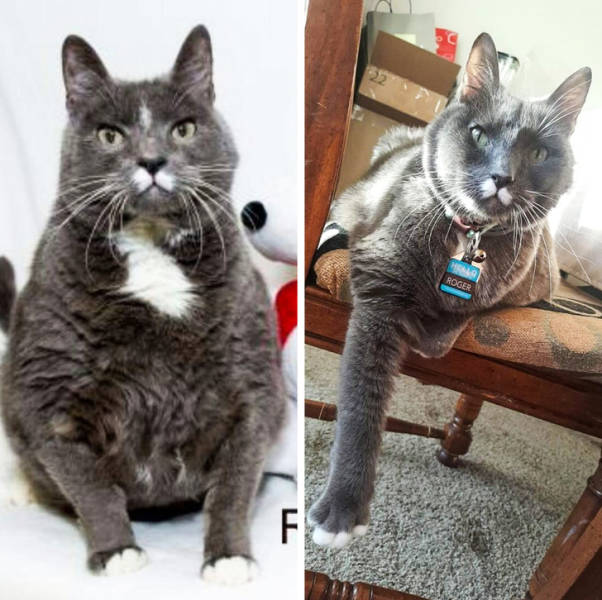 “Exactly one year ago, my girlfriend and I saved this sweet boy from a kill shelter. Kevlar was used as a bait dog and had his teeth filed down. He suffered a broken leg that healed on its own, awkwardly which led to arthritis at 2 years old. Today he is happier and healthier than ever.”

“One month ago, I found this baby in the wheel of my forklift at work. Now she lives at home with me. Meet Emmy!” 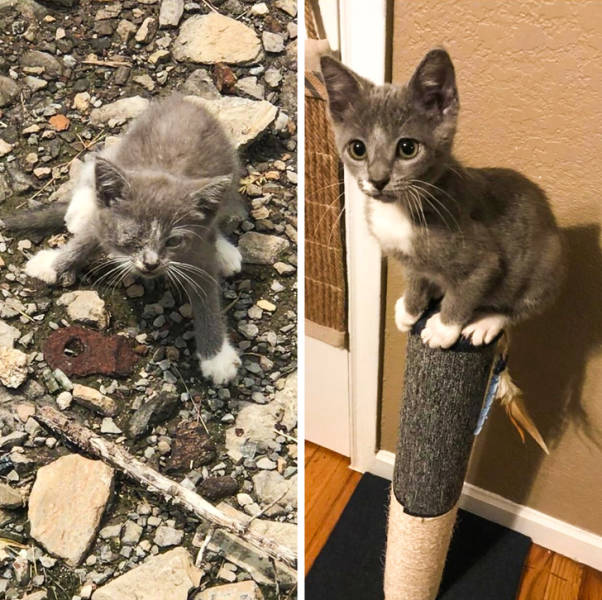 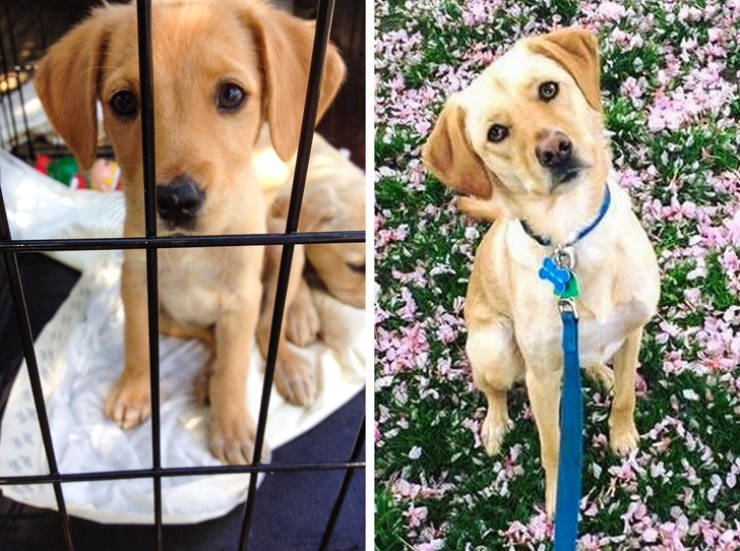 “After 4 years on the street, Annie found her home with my parents.” 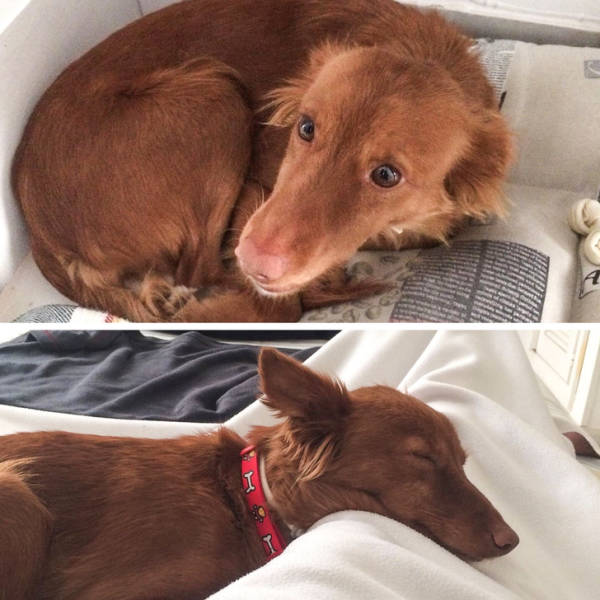 “I stroked this cat 6 months ago and every day it sat outside my building, curled up under the sun, waiting for more love. I can’t give it a home because it already has a collar but I try to pet him whenever I see him.” 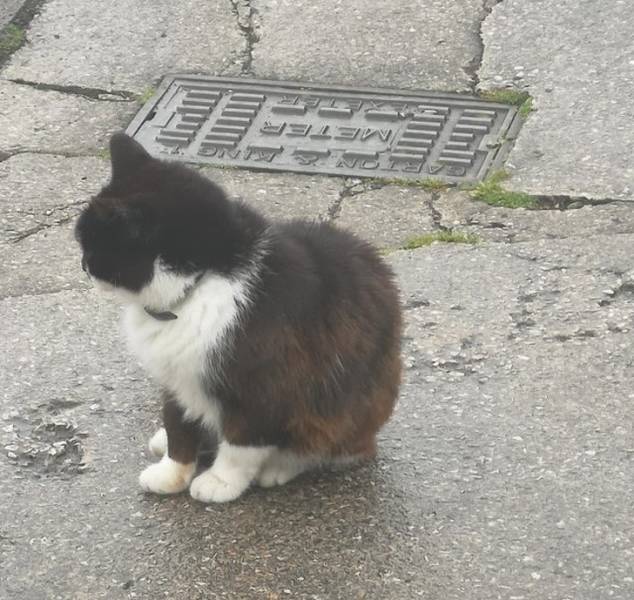 “Why do you want a stray cat? It’s going to be sick and unattractive,” they said. 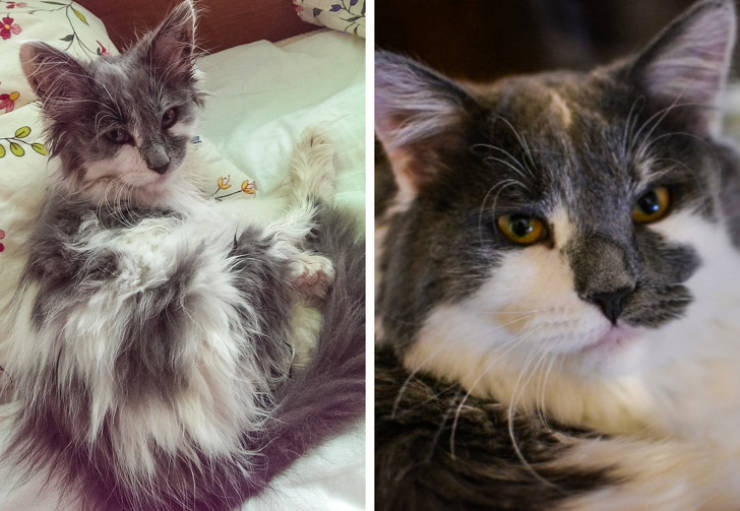 “It took 2 weeks just to hold them and another 1.5 months to make them friendly. But here’s the result!” 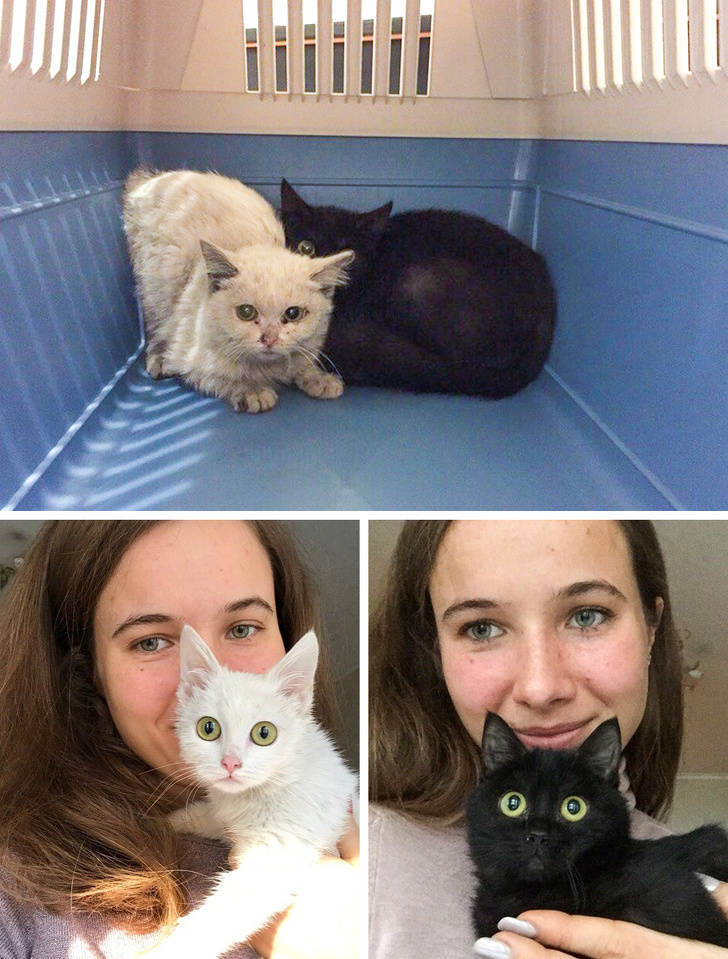 “Trojan cat! After seeing this stray little girl, I convinced my hubby we needed to adopt her ASAP. Once we got her home, 4 more popped out!” 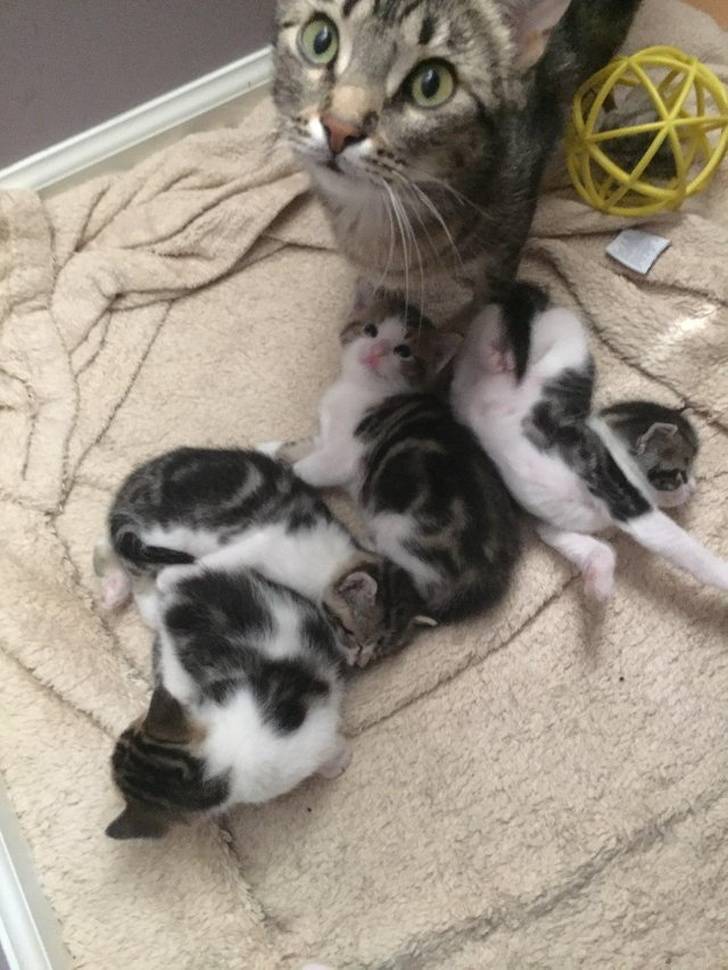