Celebs, That’s Not How You Change Your Style! (17 pics) 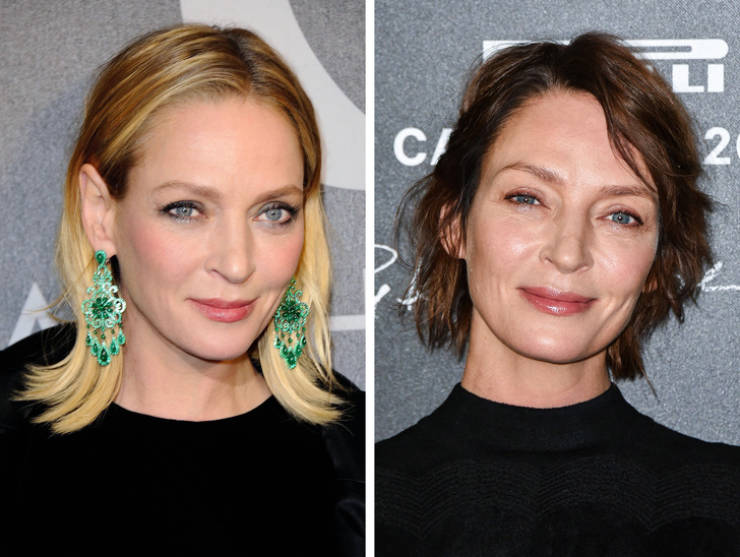 A couple of years ago, the actress surprised her fans by cutting her hair short and dying it dark. However, several months later, Thurman went back to her blonde hair, perhaps having decided that her experiment with her appearance wasn’t quite successful. 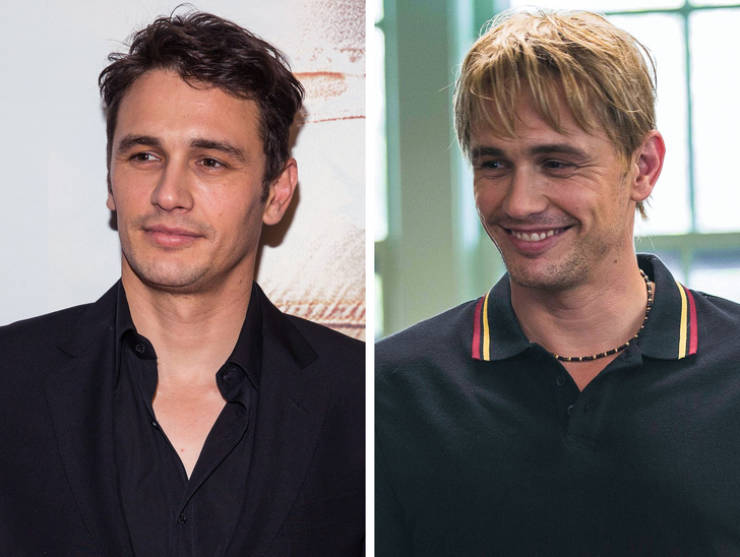 For his role in the movie, I Am Michael, the dark-haired James Franco had to dye his hair blonde for some period of time. Luckily for his fans who liked the actor’s natural style more, Franco went back to his initial style soon after. 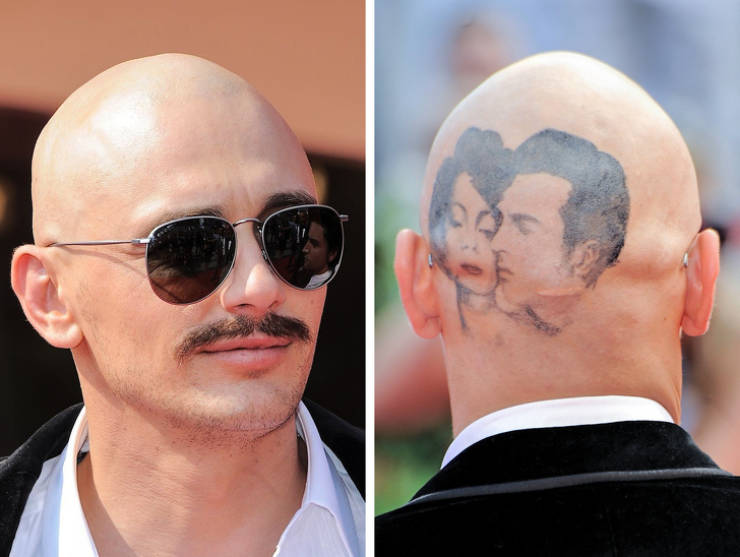 James Franco changes his appearance quite often and sometimes it’s due to pranks. For example, for his role in the movie Zeroville, the actor shaved his head. Later, he appeared with an unusual tattoo on his head at a social event. The actor’s fans kept guessing whether the tattoo was real or not but later, Franco confessed on his Instagram page that it was a temporary drawing. 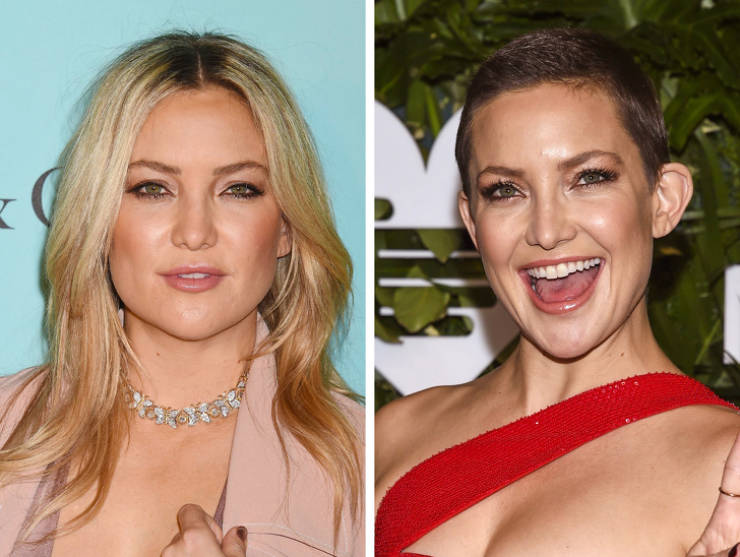 Last year, the actress shaved her head for her role in Sia’s low-budget movie, Sister. Never before has Hudson explored such a look. She has been wearing mid-length hair with a light hue for years. 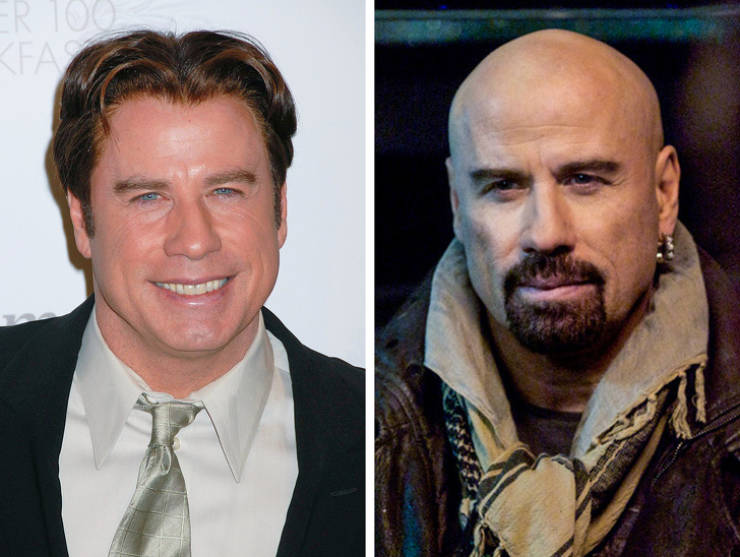 There are way more cases of men shaving their heads bald rather than women which is why we tend to get surprised less seeing men without hair. However, when John Travolta changed his style this way, it shocked his fans a bit. The movie, From Paris With Love was released in 2010 and the actor was bald and wearing a small goatee which made him difficult to recognize. 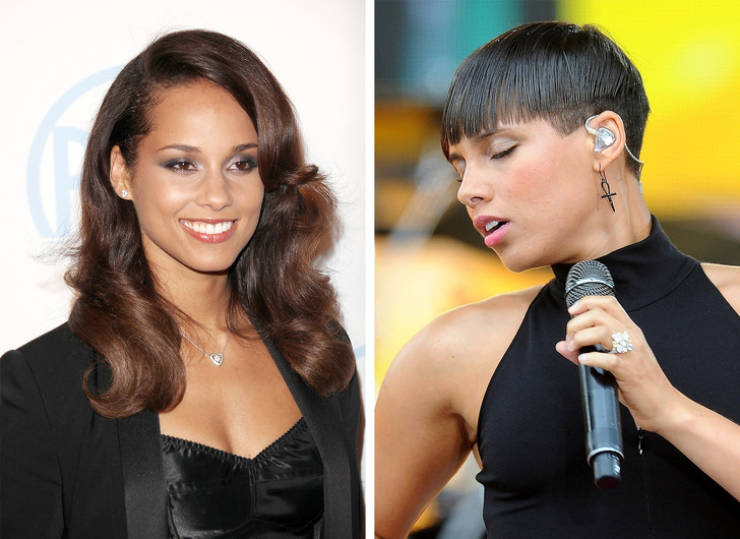 This singer is not afraid of boldly experimenting with her hair — she’s already rocked colorful braids as well as various asymmetric and short hairstyles. But still, when Keys decided to change her style yet again in 2013, many of her fans were surprised. People were comparing the singer with anime characters and The Beatles and still do today. 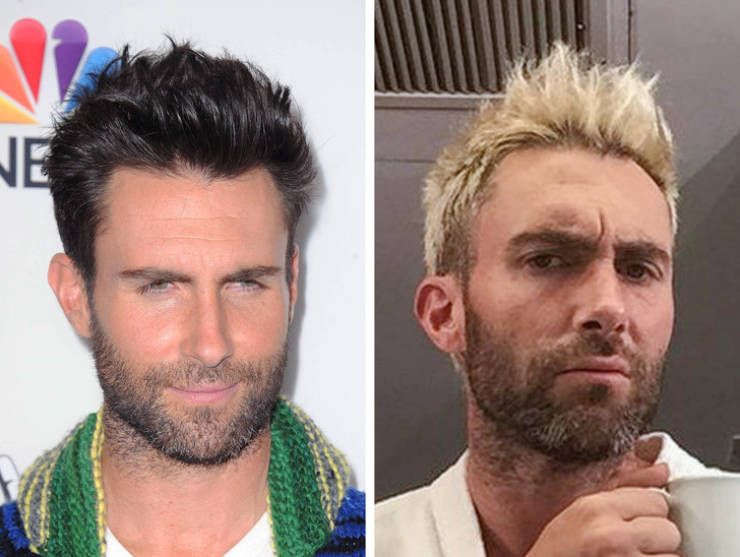 The frontman of Maroon 5 once decided to go blonde and we’re happy to say it looked okay. However, we must admit that Lavine looks way better with darker hair. By the way, he’s already gone back to his original hairstyle. 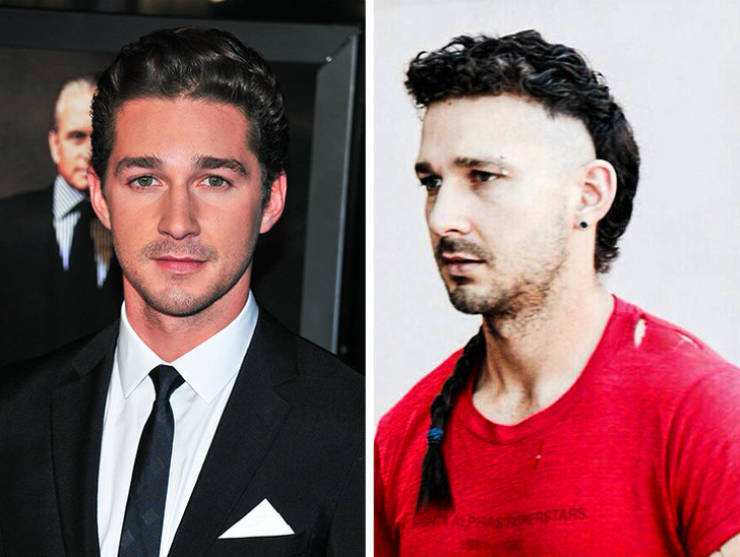 The actor decided to grow out his hair and don a beard. And it seems he may have overdone it with his hair because ever since, he’s been wearing a long braid. 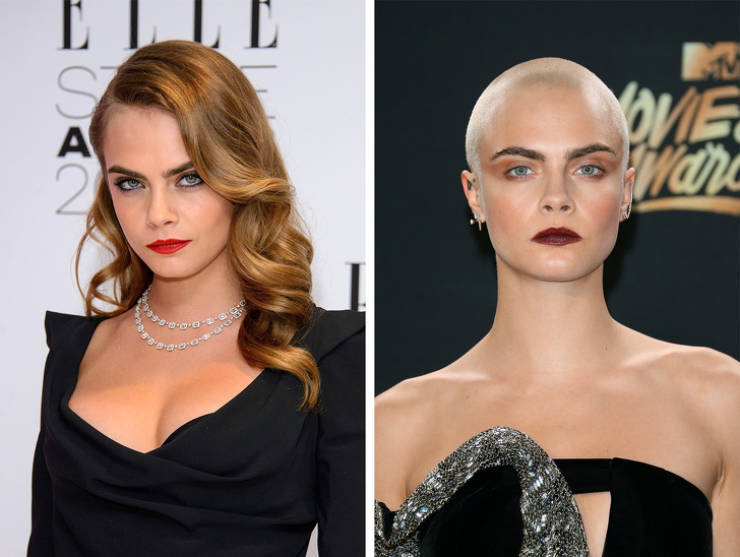 Working as a model is full of surprises: one day you’ll get to wear your hair curly and the next, those same curls will get heartlessly cut off. Moreover, if you decide to try yourself as an actress, the number of experiments with your appearance increases even more. Cara Delevingne, for example, had to shave her head for the role of a girl who was sick with cancer. Nowadays, her hair is growing back but who knows, maybe she’ll have to repeat the same look for the sake of art again! 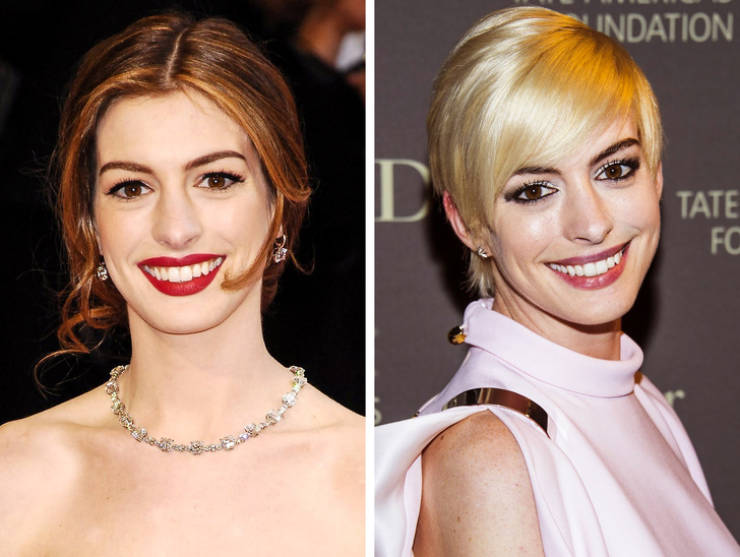 Anne Hathaway decided to go blonde in 2013 — that’s when she cut her long hair and dyed it. However, sometime later, she went back to her usual dark hair that suits her so perfectly. Recently, Anne decided to experiment with her appearance again. In the movie, Serenity that was released this year, she appeared with blonde hair again. Good thing her hair stayed long this time! 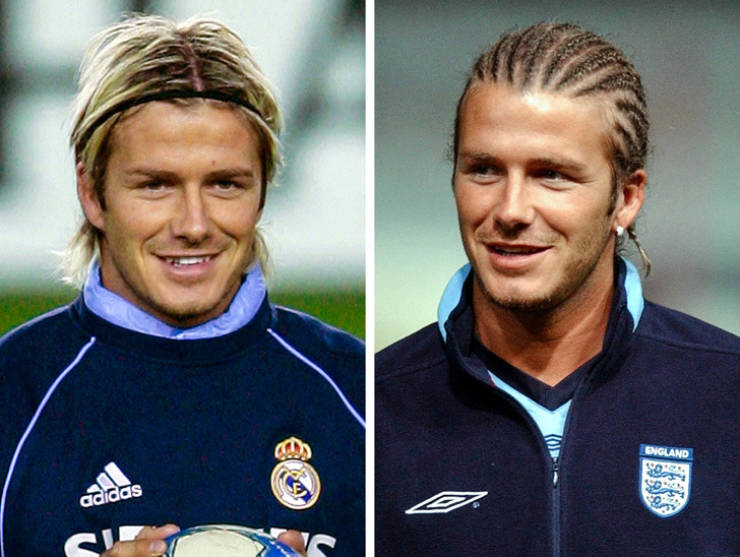 This athlete is not afraid to experiment with his hair — we’ve seen him with highlights and even braids. And in our opinion, the braids suited him the least. However, Beckham still manages to look stunning with them! 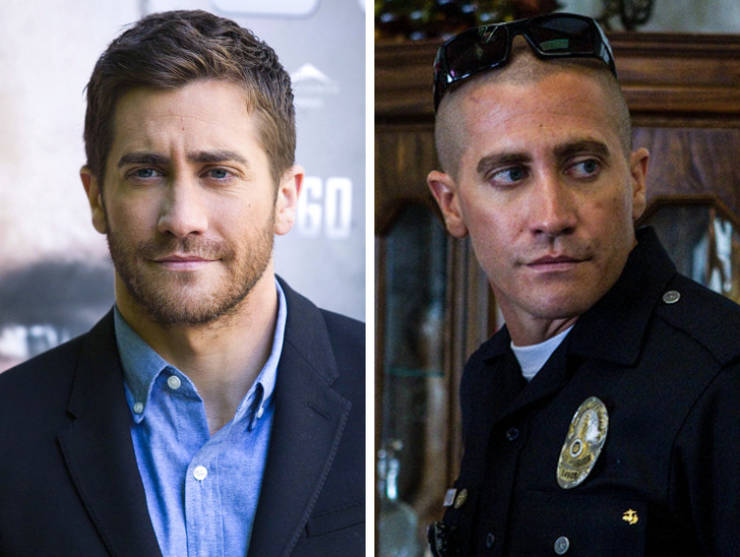 The actor shaved his hair before shooting the movie End of Watch where he played a policeman. However, the role didn’t require too many drastic changes from Gyllenhaal — perhaps he simply wanted those changes for himself. 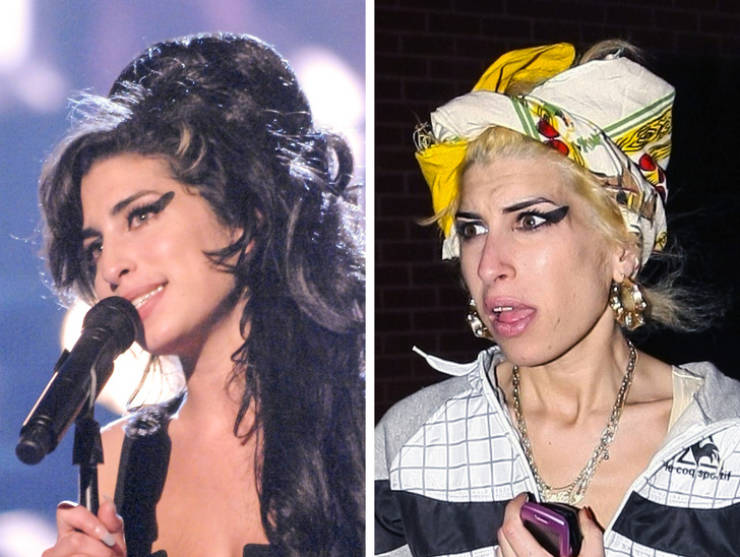 Amy Winehouse wore blonde hair for a short time. She decided to change her image after returning from vacation from the Caribbean Islands. Her reps declared that the actress simply wanted to look different at that time. Nevertheless, Amy bounced back to her original image quite quickly, though it was quite a shock for her hair. 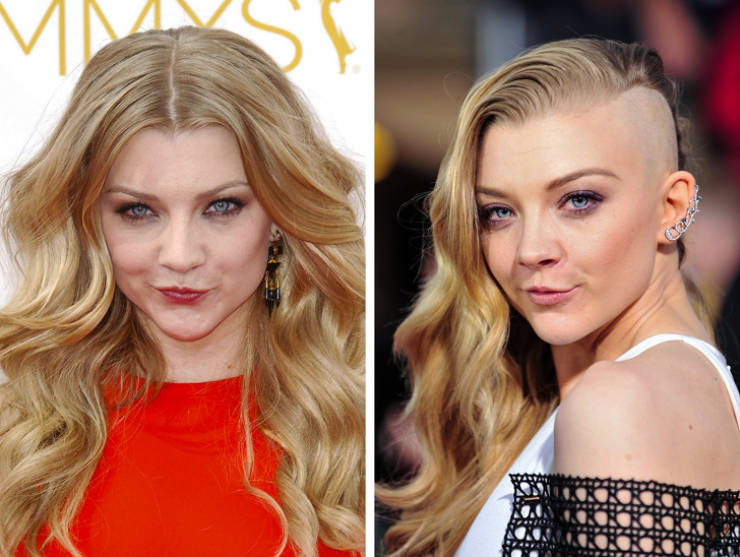 The actress appeared with quite an extreme haircut at a social event in 2014. At that time, she shocked her fans with the boldness of her image. Later Natalie confessed that she had to shave her hair for her role in The Hunger Games: Mockingjay. Since that time, the actress hasn’t changed that much. 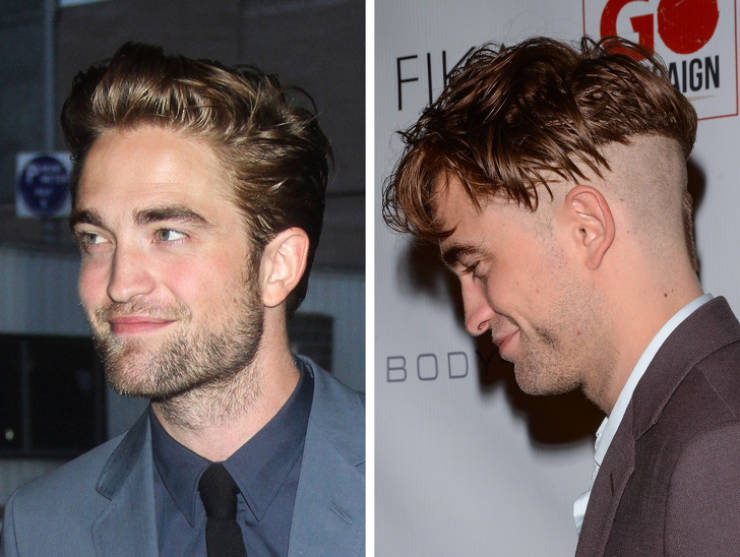 In the same year of 2014, Robert Pattinson also decided to experiment with his style. He got a creative and strange haircut that many people simply didn’t understand. At that time, the actor started to date the singer, Tahliah Barnett and people were speculating it was she who influenced such a change. 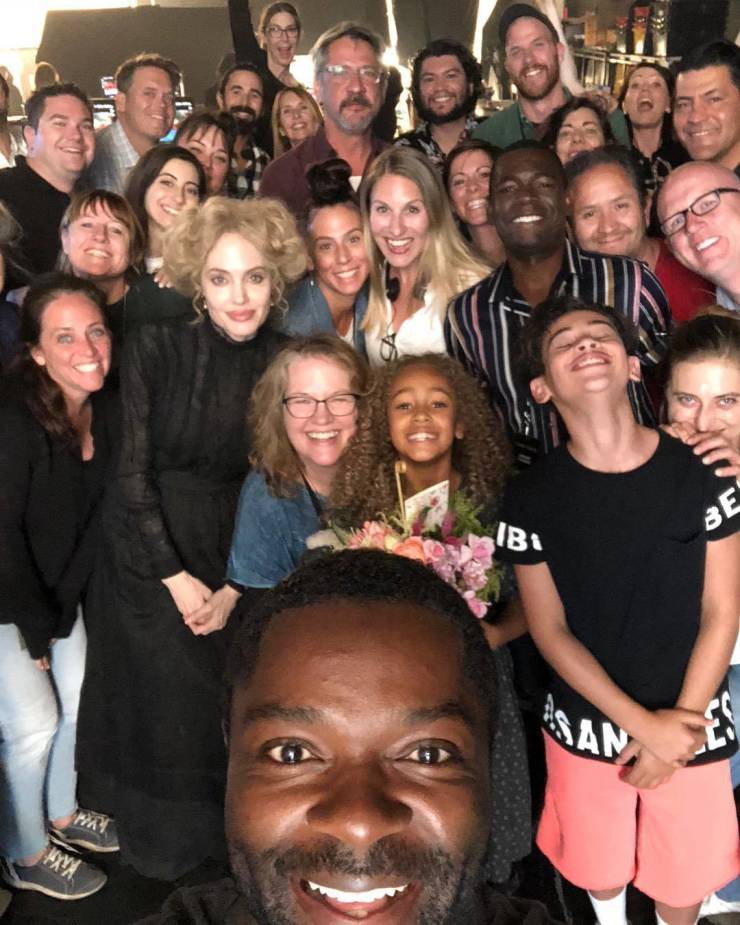 Recently, a photo of Angelina Jolie from the set of a film has been published in social media, showing the actress with lighter hair. No, Jolie didn’t become a blonde — it was just a wig from a movie! 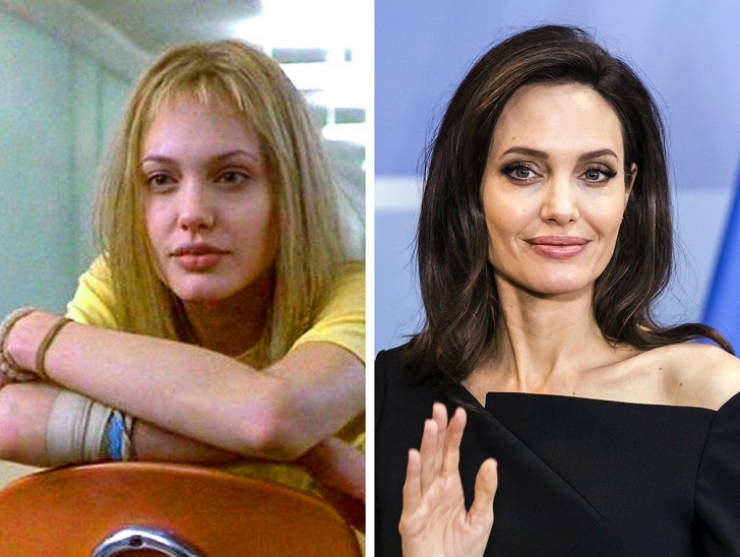 However, the actress has experimented with her appearance in the past. In 1995, the actress also had blonde hair which didn’t last for too long. And we think it was the right decision.